I have no returned from my holiday! Whilst there will be one or two posts about that to come, I spent some of the free time I had playing Four Against Darkness (sometimes in the darkness - one game was played by the light of a head-torch, albeit at the outdoor bar of a caravan park)

This post covers my first games. I'd run a few test room before we went away to get used to combat, mapping and the basic mechanisms, but these were my debut adventures.

Before we went away I expanded the monster, special event and special features table, increasing each to two columns and doubling the number of possibilities from six to twelve. I did this because the basic 4AD was going to be my main entertainment for two weeks and I wanted to maximise the possibilities in it. Some things were doubled up across both columns, where they seemed to be either key, or classic encounters - The Lady in White, for example, or Orcs, or the Small Dragon. Others were new inventions, with stats derived from the existing encounters. You'll see mention of them in these reports, so if you think 'That's not in the basic game', it isn't. I may post some of my additions in another post. The nice thing about 4AD being a solo game is that if a new thing didn't quite make sense in actual play, I could adjust it on the fly. My player (me) didn't mind.

On the adventures. For my first delve I put together a classic D&D foursome - Lana (Fighter), Brother James (Cleric), Gildor (Rogue) and Blokear (Wizard). They entered The Stunted Tunnels Of The Final Binding (thank you to Boardgame Geek for providing a random dungeon name generator).

The party were confronted by two passages, both heading north. The chose the eastern one, and immediately ran into a goblin lair. Keen to test their mettle they dived straight in, Brother James felling five of them with one sweep of his maul. The rest of the party swiftly dealt with the other four goblins, and they picked up their first treasure - a gem. 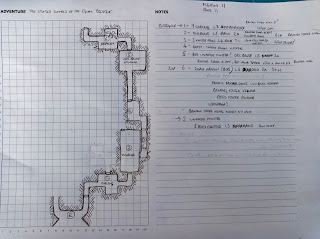 They pushed on, and Brother James was magnificent in the next room, smacking an owl-bear in the head and causing it to run away. The room after saw Lana deal with some vampire frogs single-handed. The party picked up a few gold pieces and some jewellery.

The next room appeared to be lived in, but unoccupied. As the adventurers searched it, they were surprised by the owner - a massive orc. Despite the surprise, Blokear the wizard managed to score a telling blow with his staff, which so surprised the creature that it failed to see Lana slip past his guard and run him through with a single thrust of her sword.

The party's confidence was high as they pressed on into the next chamber - and found the lair of a small dragon. Looking for another easy win they charged straight in - and got slaughtered. Gildor fell to the dragon's breath attack, whilst Blokear was bitten in two. Lana and Brother James barely escaped with their lives. Injured the stumbled out of the dungeon, their escape being briefly hindered by a wandering band of Death Cultists.

So all in all my first game was a bit of a disaster. An unprepared party, mostly at Level 1, just isn't a match for a dragon. Brother James was now at Level 2, but they had very little gold to show for their first descent into the darkness.

After a period or recovery and mourning, they recruited two more adventurers, Berrimah (barbarian) and Palmerston (halfling). They sought out The Forsaken Mausoleum Of The Insatiable Hunger, and in they went. 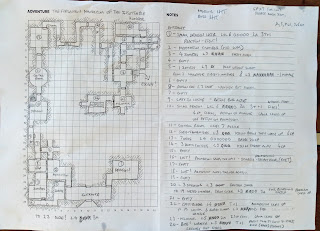 I'll summarise the expedition - it went well. You can infer most of the details from the write-up to the right of the map if you choose. The first room the party walked into contained another dragon. This time those chose to see what the reaction would be; it attacked them. So they raised shields, survived one blast of fire, and fled. The next route they took developed into a linear dungeon, which raised a lot of concerns about how they'd get back out of it after defeating the final boss monster. The party plodded onward, defeating the foes they came up against, and levelling up nicely. They met a ghostly lady who asked them to bind and capture the spirit of her husband, with the promise of  great reward. They said they'd try. Moving on, the lucky halfling Palmerson, who had already saved the party twice when they'd become disorientated in the lantern-lit gloom, found a secret stairway that led to the surface. This would be their route out of the dungeon. Not long after wards they found the Lady in White's husband - a wraith and the final boss of the dungeon. Deciding that binding and subduing him, then dragging him through half of the dungeon bck to his lady wasn't worth any reward, they simply (and ruthlessly) killed him, took his stuff, and escaped.

The party was all Level 2 or 3 now, so starting to move outside the level of the challenges in the basic game. I sent them on one more expedition into The Shunned Iris Of The Executioner. After exploring an extensive dungeon, and pretty much walking with ease through every challenge thrown at them, they found that the final boss was another dragon whose lair actually lay off the entrance chamber. They killed it and took its stuff. 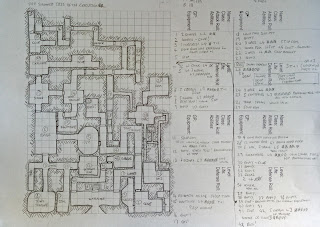 In future adventures, Lana, Brother James, Berrimah and Palmerson will now have to face a more challenging set of encounter tables, designed for higher level characters. The games I played later in the holiday featured a different set of adventurers, and there are tales of disaster and glory to tell. But that's for another post.