Event During The Siege

This was our group's second go at The Pikeman's Lament, and we used Gary's lovely 17th century figures. Caesar and I took the Polish and Imperialist commands, whilst Gary and Daniel ran an Ottoman command each. We had to seize the redoubt in the centre of the table. The Turks had to destroy half of our force.

The Imperialists advance past a farm. Their commander was impetuous and ready for a charge straight at the Turks. 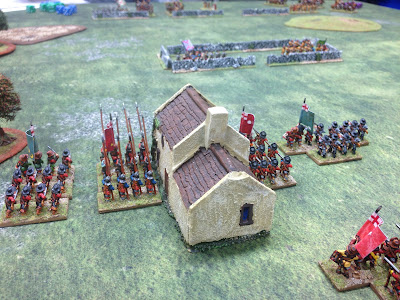 The Poles showed a lot of promise on paper, but were hesitant to move in support early on. One of their Tatar units even deserted*. 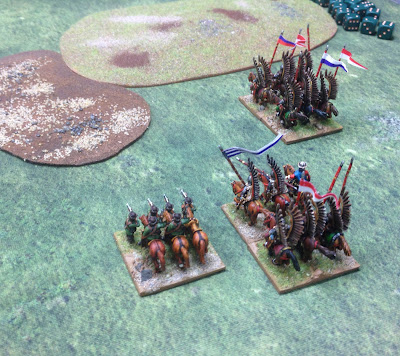 The defender of the redoubt looked confident, with good reason. The rest of the Turks left the main defences to support them, as the Allied attack stumbled around. 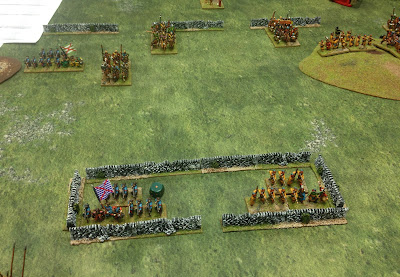 The Imperialist pikemen charged the redoubt, were repulsed and then promptly routed. The surviving Imperialist troops - all musket-armed - opted to just shoot at the defenders from then on, hoping the Poles would come to their support. 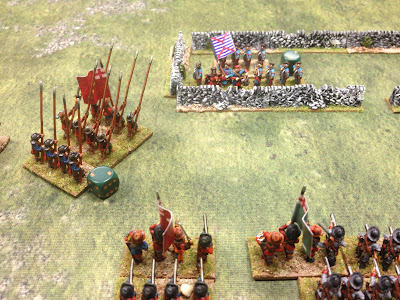 The Poles finally got moving, but there were now lots of Turks before them, and they had good ground to defend. 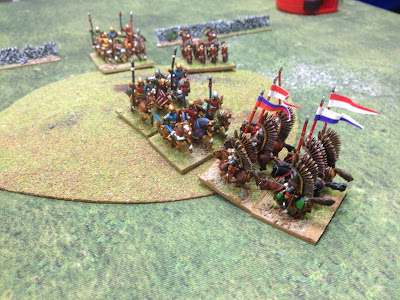 The winged hussars charged, and charged again, but the Turks held. One Polish unit suffered the ignominy of being charged by skirmishing traitors. 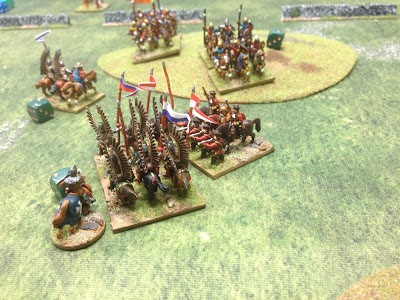 The Allied force collapsed, having barely troubled the redoubt. The Turks won a decisive victory in this skirmish.

The Allied attack had stalled from the first turn, with Caesar rolling two double-one random events on the first two turns, and the Imperialists losing their general in the first proper attack. By the time our force really got going, the battlefield was full of Turks defending hills and the redoubt, and our attack was doomed. Bu it all looked lovely.

Technical Details: Each player commanded 24pts, and rolled their own activations. We used 15mm figures and converted inches to centimetres. The Scenario was Storming The Redoubt, straight from the book.

*Caesar rolled the event where a single unit was pulled out of the battle. A couple of turns later Gary rolled an event where the Turks gained a unit. The lost Tatars were the only figures available for this bonus, so they reappeared on the Turkish side.
Posted by Kaptain Kobold at 20:03