Having played Lion Rampant and Dragon Rampant in recent weeks, we've been keen to complete the trilogy and give The Pikeman's Lament a go. However at present none of us really have much in the way of suitable figures. Caesar decided not to let that stop us having a go, and put together two suitable forces from his Napoleonic Austrians for a small-scale hypothetical Hungarian Uprising kind of game. Whilst we know that people have done Napoleonic and black-powder variants for the Rampant games, we wanted to play the rules as written, even with a game set well outside of the period.

Both sides consisted of 24pts:

For the first game Daniel and I played the Ga Pa scenario, which is a straight head-to-head fight. We had intended to include special missions, but we forgot in the excitement of setting up and determining leader characteristics. However we decided to keep going, since really we were just trying to get a feel for the different troop types. 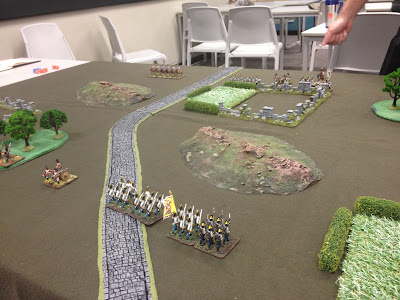 Daniel's troops had a nice 'fortress' of stone-walls before them, and a leader dedicated to getting his men to shoot well, so I decided to hide my infantry behind a hill until I had secured an advantage elsewhere. 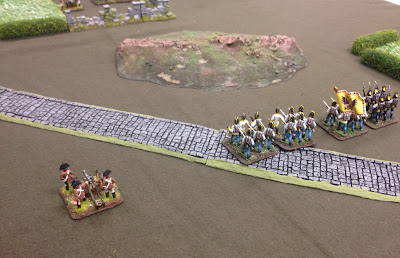 To this end I used the cavalry and light infantry on my left to try and turn his flank. Daniel countered with his cavalry. 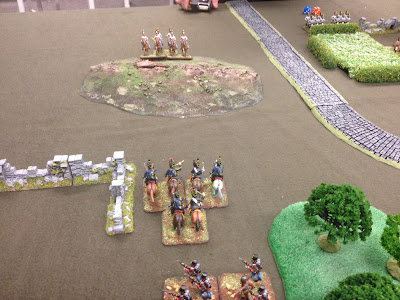 Our first fight! It ended in a draw. 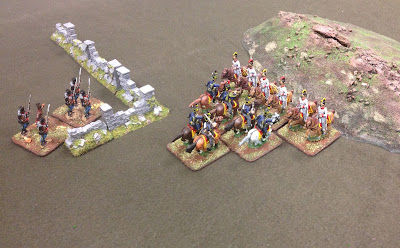 As Daniel's cavalry fell back, my light infantry took out a few with musketry. Daniel brought up some line in support. These drove off my cavalry and managed to take out the lights as well, leaving me in a rather exposed position. 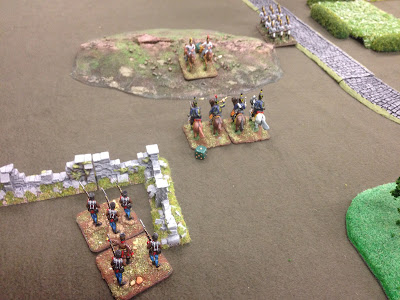 He also sent his own light infantry around my flank, to pester my hidden line. 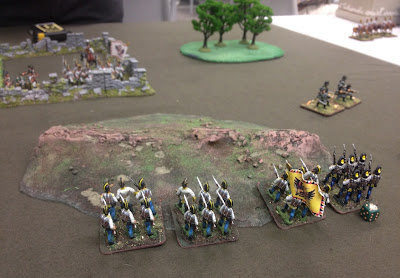 My officer was a duellist, and since we weren't playing the rules with any changes, I was able to challenge my opponent. He fell, but it didn't cause a single unit in Daniel's force to waver. 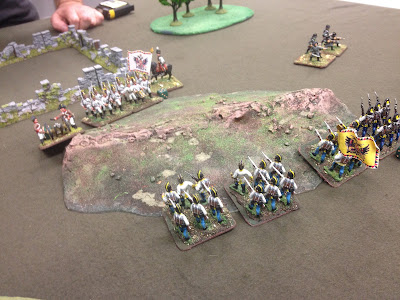 A fumbled activation did see the leader's unit fall back. We reasoned that they'd forgotten to check the pockets of their fallen commander for small-change.

Daniel deployed his cannon on the hill. 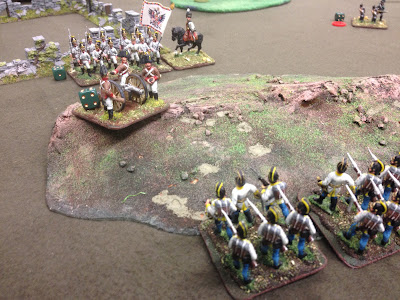 I was then just overwhelmed by firepower, followed by a close-order bayonet charge. Daniel picked up a convincing win, mostly through excellent activations when he needed them. 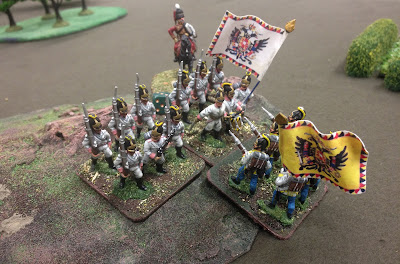 For the next game Caesar played Daniel, and we randomly determined it would be the River Crossing scenario. Both sides are patrols trying to get more of their force onto their opponent's side of the river than their opponent manages to their's.

(We didn't have any river with us, so used the road pieces) 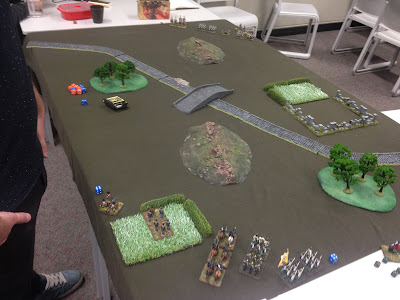 Daniel went for the obvious rush across the bridge in the middle. 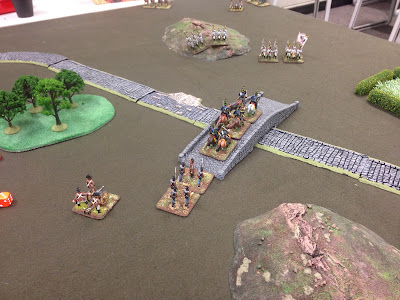 It ended badly, as Caesar cut his men down. 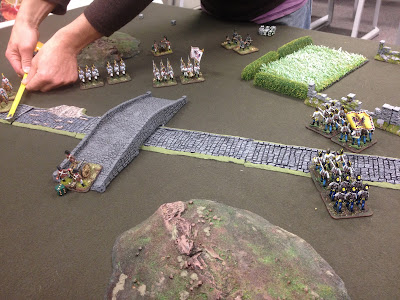 However this opened up a subtle chance for a win for Daniel. The victory conditions are that the game basically ends when one player has all of their troops on the opposite side of the river. It's then scored on their points value. With a lot of his force gone, Daniel was well-positioned to get both his infantry across (12pts worth) whilst Caesar had still only crossed with 4pts of cavalry. 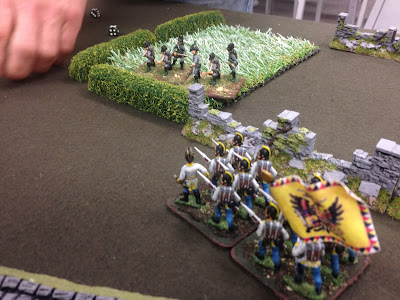 Caesar countered with a devious move, bringing his light infantry into the open and using the enemy proximity limit to block Daniel's troop from advancing out of the river. Obviously they could attack, but it bought him time. 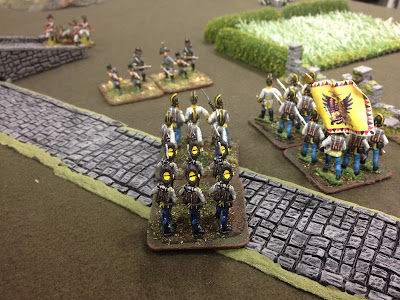 And time was all he needed. Daniel's bold crossing stalled, whilst Caesar got more of his troops across to secure a win. 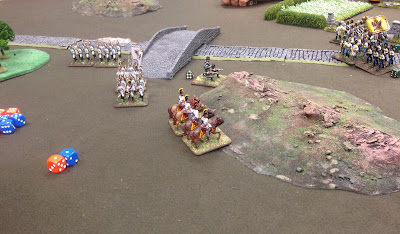 We were really impressed with how well the game worked; firing is deadly, but sometimes hard to activate, whilst the 'plug bayonets' rule allows infantry to switch from shooting to close combat fairly readily. As a game of 'conventional' Napoleonic-era skirmish it would probably exclude too much of the chrome people would expect from such a game, but for low-intensity warfare, or actions in eras or theatres where troops were a little more irregular or poorly trained we thought that it might work quite well. I'd be inclined to drop the officer duels, which would mean a tweak to some of the officer abilities and special missions, but it wouldn't be hard to include ideas from some of the other sets.

That said, we're keen to put together forces for the actual era for which the game was written.

Thanks to Caesar for putting on the game.

The Rampant system is an addition to my Six by Six Challenge.