We played Mighty Monsters / Samurai Robots Battle Royale this evening. Originally it was to be just Caesar and I, and I'd worked out a simple scenario involving one person playing two monsters, and the other two mechs. However Satvik joined us, and Caesar hit on the idea of each player running both a monster and a mech; the player was trying to destroy a specific building in the city with their monster, whilst using their mech to stop the monsters of the other two players from doing it. Monsters could not fight monsters and mechs could not fight mechs.

We also ran each mech/monster pair as a single entity for activations; if you caused a turnover moving one before the other had done anything, tough luck.

We randomly determined what we'd use. In terms of monsters, Caesar got the slow but tough Mogul, Satvik got the multi-armed horror Ashura and I got Godzilla (portrayed by a newly printed model of the 2014 version). 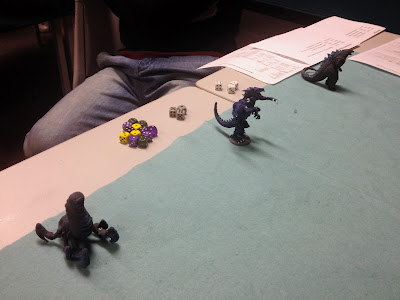 The mechs - Pacific Rim jaegers, of course - were Cherno Alpha (Caesar), Striker Eureka (Me) and Gipsy Danger (Satvik). The target was the sandstone capitol building with the green dome. 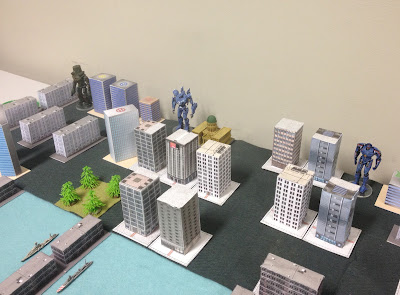 Godzilla and Ashura closed on the city fairly quickly. Striker Eureka took up a good position ready to fire volleys of missiles. 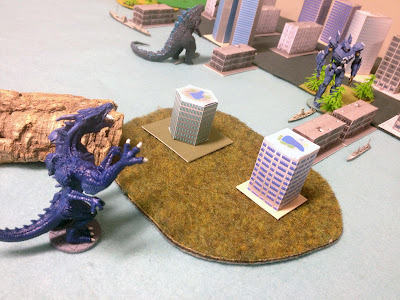 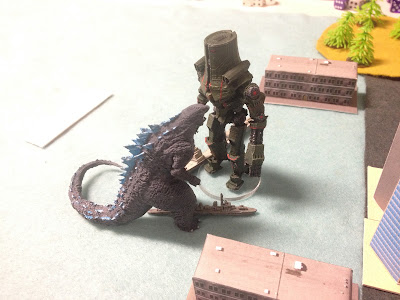 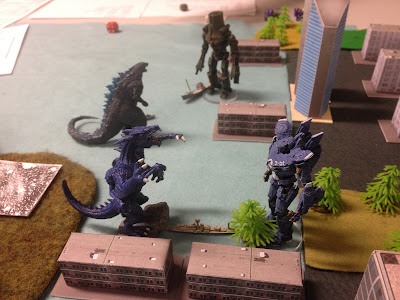 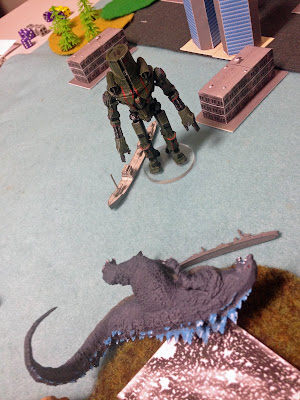 Mogul had advanced slowly, but Gipsy Danger had been content to wait. Eventually they met, Mogul wielding a ship as a club (somehow). Everyone had a lot of fun using ships as clubs; 'Pacific Rim' has a lot to answer for. 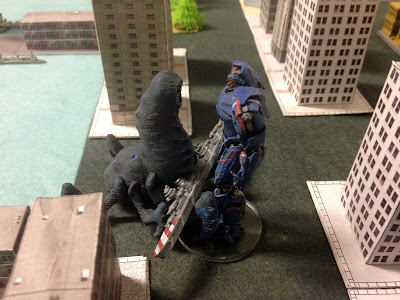 Ashura went berserk, closed the range and went for a melee attack. And fluffed it. 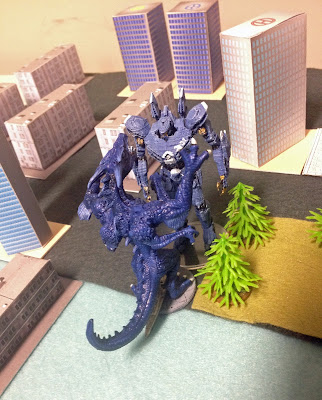 It was too badly wounded from multiple missile strikes and one very well-aimed tree. Ashura collapsed, out of the fight. 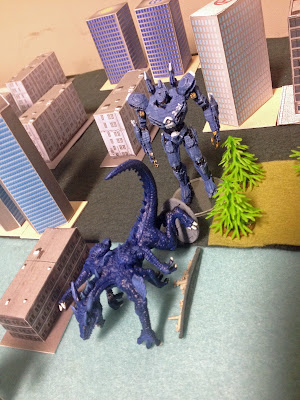 This left Striker Eureka free to assist Gipsy Danger against Mogul. The Australian jaeger waded in brawling, punching the monster into submission, knocking it flying into a building and finishing it off with a short-range missile strike. 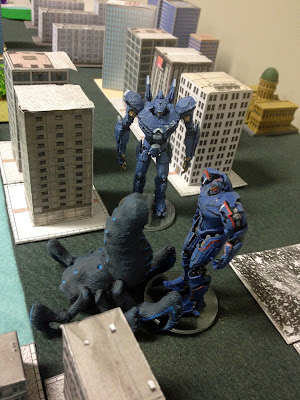 Godzilla resumed the attack, but stumbled from the damage he'd taken. However the actual attack badly damaged Cherno Alpha, melting off an arm with the last of his radioactive breath, and destroying the mech's sensors. A final blow destroyed the power-plant, disabling the mech. 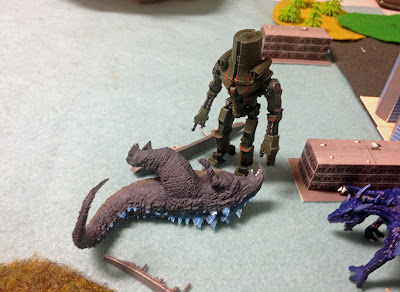 Cherno Alpha had seriously hurt Godzilla, though, and it took little effort for Gipsy Danger to finish him off. 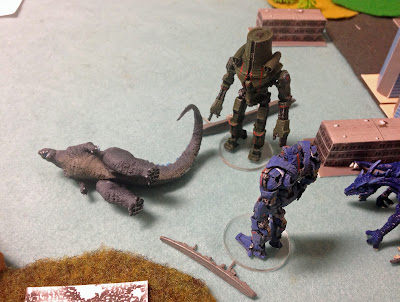 All three monsters were taken down, for the loss of just one jaeger.

This was a fun game and we managed to get through it without too many mistakes. Everyone seemed to enjoy themselves, despite the rather poorly conceived victory conditions. If we did this scenario again we'd have the monsters simply scoring points for destruction in competition with each other, whilst each player used their mechs to prevent it being caused by the others.