Ambush In The Azores

I've thrilled you with how I made and painted my ships. Now the actual point of the exercise - playing a game with them.

The mighty Portuguese galleon Nossa Senhora da Guia has returned from The Indies, laden with treasure and spices. She is met by two escort brigs, for these waters, although close to home, are not safe.

The galleon and its escorts, Flor de la Mar and Cinco Chagas work their way through some reefs before heading out into the open ocean. But on the distant horizon can be seen the sails of two English predators; the fast galleons Popinjay and Auk of Onan. 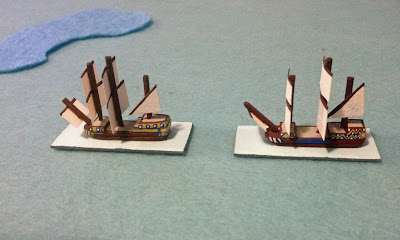 The Portuguese escorts turned to intercept the English. Whilst weaker than them they could hold or damage the galleons whilst the larger Nossa Senhora da Guia completed the manoeuvres necessary to get past the shoals and islands. 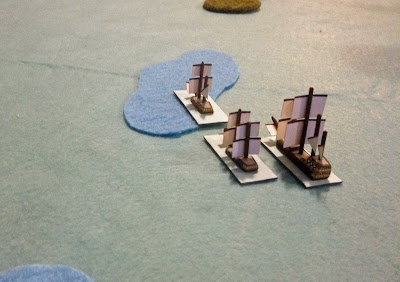 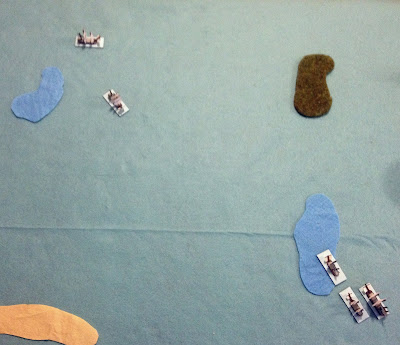 First fire! The Popinjay tried the range with its bow chasers.

Cinco Chagas returned fire with a broadside. At this range the fire was ineffective, however. 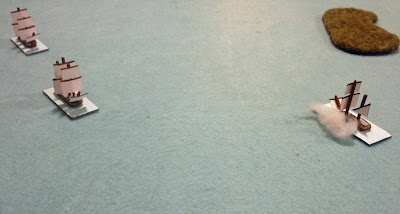 The English bore down quickly on the smaller Portugueses ships, whose crews panicked, firing wild, uncoordinated broadsides instead of reserving their fire. 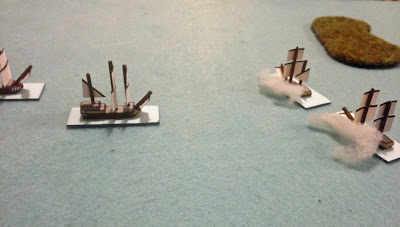 The Nossa Senhora da Guia made heavy weather of the channels, missing the ones through the shallows and being forced to pass close to the northern island in order to round it and reach safety. 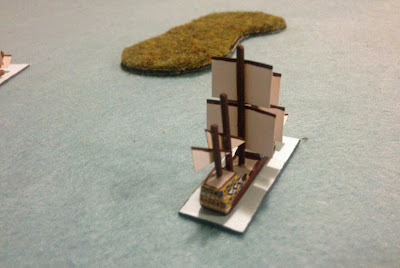 Meanwhile the Portuguese failed to take advantage of a perfect point-blank range shot on the Popinjay. 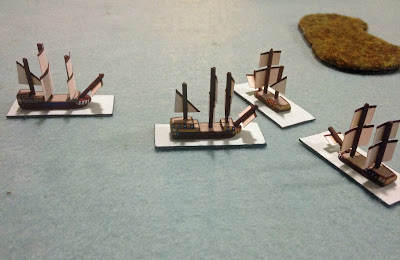 The English reactions were little better. The Popinjay fired a wild broadside, but at close range it was enough to damage Flor de la Mar. 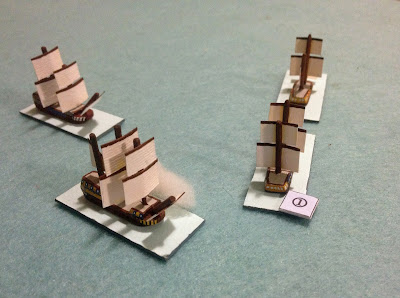 However Auk of Onan collided with Flor de la Mar, and both ships took considerable damage. 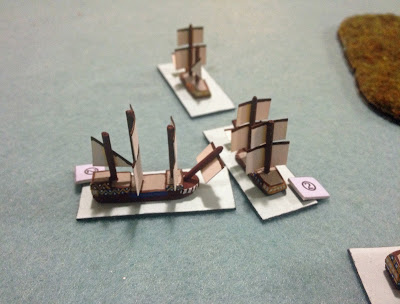 Flor de la Mar fired a full broadside at the English ship before slipping away. Auk of Onan was now crippled, with damaged rigging as well. 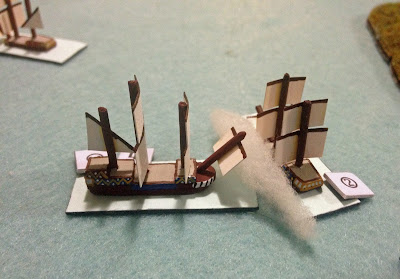 Nossa Senhora da Guia ran too close to the island, and almost tore its bottom out. 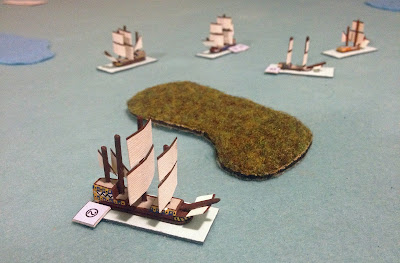 It continued its perilous pass, as the wind backed rapidly, changing direction faster than the sluggish galleon could respond to. The crew desperatey pumped water from the hold and repaired damage. But as the mighty galleon turned to the west and its run for safety, it was already crippled.

In the distance the English ships passed through the channel. Popinjay turned in pursuit of the the Nossa Senhora da Guia, whilst Auk of Onan attempted repairs. 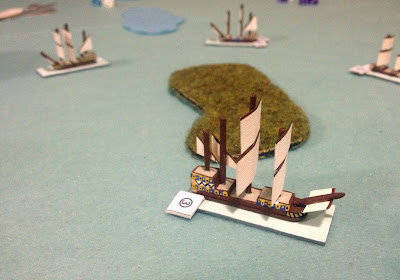 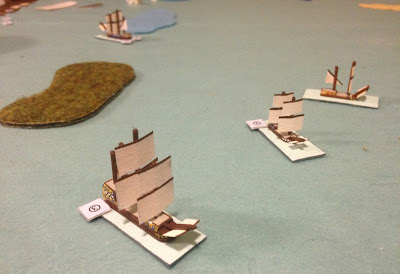 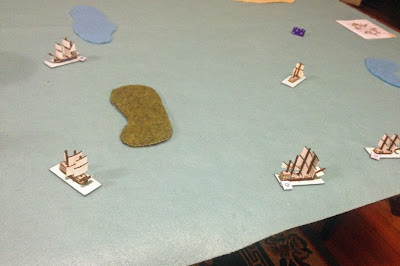 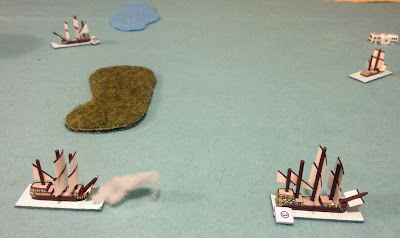 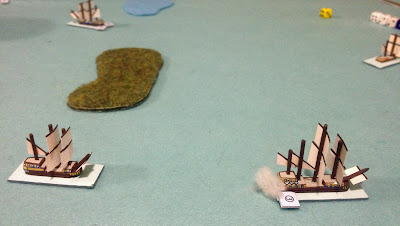 The crew of Flor de la Mar panicked and sailed out of the action. 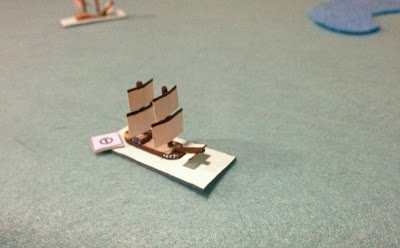 The swift English galleon closed on the plodding Portuguese monster. 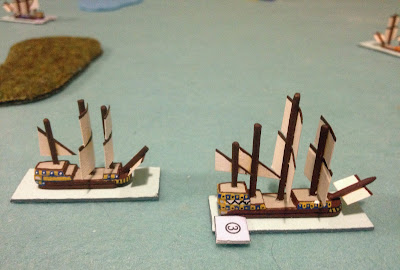 A slight turn gave the English ship an opportunity to fire its broadside. 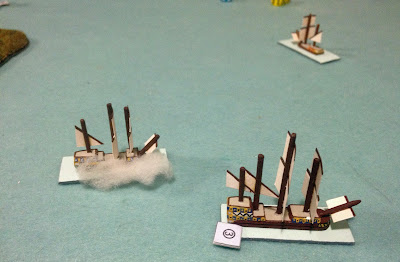 The Nossa Senhora da Guia was damaged, and its captain killed. 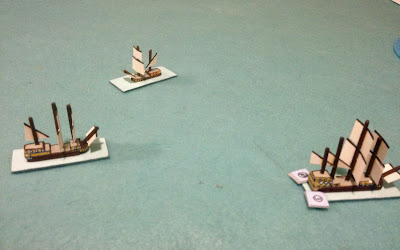 It returned fire, to no effect. 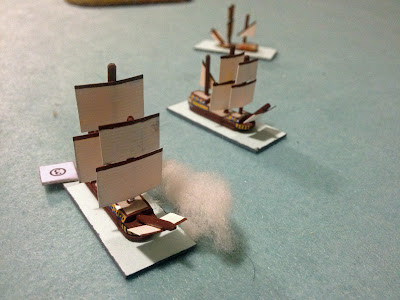 Meanwhile the captain of Auk of Onan tried to get his crew to repair their ship and return to the fight. They refused, taking to the boats and surrendering their vessel to the local authorities. 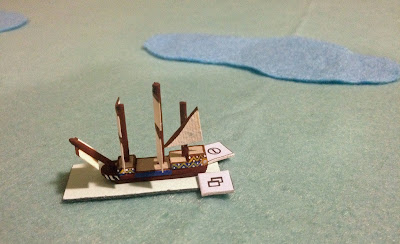 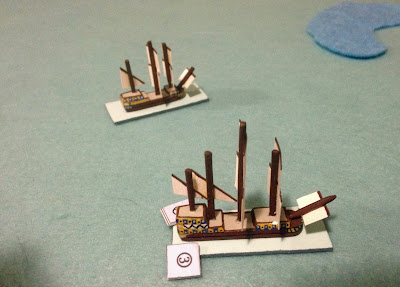 A long-range broadside had to suffice, but had no effect. 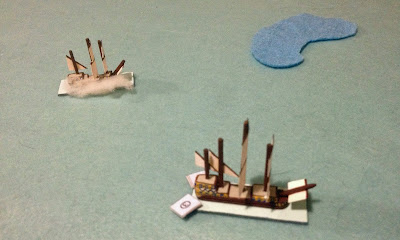 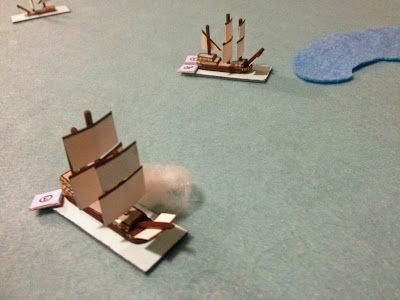 The Portuguese ship ran for safety, and Popinjay fired one last chaser shot. 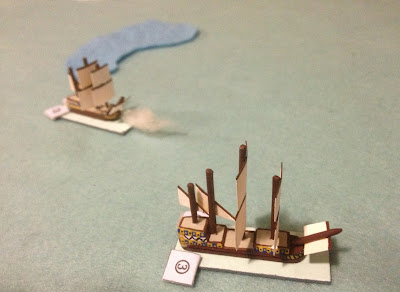 As the treasure ship escaped, Cinco Chagas returned to the action. 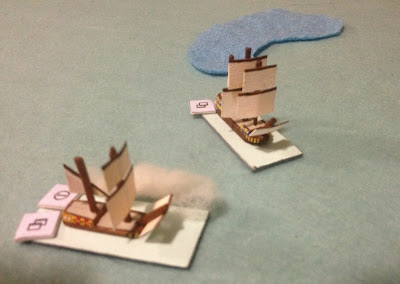 However a broadside from the Popinjay was enough to convince the Portuguese crew to haul down their colours in surrender. 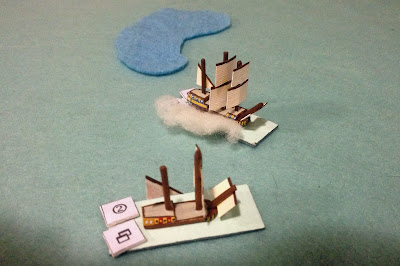 And that was the end of the action.

According to the scenario VPs - I was playing the Pursuit scenario from the rules - the English had won, with one enemy ship captured and another forced off the table outside of its exit area. But it didn't feel like a win; one English ship had been so badly damaged that it had surrendered, the other had been hit and the captured vessel was a local escort of little consequence. The Portuguese had got their treasure ship away. So a Portuguese win in my eyes.

The ship stats were:

The big Portuguese galleon is a tough nut to crack for the English, but some cunning teamwork should do it. Obviously the threat from the escorts needs to be neutralised as well.

With hindsight I had the terrain a little dense, and then chose poorly for a Portuguese starting point, forcing them to try a quite tricky manoeuvre in order to start their escape. That said, some of the early activation rolls were terrible, with the big galleon getting no actions for several of the critical early turns, and both sides getting bad rolls and turnovers as their ships approached each other.

I'll certainly be running this one again at some point.