The Battle of Hampton Roads

I have enjoyed 'Galleys and Galleons' so much that I decided to download the supplement, 'Fayre Winds and Foul Tydes'. As well as a few extra ideas for conventional historical games, it includes a lot of character- and fantasy-based additions. These include the ability to add steam-engines to your ships, as well as make them ironclads. Whilst the rules assume that these features are somewhat primitive, it occurred to me that it might be possible to try out an American Civil War action using them. And what better action to try than the classic Monitor vs Virginia fight in 1862? 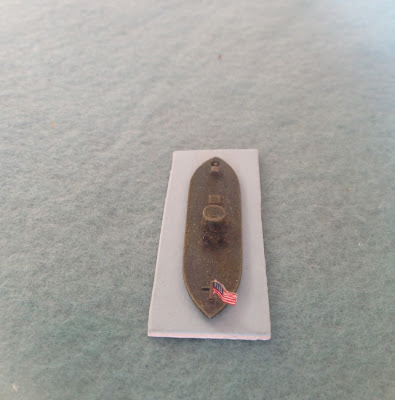 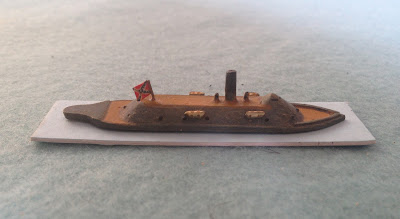 I tried to minimise the number of features I gave each ship in order to keep the game simple. I didn't try and factor in the Monitor's big guns, reasoning that she could only fire one of them at a time. Its Reinforced Hull represents the thick turret armour and its low profile and deck overhang. The Trained Gun Crews on the Virginia represent it being equipped, in part, with rifled guns. Strictly it had lost its ram the previous day, but I kept its ability to do it for the possible entertainment value.

This was the field of battle. The opposing ships entered from the two bottom corners. A sandbank dominated the centre, two areas of shallows the sides and the far edge was all land. 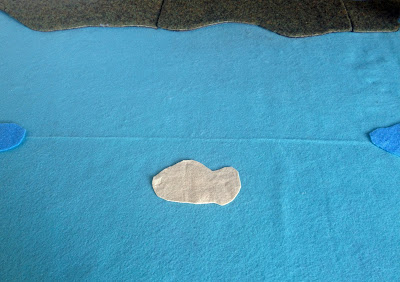 The ships steam into action, Virginia from the left and Monitor from the right. The Virginia got off to a bad start, failing all of its activation rolls for two turns, which meant that it didn't move. With a better quality and agility the Monitor headed for the shallows, where the Virginia would be less able to bring its ram into play. 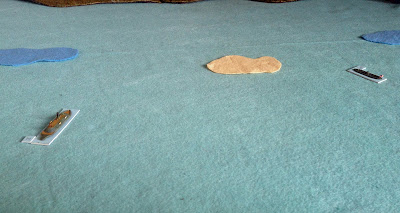 The Virginia fires the opening broadside. It bounced off the Monitor's armour. 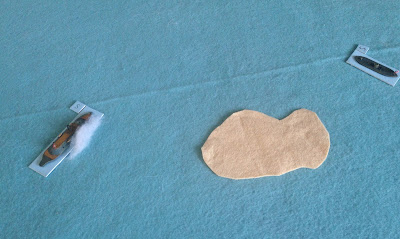 The Monitor returned fire, also with no effect. 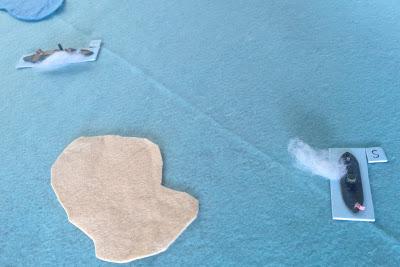 The Monitor approached the Virginia, taking another ineffective broadside as it did so. 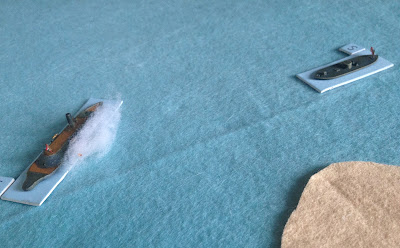 At this point, both ships had an appalling series of activation rolls. They fired a series of wild shots, but then got so close that both ships had to throw their helms hard over to try and avoid collision. 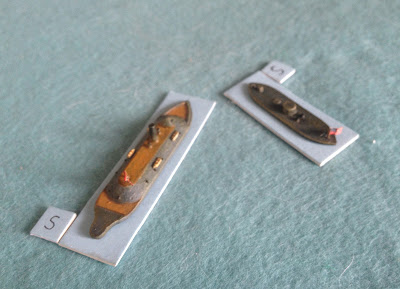 They failed. The Monitor slammed into Virginia's broadside. The Confederate ship took series damage. The Monitor was barely scratched. 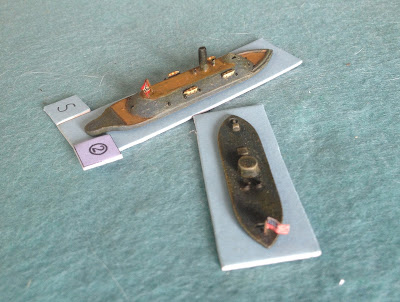 The Virginia's crew managed to organise themselves, and fired a raking broadside at the Monitor, but once again its armour deflected the shots. 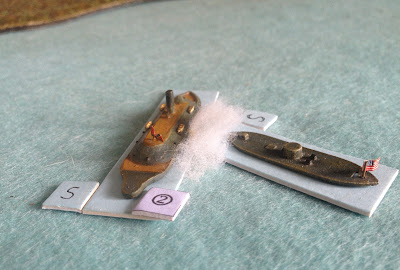 The two ships scraped past each other, and the Monitor found itself in a perfect position to fire a potential game-winning raking broadside into the Virginia. And it go no activations with which to fire it. 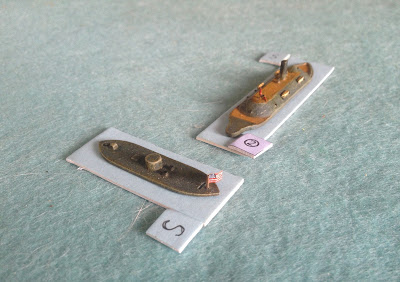 A long mid-game now ensued, as both ships slowly turned in the restricted waters. They reloaded their guns where required, and the Virginia repaired some of the damage from the collision. 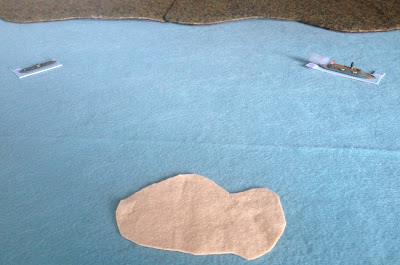 The Virginia really struggled in the confined waters, so moved back between the shallows and the sandbank in order to gain some sea-room for a turn and attack on the Monitor. The Monitor piled on all the speed it had (not much, historically), and went back into the attack. As it steamed towards the Virginia, the Confederates inflicted a long-range hit with their rifled cannons. 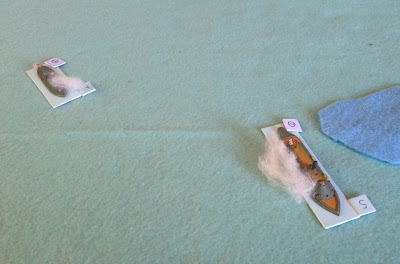 The Monitor positioned itself broadside on the the Virginia, and the cannonade commenced. 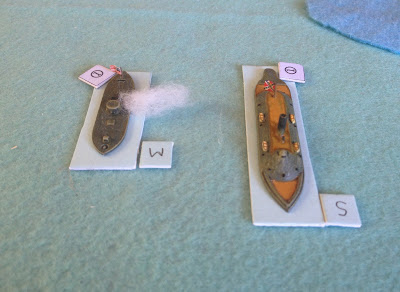 The Virginia got the worse of it; her crew rolled truly badly for their firing, whilst the Monitor managed a crushing critical which left the Virginia crippled. 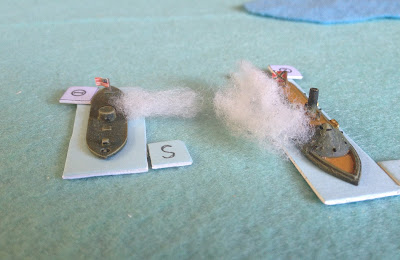 The firing continued. To stand a chance, the Virginia needed to roll all of its activation dice each turn, despite them all being coloured. 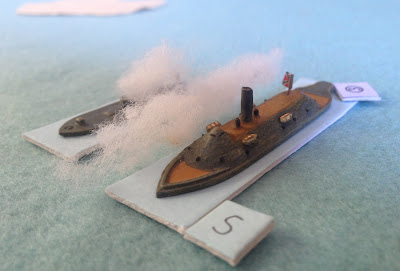 A poor roll, and the Virginia struck its colours.

To be fair, I would say that, for the purposes of saving face, the Virginia's crew chose to break off the action, leaving the field to the Monitor. 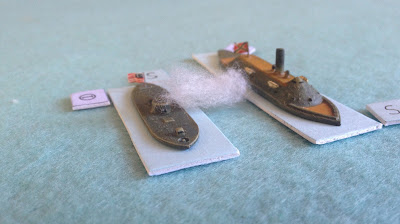 So how did the game feel?

It felt good. It even felt right for the style of action. Yes, the rules didn't cover the rivet-counting and gun-calibre detail that some people like for this era, but the activation system added a level of uncertainty that is often missing. As you can see from the report there were a couple of moments where things went wrong for both ships, and there were a couple more where things could have gone even worse; both ships were saved from running aground only by scoring a single activation. The reload rules made the firing more interesting in this game, as both ships were forced to manage their meagre allocation of activations.

I might consider making the Virginia Q3 in a future game, as the Q4 really hampered it, but I'd have to improve the Monitor a little to compensate.

The new rules were easy to use. The only query I had was whether a vessel with a steam-engine can spend activations to turn if it is currently stationary (I decided that it couldn't, but a strict reading of the rules doesn't forbid it and I may allow it in a future game.). And, if I did decide to do more ACW games, I'd eventually look at working out how to factor in moving in reverse or covering double-ended ships.