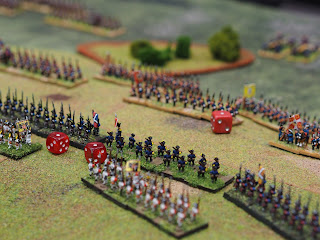 Gary is becoming rather adept at putting together scenarios based on historical battles for Maurice, and last night was no exception when he gave us Leuthen. Frederick's great victory was put together as a game for thee players a side, which we played to a conclusion within the evening.

The table had the Austrian flank command (made up of particularly poor troops) along the long axis, one command facing the Prussians and two others each with part of their force on table either facing the wrong way or in reserve, and the the other half as off-table reinforcements, whose entry was determined by action cards shuffled into the later part of the first deck. The Prussians had all of their troops lined up, ready to pile into the Austrians, and with an initial 3:2 advantage in numbers.

The figures are 10mm, from Pendraken, and were provided by Gary, Peter and Caesar.

Sadly the town of Leuthen had to be represented by a piece of paper and a tent, as Gary forgot his buildings and no-one else thought that they had to bring any. The Prussians would win automatically if they captured the town, otherwise it would be down to army morale.

Here we see Caesar and Peter telling off two of the Prussian commanders - Dave and Daniel - for attacking before Caesar had even managed to sort himself out a cup of tea. Out of sight to the right was Ralph, the third Prussian commander, and I was the third Austrian commander. Gary ran the game and took over Ralph's command when he had to leave. 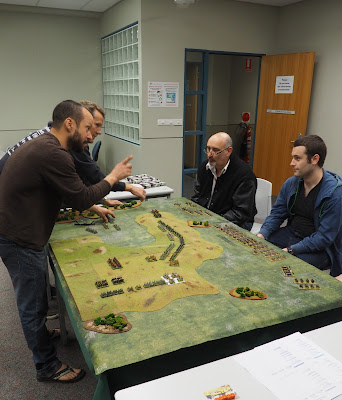 The initial Austrian positions along the ridge, with Peter's conscripts facing the advancing Prussians, and my command around Leuthen and facing the wrong way. 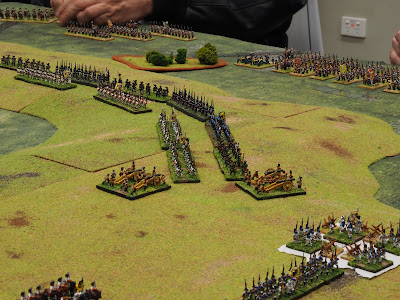 The main force of Prussian infantry in fast-moving, slickly-deploying, columns and commanded by Maurice killing-machine Daniel. 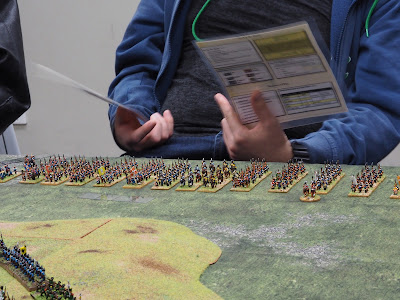 A shot of my command. Badly-deployed, most of these troops wouldn't move from their positions for the rest of the game. Including the cavalry. I had elite grenadiers holding the town. 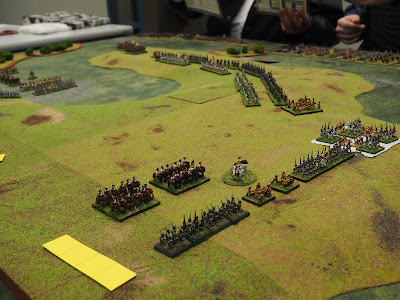 The Prussians advanced onto the ridge and then smoothly shook out into line. 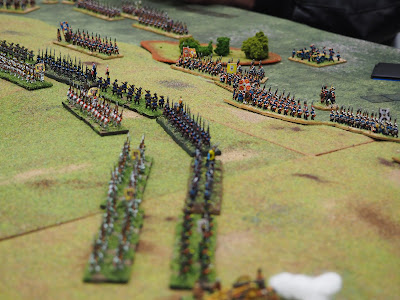 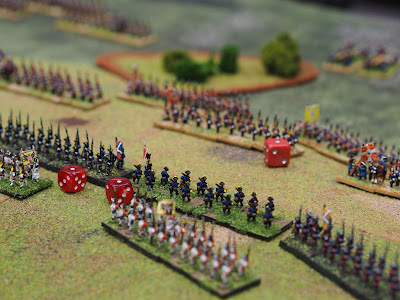 On the Prussian far right, Dave threw in his cavalry. 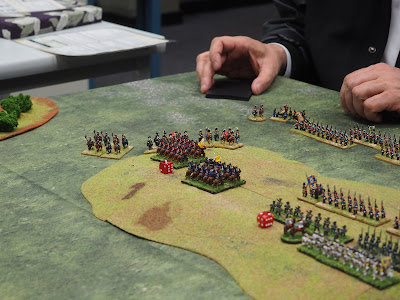 Caesar got his reinforcements on fairly quickly, and set about organising a counter to the Prussian assault. 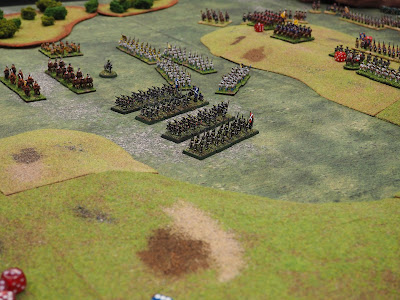 I had assumed that Ralph would go for a direct assault on Leuthen, and moved my artillery accordingly, but he swung away from it, and deployed to hit the right of Peter's line. This left my grenadiers pretty much watching the battle for the rest of the game. 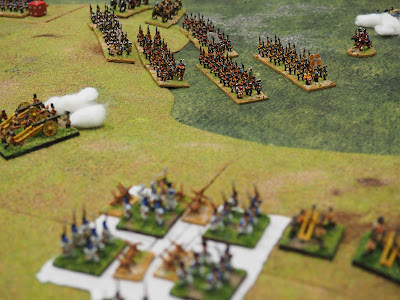 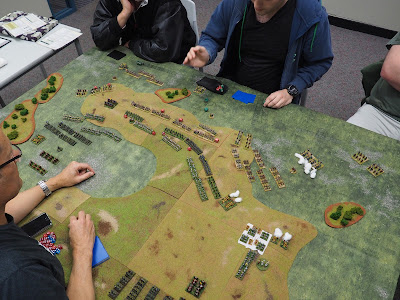 And an extreme aerial view (with selfie) taken later in the game, after Ralph had gone. 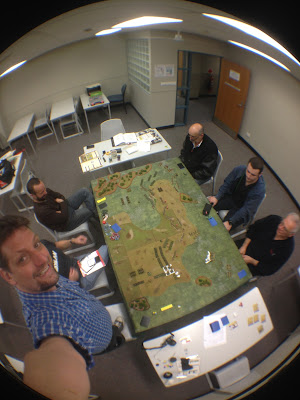 Ralph's Prussians formed up and hammered away at Peter's Austrians ... 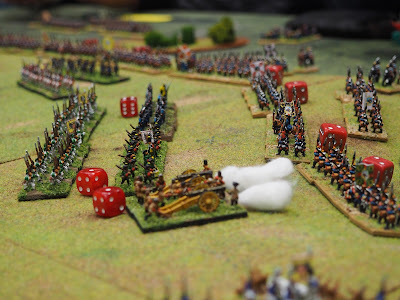 .. but my reinforcements arrived, and formed up in support. 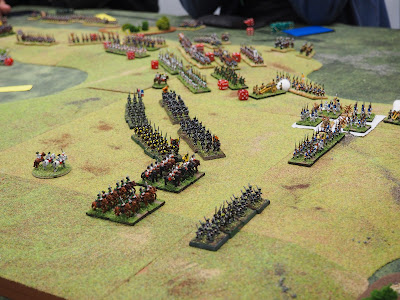 However the centre of our position had now collapsed, and we were left with organising counterattacks from the flanks. 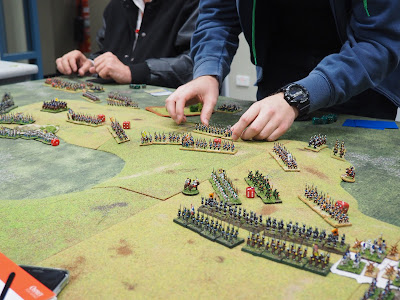 A view from the other end of the table shows Caesar organising his troops , and Dave's cavalry attacking strongly. 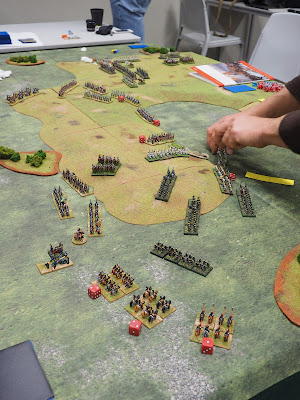 He even managed to organise a massed charge, something quite tricky in Maurice. 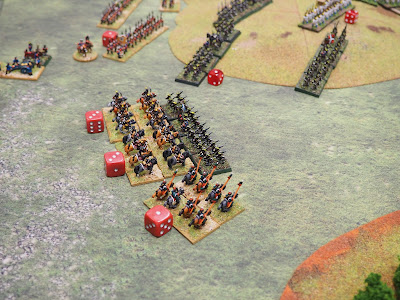 The morale points for both sides were now getting quite low. Although the Prussians were doing well, they had started with fewer units on table, so the Austrians had a few potential losses in hand over them. At this stage both sides pretty much had 6-7 points each, with a lost unit knocking 1-3 points from that total. So a bold attack by either side could swing the game. 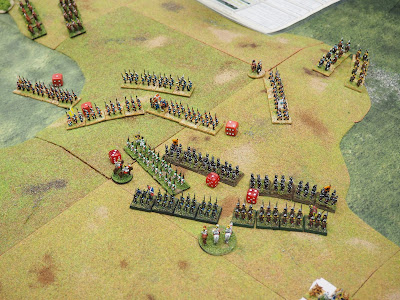 And it was the Prussians who made it, breaking the Austrian army with a few morale points of their own still in hand. 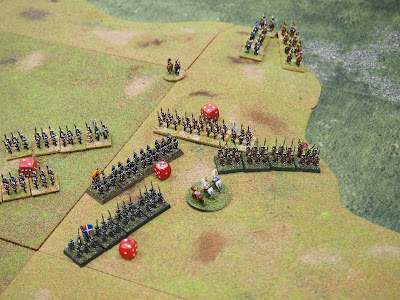 Gary organised yet another excellent, and very close, scenario, with the Austrian players feeling like they could pull off a victory right until the end. I understand that there was a little bit of tweaking to make the battle playable - fewer Prussians than perhaps there should have been, for example - but it certainly had the right feel, with our troops desperately trying to organise a defence against an attack from an unexpected direction. Eve with all of those troops in play, we managed to set up and complete the game in under four hours as well, which isn't bad going.

The next time you see these figures, they will be fighting under Black Powder. It will be interesting to see how the two games compare.
Posted by Kaptain Kobold at 20:21