A few weeks ago we played a big Waterloo game using Blucher. The result caused much discussion in our group abut the objectives and tactics each side had used to attain then, and comparisons with the actual events.

I thought that it would be interesting to play a game of W1815, and set strategies for both sides based, as far as was possible, on those we adopted for our refight, then see how they played out.

Here is the initial setup. 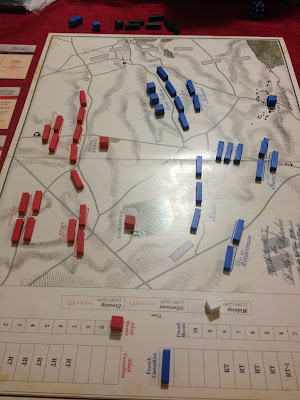 I set myself the following limits:

(i) The Allies would not contest Hougoumont or La Haye Sainte. That is, they would not expend units from the Reserve in order to cancel their capture.

(ii) Allied Reserve units would only be used to cancel casualties on Hill's or Orange's Corps.

(iii) The Allies would concentrate, as far as possible, in getting the Prussians onto the board.

(iv) The French would launch infantry attacks on Hill and Orange, aiming to capture the strong-points. They would then use their cavalry, especially against Hill where there was an open flank in our Blucher game.

(v) Lobau would be used as much as possible to prevent the Prussians taking Plancenoit, once they had four or more units in play.

(vi) The French would chuck in the Guard as soon as practical, either to save Plancenoit or attack the Allied line. But since its use is heavily penalised in W1815 I decided that 'practical' would be tempered with 'sensible'.

On with the game.

Turn 1 - The French activated Reille, who rolled a 5, taking a casualty but capturing Hougoumont. The Allies didn't contest this, activated Blucher with a 5  and got a Prussian division.

Turn 2 - With Hougoumont captured, French activity on that flank could cease for a while. I switched to the other flank, which had been run by Caesar, and put myself in his place. I decided that he wouldn't attack entirely unprepared, so activated the Grad Battery (which we didn't have in our Blucher game). A 4 saw the Allied Morale drop from 10 to 9. Once again the Allies activated Blucher, and a roll of 3 with a +1 modifier saw another Prussian division appear.

Turn 3 - The French continued their bombardment of the Allied lines, and a roll of 5 caused a casualty. The Allies used the Reserve to counter it.

Turn 4 - Again the Grand Battery fired, and the Allied Morale was reduced from 9 to 8. I reasoned that they wouldn't have put up with this in the Blucher game, and attacked with Uxbridge. However a roll of 1 saw his cavalry repulsed, and two casualties inflicted.

Turn 5 - With Uxbridge repulsed, the French threw in a counter-attack from Milhaud. A roll of 3 saw the Allied morale drop to 7. The Allies continued to rely on Blucher, and a good thing they did. A roll of 6, with a +2 modifier saw another Prussian division arrive, and the French take a casualty. This was removed from Reille's Corps, as it was currently inactive.

Here is the situation at the end of Turn 5. Not too much damage on either side, but the Allied Morale was dropping to a level where failed Rout tests were a possibility. 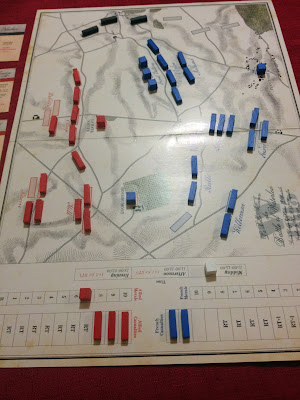 Turn 6 - D'Erlon attacked Orange's troops, rolling a 3 which caused a casualty on both sides. The Allies absorbed theirs with the Reserve.

Turn 7 - D'Erlon's attack continued, but he rolled a 1! This caused the loss of a French division, plus a point of French morale. The Allies took a gamble, and counterattacked with the remains of Uxbridge's cavalry. This immediately caused another French casualty and the loss of another point of Morale.In addition they got to roll against the Grand Battery, with a +1 modifier. A 6 saw the battery swept away, causing another Morale point to be lost by the French. The French had to take a Rout Test, but couldn't fail it at this stage.

Turn 8 - Milhaud attacked Orange. With hindsight I should have counter-attacked Uxbridge, looking to destroy the last division, but I didn't think of it. A roll of 5 saw the Allies take a casualty and a point of Morale, but they used the Reserve to cancel this. This left the reserve with only one Division. The French also took a casualty, which triggered another Rout test. Again, they couldn't fail. Orange went into square.

Casualties had mounted on both sides, and this triggered the Time marker to be moved to Afternoon. Here was the position at that stage. The Prussians were not on the field in any strength yet, but the French right was virtually spent. Both sides were about equal in terms of casualties and Morale, but the Allies only had one more division left in reserve: 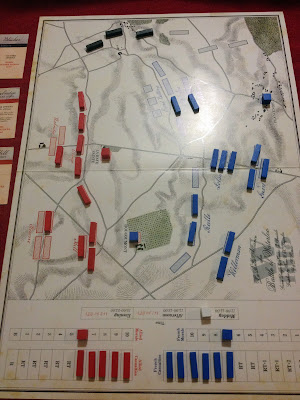 Turn 9 - Although Orange was in square and vulnerable, D'Erlon's Corps was too weak to consider attacking him with. I switched to the second phase of the plan - a French cavalry attack around the Allied right-flank. Kellerman was activated, and Ney personally led the attack, ordering all of the cavalry forward in a reckless charge! Hill went into square in response. To make matters worse the Allies activated Blucher again. A roll of 6 and a +3 modifier saw them capture Plancenoit, inflicting a French casualty in the process.

Turn 10 - Normally when Plancenoit falls the French can activate the Guard as a counter-attack to offset it. But with Ney ordering a cavalry assault, all of the French attention had to be focused on that. Kellerman charged Hill's squares, taking a casualty and  costing the Allies another point of Morale. The French took a Rout test, but even with the +1 modifiers they couldn't fail it. The Allies continued to press with the Prussians, and a roll of 7 (score of 4 and a +3 modifier) saw them inflict another French casualty and another point of Morale. The French could now fail their tests, but a roll of 1 saw them pass easily.

Turn 11 - Once again the French were forced to activate Kellerman's cavalry, who wiped themselves out against Hill's infantry, but rallied, ending Ney's impetuosity. The French had to take another Morale test, but rolled low and passed again. However their army was obviously shaken, so Wellington ordered a General Advance. With no Grand Battery left this was a risk-free strategy, inflicting two more French casualties (taken from the Guard, as they were the only Corps that really had enough troops left), and forcing another Morale test. This had a +4 modifier, against a Morale score of 5 - only a 1 could save the French. They rolled a 4 and the army routed.

Here is the final position. 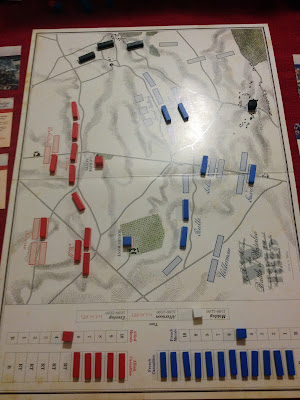 D'Erlon's failed assault followed by the Allied cavalry attack which destroyed the Grand Battery was the beginning of the end for the French, seriously limiting their options. To then lose Plancenoit just as their cavalry went on an uncontrolled rampage sealed their defeat, since they were unable to respond to the disaster unfolding behind their army. The Prussians didn't appear in any strength, so the French counter-attack against them was wrong-footed. The main Allied line was still strong at the end, but the possibility of a catastrophic morale failure was ever present. The French just didn't really get the chance to trigger it, although Kellerman's doomed attacks could have been the cause.

A second game was equally unlucky for the French. They pushed the Allies to within one casualty of their army breaking automatically, only to fail a morale test on a 1 in 6 chance before they could inflict the final casualty. In that game the Prussians arrived in full strength, but were lethargic on the field and completely failed to capture Plancenoit.
Posted by Kaptain Kobold at 23:41