We went to see 'Ant-Man' last weekend, and all enjoyed it. It was nice to see a minor Marvel character on the big-screen and in a film which felt like one of the old 'Marvel Premiere' comics rather than the more mainstream titles. The problem with the 'Iron Man' or 'Avengers' films is that they are based on titles which have long continuous runs with many stories, but in a film you can really only get one, Hence you lose one of, to me, the important aspects of the comics themselves. It's like only seeing the special double-sized 100th or 200th or whatever issue of the comic, rather than getting the whole continuity.

Anyway, whilst not a perfect film it did capture the essence of a smaller-scale (no pun intended) character without their own comic, and even the fact that the hero had a history before the film started.

Inevitable I decided that a Supercrew write-up was in order. It has some minor spoilers, but I'm assuming that anyone interested has probably been to see the film now. 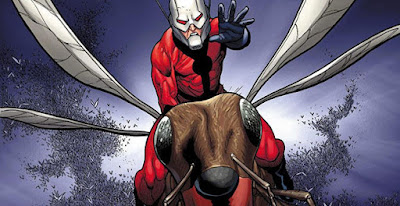 The Ant-Control covers all of the things he can do with individual ants or swarms. The Anthony trick covers their use as transport (in Supercrew a trick can only be used to get the bonus once per game, but can always be used as part of a narration - so Ant-Man can always fly on the back of Anthony, but only gets a bonus for it once). Shrinking is the main ability, with the trick being rapid changes in size - growing into a punch or jumping through a keyhole and landing at full-size. Finally the Pym Particles ability represents the extra gadgets Ant-Man has in the film, which are used in emergencies, plus his own skills as an engineer being used to modify the suit and push its capabilities.