Ten years ago I gamed with a club which met on a Friday evening, so we were lucky enough to have our regular session on the exact 200th anniversary of the Battle of Trafalgar. So we played it on the day. I now play on a Thursday, which meant that our meeting coincided with the 200th anniversary of Waterloo. So I think it's obvious what we played last night.

Locally, Ralph and co. did the battle in grand style last weekend up in Campbletown, using thousands of figures on thirty square metres of table. You can read about that, and enjoy the pictures HERE. For out evening game something more modest was selected - 15mm figures using Blucher, which is designed for this scale of game, and covering the eastern end of the battlefield, towards the end of the day (hence the title of the scenario). The stars of the show would be the Prussians, faced by Lobau's VI Corps and the Guard, with some limited action between the remnants of d'Erlon's and Orange's Corps along the main ridge.

You can see the basic setup here, from behind the Anglo-Allied lines. In the distance is Plancenoit, the main objective for the Prussians. Out of shot to the right are the secondary objectives of La Belle Alliance and La Haye Sainte.

At this stage the Prussians (top left) are still deployed as cards. 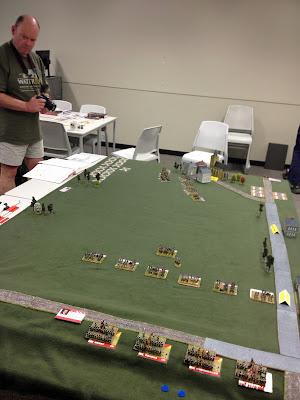 Lobau was deployed before Plancenoit. On the left of the picture is the main road to Brussels, plus the Guard, also still deployed as cards. 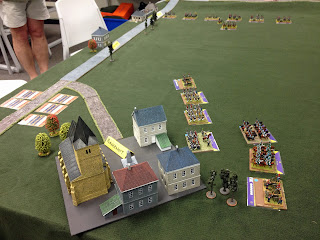 The ridge, with the remains of Orange's Corps, faced by d'Erlon. 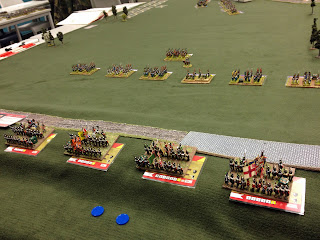 Later into the game, and there was lots of hard-fighting going on for Plancenoit. 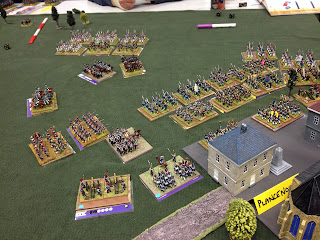 The fight for the ridge was also moving along at a fair pace. 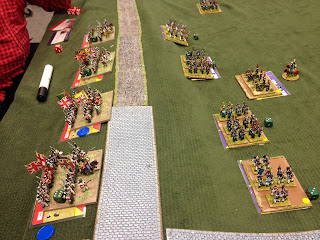 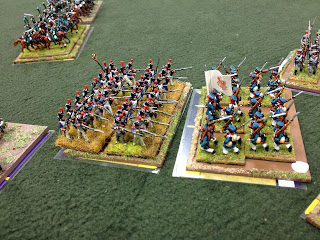 The main man - Napoleon. In Blucher terms he was rated as Immobile for this scenario, meaning that he could only bring his influence to bear every few turns. Gone are the days of Napoleon the Legend. 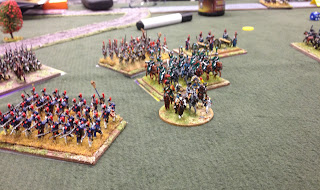 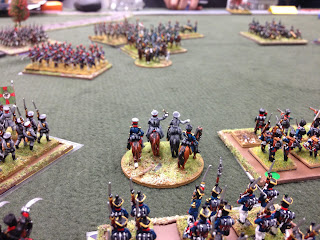 Blucher's simplicity led to a game easily played within the time available, but with plenty of hard-fighting and incident, and a feel for the events of the day.

Of course the scenario was a limited version of Waterloo, in both time and space. However I'd brought along W1815 and, by my reckoning, we managed seven games of it during the course of the evening. Here's Gary considering his options at the beginning of one of them. 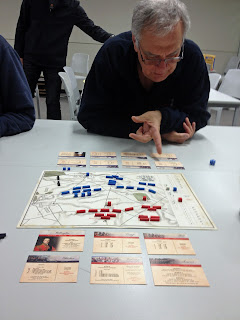 Everyone who played picked it up pretty quickly. I found that the French offered the best experience for a player new to the game, with their options being more active rather than the mostly passive or proactive decisions of the Anglo-Allies. French defeats began to vanish as the game was learned, leading to victory for Napoleon in roughly half of the games. I had one game as the French and managed to pull off a victory despite Ney deciding to throw all of the cavalry into an attack on Hill late in the morning. Although the French cavalry was bled white, the Anglo-Allied morale was severely shaken, and a firm push by the rest of the French army was enough to rout Wellington's army before the Prussians reached the battlefield in significant numbers.

Ralph provided appropriate music, which sadly did not include Abba's classic. However I realised that I did have one song in my collection we could have used. From the John Renbourn Group - 'The Plains of Waterloo':

And, just for Caesar, who had never heard of the song which gave the scenario (an this post) its title, here are The Kinks: