Who would have thought that I'd buy a Napoleonic boardgame - or at least one that didn't feature either ships or South Americans?

Well, I did. Seduced by reviews I bought a copy of 'W1815' by Finnish company U&P Games. It's the Battle of Waterloo. And it plays in 15 minutes.

It achieves this by putting the player in command at a very high level, and giving them minimal but quick decisions to make. This is not a boardgame you'll pull out again and again for a rich, immersive experience. It's short and brutal, but it generates a sensible narrative and, despite the designer's insistence that it is unbalanced, it generally gives a close game.

How does it work? Well, the key to the game is not the battlefield and the neat little wooden block pieces. They are just there to mark casualties. The key is the set of cards each side gets, each card representing a Corps or equivalent formation. Thus the French have cards for d'Erlon (I Corps), Reille (II Corps), Kellerman (III Cavalry Corps), Milhaud (IV Cavalry Corps), Lobau (VI Corps), the Grand Battery and the Guard. The Anglo-Allies have cards for Hill, Orange, Uxbridge's cavalry, the Reserve and Blucher's Prussians. On your turn you activate one of these cards. Each card has a pre-designated target, and its own combat results table - you roll a dice, apply relevant modifiers and apply the effects to the card's target. So, for example, an action by d'Erlon only affects Orange's infantry. Results can cause the removal of divisions to the casualty track, each of which pushes the army closer to breaking, and/or the loss or morale. Some cards can act as a counter-attack to an action by the other player.

In addition both players have one-use cards for their commanders - Napoleon can be used to try and optimise the result of one French action, whereas Wellington can order a general advance which is risky, but can break a wavering French army.

The key to the game is the subtle interplay of these cards. Actions taken with one formation can improve your chances with other formations further into the game. For example d'Erlon and Reille can capture the strongpoints of La Haye Sainte and Hougoumont respectively. This not only improves their future actions, but also improves the odds of an action by the Guard. So you wouldn't consider committing the latter to the fight until one, if not both, strongpoints have been taken.  The Anglo-Allies can counter the capture of a strongpoint by using their Reserve, but this is a finite resource, and its loss has a detrimental effect on Allied morale. So as you can see, both sides must weigh the odds and make decisions about the best action to take.

As the game progresses casualties and morale loss will force rout tests on one or both armies - the first army to break loses.

The rear cover of the rules shows the game set up for play and has a short example of play (click on the picture to make it bigger): 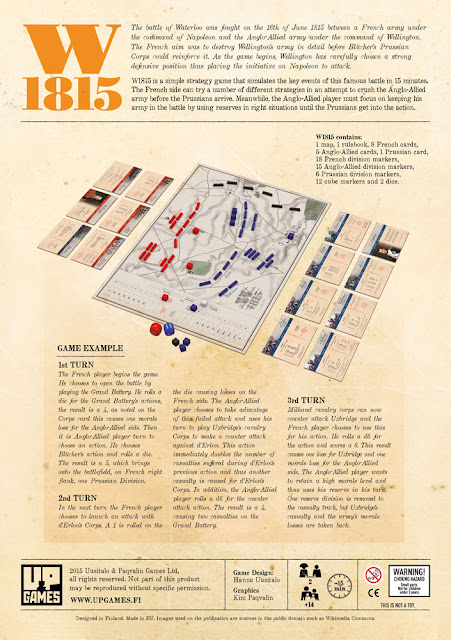 As you can see, it's a nicely presented game.

I played through four games this evening, with honours being even. In the first the French pulled off a win through the sheer number of casualties they inflicted on the Allies - their victory came despite a spectacular cavalry charge by Uxbridge which wiped out the Grand Battery and the Prussians capturing Plancenoit. French losses came from games where they battered themselves against the Allied lines to no avail, before succumbing to casualties from the Prussians in one game and a Wellington-inspired general advance in the other. Here's a couple of pictures, both showing games where the Allies were losing: 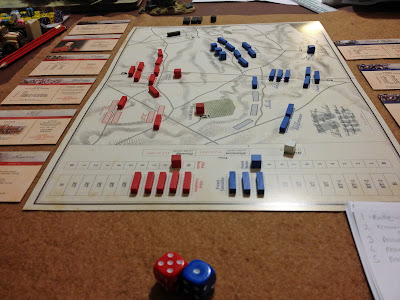 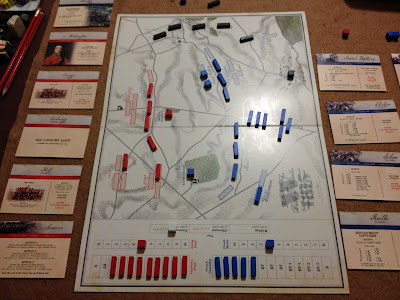 If you like simple, abstract games which generate a bit of a story and don't take long to play, then W1815 is the one for you.

BBG has pretty much everything you need to know HERE.

This review does an excellent job of tying the game into the historical events, and explains some of the nuances and interactions far better than I can. His final point is telling - it will take you longer to read the review than to unpack and learn W1815.