For some reason one of my earliest square-grid games - a refight of the 1862 Battle of Valverde using a variant of Bob Cordery's Portable wargame - is one of my most popular posts. It regularly features as one of the four most-viewed posts of the week, but for the life of me I can't pin down where the hits are coming from.

Anyway, my games on a square grid have moved on a bit in the last couple of years, so I thought that it might be fun to replay Valverde using my latest attempt at a set of rules.

I used the same terrain setup as before - a fordable river on the Union side, with a small grove of trees just across it, a gully about halfway across the table and an impassable mesa in one corner. The trees restricted movement, and provided cover, the river provided defence against close combat and the gully provided cover from shooting. 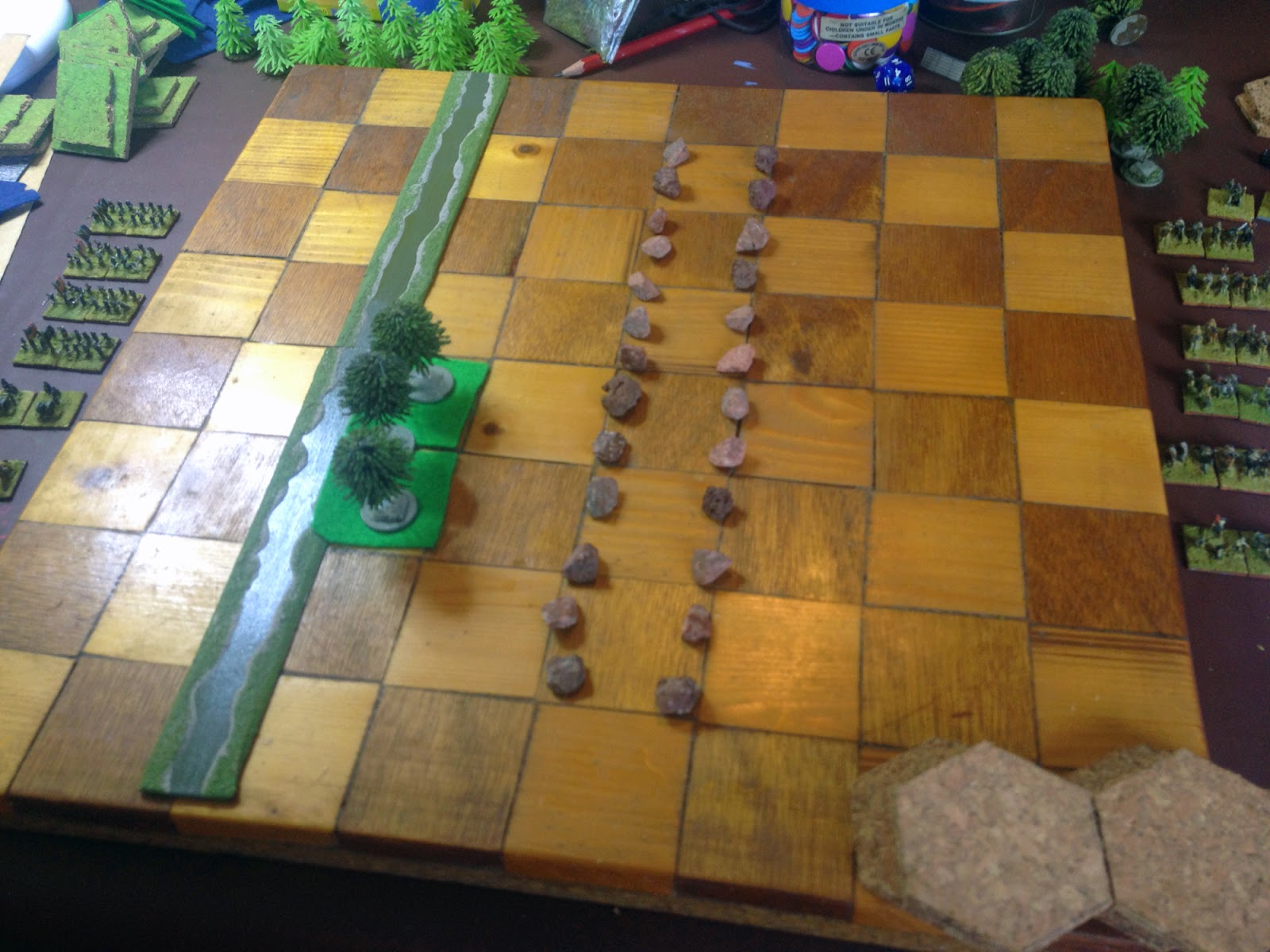 All units were Regular, except the Union Infantry, which were Poor.

On each turn, each side could bring two units onto their base edge, plus attempt to activate any that were already on the table.

Both sides made a move for the obvious cover. The Union moved some infantry into the grove, whilst the Confederates lined the gully with cavalry. A firefight commenced. 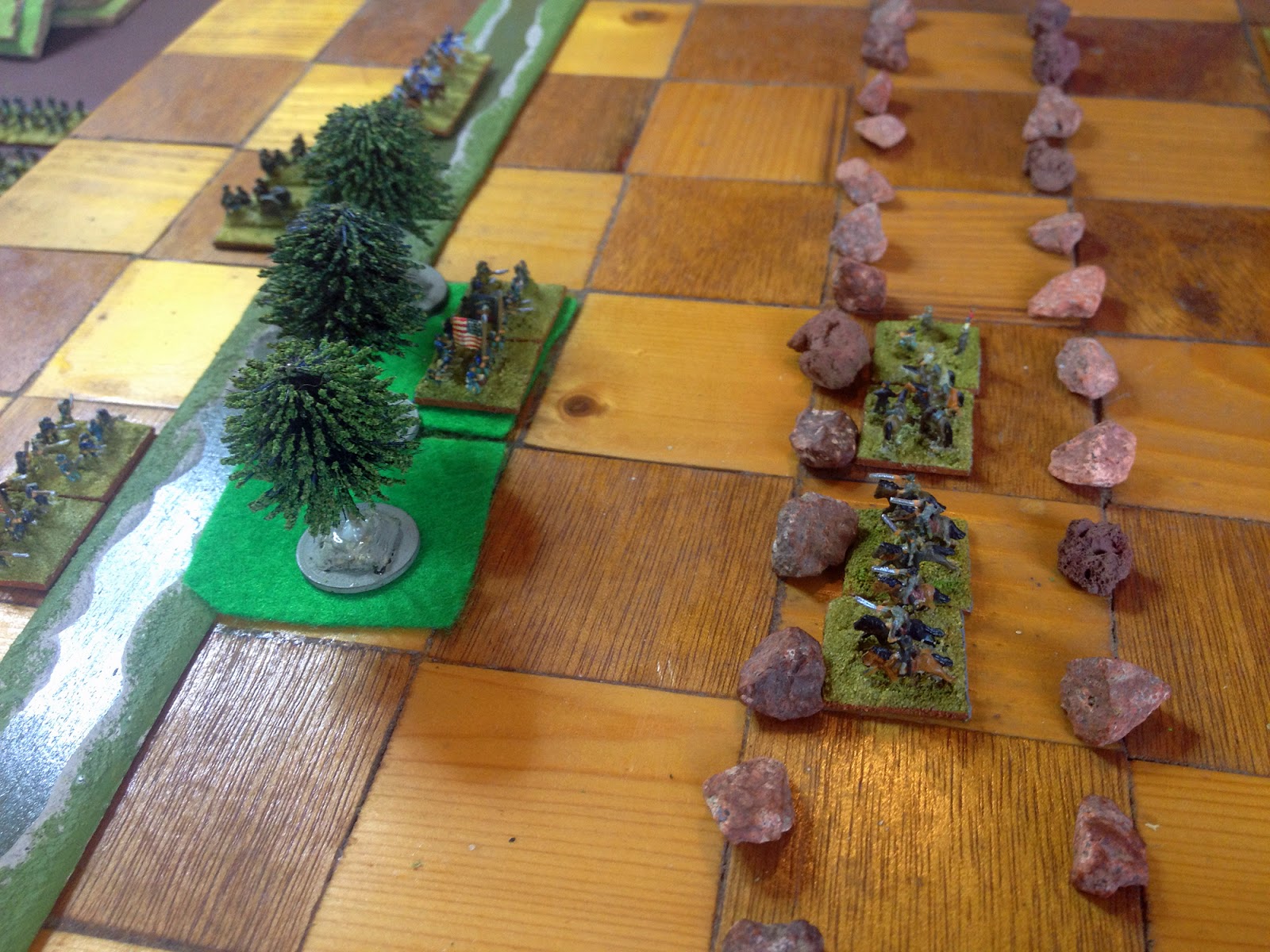 On the Union left they pushed across the river with a force of infantry and cavalry. In the centre both sides' artillery faced off in an inconclusive duel. 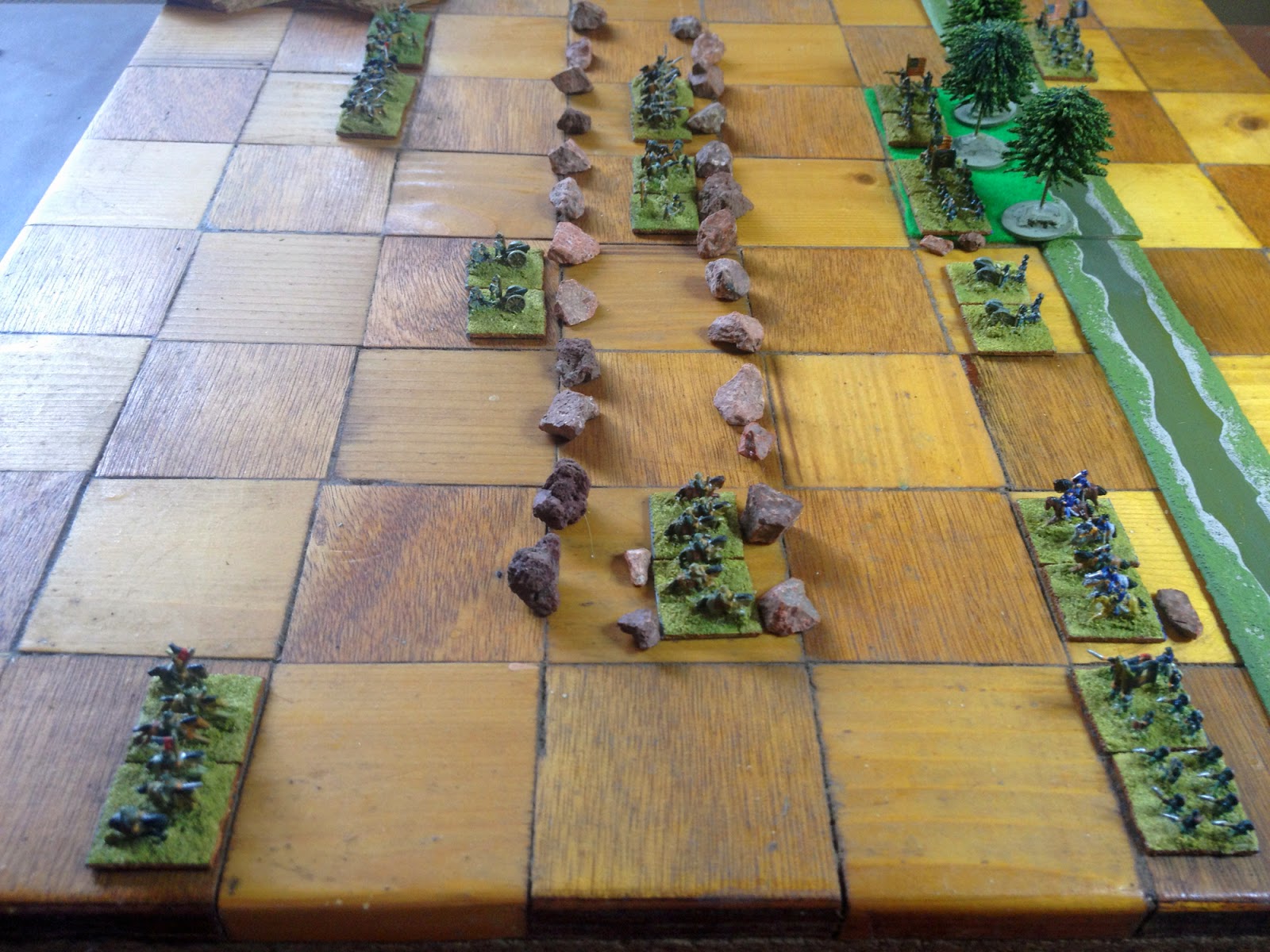 First blood went to the Confederacy, as a Union infantry unit broke under pressure. 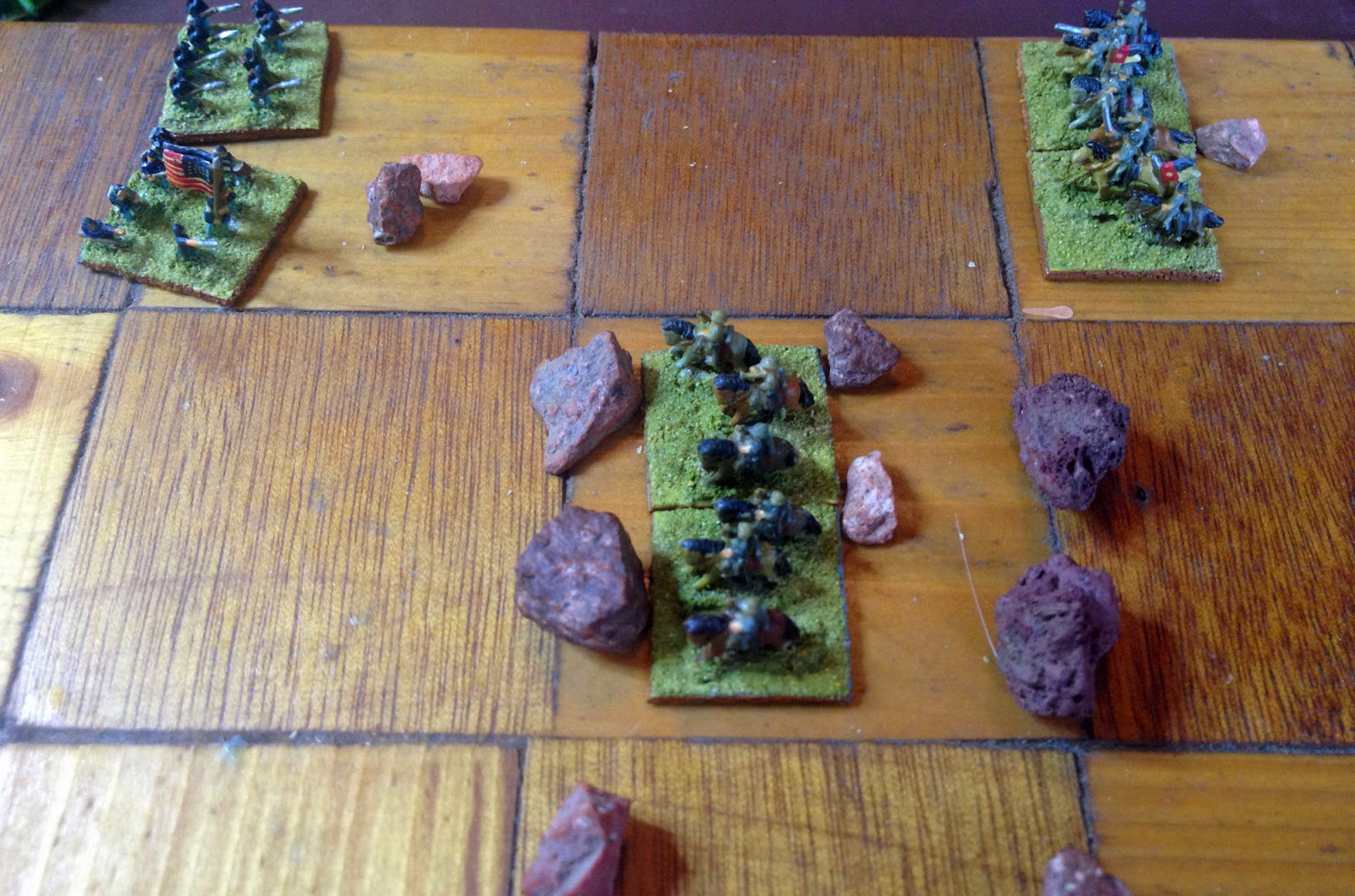 Another fled from the grove after taking steady fire from the gully. 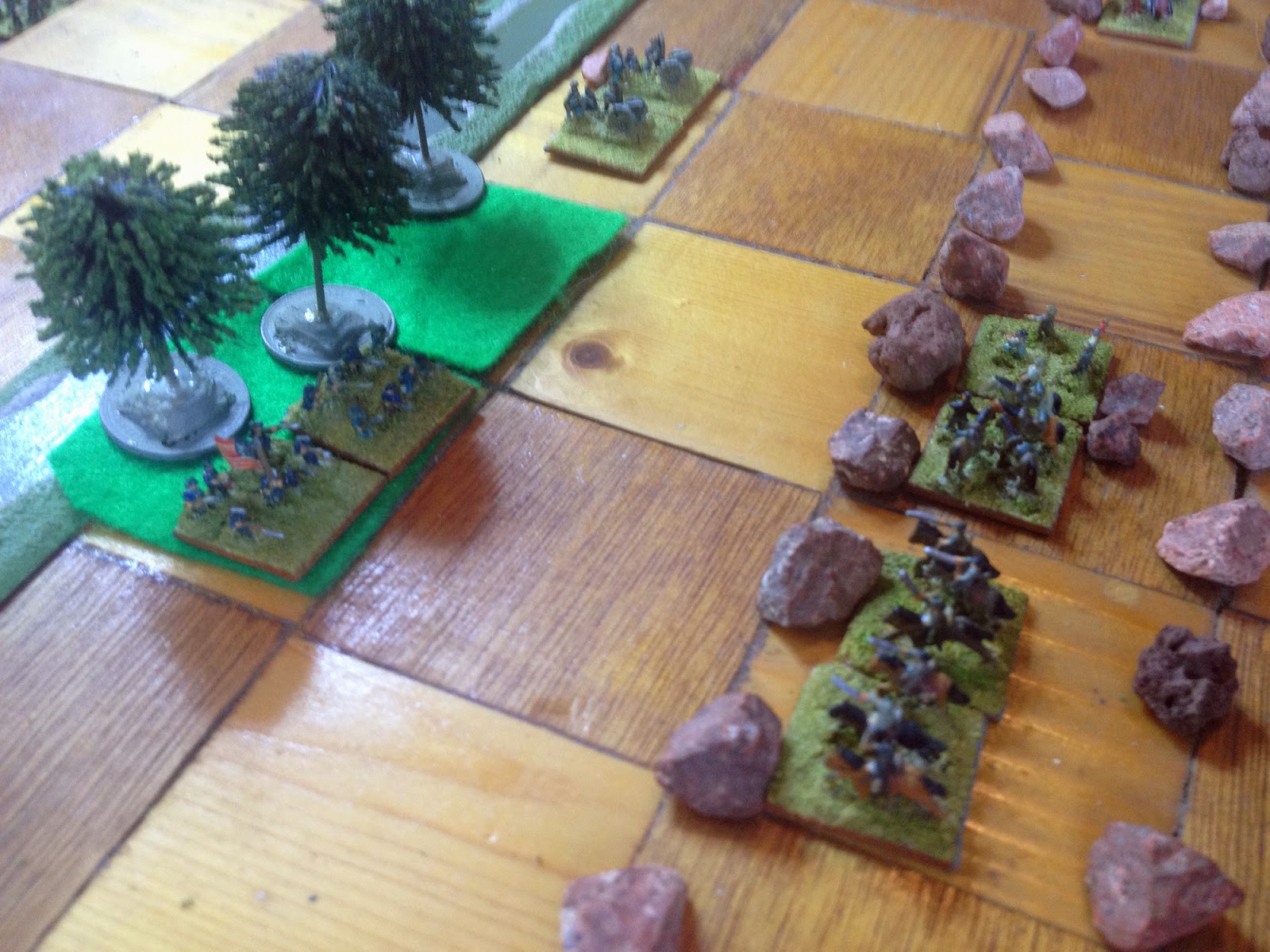 The Union managed to outflank the Confederates' position in the gully, but the boys in grey held them off. 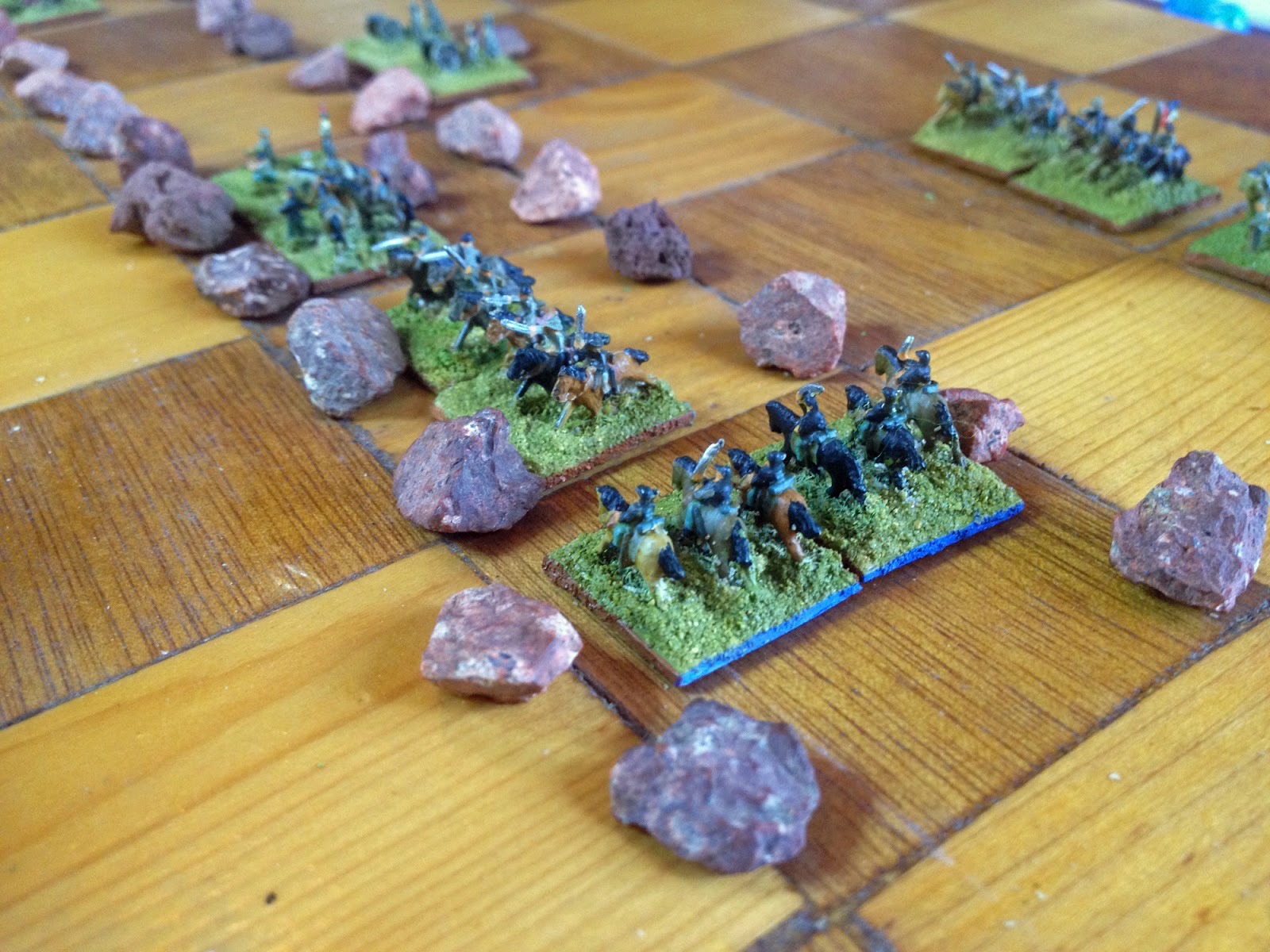 The Confederates pushed into the grove, where the shaky Union militia infantry were not really up to opposing them. 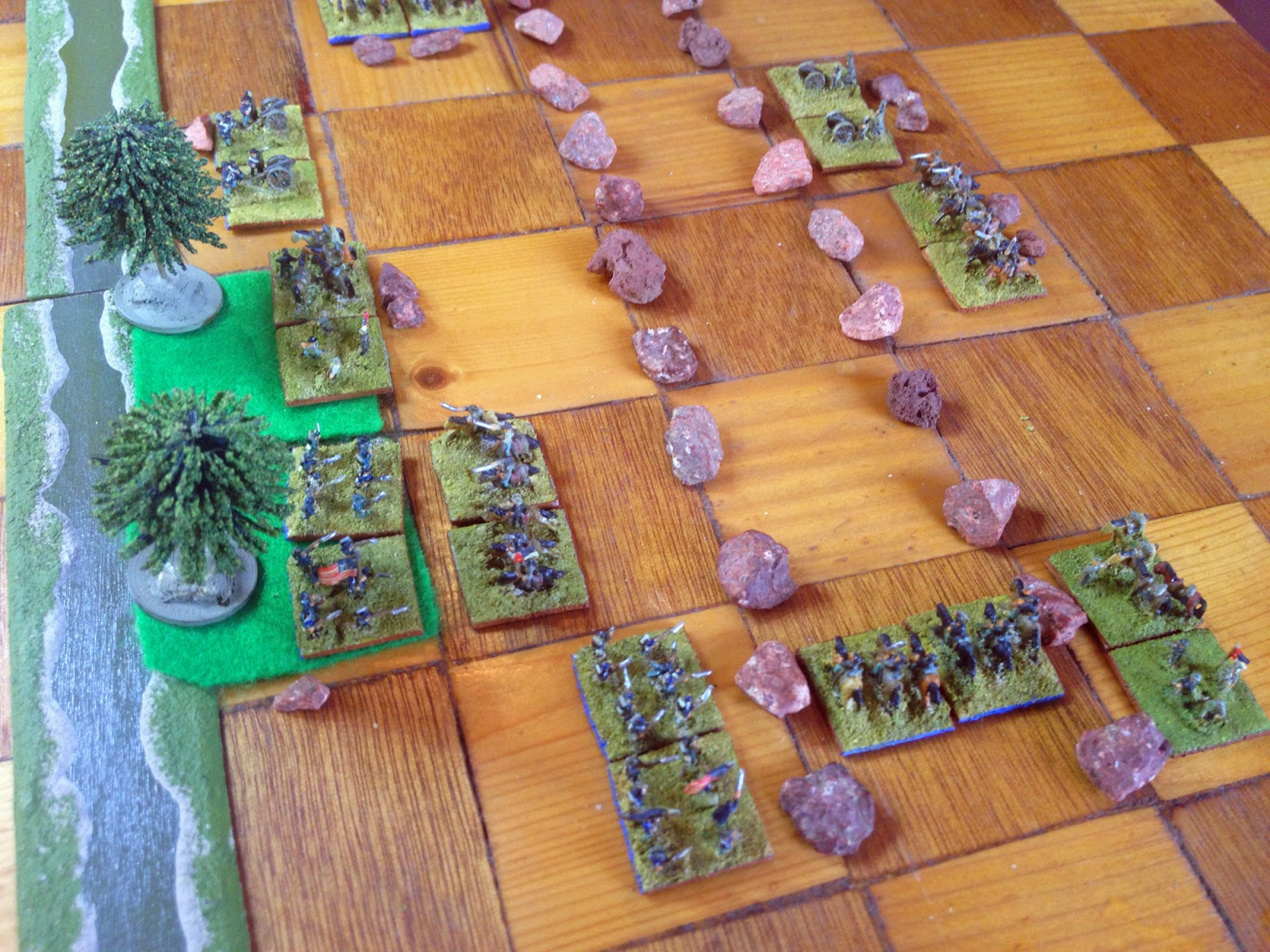 The infantry routed, and the Confederates turned on the Union right 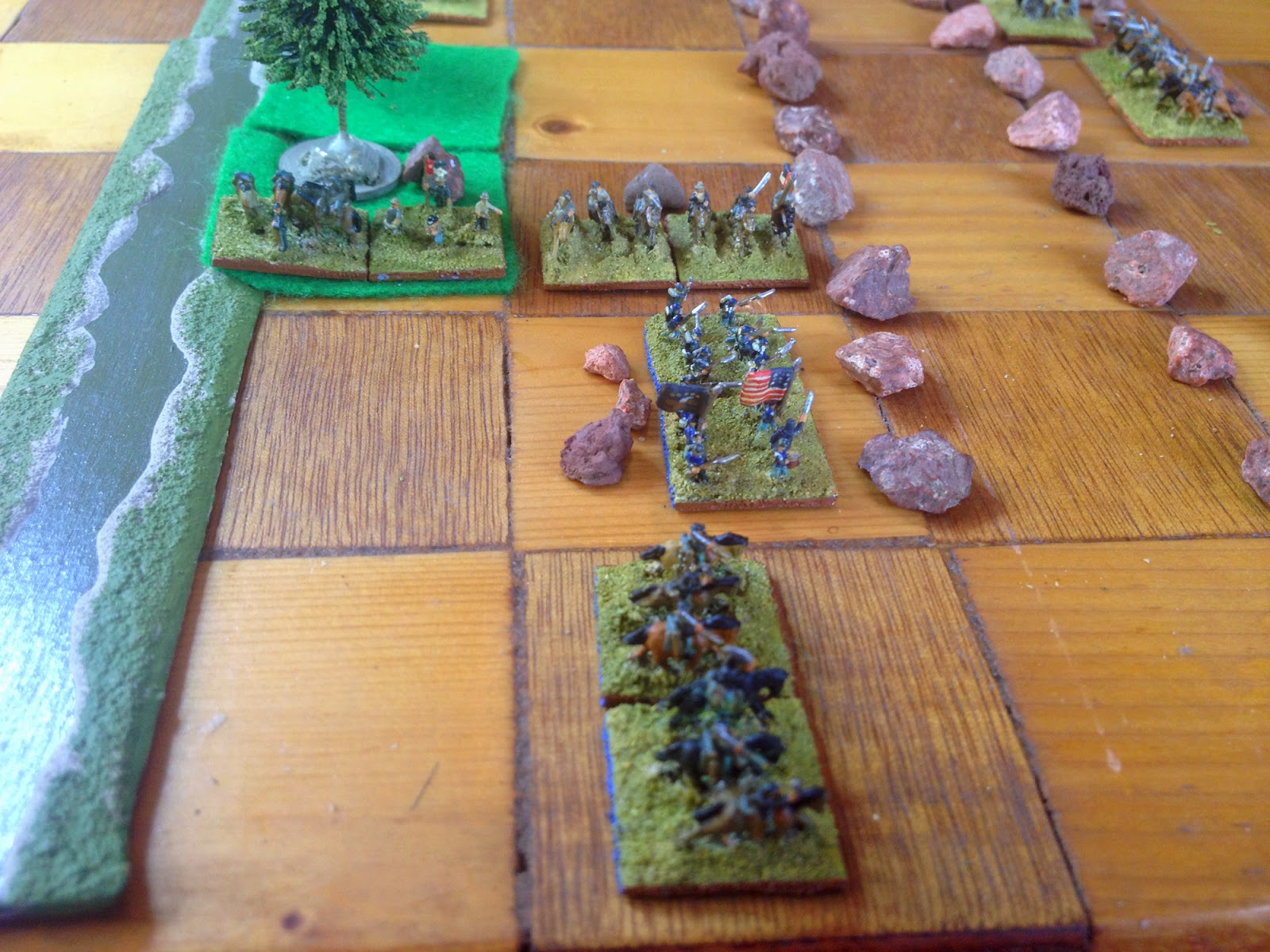 In the centre the Union managed a minor breakthrough, attacking and taking the Confederate artillery. 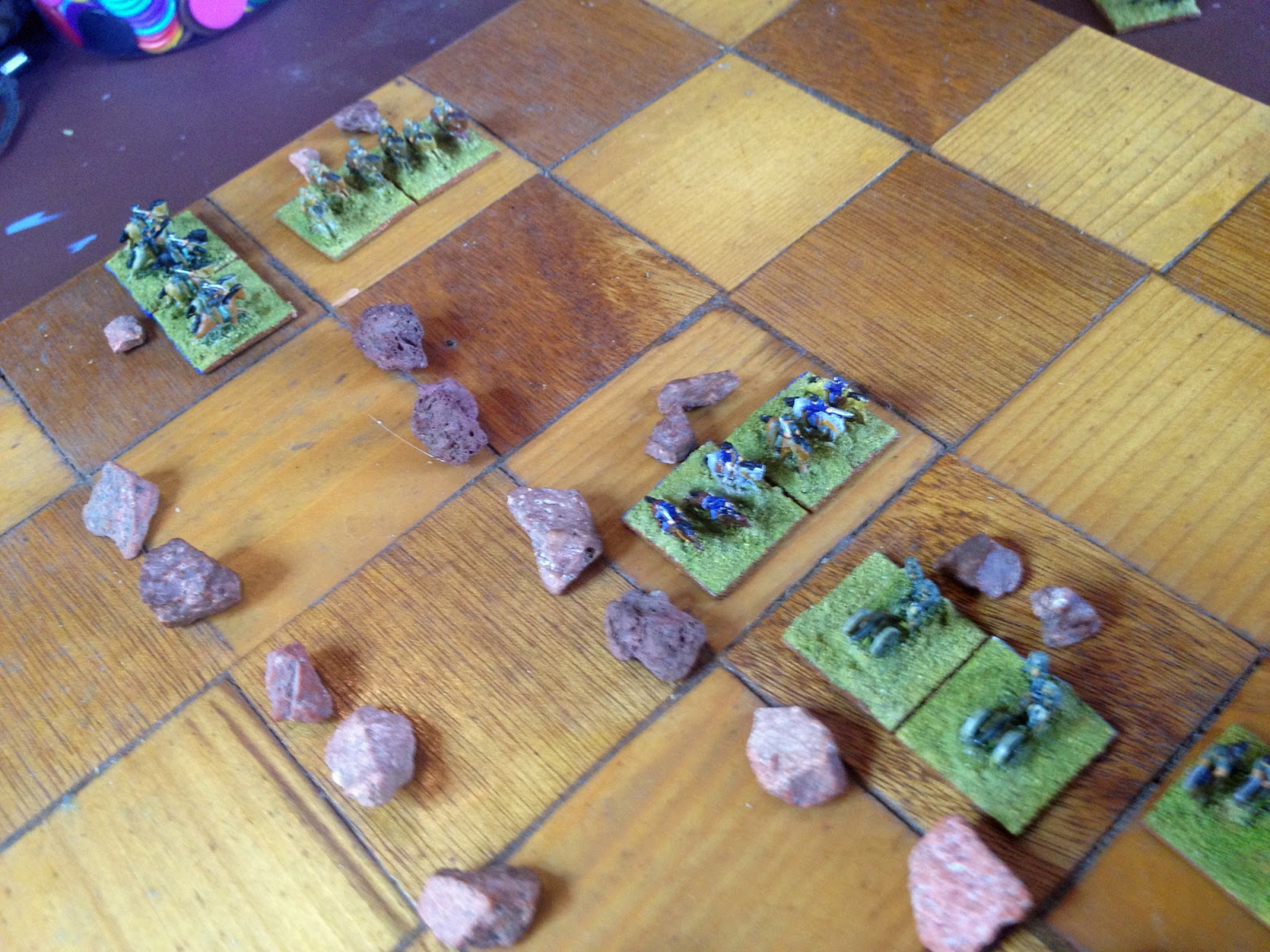 But the Union right collapsed under sustained pressure, and with four of the eight Union units lost I called the game a Confederate victory. 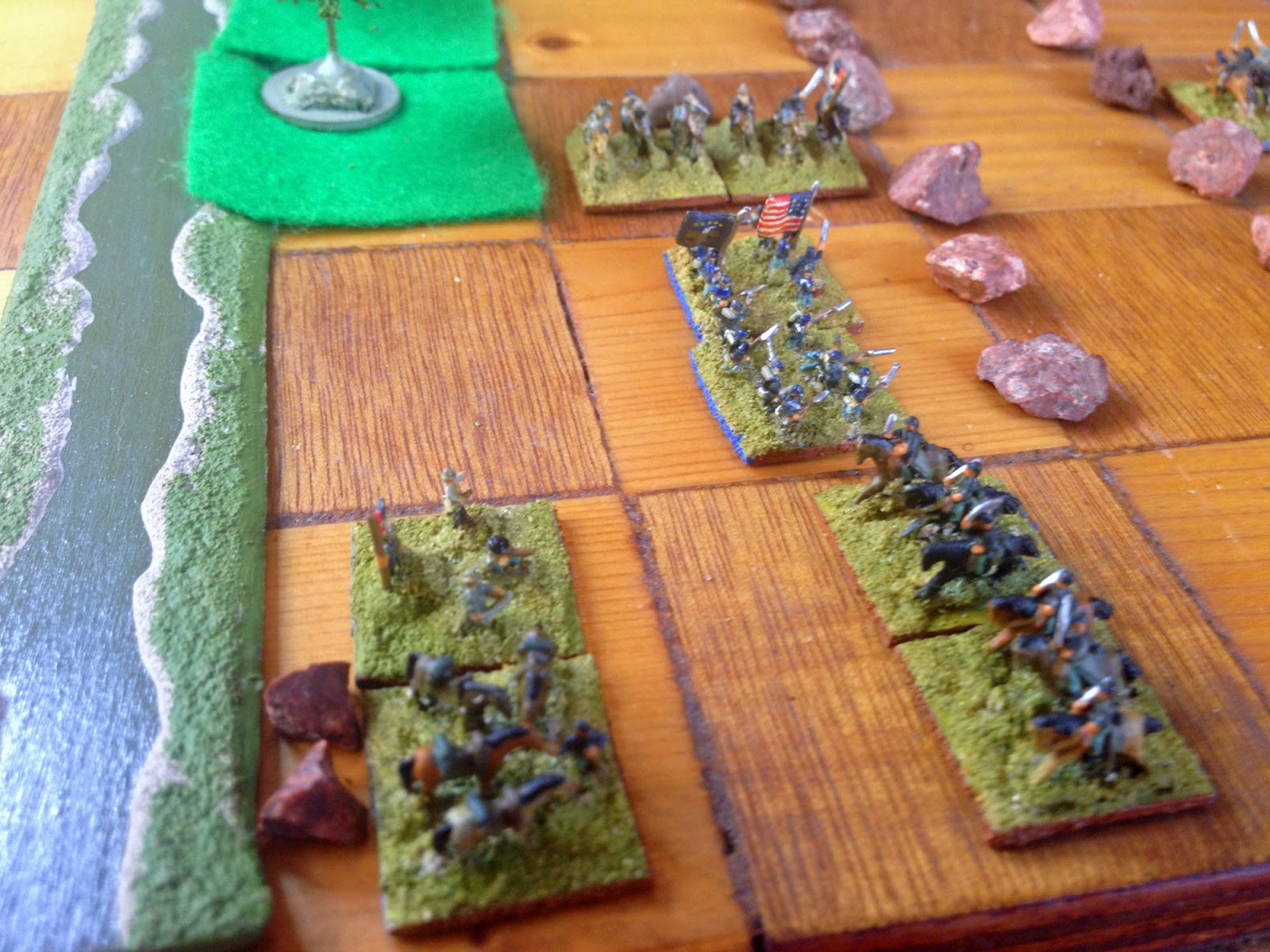 This was the position at the end of the game, with a strong Confederate left flank and the Union looking a bit feeble everywhere. 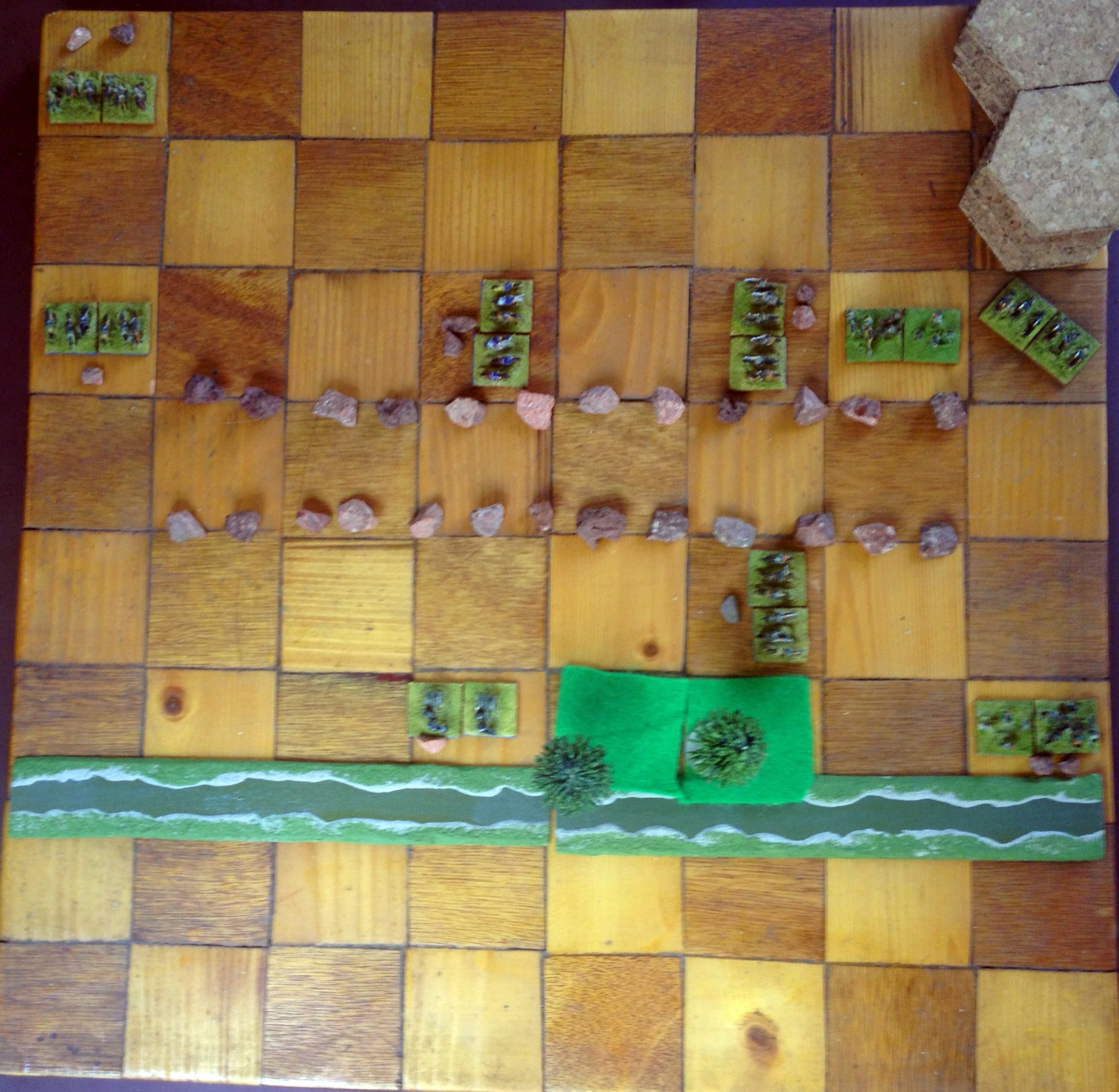 The game played quickly. Indeed I decided to play it again, but didn't bother taking any more pictures. The Confederates won again, but it was closer this time as the Union concentrated their infantry, making the most of their heavier fire-power over the cavalry.

The rules worked well for this battle, and it was as much fun to play as the original game.