The Gong Garage Gamers' first game of 2015 was a refight of the 1758 Battle of Zorndorf, using Maurice. We played it as a doubles game, each player commanding the equivalent of a standard Maurice 100pt army. The Prussiand had the Lethal Volleys and Oblique Order national advantages, which made them deadly shooters and made their infantry more mobile, whilst the Russians had Artillery Academy and Rally To The Colours, which made it easier for them to take of disorder markers and allowed their artillery to reroll hits when bombarding.

Here's the setup. We mostly used Mark's 10mm figures (which may or may not have been Prussians and Russians - I forgot to ask), but my Risk-figure Cossacks put in an appearance on the Russian side. On the left of the picture are the Prussians, under the command of Ralph and John. Mark and I commanded the Russians to the right - I had the command nearest the camera. 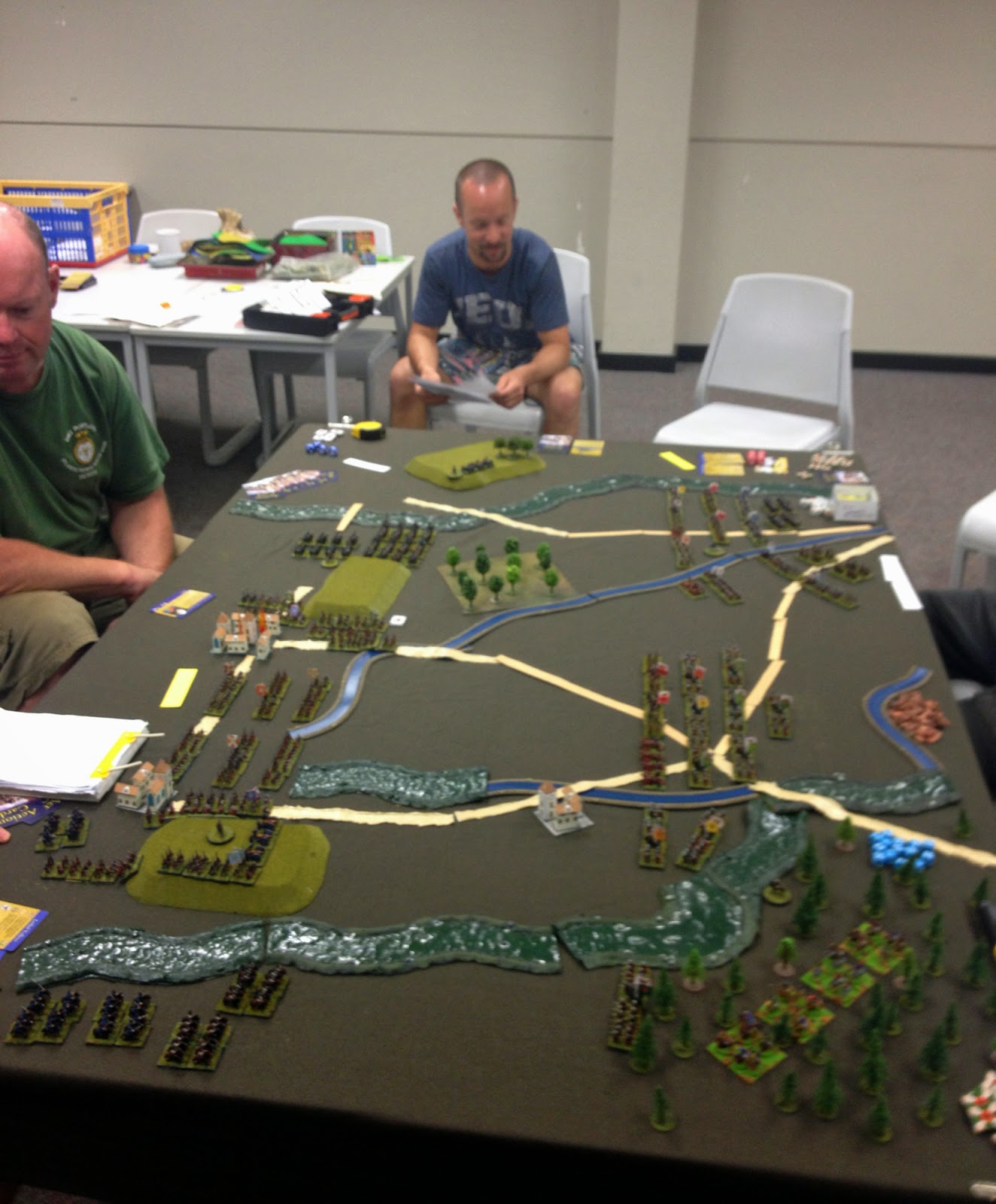 I deployed first. I had assumed that Mark would deploy his command as an extension of mine; instead he left a significant gap in our centre, with nothing covering it but some artillery. This was to be significant. 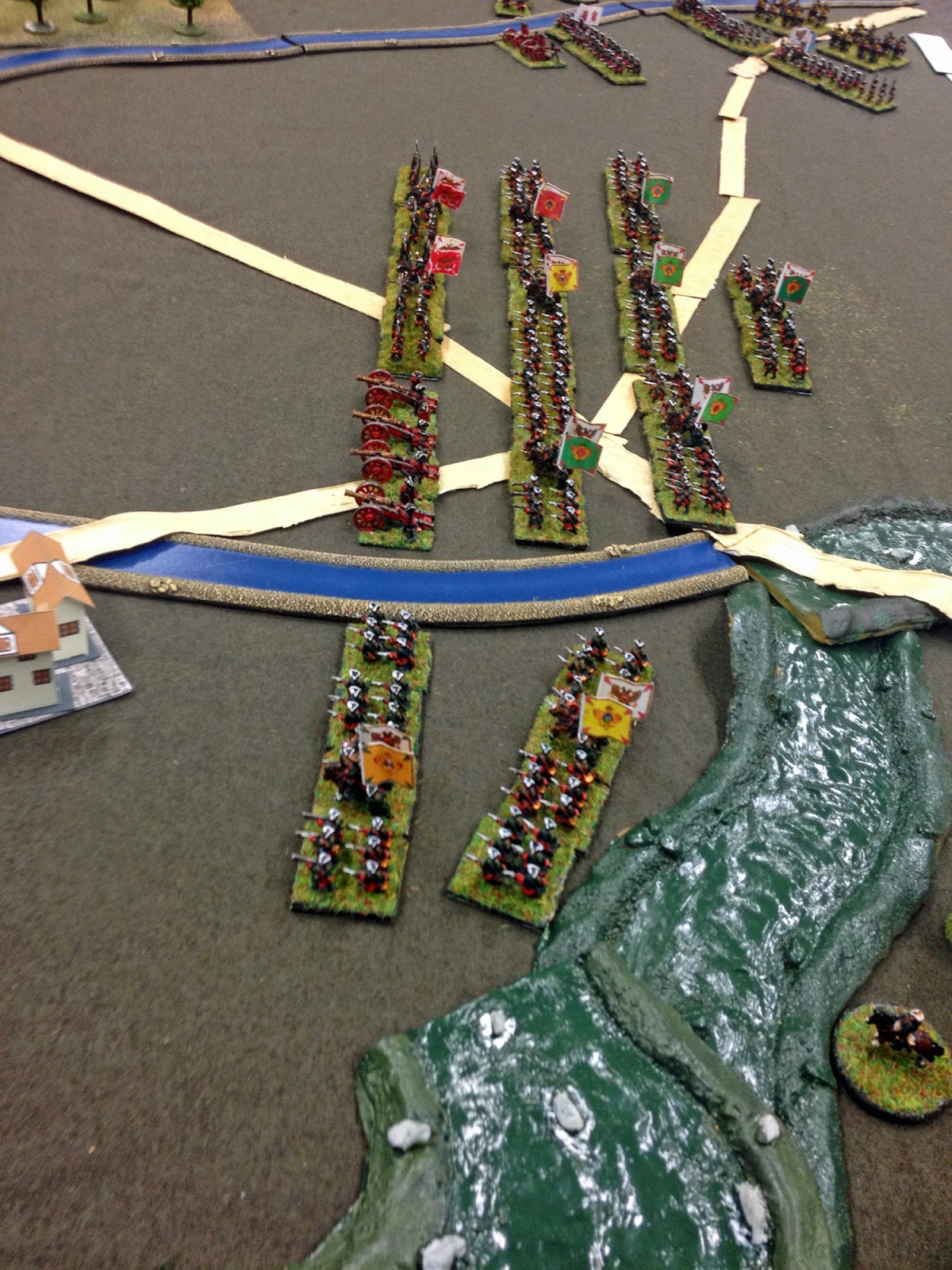 The Cossacks were deployed in the woods on our extreme left. My plan was to lead off with them, occupying the Prussians' attention with a flanking move. 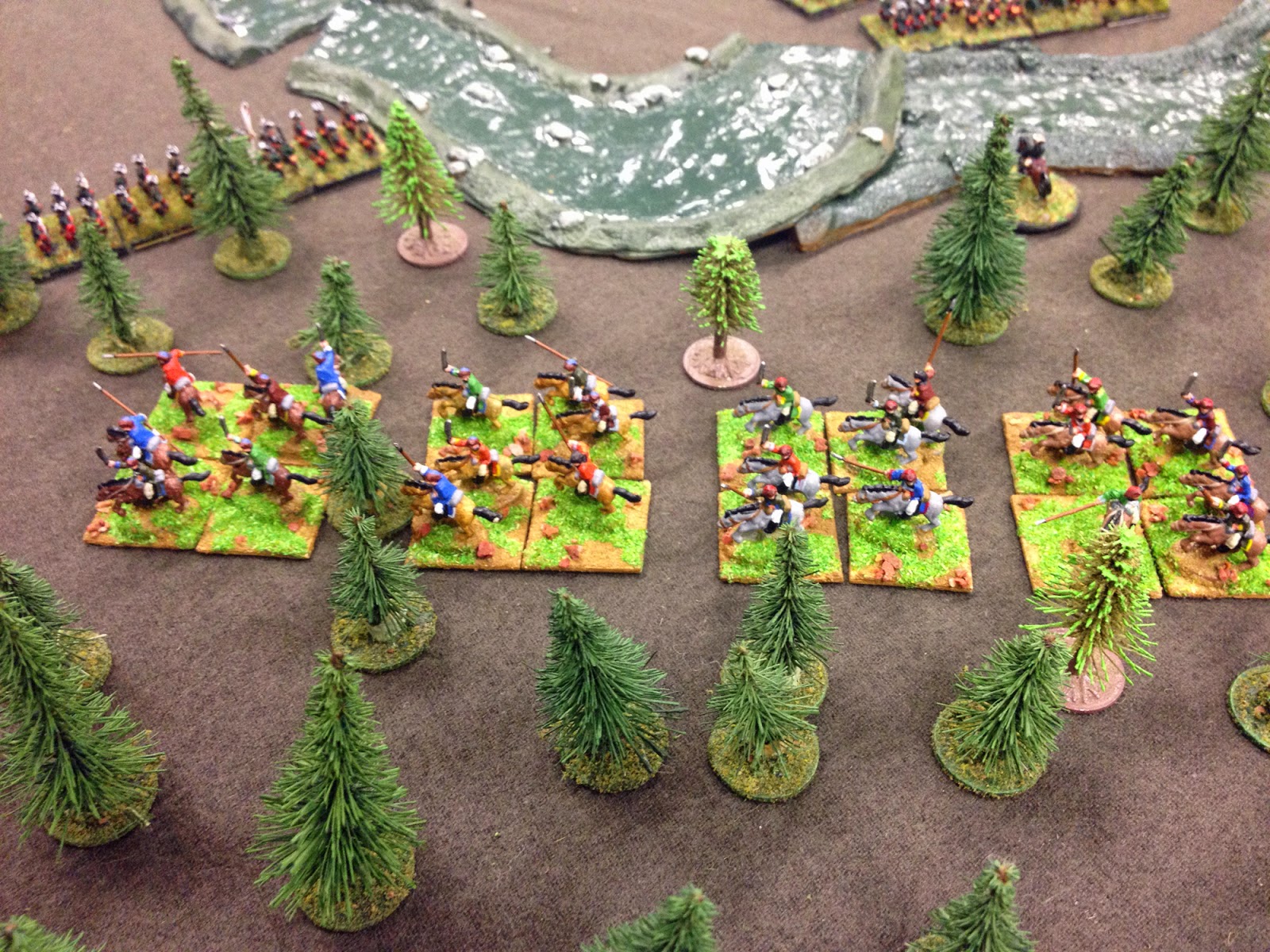 Ralph and John had, indeed, spotted the gaping hole in our deployment, and Ralph sent the cream of his infantry straight into it. Both armies had significant quantities of conscript infantry, bolstered by regulars. But the Prussians had a couple of elite units and these led the attack. You can see the Prussian columns here. Changing the facing of a line is quite hard in Maurice, especially close to the enemy, so the entire left flank of my triple-line of infantry was in danger of these Prussian columns doing a right face and pouring their Deadly Volleys into it. 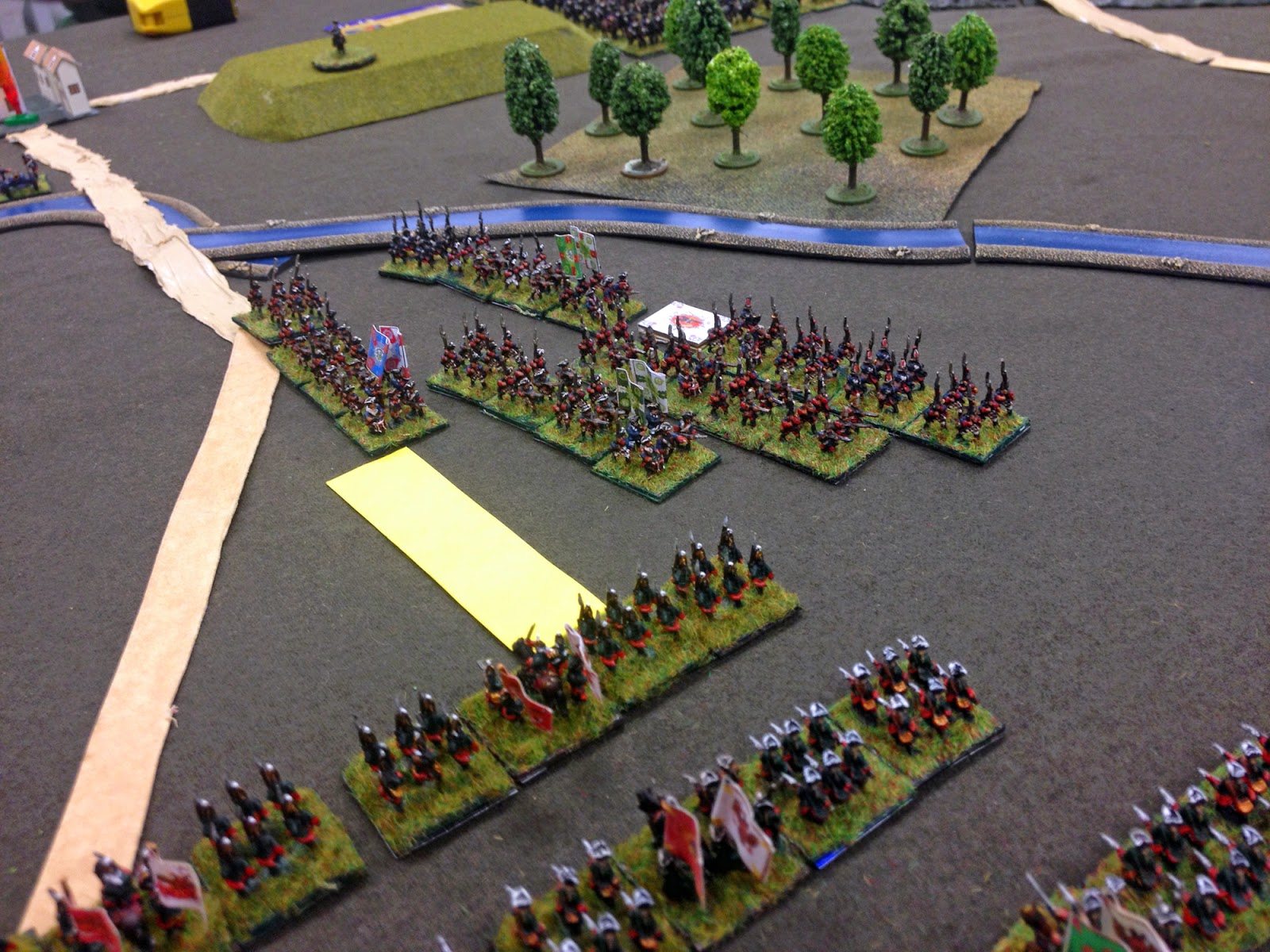 I redeployed units as best I could to meet the attack, whilst Mark provided artillery support and was encouraged to maybe, just maybe, march a few units over to cover the gap that he'd left in the first place. 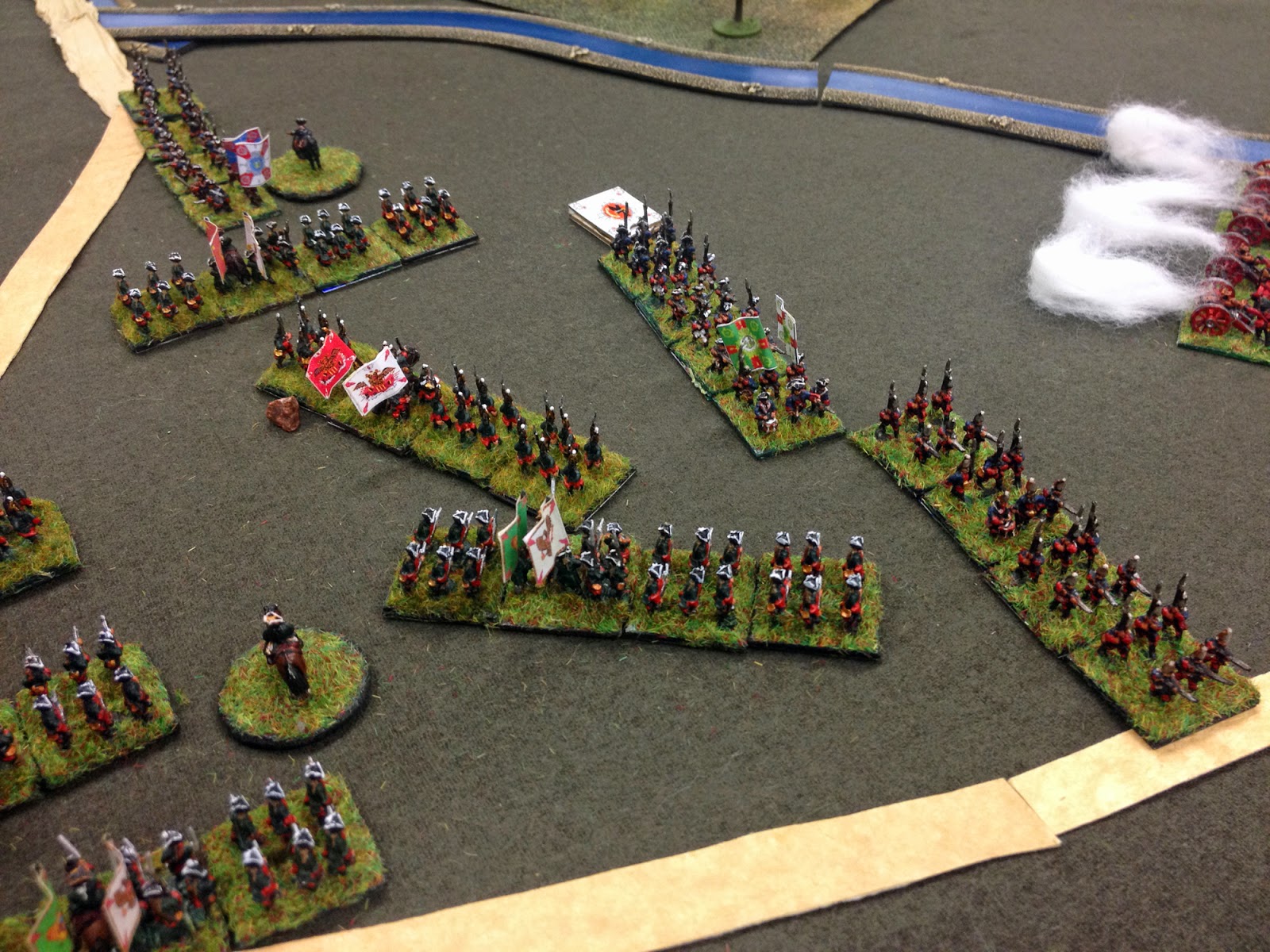 The artillery was suitable effective, actually destroying one Prussian unit. My infantry was able to hold some others, and with the support of Russians from the right we halted the Prussian attack and started to eliminate their infantry who were now caught between two fires. However Frederick himself led some elite infantry right into the Russian rear, where it deployed and began to pour deadly fire into the ranks of the conscripts there. 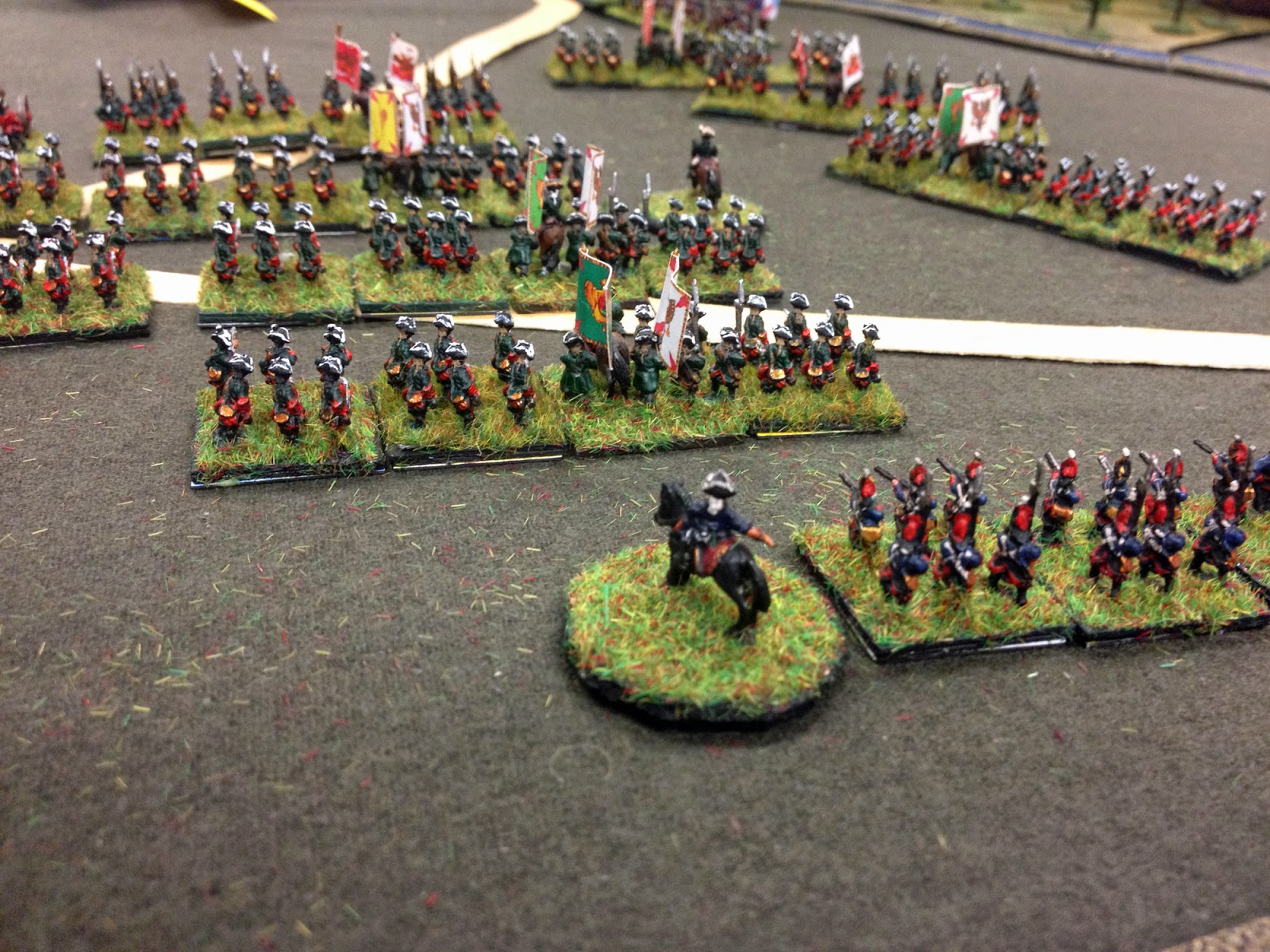 Elite infantry is very resilient, and it took a bit of effort on our part to drive them off. A flank charge by Mark sealed the Prussians' fate. 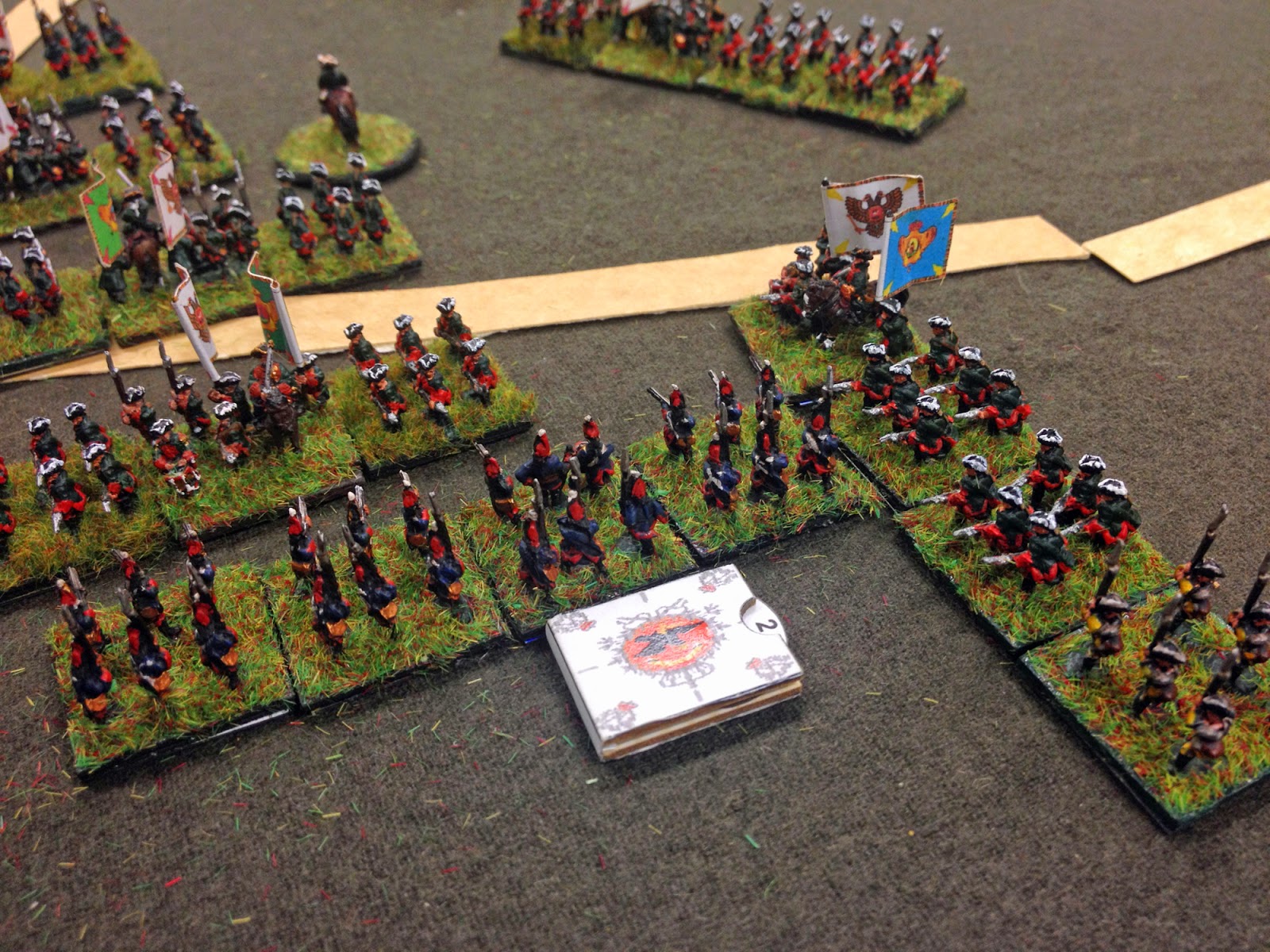 On our left the Cossacks had barely advanced before John's infantry was lined up and facing them, pouring volley after volley on any of them daft enough to leave the cover of the woods. My command efforts had been focused on the attack on our centre, but I was able to shift it just in time to extricate the Cossacks before they were slaughtered. For the rest of the battle the Cossacks lurked in the woods, but their presence pretty much made John's flanking move in that area unviable. 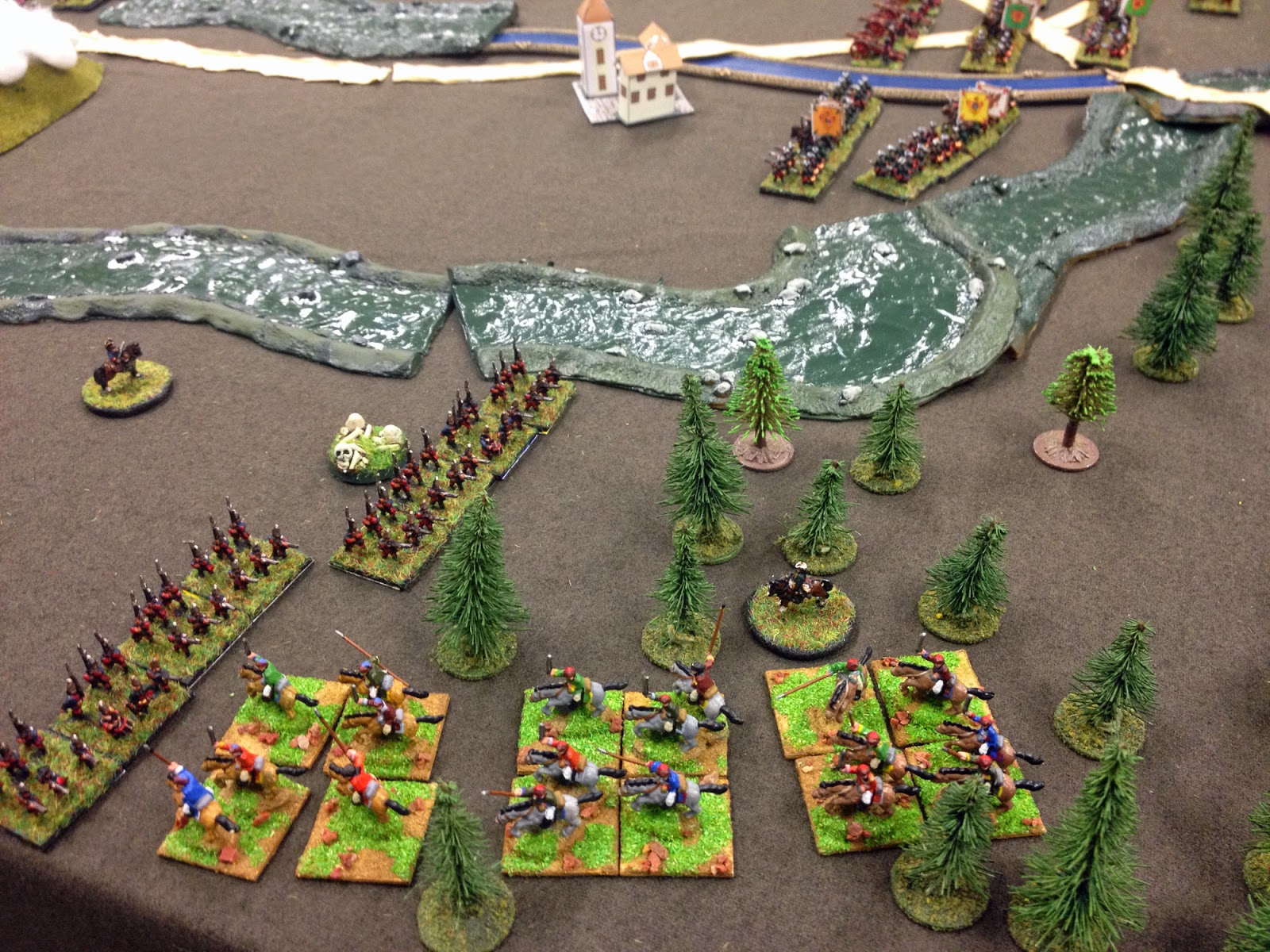 Having left the cream of his infantry in our rear to keep us occupied, Fredrick now ordered his cavalry to charge the Russian right. They moved out in columns ... 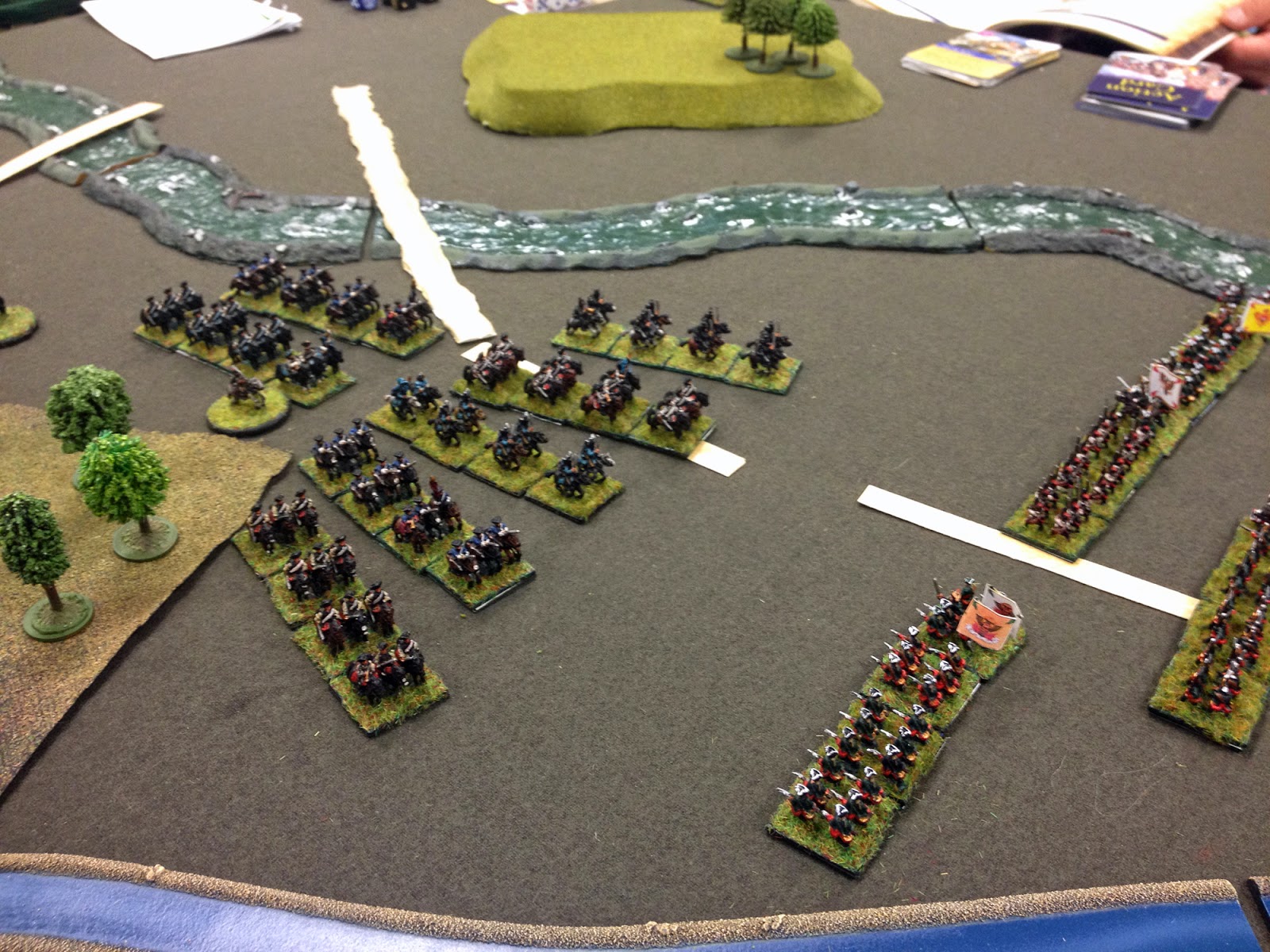 ... then formed up and ploughed straight into our troops. With a suitable event card the attack was far deadlier than I have generally seen cavalry attacks to be in Maurice. 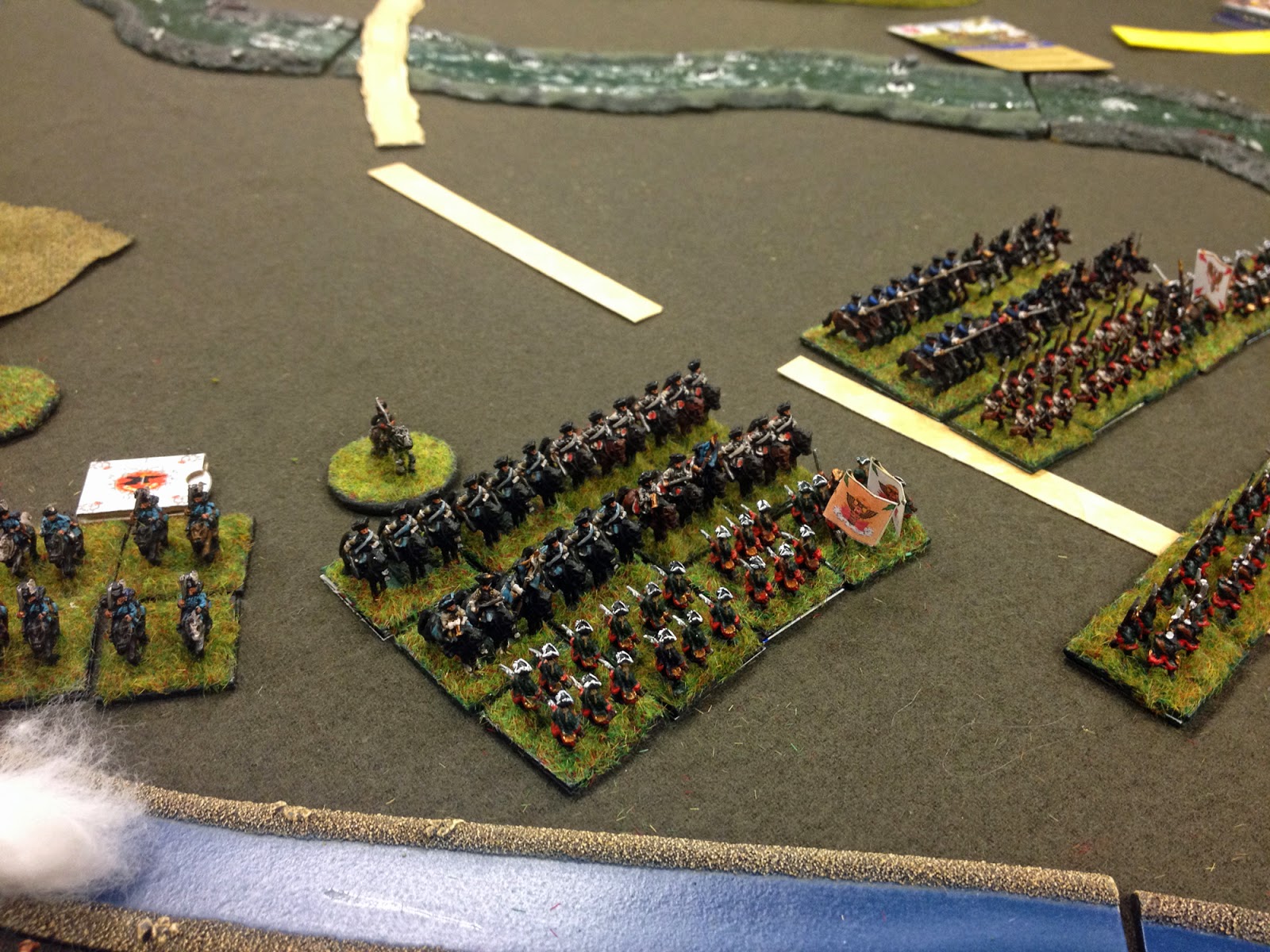 In one round we lost three units of infantry and two of artillery, for no loss to the Prussian horsemen. Our own cavalry was hiding behind the dense infantry line, unable to counterattack. 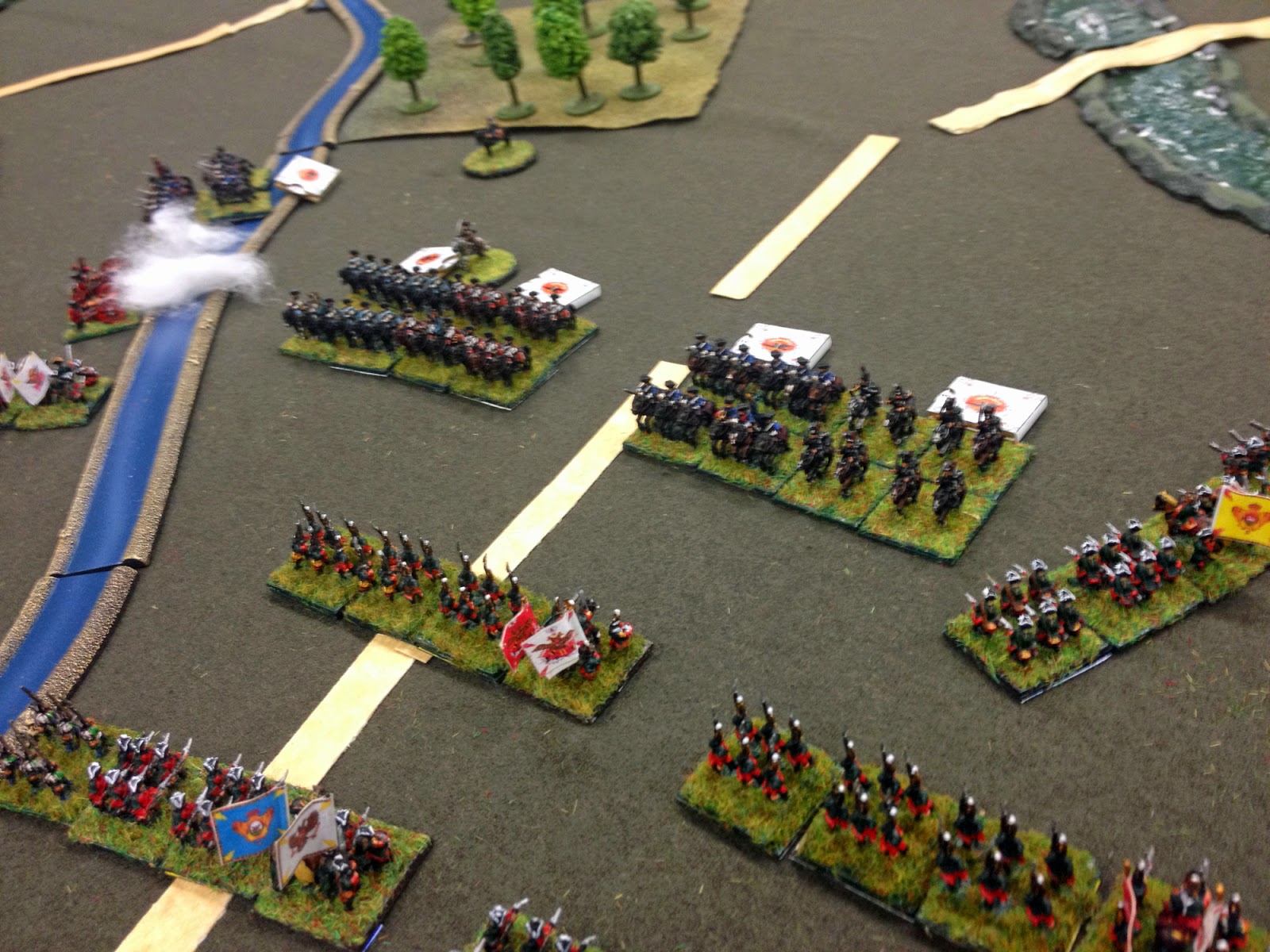 However at this point we called the game, partially due to time and partially due to Ralph having to leave and John, the remaining Prussian commander, feeling that their army had pretty much shot its bolt. Whilst their cavalry attack had been a success, the troops were somewhat worn, and facing a fresh second line of Russian infantry, ready to shoot at them. It was obvious that the cavalry would have to withdraw to rest and recuperate, but there were no Prussian units left on that flank to take their place. John was faced with no option but to advance his infantry straight forward, and unsupported, into the Russian ranks opposite him, and this would have just led to a meat-grinder (not unlike the actual battle). Personally I think this may not have been too bad a thing to do as the Prussians had their deadly volleys, which would give them a real edge in the ensuing firefight. However set against this were the remaining morale points, which very much favoured the Russians.

The initial Prussian attack was good, forcing me to deal with two players on my own initially. In Maurice this is fatal, as you can generally only focus your actions in one place at a time, and shifting focus is not easy. However once Mark and I had plugged the gap, we were able to offer a slightly more active defence and hold the Prussians to some degree. Our national advantages helped as well; Mark was able to make use of the Artillery Academy ability to inflict real casualties on the initial Prussian attack, whilst Rally To The Colours brought some of our battered infantry back from the brink on at least two occasions. The Prussians never really concentrated enough infantry in one place to fully make use of their Deadly Volleys.

Thanks to Caesar for another fine scenario, one I think we'll want to try again.