It's not often you fight an action where the name of the rules and the name of the battle are the same, but that's what we did tonight, two days after the 209th anniversary of Trafalgar. And we used the 'Trafalgar' rules.

To be fair, we didn't fight the whole battle. Ralph devised a scenario which pitted the lead ships of Collingwood's column against the Allied ships they were matched against in the actual battle. It can be assumed that other ships were around; we just focused on a subset of the ones present.

Both sides had six ships. Peter and mark took the British, whilst I took the Allies. Ralph umpired and Dave watched. Caesar wasn't there, as he's spent the last three weeks building the chicken-coop to end all chicken-coops.

Here's the Allied ships. Their objective was to get more ships off the end of the table (where Dave is sat) than they lost to the Royal Navy. 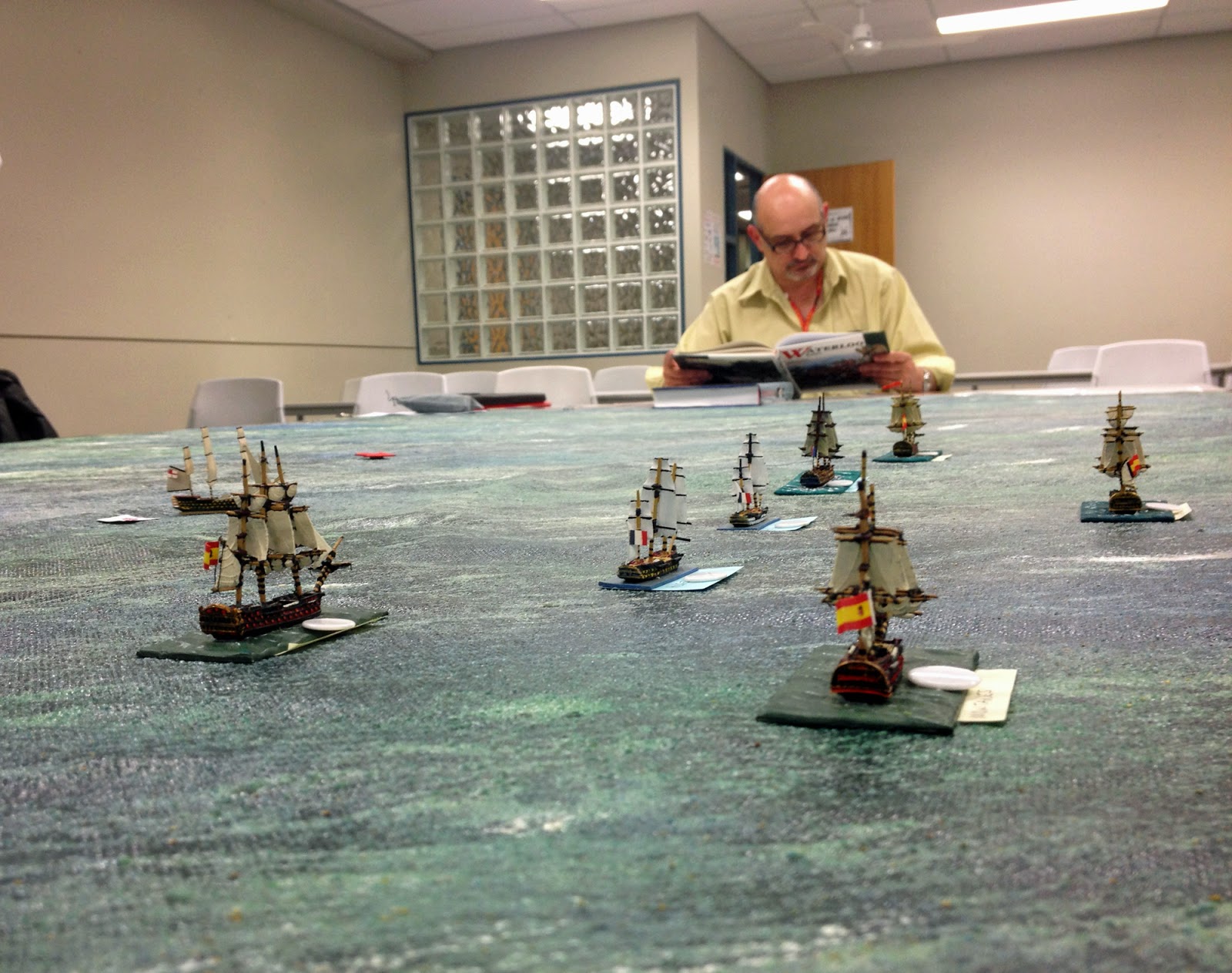 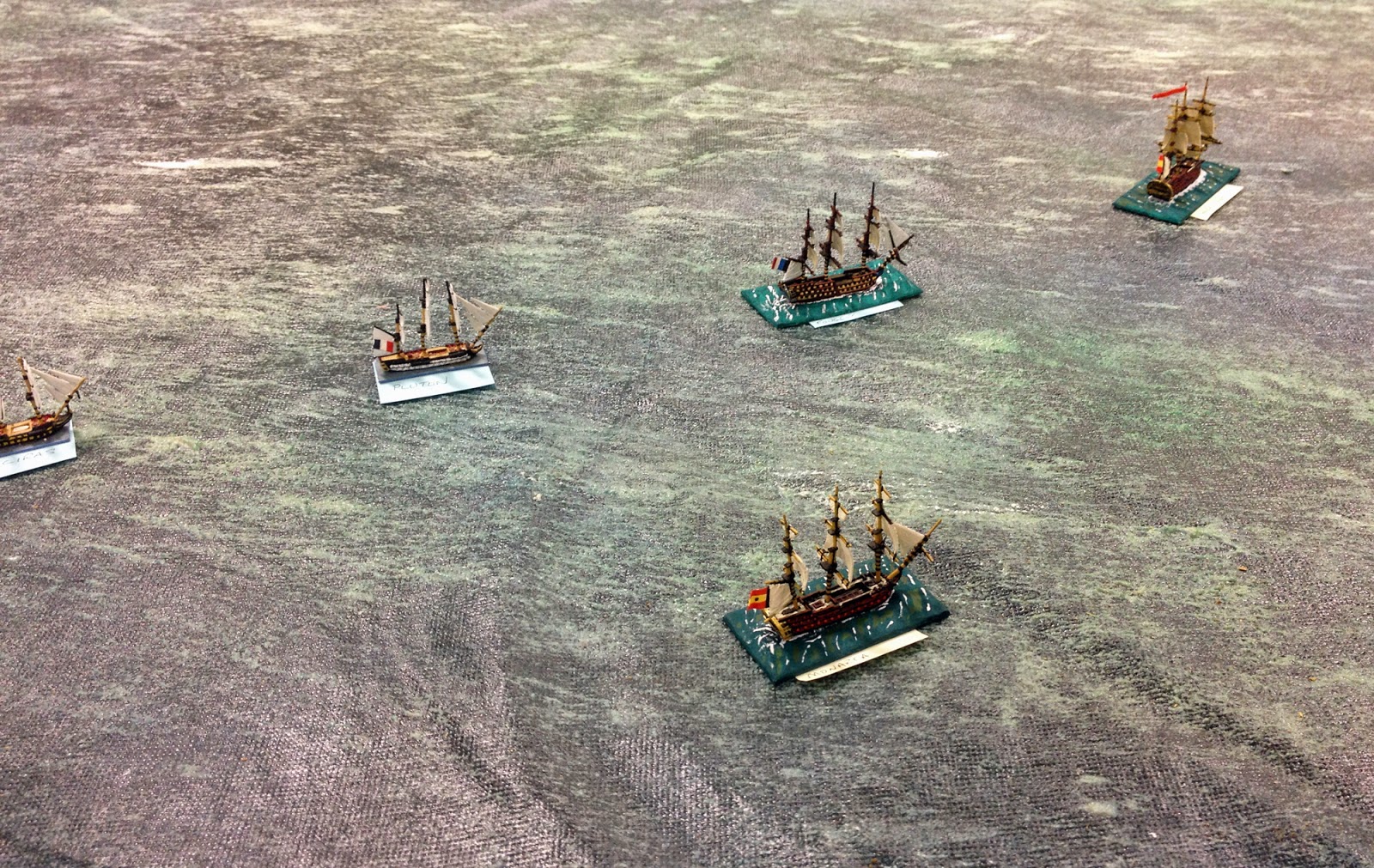 The Royal Sovereign engages two Allied vessels. Being ahead of the rest of the British line, the Royal Sovereign took a fair amount of fire and was rapidly dismasted by surprisingly accurate French and Spanish gunnery. 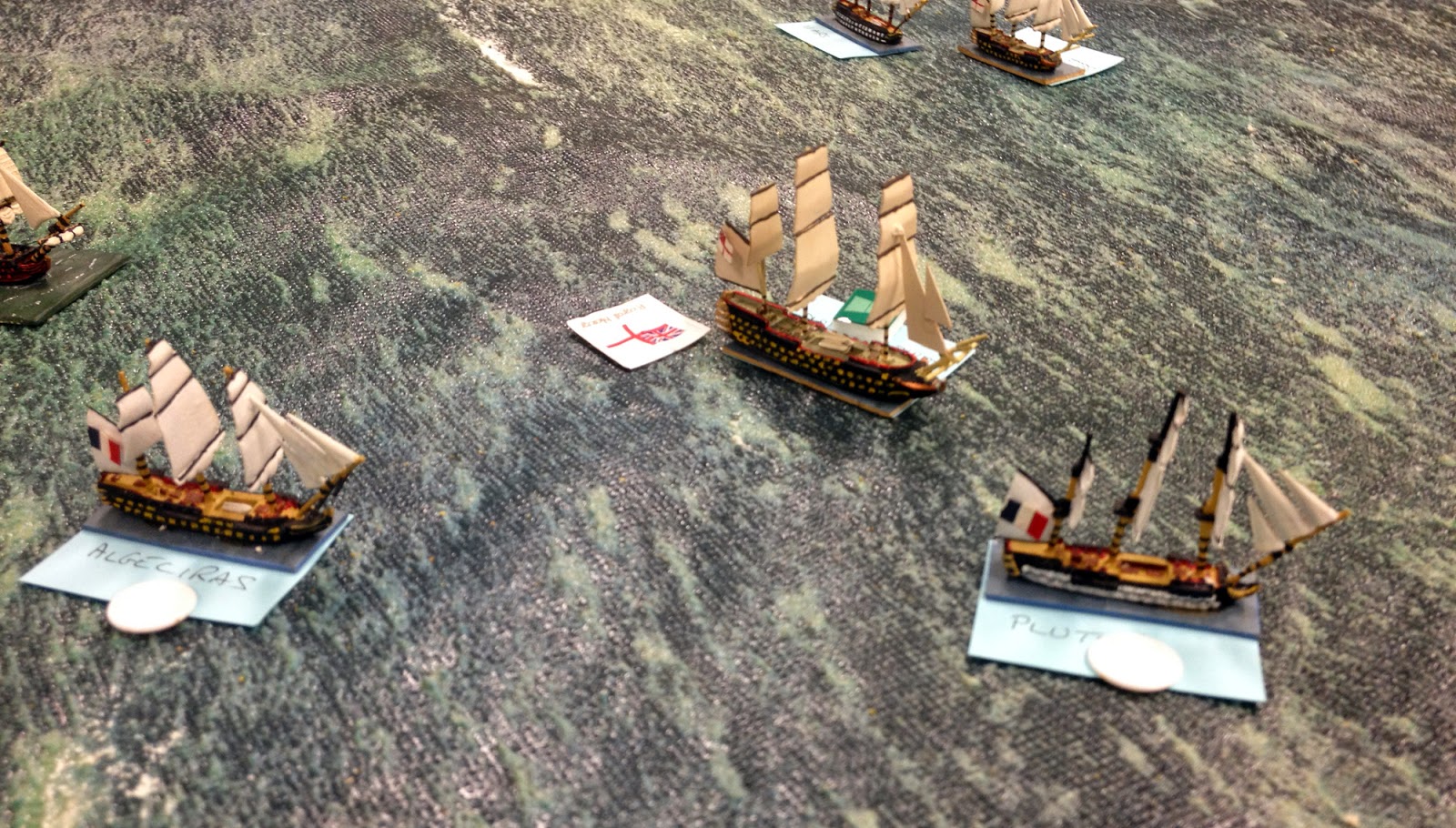 A long-view of the game. With the objective to get ships to safety I didn't hang around and fight the British; I piled on sail and ran for the edge, reasoning that the bulk of my ships could escape unengaged, thus fulfilling the victory conditions. 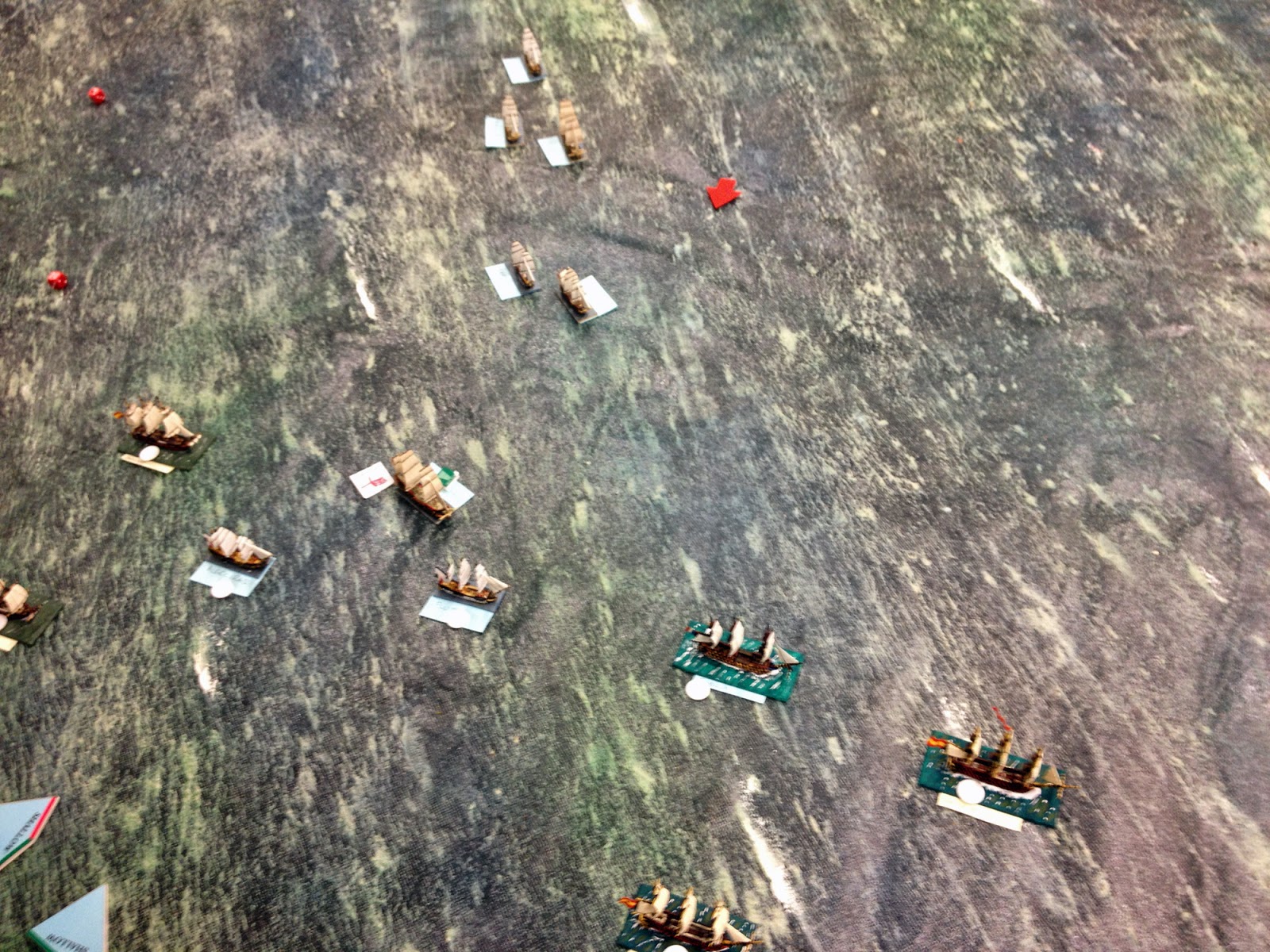 The Royal Navy gave chase, but with no speed advantage were never going to be able to do much. 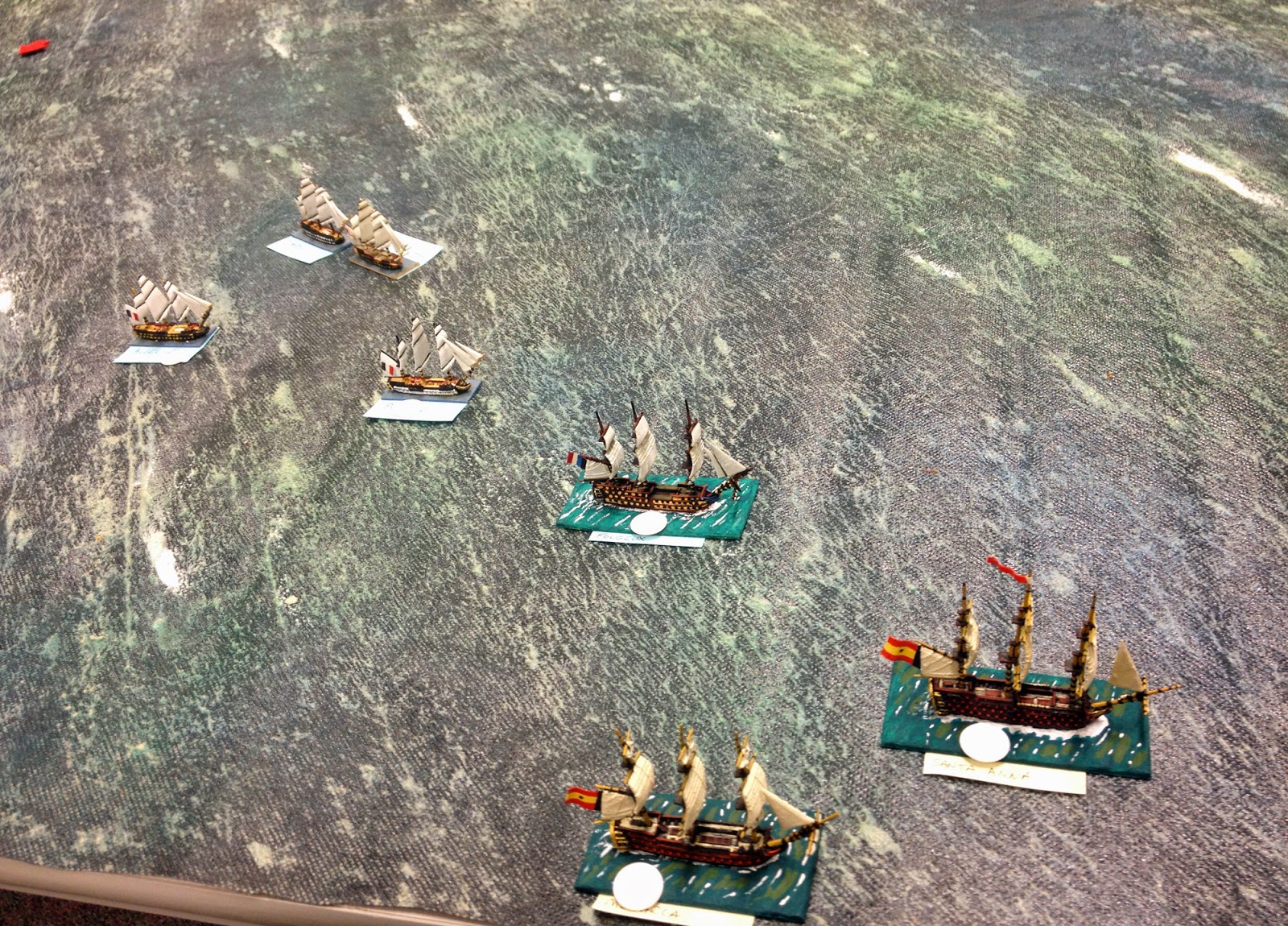 Two ships didn't make it. The French Algeciras lost a couple of masts, and was given a right pounding ... 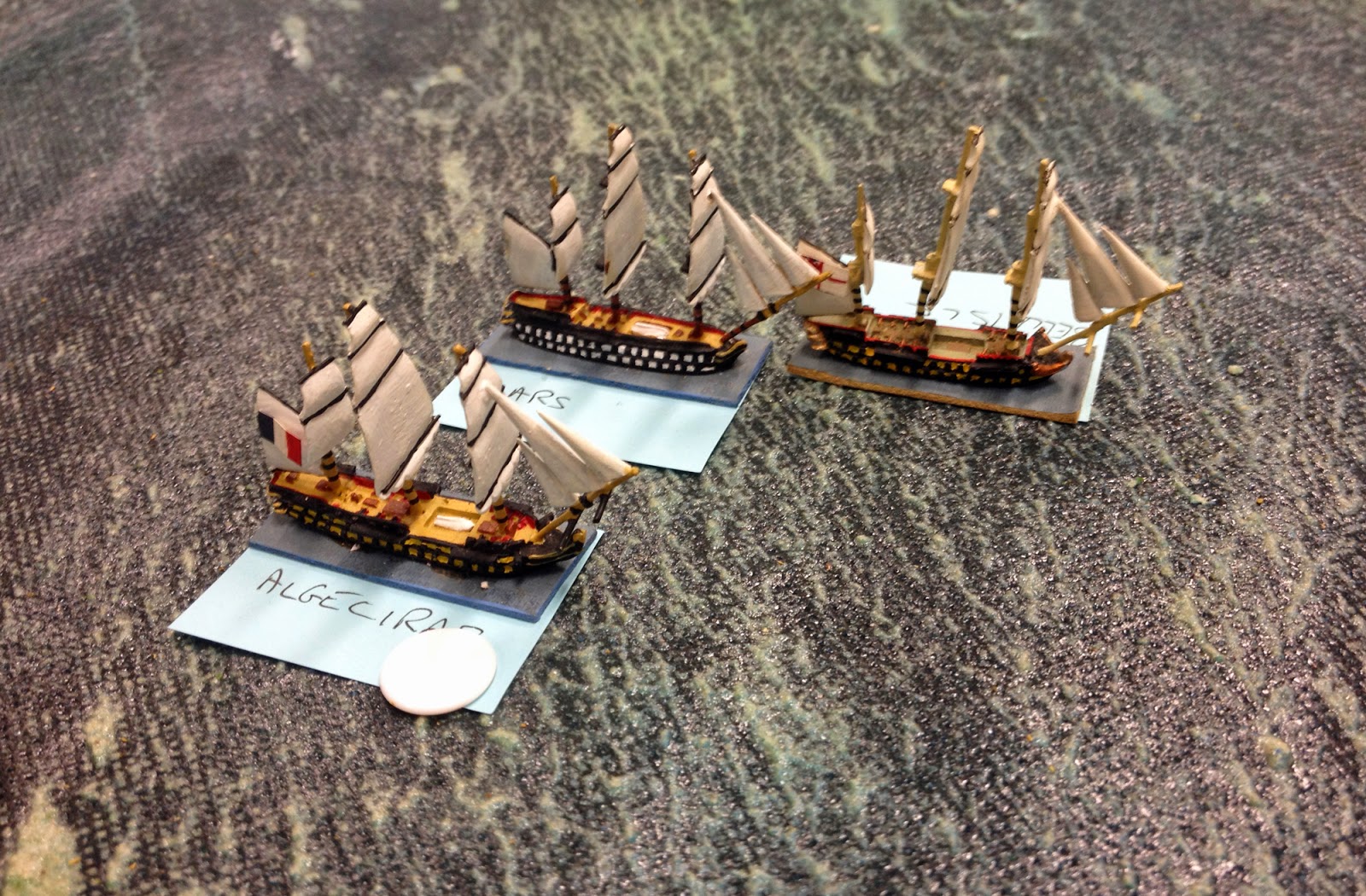 ... but not as much as the Spanish Bahamas, which was a shattered wreck by the end of the game. 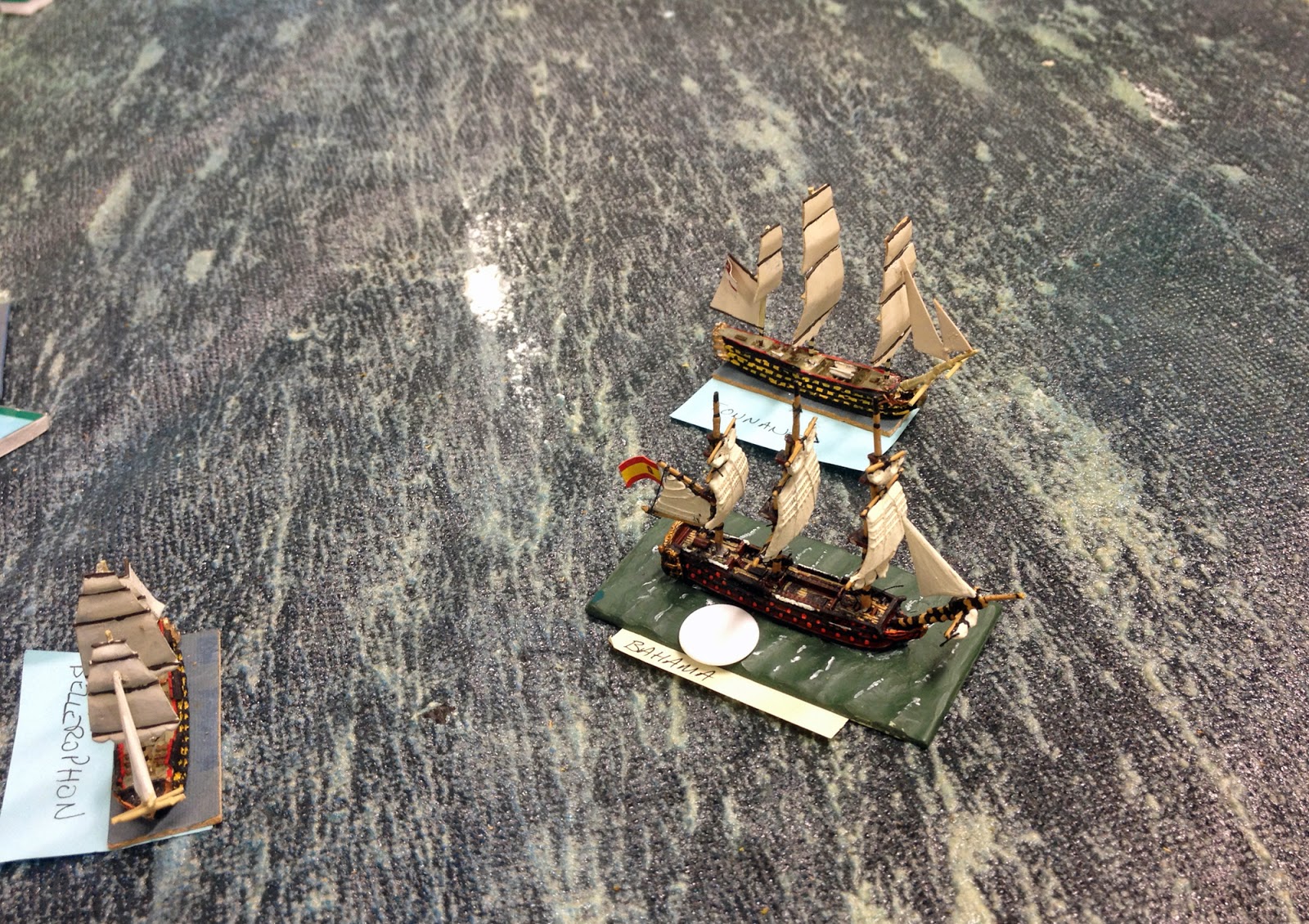 The Royal Sovereign was knocked out of the fight early on, but otherwise most of the British ships took relatively little damage. However the action was about the Allied ships escaping to Cadiz, not destroying the Royal Navy so for me this wasn't an issue.

I'm still not sure about 'Trafalgar' as a game, but I can't quite put my finger on what the issue is. Possibly it's that the rules I've mostly played ('Hearts of Oak' and 'Form Line of Battle' tend to keep they gunnery rules fairly simple, and concentrate their efforts on the sailing and management of the vessels, whereas 'Trafalgar' is the other way around with simple sailing rules and a more involved firing process. I'm also not really sure that the firing mechanisms emphasise differences between ships of different sizes or, it has to be said, crew quality. Perhaps I need to organise a game of 'Form Line of Battle' fairly soon, so we can do a comparison whilst this game is still fresh in or minds.
Posted by Kaptain Kobold at 06:58