I am playing around with the skill system (such as it is) for 'Munera Sine Missione', and decided that a mini-campaign was the best method for doing so, as it added a little bit of structure to my investigations.

I decided to take a single gladiator through a series of bouts, and see how they progressed in terms of skills.

Firstly I selected a gladiator - I went for one of my favourite Foundry poses, the female dimachaerus Herminia. I don't worry about mixing the gender of my gladiators in games, because that's how I roll. Purists are probably advised to stop reading now.

Herminia has a closed helmet, light armour and two swords, and starts with no skills

I then created a pool of opponents for her to fight, six each of light, medium and heavy gladiators, based on my own (in some cases arbitrary) criteria. In any bout I would roll to see what weight of gladiator she would face (1-2 Light, 3-4 Medium, 5-6 Heavy), then roll to see which gladiator in the pool she faced. I won't insult your intelligence by saying how I did that - there are six in each pool ...

The next stage was to see how skilled her opponent was. I rolled a D6, added Herminia's number of skills and subtracted 3, treating scores of 0 or less as 0. This meant that her opponent could have up to three more skills than she did. I then rolled a D6 for each skill the opponent had, discarded any duplicates, and then assigned skills based on the following table:

The discarding of duplicates meant that a gladiator may end up with fewer skills than initially rolled, but that works out OK and stops them from being too good. If the gladiator was one that Herminia had faced before, then I assumed that if they rolled fewer skills than they had in the earlier encounter they would just have those. If they rolled more, then I'd roll the dice, discard duplicates and any scores relating to skills that they already had, and only add in any new skills. But that situation hasn't arisen yet ...

So, onto the bouts.

Herminia's first opponent was a helmetless thraex, Rufina, who had the Agile skill. 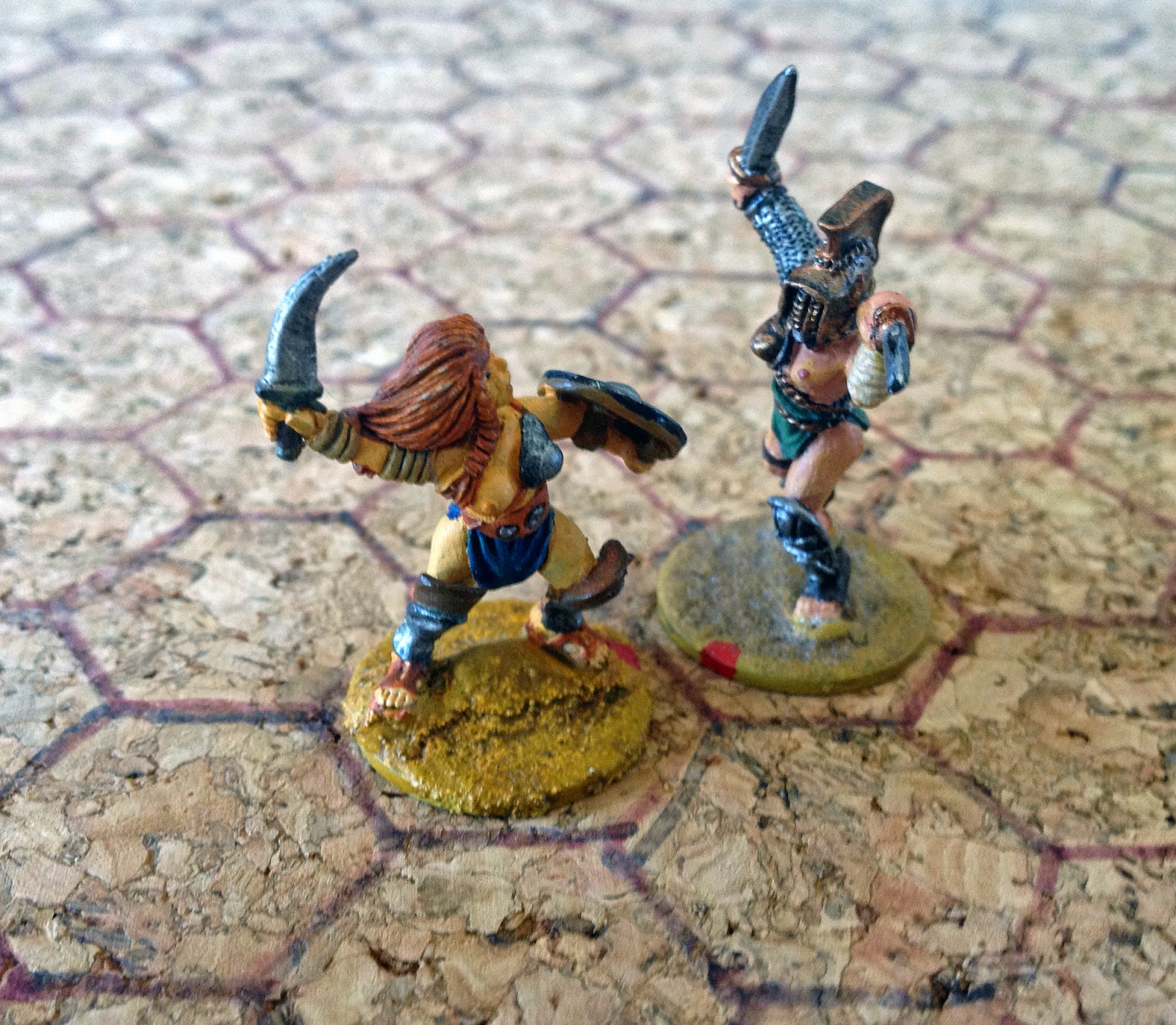 It didn't do her any good - Herminia slowly sliced her to pieces, and when she sought mercy she got none from the crowd. Which is odd, as they did a good job of cheering her on through the fight. This seems to be a regular result for Rufina, and it's obvious she's one of those cursed figures you get from time to time.

Anyway, this victory against a gladiator of equal or greater skill gave Herminia a skill, so I chose Attack. With two swords I reasoned that this would make her suitably deadly.

Her second opponent was Hippolytus. I ran him as something I'd read about on Wikipedia (I know, I know) - a retiarius who had chosen to discard his net. This gave him both hands free to use his trident, which gave it the armour-piercing ability. Hippolytus had no skills. 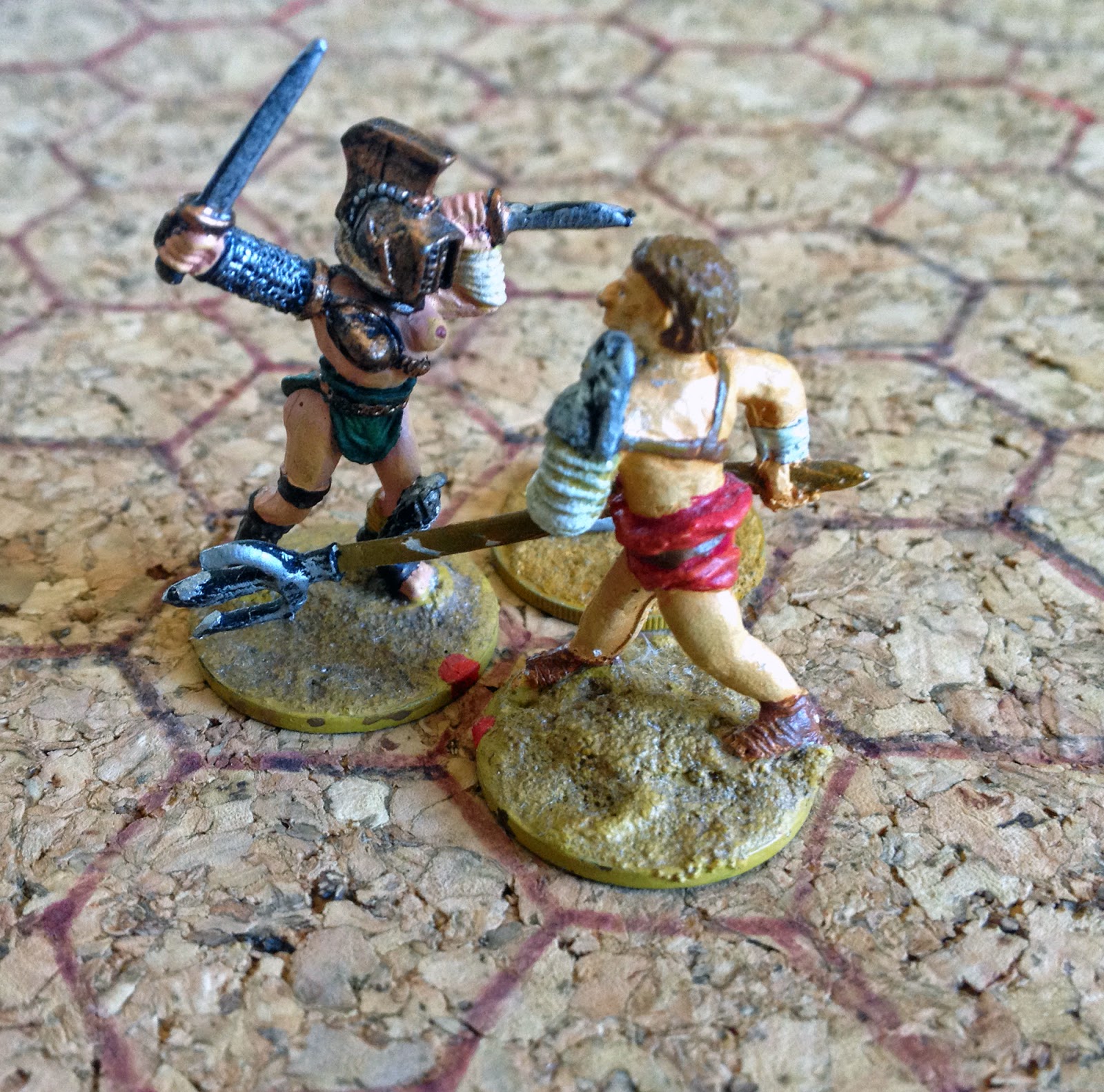 This was a short fight. They closed and Hippolytus got in the first strike, badly wounding Herminia, who immediately appealed to the crowd for mercy. The crowd granted it.

After recovering from her nasty wound Herminia found herself back in the arena, this time facing the barbarian gladiator Apollo, armed with a long spear and a large shield. Apollo was more skilled than Herminia - as well as having Defend, he was a crowd-favourite, with Celebrity and Crowd-Pleaser as well. 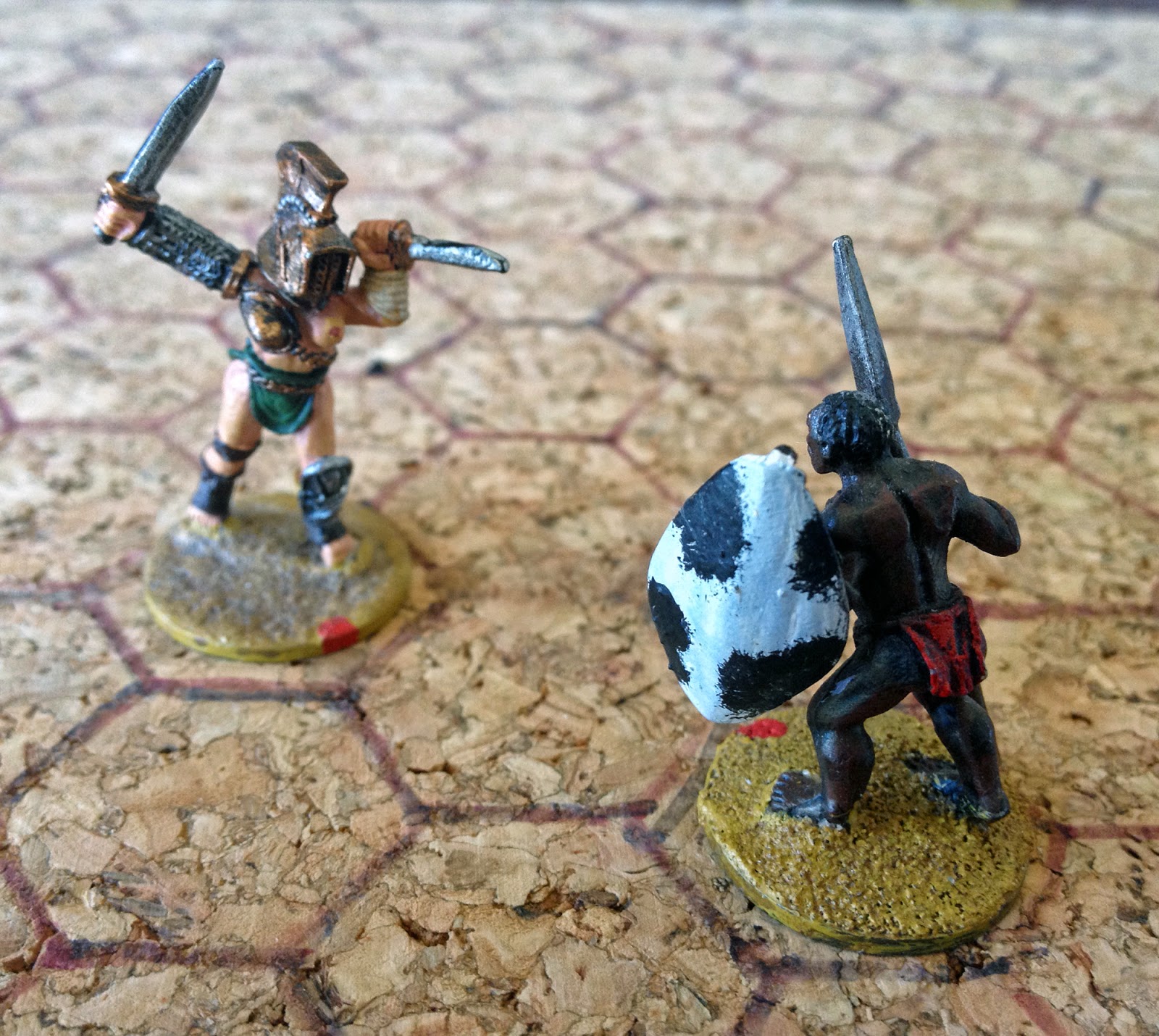 None of his skills did him any good. Despite the audience being behind him all the way, Herminia dispatched him without suffering any injury herself. her final blow mortally wounded Apollo, denying him even a chance to appeal to his adoring public.

Having defeated another more highly-skilled foe Herminia was due another skill, so I added Agile to her repertoire.

Her next bout saw her facing the very experienced dimachaerus, Spiculus, who fought without a helmet, giving him extra mobility. He had Defend, Agility, Strength and was a Crowd-Pleaser. He also proved a tough opponent, wounding Herminia with his first strike. 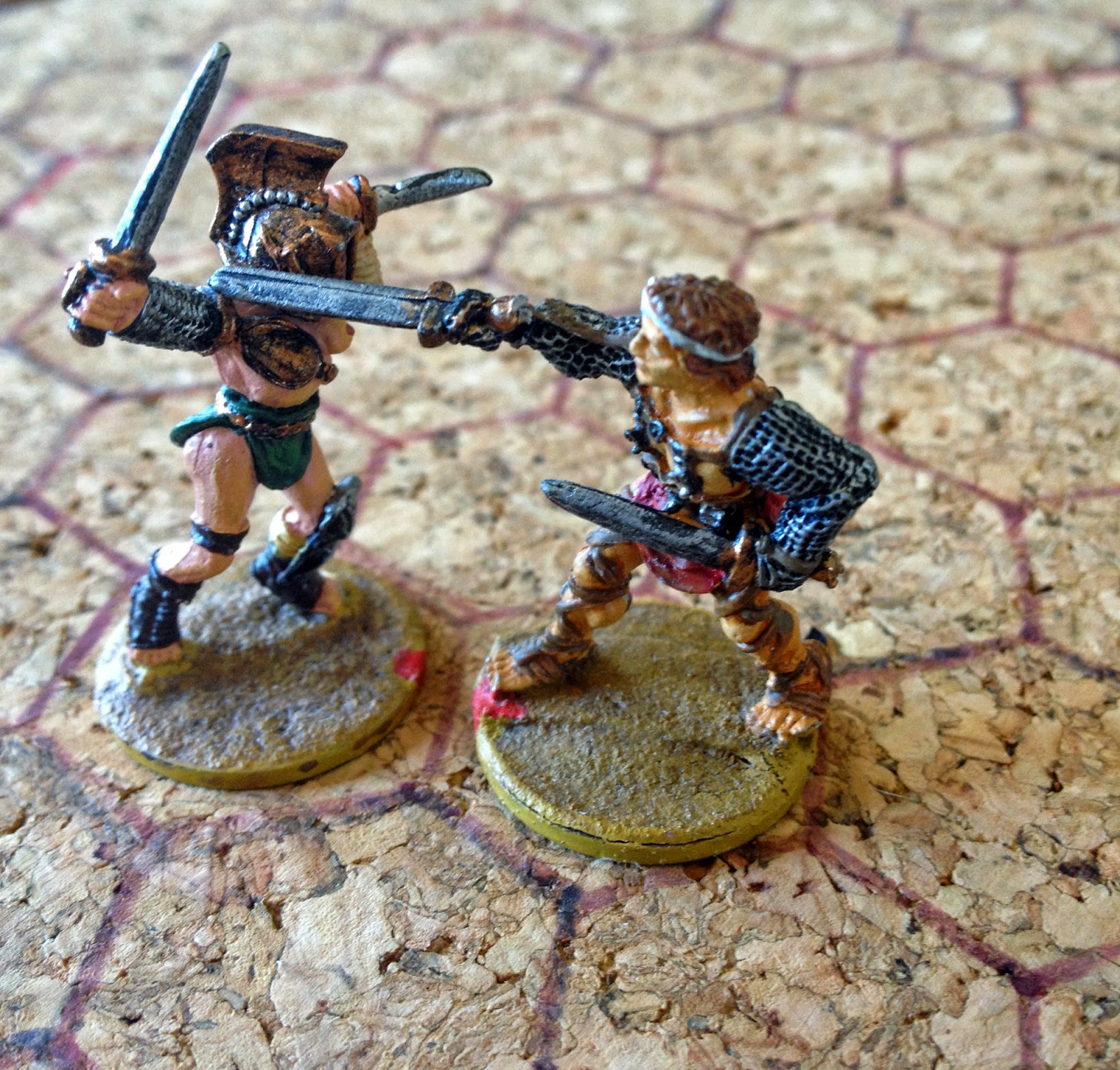 This was an epic fight, ranging from one end of the arena to the other. Both gladiators ended up seriously wounded, but it was Spiculus who eventually sidestepped the exhausted Herminia, and downed her, forcing her to appeal to the crowd. After such a good show they were more than happy to grant her mercy. 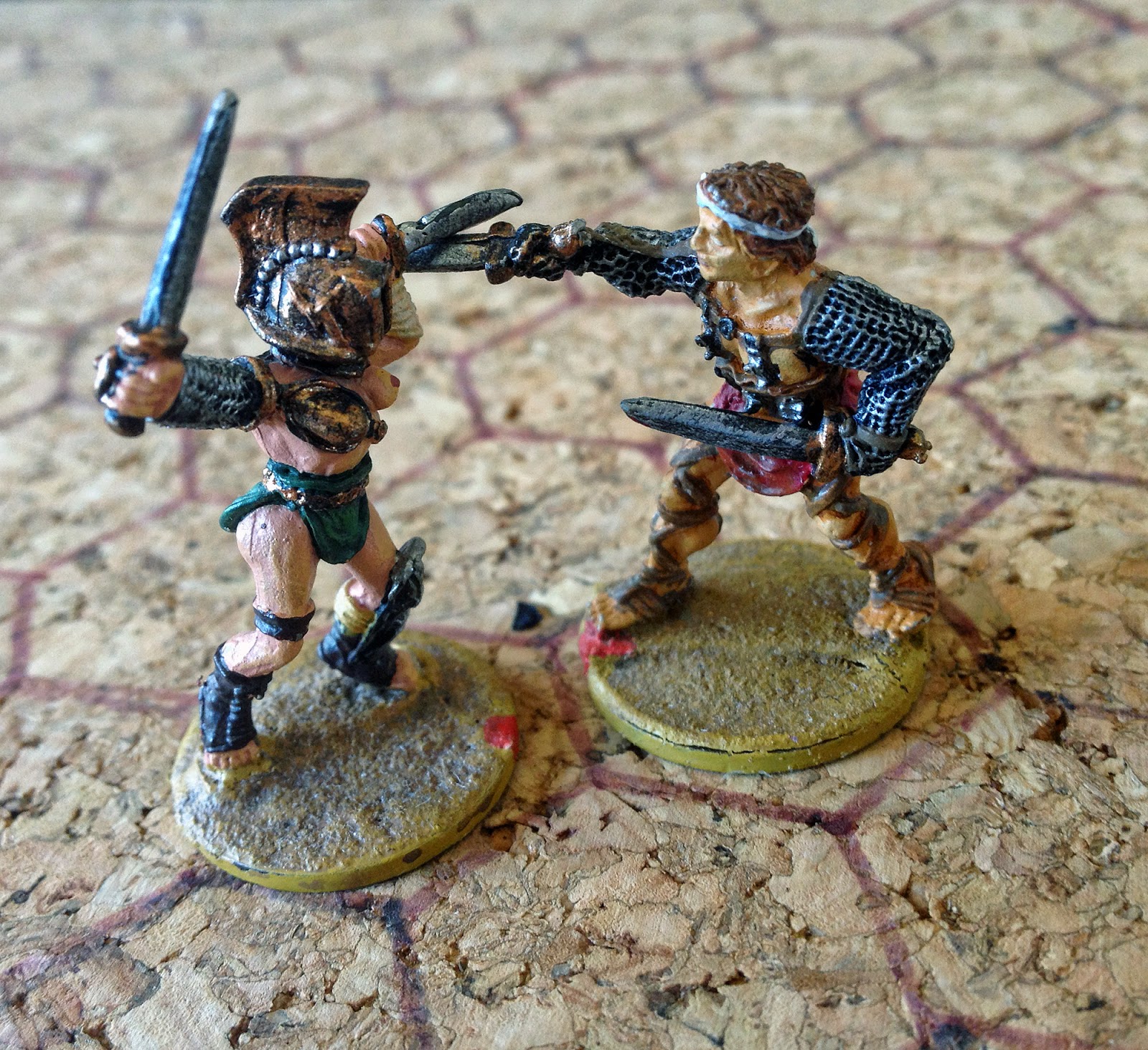 Another period of recovery passed, then Herminia was back in action. She now faced Danaos, who fought in the Greek-style (I suppose), with a helmet, large shield and long spear. As seemed to be the theme with her opponents, Danaos was a crowd-favourite, with Celebrity and Crowd-Pleaser, as well as having Strength. 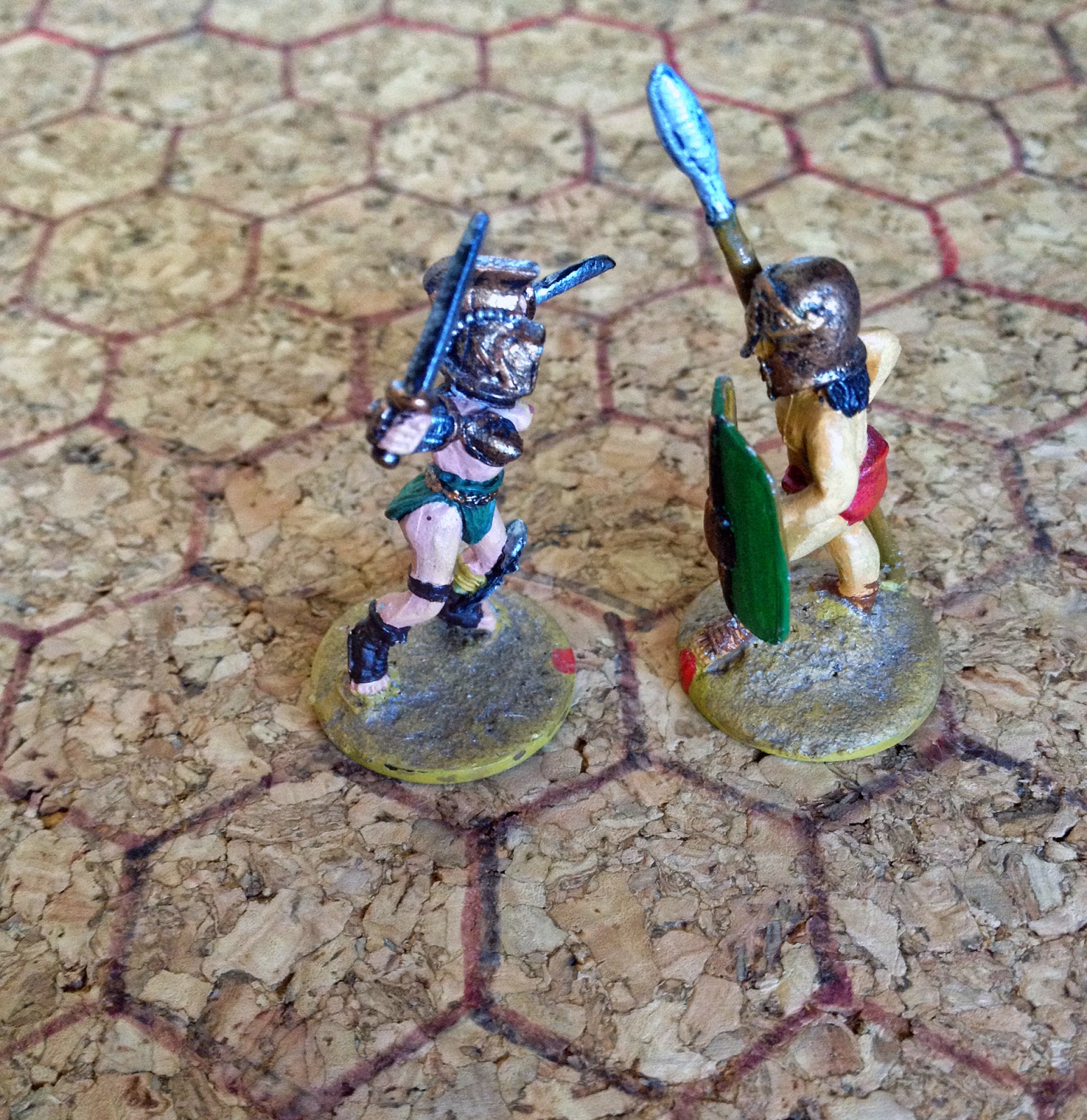 Herminia charged straight in, hoping to deny Danaos the space to use his spear effectively. She should have learned from her earlier fight with Hippolytus - he badly wounded her with his first thrust. She pressed the attack, but despite having no room to fight, Danaos fought her off, and wounded her again and again. She lost her helmet to one thrust, and one of her swords to another. Finally he smashed her to the ground with his shield, and she was forced to appeal for mercy. 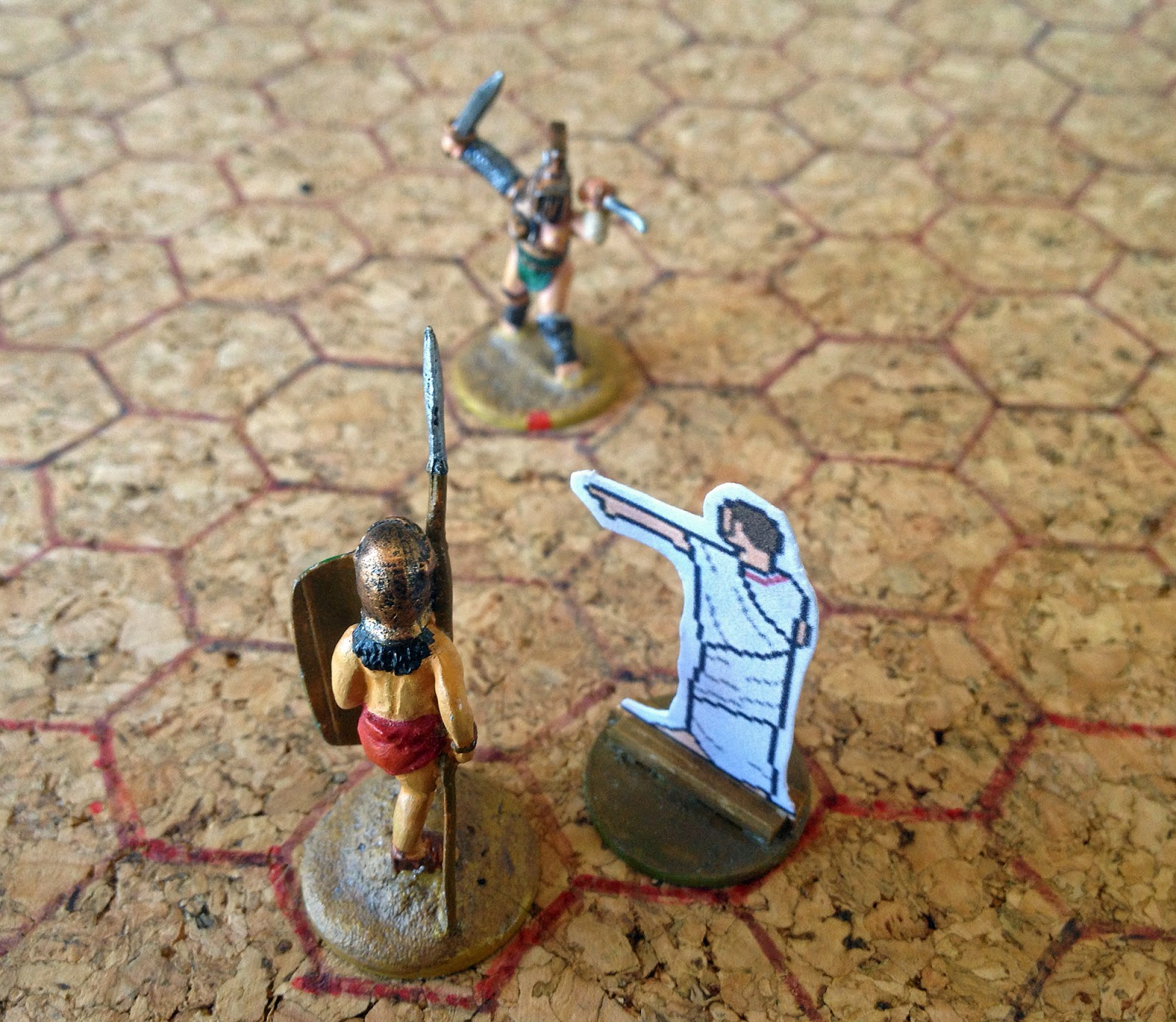 This time the crowd were behind Danaos, and Herminia's career, and life, was over.

The games gave me a chance to see some of the skills in combination with each other, and I'm fairly please with how they are working out. But I'll have to do this all again with another gladiator. I might also add in some kind of prestige points as well, just because keeping score is fun. My aim was to see if I could get a gladiator to survive ten bouts. Obviously that's not so easy.