Dogger Bank was a naval action fought between the British and Dutch in 1781. A British force, under Hyde Parker escorting a convoy in the North Sea encountered an equivalent-sized Dutch force under Admiral Zoutman doing the same. The convoys fled to safety as the two fleets engaged.

Both ships had seven ships of the line, some quite small. The British ships out-gunned the Dutch, but some of their ships were old and past their best. The Dutch turned onto the port tack and waited for the British attack. The eventual fight saw both sides battered, but it was the British that broke off the action.

We refought this battle this evening to introduce the club to the 'Form Line of Battle' rules. Two of us had played before (Caesar but once) whilst the other four players were new to the game. People picked up the odd mechanisms quickly, though, and we got a good game before we had to call it a night. 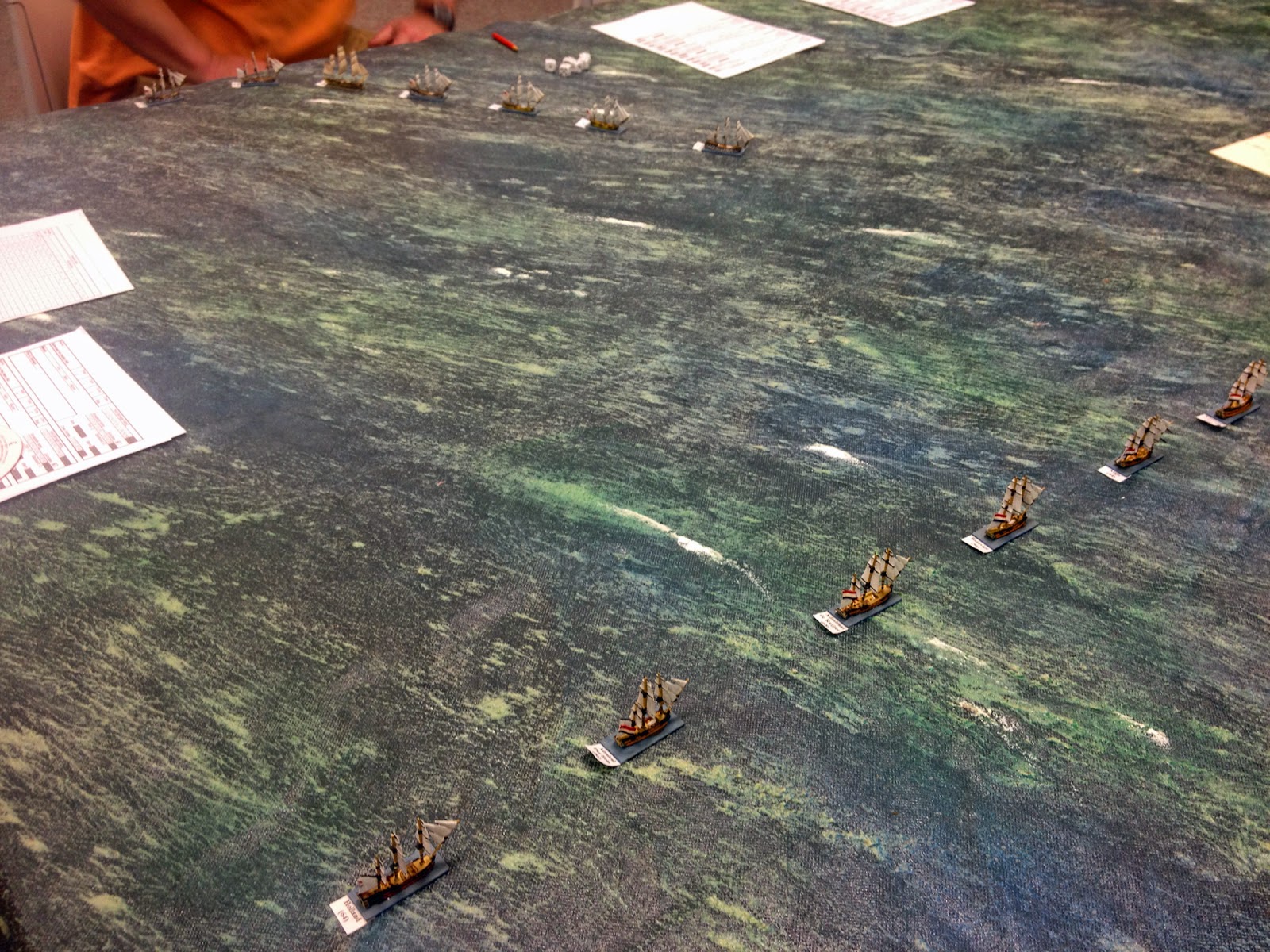 A view of the British line from the lead Dutch ship. 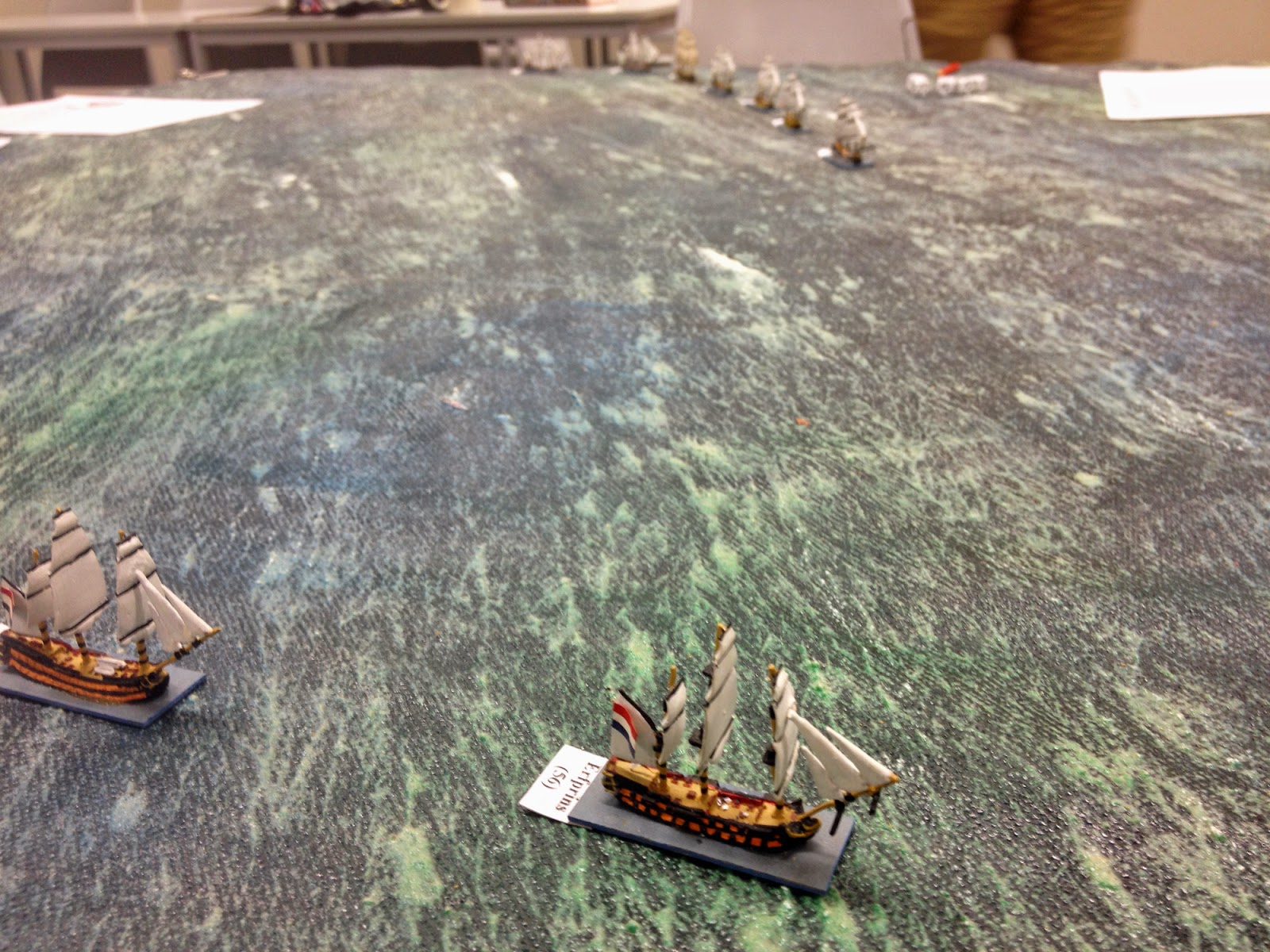 The British approached in line astern, but switched to line abreast in order to bear down more rapidly on the Dutch and to cut their line in several places. This was where the Princess Amelia caused issues; it was an old-school 80-gun three-decker and as well as being under-gunned for its size it didn't turn as well as the rest of the British ships. 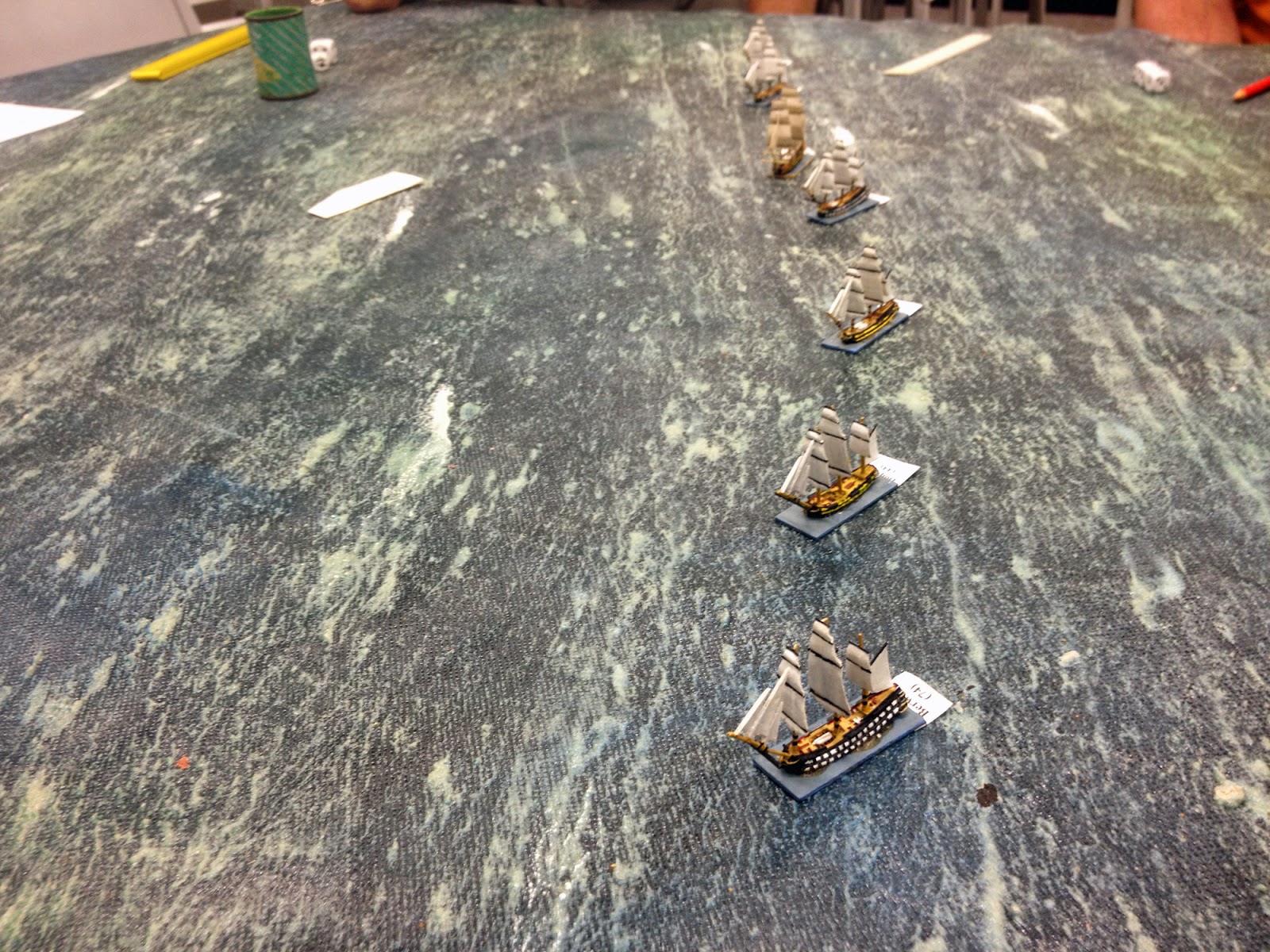 Erfprins opens fire at long range, but scores no damage. 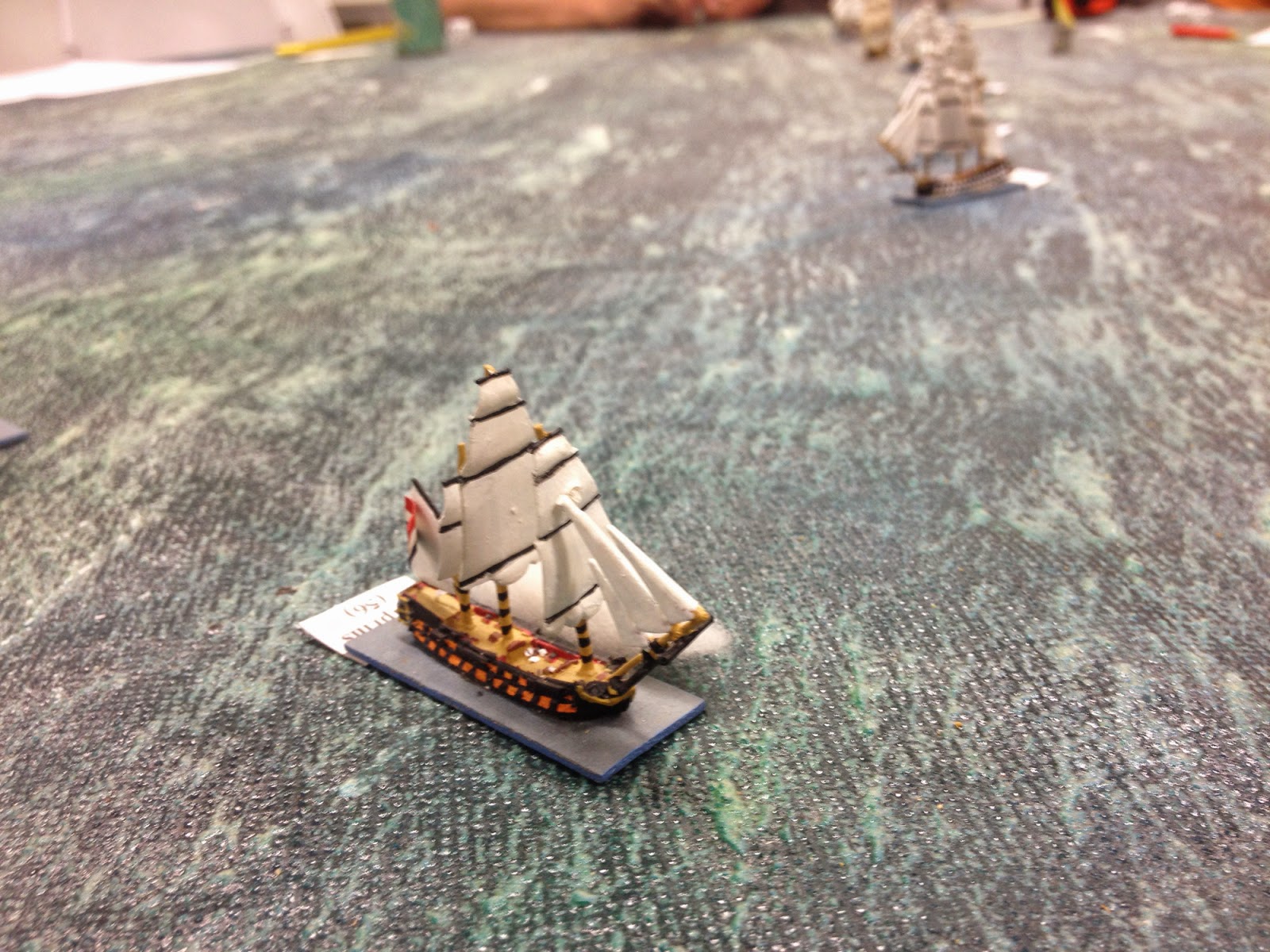 The British cut the Dutch line, Berwick in the lead. 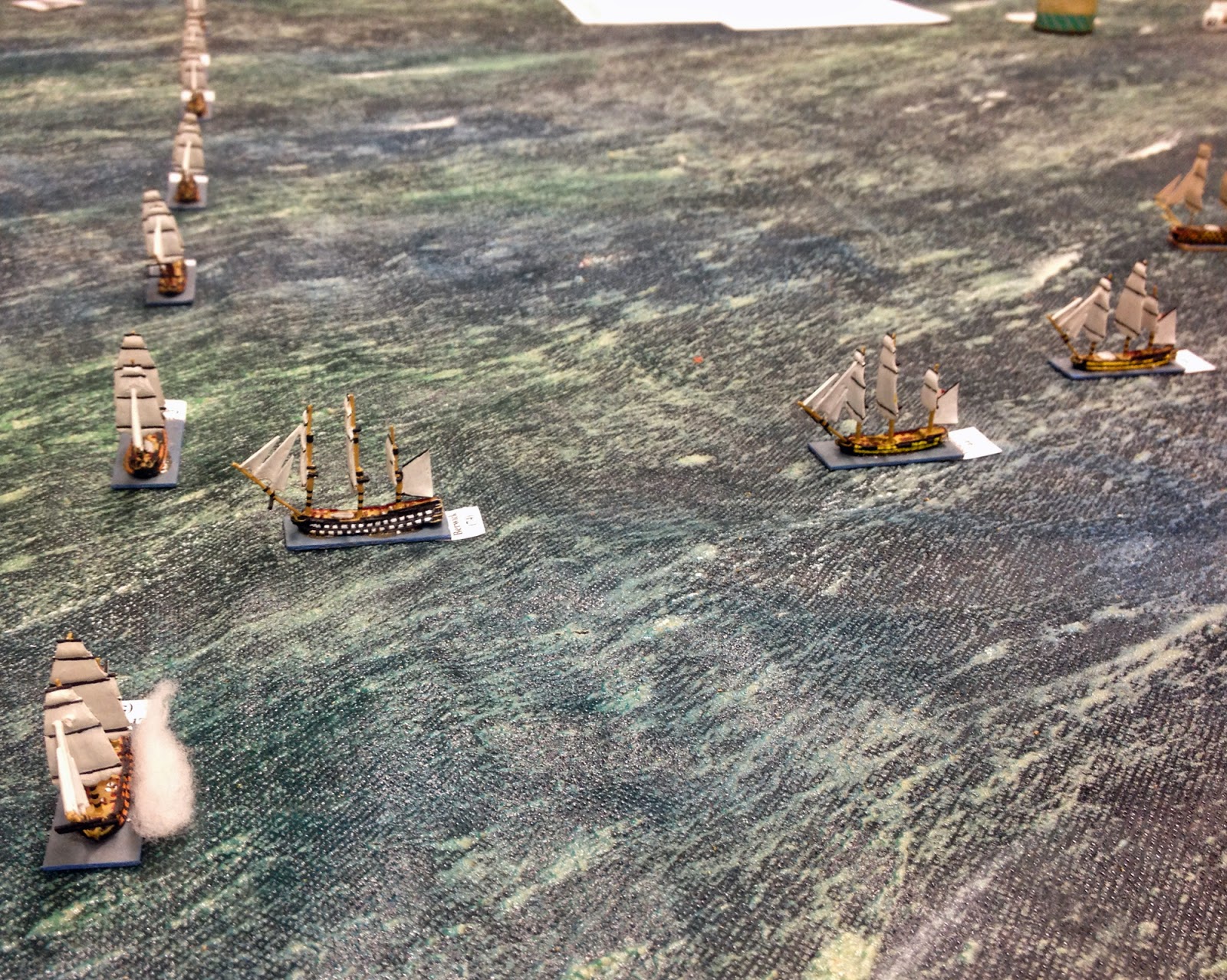 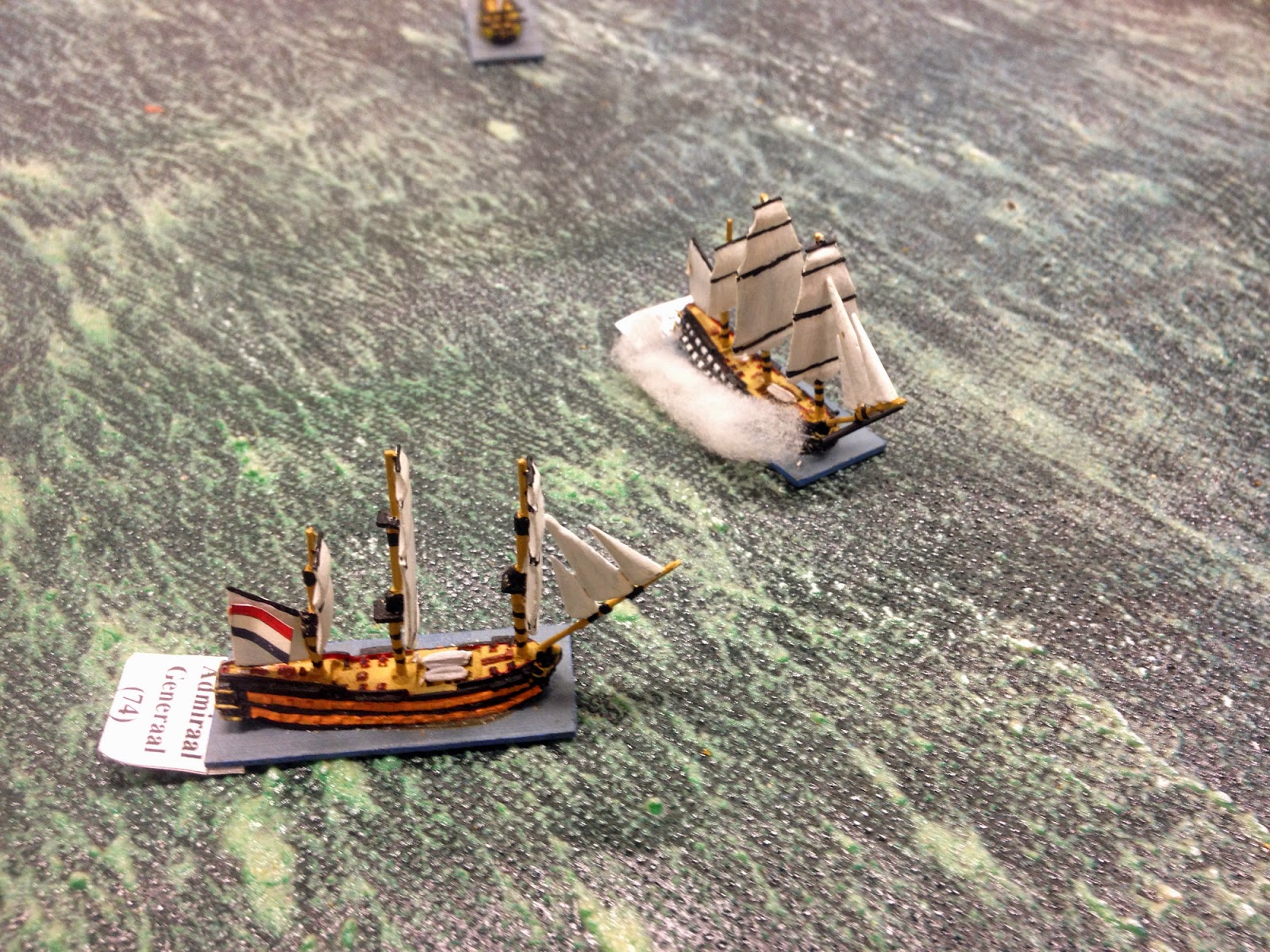 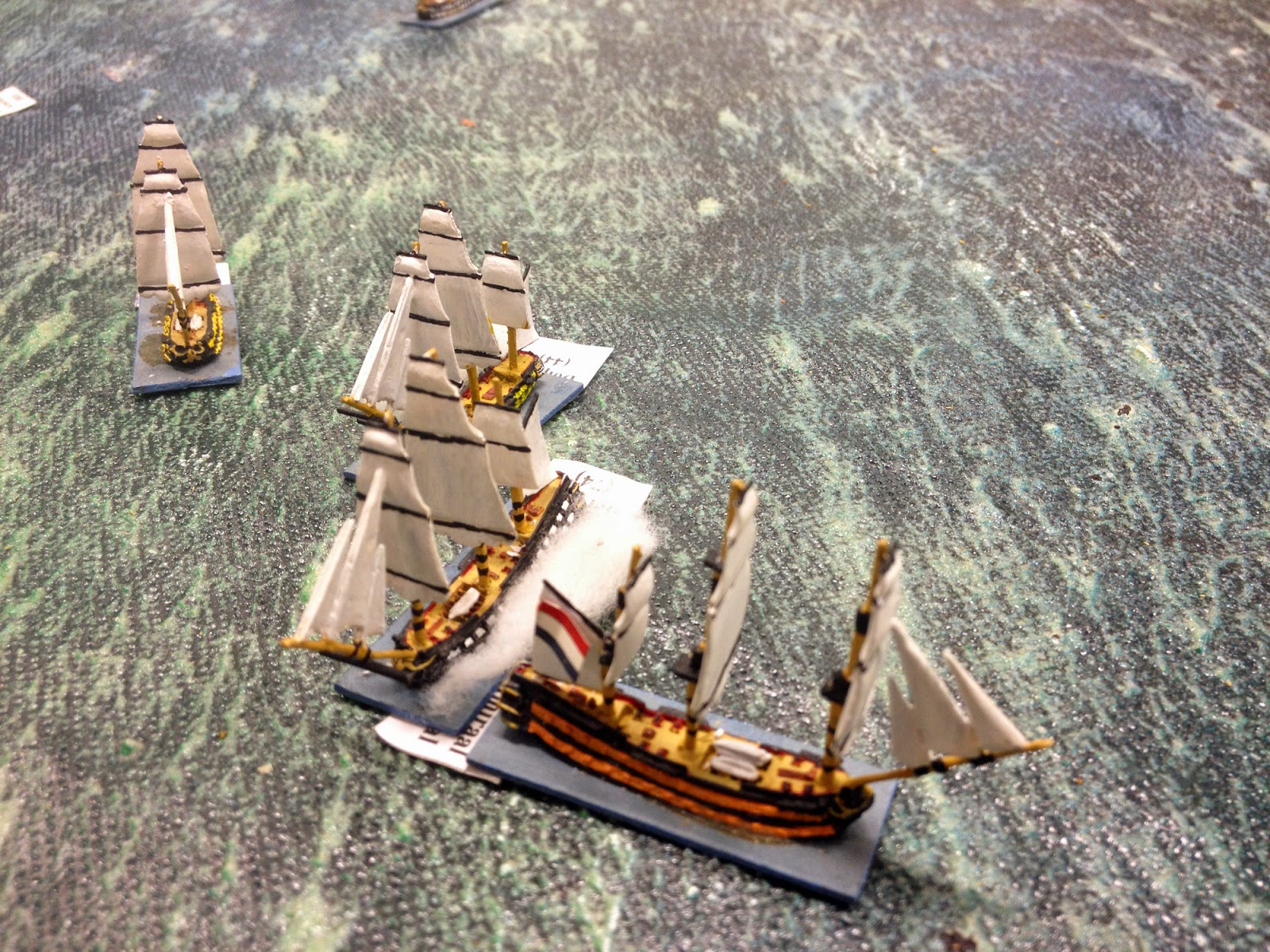 A fierce fight broke out at the head of the Dutch line, which saw the Argo strike and the Berwick heavily smashed about. About half of the ships were sucked into this area. 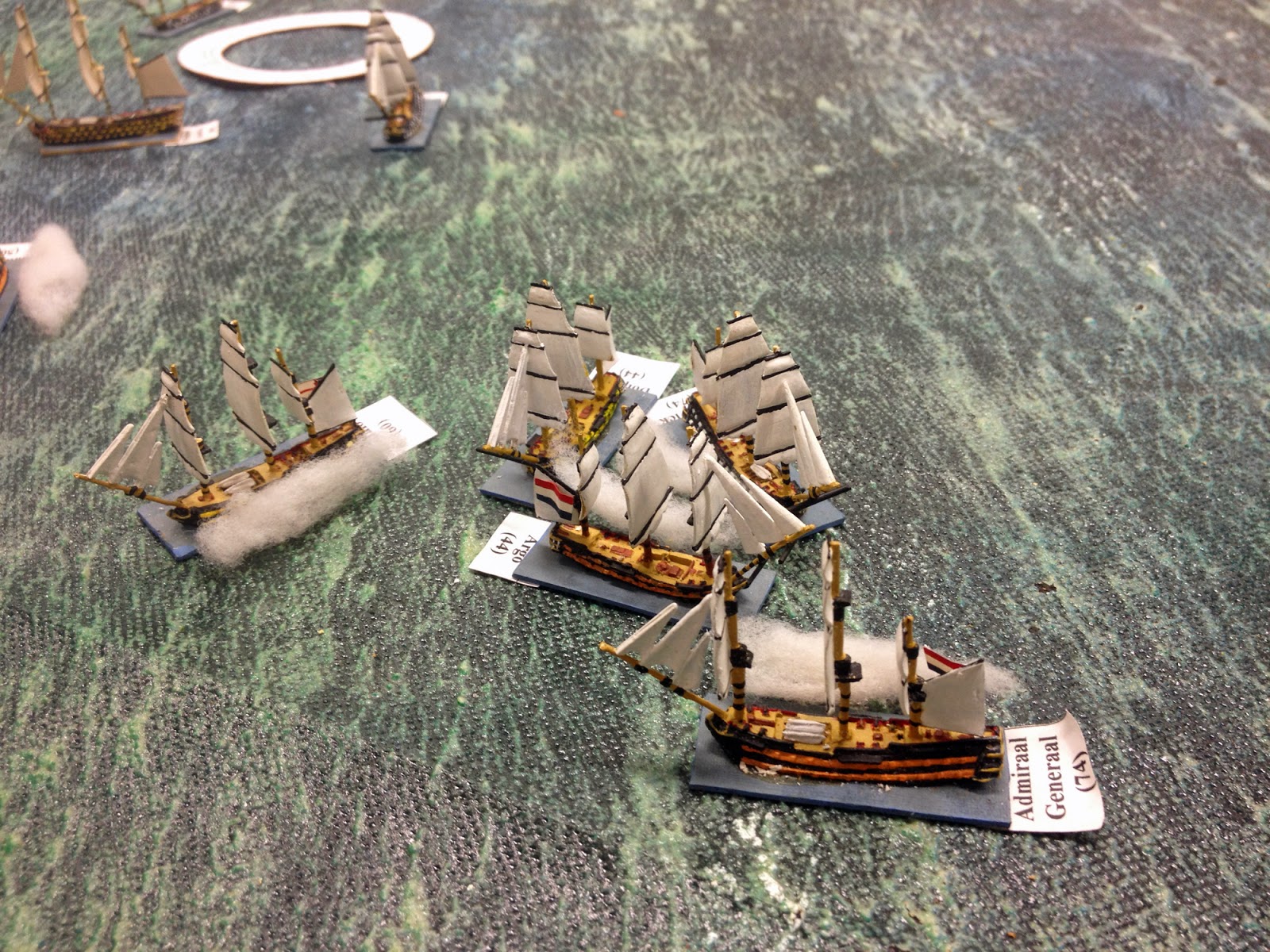 The Princess Amelia was engaged by both the Admiraal de Ruijter and the Admiraal Piet Hein. A broadside from the former ship holed her below the waterline at one stage. 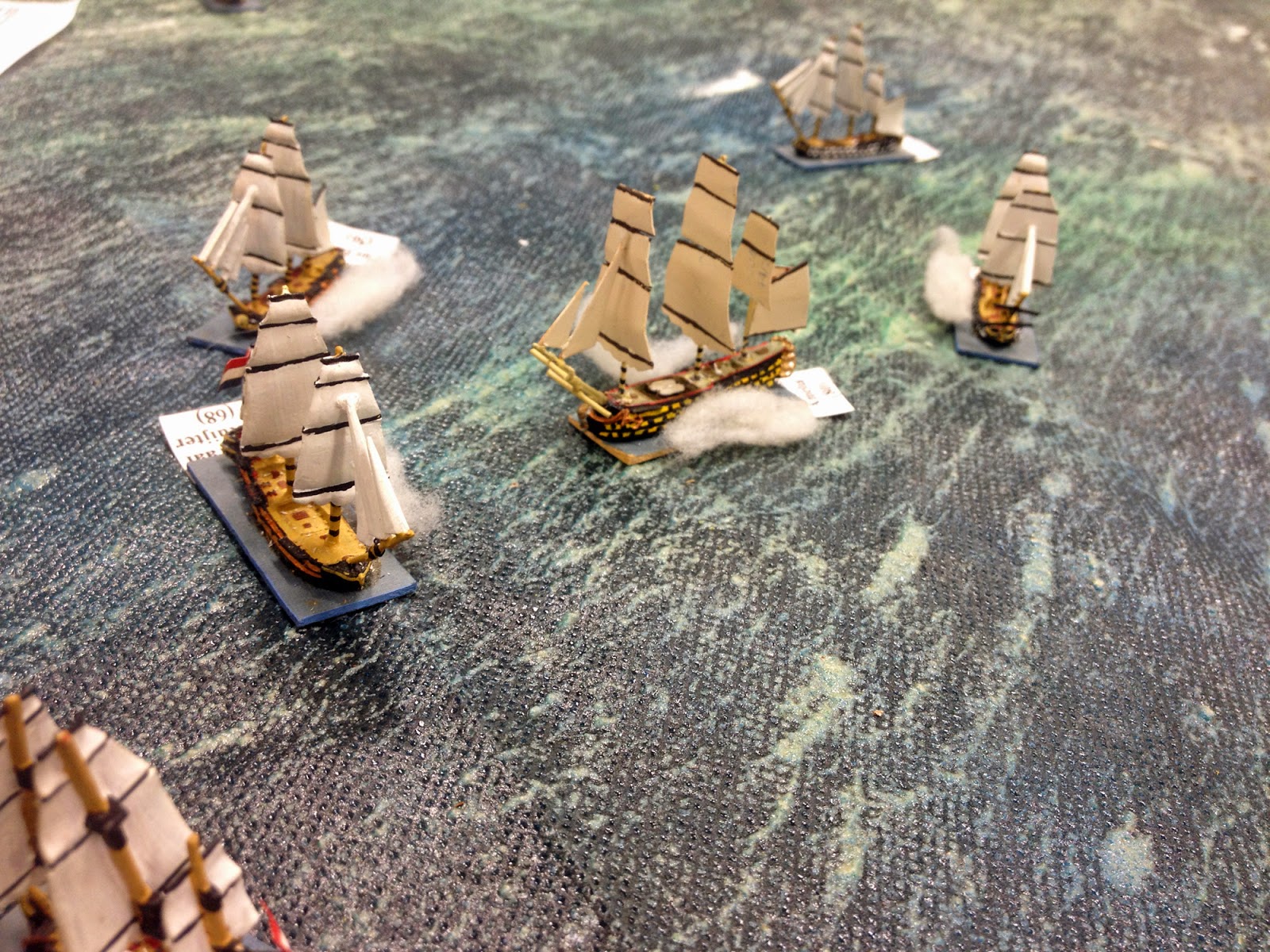 As time ran out, Bryan decided to get in close, and the crew of the Princess Amelia attempted to board the Admiraal Piet Hein. In a fierce melee, however, it was the Dutch who were victorious, forcing the British ship to strike. 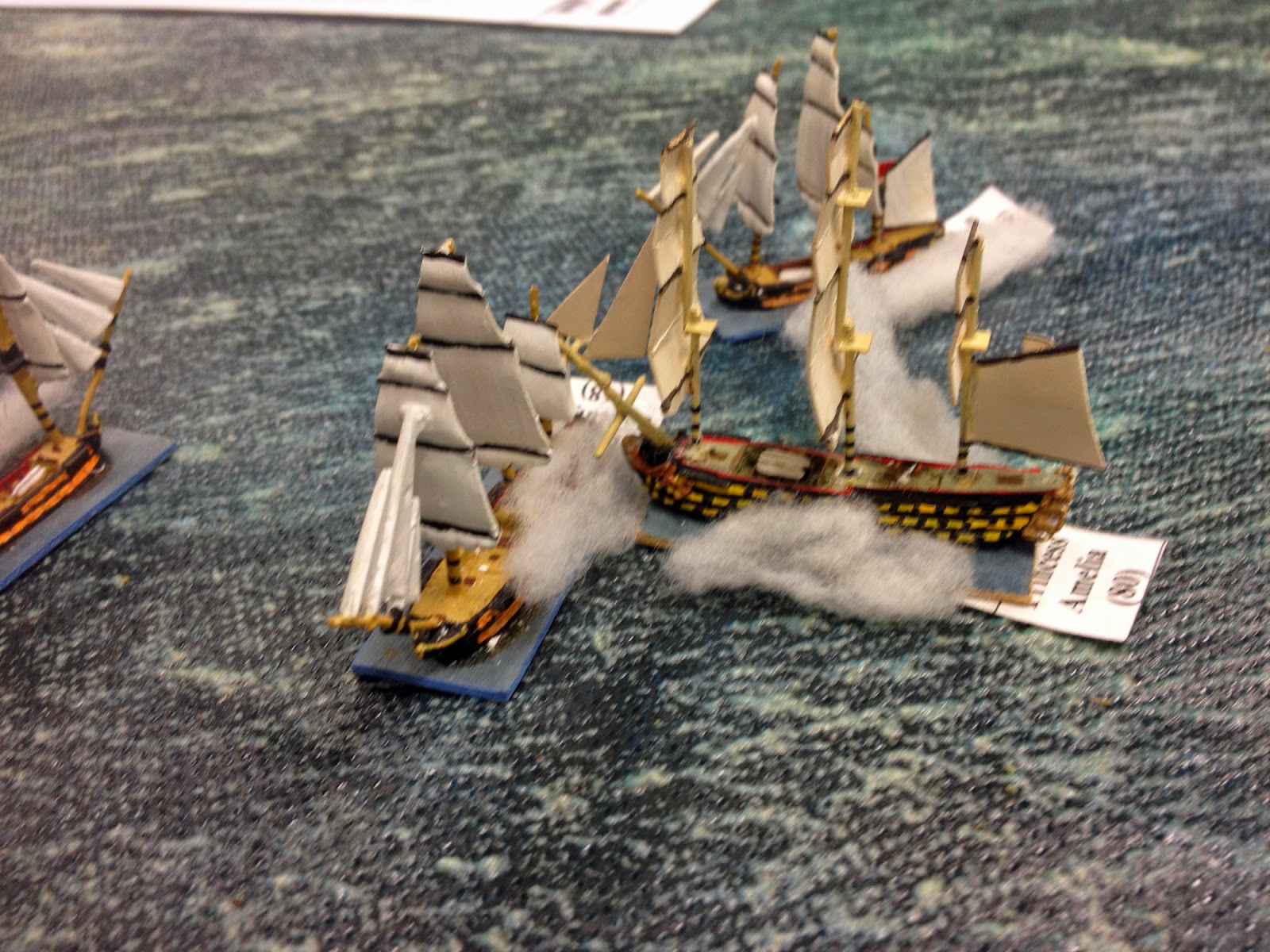 At that point we prety much had to end the game. Most of the ships were engaged by the end of the evening, and some had taken reasonable amounts of damage. The Berwick was in a bad way, whilst the Princess Amelia had been captured. The Dutch had lost the Argo, but as their smallest ship she was no real loss. On the whole things were looking good for the Dutch.

After initial reservations about FLOB's odd turn sequence and random movement, people seemed to enjoy the game and pick up the mechanisms fairly quickly

Meanwhile, on the other table, we had moved forward 500 years to see ships battling in space - Geoff and Peter were playing Full Thrust: 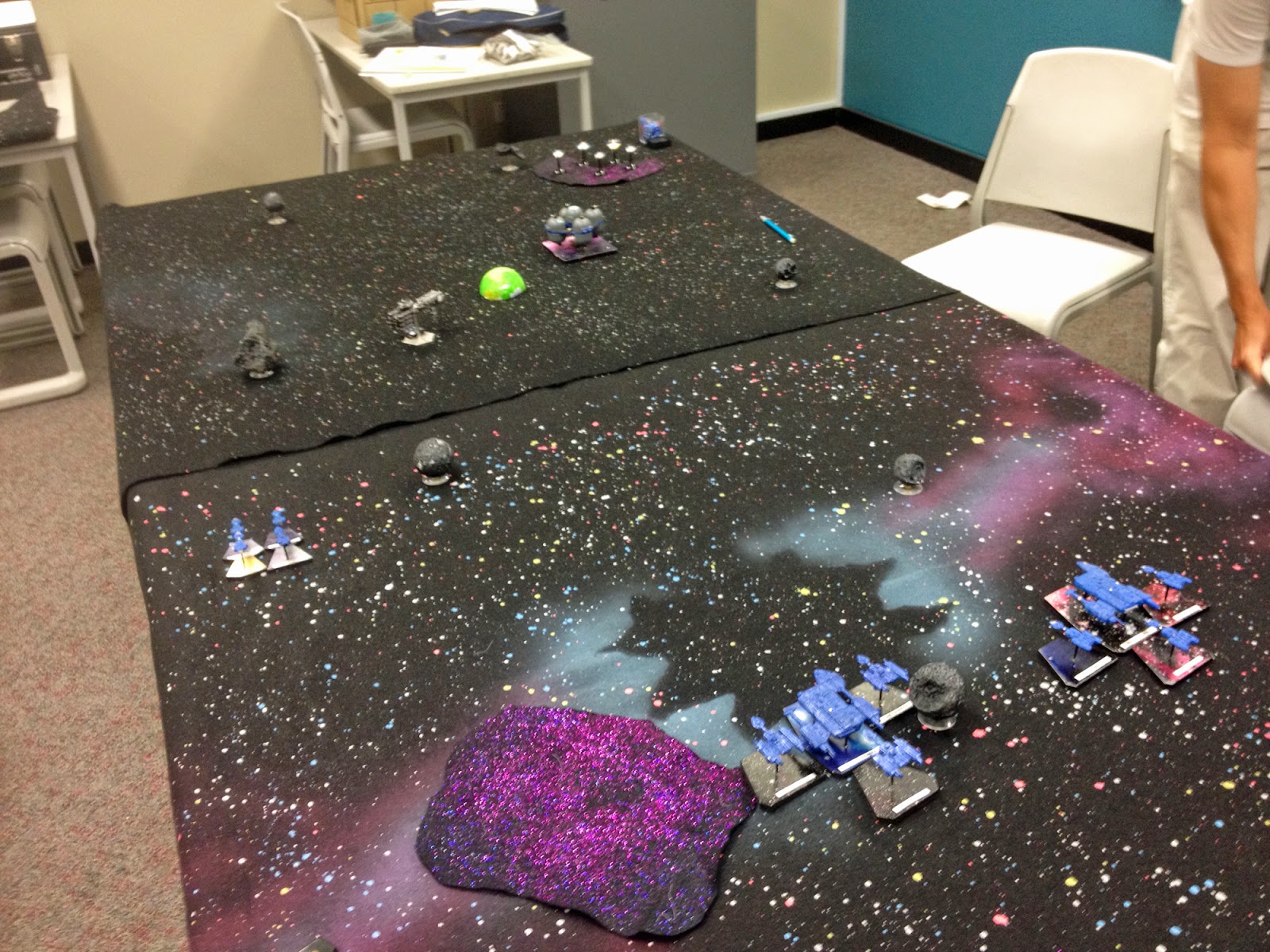 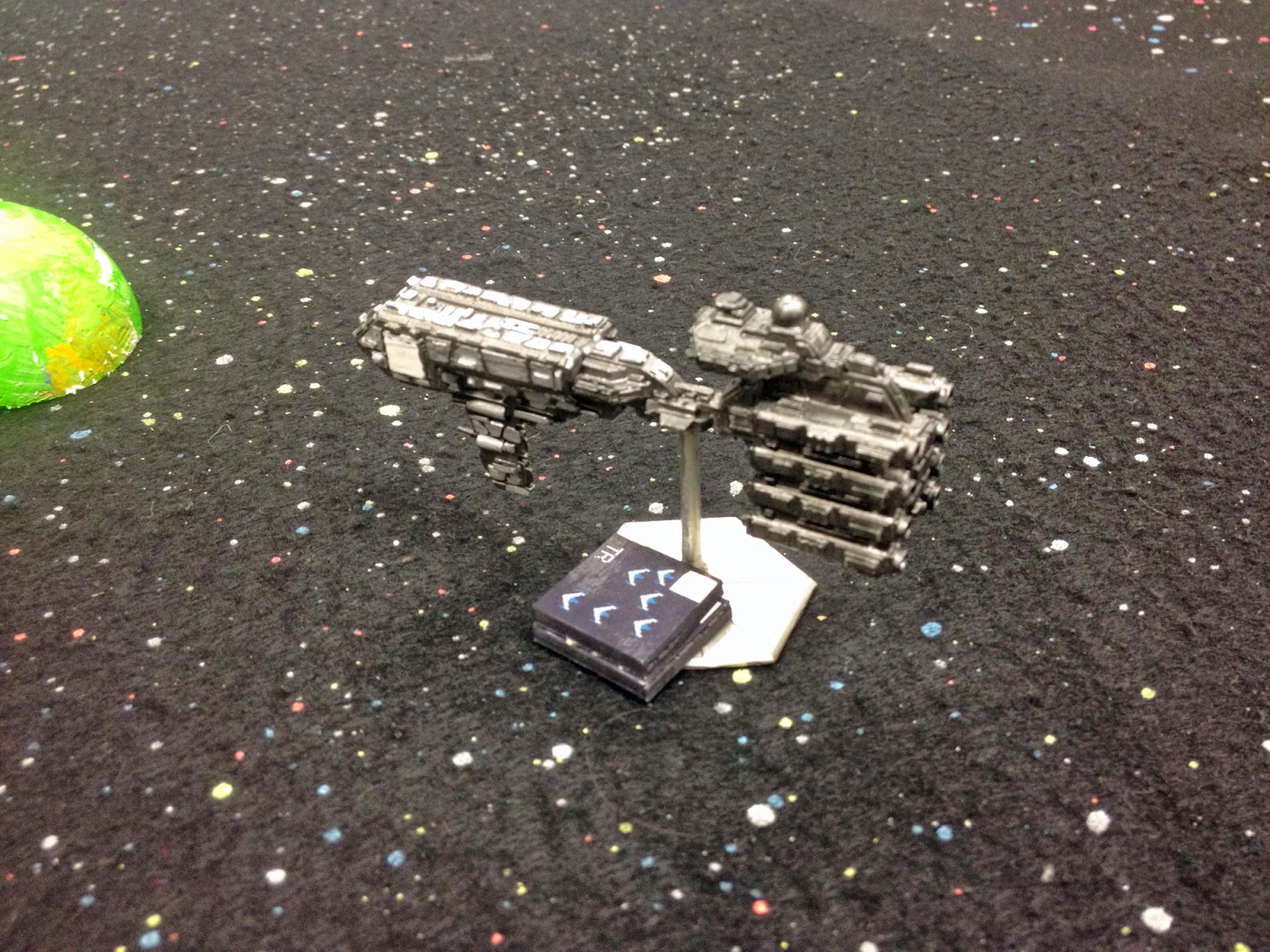