Void And Stars - The Rematch

With fewer jobs to do on Sunday than I anticipated, and an early start in order that Mrs Kobold could visit the local market, I found myself with time to devote to Void and Stars. I decided to rejig the starship designs I used in the previous game, adjusting them to make them faster with better ranges and CV on the hope it would produce a more decisive game.

The new stats follow. I have listed two costs, System Cost and Actual Cost. The first is the cost of the CV plus specials, whilst the second takes into account the multiplier for Quality. I have decided to base the break-point for capital ship/escort on the System Cost, with anything over 40 being a capital ship. Thus a high-quality escort might cost more than 150pts (there's a phrase I never thought I'd write), whilst a low-quality capital ship may be less then 150pts.

Essentially I raised all CV values, and increased weapon ranges on some ships to allow for decisive fire at longer distances. The OUDF ships are still tough, but the LLAR have better factors for dealing with it. Higher speeds mean more chance for rear shots.

You'll be pleased to know that I didn't record it in the same detail as the last one. It lasted longer because both sides had rotten luck in terms of activation, failing the easiest of rolls. It ended in a decisive result though.

Because of the changed points values the two sides were uneven in terms of numbers, with the LLAR having six ships and the OUDF only five.

The LLAR force was, once again, the cruiser Montevideo, the gun-frigates Pizarro and Orellana and the missile frigates Estrella, Tiburon and Raya. A total of 756pts.

The OUDF had the cruise Mittagong, the escort carrier Flinders and the frigates Opal, Sapphire and Diamond. A total of 772pts.

Once again the LLAR plan was to pump missiles at the Mittagong, whilst sending the gun-frigates after the OUDF frigates. The OUDF covered the Mittagong with the Flinders, and sent the frigates on a flanking move.

The LLAR move first in each turn.

The LLAR launched missiles at the Mittagong and fired at the Flinders until the Montevideo failed to activate.

On the OUDF turn the Flinders launched fighters on a CAP mission to cover the Mittagong, before the Mittagong failed its activation and ended the turn.

The Montevideo launched missiles, then the Estrella ended the turn.

The OUDF  frigates moved past the nebula, firing ineffectively at the Orellana as they did so. One of them caused a turnover.

The LLAR launched more missiles until the Montevideo ended the activation. the gun-frigates had not yet acted.

The Mittagong fired at the Estrella causing a weapon damage, whilst the Flinders used escort support to eliminate a missile marker. The Diamond caused a turnover.

In the turnover phase missiles hit the Mittagong, but its armour handled the damage.

This was pretty much the position at this stage: 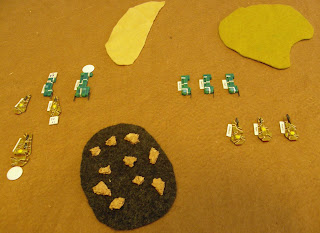 In a change of plan the Montevideo and its supports closed up rapidly on the Flinders and hit it with direct fire and missiles, causing both systems and weapon damage. Once again the other ships failed to activate.

The Mittagong shrugged off more missiles.

In the OUDF turn the Flinders came good, repairing all damage, then launching a new CAP patrol to protect the Mittagong. The Mittagong returned the favour by failing to activate and ending the turn, but not before it had damaged the Estrella.

The LLAR switched attention to the gun-frigates, and the Pizarro inflicted a system damage on the Opal. Then the Orellena failed its roll.

The OUDF had it worse. Their first ship failed to activate on two dice and caused a turnover.

The LLAR failed to activate their first ship, and the two forces passed  each other with barely a shot exchanged.

The OUDF exploited this, with the frigates swinging around into the rear of the LLAR gun frigates, destroying the Pizarro's weapons. On the other side of the table the Flinders and the Mittagong took down the Montevideo's screens.

Things were hotting up now. The LLAR gun frigates also came about and the Pizarro blasted the rear of the Flinders, damaging its weapons. The Montevideo added to this, adding a weapons destroyed to the tally. Were it not for the armour the Flinders would have been destroyed.

The Mittagong now engaged the Pizarro with full spectrum sensor enhanced  overload shot, causing a weapons critical. The Diamond caused a systems destroyed on the Pizarro, but caused a turnover.

The LLAR got a good set of activations this turn. The Orellana and Raya engaged the Sapphire, but inflicted no damage, whilst the Tiburon and Estrella damaged the Diamond's weapons with a volley of direct fire and missiles. Finally, aided by the fleet command centre on the Montevideo, the damaged Pizarro managed a series of rear-shots on the Flinders which destroyed it. First blood to the LLAR.

This was now the situation: 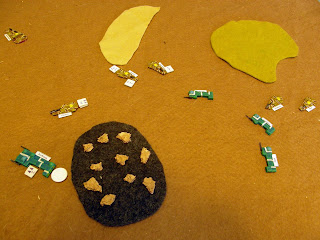 The OUDF lost no time in taking revenge. Fire from the Mittagong and the Diamond stacked up hits on the Pizarro, caused a crew panic and the Pizarro engaged its warp drive and fled. the Sapphire then failed to activate an the turn ended.

The LLAR frigates engaged the Diamond and Opal with direct fire and missiles to no effect, before the Montevideo ended the activation.

The OUDF had a better turn. The Sapphire moved in behind the Orellana and destroyed it, and the Opal damage the Raya before the turn ended.

In danger of going off the table the Montevideo slowly turned back into the fight. The Estrella and Tiburon used missiles and direct fire to plaster the Diamond, leaving it with a systems destroyed and weapons damaged.

In the OUDF turn they managed a systems destroyed on the Tiburon, before the Opal once again failed to activate.

The Estrella and Raya continued to persecute the Diamond, putting it in weapons destroyed with a crew panic as well. It passed its morale, but was in a bad way.

In the OUDF turn the Opal failed the fleet again, but not before inflicting weapon damage on the Raya.

The Estrella finished off the Diamond. But that was it for the turn.

Once again the Opal threw away the OUDF turn.

The Raya showed that it could emulate the Opal, and threw away the LLAR turn.

The OUDF engaged the Montevideo with the Mittagong and the Sapphire, using overload fire and full spectrum sensors, and left it with its weapons damaged and systems destroyed. It hadn't had chance to raise its shields since they were taken down on Turn 6. Meanwhile the Opal destroyed the Raya's weapons. Things were starting to look bad for the LLAR.

The Raya and Estrella launched missiles at the Sapphire, causing weapons damage. And that was it.

In the OUDF turn the Mittagong caused a turnover, but still managed to add a systems destroyed to the Montevideo's woes. 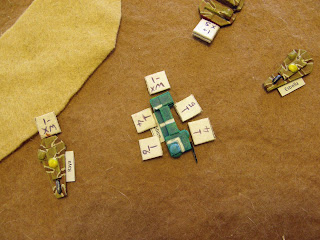 The LLAR launched everything it had at the Sapphire, overloading it with direct fire and missiles. It didn't stand a chance and vanished in a massive explosion. The OUDF had now lost over half of their ships, but the morale test only caused a systems damage on the Mittagong.

The Opal and Mittagong concentrated their fire on the Montevideo; the Opal's shot caused a weapon critical, giving the Mittagong the opening it needed to destroy the enemy capital ship.

The LLAR morale tests went less well than those for the OUDF - the Estrella and Tiburon fled, leaving the Raya alone on the field. At that point I ended the game.

The losses were as follows:

The LLAR lost the Montevideo and Orellana destroyed and the Estrella, Tiburon and Pizarro fled.

The OUDF lost three ships destroyed; the Diamond, Sapphire and Flinders. Despite this the victory was really theirs as the Raya was in no state to take on both the Opal and Mittagong alone.

This was a much more decisive game than the last, with the changed ship designs making a lot of difference, as well as being easier to run. Faster speeds meant that rear shots were easier to get, and they seem to be the key to destroying an enemy; getting behind a ship and unloading every weapon you have is very effective. The problem is not leaving yourself vulnerable to return fire.

The rapid turnovers were frustrating, and it looks like a force needs either a good innate Quality, or such things as the fleet command centre to avoid being inactive. Since ships that don't act still move in a straight line, there is a danger that with a run of bad luck your fast ships will fly off the table and count as lost. I reckon a force needs to have, or simulate, a Quality of 3 or better to stand a reasonable chance, although a fight between two low-quality forces might be interesting. Or amusing.

The hardened armour still proved useful, but was not as frustratingly useful as it was in the last game. The OUDF's direct fire linked with full spectrum sensors is a great weapon, but I also have a soft spot for the LLAR's spinal mount gun-frigates. When it activated the Montevideo's assault doctrine was effective too; this could be nasty if combined with a spinal mount, although I don't know if a capital ship can have two doctrines. The current version of the rules doesn't forbid it ...

The game generated no major questions. I tried the the alternative escort support rule (your CV + die roll against full strength of missiles/fighter) but not enough to form an opinion as to whether it's better than the 'published' version.

Overall, a much more satisfying game in terms of result and ease of play.

Edit: I realise after reading the rules again that in both games I made a mistake with direct fire in that I gave the firing ship a +1 for overload, rather than it putting the target on a -1. Obviously this makes a difference in how decisive damage is. OUDF ships are better off skipping overload if they can use their full spectrum sensors, though, as the sensors give both a +1 to the firer and a -1 to the target; a nasty combination.
Posted by Kaptain Kobold at 03:30