Void And Stars - The Ships

In my previous post about Void And Stars I went through the process by which I created the game stats for the two forces I want to use for my first playtest game. One of the reasons I chose those particular forces is that I have a small selection of ships for them, which I scratchbuilt over ten years ago from balsa, card and, of all things, lentils. There are pictures of two of them accompanying the post.

Unfortunately in terms of playtesting the game at home, I have a small problem. Void And Stars recommends a playing area of 4' x 4', and sets the distanes for Short, Medium and Long accordingly. It is also designed for use with 'standard' spaceship models; those the same size of my scratchbuilds in fact. However the playing area I have at home isn't very large, at least in terms of providing a square table. I could do 6' x 2 1/2' easily, but I wanted to try the game on the recommended table size.

So I decided to shrink the game and play it on a 2' x 2' area (a standard 'Hordes of the Things' board for 15mm figures on a 40mm frontage. Since all distances in Void and Stars are based around the S/M/L mechanism it was easy enough to use a half-sized measuring stick.

The problem comes with the miniatures, though. Basically the ships I have are of a size where, given the smaller playing area, if they get close together they'll overlap and get in each others' way. I personally think that you shouldn't use models that are longer than the shortest range band in the game; it doesn't look right, aside from the actual play issues of models overlapping. If I was going to use a smaller area,  I'd need to use smaller miniatures. Which I didn't have.

So I decided to scratchbuild some. Quickly. Late on a Thursday afternoon I sketched out some designs. By the end of the evening they were cut out, assembled and ready to be painted.

They are designed to be a halfway house between counters and figures - 3D counters, essentially - and are less complex in design than the larger ones I made all that time ago. They are, however, built on similar principles, consisting of a card template with layers of thick and thin card building up the superstructure, and lentils and rice providing some of the detail. All card pieces are cut to a set of rules and standard sizes, so that repeating the builds, or making similar ships, is not an impossible task further down the line.

Here they are assembled and undercoated (click on any picture to see it bigger, of course): 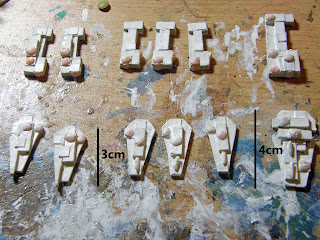 You can see the two different types of escorts, and the capital ships on the right. The top row are the OUDF vessels, whilst the bottom are those of the LLAR.

The escorts sre 3cm long, whilst the capital ships are 4cm.

Here's the next stage - a base-coat of colour and some dry-brushing: 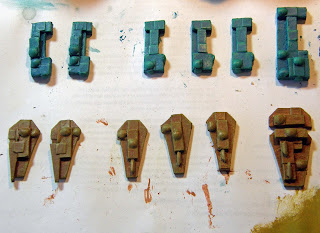 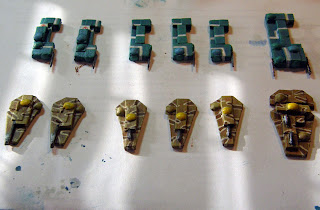 To be honest I'm not thrilled with the colour-scheme of the OUDF ships, but it will do for now.

Anyway, they went from a concept sketch on a piece of paper to finished, painted pieces in just over 24 hours. Not bad, really.

Time for some names.

I know the OUDF covers more than just Australia, but it's a good place to start. So their force will be:


The LLAR is harder, as my Spanish is non-existent. Let's see.

And now I'm ready to actually play the game ...

As an aside, are there any manufacturers who make small spaceships? Most models I see seem to be done to a kind of 'GZG Standard'. What I want is a range of models where even the biggest capital ships are no more than, say, 2 1/2 inches long. I know I could 'rebadge' small ship models from larger ranges, but it doesn't look the same - a meaty battleship looks like a meaty battleship at any scale.