Gaslands On The Cheap

We experimented with a smaller-scale Gaslands game again last night - each player running one vehicle built to a mere 20 Cans with no sponsors. They were allowed to select perks, but a vehicle could only select them from a single class.

We thought that a really restricted design like this would concentrate the game on its core machanics, rather than complex interactions of perks, weapons and sponsor abilities.

The scenario was randomly determined. we atually made a few minor adjustments to scenarios in advance of the oll:

(i) If Arena of Death was rolled, then the player would get two vehicles, since respawning's not allowed in that senario.

(ii) Saturday Night Live would be played as normal, but there are fewer opportunities to get VPs because without sponsors there's fewer ways to get Audience Votes. So the special prizes randomly generated throughout the scenario are worth 2 Audience Votes each.

Anyway, we rolled a Death Race. We always do.

There were four of us playing. From left to right on the starting grid:

Me - A car with a ram and the Delicate Touch perk.

Damien - A performace car with tracks and a box of grenades.

Dom - A car with a grabber-arm and the Loader perk. 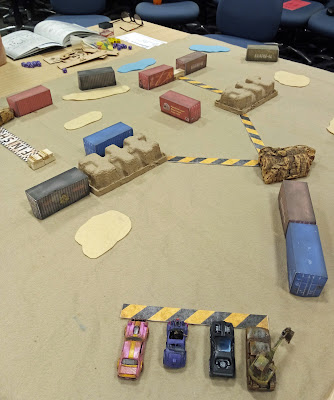 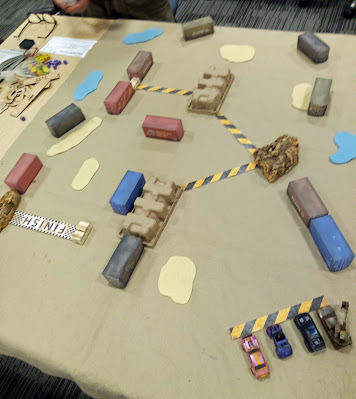 And away we went. We all reached Gate One safely, since there was plenty of room and no-one chose to ram or do any other funny business. 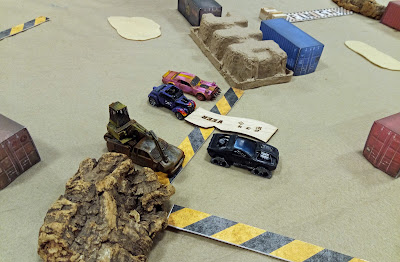 Of course at Gate One the shooting starts. Caesar somehow accumulate a pile of hazards and wiped out, whilst Dom atttacked Damien's car with the grabber-arm chucking him into a rock.

Dom and Damien went for the tricky narrow gap on one side of the container, whilst I went the long way around but failed to keep up a steady acceleration. 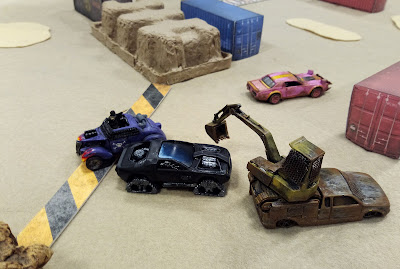 The run for Gate Two. Damien was recovering from being chucked into a rock on the left, Caesar was still trying to restart his engine, and I was just not going fast enough. meanwhile Dom was driving his vehicle with great skill, and a temendous amount of luck, and pulling of a series of spins and slides to take him just where he needed to be. 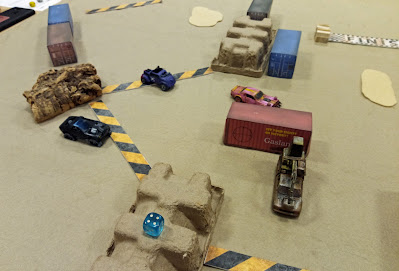 Caesar and I ended up in all kinds of trouble as we collided with each other. 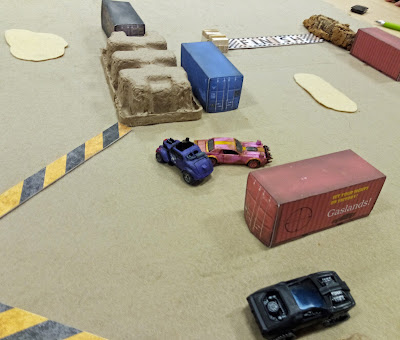 The race was going to be between Dom and Damien, with Dom now well out in front. However his hazards were mounting ... 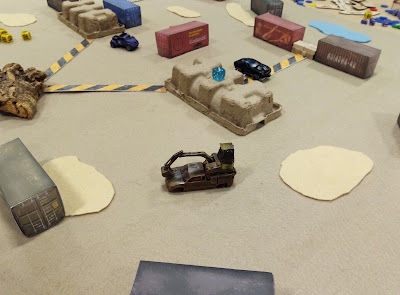 ... and his luck with steering couldn't last. He clipped a container and wiped out. 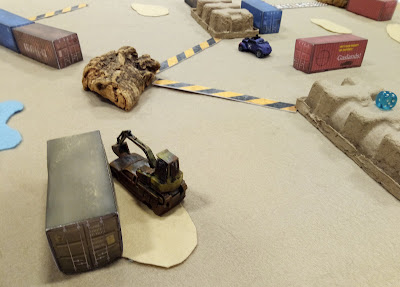 Damien raced to catch up, his tracks enabling him to run safely through the soft sand that had hindered Dom. 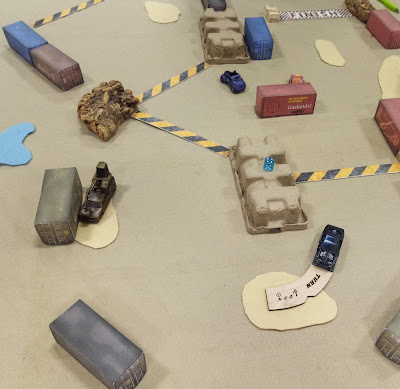 Dom got his car up and running again, and passed Gate Three. His clear run to the finish was blocked by Caesar and I still blundering around after our post-Gate One mistakes. 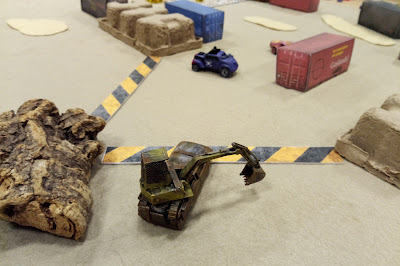 I took the bold step of simply smashing through a container - colliding with it in one activation at low speed, using the ram to avoid the hazards and the low speed to minimise damage. In Gaslands if you start a move in contact with an obstacle, you ignore it during movement. Like this: 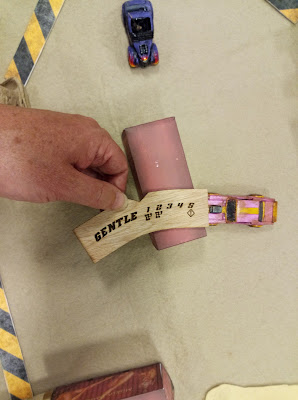 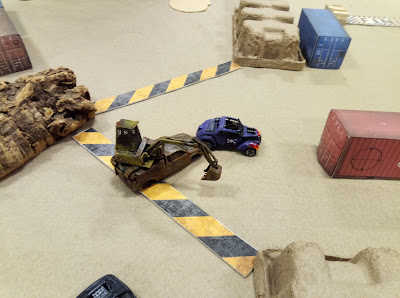 Here's my car (called 'Woman King') looking like a vehicle that's back in the race. 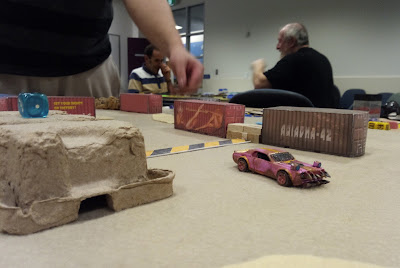 Dom and Caesar had both wiped out, leaving Damien a clear run at the fnish. Careful positining after a spin meant that he could do it without rolling shift dice, so at the speed he was travelling at his win was a certainty. 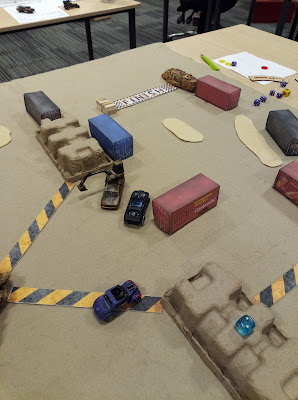 Caesar got back into the running, and brought his HMGs to bear as I raced ahead of him, badly damaging my car. 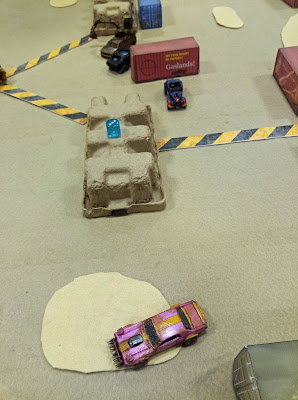 Damien sped towards the finish ... 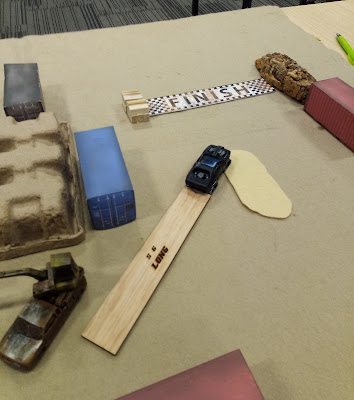 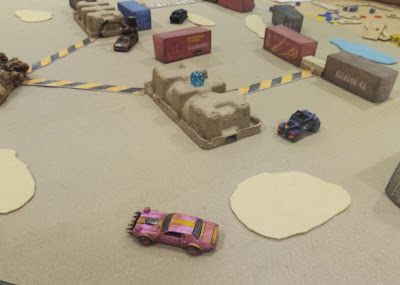 A win for Damien! 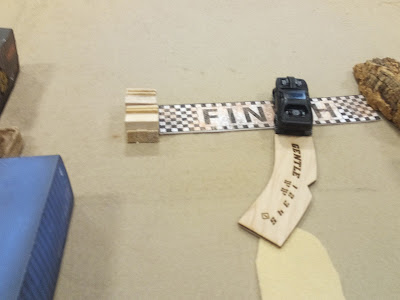 And a crash for me, as my bullet-riddled car could take no more. 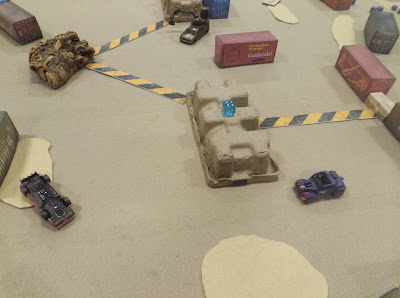 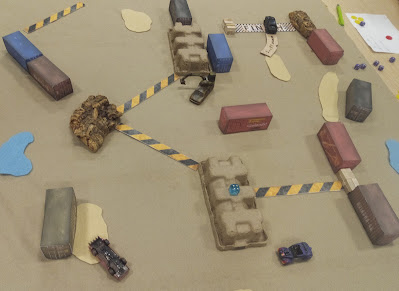 We felt the seriously cut-down car designs worked well. There was less scope for clever mini-maxxing of vehicle/team designs, and, as I said in the introduction, it focused the game on the basic machanics instead of clever tricks. It's a style of play we'll try again, hopefully in some different scenarios.