For our Thursday evening game this week Catherine and I replayed my Ripple Field Portable Wargame scenario. She took the Parliamentarians, whilst I had the Royalist attackers.

Once again I led with the horse, swinging them out on my left where Catherine had deployed her horse. She held the hill with dragoons and shot, ignoring the useful enclosures that flanked it. Waller positioned himself with the artillery. 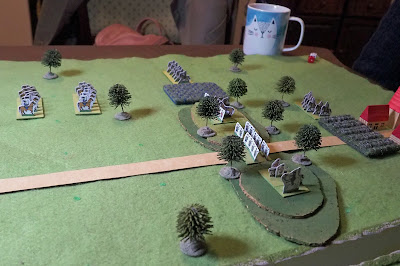 I charged, and inflicted a hit on the Parliamentarian horse. It fell back. 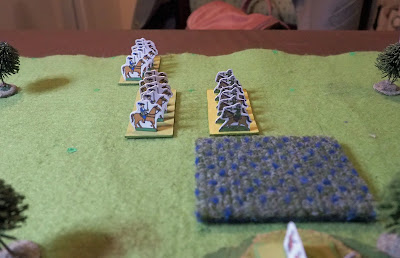 Meanwhile my shot advanced, and took up positions at the foot of the hill. Catherine looked concerned. 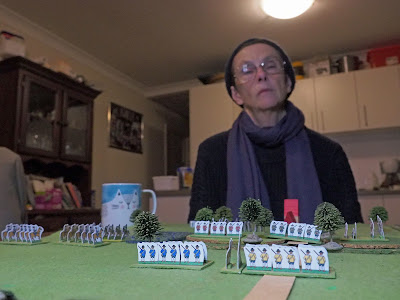 More horse came in and charged Waller and his guns, but were repulsed. Milling in confusion at the foot of the hill, they were an easy target for the artillery, and took other hits from shooting, eventually falling back. 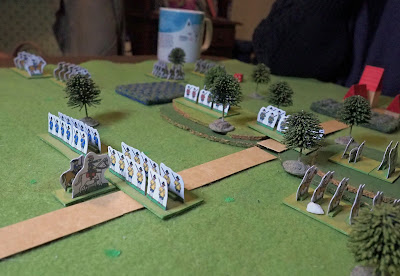 The Royalist shot poured fire into Parliament's men, but Waller's troops held firm. In the distance you can see Haselrig's horse coming out of reserve to support the other Parliamentarian unit. 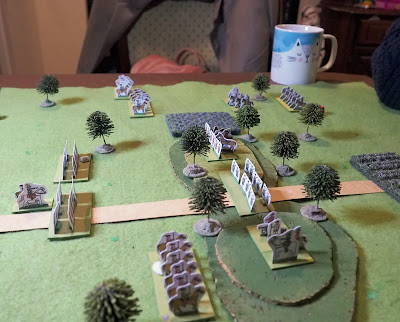 With Haselrig holding back, I switched some of my horse to the centre, where it charged the dragoons on the hill. Being dragoons they fell back. 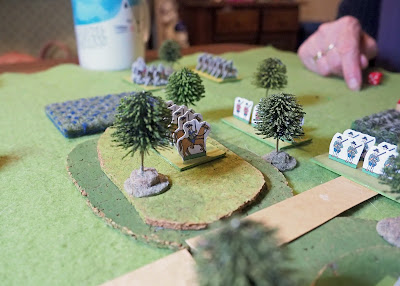 Reinforcements from Tewksbury arrived and took up positions in the village of Ripple. 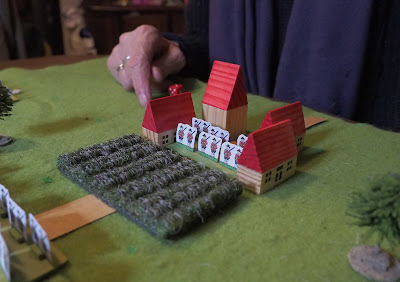 On the Royalist right I failed to take the enemy guns. Despite good initiative rolls, my combat rolls were appalling. And I was taking numerous hits on my units. Meanwhile the defenders on the hill hadn't taken a single hit. 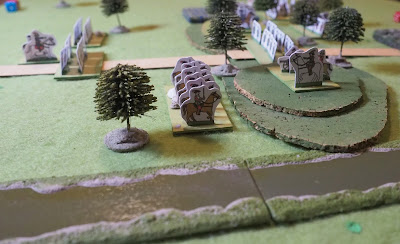 I got desperate and charged Haselrig's horse on my left. He fell back and took a hit, but my pursuit now left my flank exposed to the other horse. In the ensuing melee I inflicted another hit on Haselrig, but eventually my horse were routed. 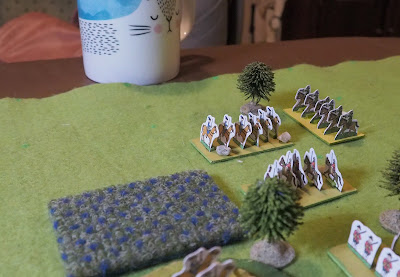 My shot continued to make little impression on the Parliamentarian position. 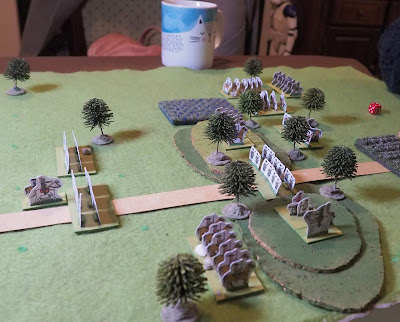 Prince Maurice ordered a charge, hoping to drive the enemy off the ridge, but they still held. The Royalists fell back. 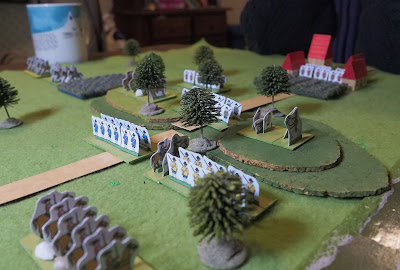 But the dragoons had fallen further back, and the flank of Waller's shot was exposed. I had a spare unit of horse, and rushed it into the gap. In the distance you can see the dragoons falling back beyond Ripple. 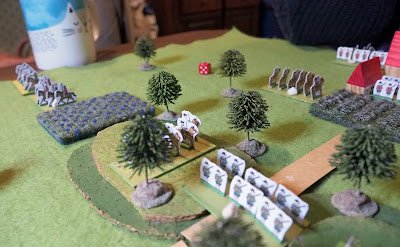 With the dragoons now away from the action, I brought back the horse that was pursuing them, and it hit the rear of Waller's shot. Royalist shot poured fire in them from the front. Slowly their will to fight was eroded. But very slowly. 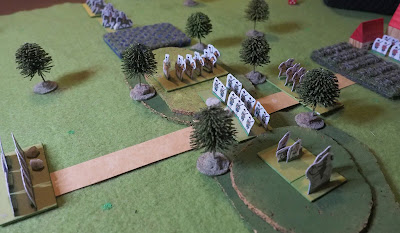 The Royalists had now taken so many hits that they had to test morale to see if they would continue fighting. They did. A third unit of horse was brought up against the shot on the hill, and that was enough to break them. In addition the horse pursued into the flank of the now unsupported artillery, which was also overrun. Waller was captured. 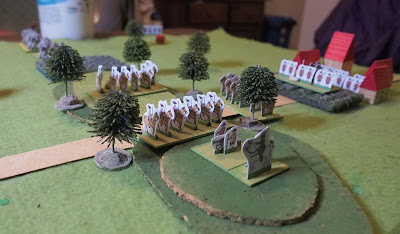 And that was enough to break Parliament's morale as well. Despite holding Ripple Catherine failed her morale test, and the army quit the field. 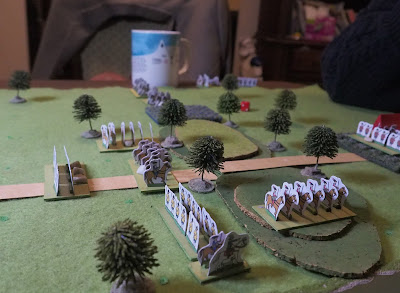 In fact Catherine held a strong position around the village, with the relatively fresh dragoons (now returned) and the Tewksbury Foot both in cover. 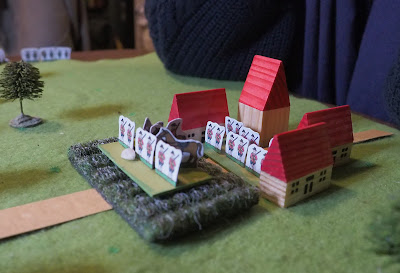 After their success against the lead unit of Royalist horse, Haselrig had been content to hold Parliament's horse in position to the right of the hill. 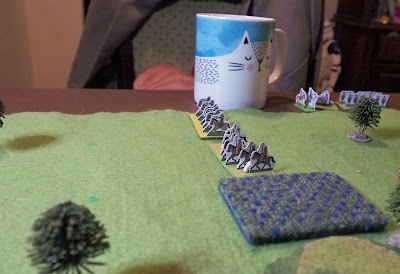 The Royalists consolidated around the ridge. They had scored a pyrrhic victory, and their own troops were battered. 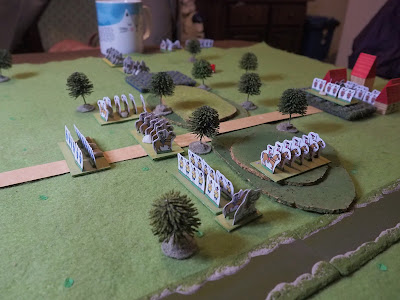 Parliament's troops were tenacious in this game, inflicting hits on me most turns, whilst I was unable to return the favour until right at the end.

I tried a small tweak to commanders in this game, although didn't really get to use all of it. Firstly when totalling the army's total SP (and therefore their breakpoint), a Commander counts as 1SP only. When lost a Commander counts as 1SP towards the breakpoint total. The player can bring them back at the cost of one action, but it must be the last action of their turn (this stops you bringing back the commander and immediately using him to get a +1 in combats you initiate).
Posted by Kaptain Kobold at 22:49