Catherine played another round of our gladiator campaign this evening.

With my school having the highest Prestige I was obliged to put my best gladiator on the bill, or lose face with the editor of the games. My myrmillo Pugnax was therefore pitted against Catherine's dimacherius, Lenia (who fought in the previous round). Catherine's hoplite Danaos ended up against Spiculus again.

But the opening fight was between two novice gladiators - from Tertius' school the spear-armed Ellenikos and from mine the Gaul, Vocorix. 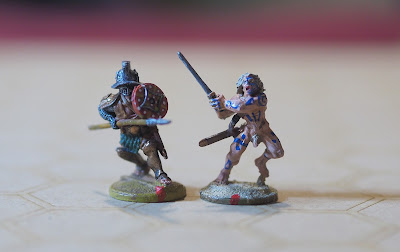 Vocorix, unhindered by armour ... or clothes ... moved quickly, and had the potential to strike hard with his big sword. But Ellenikos got in a hit that saw the Gaul tripped. 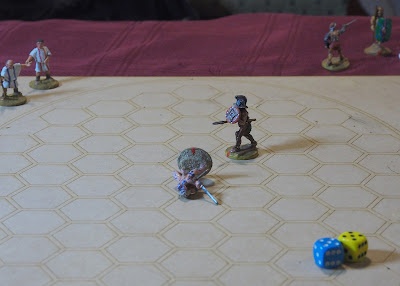 The fight moved up against the wall of the arena, as both gladiators fought to trap their opponent. 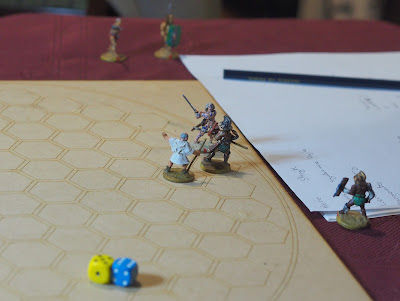 Vocorix was badly wounded and Ellenikos not faring much better when the referee declared the fight a draw after ten turns. 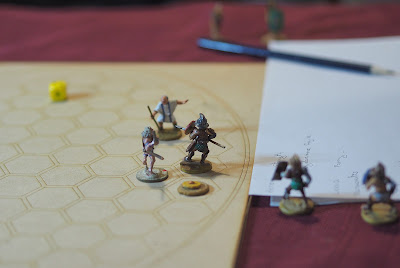 Neither school gained nor lost anything for the draw.

Pugnax's fight against Lenia was next on the bill. 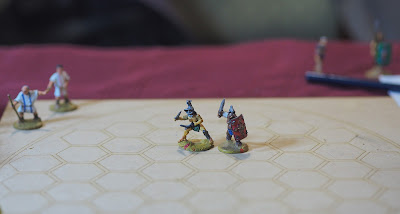 The two fighters ducked and dodged. Both had some skills which kept the fight tense and exciting. 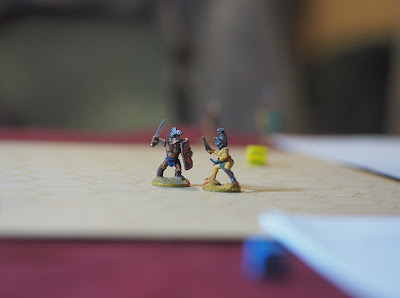 After nine turns it looked like the crowd were going to get another bloody draw, but in a sudden exchange Lenia stumbled with exhaustion and Pugnax, seizing the opportunity launched a furious attack, running her through and killing her instantly. 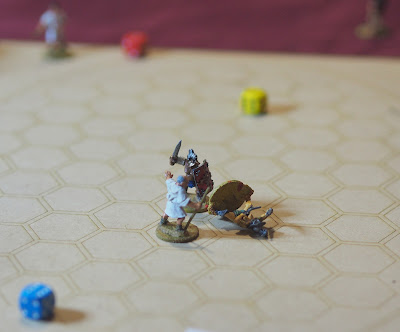 This gave me another point of Prestige.

The final bout of the day was the rematch between Danaos and Spiculus. 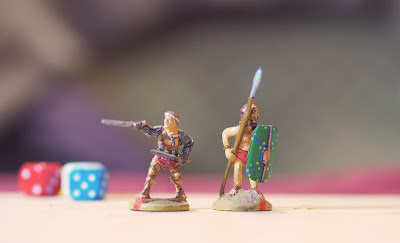 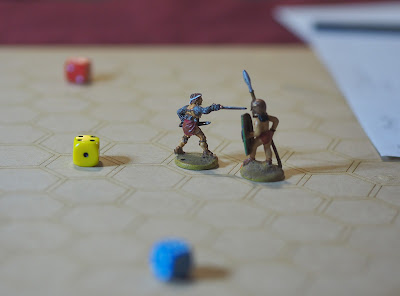 And a mere four turns into the fight Danaos tripped Spiculus, rushed forward and forced the lighter gladiator to submit.

This was the moment the crowd has been waiting for; an appeal. 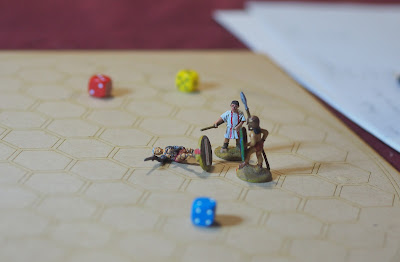 It was close, but they let Spiculus live.

Both of the fights that has ended in a result were won by the more experienced gladiator, so no-one gained any skills this time around. My school now has 3 Prestige, though, Catherine's has 2 and Tertius has 1.

As the school with the highest Prestige, I will be required to put my best gladiator on the bill for the third event, so we'll be seeing Pugnax again at least. But who else will take to the arena? Read the next part to find out ...