"You are the Captain of the USS Crypsis - a RPTR class starship on routine patrol of the Auborne system when a distress call was received. Upon warping in you quickly realize it was a trap! With the help of your crew, you must survive until a rescue fleet appears."

This is the premise of Deep Space D-6, a rather nice solitaire boardgame which I downloaded and printed the other day. Whilst there is a commercial version, with lovely components, extra rules and a selection of ships to play, there is a basic print and play version available as a free download for anyone who wants to give it a go. You can find it via its Boardgame Geek entry.

The mechanisms are relatively straightforward. Your ship's crew is represented by a hand of six dice. At the start of each turn you roll them, and the results dictate which crew assignments are available that turn - 1's are Command, 2's are Tactical, 3's are Medical, 4's are Science and 5's are Engineering. Command dice can alter other dice, tactical shoot at things, medical heal crew, Science operate the shields and keep threats at bay and Engineering repair damage. 6's are bad, representing Threats appearing on the scanners. Threats are the key to the game; there is a deck of 36-42 cards (depending on how many 'Nothing Happens' cards you choose to put in), mostly containing some obstacle or attacking enemy ship. Threats can be external (you shoot at them) or internal (issues on the ship which cause problems until specific crew specialisms resolve them). Each turn you automatically gain a new threat, and the scanners may generate more if you roll lots of 6's. So you roll your dice, assign the crew to deal with existing threats and issues according to what you have available, generate a new threat and then resolve all currently active threats to see if they damage the ship. You win if you get through the deck and eliminate all active external threats. It's not easy (even with all the 'Nothing Happens' cards in play). You lose if your ship reaches zero hull or, if at the start of a turn, you have no crew dice available to roll.

I played  quick game last night just to try it out, didn't put much effort into it and got destroyed about a third of the way through the deck.

This evening I decided to give it a proper go. This was the start of my first game, with the initial threats consisting of an Assault Cruiser and an approaching Meteoroid. The latter is a nasty threat, since it automatically scores damage, even if you destroy it. All you can do is attempt to delay it so that when it hits your ship has enough hull and shields to take the impact. 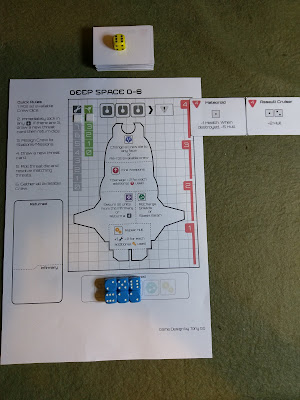 Things quickly went pear-shaped, as a lack of Tactical rolls prevented me from engaging the steadily accumulating wave of Threats. You can see a series of die results on each card. A single Threat Die is rolled, and every Threat card with the resulting number on it is activated. At this stage rolling a one was not a good thing to happen. I rolled a one. 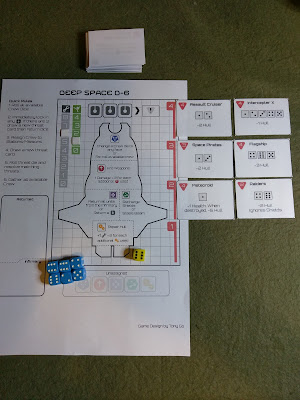 The next turn I rolled another one, and the meteoroid smacked into my virtually crippled ship, destroying it. I was less then halfway through the deck. 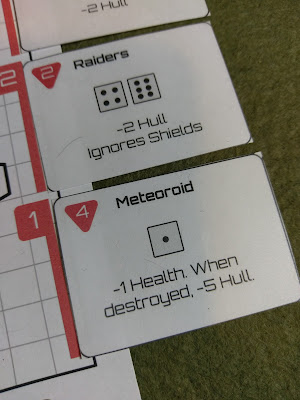 My second game went slightly better, but again, I couldn't stop the Threats accumulating. The end came when I was attacked by a horde of cloaked threats (the card to the left of the main board), a double-whammy for which I was ill-prepared. 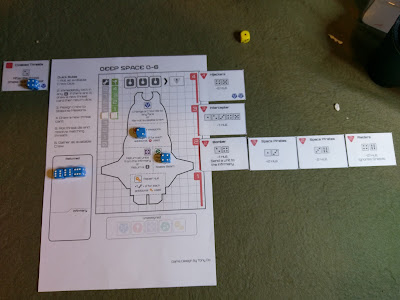 The third game went far more smoothly. I got great rolls virtually all of the way through, which meant I was able to stay on top of the Threats. Yes, there were a few hair-raising moments, but I eventually made it to the end of the deck. At this point things could still have gone badly; I still had to resolve the remaining three external threats (the cards on the right), but three of my six crew dice were in the infirmary, and one of the others was 'Distracted' ("Show me some more of this thing you Earth-people call 'kissing' ..."). If the two active dice I had ended up locked in the scanners I would run out of crew and lose. 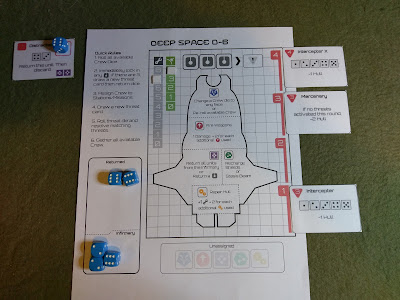 I didn't. I managed to stay on top of the Threats, recover my crew from the Infirmary ("I'm a doctor, not a random-number generator!"), save my sixth crew dice from the amorous clutches of a purple-haired alien sex-goddess and finish off the last of the attacking enemy ships just as the relief force arrived. 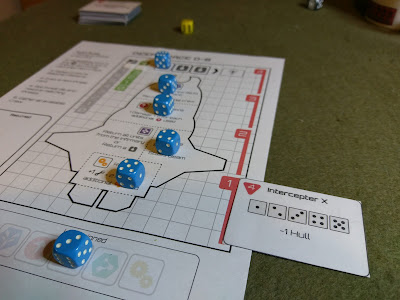 Of course, having defeated the game with the 'Nothing Happens' cards in the deck, I now feel honour-bound to remove some or all of them and increase the difficulty.

The game takes about thirty minutes to play, and occupies a reasonably small footprint, so is a perfect lunchtime game. I thoroughly recommend it.