For the next game in my attempt to play all of the scenarios in 'One-Hour Wargames' in order I stayed in Latin America, but switched to a different conflict. The Reform War was a civil war fought in Mexico between 1857 and 1861 between the traditionalist Conservatives and the republican Liberals. The Liberals won, but various European powers, led by France, demanded repayment of debts incurred by the previous Conservative government (incurred in fighting the Liberals in fact). Mexico's inability or unwillingness to pay them led to the French intervention - the so-called Mexican Adventure - of 1861-67.

I don't know a lot about the Reform War, but really the troops that fought in it are much the same as those that fought in the Mexican Adventure, so I could use my figures for that conflict. My 6mm figures, naturally. It's just a matter of leaving out the French, Austrians, Belgians, Sudanese and Imperial Mexican troops in the funky uniforms Emperor Maximilian designed for them.

In terms of rules I went for Liberated Hordes because it was handy and because I rather fancy adapting them for the Mexican Adventure at some stage.

I rolled the armies using the tables in the book, with the only proviso being that a second artillery unit would be infantry instead. I'm pretty sure that neither side would have been exceptionally well-endowed with artillery.

The Conservative force got three infantry, one artillery and two skirmishers, which in this setting would be irregular guerrillas. This is one of those conflicts where the boundaries between bandits, organised guerilla bands and regular troops can be a little fuzzy though. 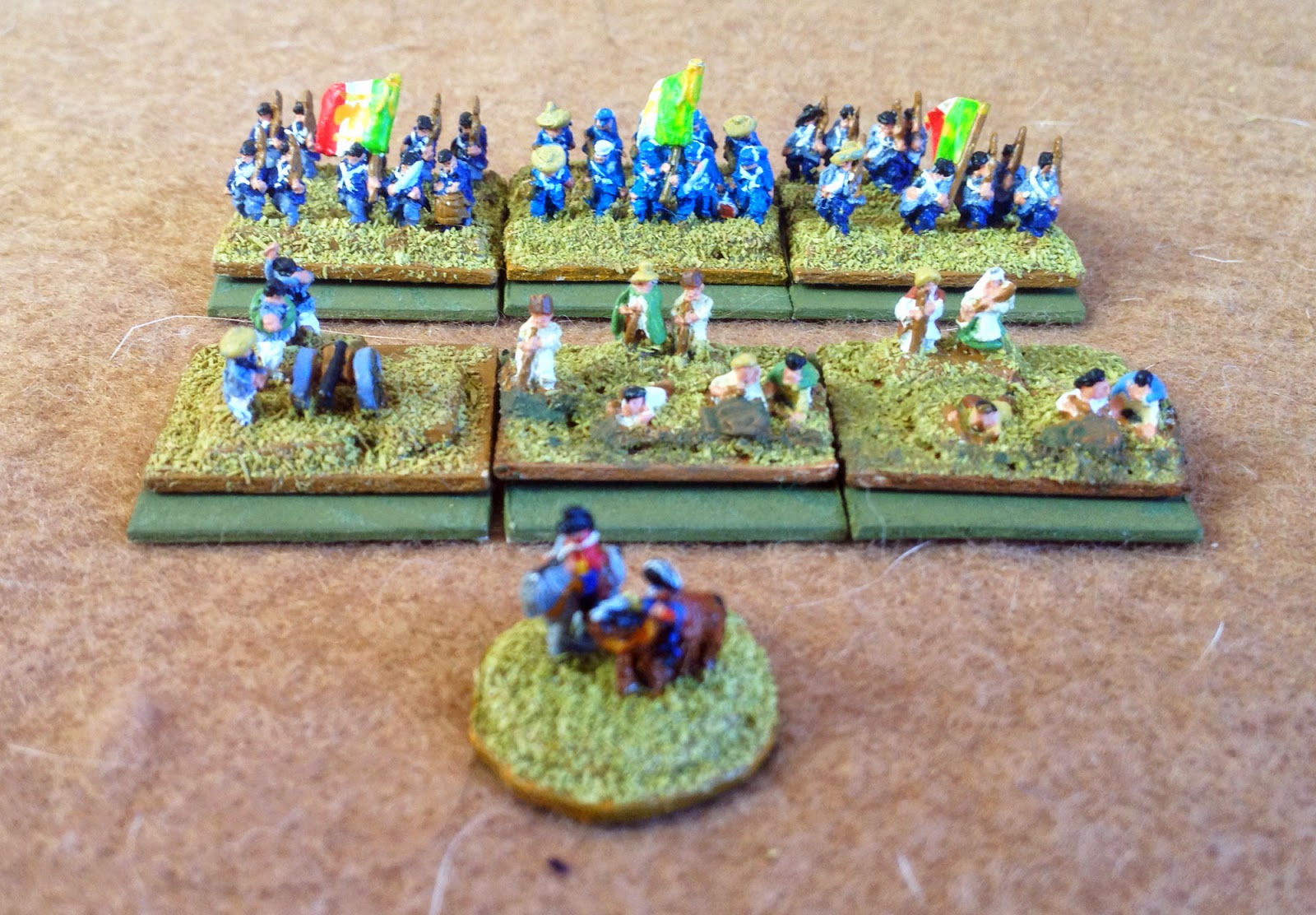 The Liberals got four infantry, one artillery and some cavalry. I went for cavalry in uniforms - the irregular cavalry you've seen in other games would have been just as relevant. 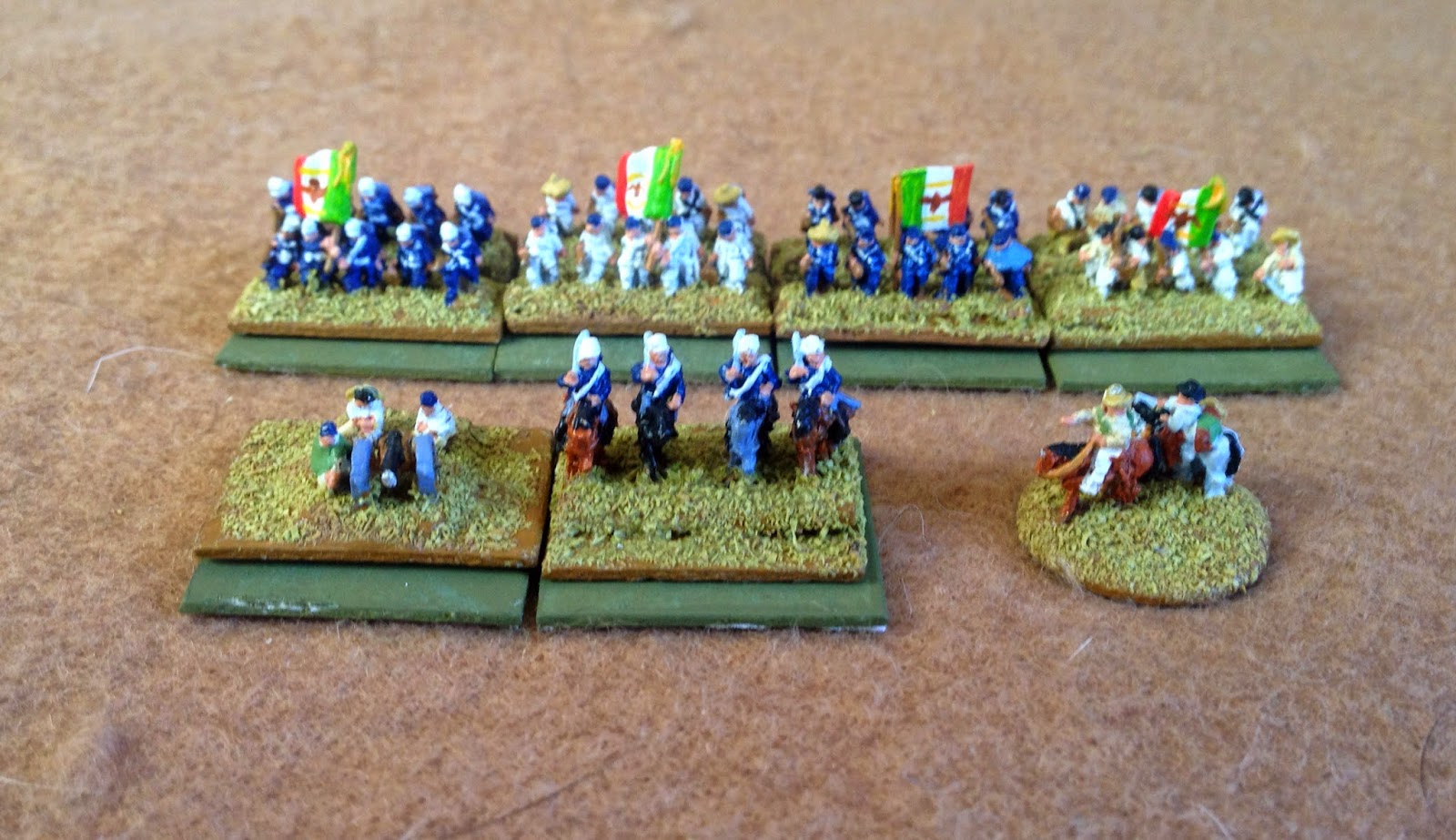 There is a lot to be said for making most, if not all, of the troops militia. However given the vulnerability of such troops I thought that it would make the scenario too hit or miss, so I left everything as normal.

The scenario itself is loosely based on the Battle of Salamanca. So loosely, it has to be said, that I read a couple of accounts of it before I could see where Neil Thomas was coming from. One army is marching along a road towards a small force of the enemy. Their objective is to get half off their force off the table via that road. Their opponents have the small blocking force in front of the column and the remainder of their troops on the flank of the enemy. They have to attack quickly before the blocking force is overwhelmed.

When I first looked at the scenario I thought that it was based on Beda Fomm. One day I'l play it with some WWII stuff and see how it pans out.

So, the situation has a Liberal army marching to the relief of a town when they find their way blocked by a small force of Conservatives. As they prepare to give battle a dust-cloud on their right shows a considerable Conservative force attacking their flank. Battle is joined ... 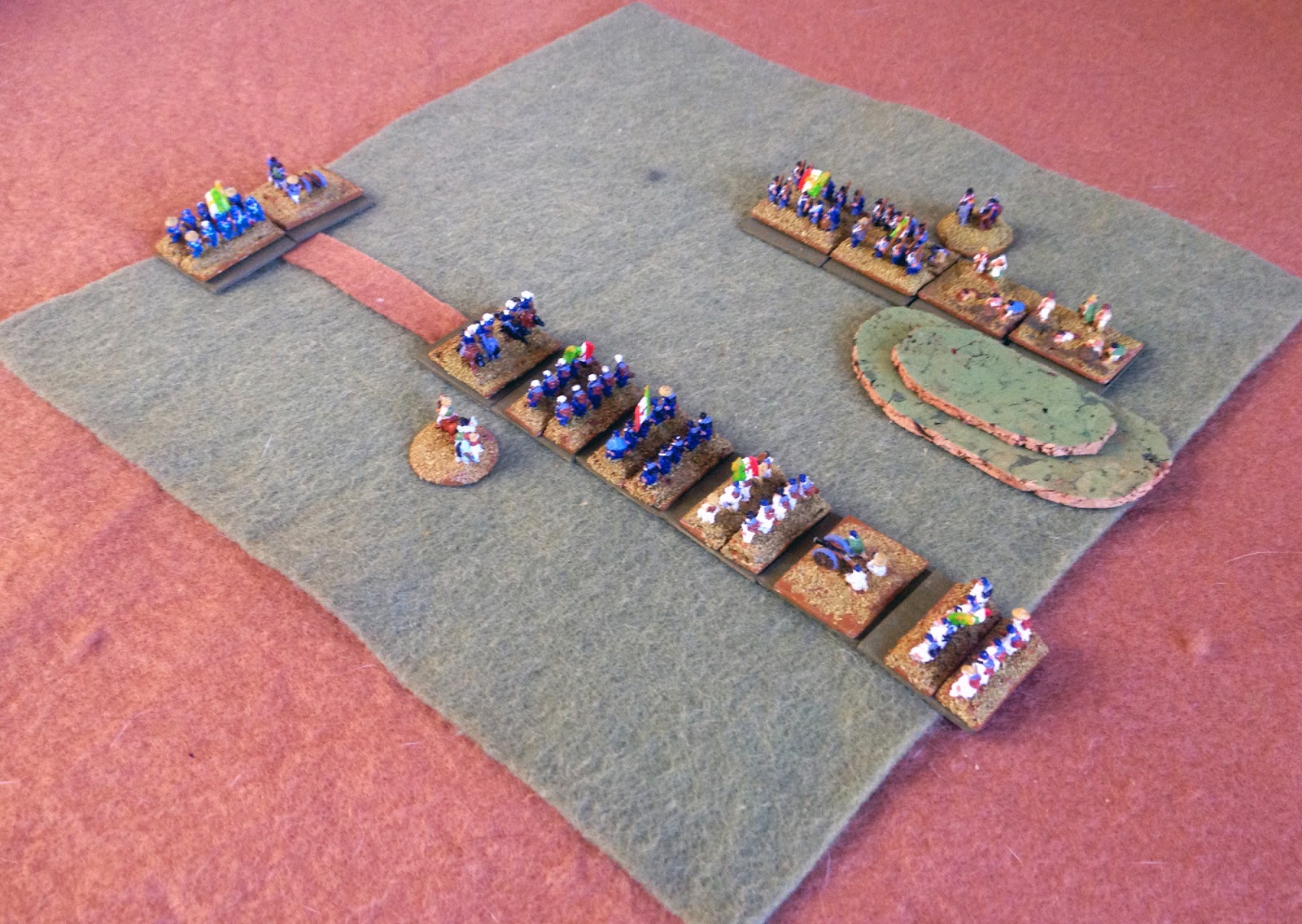 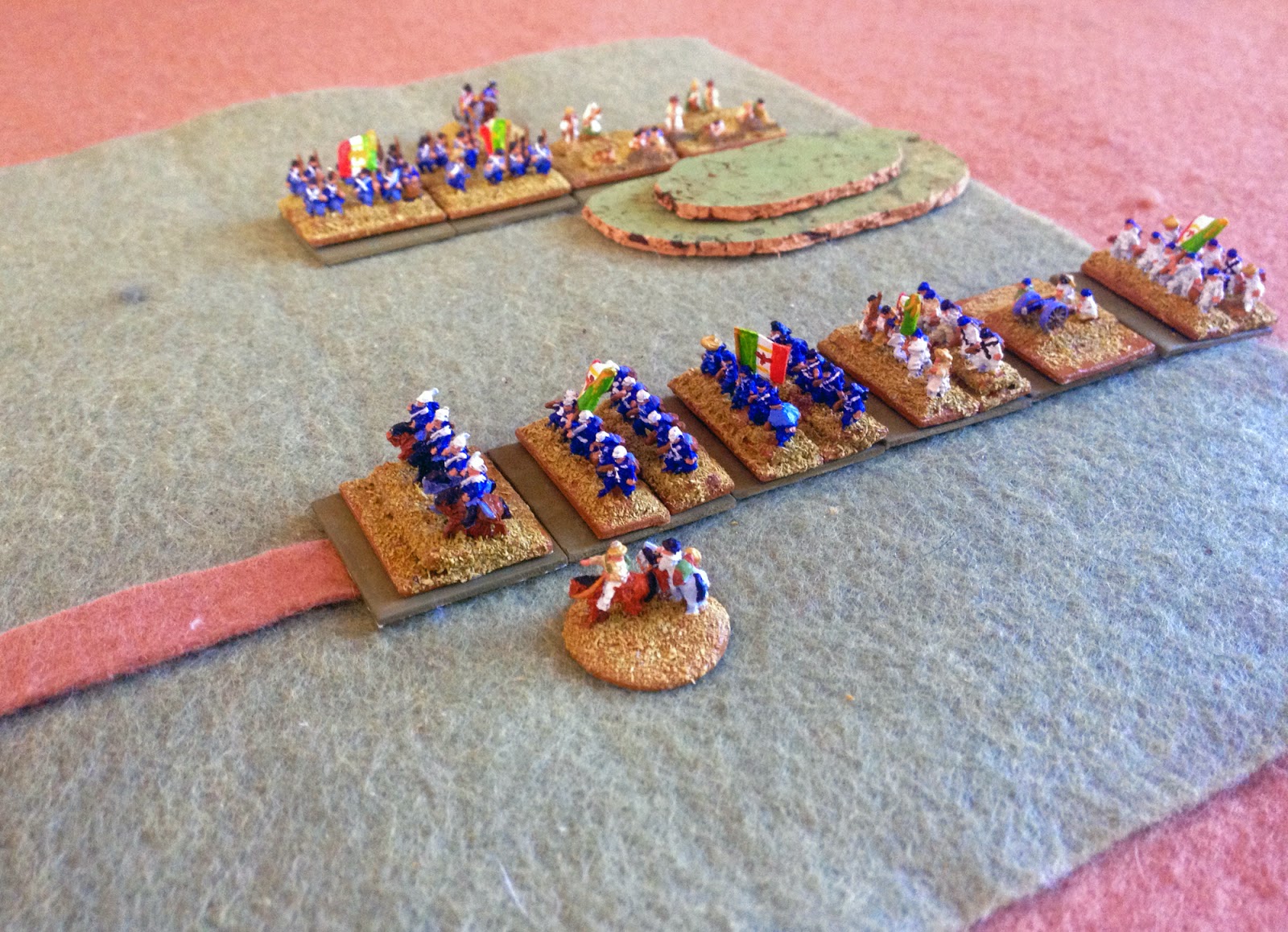 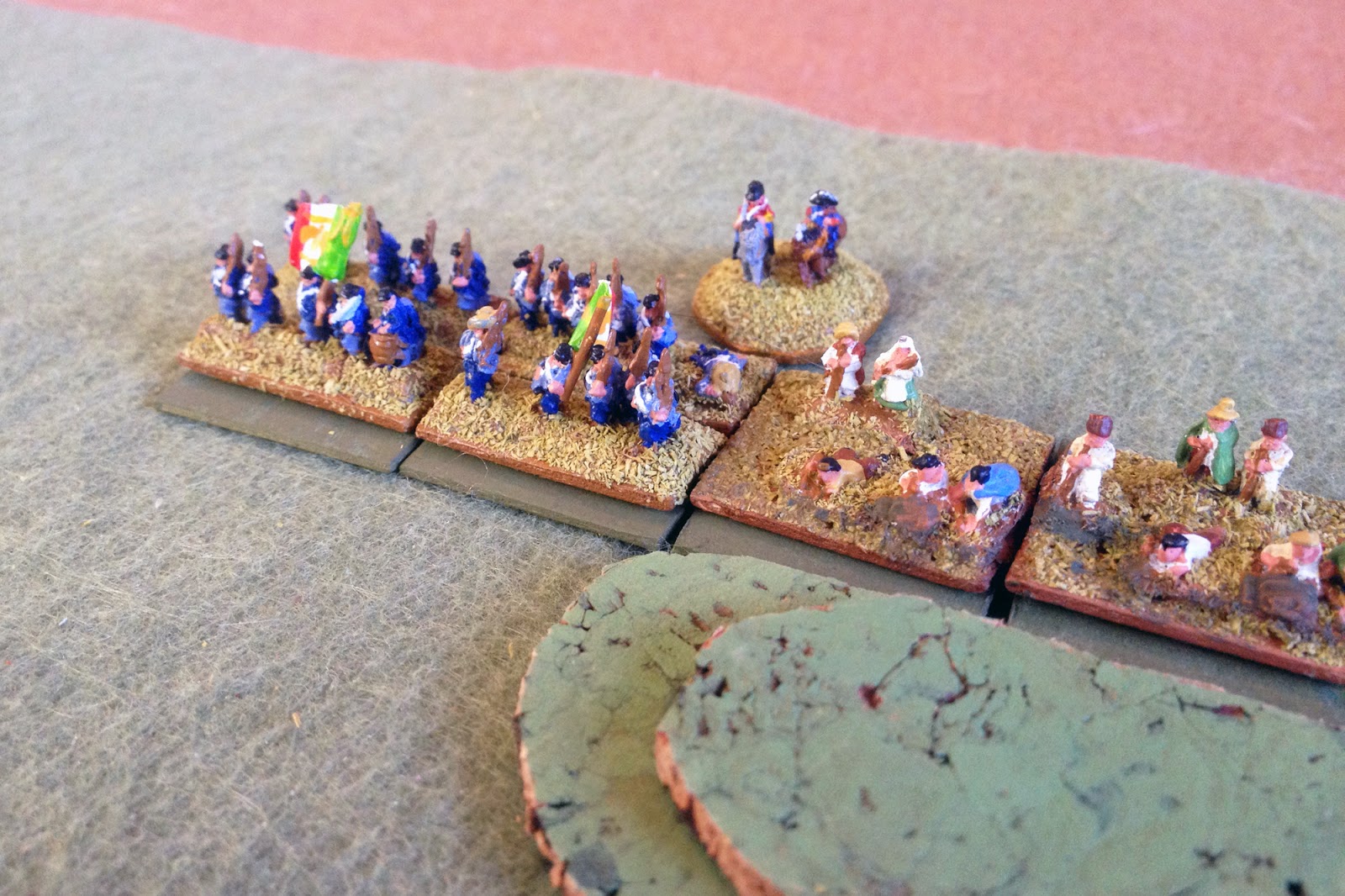 The flanked column actually gets to start in this scenario, putting the blocking force under immediate pressure. The Liberals attacked with their cavalry whilst some of their infantry came up in support. 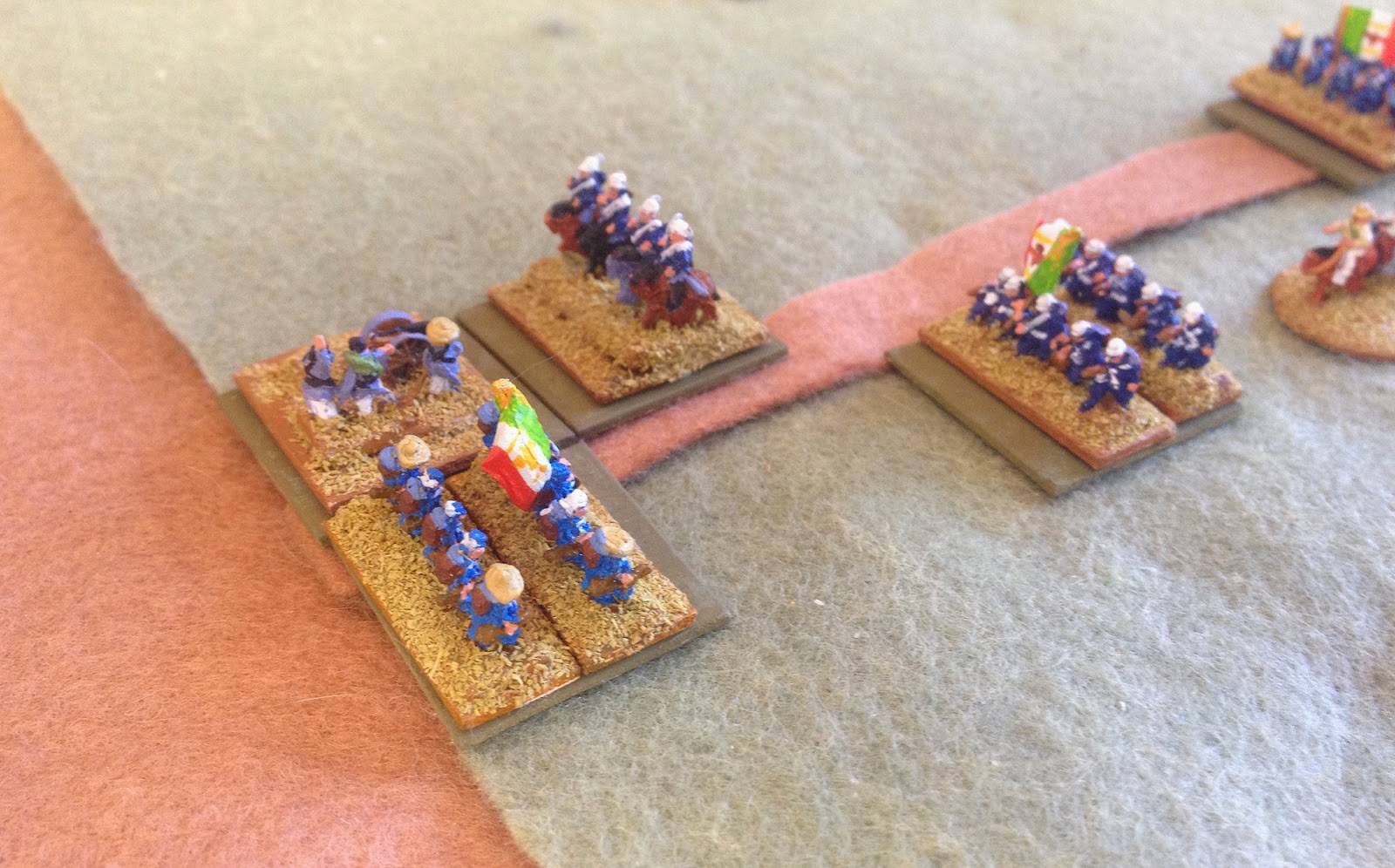 Unfortunately this left the rest of their column undeployed. The Conservatives used their first moved to advance into a firing position. 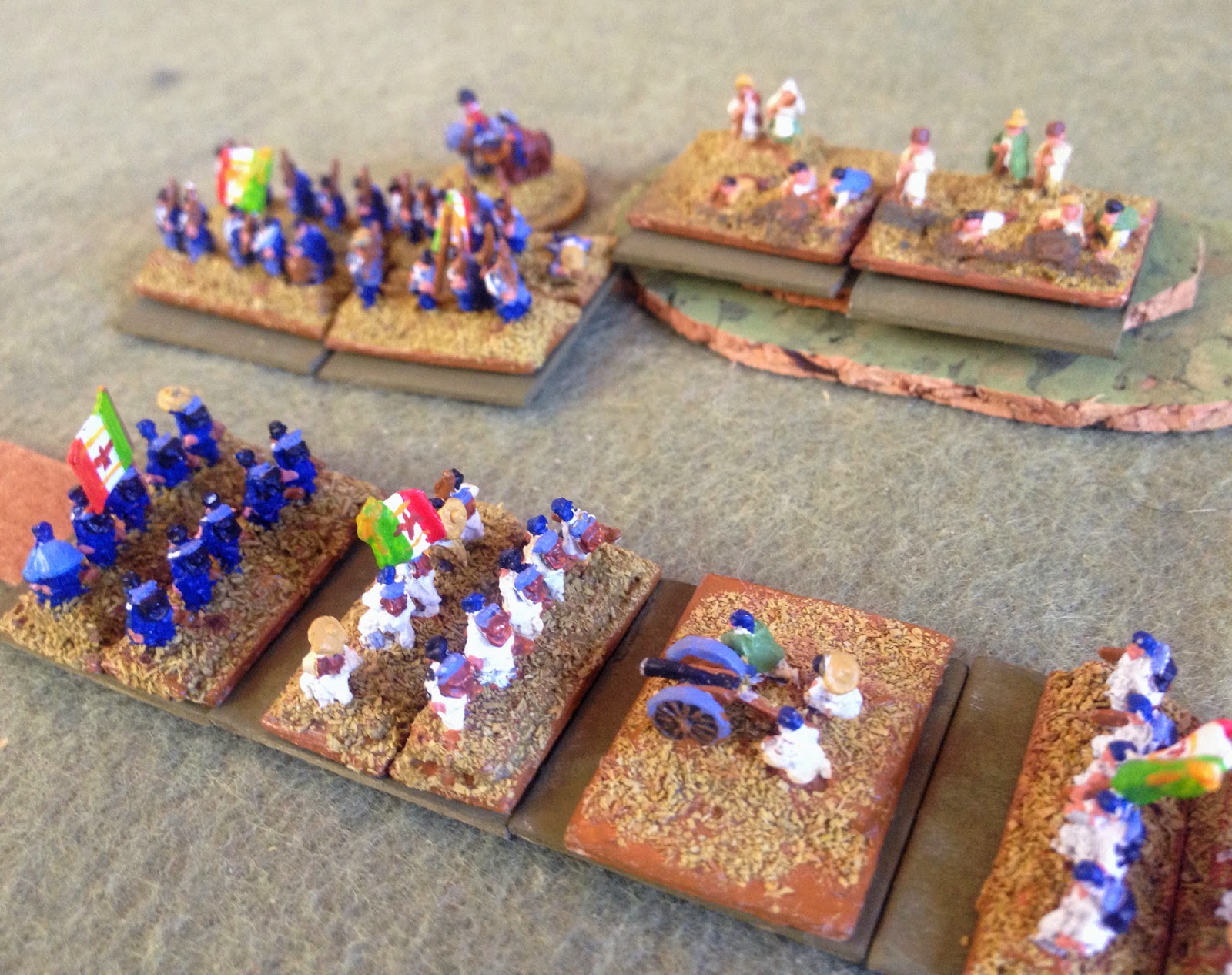 Musketry claimed units on both sides and in both cases because the units couldn't retreat. In the Conservative case one unit of the blocking force recoiled off the table and in the Liberal's case the unit at what was now the head of the columns couldn't recoil because it would otherwise push the rest of the column off the other side of the table. 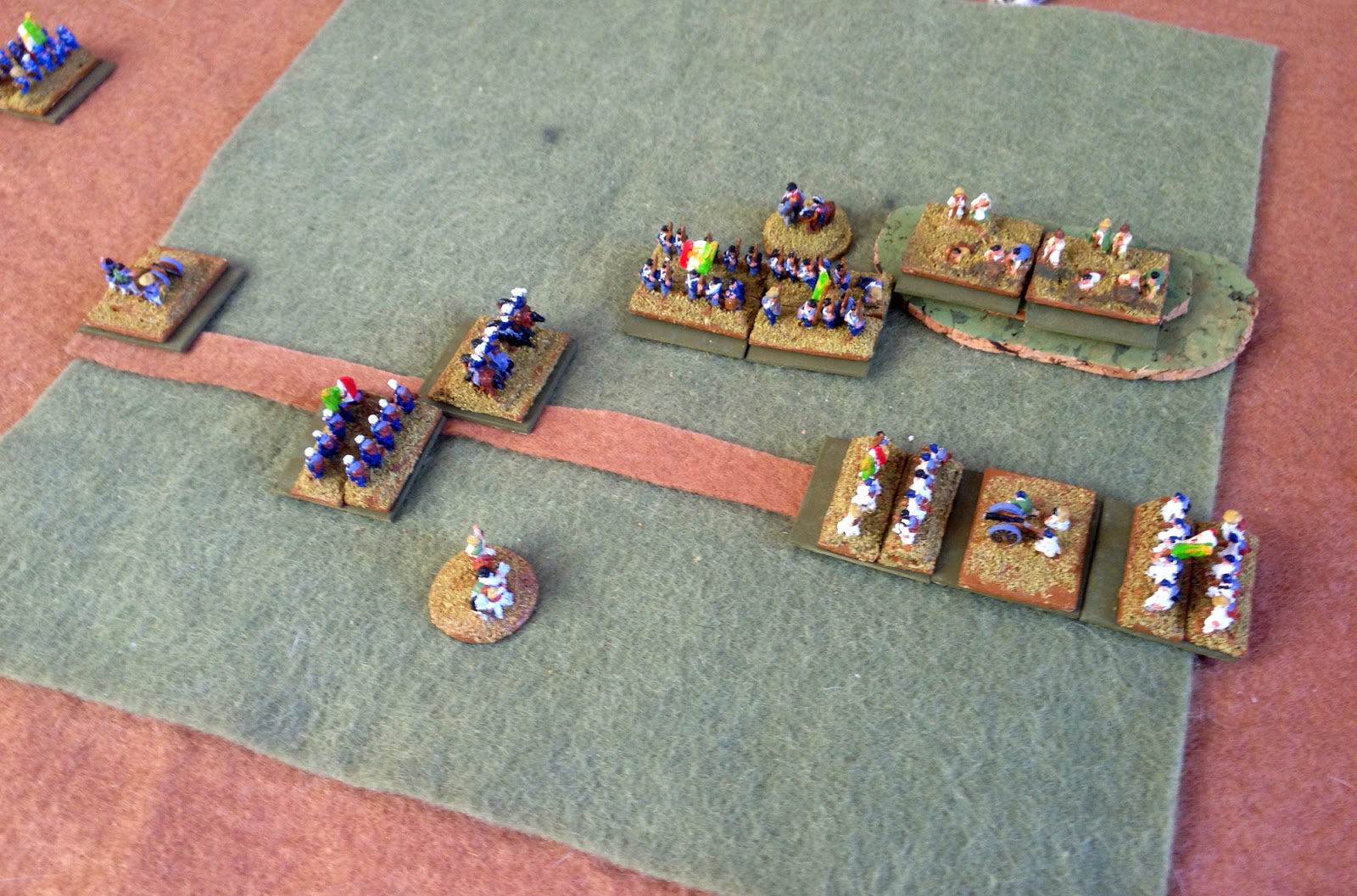 The Liberals attacked with their cavalry again, driving off the Conservative artillery and clearing the road. Now all they had to do was get three units off the table via the road. 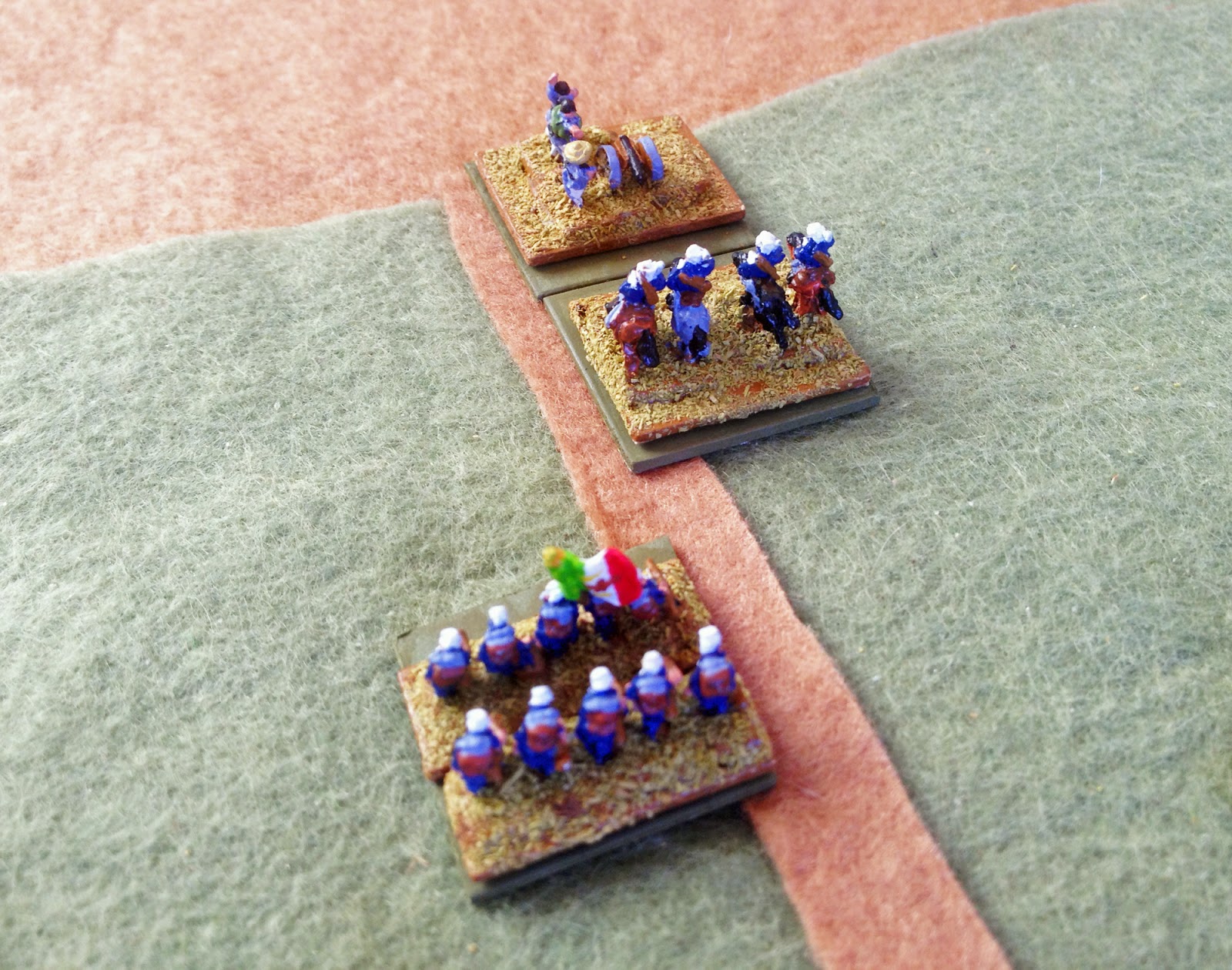 The Conservatives pushed forward to pin the column more closely, even committing the guerrillas to close combat. This stopped the Liberals from rushing down the road to victory. 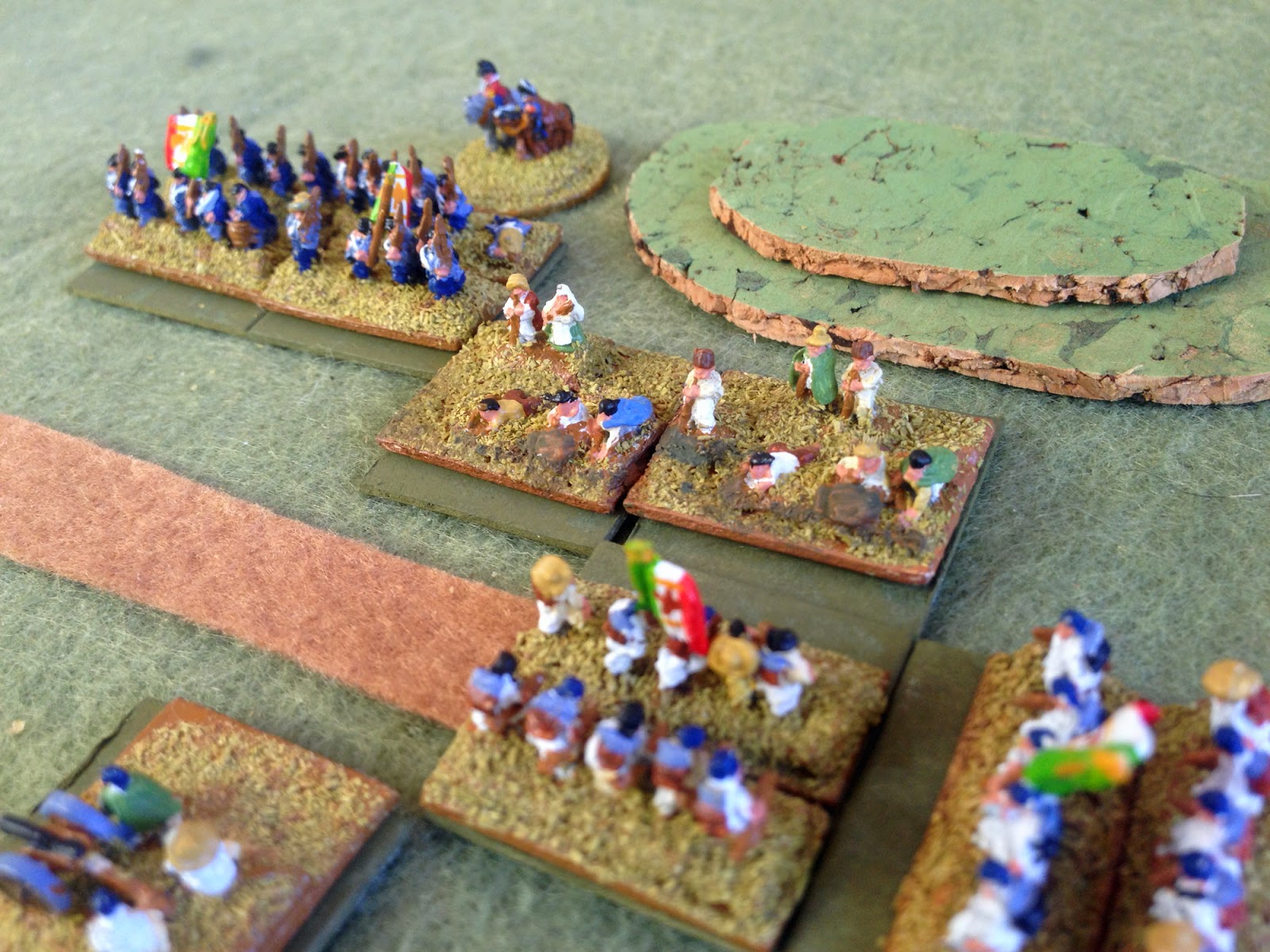 The Liberals had a tricky choice. Two of their units had a clear run at getting off the table. But this left them with job of pushing one of the three units in the now pinned column through a superior enemy force with no support. The compromised; the lead infantry unit marched off the table, whilst the cavalry turned back to try and clear a path for the rest of the troops. 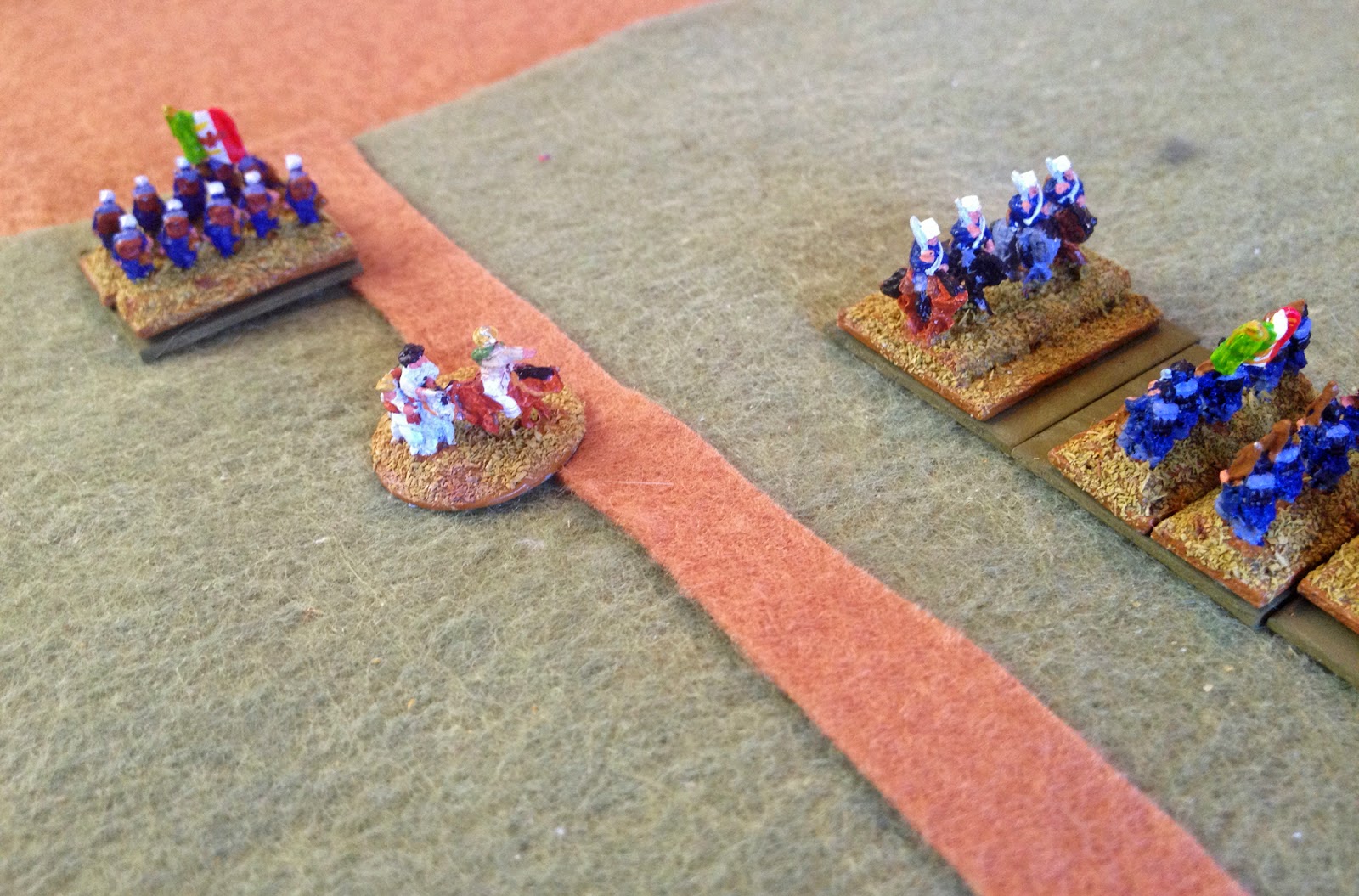 The irregulars forced another Liberal unit to retreat off the table ... 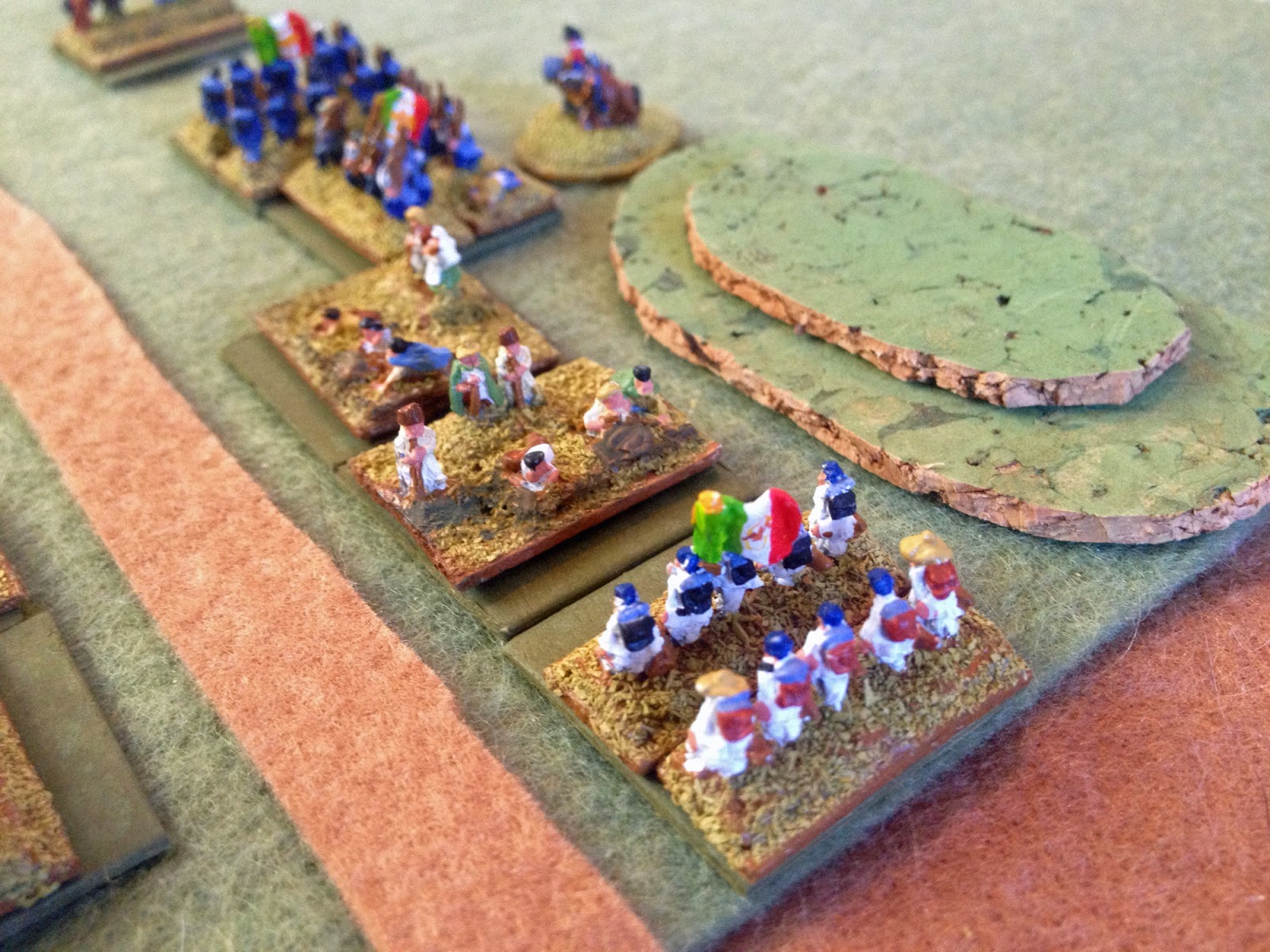 ... whilst at the other end of the road Liberal infantry totted up their first victory point. Unfortunately the cavalry sent to support the rest of the troops had proved reluctant to close with the enemy. 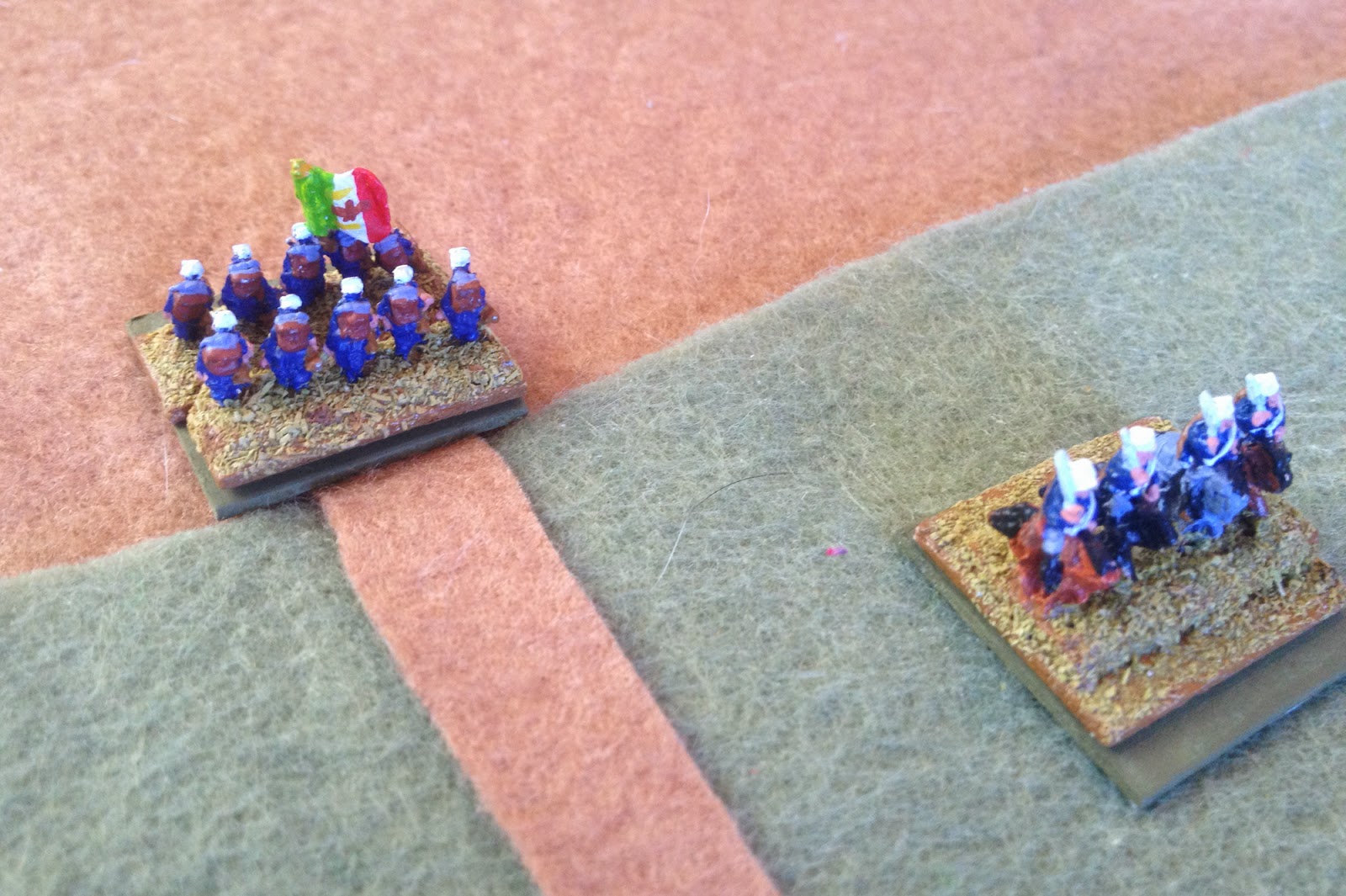 The Conservatives kept up the pressure, and cut down the Liberal artillery before it could deploy in support of the infantry. 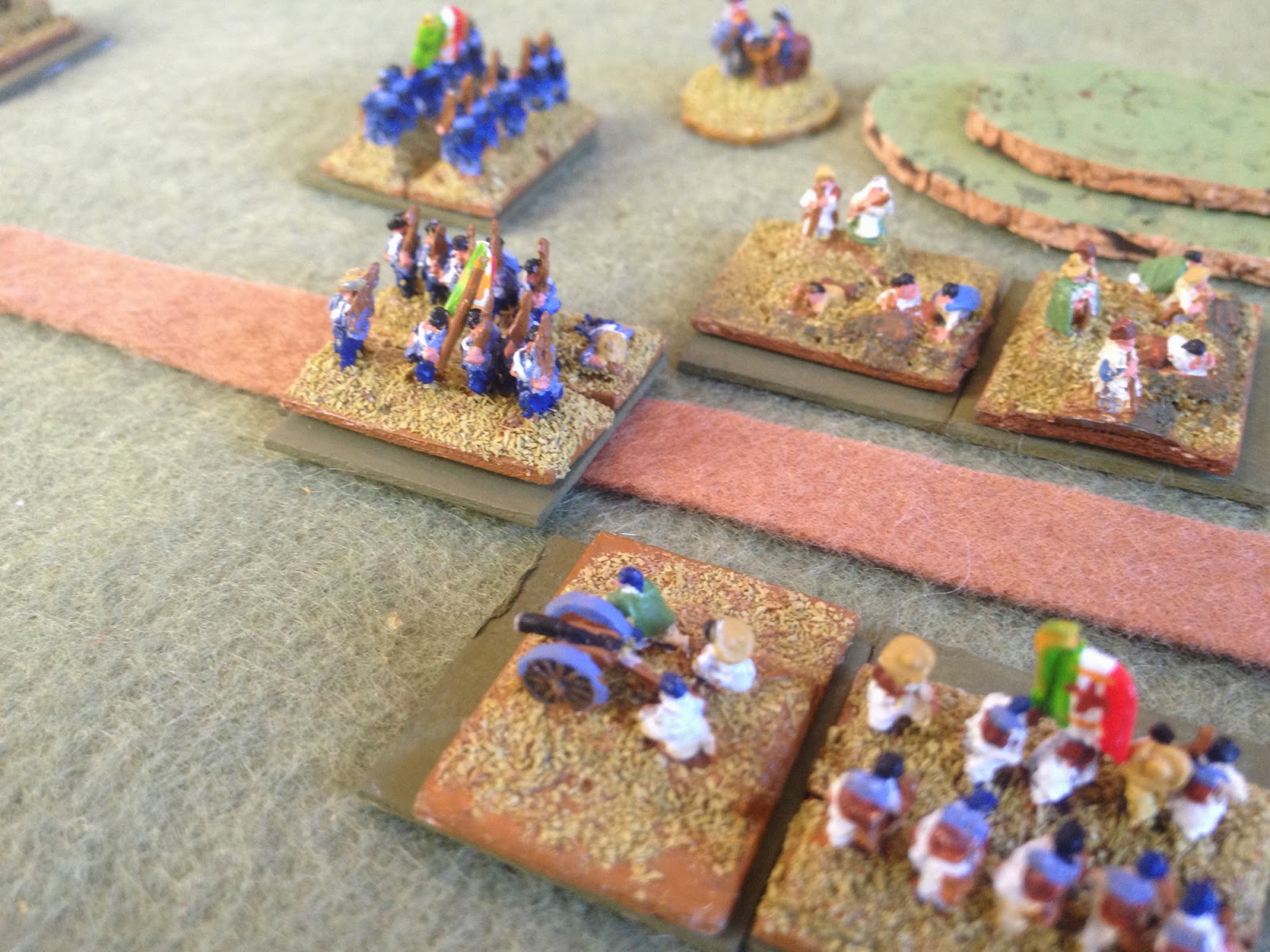 The Liberals were now down to two units - the cavalry top-left and the infantry bottom-right - and had to get both of them off the table to win. This was not going to be easy. 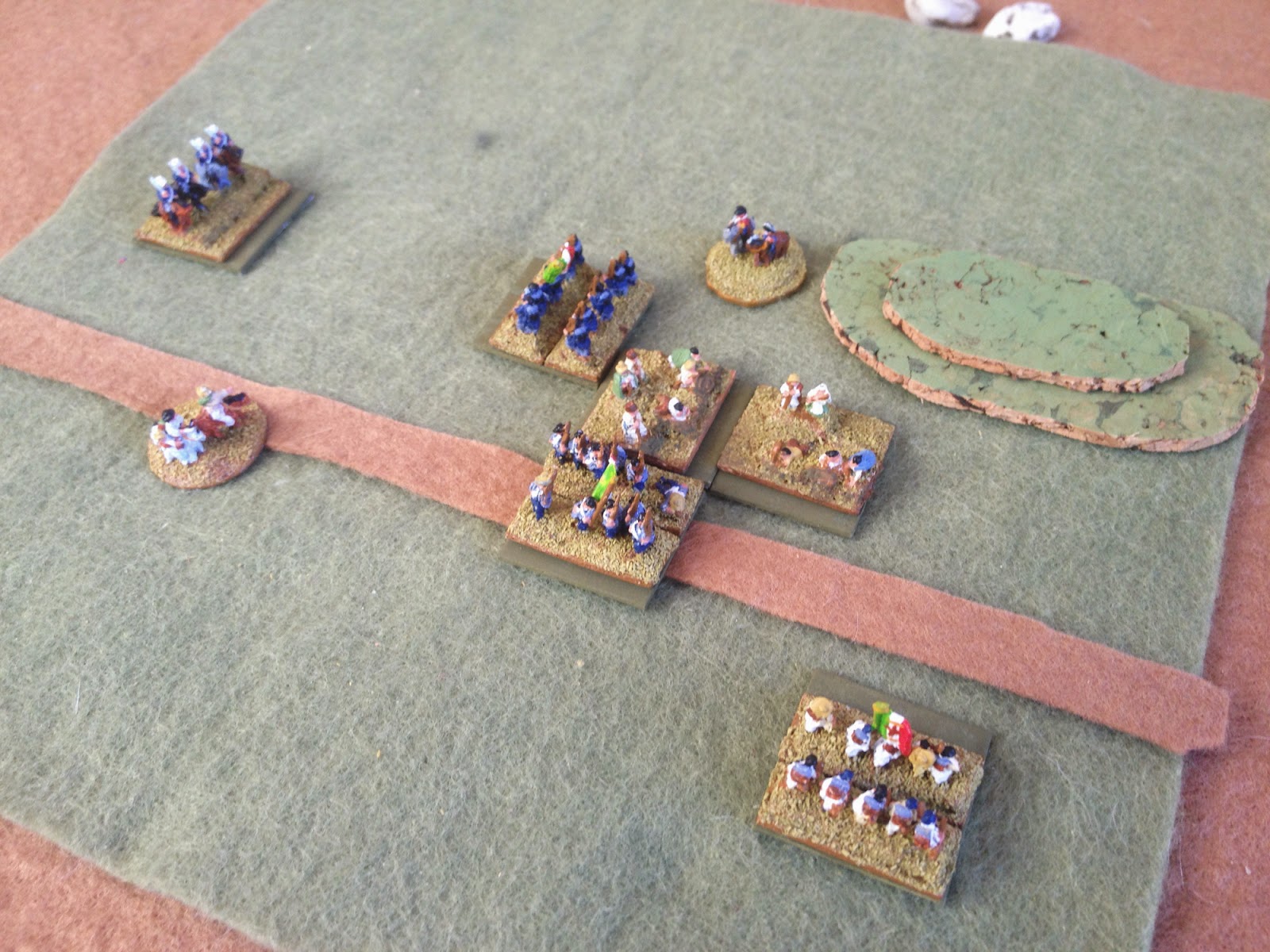 The Conservatives moved to block a direct run down the road, then took the Liberal infantry under a steady fire. It ran. 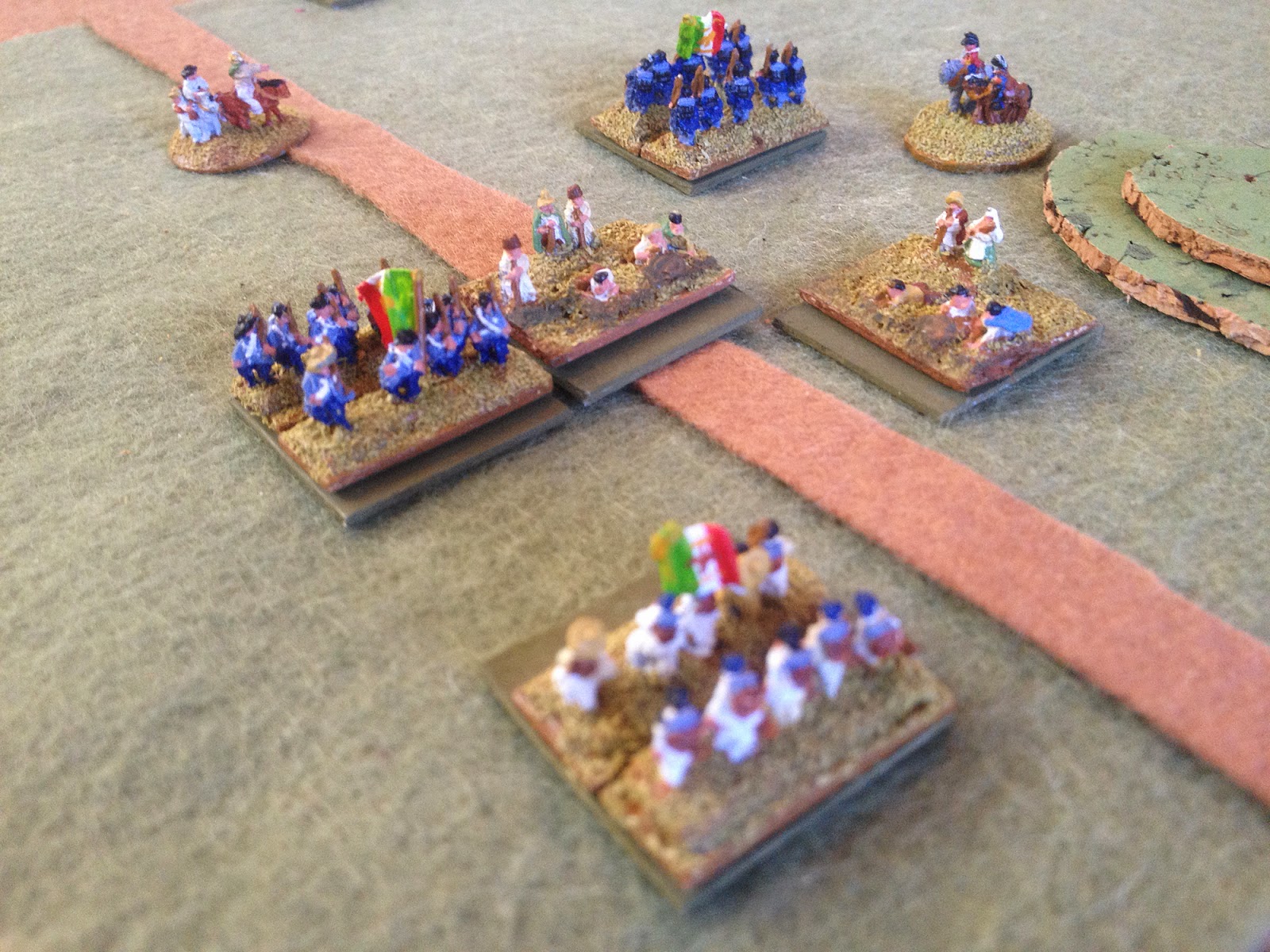 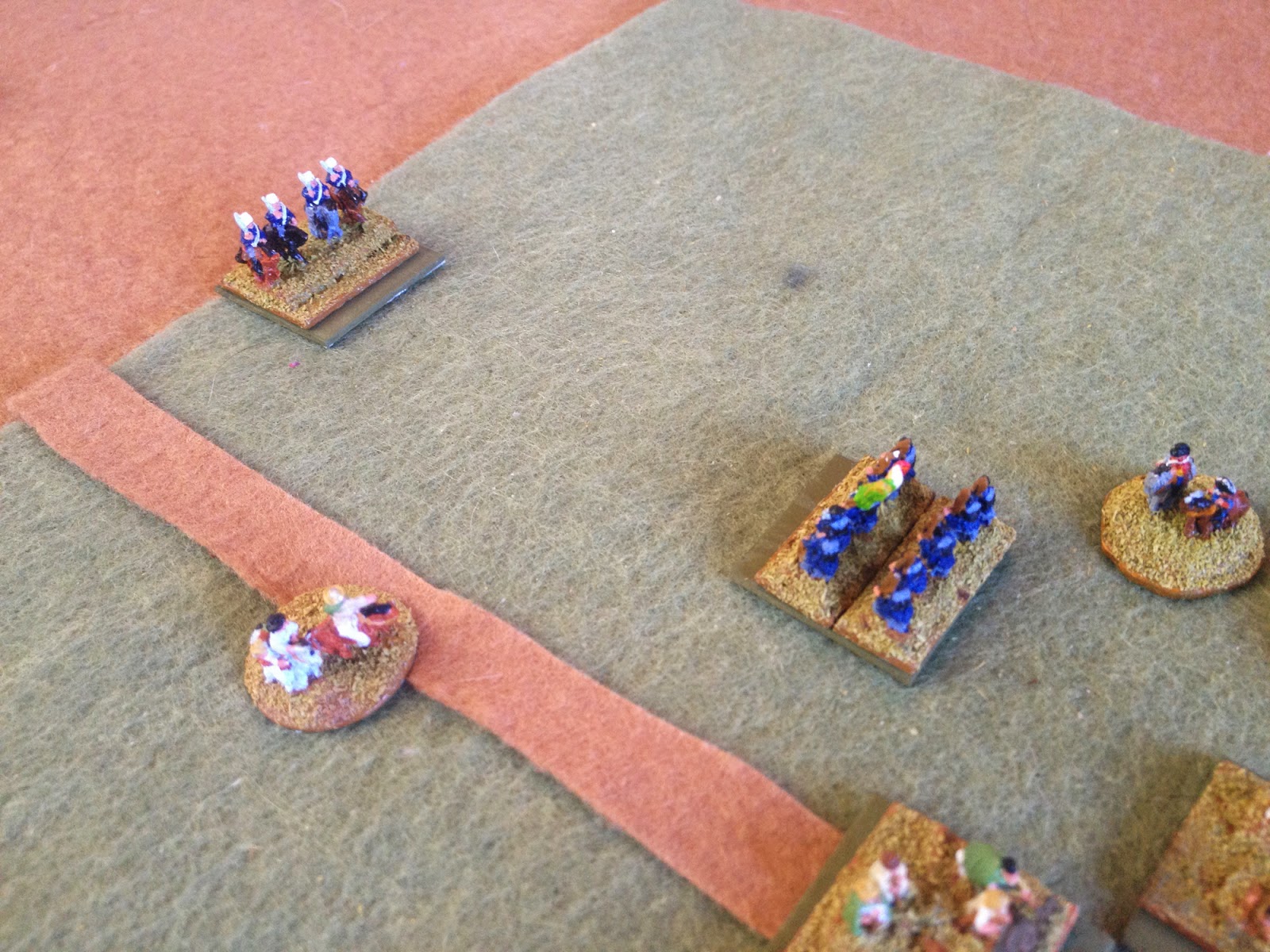 The battle took just five turns of the fifteen allotted to it.

Despite the short length it was fun to play. But it did highlight the issue of how scenarios make certain assumptions about the rules used to play them. This game was heavily influenced by the fact that units were forced to retreat off the table edge, especially in such a tight playing-area, and also by units being pinned by enemy units - the use of threat-zones that limited movement. Neither of these issues would happen if I'd used the rules in 'One-Hour Wargames', which do not have retreating units or any restriction on movement in proximity to the enemy. In addition the Liberals, who are required to be fairly active, rolled badly for PIPs, which left some of the army vulnerable at key moments. Again, this wouldn't have happened under the 'One-Hour Wargames' rules. The lesson is that you either have to adapt the scenarios for the rules, or choose rules more suited to the scenario. For example, in this one I'd use a slightly bigger playing area, so that the armies aren't deployed right on the edge. Since exiting from the edge would now be harder to do, I'd have a vulnerable camp behind the blocking force and give the outflanked force a win if they can take it. So they still have to push along the road in force and with speed, but the number of units they do it with is less important.

I might try this one again with the OHW rules (or my variant of them) and see how it differs.