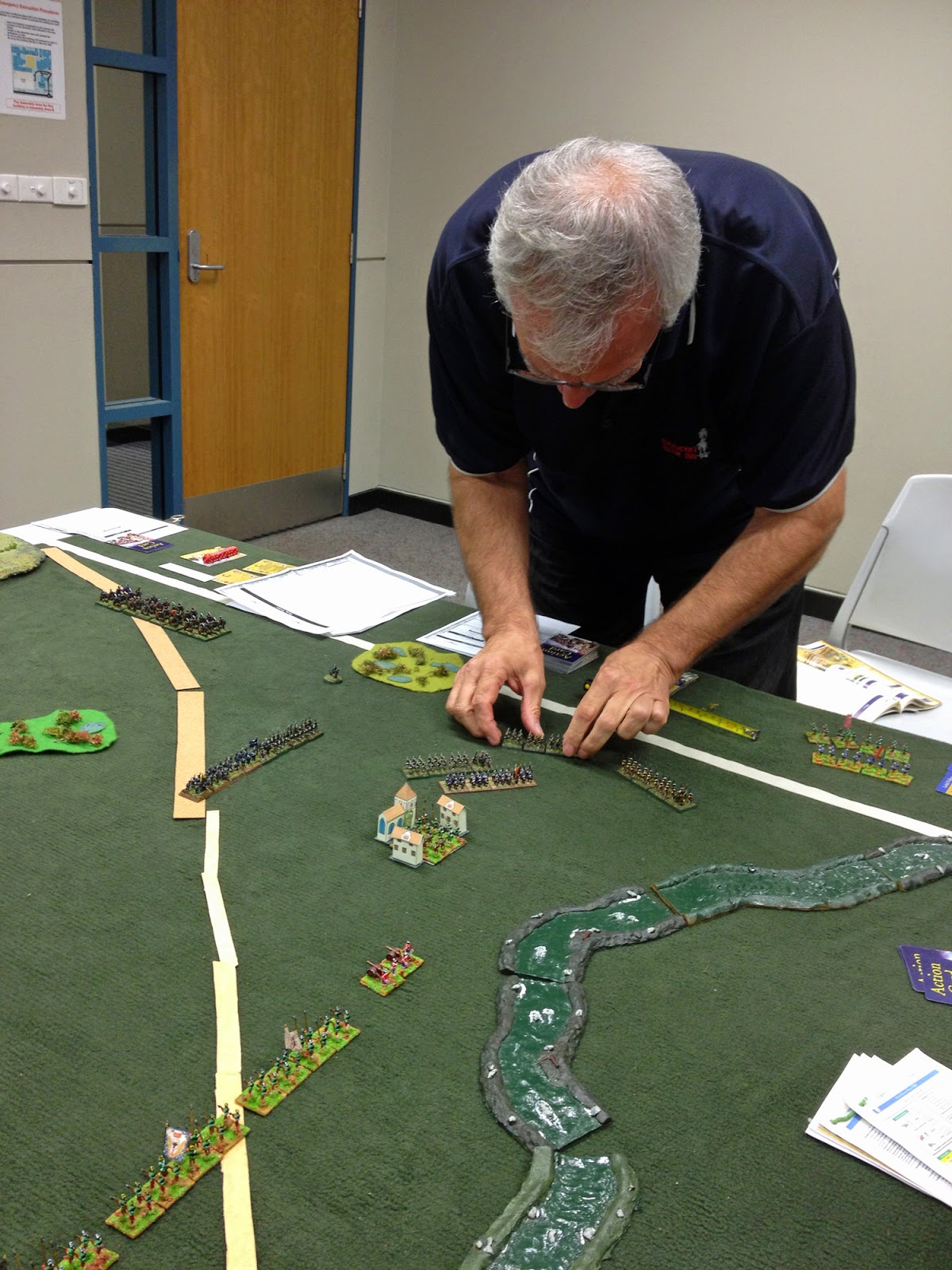 Last night we replayed Caesar's Oudenarde scenario for Maurice. When we did it last year the French were cut down by the Allied lethal volleys after a sluggish start. Caesar had tweaked the scenario such that the French could attack from the off, but the Allies had to hang on until reinforcements arrived. This gave the French an advantage in numbers but at the risk of enemy troops appearing in inconvenient places if they didn't win quickly.

Ralph and I took the Allies (with Dave standing in for Ralph after he left). Gary and John took the French. Caesar held the coats and read the rules that no-one else had bothered reading. Troops were a mix of WSS, GNW, SYW and ImagiNations 10mm, mostly from John's, Caesar's and my own collections. We have to club together for these bigger battles and use what we have.

Here's the deployment from behind the Allied lines. I had Malborough on the left. Ralph as Eugene was on the right. 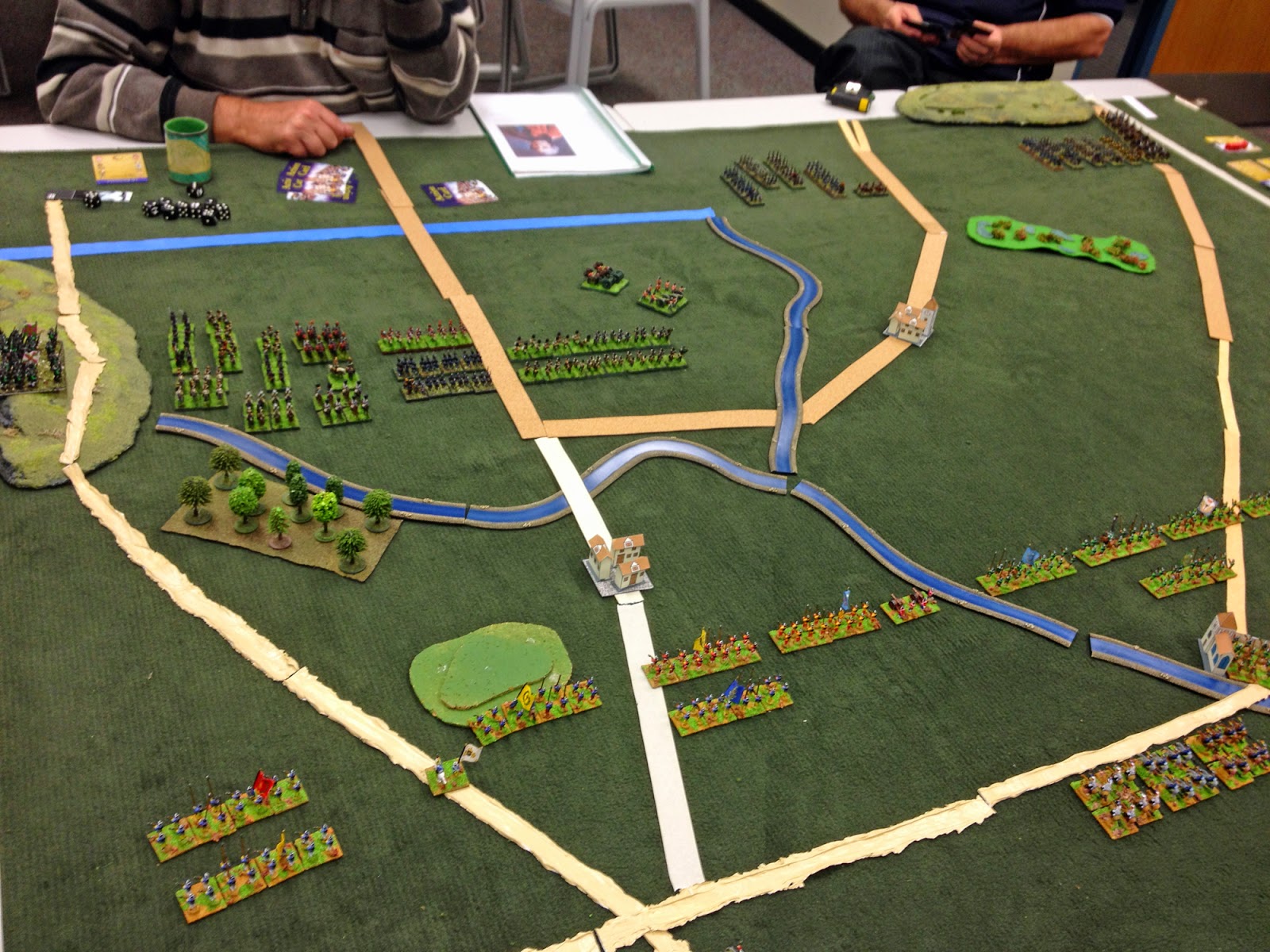 Marlborough's force looked a little sparse compared to that of the French facing them. Still, we knew that our Lethal Volleys would deal with them 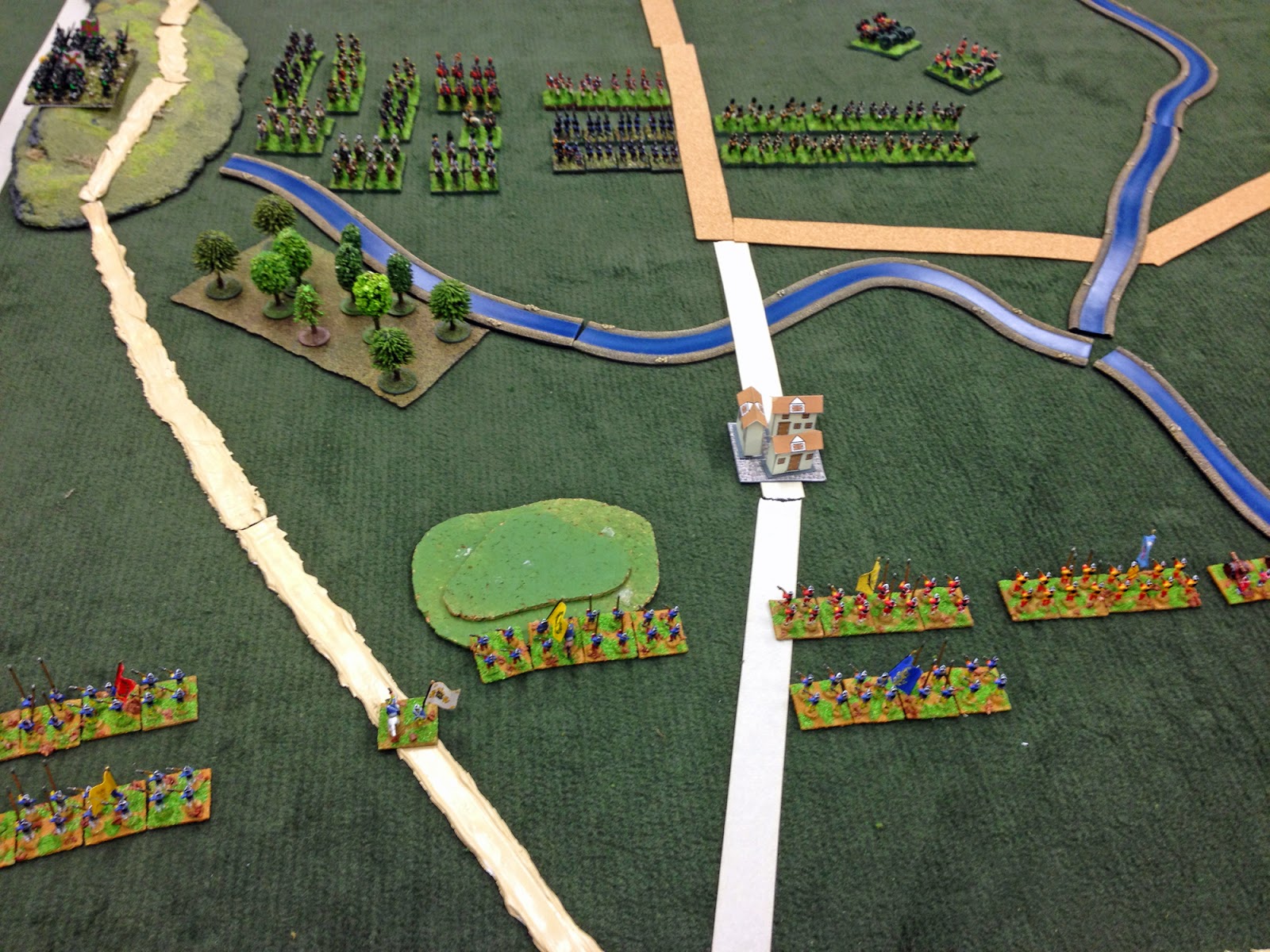 Ralph was faced by troops under the Duke of Burgundy, who was apparently a Dolphin. 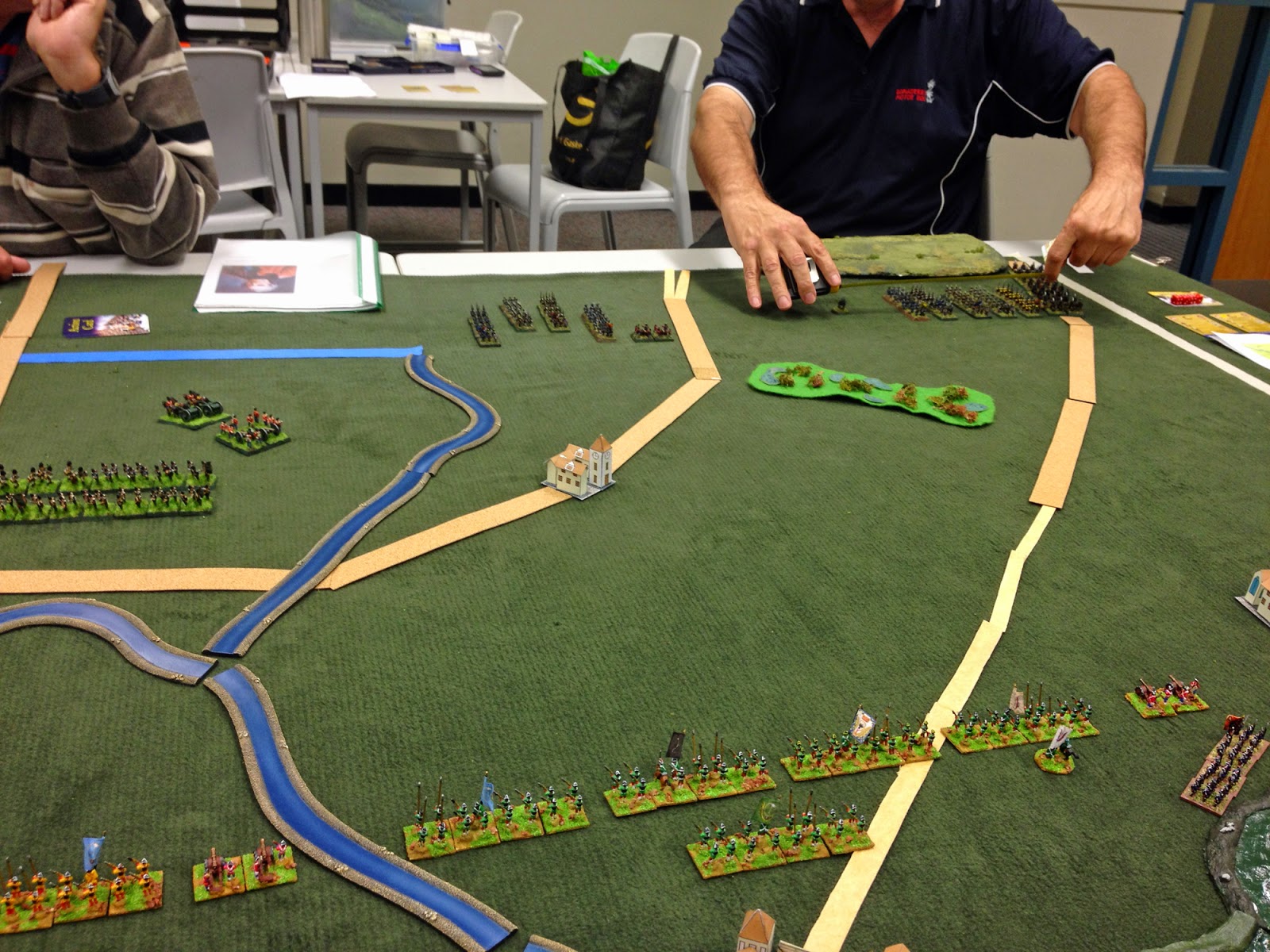 This is Eyne. It was the objective. Ralph garrisoned it. They spent the battle reading the paper and drinking tea. 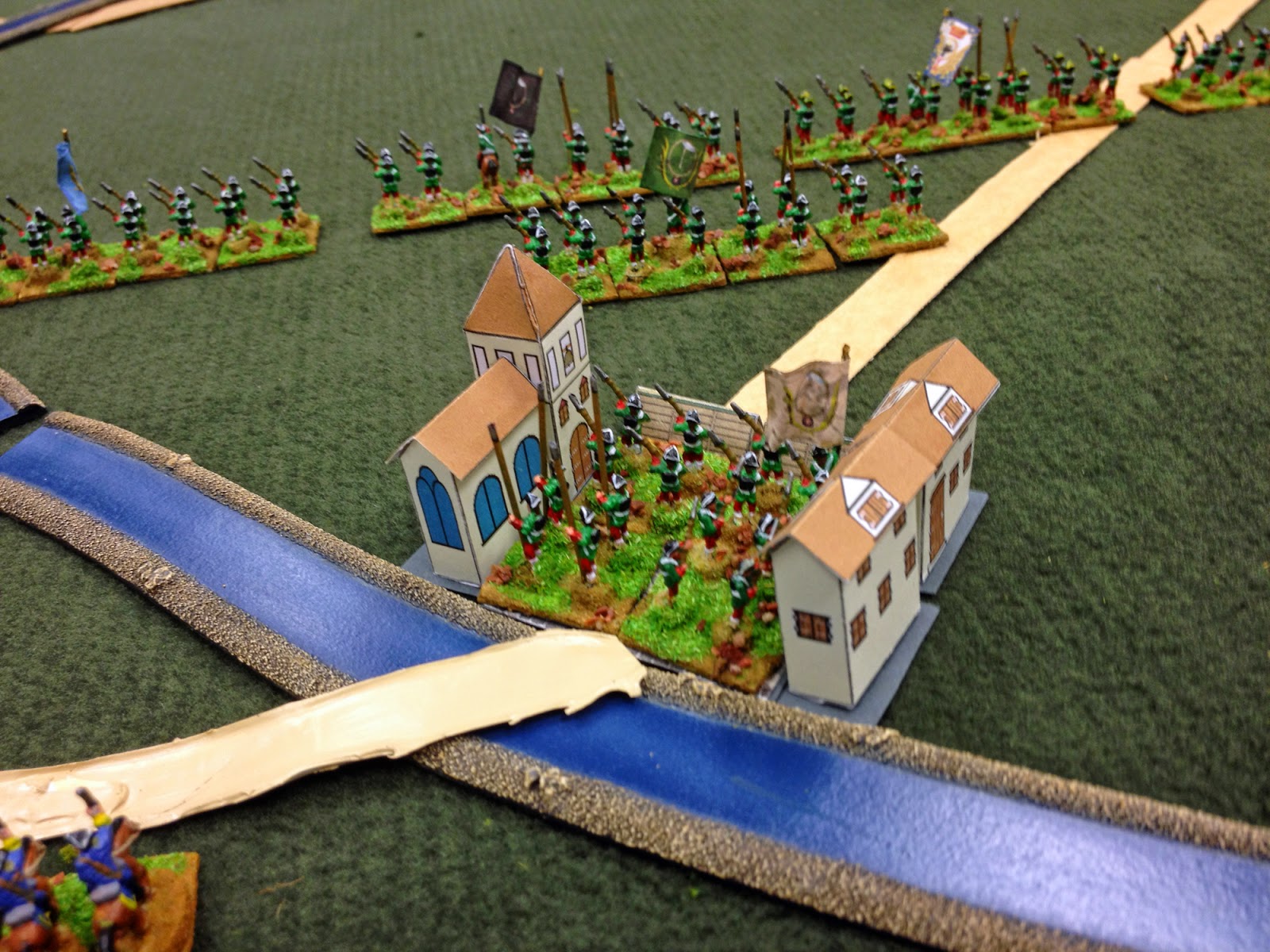 As seems to be the norm with our Maurice games these days, John swung infantry around my left flank. Elite infantry. Don't worry, I thought, my Lethal Volleys will deal with them. 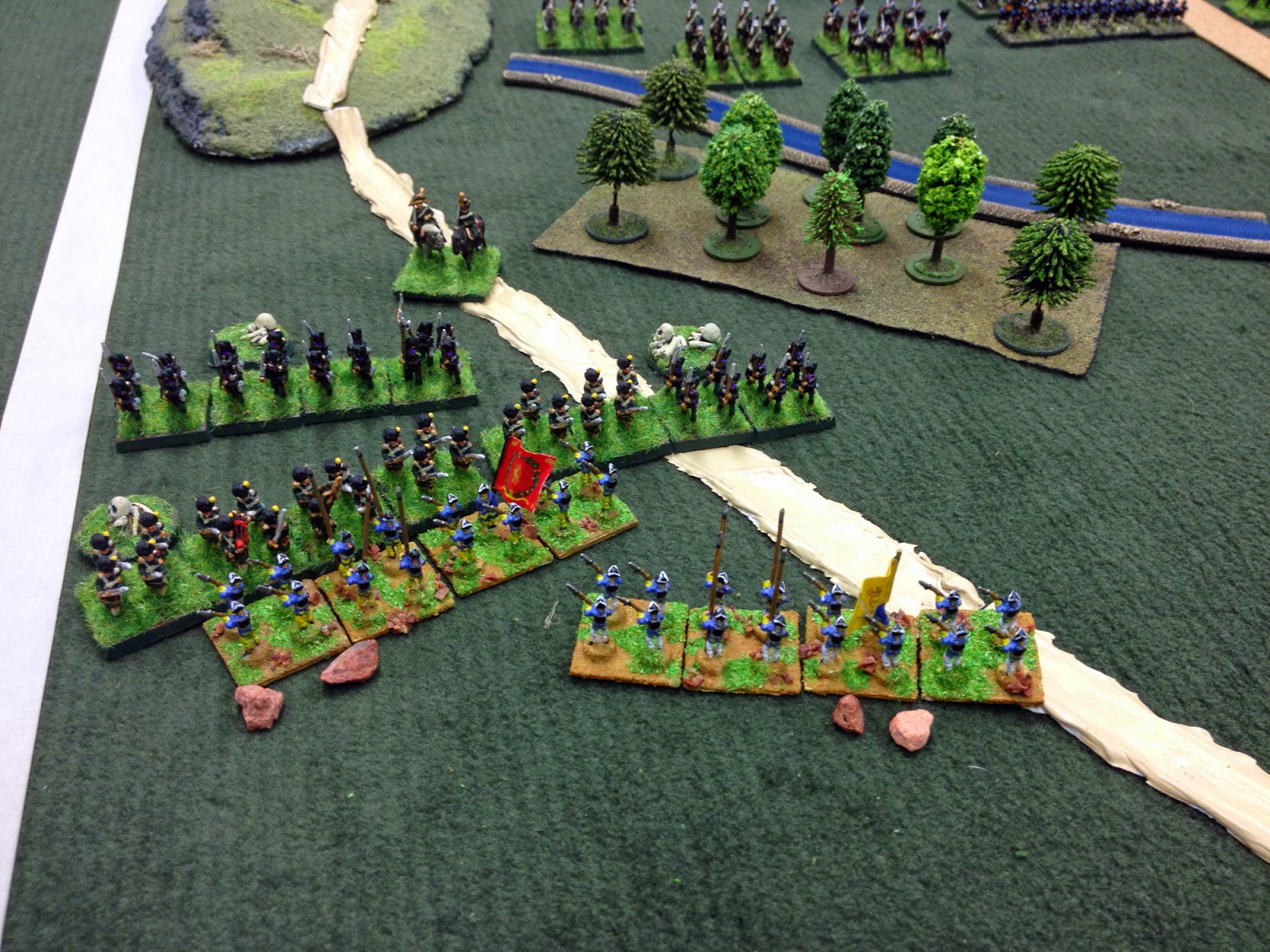 Gary set French troops around the other flank. Ralph garrisoned another town. 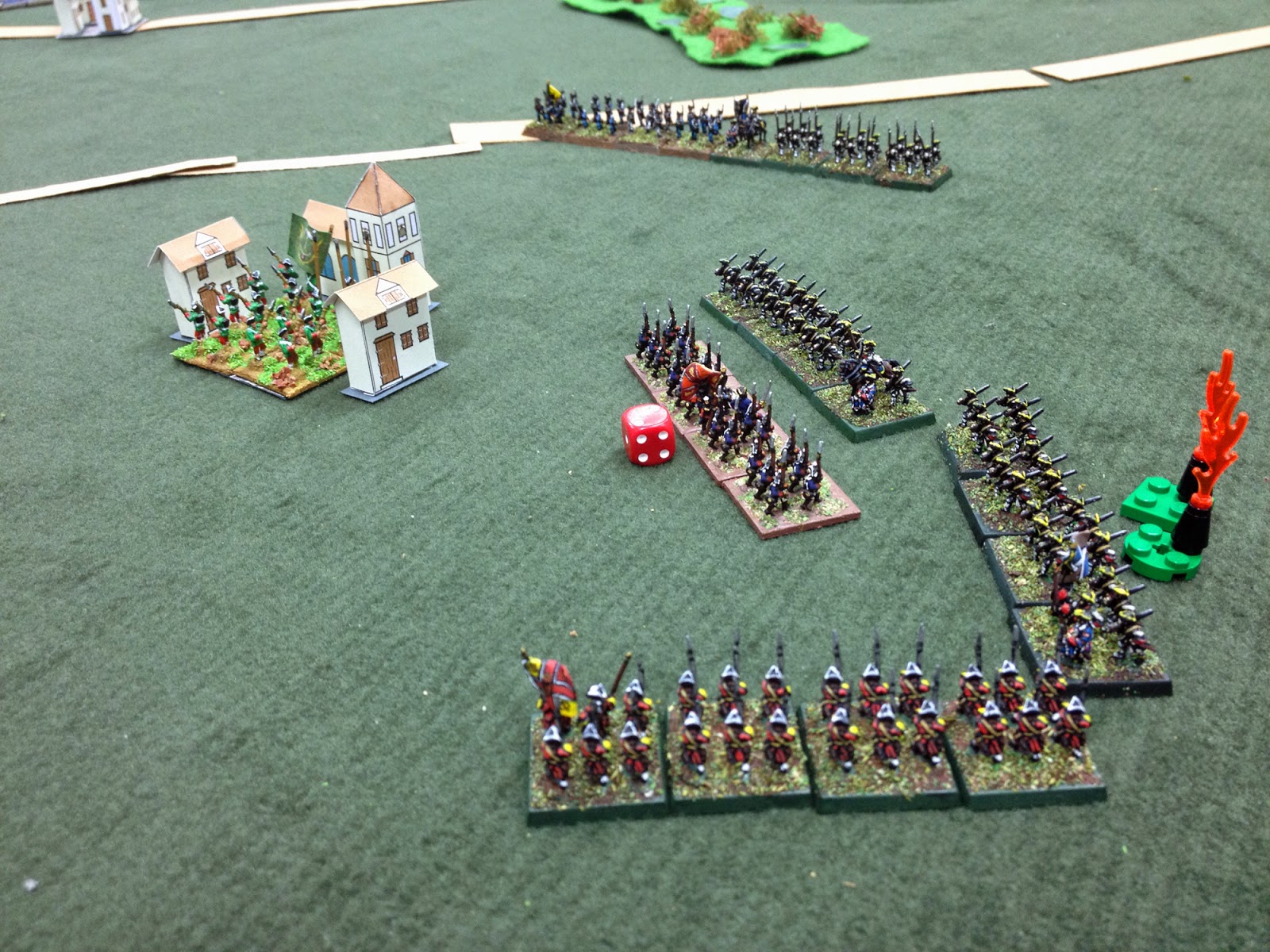 The infantry I sent to deal with John's flank march fled after being charged, but John's elite French infantry was looking shaky. So I sent i the cavalry. The cavalry didn't immediately die, so I can basically class that as a win. In fact after destroying one unit I was able to withdraw both units to safety; I had a stab at a second shaky unit, but John unsportingly played an event card to rally it before I could charge. 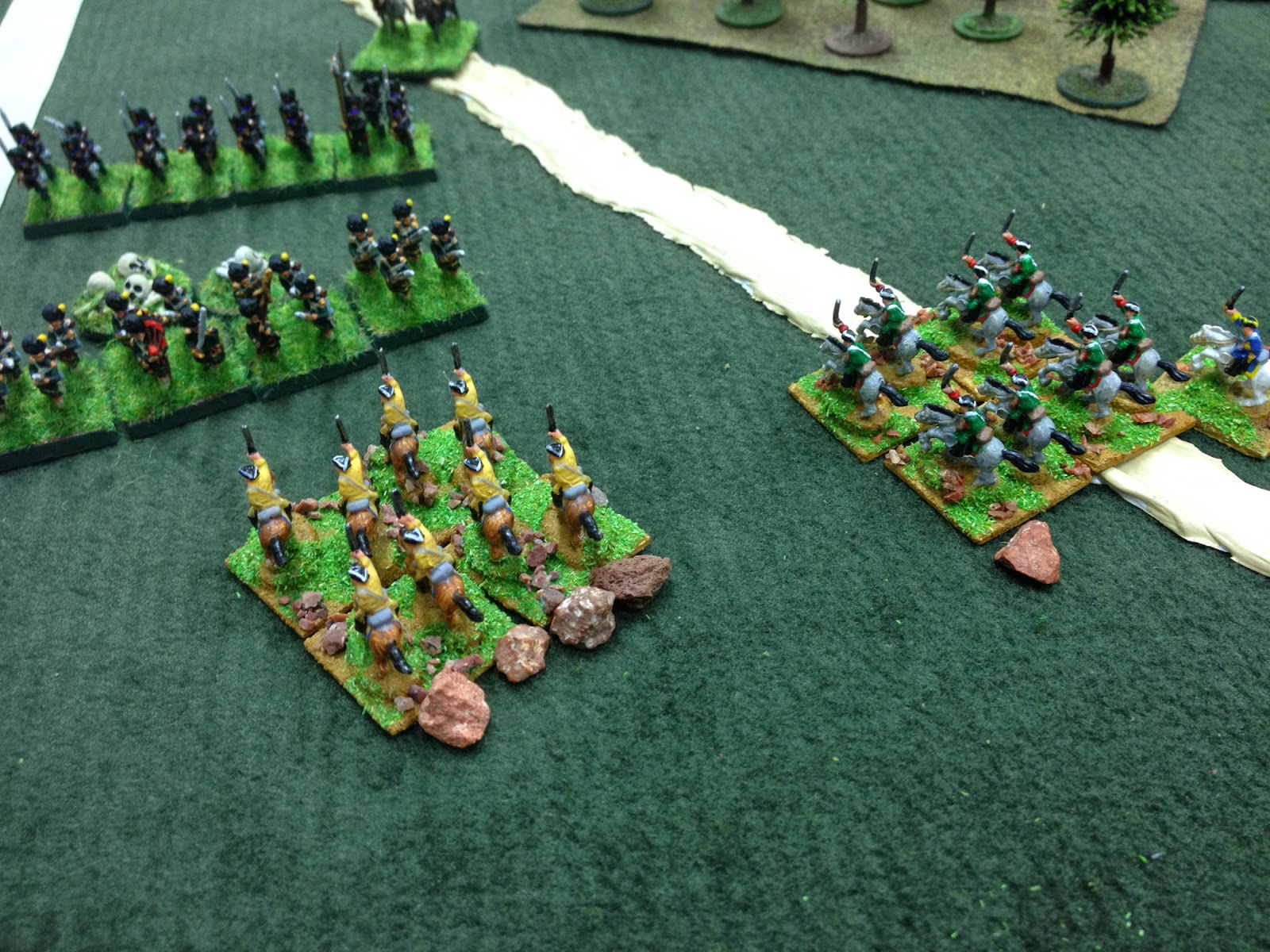 Gary was looking very strong on our right, with only a couple of Allied units facing them 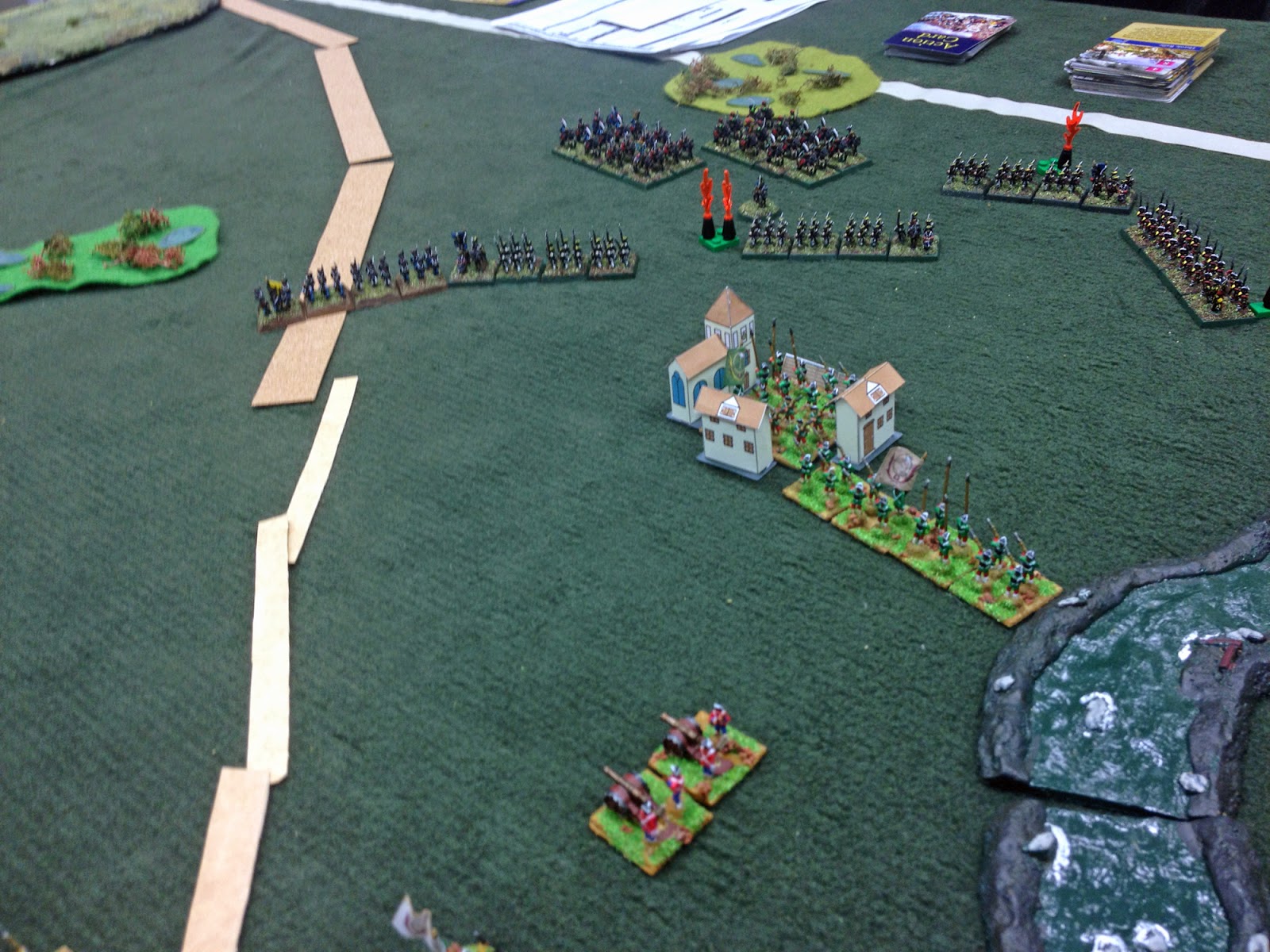 An overview of the battle. Both Allied flanks are in trouble and troops are being moved to counter the threats. 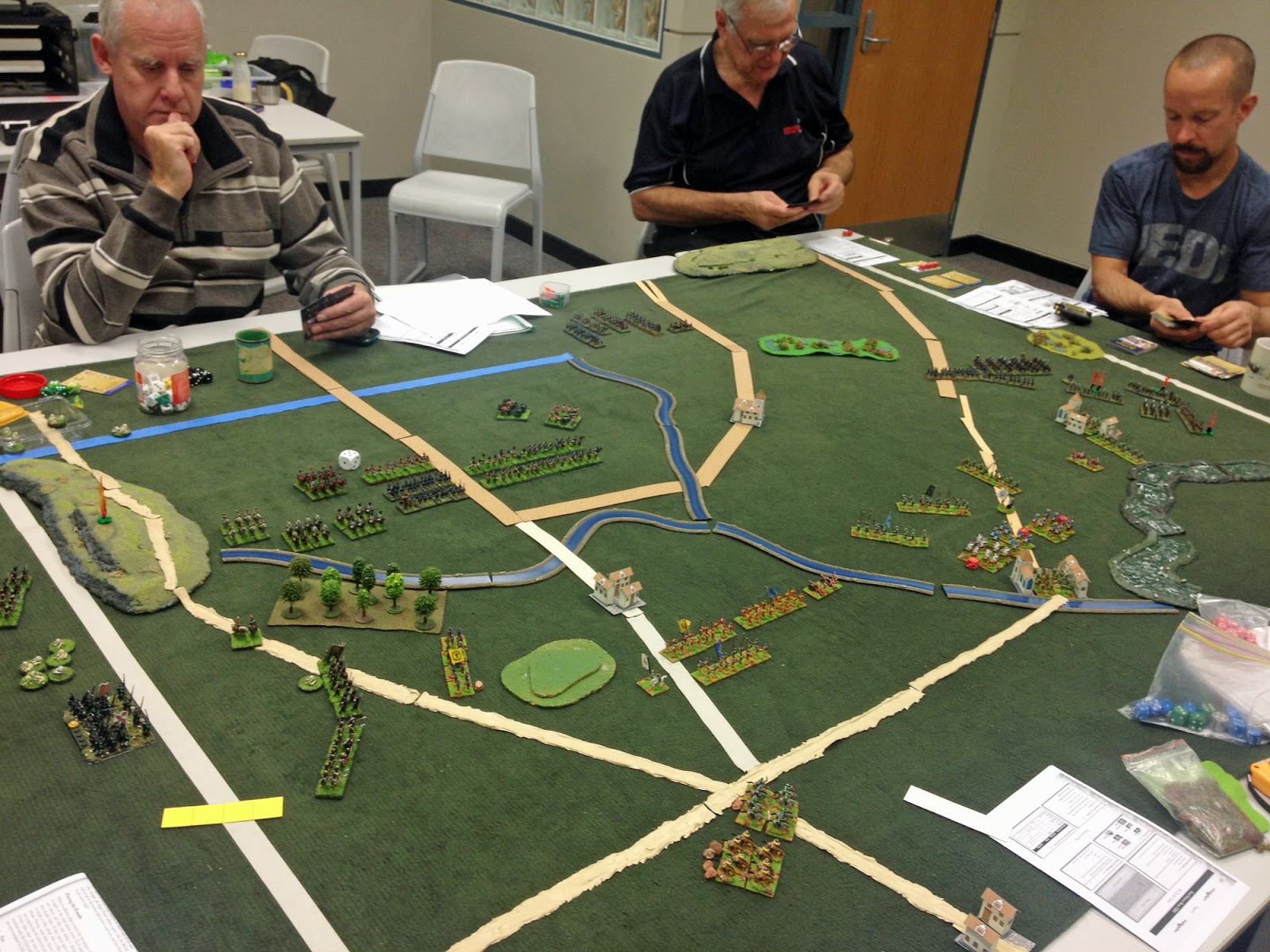 On my part of the table I shifted most of my force over to counter the elite French infantry threatening my flank. I hoped I could eliminate them quickly before the rest of the army advanced, crossed the river and wiped me out. 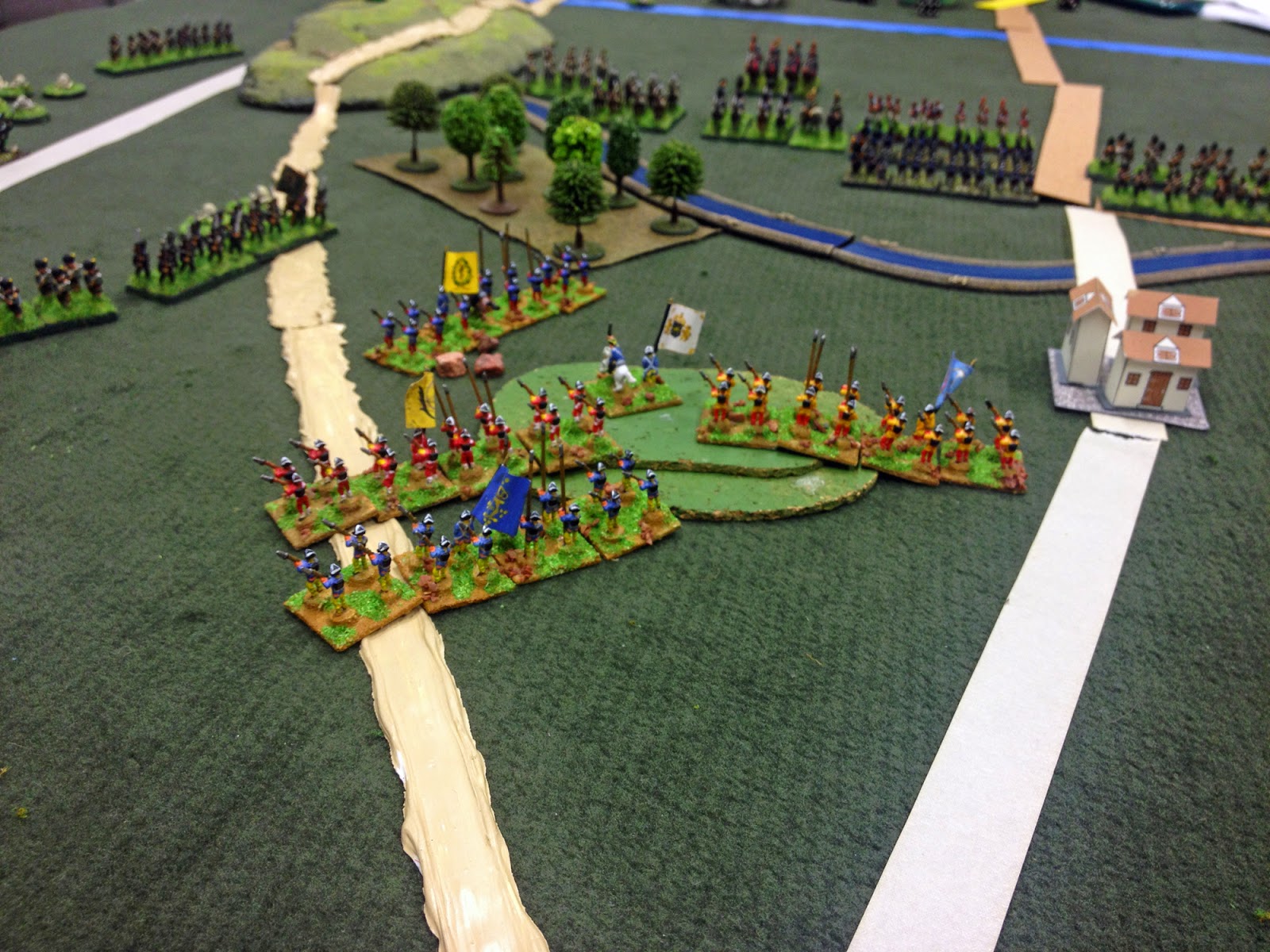 I was wrong. Rubbish die-rolling on my part meant that my Lethal Volleys were less than lethal, and the French infantry wouldn't go away. By the time we called it a night the French were advancing everywhere, the Allied reinforcements still hadn't turned up and what troops we did have were scattered and looking a bit sorry for themselves.

A French victory. Now there's words you don't see very often. But, let's face it, as Eugene and Marlborough our tactics left a bit to be desired since we managed to get horribly outflanked in both directions. To be fair to Ralph he got less horribly outflanked than I did, but only because the French on his side of the table had further to march in order to do it and gave him more warning.

Thanks to Caesar for the scenario and Ralph for the early terrain setup.
Posted by Kaptain Kobold at 19:39