The third scenario in One-Hour Wargames is the first one to feature terrain other than hills - we get a river and a wood. The aim is to control both fords at the end of the game.

I used my 9" board and terrain again, as well as my 6mm Liberation armies. But this time I switched rules to my own Liberated Hordes HOTT variant. This can be found on the Free Stuff part of this blog, but at present the version there is very out of date. I'm in the process of writing up the latest version and will post it when it's ready.

I say I used my HOTT variant. What I actually used was a variant of the variant. I thought that it would be interesting to keep the game at six units per side, and that required some adjustments to the game. Firstly I dropped generals; all elements would be in command at all times. On the downside you can't attach a general to boost morale in combat. In addition I dropped the PIPs to 1D3. With six units it should be possible to keep the army in three or fewer groups, and once the army breaks up you should be forced into decisions as to how to reorganise.

I used 1" to 100p, which seems to work OK even with the 1" frontage elements. As I've stated elsewhere it's basically applying the DBA 3.0 dynamic to HOTT. On a small board it made for very rapid movements, but the OHW rules allow for some pretty swift moves as well, and that doesn't have a PIP system limiting whether units can move at all.

In addition I stuck to the OHW rules on breakpoints - there aren't any. An army would fight until time ran out or it lost all of its elements. I also didn't apply any troop quality.

So, once again Bolivar's Republicans faced a local Royalist commander, with control of a river at stake.

I had each army deploy along the board edge at the point and in the groups they would enter by. Some groups would not necessarily enter on the first turn, depending on how much the army was split up and how many PIPs you got. 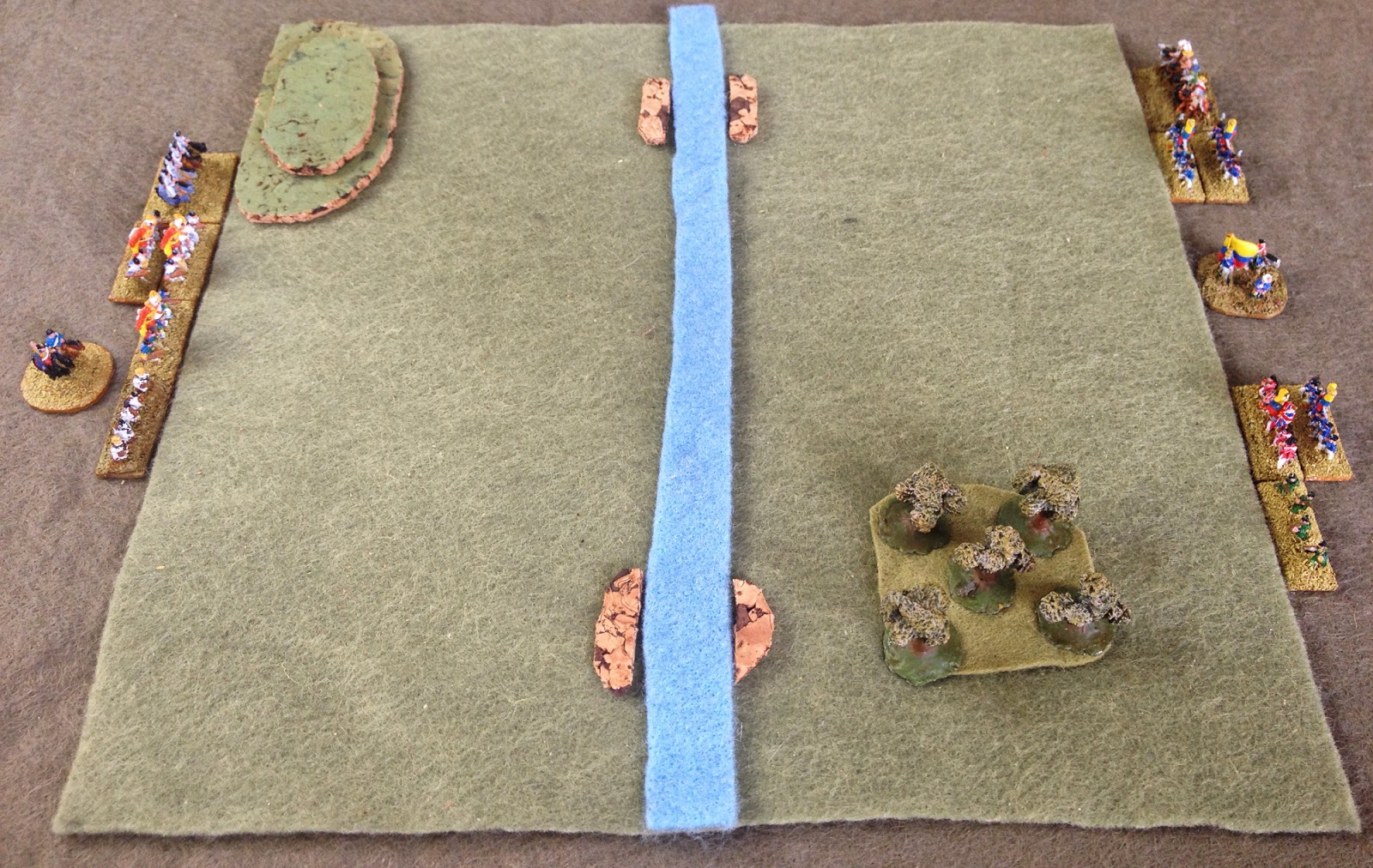 You'll notice I put generals on the table; they are just garnish. 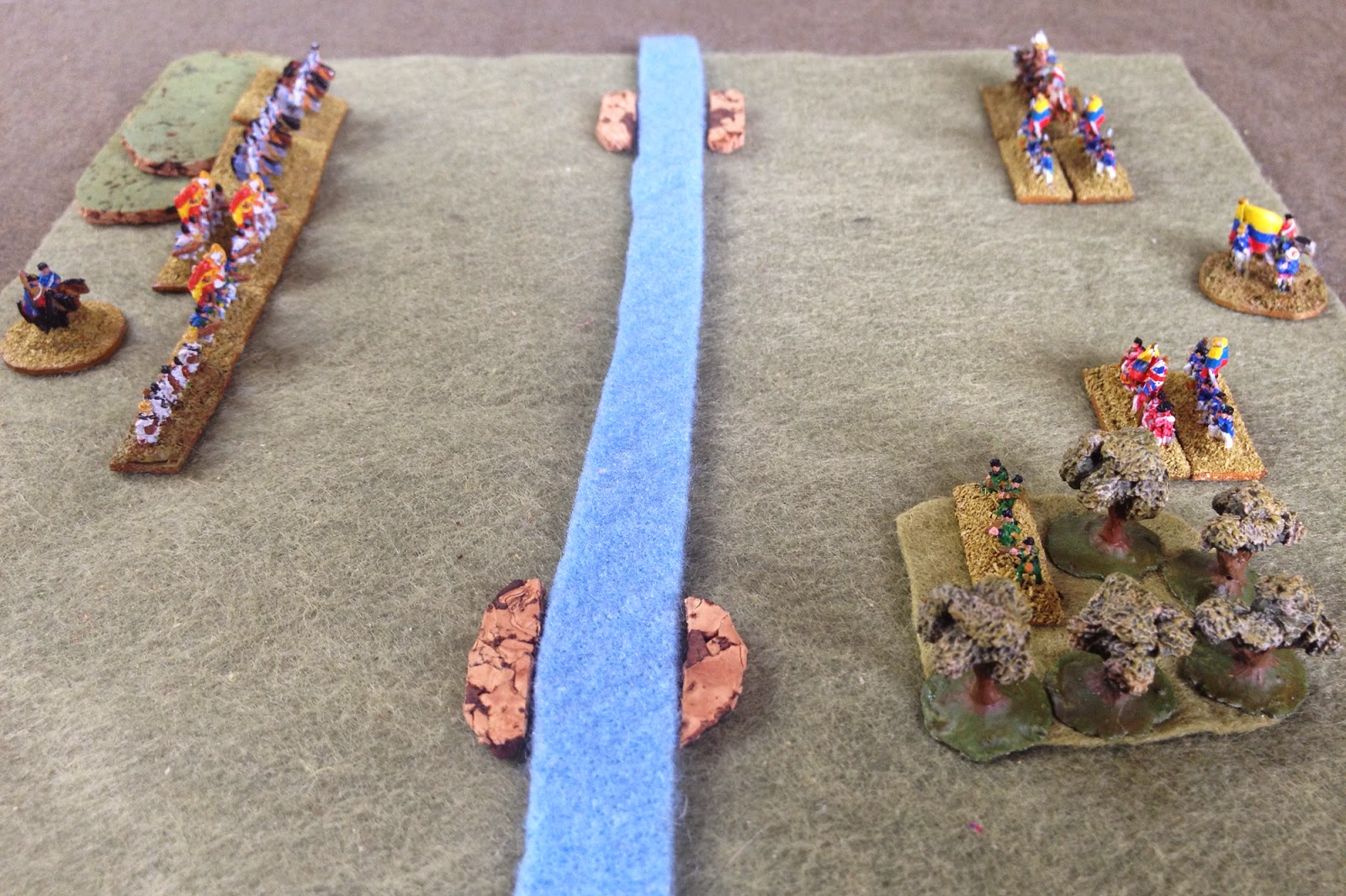 The Royalist cavalry pushed across a ford and attacked the Republican llaneros on the other side. I treated the river as being impassable except for the fords, but treated them as road fords, which in HOTT do not give a defensive bonus; I felt that the overlaps you could get from a good defensive setup would be advantage enough. 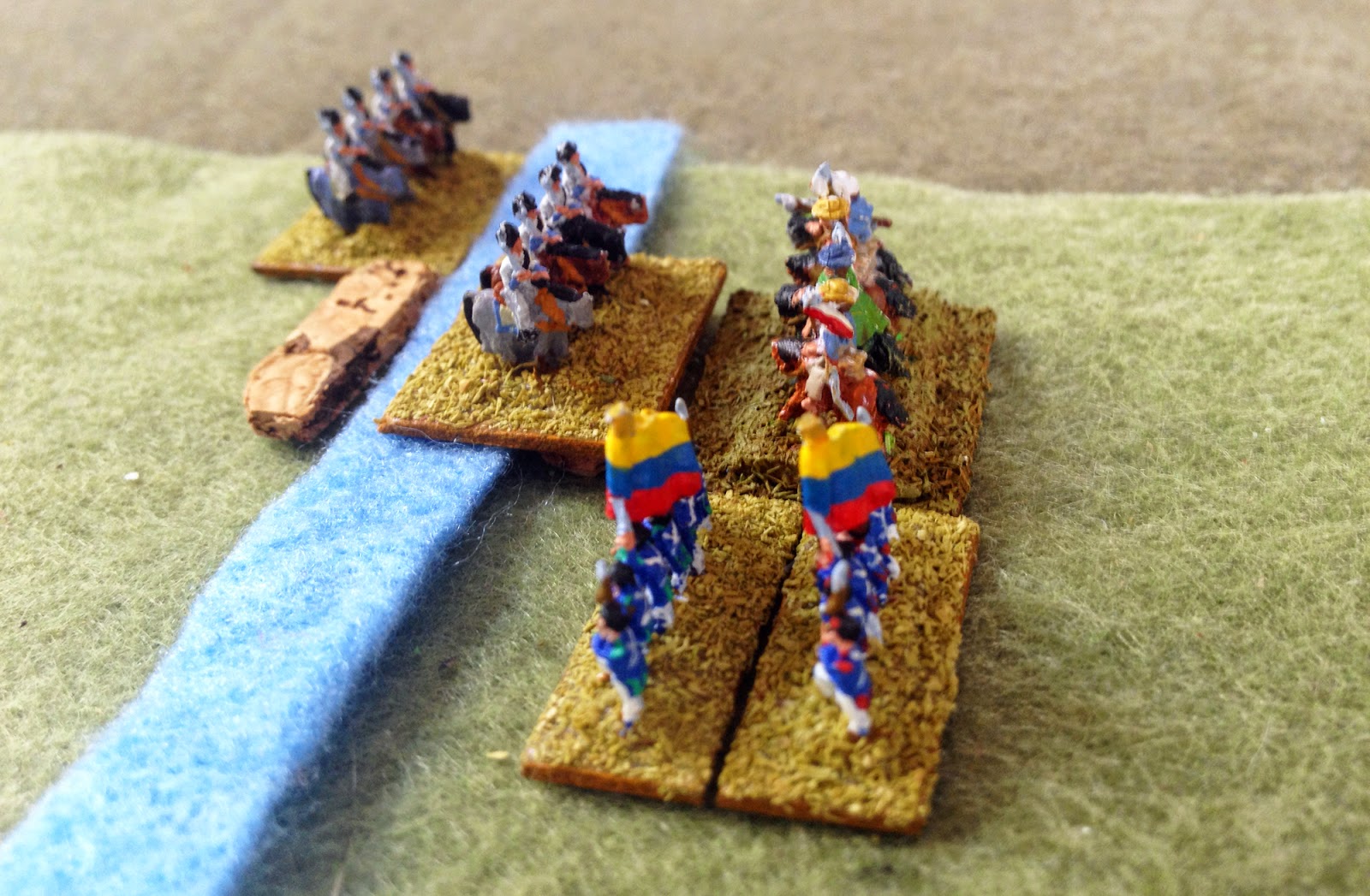 The cavalry lost, but the Republicans pursued, and a to and fro fight developed. The Republican infantry supported the fight with musketry to which the Royalists had no reply. 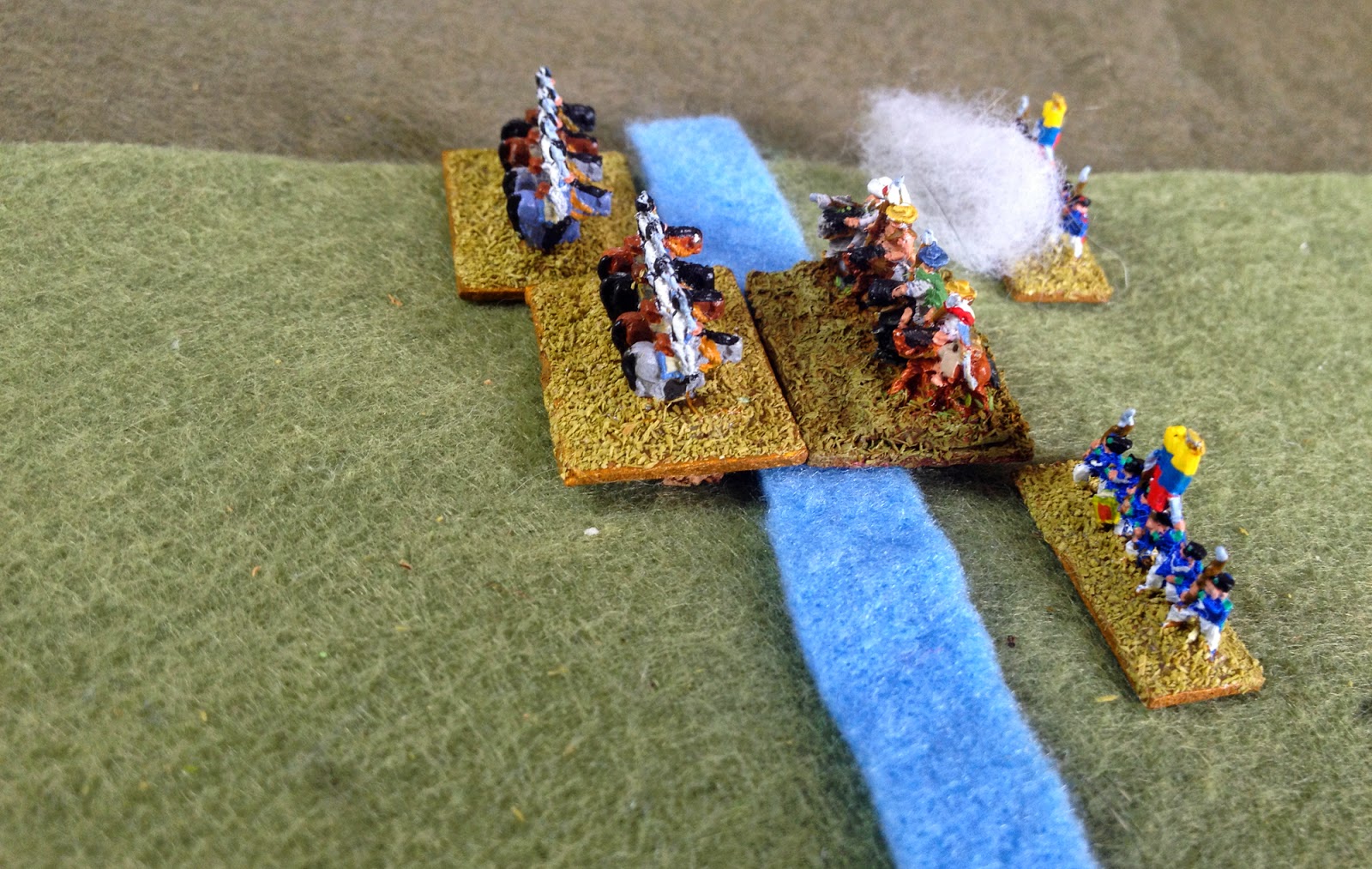 Royalist infantry moved up to support their cavalry. 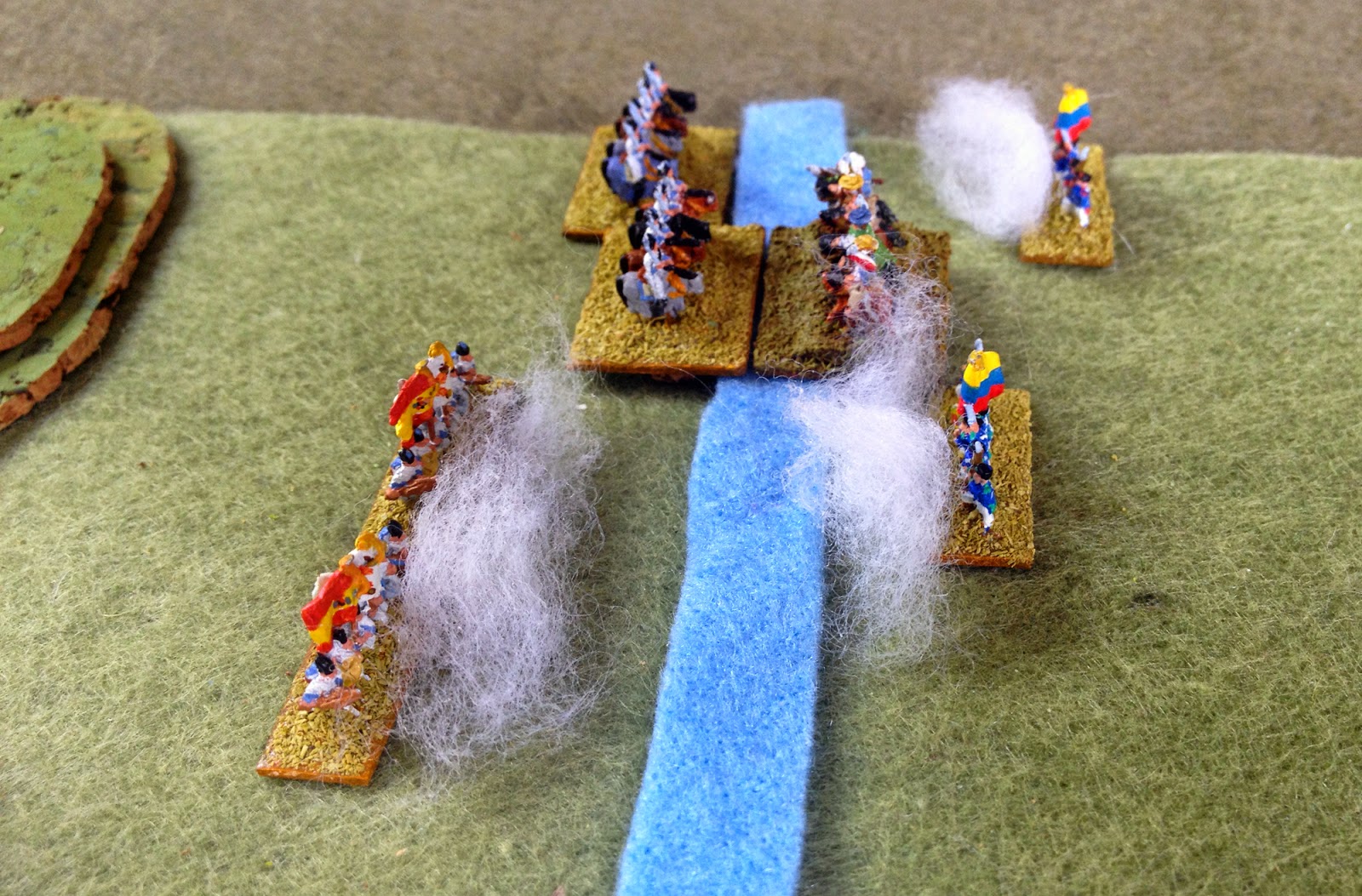 One of their cavalry units routed, but the other finally managed to push all of the way across the ford. Unfortunately this left it somewhat isolated ... 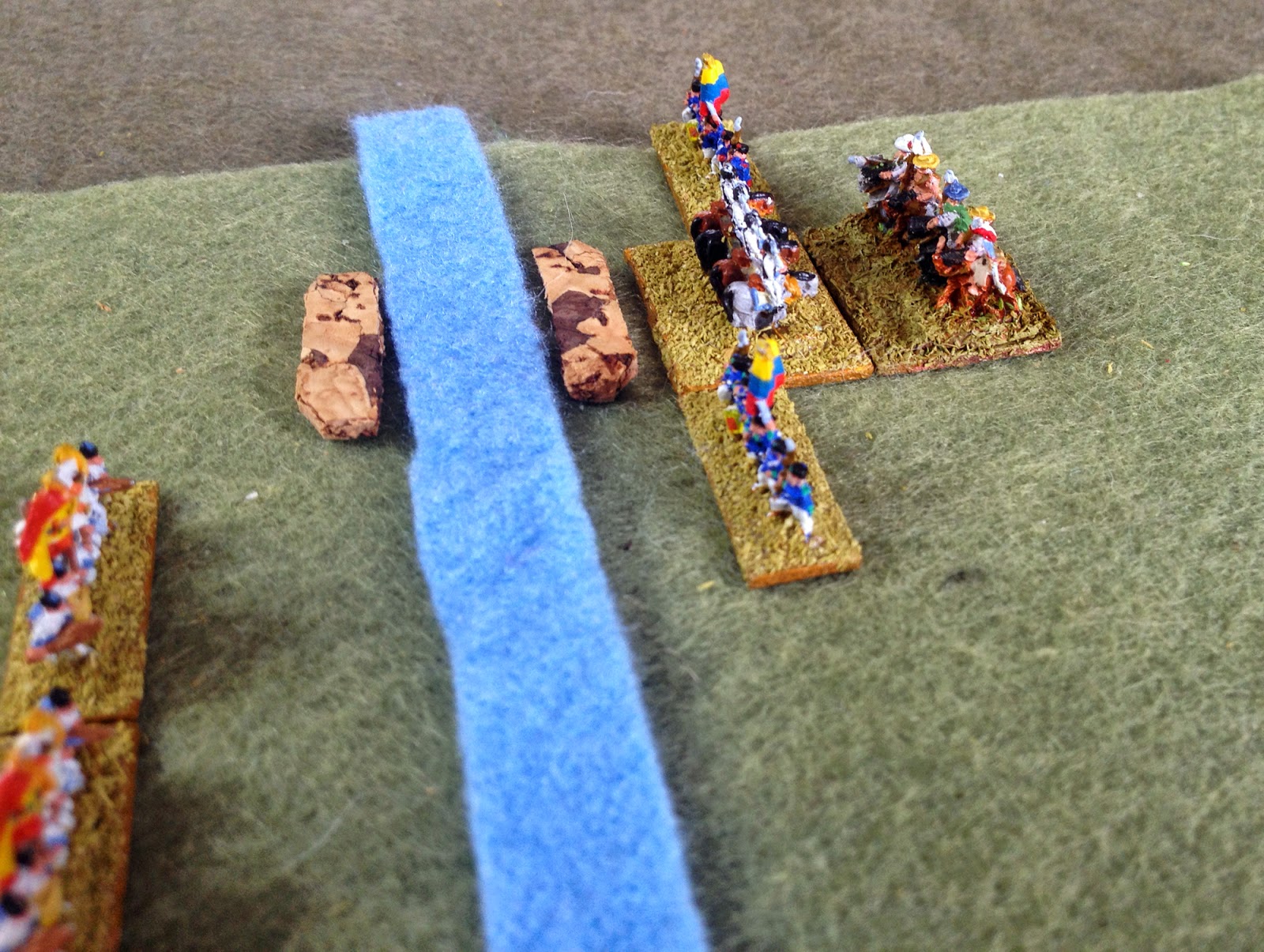 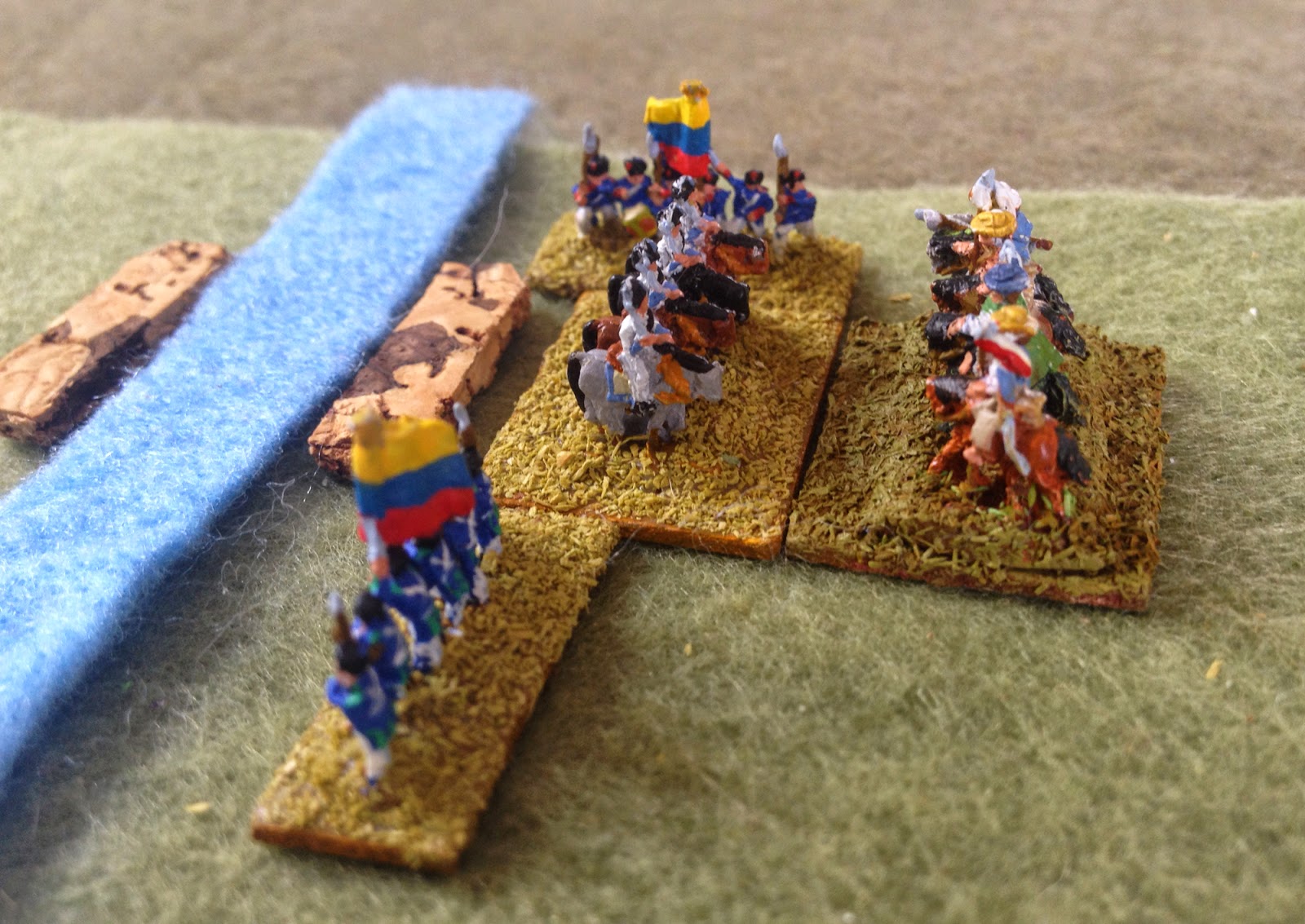 Meanwhile on near the other ford the two side's infantry were exchanging shots. The British Legion took one volley and fled. 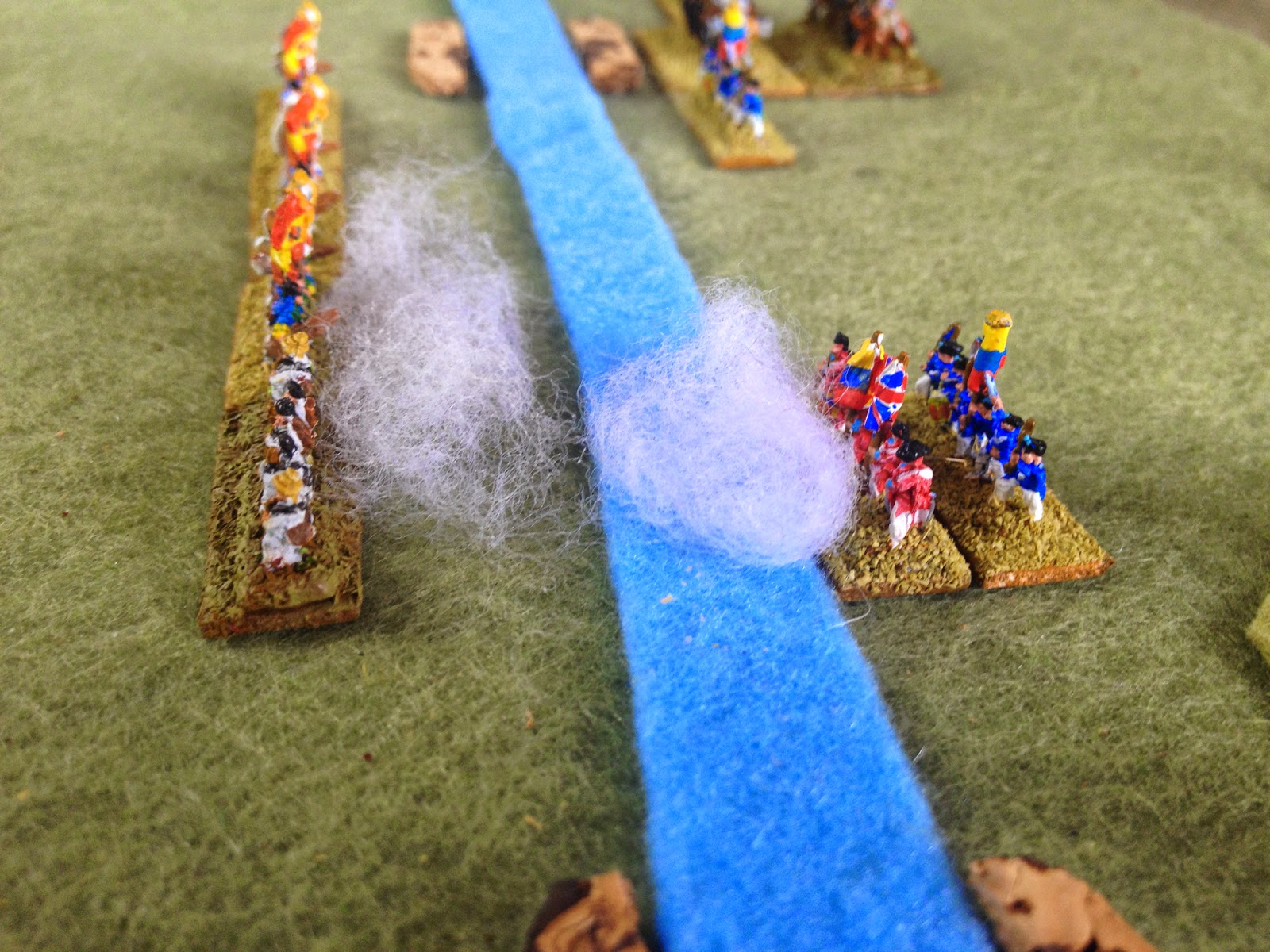 An overview of the battle after four or five turns shows the Royalists with a strong infantry centre uncommitted to either ford, whilst a firefight rages at the furthest ford. Near the woods the Republicans are beginning to cross the river uncontested. 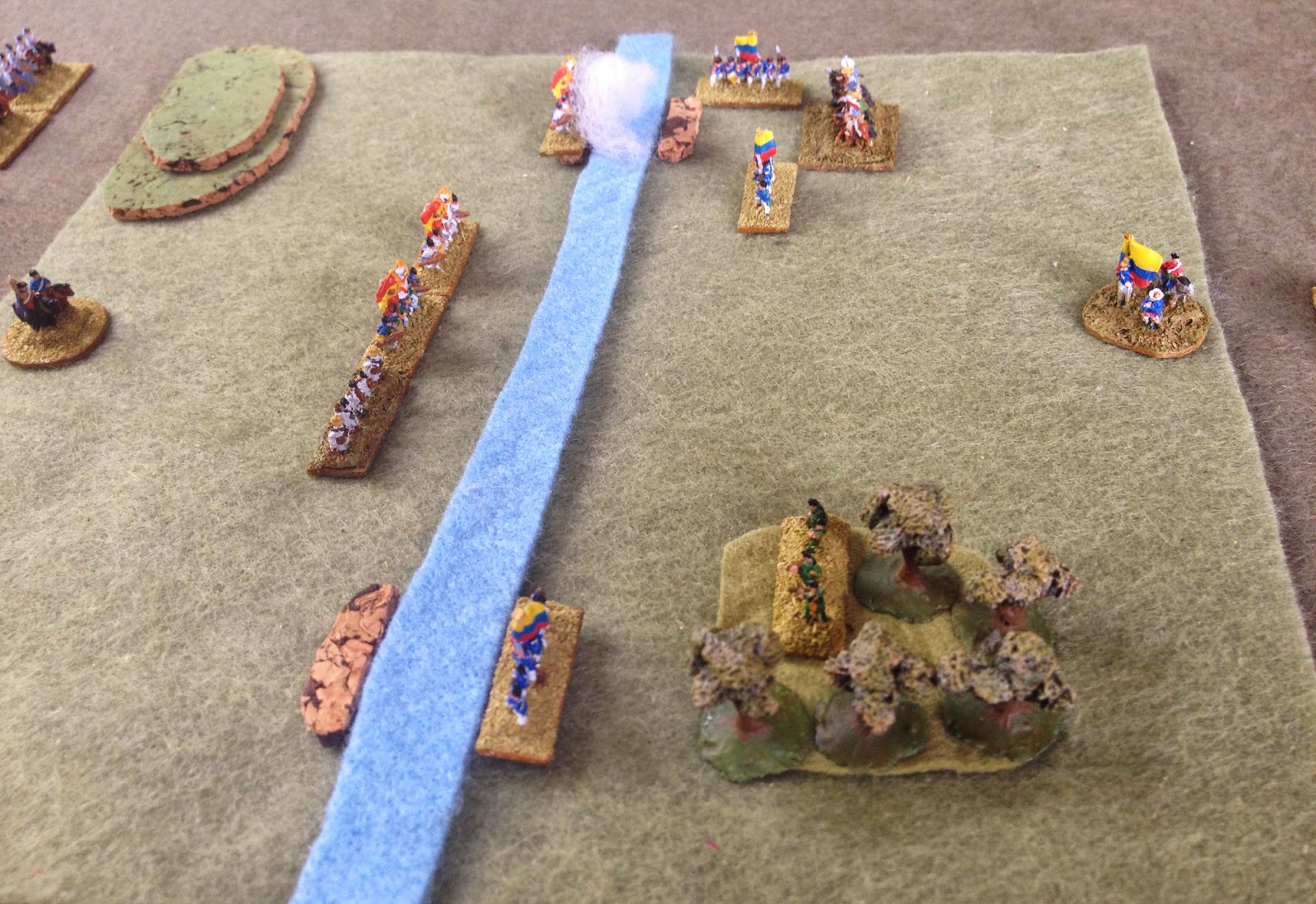 Republican infantry crossed the river and turned onto the Royalist right flank. This was held by skirmishers which in Liberated Hordes are a little tougher than those in OHW, but not by much. 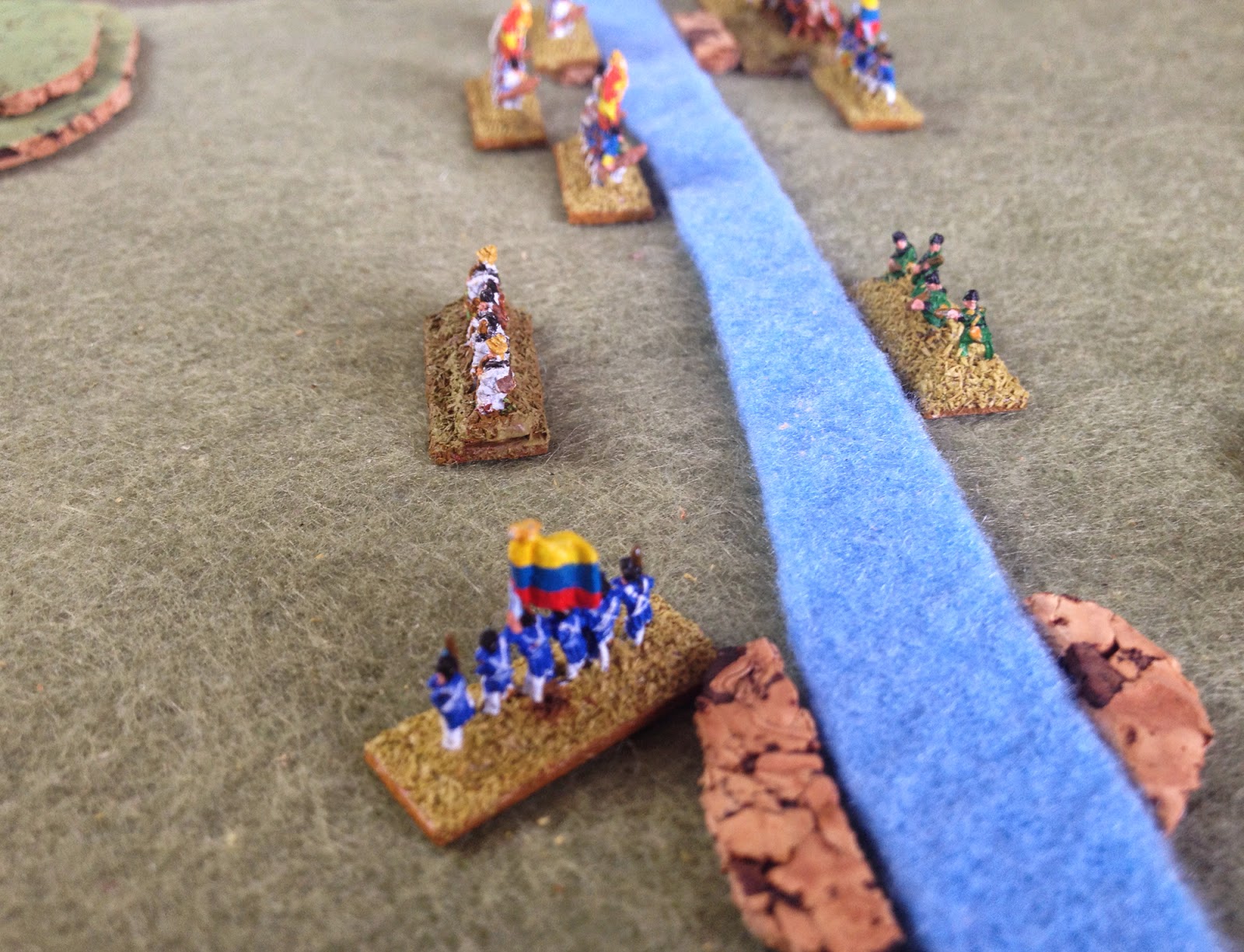 In the distance the Republican cavalry attacked across the ford ... 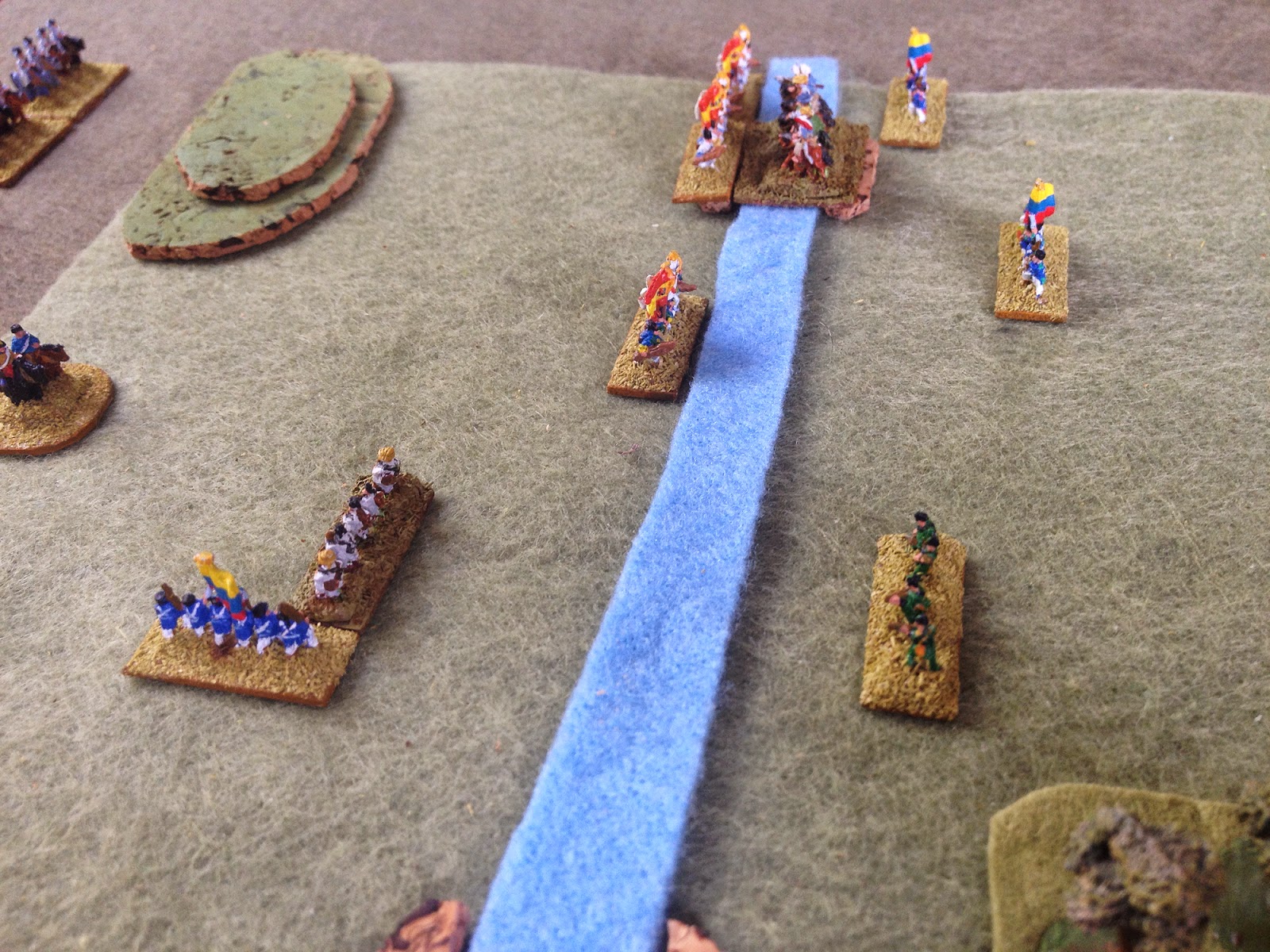 ... whilst the Royalist skirmishers fled. 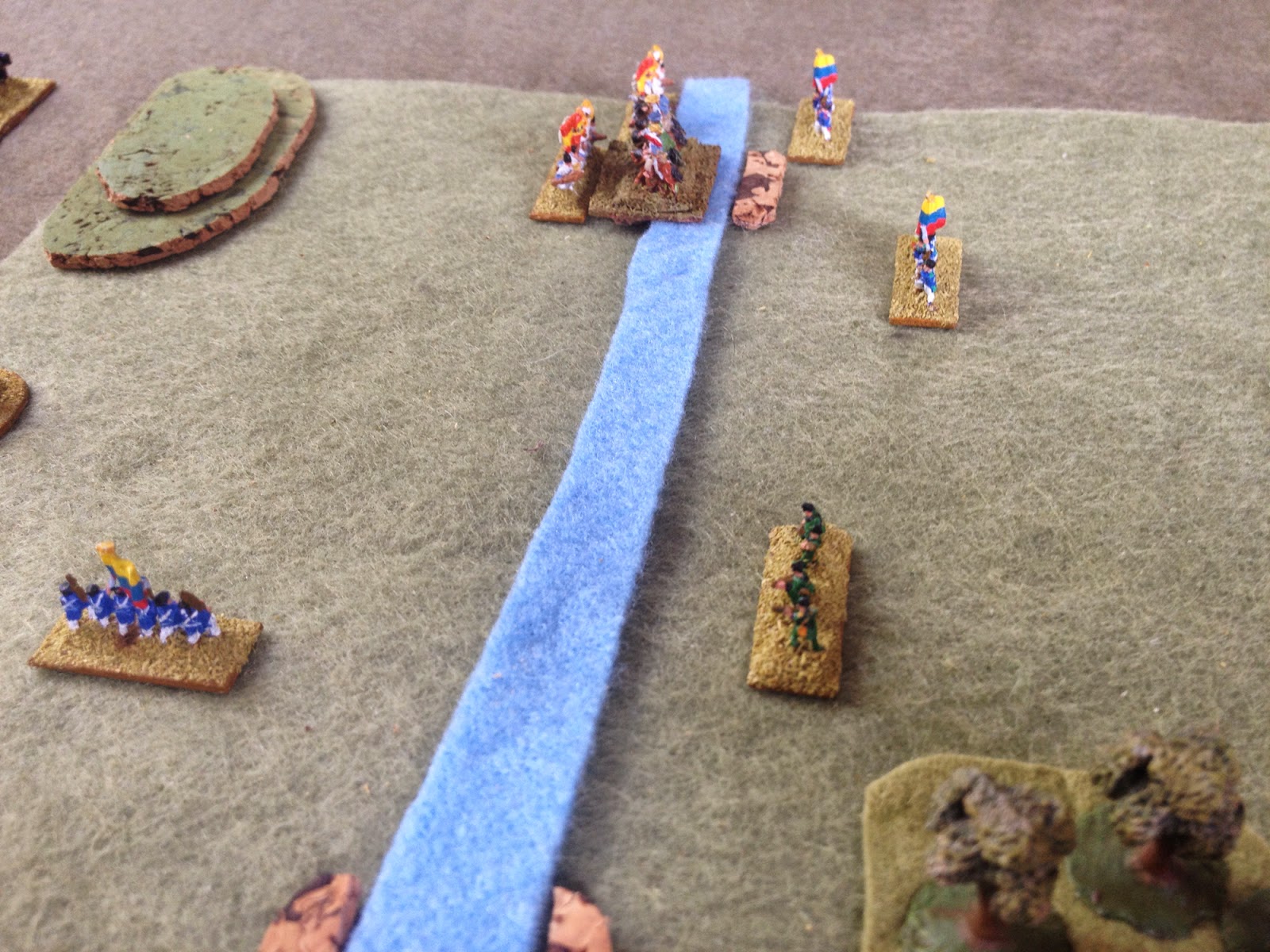 The Royalists were now down to the two infantry units at the ford. One was flanked by infantry and destroyed by another cavalry charge. 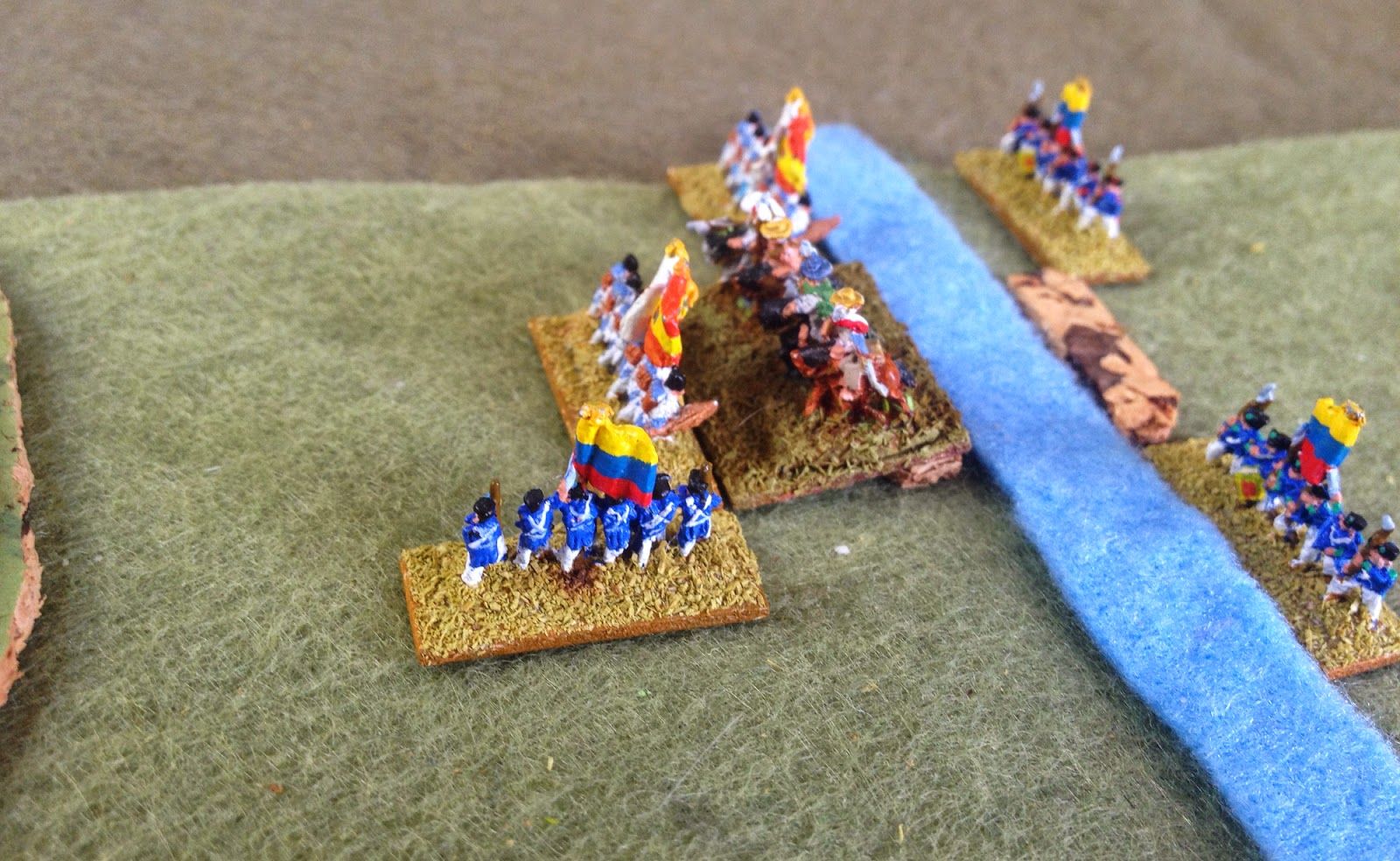 The other faced a couple of volleys from across the river, and it too broke. 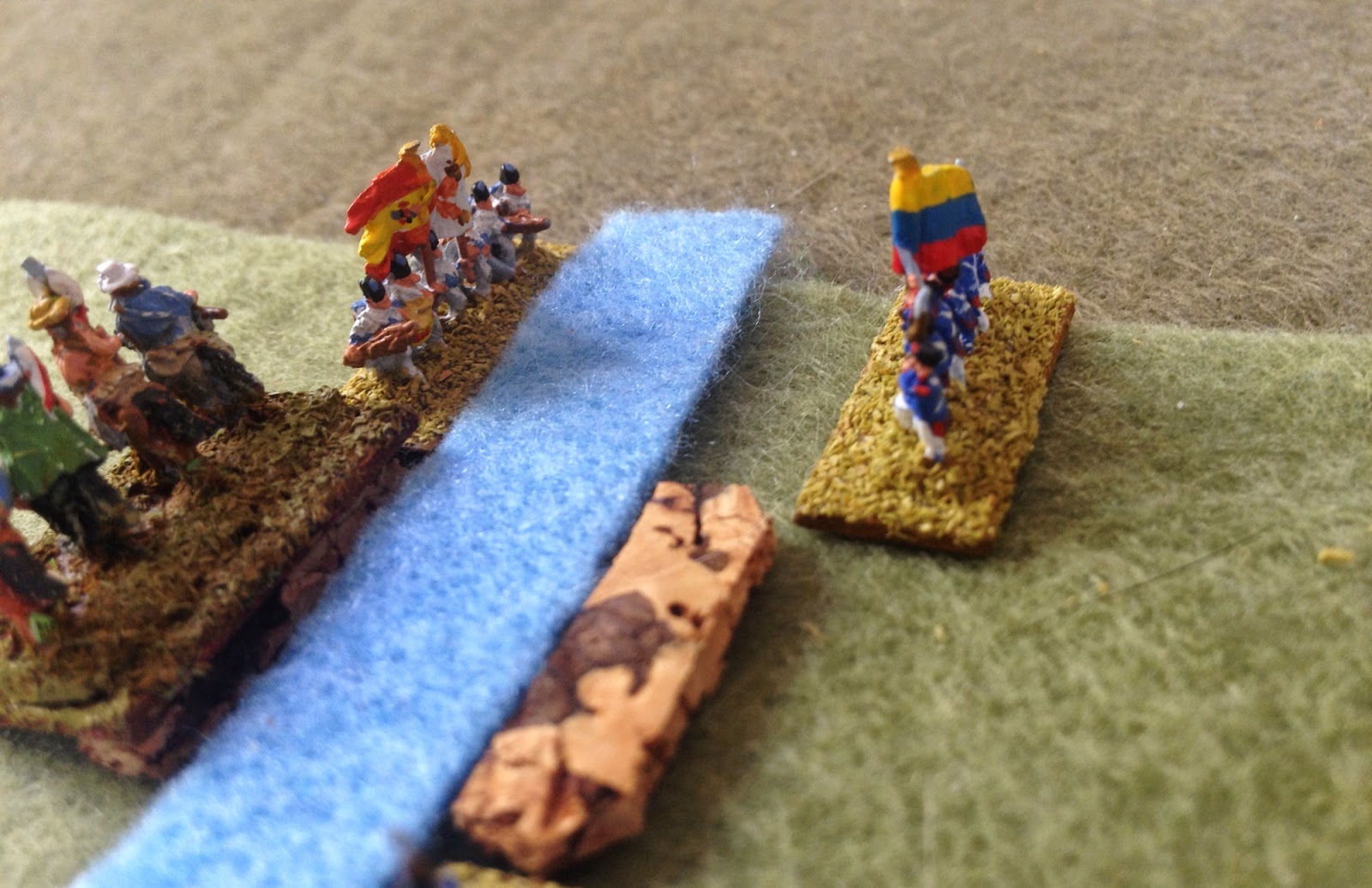 The end. Ten turns into the game and the Republicans have total control of the field. 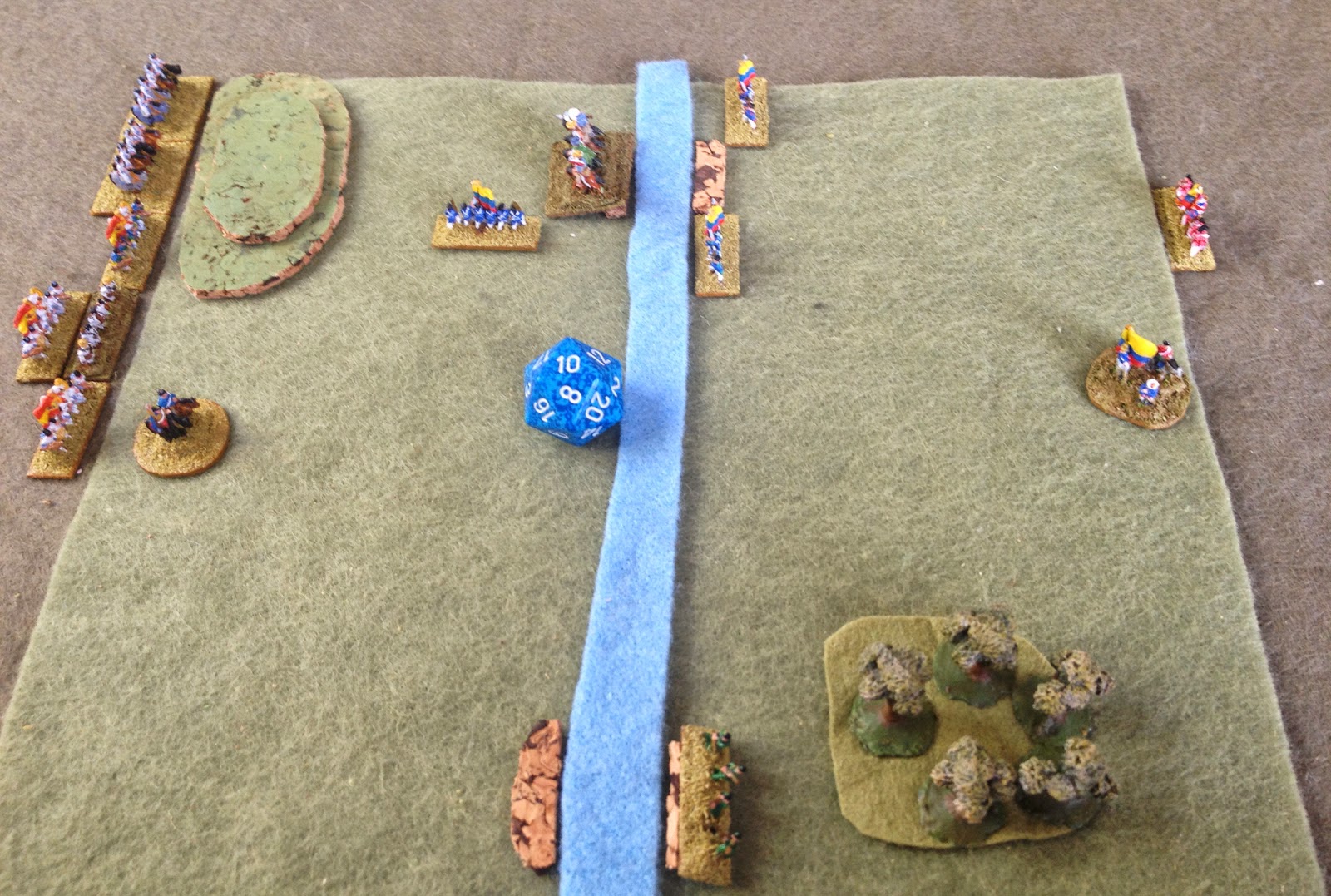 I quite enjoyed how this game played out. Unlike the OHW rules, and variants I've tried, the combat is not attritional, so a unit can fight for turn after turn with no ill effects only to suddenly disappear due to a poor roll. But the rate at which the losing army collapsed seemed to be about the same as that in the OHW rules. And there's no marking of casualties of course. The PIP system forces decisions about where to attack or improve your position, and encourages armies to stick together for support. How this will work with some of the other scenarios remains to be seen.