The second scenario in One-Hour Wargames is another straight head-to-head fight. This time, however, there are a couple of objectives at stake - a hill in one corner and a crossroads in the other. 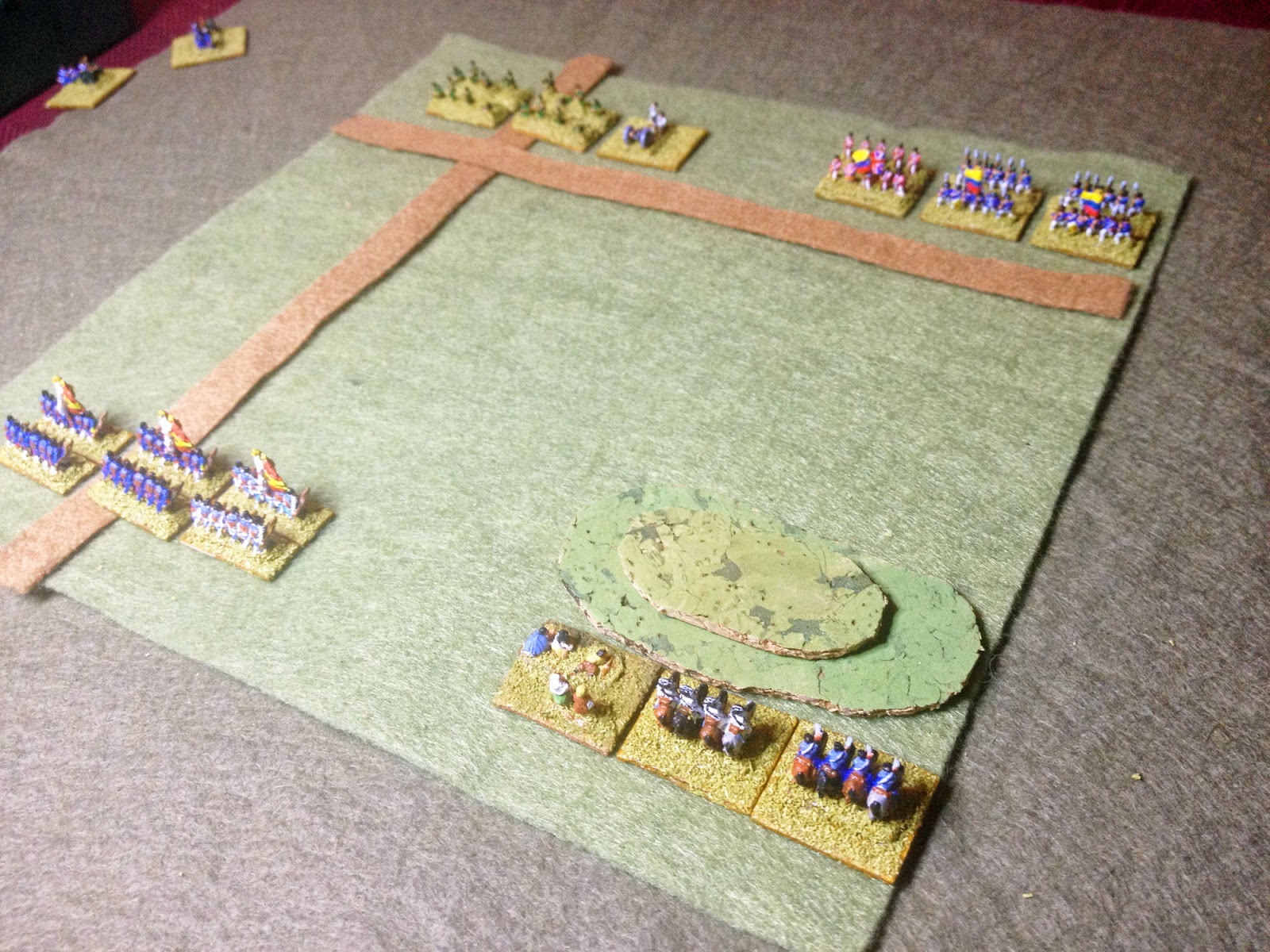 Once again I used Bolivar's Republicans against the Royalists. And, once again, I used the  One-Hour Wargames Horse & Musket rules.

First off, I used a modified version of the combat mechanism I posted yesterday, which I tried out in a couple of games just to make sure it worked.

Each dice which scores a 4+ scores a hit.

Cover and armour save as before - roll 1D6 per hit and a 4+ means it's ignored.

A flank attack means that you double the number of dice you roll.

Units are removed when they have taken FIVE hits.

I think the odds of hitting are better than in the previous version, but units are a little tougher and there's still a reasonable change of inflicting no damage - in the original rules the fact that most attacks will score at least one hit makes them a little to predictable.

In addition I decided to play around with the troops' capabilities a little in order to add a little balance. In all of the nine sets of rules in One-Hour Wargames some troops are basically better than others, or have advantages that aren't always applicable to the scenario. This is probably realistic, in a way, but it does mean that there are some setups generated where you think 'Why bother fighting this at all?'.

So, cavalry are particularly good. They may not be able to gang up on enemy unit like those units that shoot can, but a couple of decent charges can usually see an enemy dealt with and then it's on to the next one. On a fairly open battlefield whoever gets the most cavalry will probably win. So I've reined them back a little.

Change 1 - After a cavalry unit rolls its attack it rolls a D6. On a 1 or 2 it loses its +2 combat bonus for the rest of the game (the horses are blown).

At the other end of the scale we have artillery, which is basically a bit rubbish. It has a good long range, and in some battles that's useful, but it doesn't score much in the way of hits.

Finally, we have skirmishers. Skirmishers are the only unit in the Horse & Musket rules which can enter woods. Half of the scenarios don't have woods. Yes, skirmishers also move faster than infantry. But that doesn't seem to hep them much in most games.

I tried out these changes in some test games, and they seemed OK. So I decided to go for it with my second Scenarios In Order refight.

And what armies did I roll? Well, the Royalists, who moved first, got three infantry, a skirmisher and two cavalry. The Republicans? Three infantry, one artillery and two skirmishers. This did not look good for Bolivar.

In previous goes at this scenario one side has seized the hill and sat on it, forcing the other side to attack. This was an option the Royalists had, but I decided to put the cavalry on that flank, charge over the hill and stop the enemy attack before it could start. meanwhile the infantry would advance on the crossroads, with the cavalry coming in to support them later. The skirmishers would just sit on the hill. The Republican plan was to attack the hill with their infantry whilst trying to delay the attack on the crossroads with the skirmishers and the artillery. 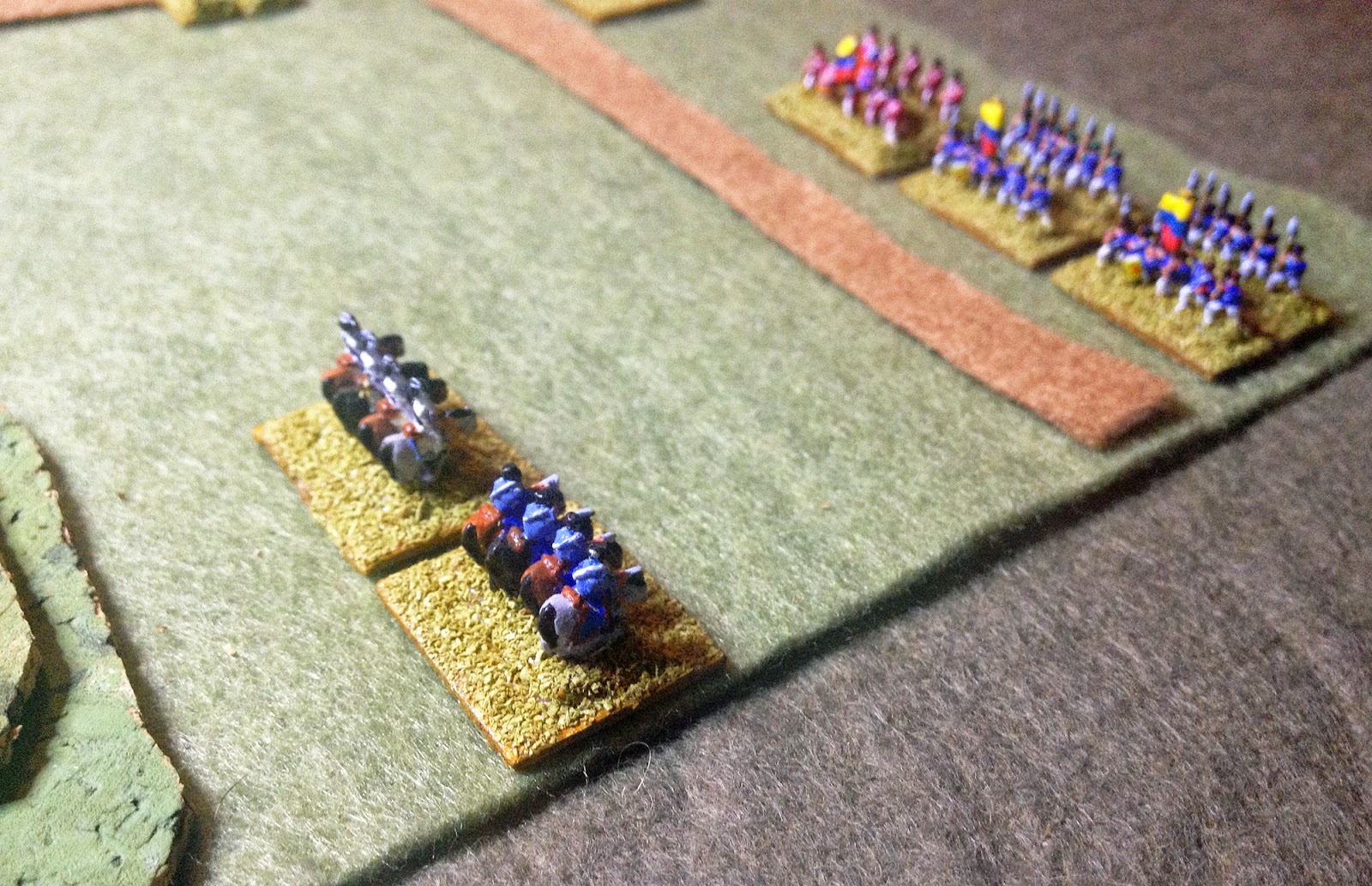 And their infantry advances. 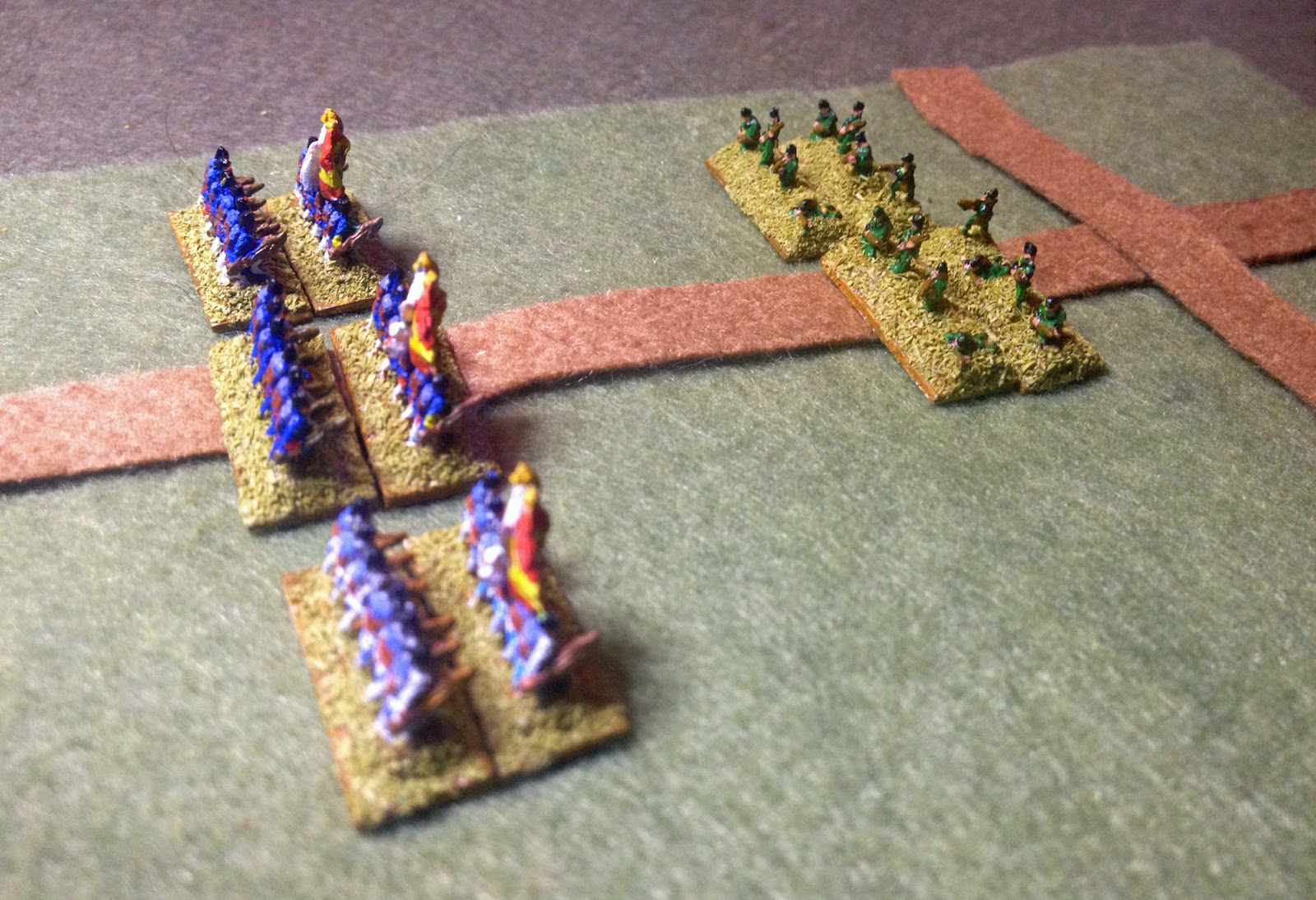 With hindsight it might have been better for the Republicans to have formed square, leaving the unsupported cavalry to go and find prey elsewhere or just sit their looking useless. But they didn't. 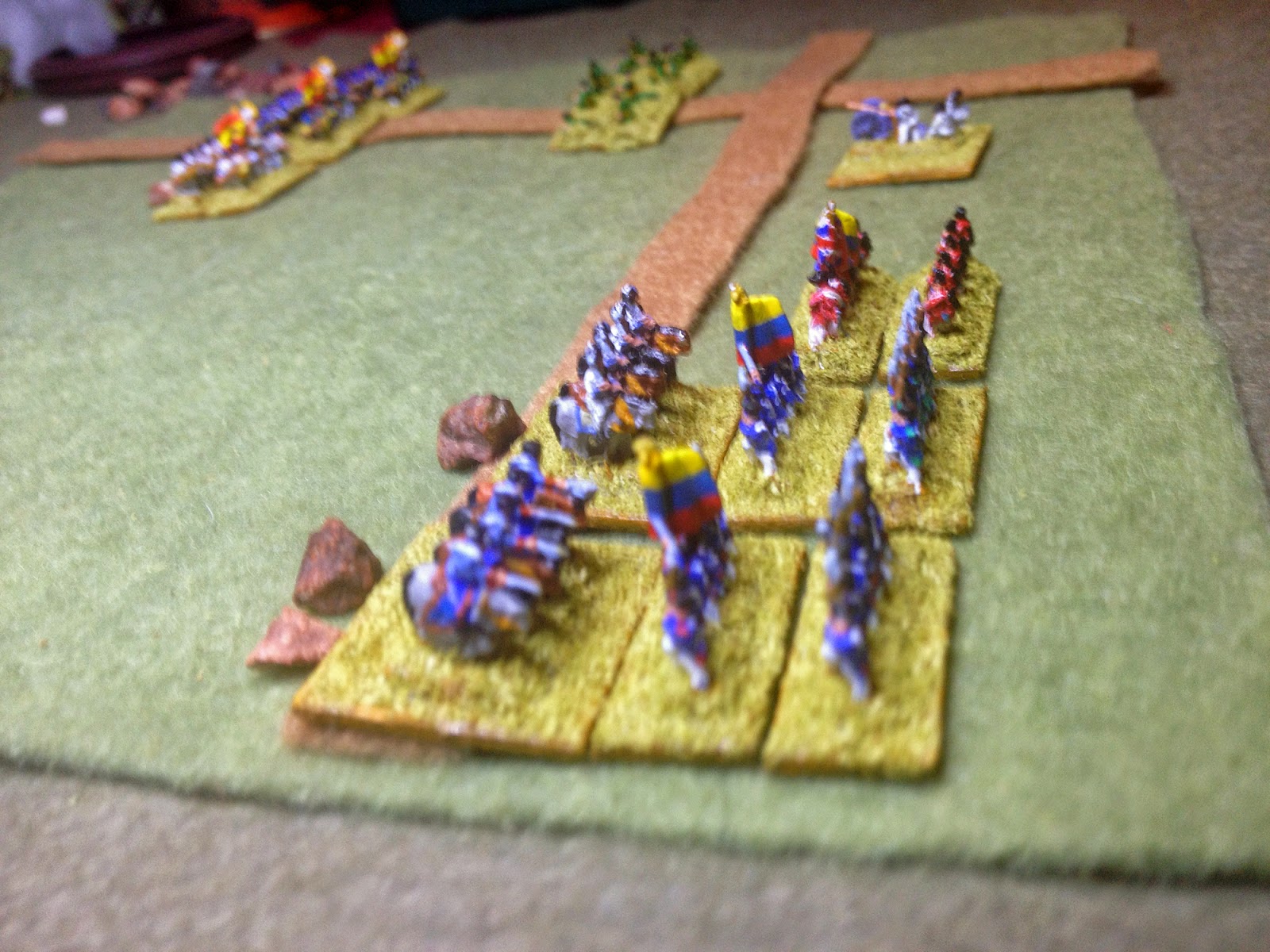 On the other flank the skirmishers took a right hammering from the advancing Royalist infantry. One of them was taking hits, it's true, but that was from the Republican artillery that's not in shot. 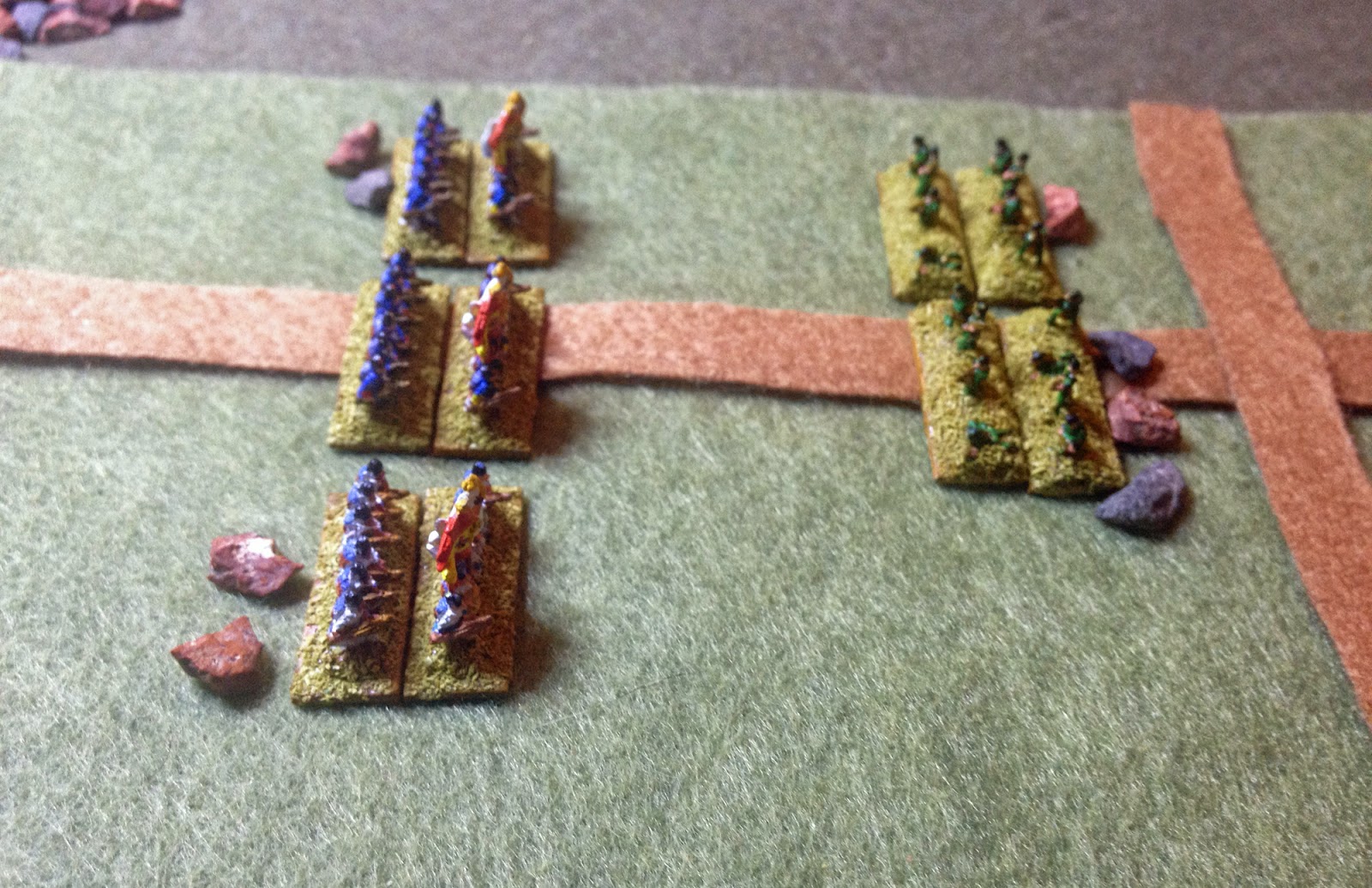 The cavalry back off, ready for another go. 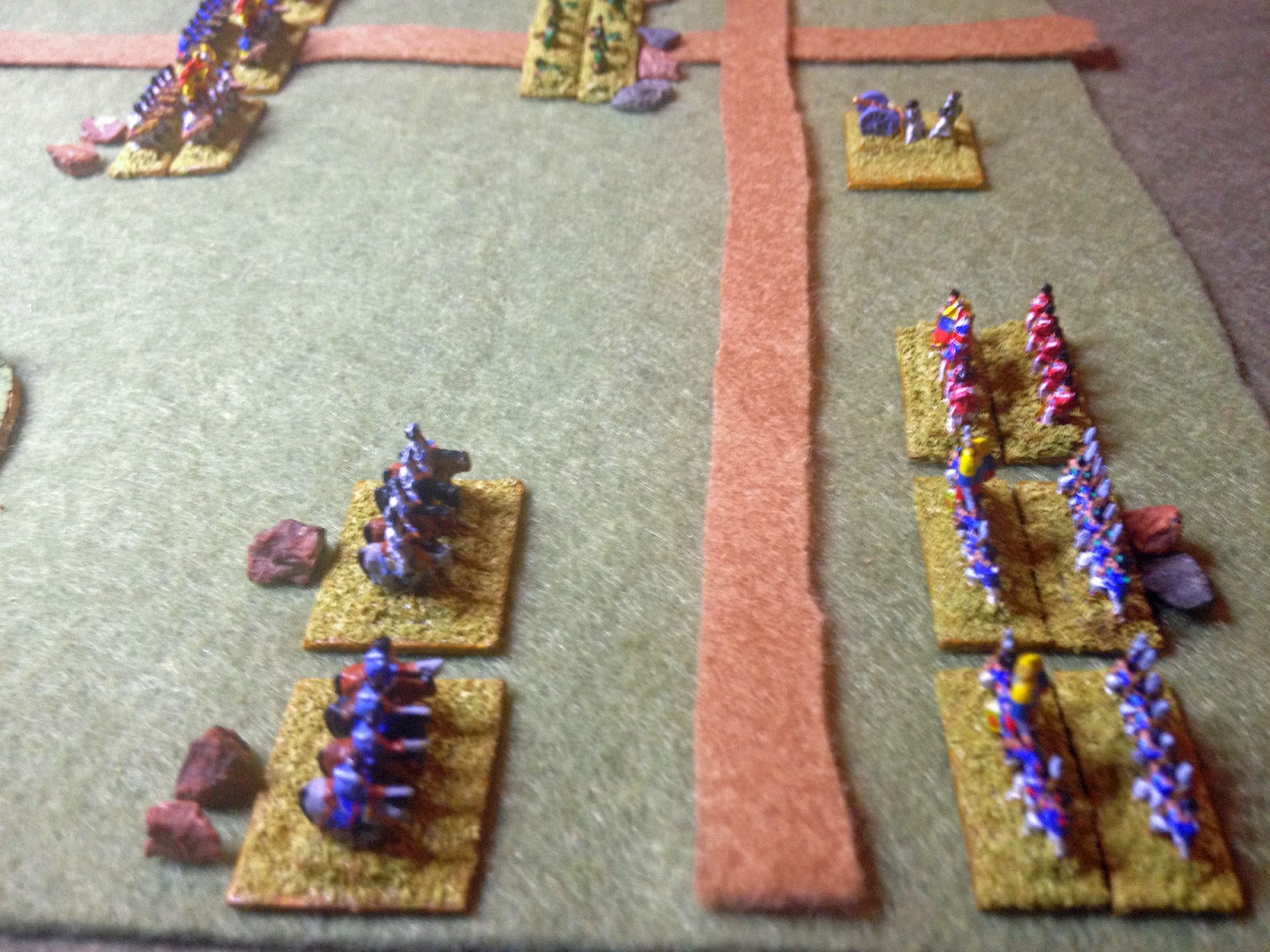 Here's the game with added smoke garnish, and a few more hits. 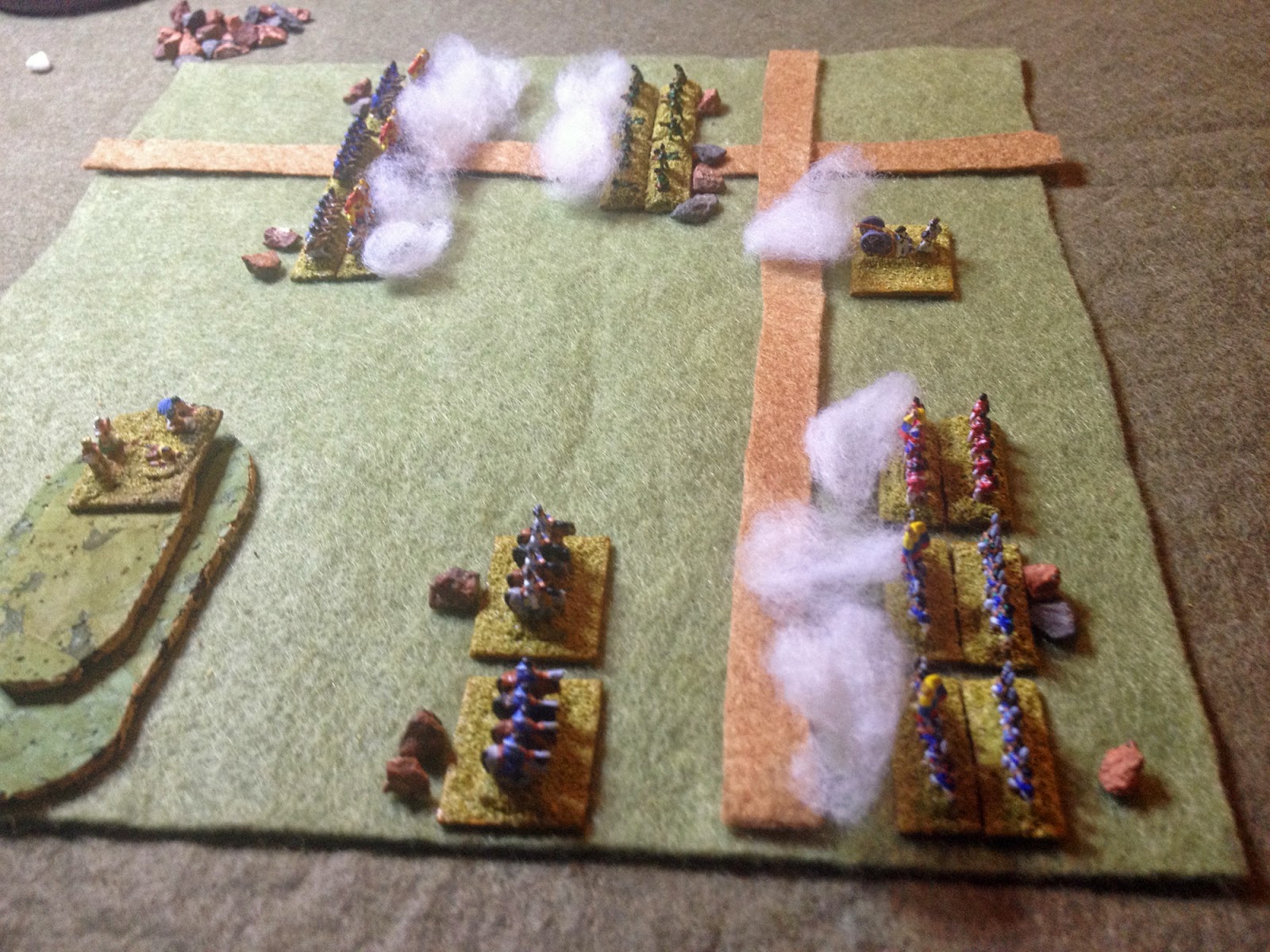 In the middle one of the Republican units marches off to try and relieve the troops at the crossroads. 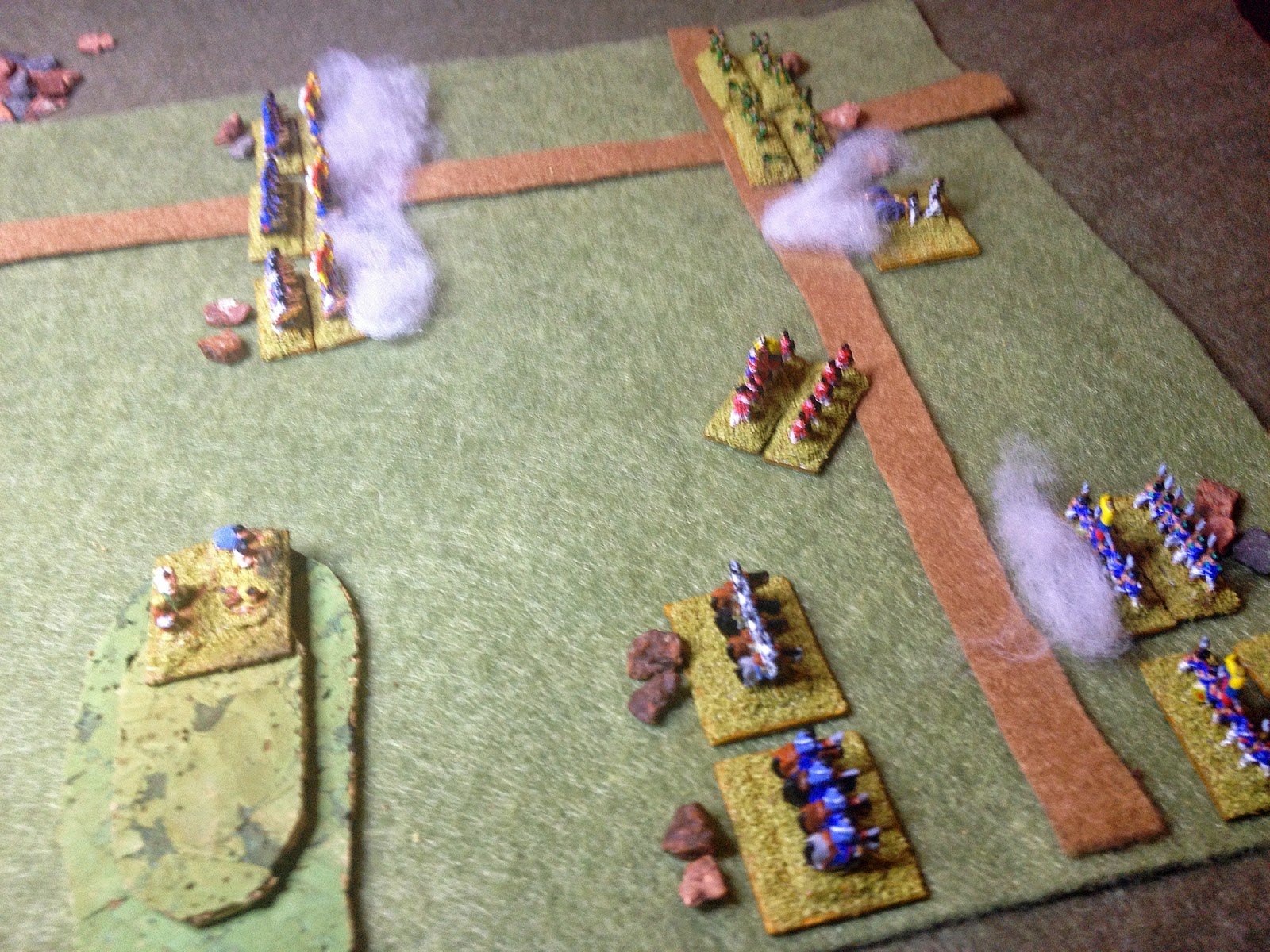 The cavalry responded by swinging that way as well, hitting the advancing unit in the flank. 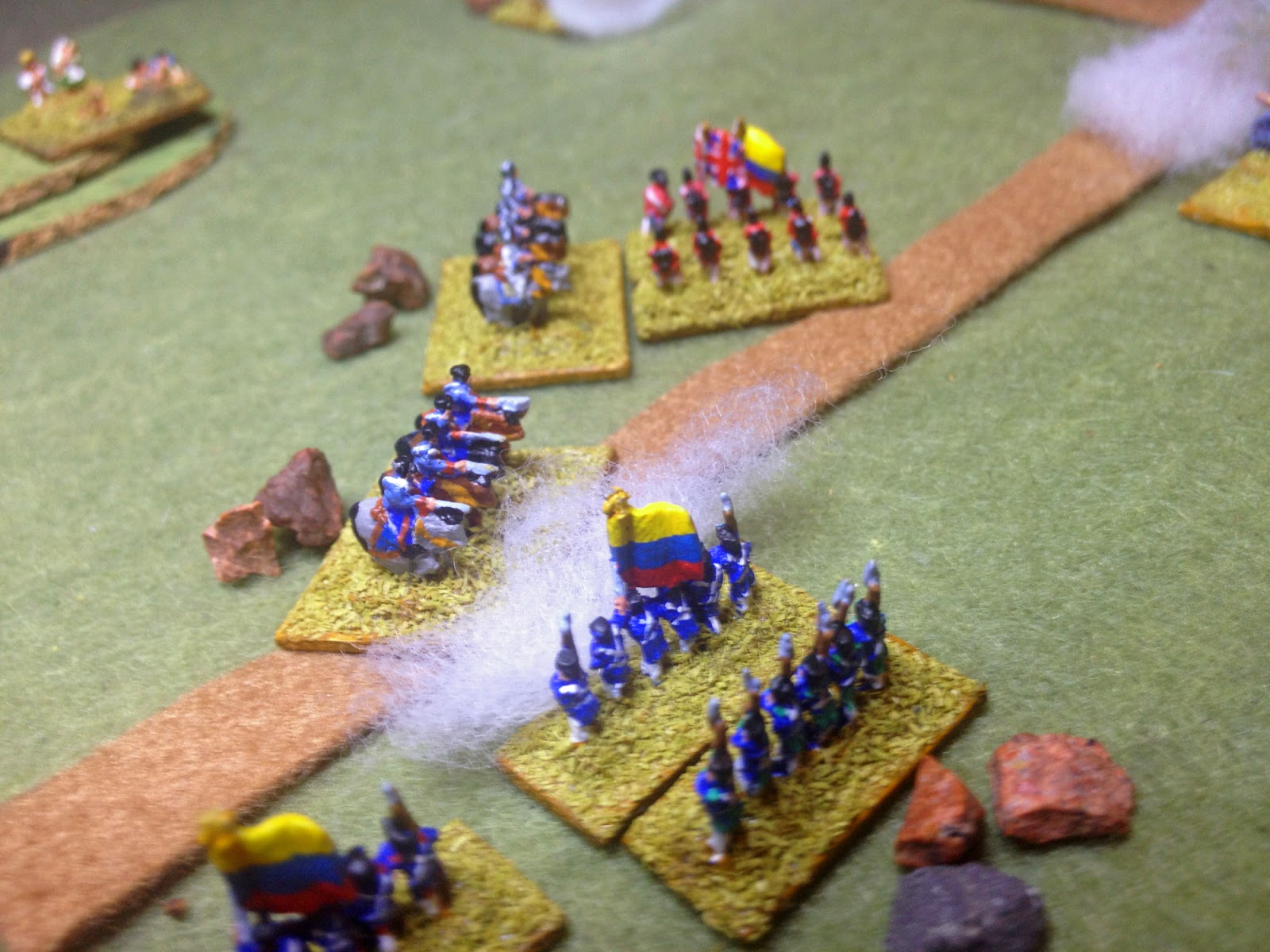 One of the skirmishers was looking a bit weak now, and evading hadn't really helped. 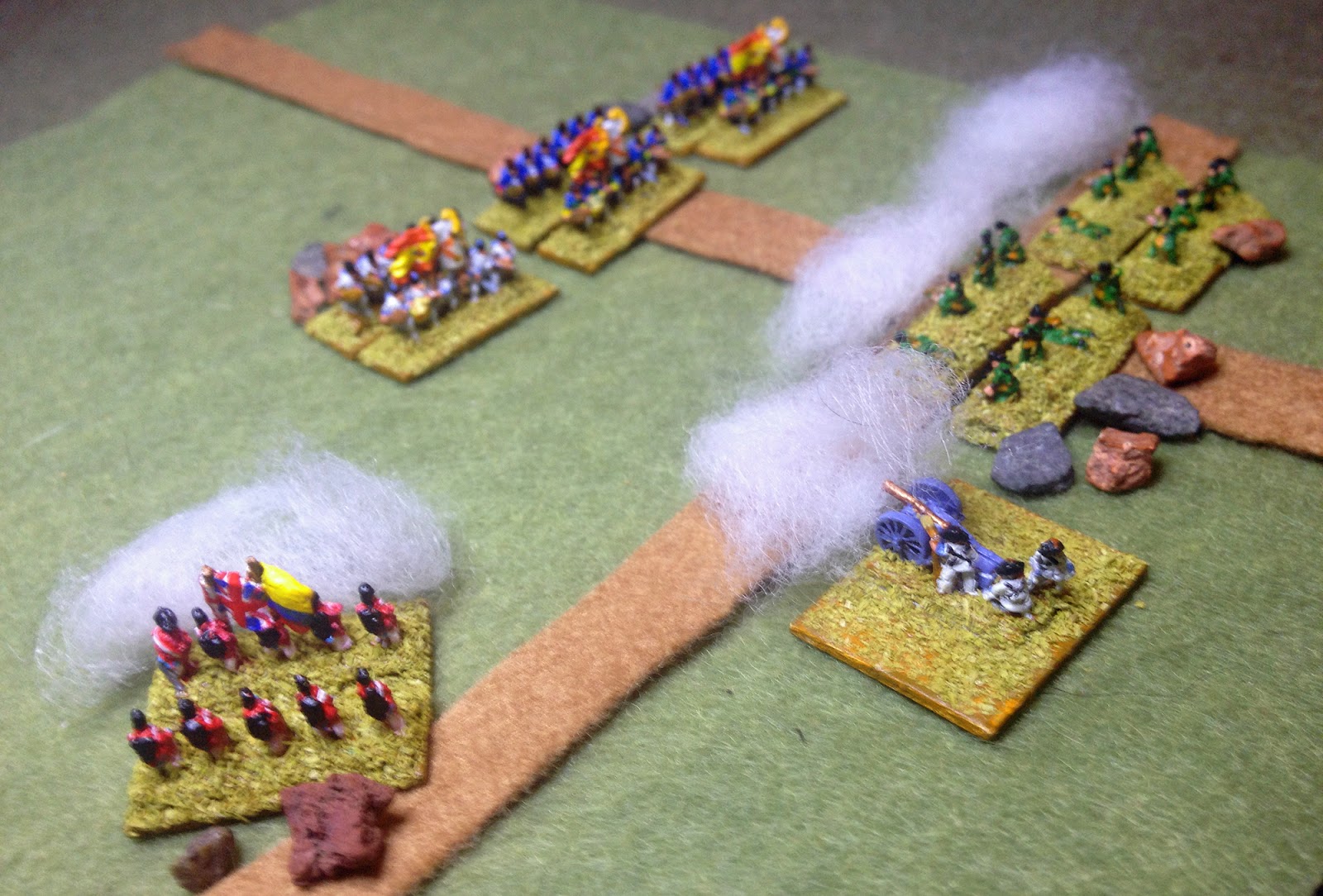 The cavalry kept attacking. And kept passing the roll to see if they became blown. 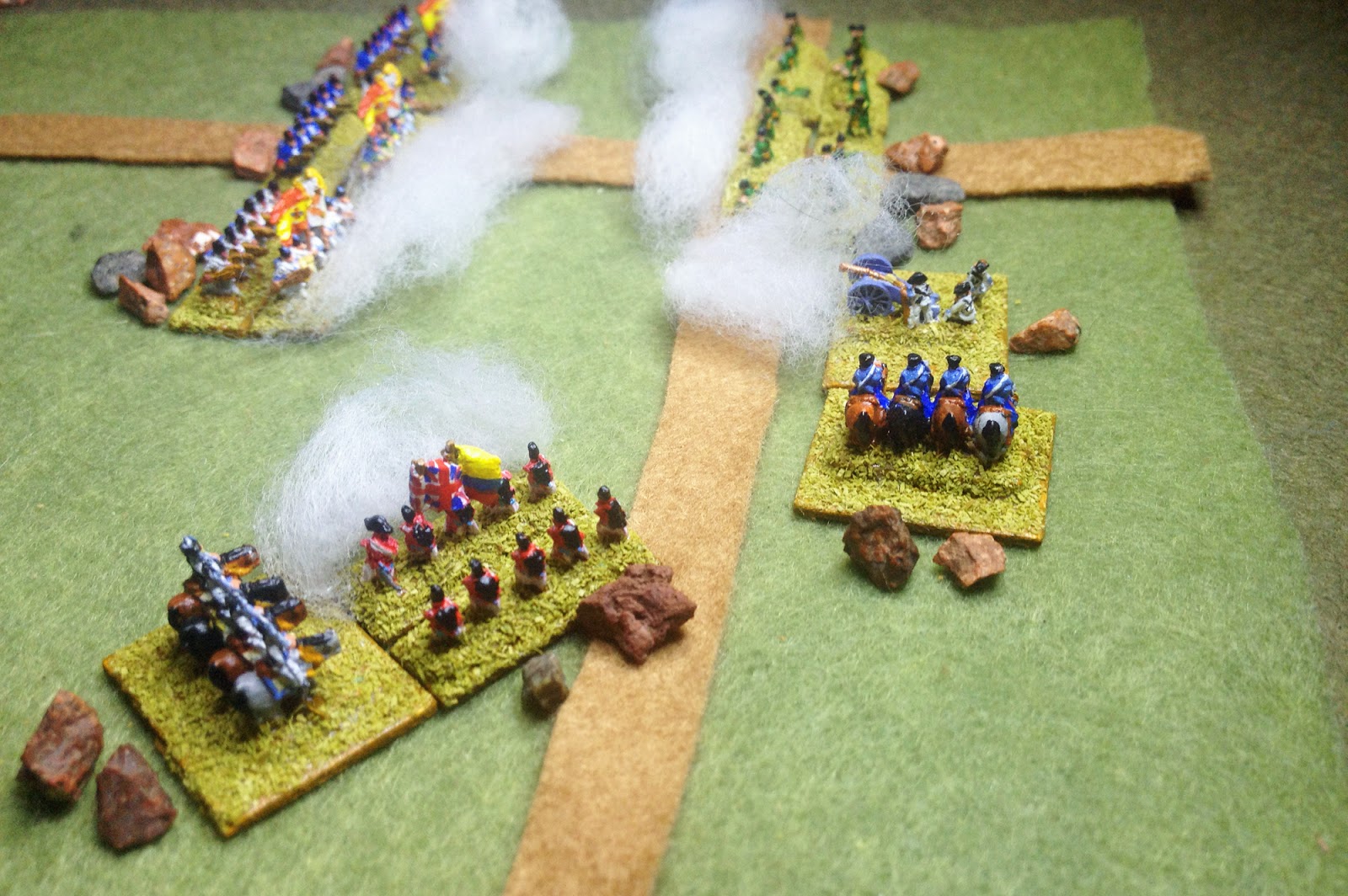 The one Republican success - their artillery routed a Royalist infantry unit. 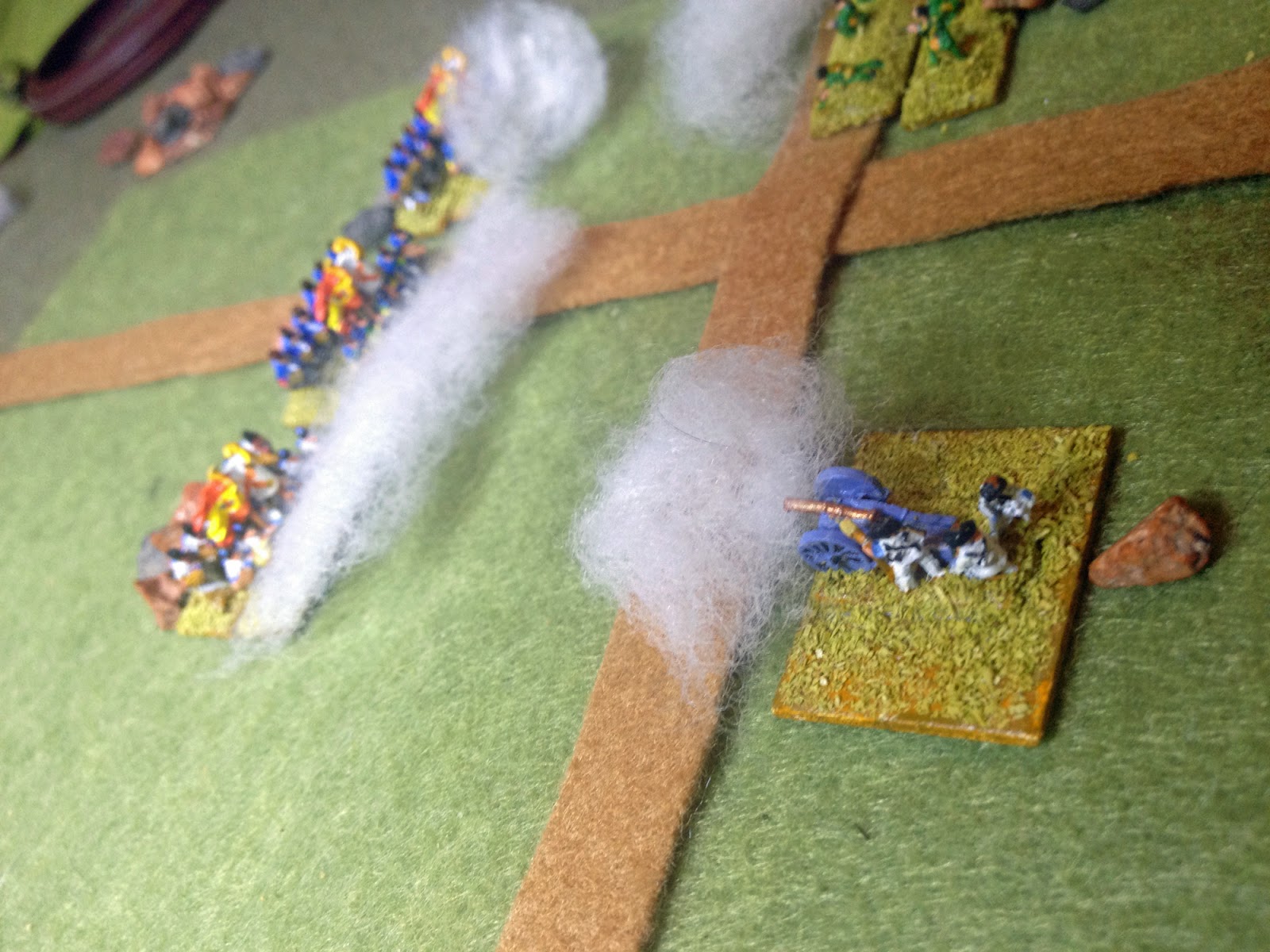 It then got charged by the cavalry, whilst the other unit, now blown, mopped up the remaining infantry unit. On the other flank the Royalist infantry calmly shot down the Republican skirmishers. 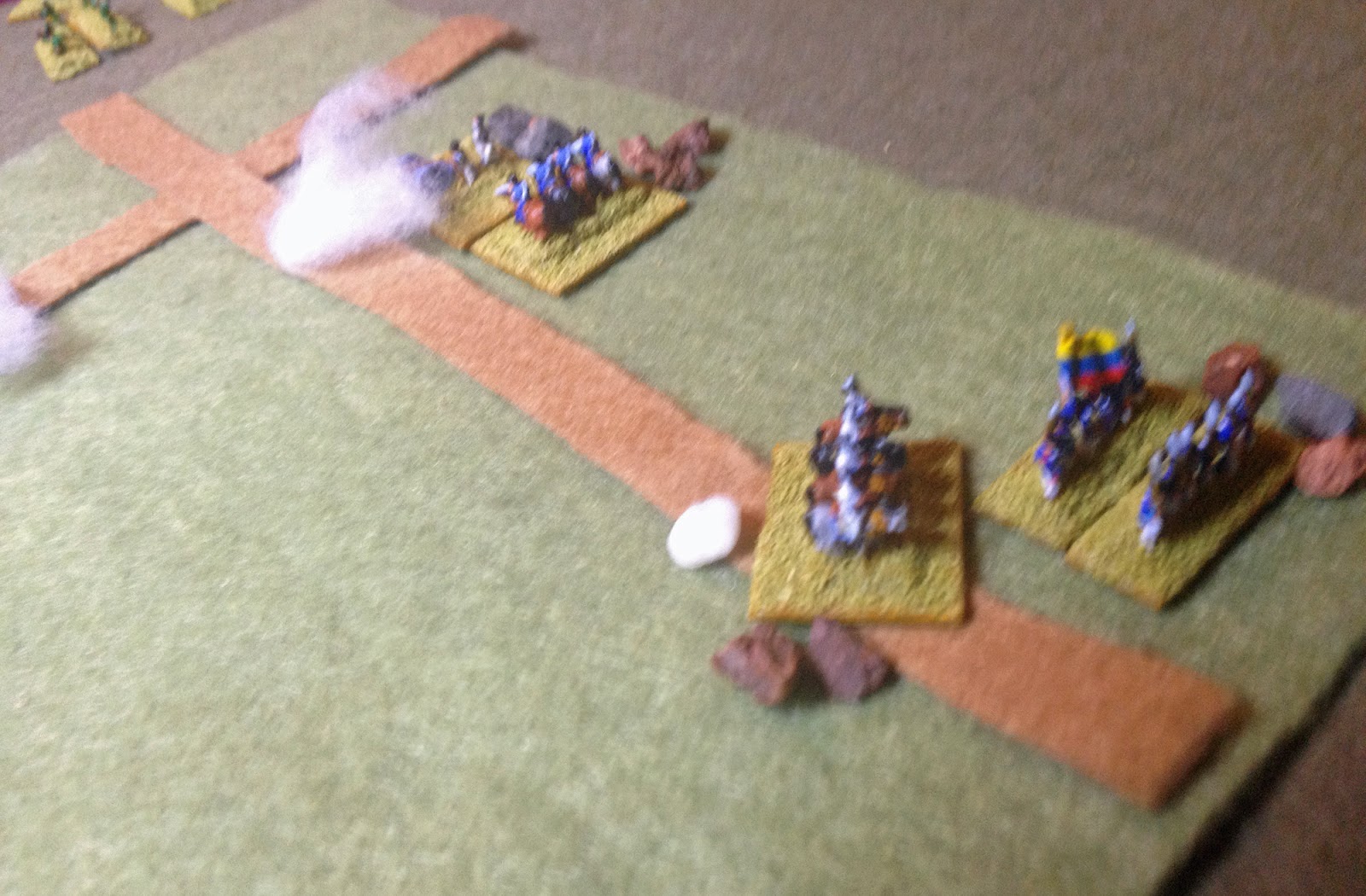 The objectives were almost irrelevant in this game; the Royalists won by just advancing and rolling over the top of the opposing army. This was really a function of the troops in use; I have played this scenario with ACW and GNW troops and it gives a fairly even fight, although personally I think it's weighted towards the side which starts with the hill, as they move first and have the more easily defended objective.

Two of the rule changes worked fine, that for cavalry and that for artillery. Although I used it in some of the earlier test game, the skirmisher evade ability wasn't really up to much, and is more complicated to state than I like. I shall consider something else for skirmishers including the almost taboo change of allowing them to move and fire.

Follow the rest of the scenario refights HERE
Posted by Kaptain Kobold at 22:07