Tonight Ralph very kindly consented to go small, and play a couple of games of Liberated Hordes with me. I picked a couple of battles I'd played before, and therefore had OOBs for: Salta and Vilcapugio, both of which took place in 1813 during General Belgrano's campaign in Alto Peru.

In case you're new to this blog, Liberated Hordes is a variant of HOTT for fighting the South American Wars of Liberation. It uses the core mechanisms of the game, but has its own troop types and a few special rules of its own. It's not just HOTT with lots of Shooters ...

We set up Salta first. Ralph took Belgrano's Patriots, whilst I took Tristan's Royalists. The Patriots have numbers and quality in this battle. 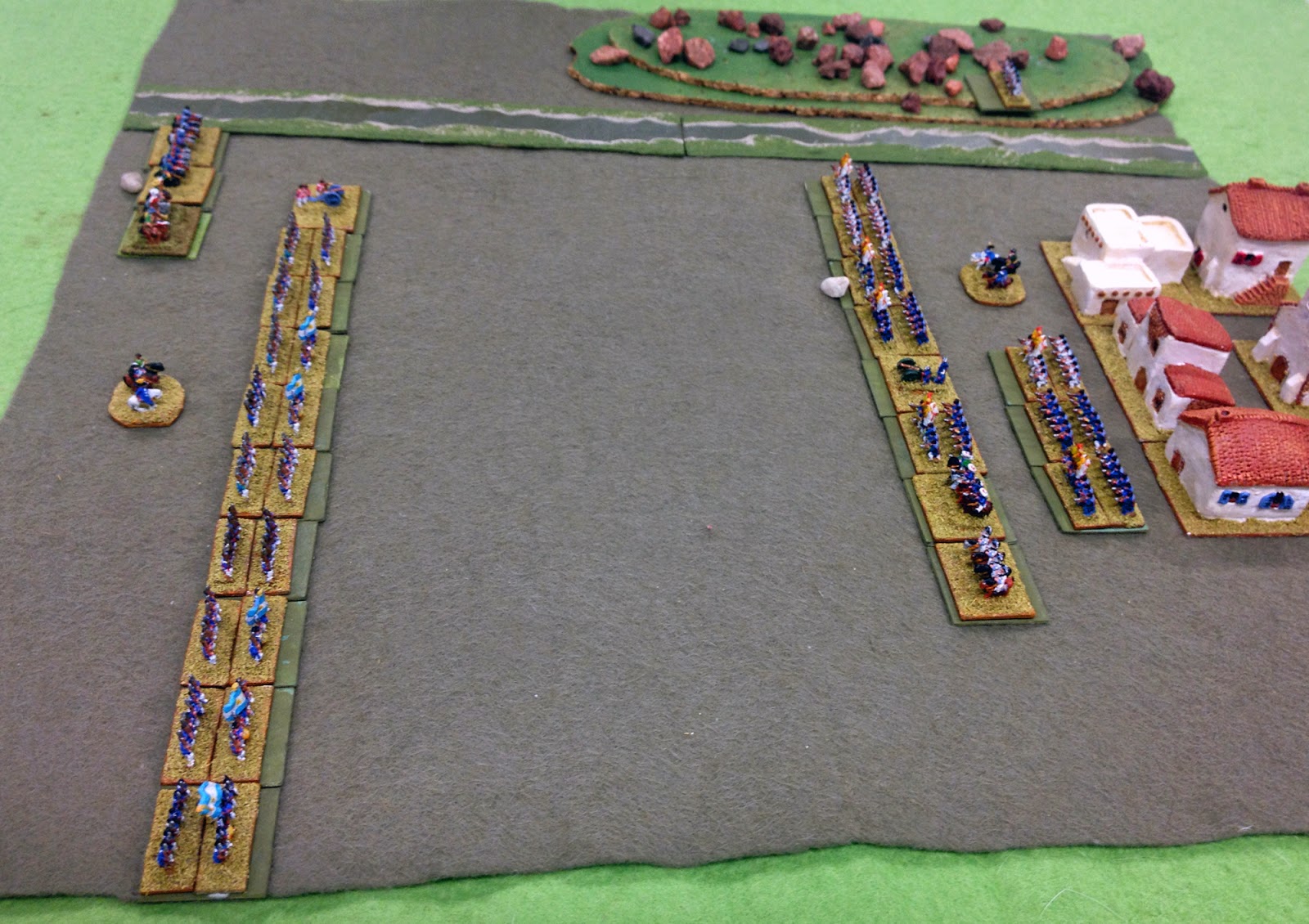 Belgrano sees to his dispositions. In Liberated Hordes an general can move from element to element; he isn't permanently attached to just one. We used small stones to mark their actual position, with these little bases just being table garnish. 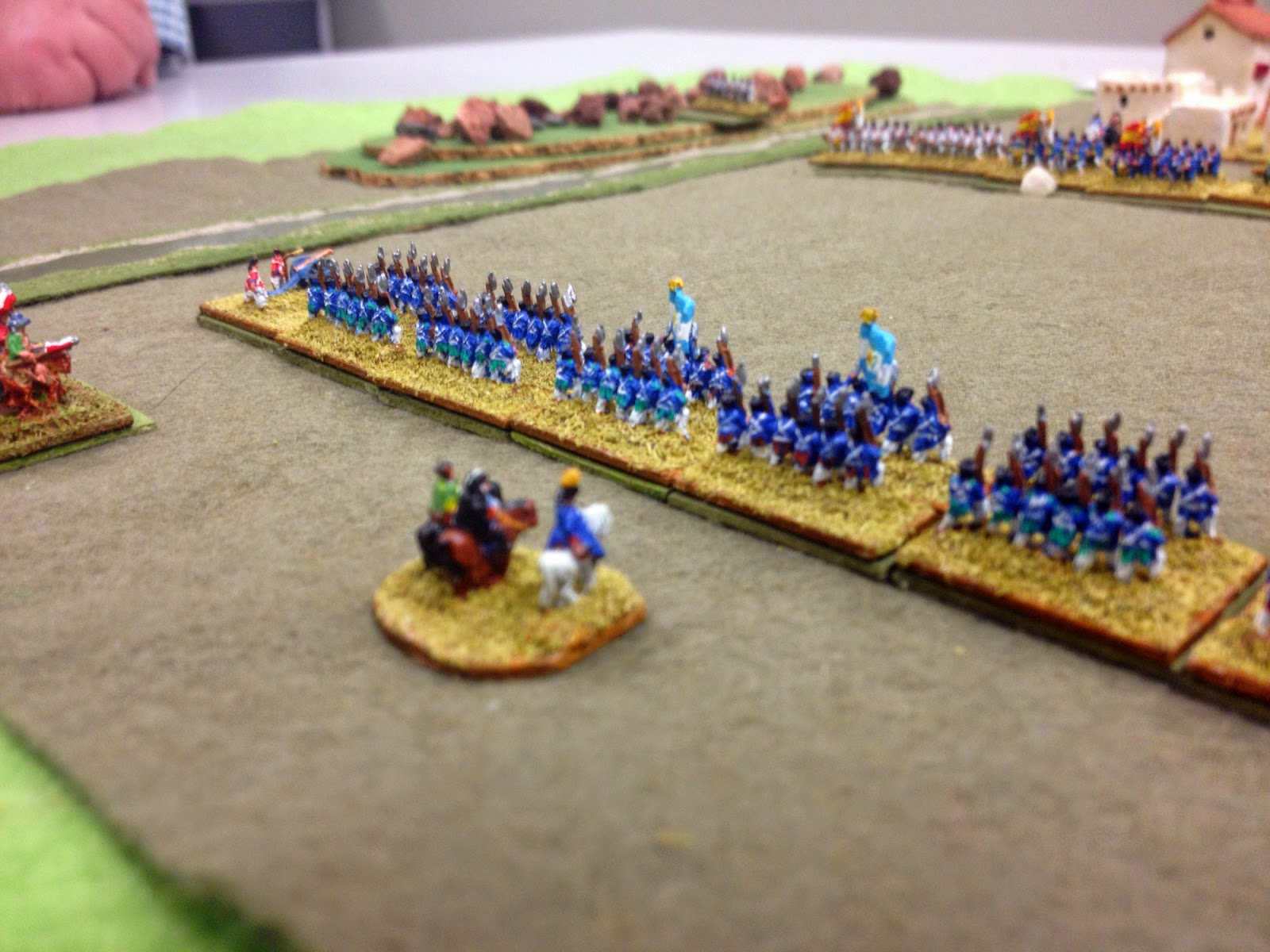 The lines closed and the Patriot musketry began to tell. 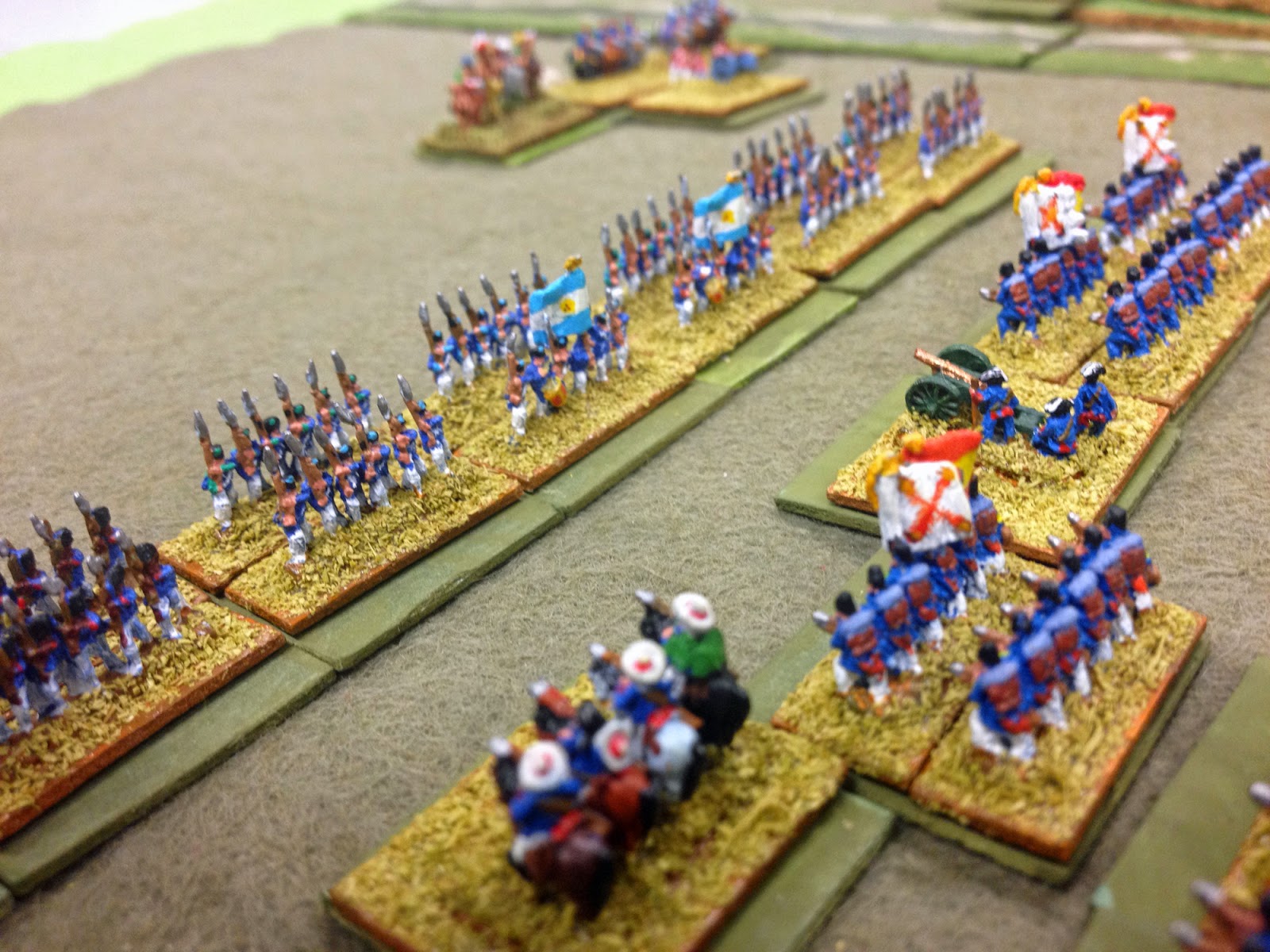 The Royalist line broke up. 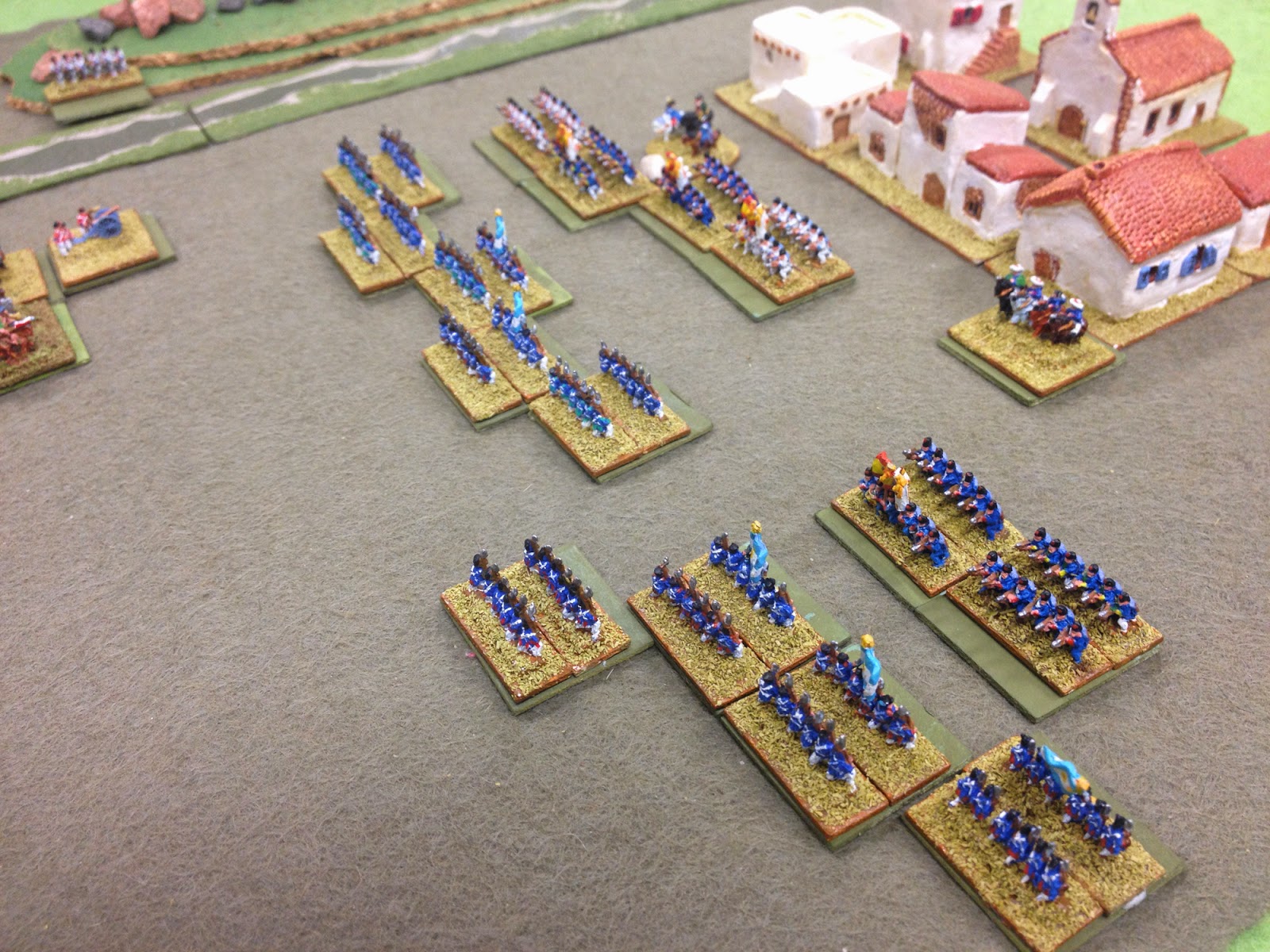 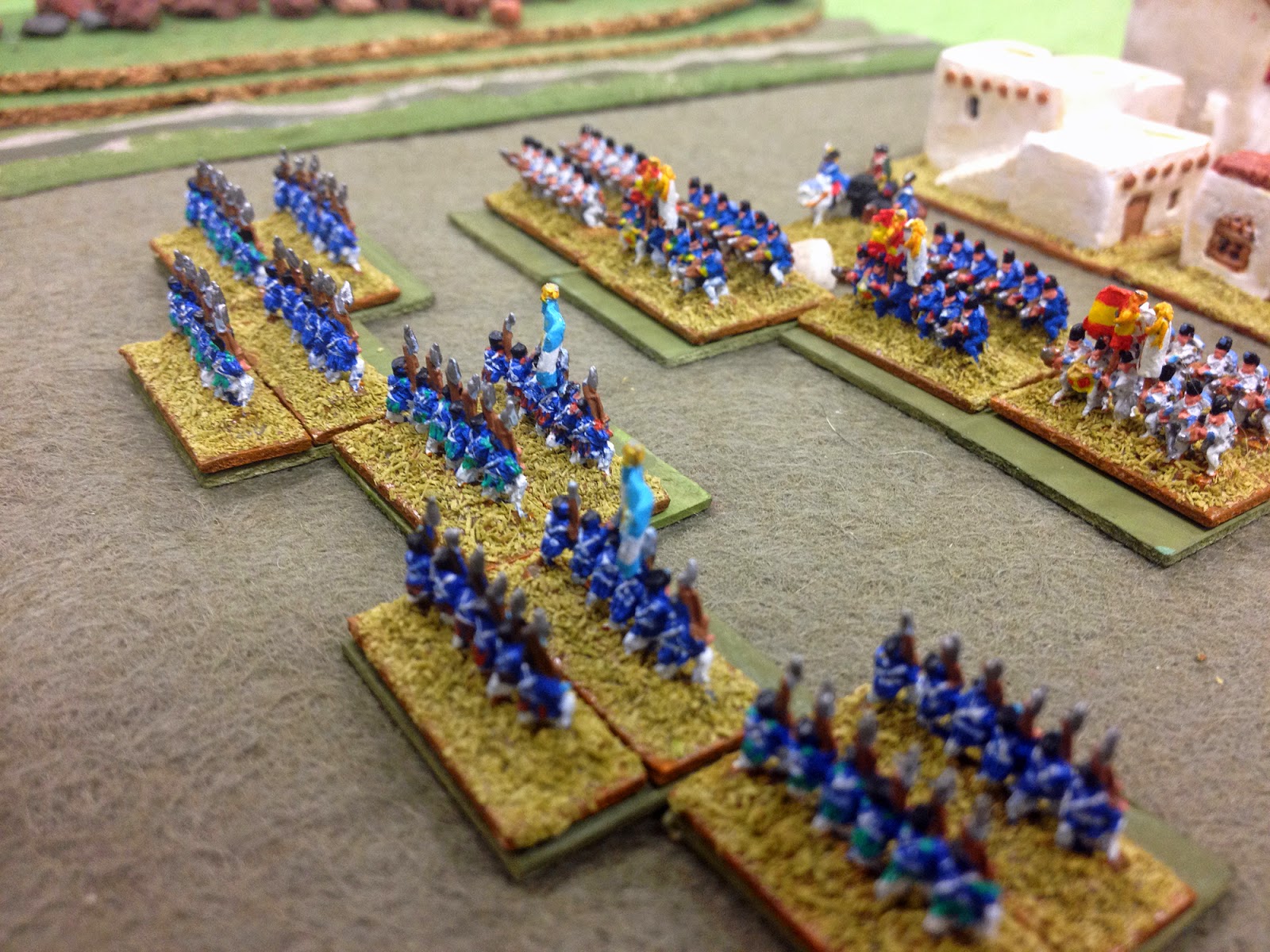 Tristan capitulates. The Royalists lost six elements for a Patriot loss of zero. 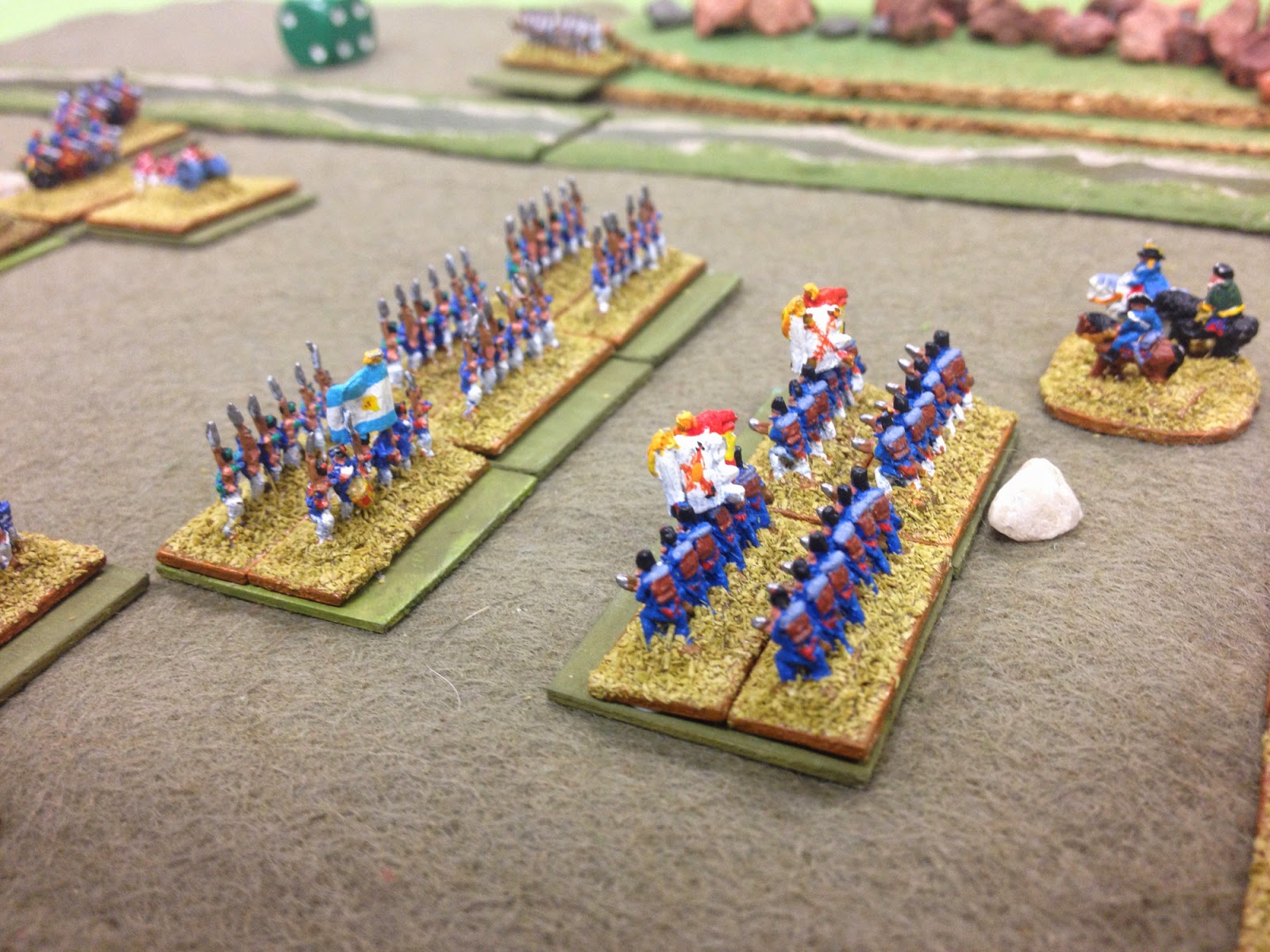 Vilcapugio was fought eight months (or twenty minutes and a cup of tea) later. The Patriot army was still commanded by General Belgrano, but the Royalists were led by the competent General Pezuela.

I'm not sure what happened with this photo. Someone obviously shot down the drone taking it. 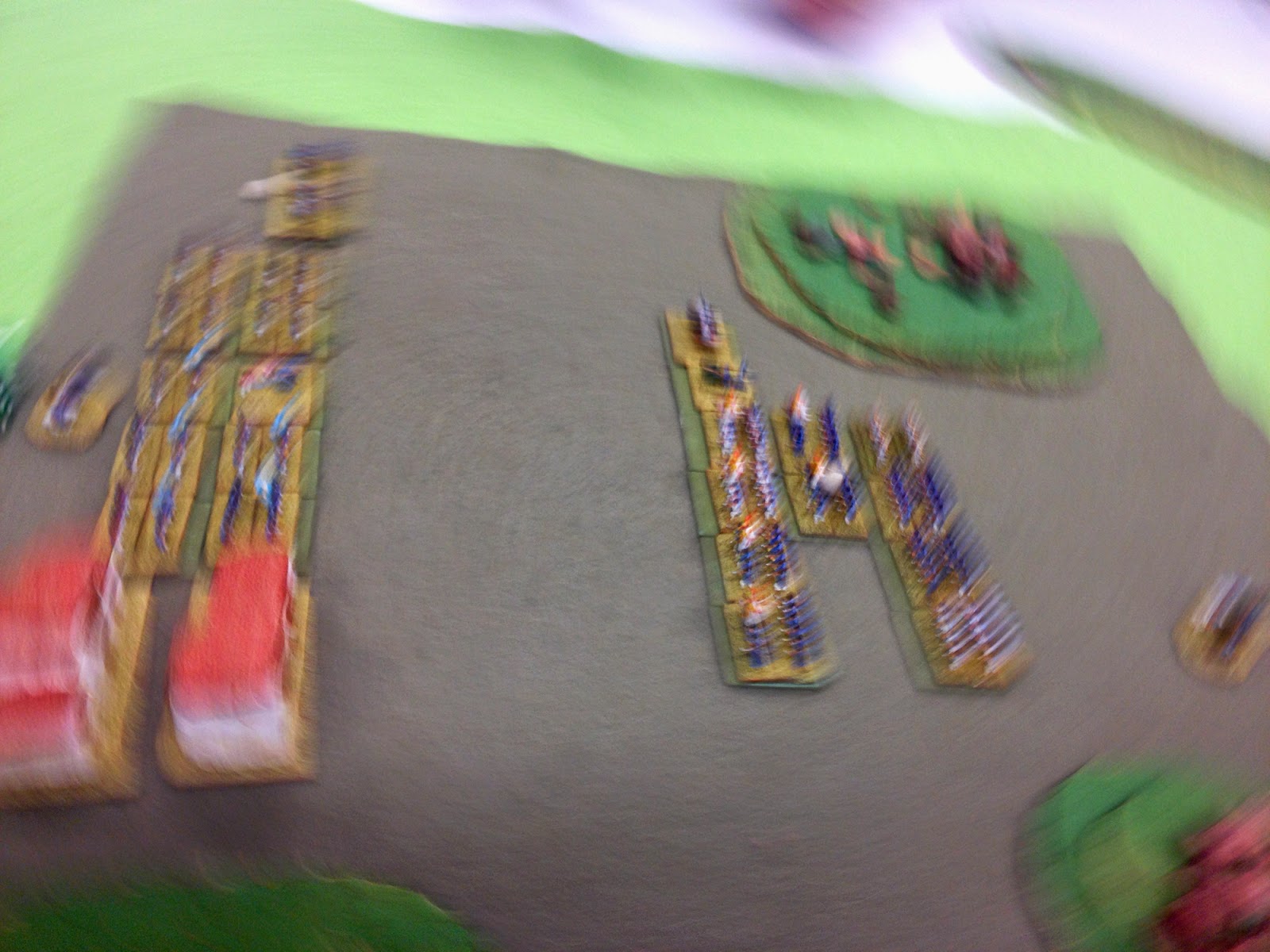 As the Royalist army emerged from a defile between two rocky hills, the Patriot cavalry charged them in the flank ... 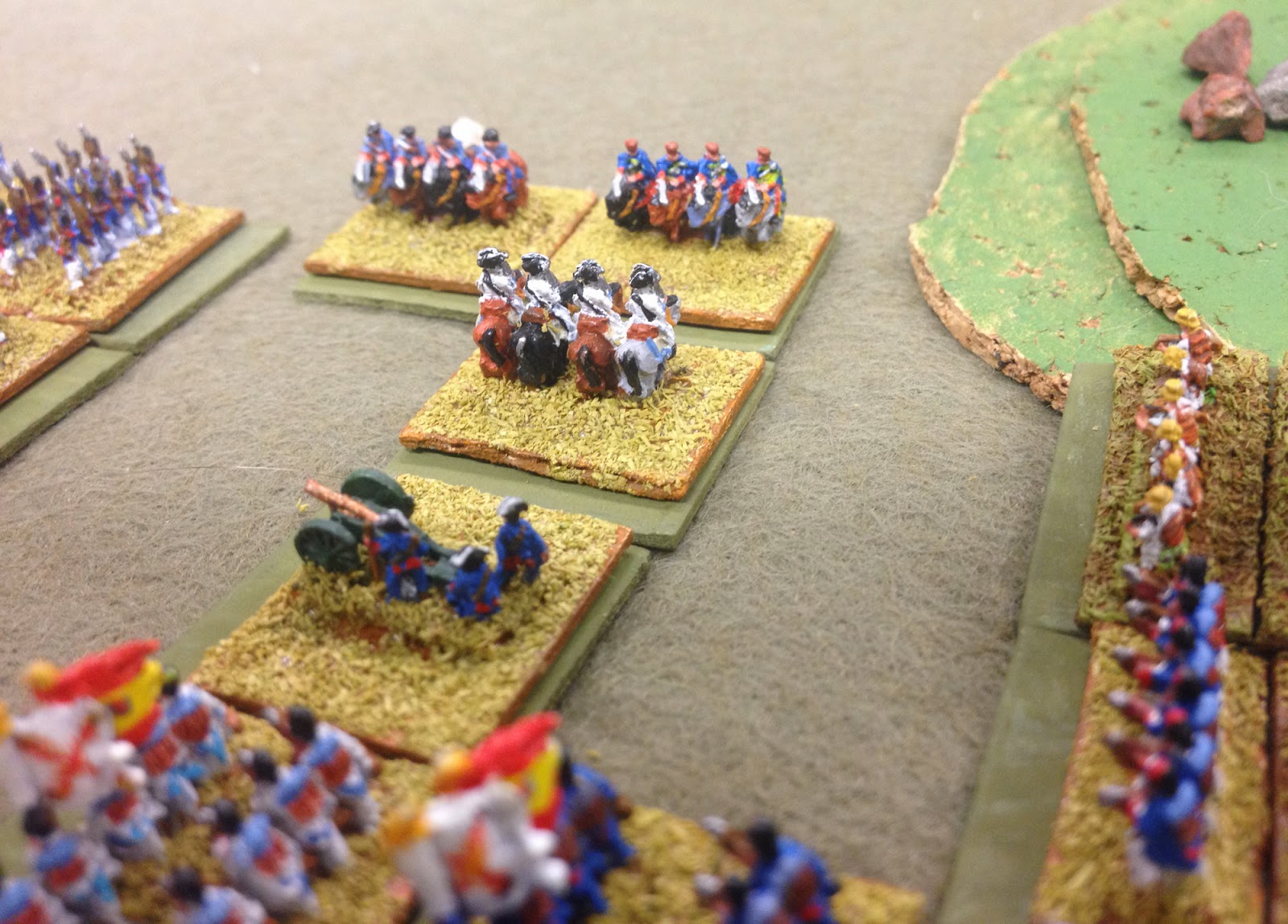 ... whilst using infantry to pin them from the front. 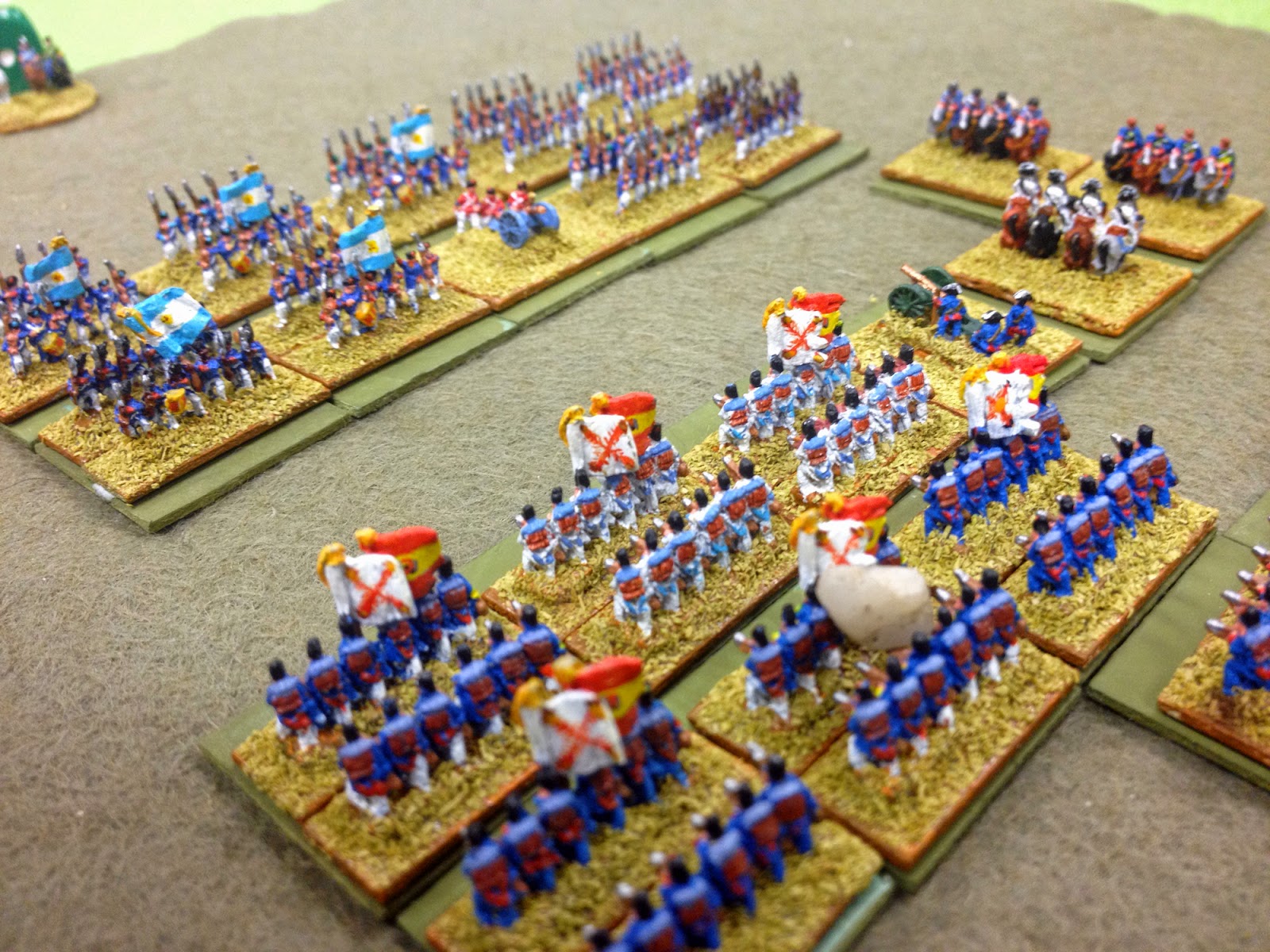 The Royalist cavalry head, and infantry on the slopes of the hill supported them in driving off the Patriots. 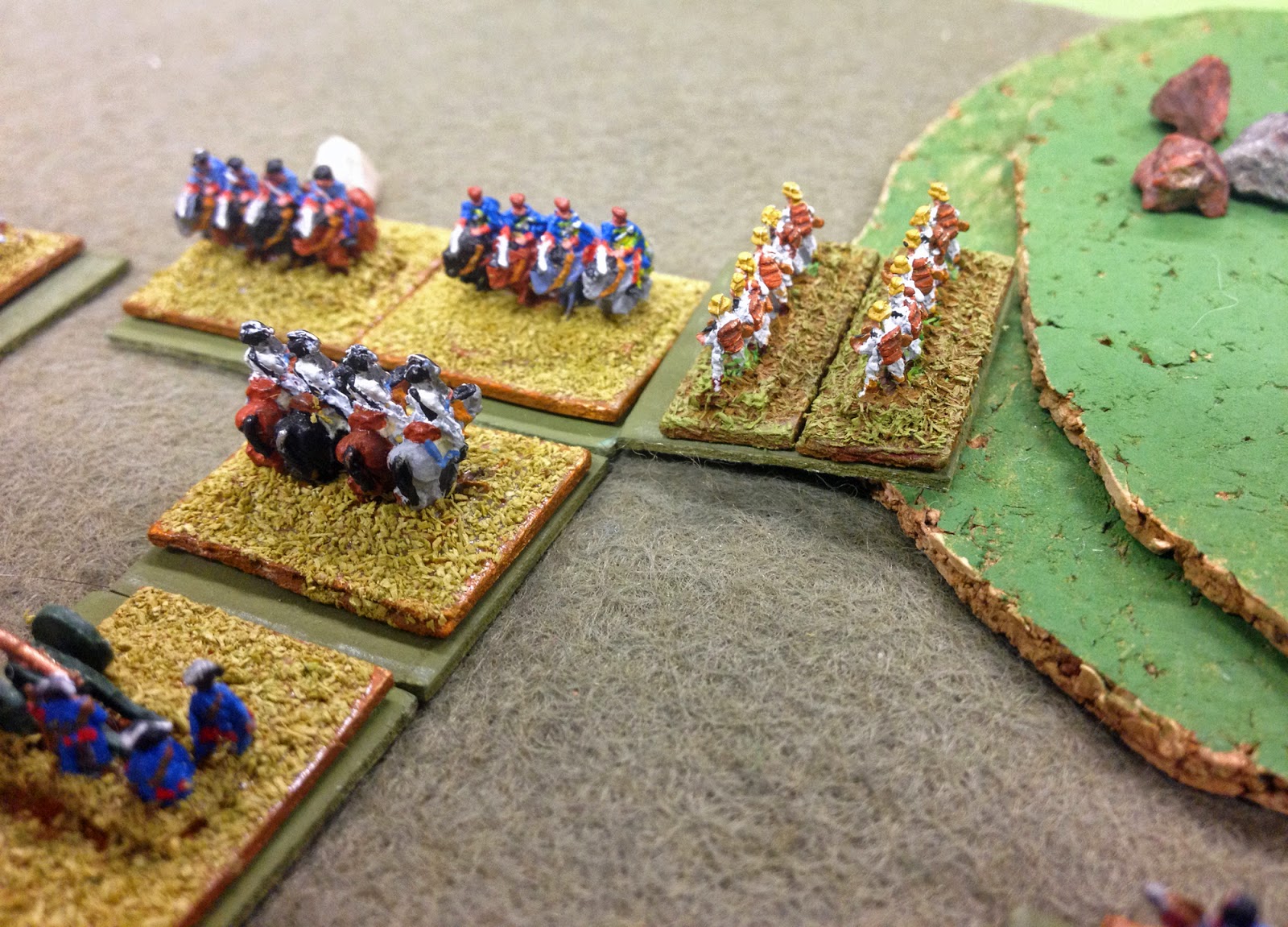 In the meantime Royalist reinforcements arrived in the form of more cavalry. 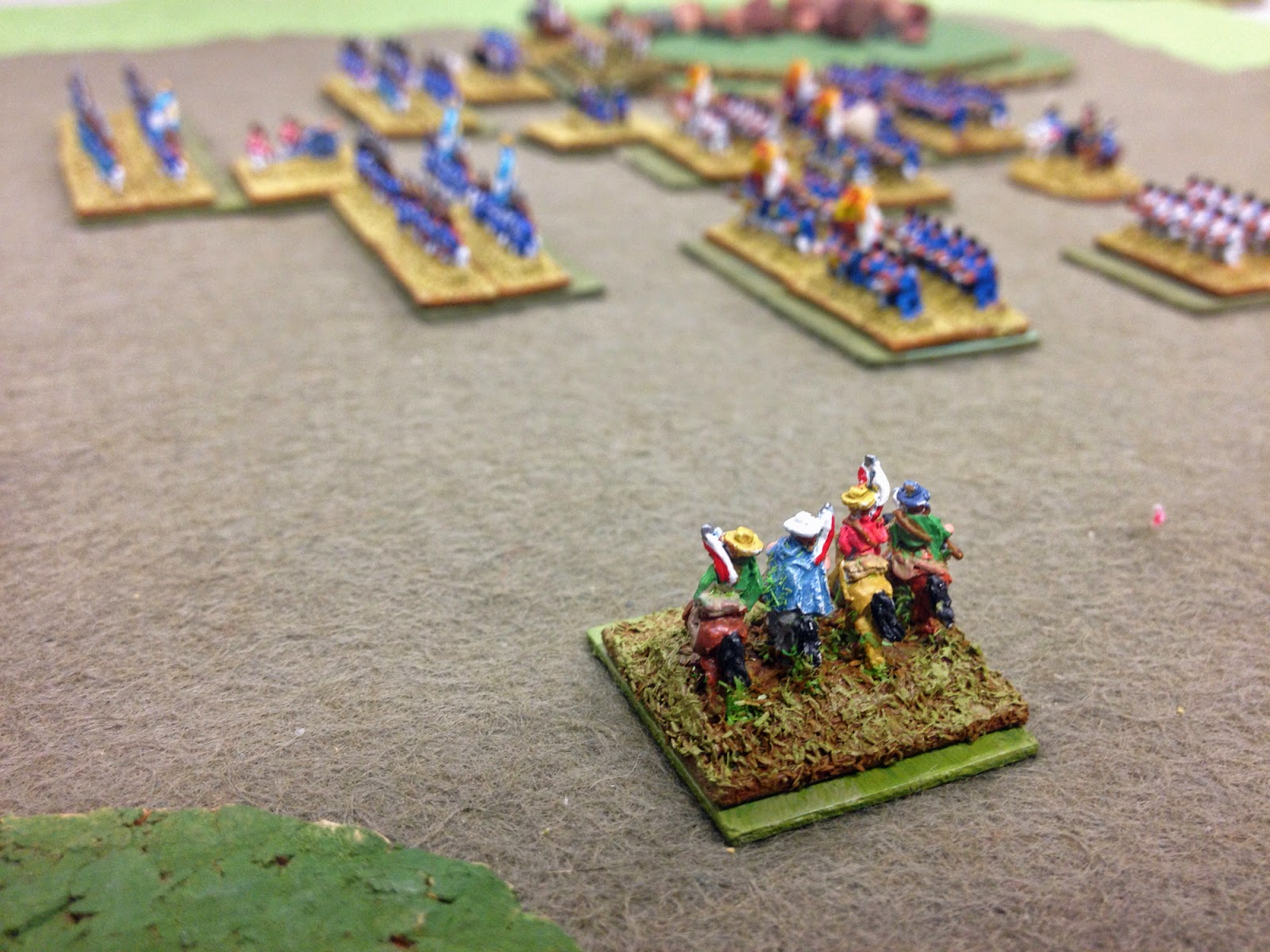 Belgrano personally led the surviving patriot cavalry in order to stabilise their left flank. Some infantry moved up in support. 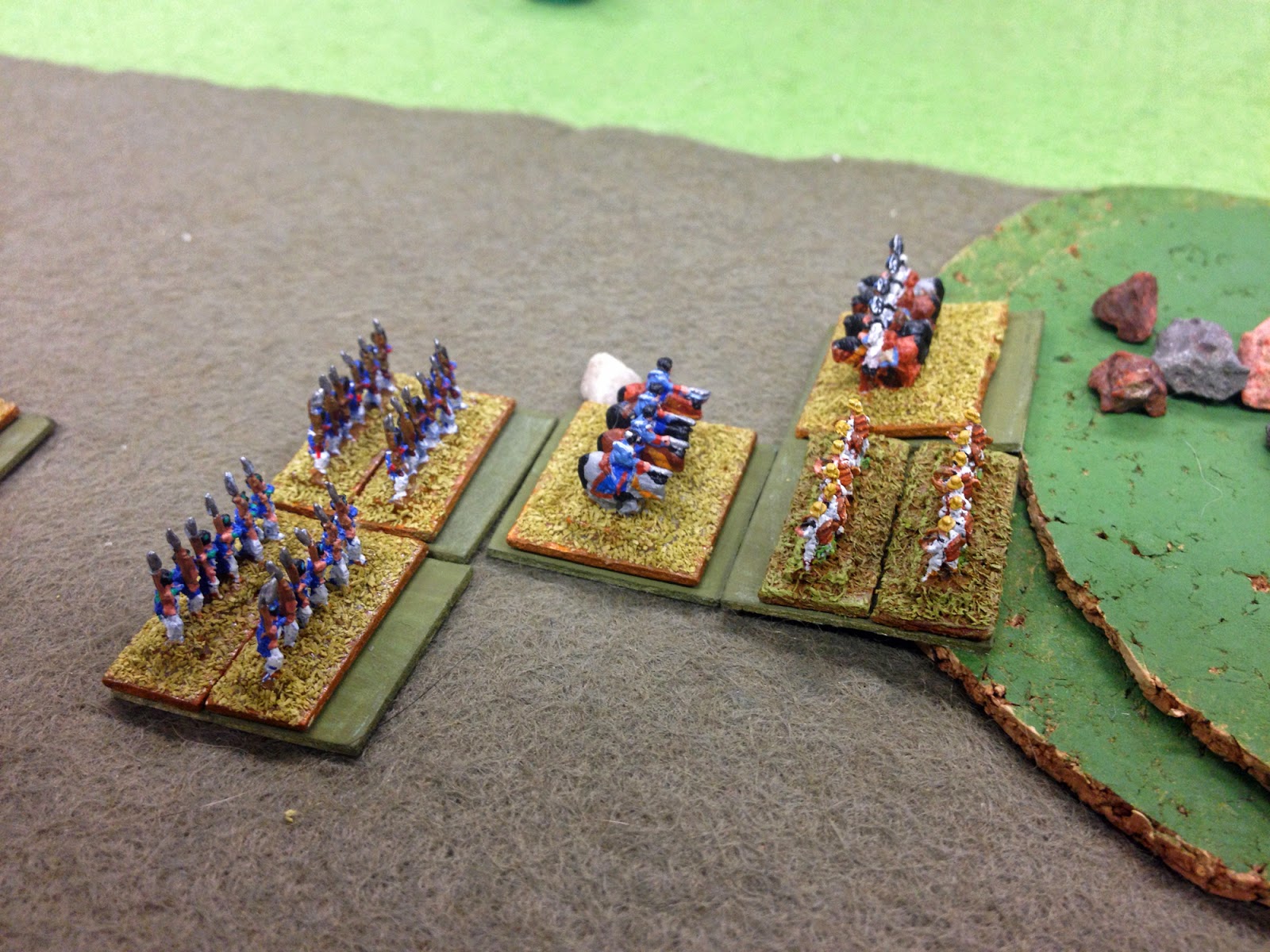 The cavalry routed and Belgrano was captured, leaving the Patriots leaderless. The Royalist cavalry now swung onto their flank. 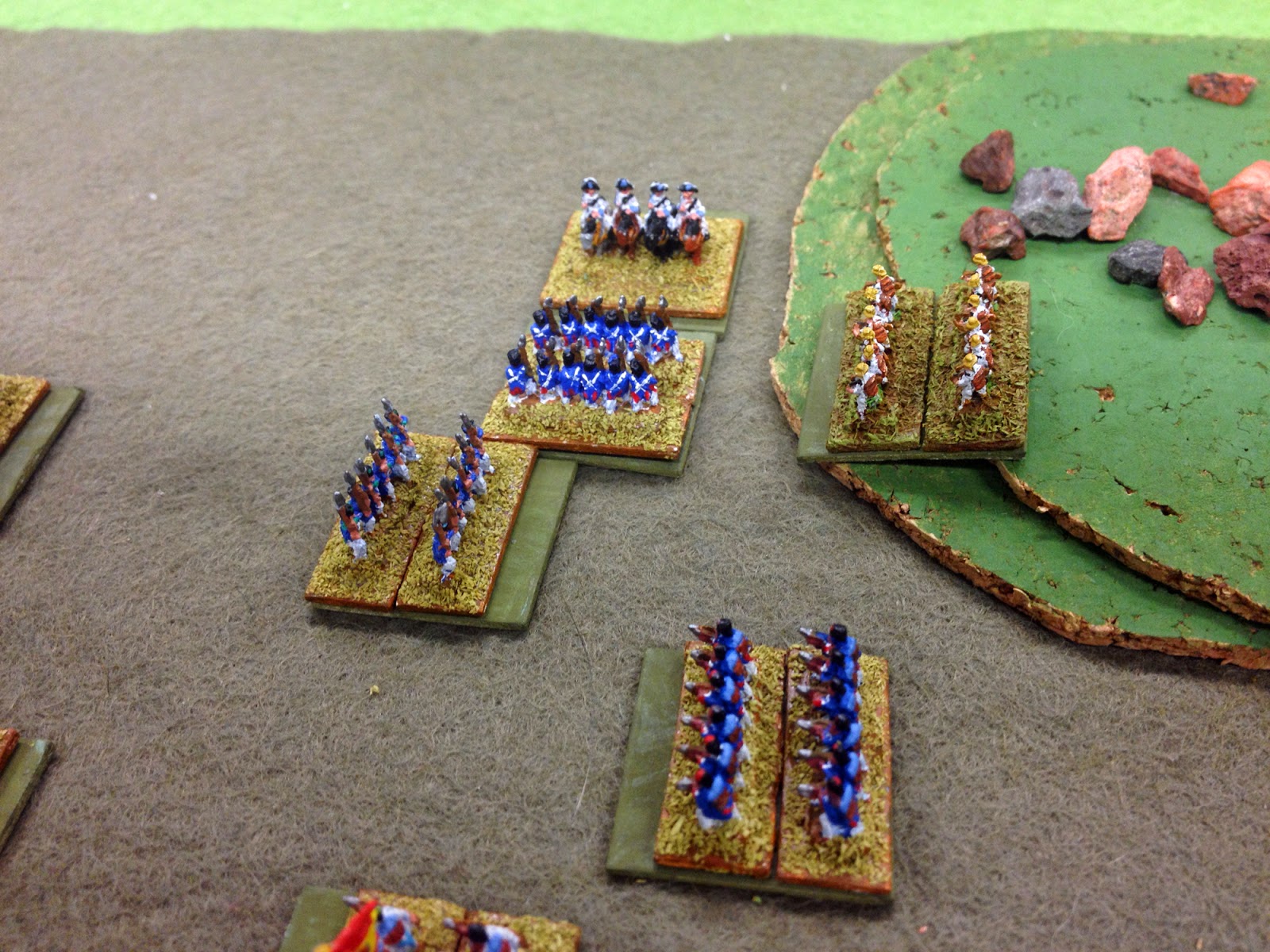 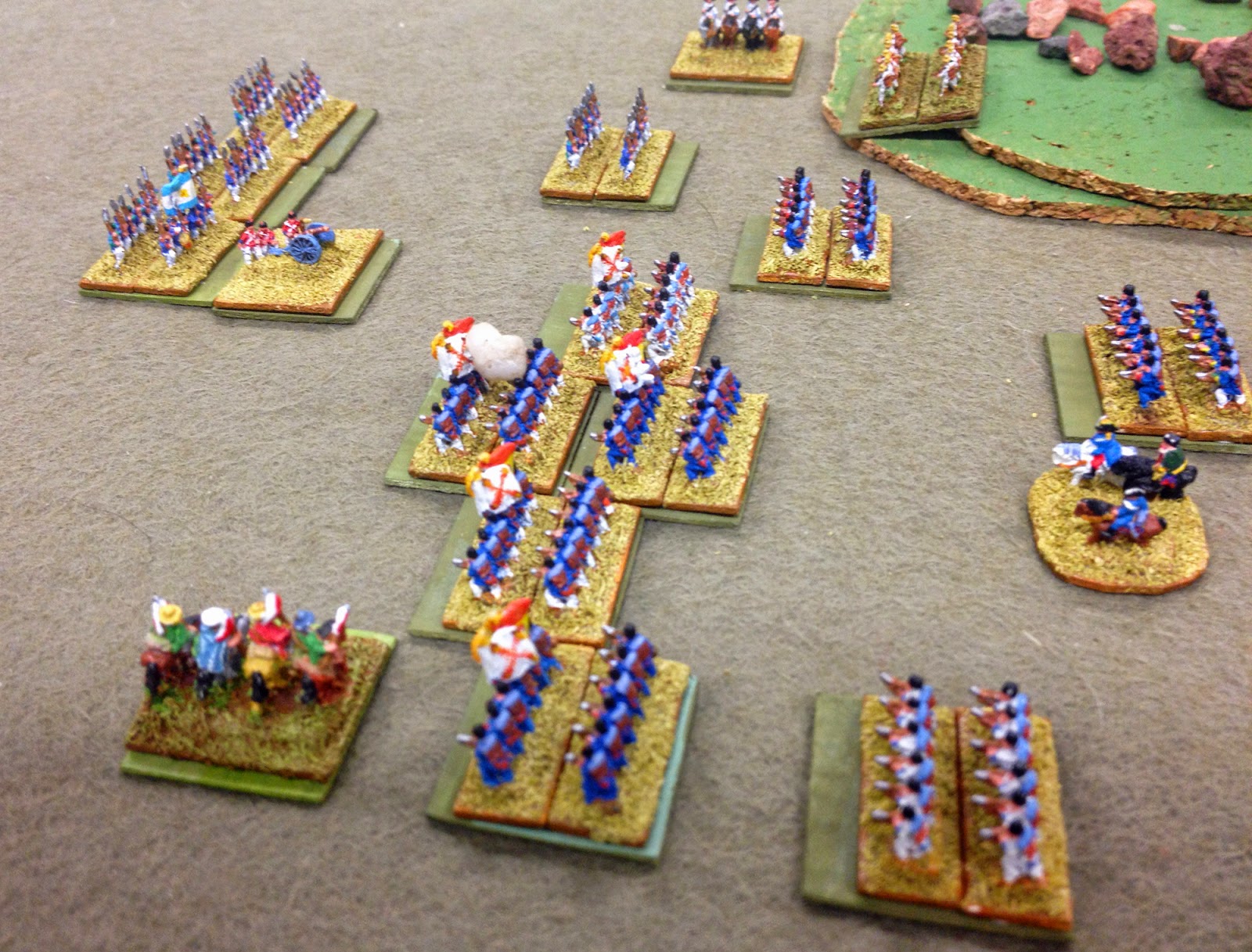 Once again the Good General bonus failed me - a Good General can, once per game, roll two dice for PIPs and select the best one. I used it just as my reinforcements arrived and Ralph's line was breaking up; a golden opportunity for my army to move in a swift, coordinated manner and sweep him from the field. I rolled a 1 and a 3.

The two games took us about two hours to play. Thanks to Ralph for slumming it with teeny-tiny quantities of teeny-tiny figures. 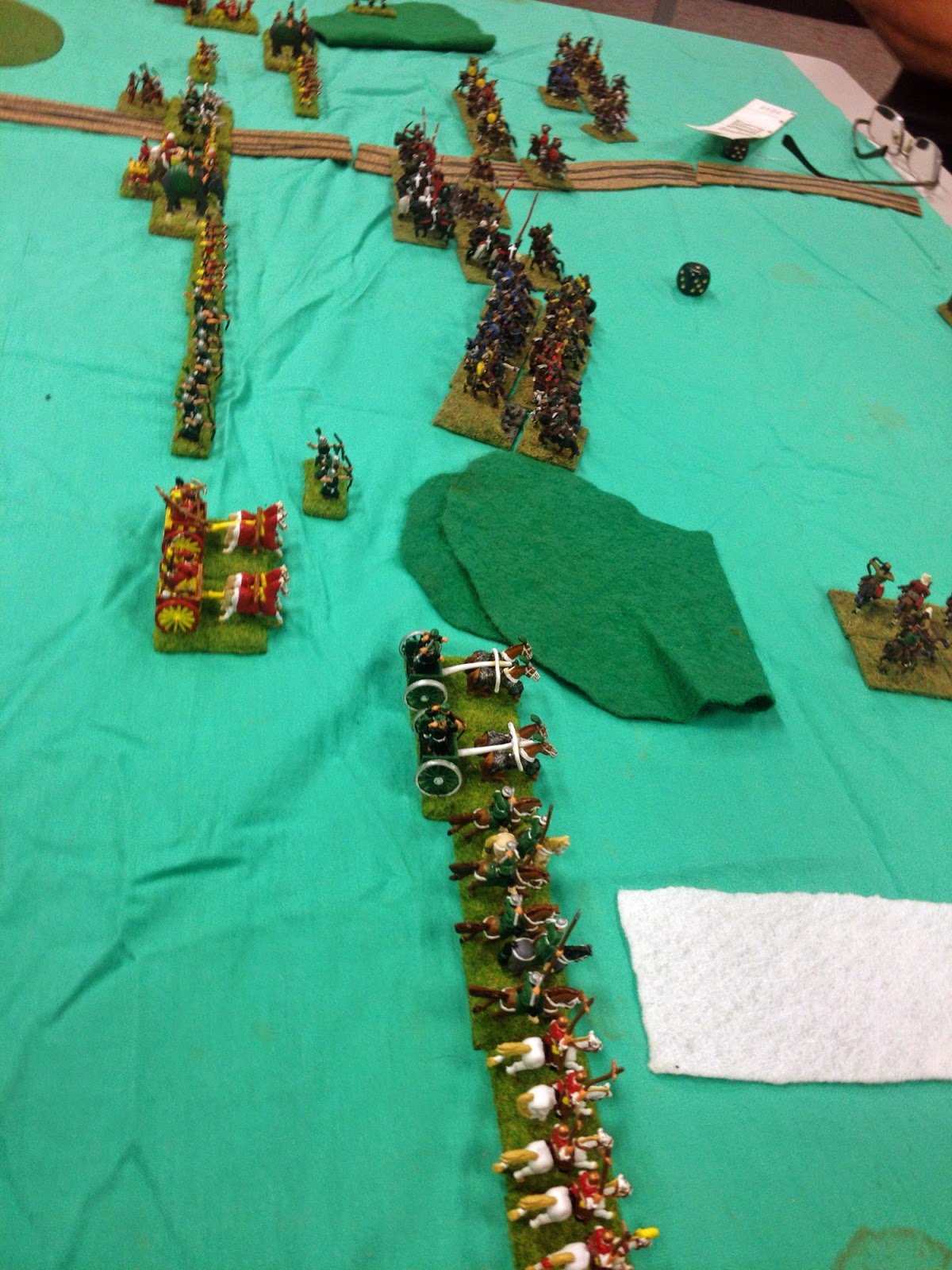 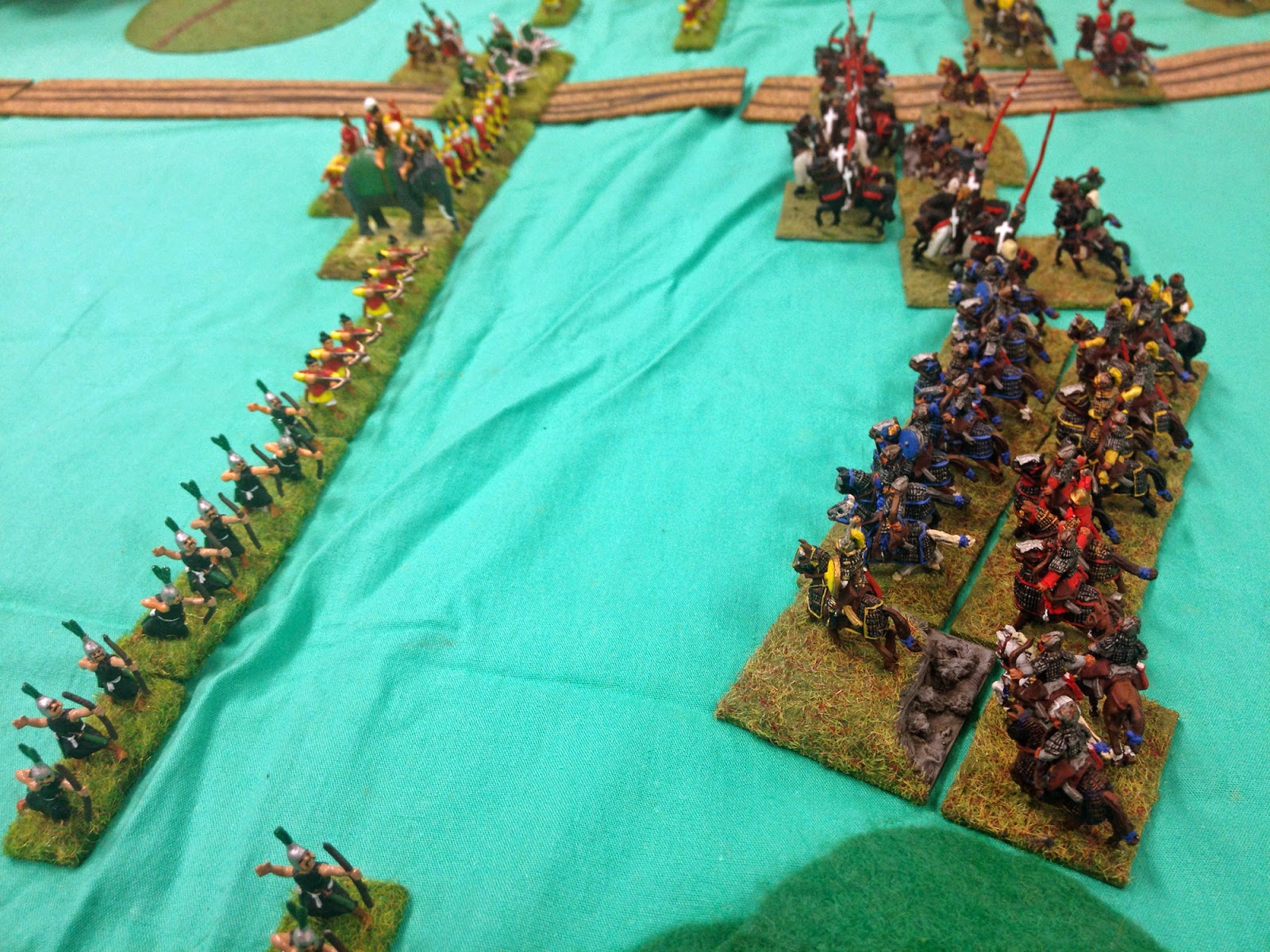