Last night we had a go with our Monocacy scenario for Longstreet. This is a five-player (well, five-deck) game - two Union and three Confederate, so a fairly ambitious undertaking.

We played in 15mm, and tried a tighter table than before; the last time we did this some troops barely got into the fight because the armies started too far apart. 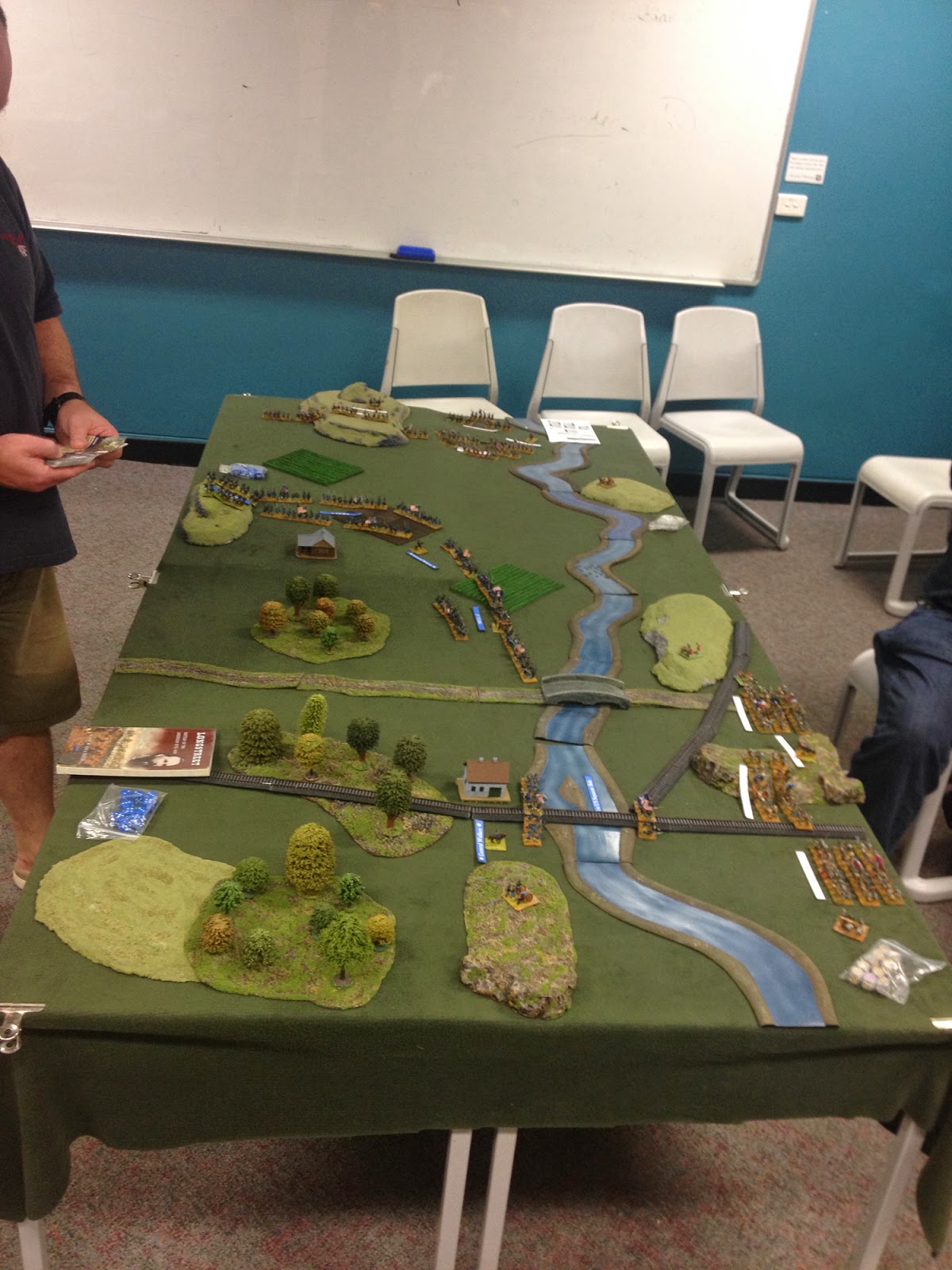 The Confederates prepare to attack across the river. 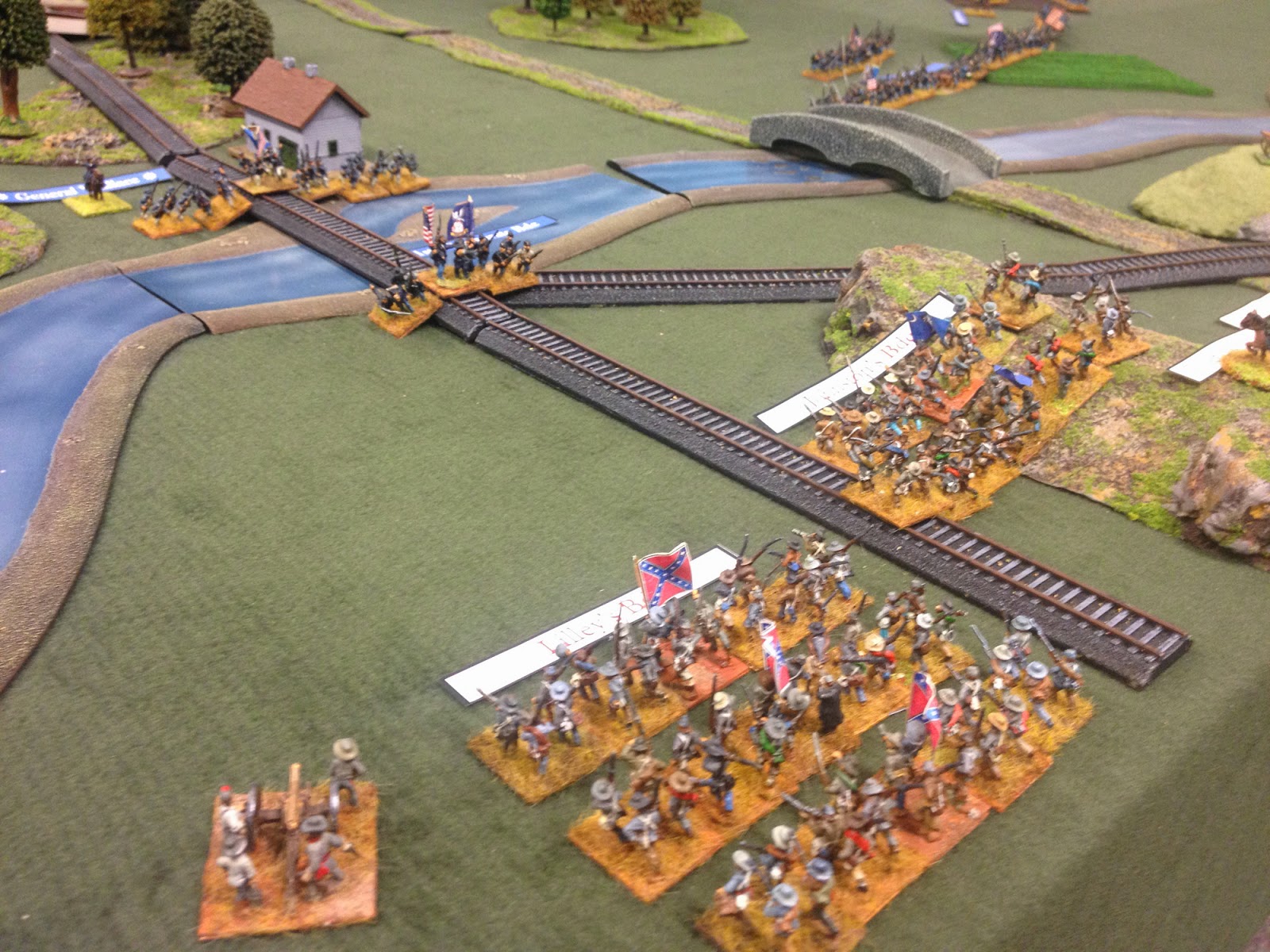 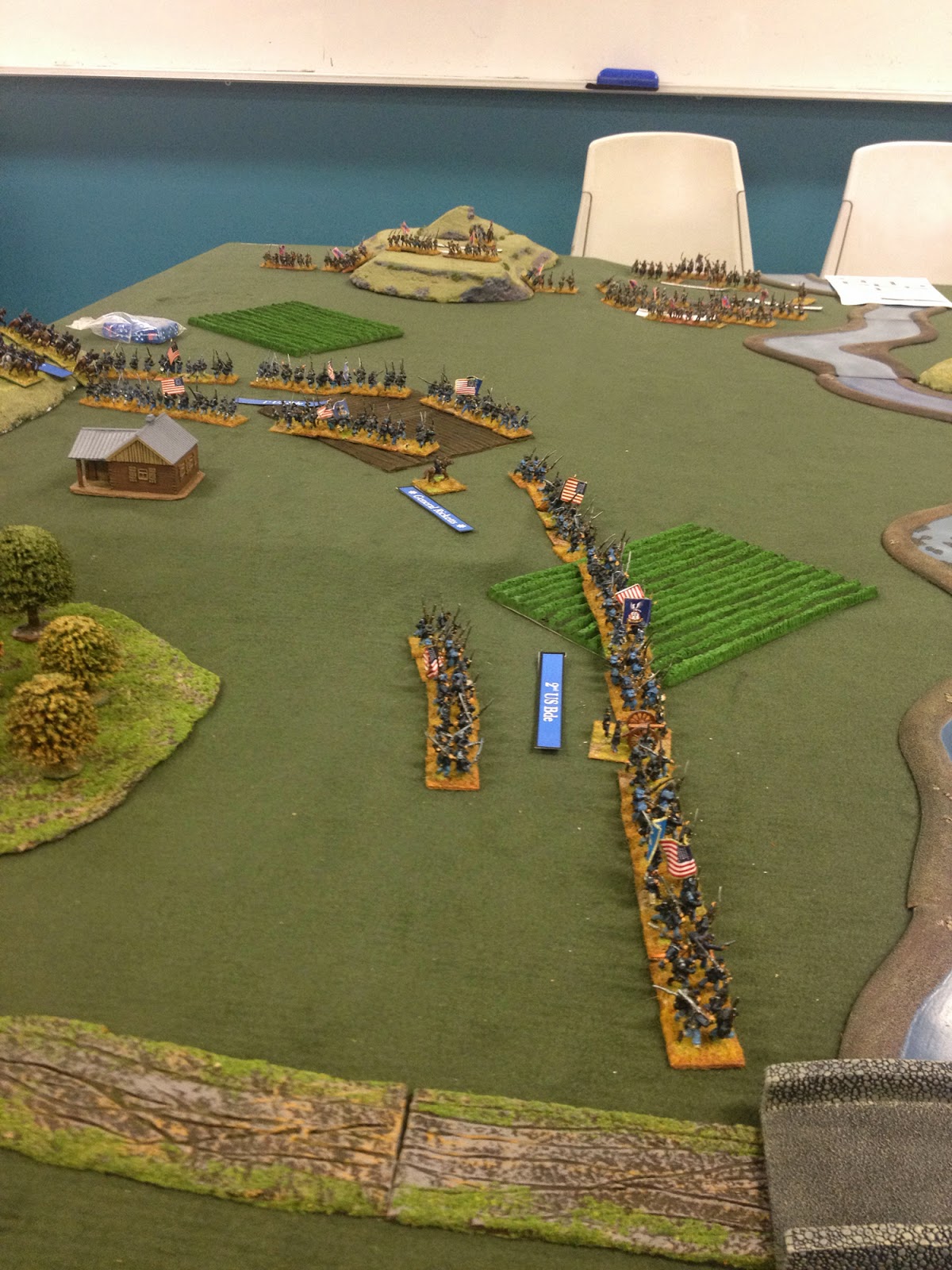 The Confederates had a large force of troops on the Union side of the river. The Union had to decide how many troops to leave in position to meet this threat and how many to divert to the bridge and ford. 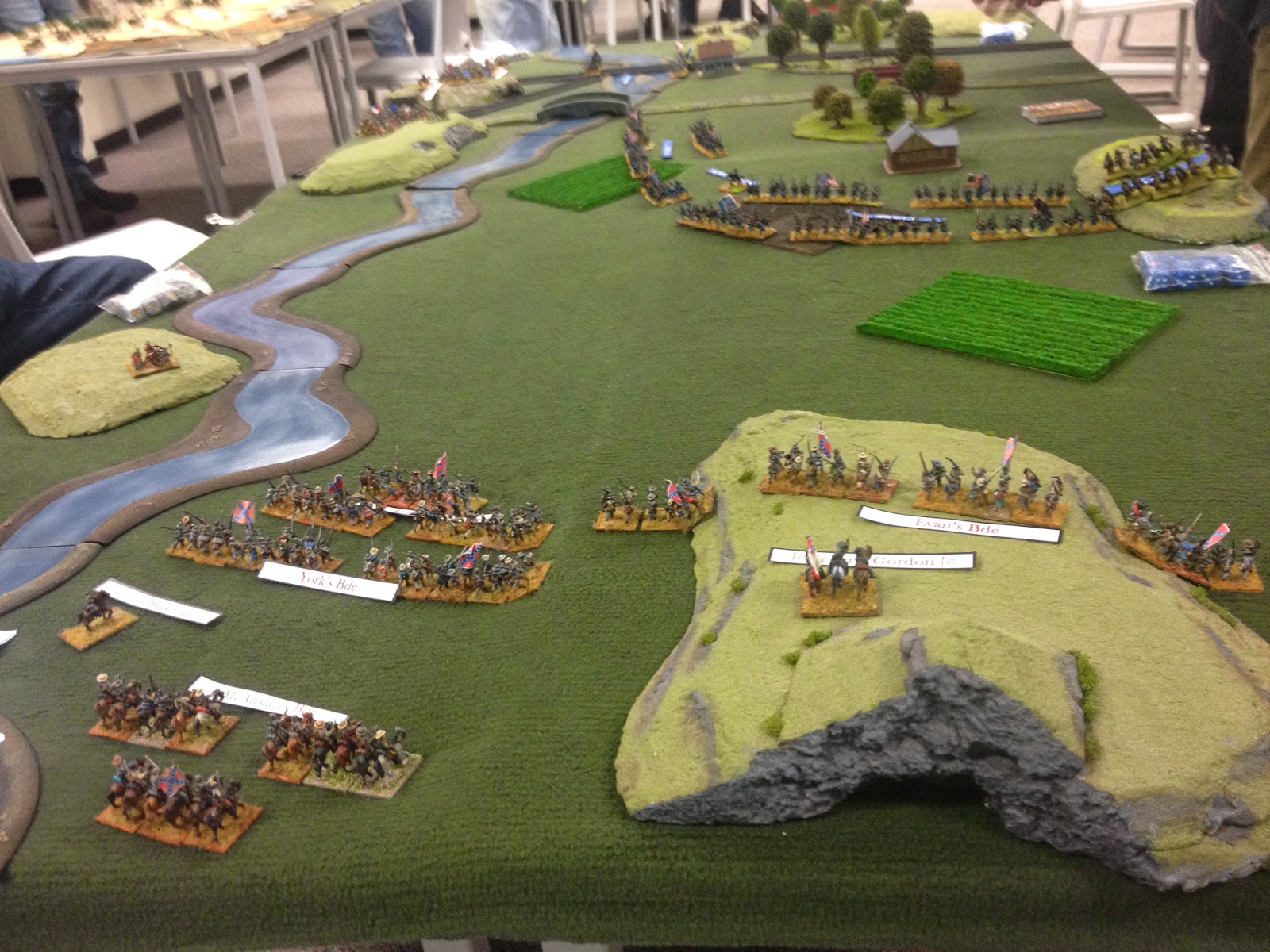 The Union marched a fair number of their troops to meet the Confederate attack across the river. 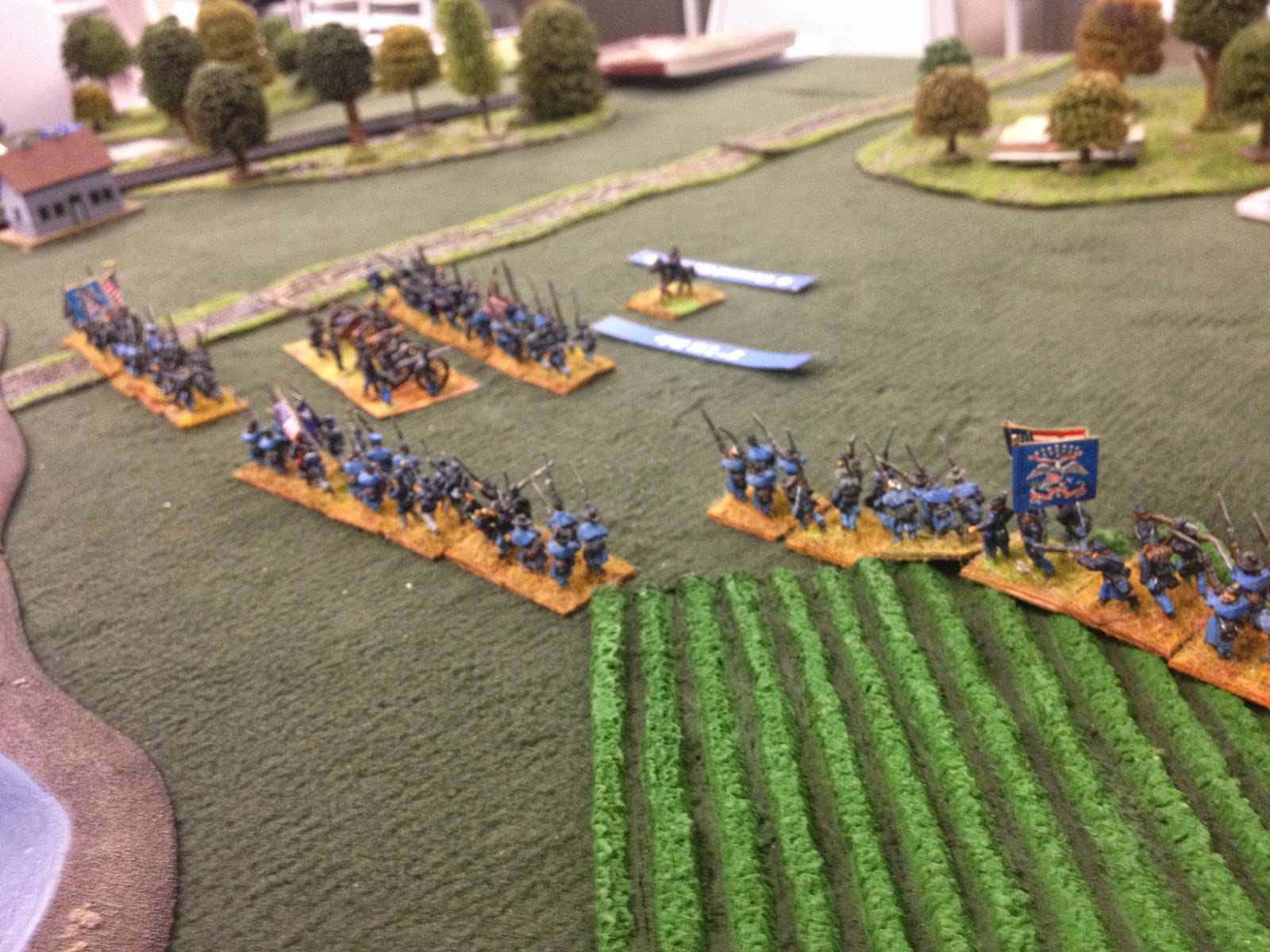 This was worth doing, as the troops they had defending the bridge were significantly outnumbered. 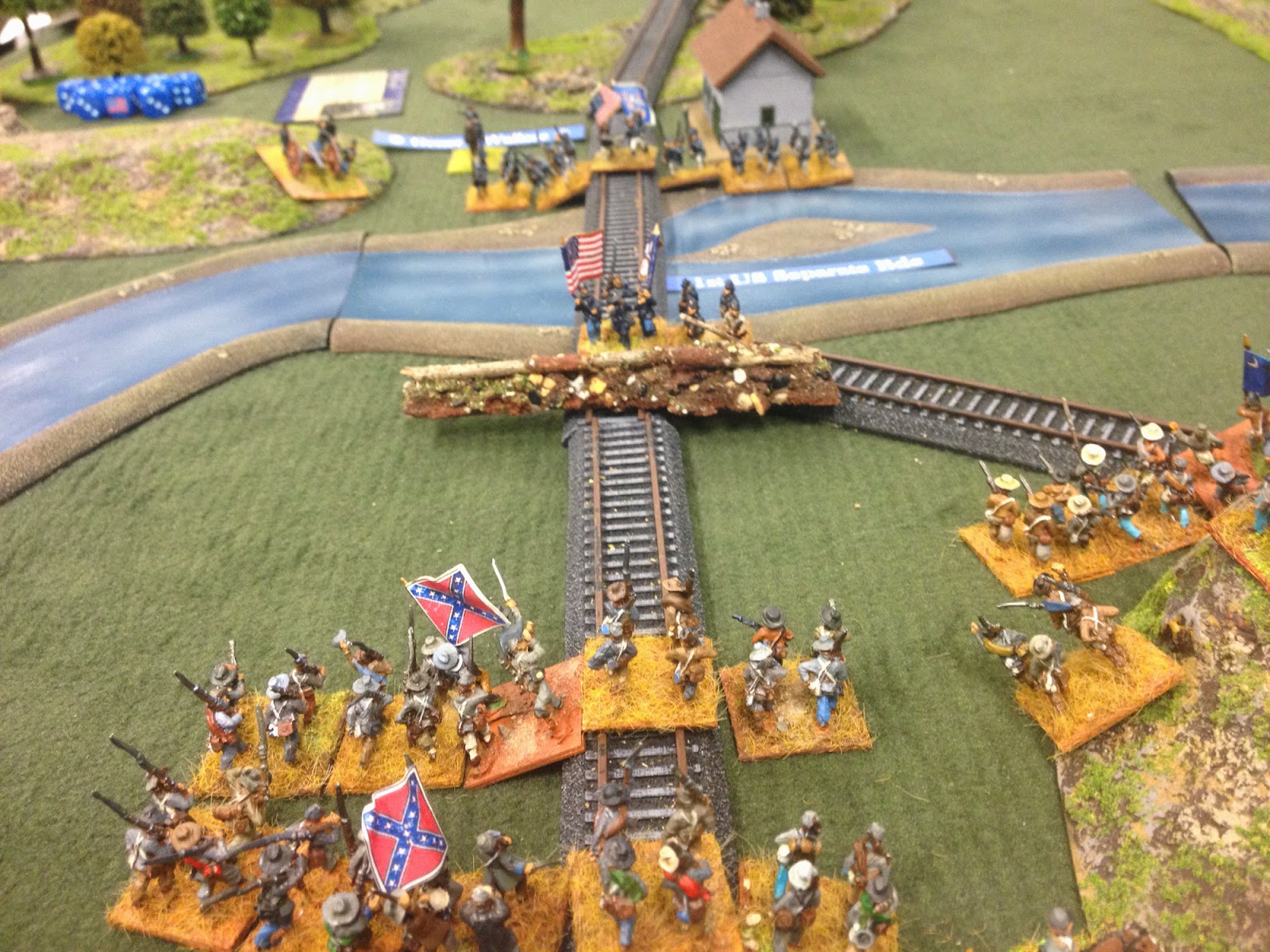 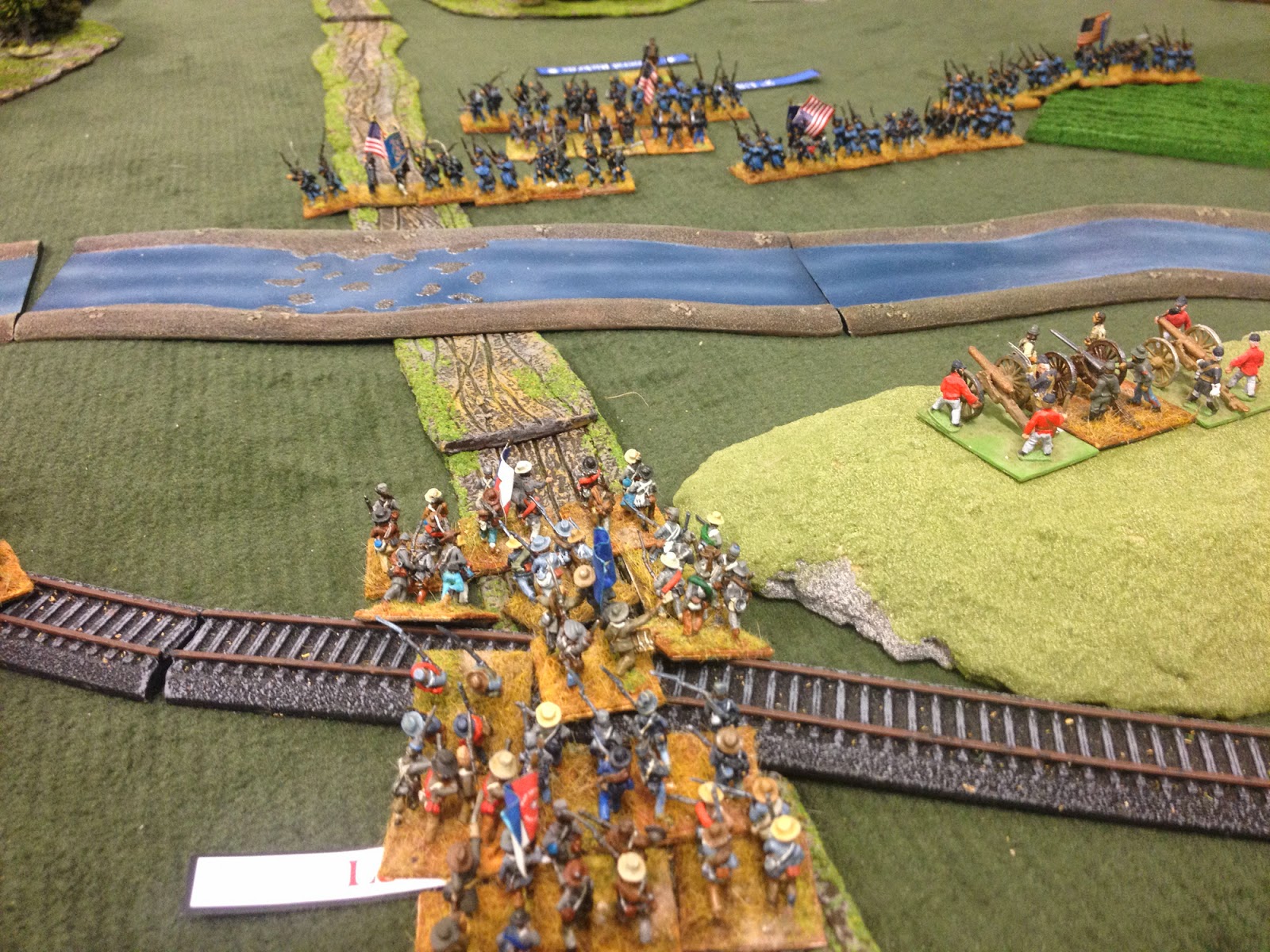 Meanwhile the main Confederate force launched a rapid attack in order to tie up as much of the Union force as it could. 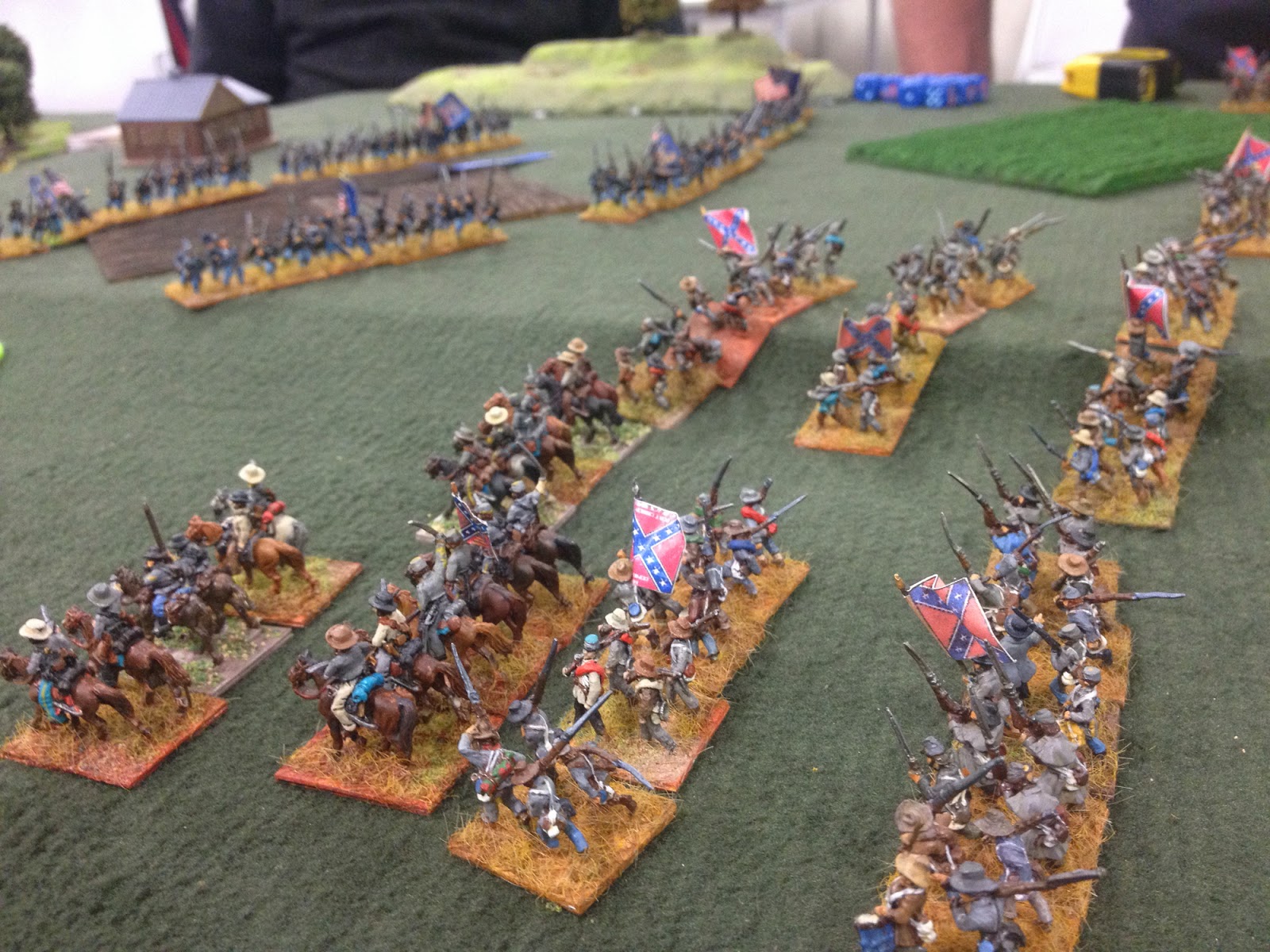 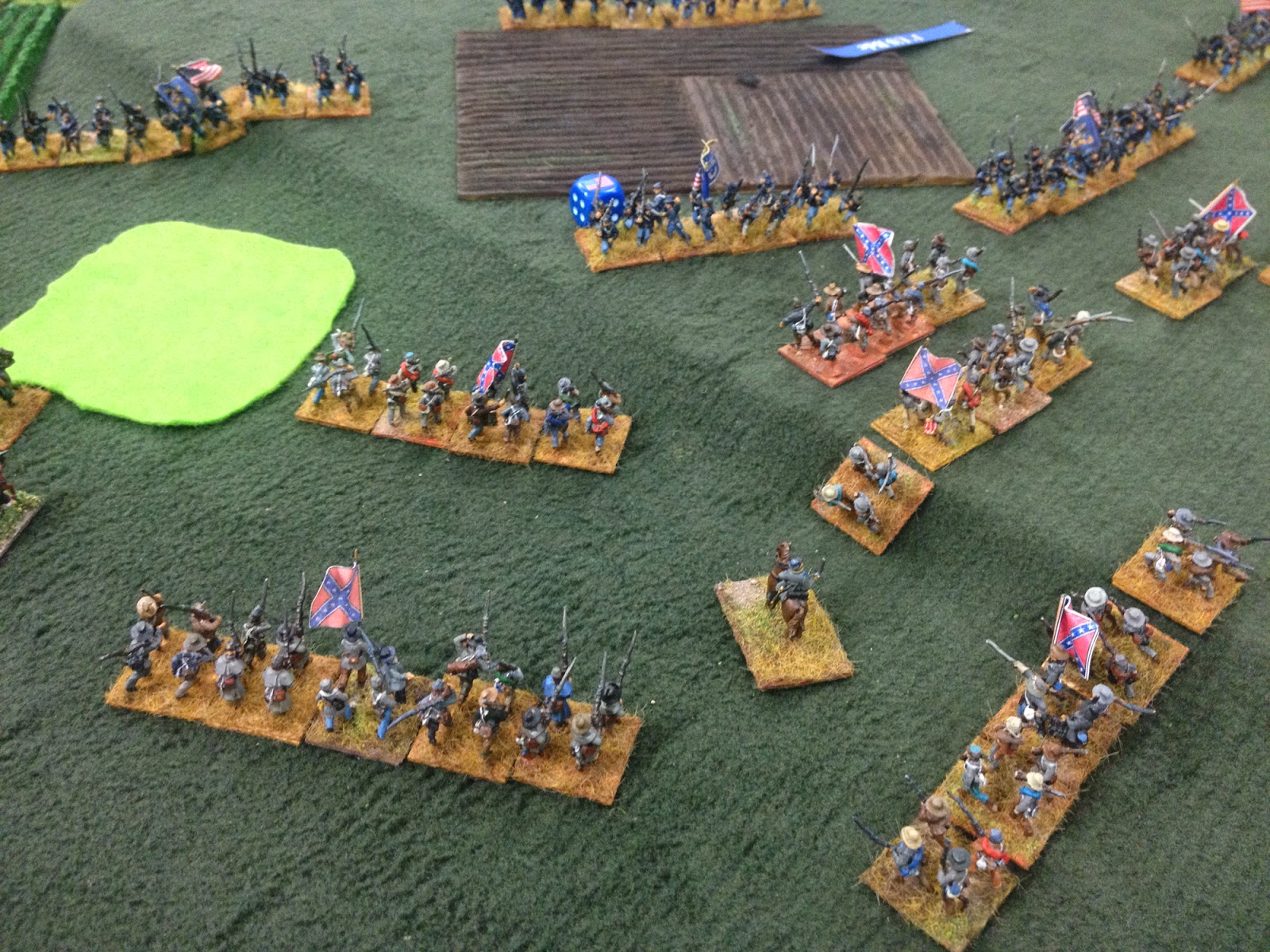 And as the battle really got going I seemed to have stopped taking pictures ...

We ran out of time as the Confederate attack broke against the Union line, unlikely to force much of a breakthrough. There seemed to be a fair attack developing against the river crossings, however, and both sides were taking plenty of casualties. It would be touch and go who would reach their shatter-point first, so I guess we could call it a draw.

The biggest problem we had with this game was that most of the players hadn't played it before. So it was not only a large scenario to fit into an evening, but had a steep learning curve. Add in the fact that we played some of the multi-player rules incorrectly for part of the game, leading to some confusion about who could do what, and it was obvious that we'd be unlikely to finish it on time.

I still don't know if I actually like Longstreet. The core mechanisms are simple enough, but I'm beginning to wonder if they could be used to create a cardless game; it's the card-management that seems to cause the delay and confusion. Yes, they add a little friction and uncertainty as well, but maybe that can be created some other way. It's fine for one-on-one play, but then that limits you to games with a brigade a side. Perhaps Longstreet is too ambitious for a battle of this size; we fudged it into five commands, but in fact there were ten to twelve brigades on each side. Simply put, I don't think that Longstreet, straight out of the box, is the ACW game I'm looking for.

Thanks to Caesar and Ralph for setting up the game, and keeping it running as smoothly as possible, in the face of considerable adversity at one point.

Meanwhile there was also a game of Flames of War, featuring these lovely Bishops ... 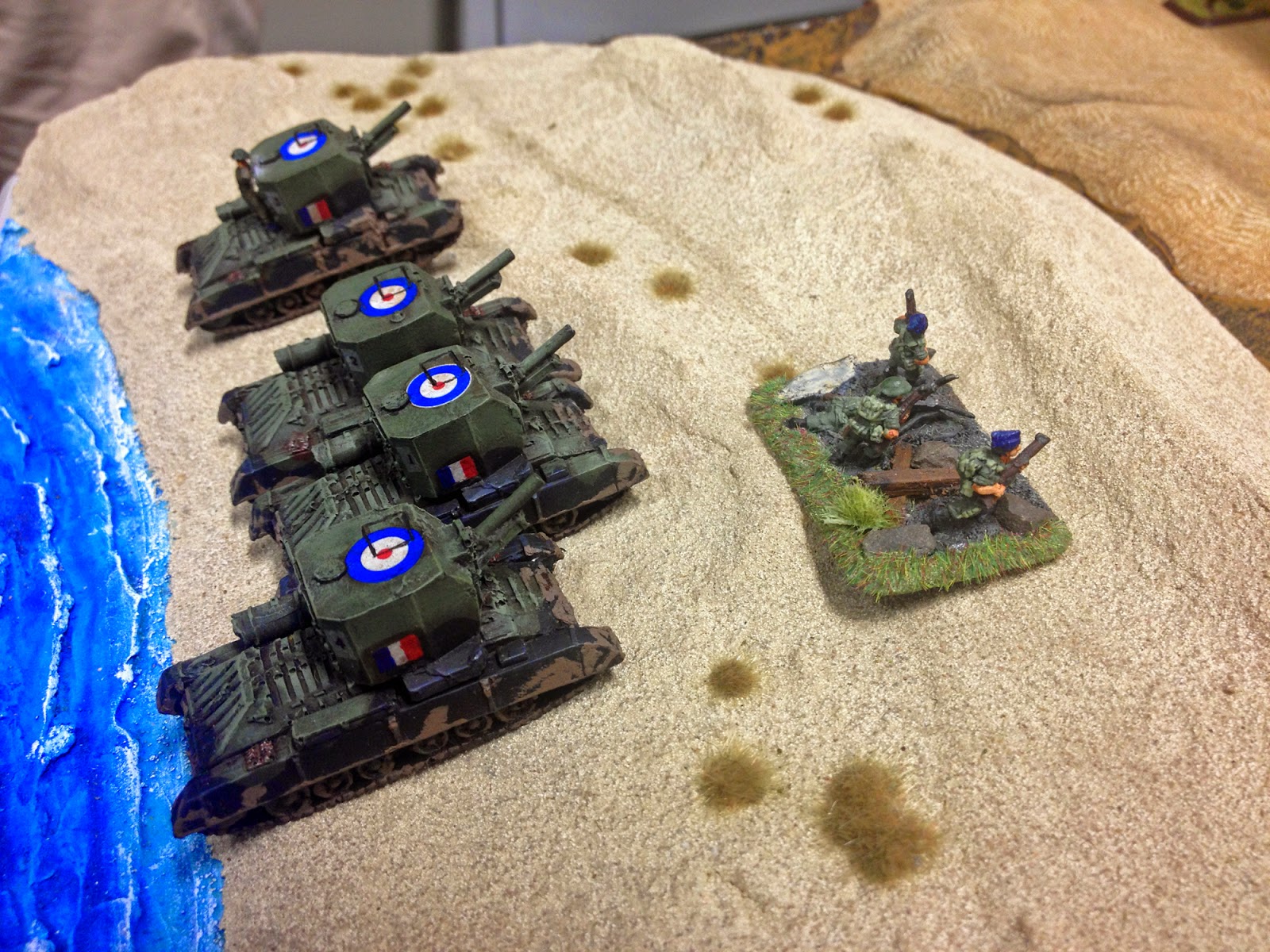 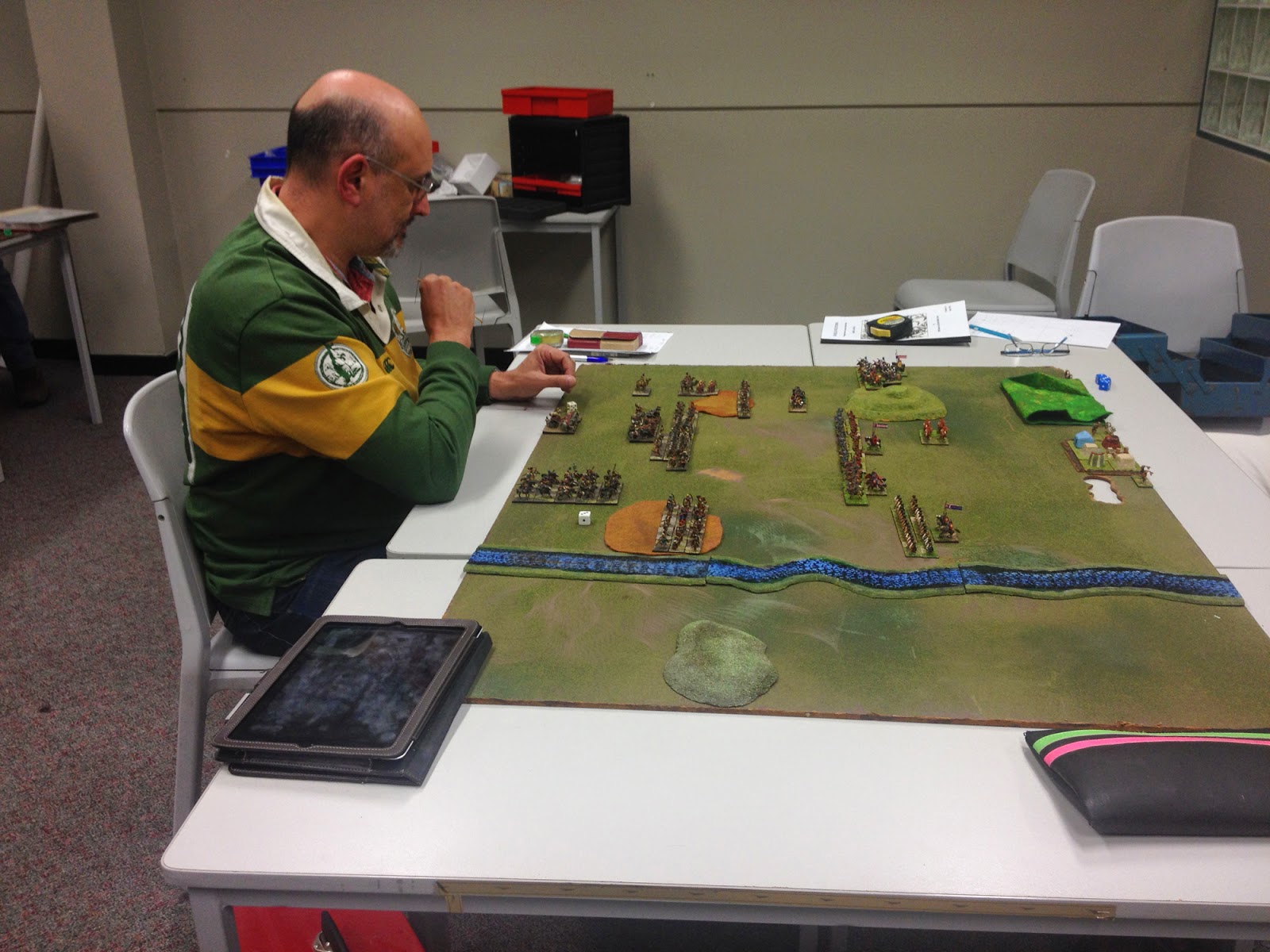 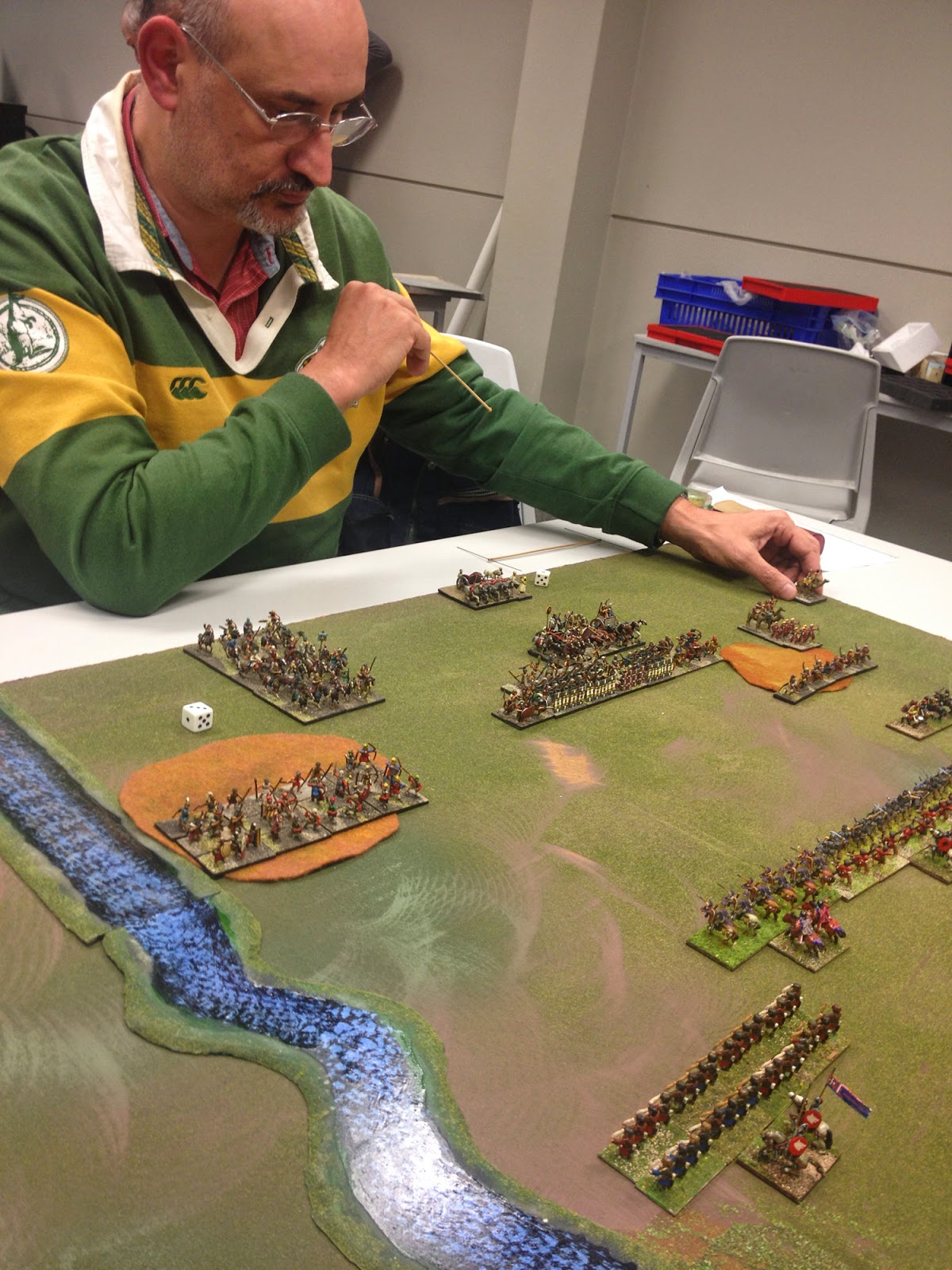 I'm back on the secret project next week, so pictures may be limited.
Posted by Kaptain Kobold at 09:22