Last night we played our biggest Maurice game so far - Malplaquet. Appropriate, as this was apparently the largest pre-Napoleonic battle fought in Europe.

With over 40 infantry and about 20 cavalry units, this really stretched our figure collections, so we drafted in everything we had - ImagiNations, SYW and GNW included.

We played it as a doubles game, with Ralph and I taking the Franco-Baviarians in their seemingly solid defensive positions, and John, Ulli and Naz running Malborough and Eugene's allies. Ulli and Naz were new to Maurice, so Caesar umpired and assisted.

Here's the batlefield gridded out, set up and with the French deployed. 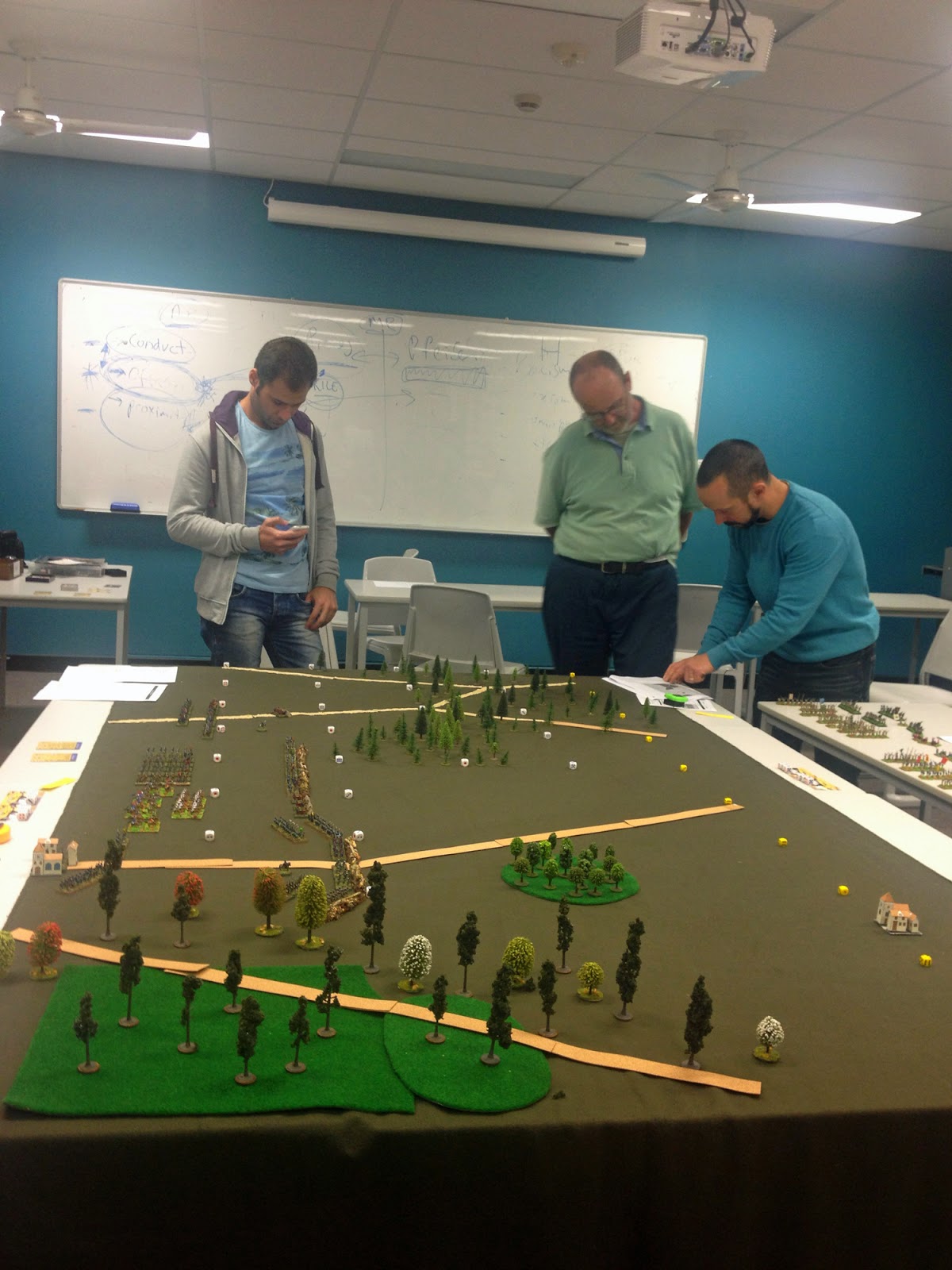 A closer look at the French lines. 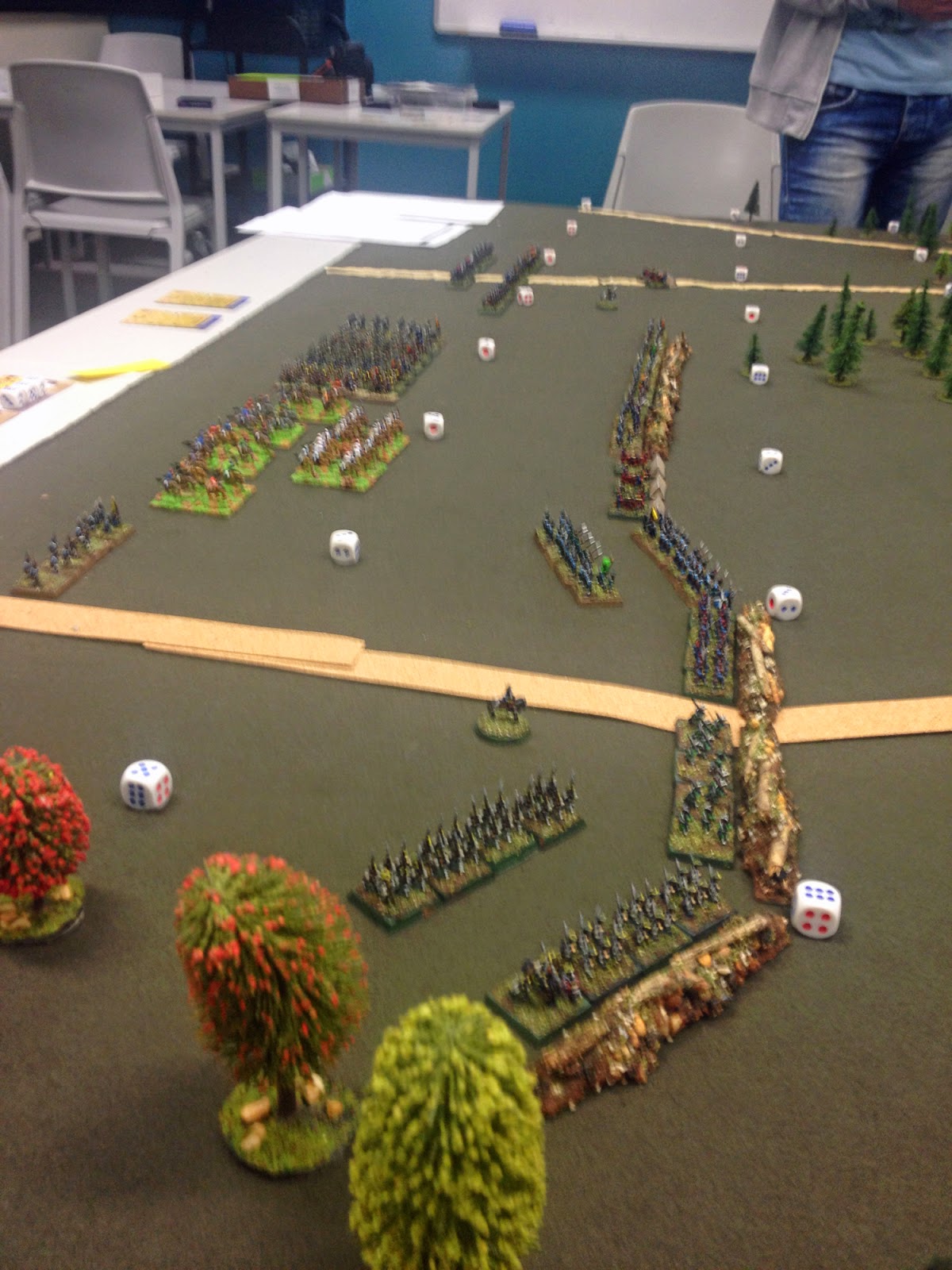 My cavalry. As I said, we drafted in all available units, so most of my force was made up of some geographically displaced Cossacks. 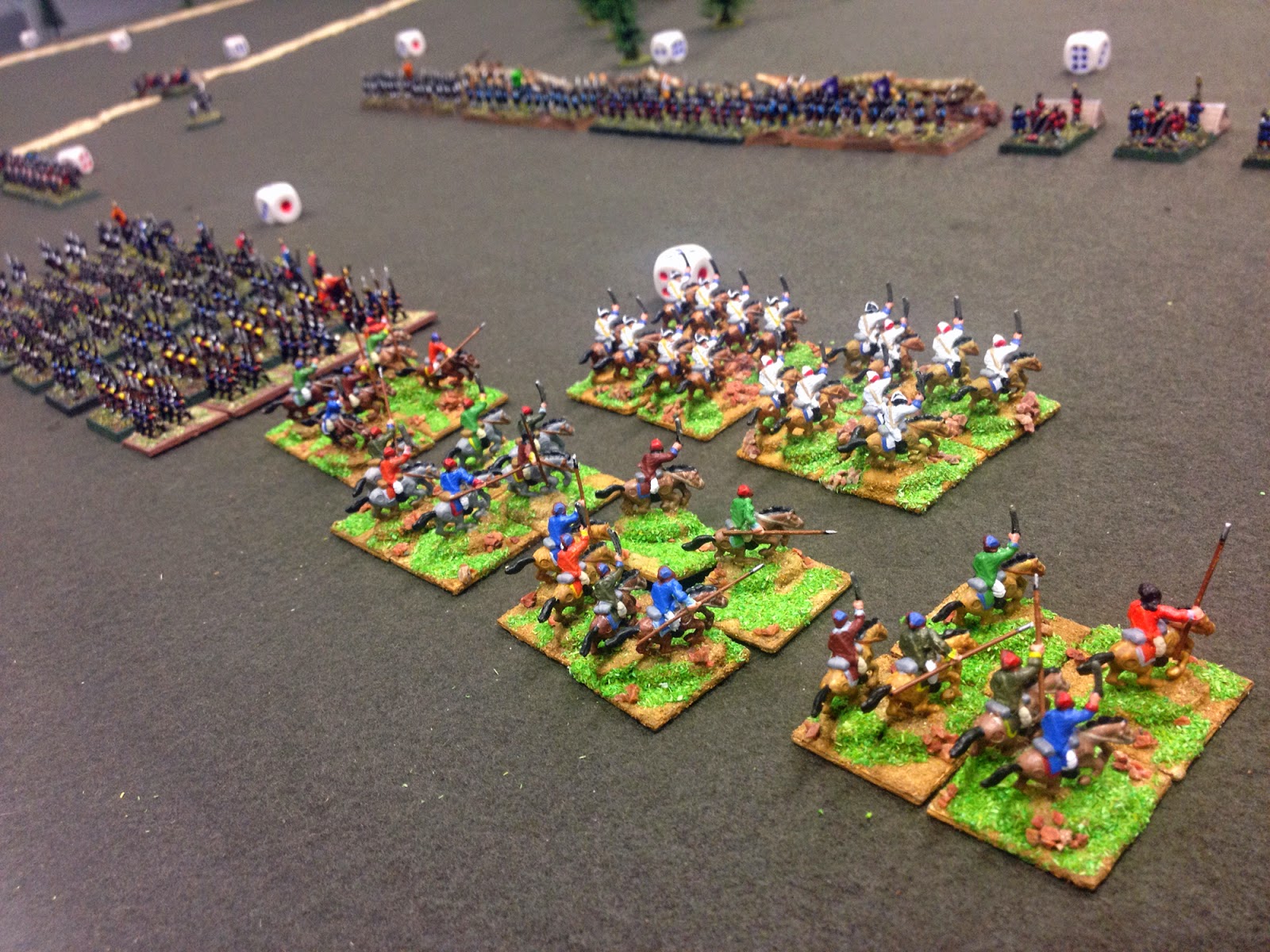 The Allies made their major attack on our left, moving the bulk of their force through the woods. 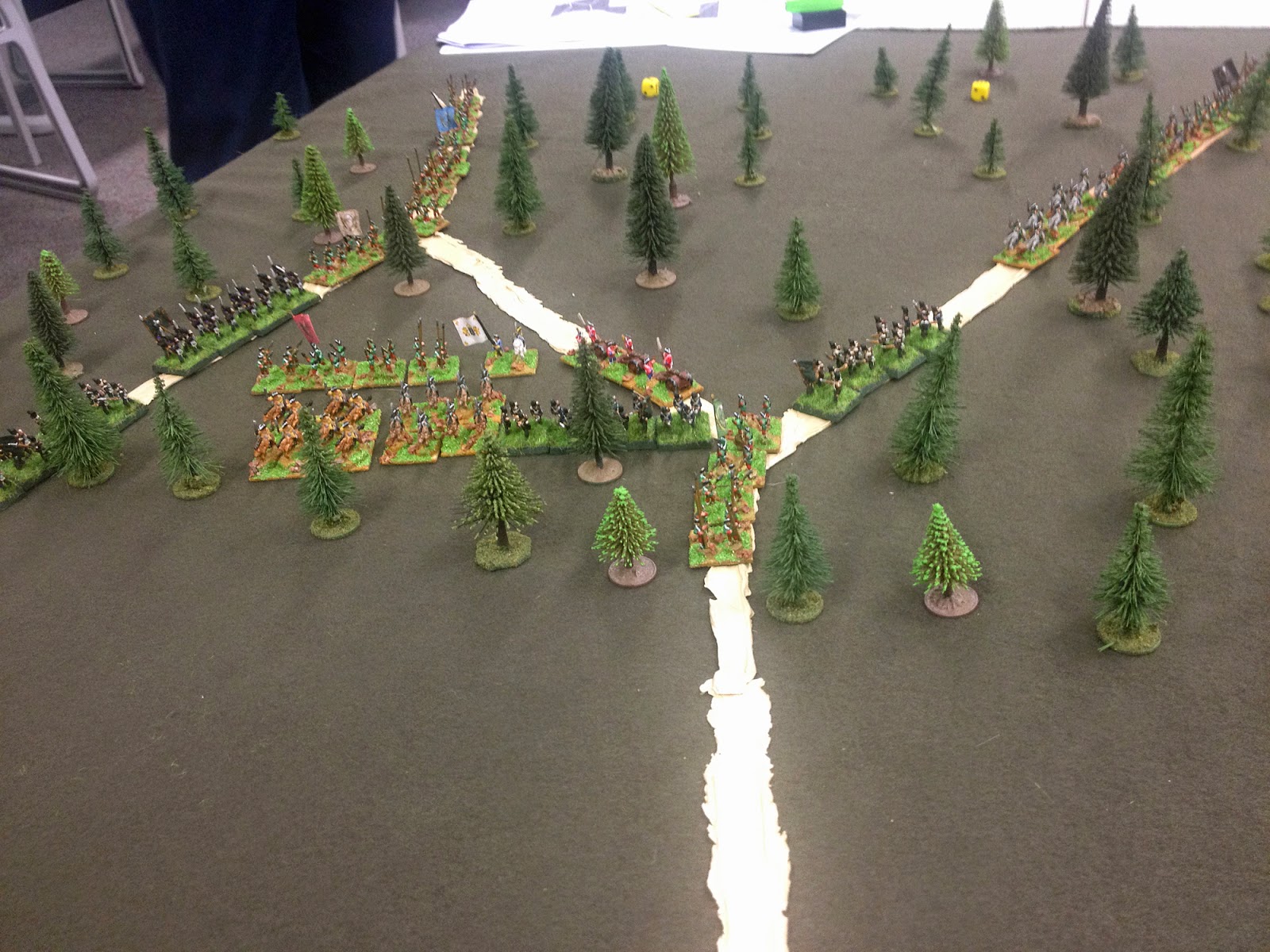 John's troops held back, starting as they did a fair way from the French lines. 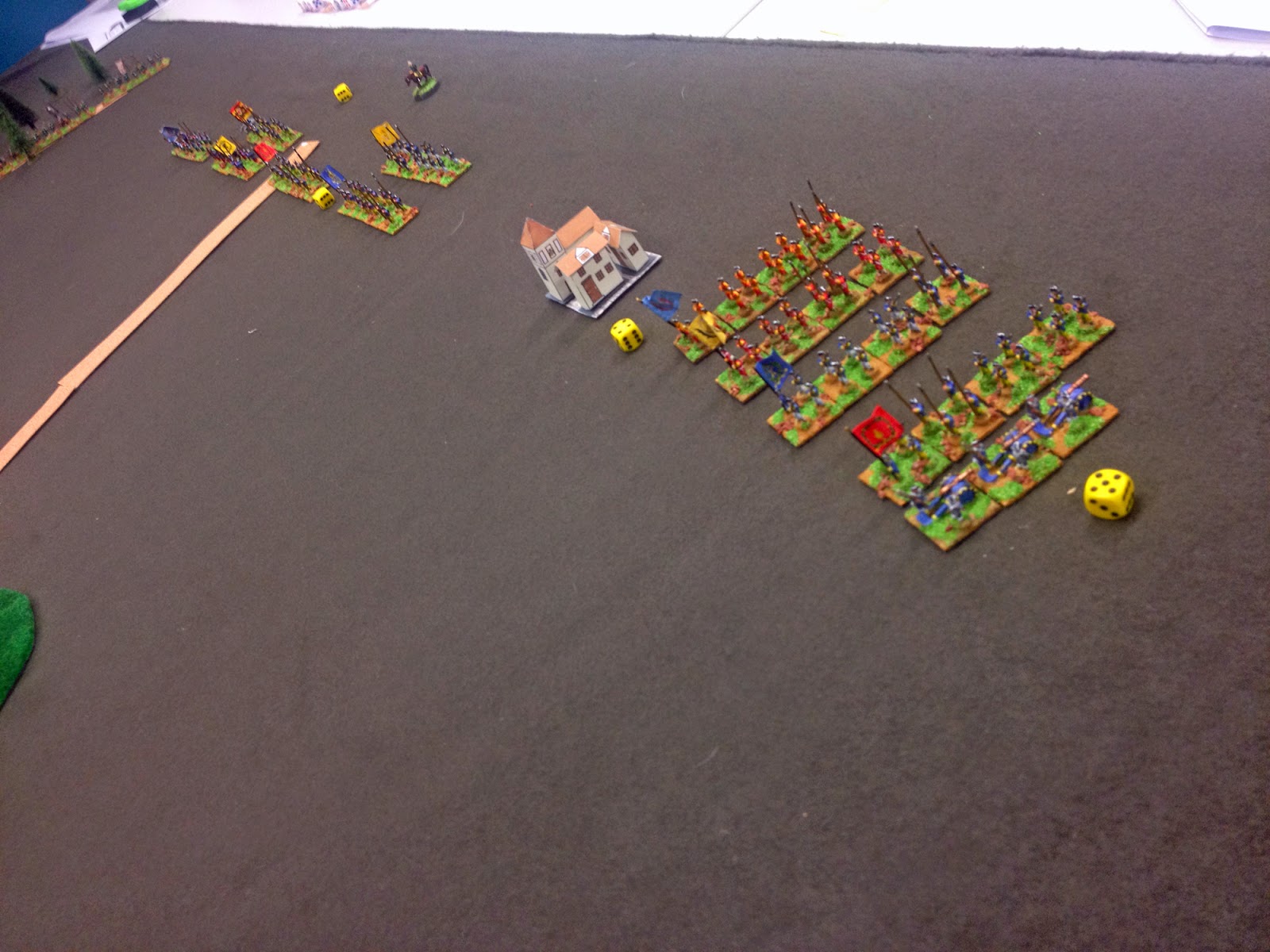 There really were a considerable number of troops moving through the woods. 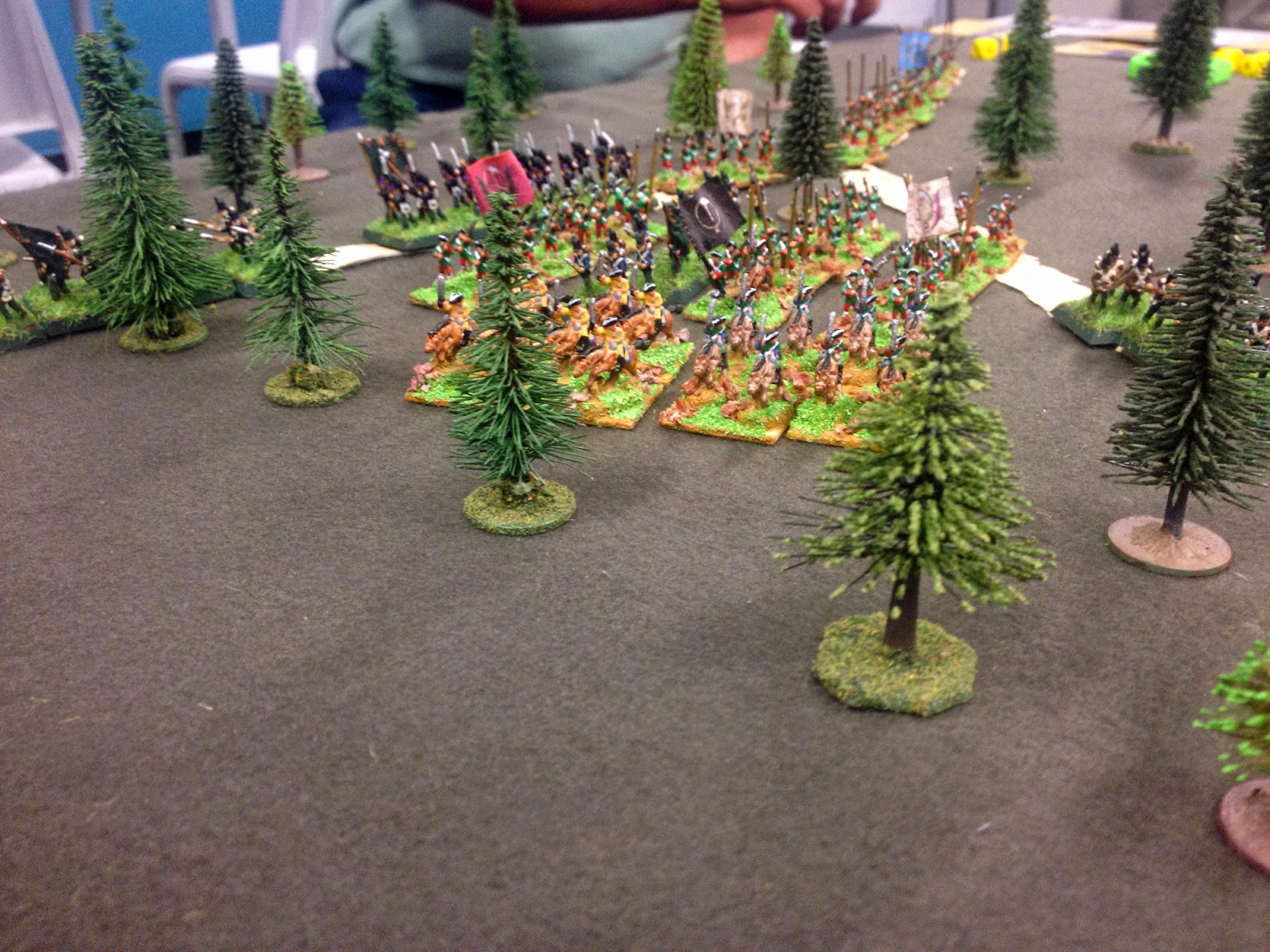 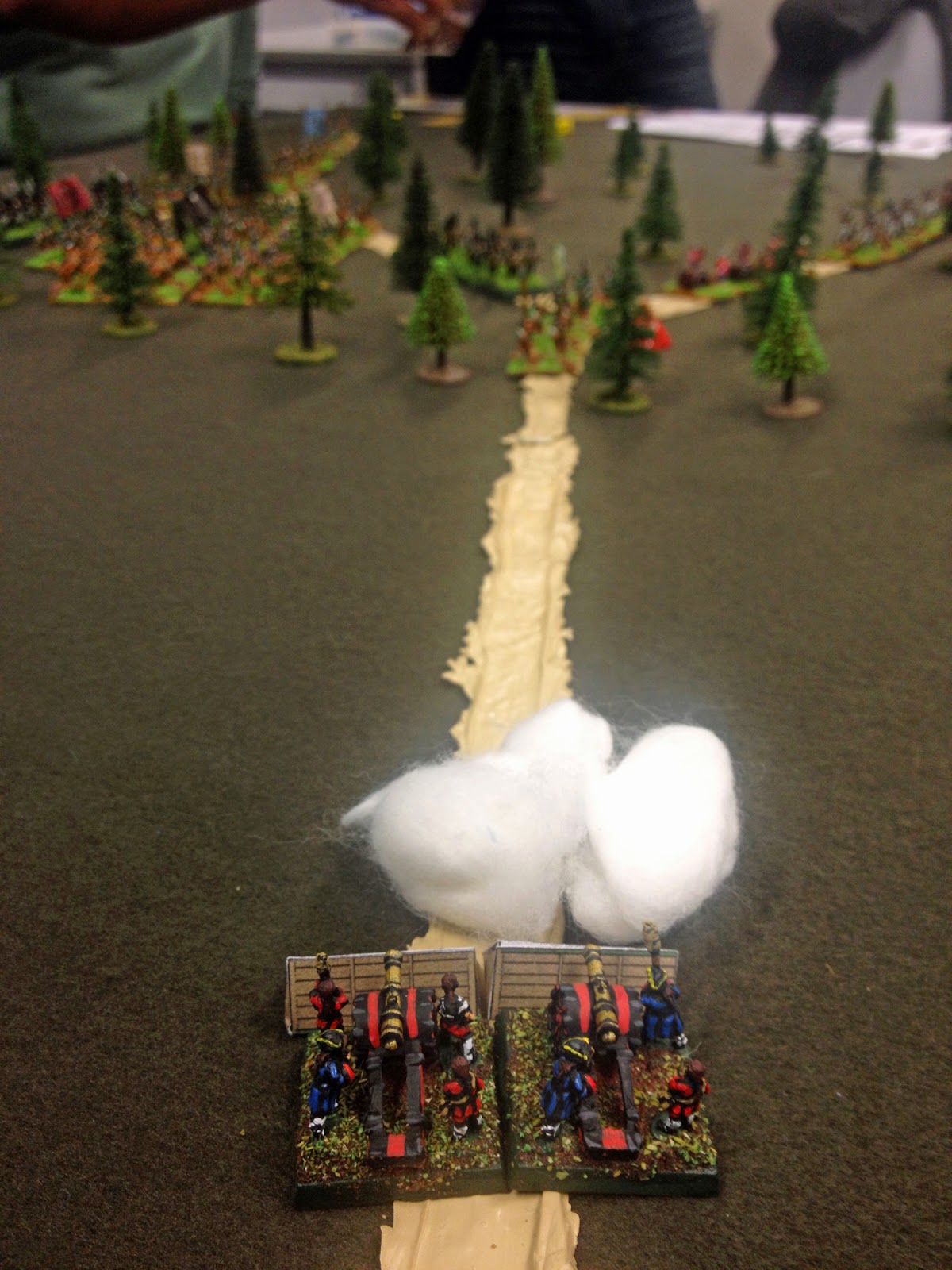 The Allies emerge and begin to deploy. Ralph and I watched, whilst discussing whether to send his infantry reserve or my cavalry reserve to deal with them. With hindsight we might have done better to have sent one of them rather than actually just talk about it. 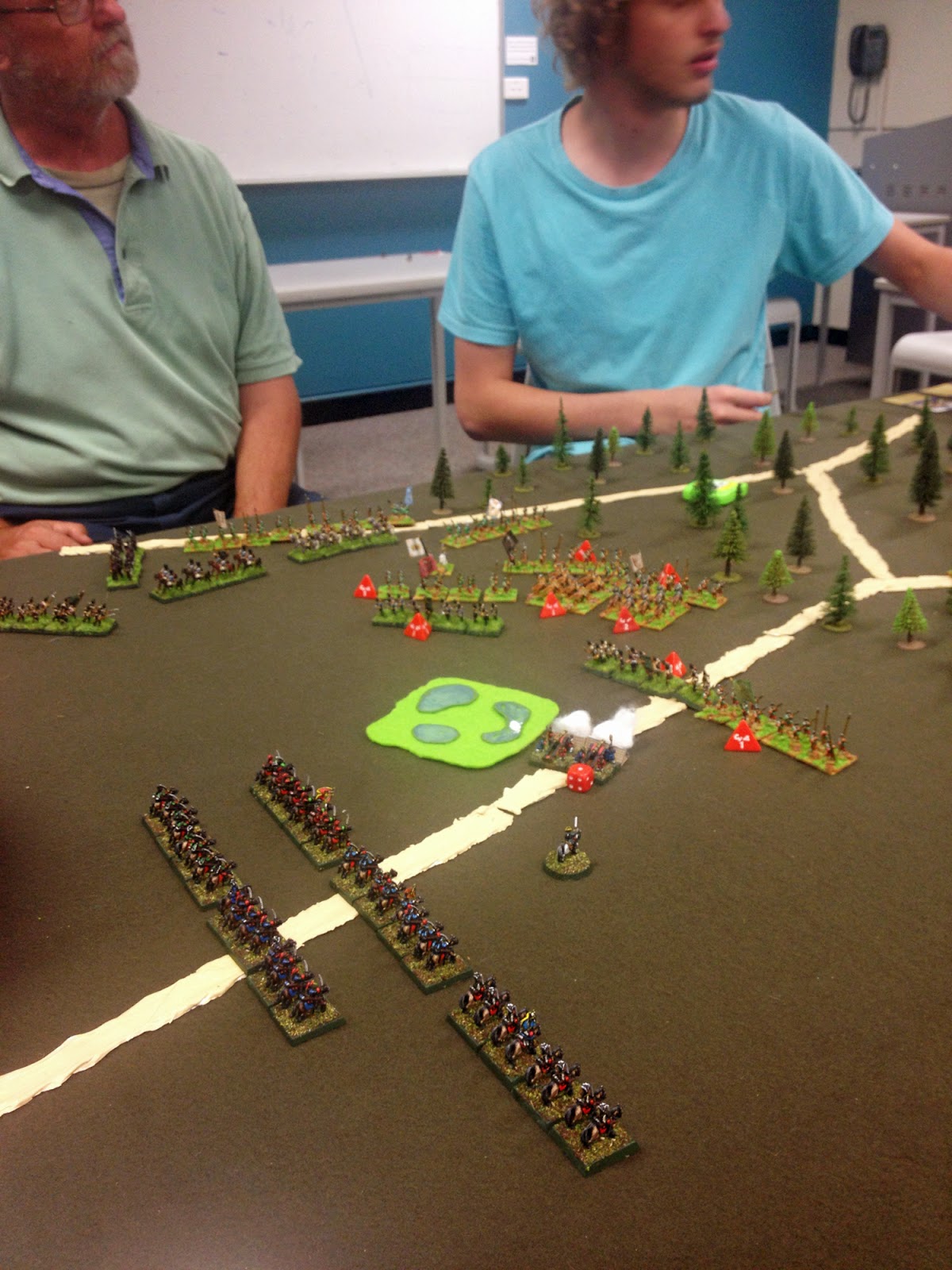 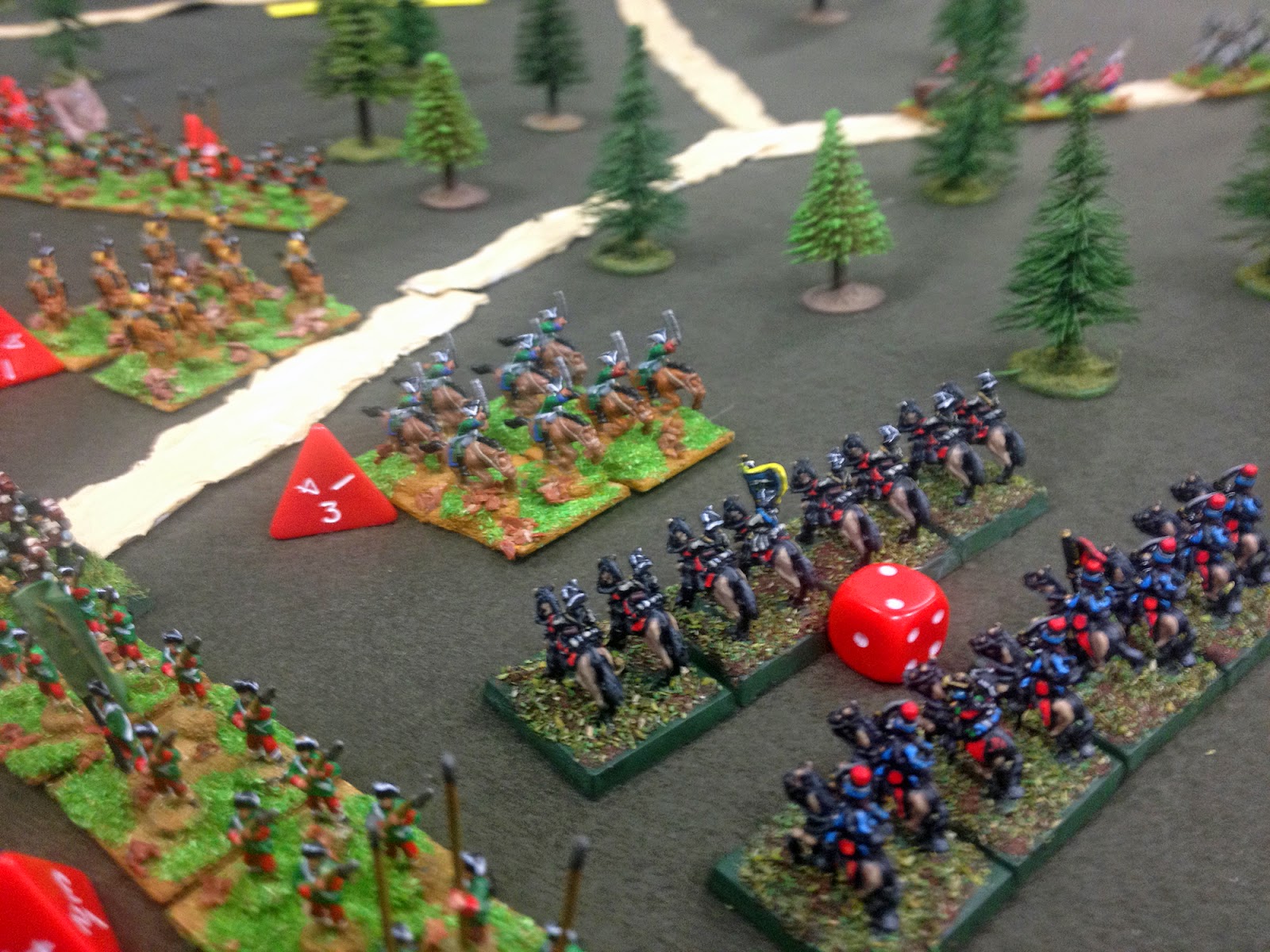 But then with more success. 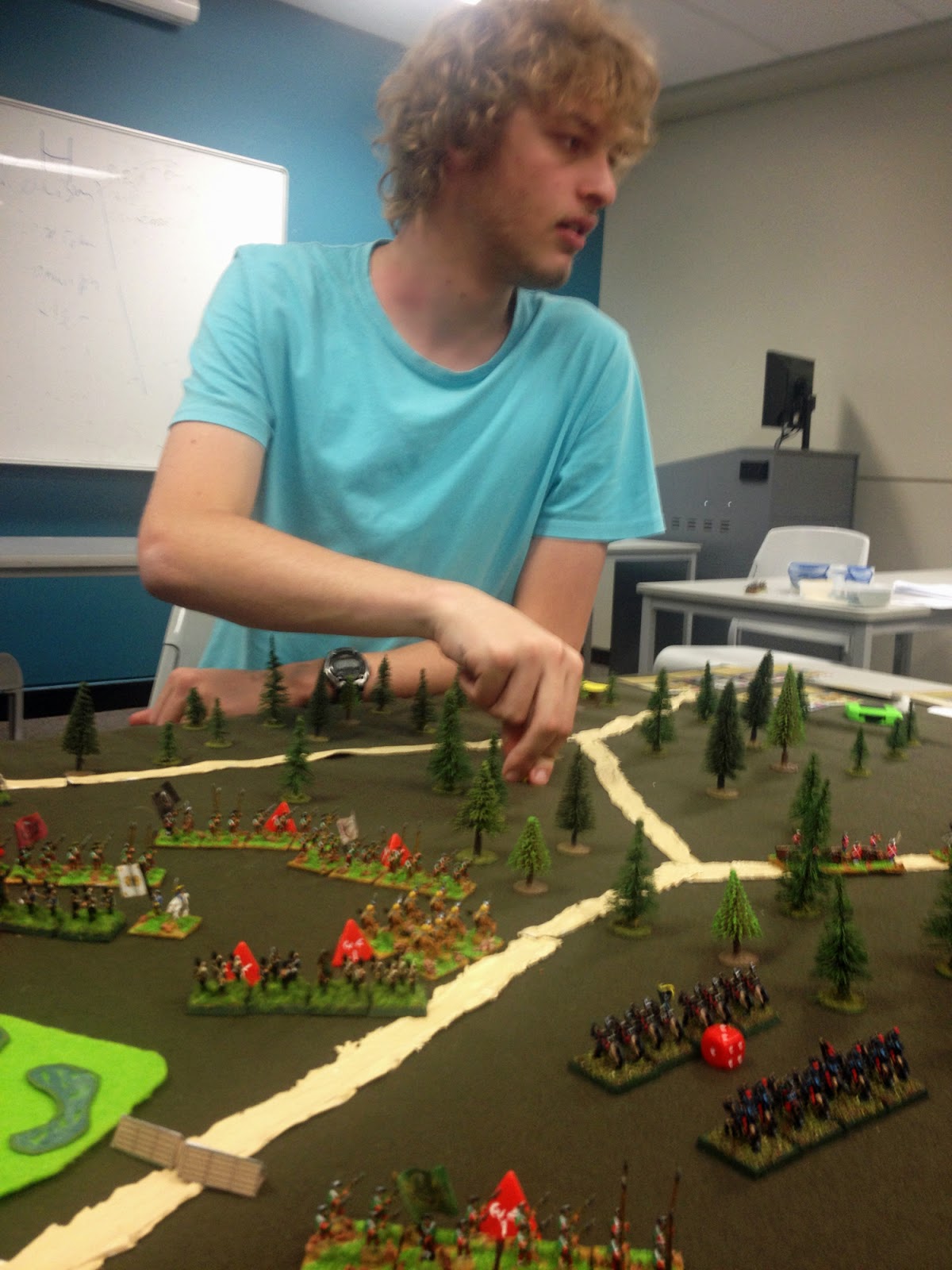 Meanwhile John was moving some infantry up against our extreme right. 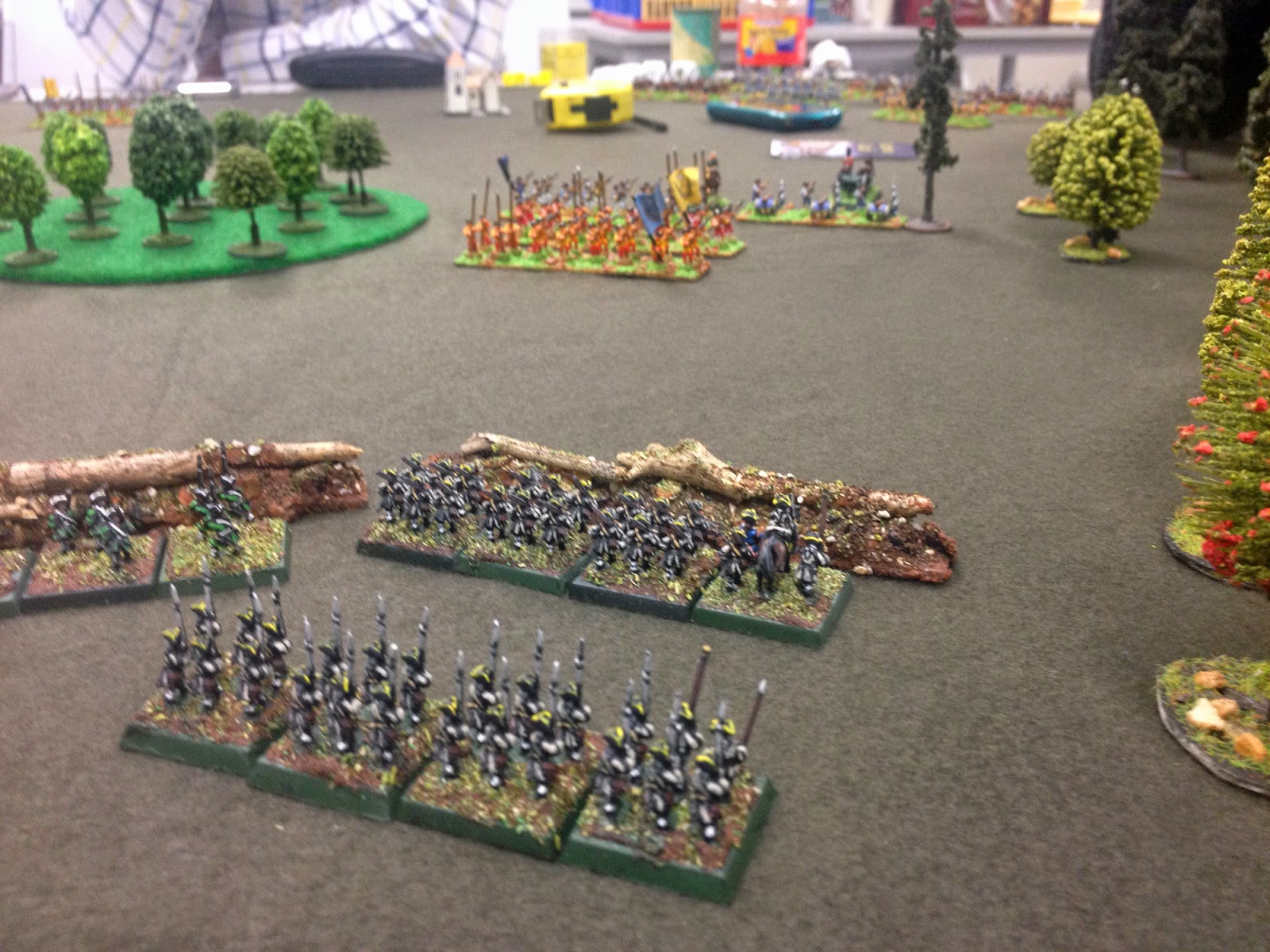 The initial exchange of volleys saw the French take heavy casualties, despite their defences. 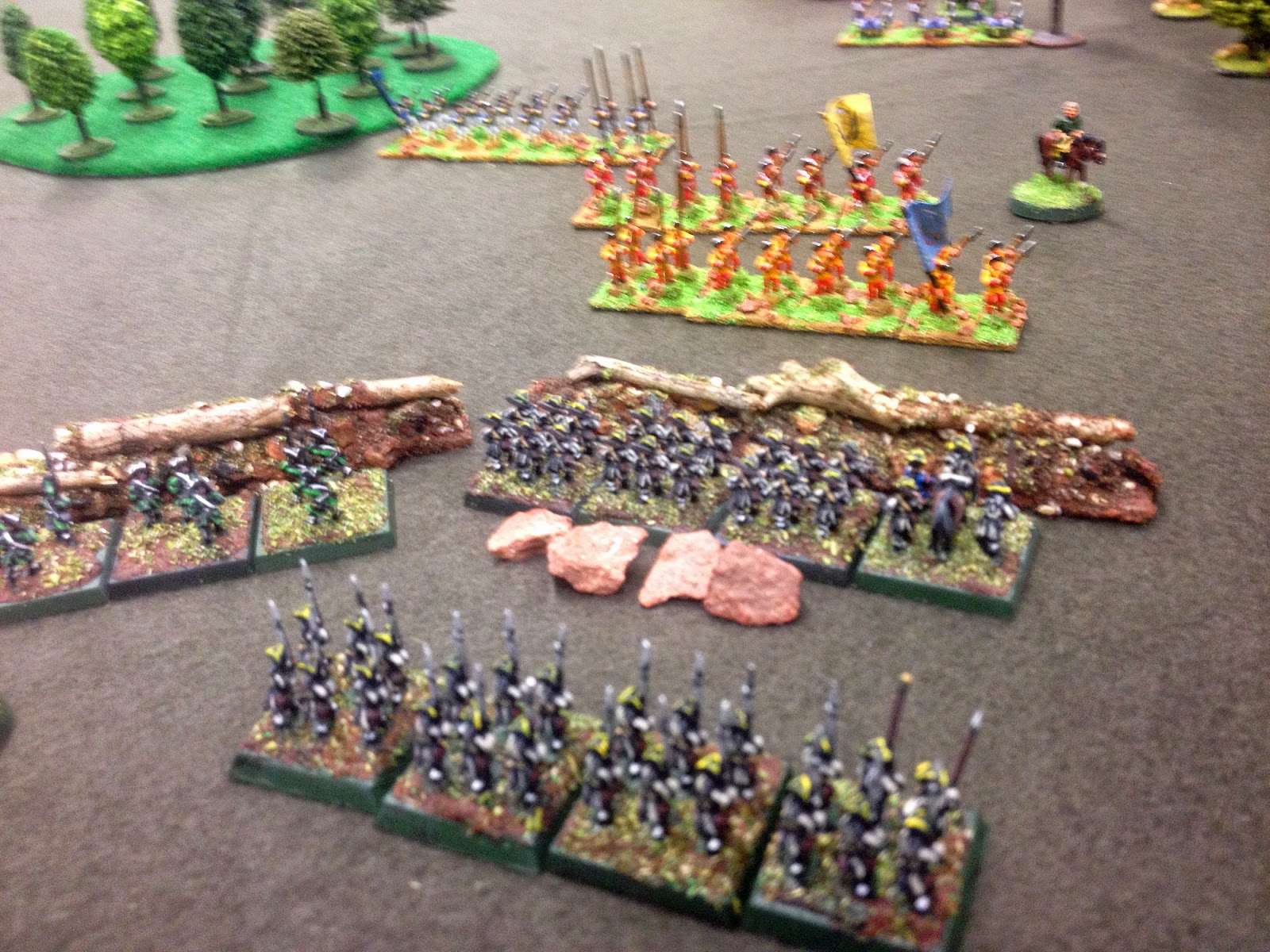 The elite English (we think) then fixed bayonets and charged, pushing us out of the defences, and breaching our lines. 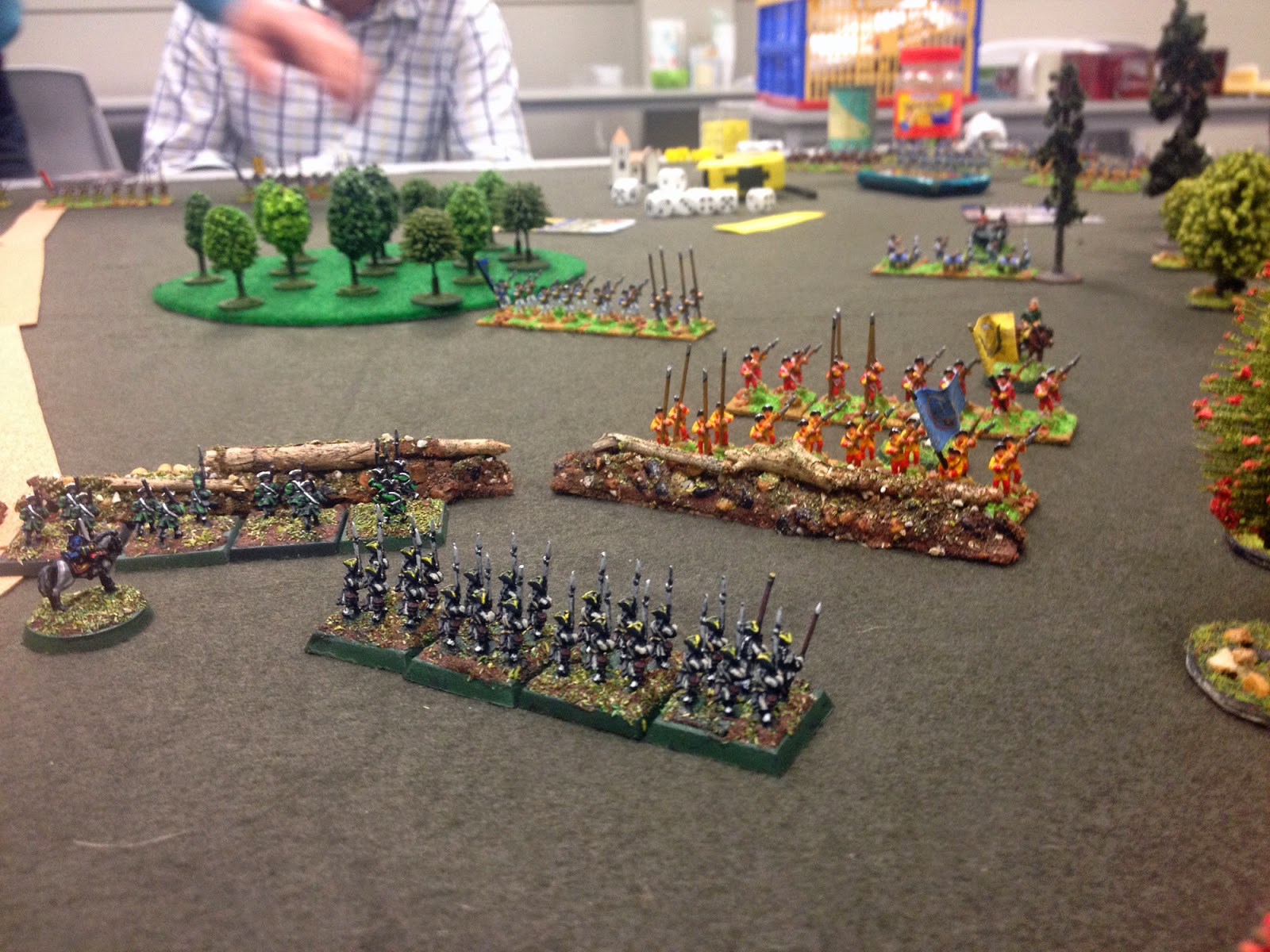 Meanwhile on the other flank the French were busy sorting out the mess their cavalry had got into, whilst their infantry sat in tasy vulnerable columns. 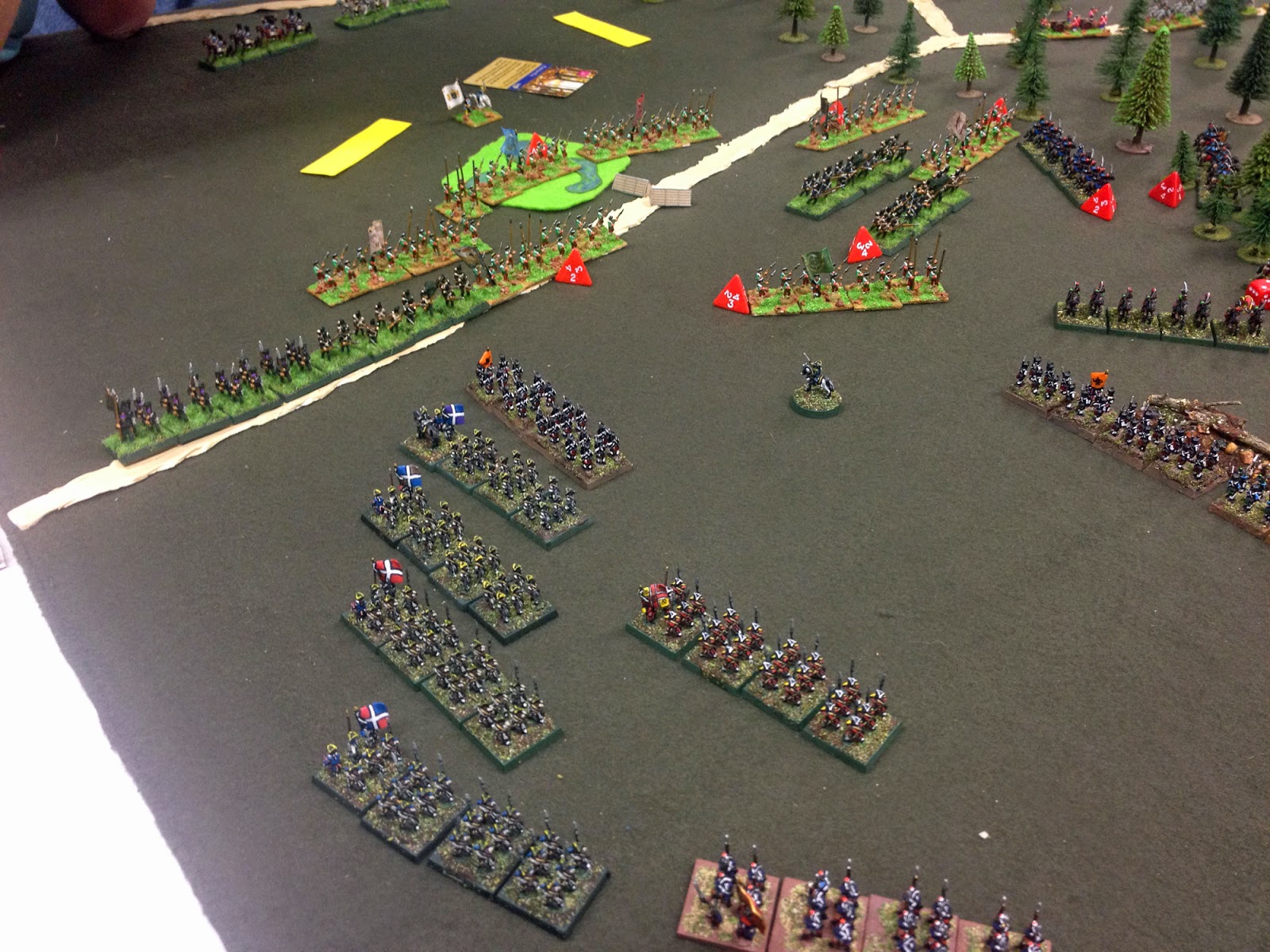 Mercifully we had to call time at that point; with learners and a lengthy set-up the game just couldn't be played to a conclusion in an evening. Both French flanks were under pressure, and I'm not really sure how we could have pulled off a stunning victory based on the position we were in. So, regardless of what others might think, I have to say that we were looking at an Allied victory.

Thanks to Caesar for organising a game that looked absolutely spectacular. In a few weeks we're looking to play some 'normal' sized games, and it will be interesting to see how the experience we've gained from these larger ones comes into play.

Useless Trivia: Malplaquet is one of the few battles specifically mentioned in the Sherlock Holmes stories. In terms of field battles (so discounting sieges in the Indian Mutiny) I think that there are three others - Waterloo, Marengo and, of course, Maiwand. But I'm doing it from memory; there may be others.