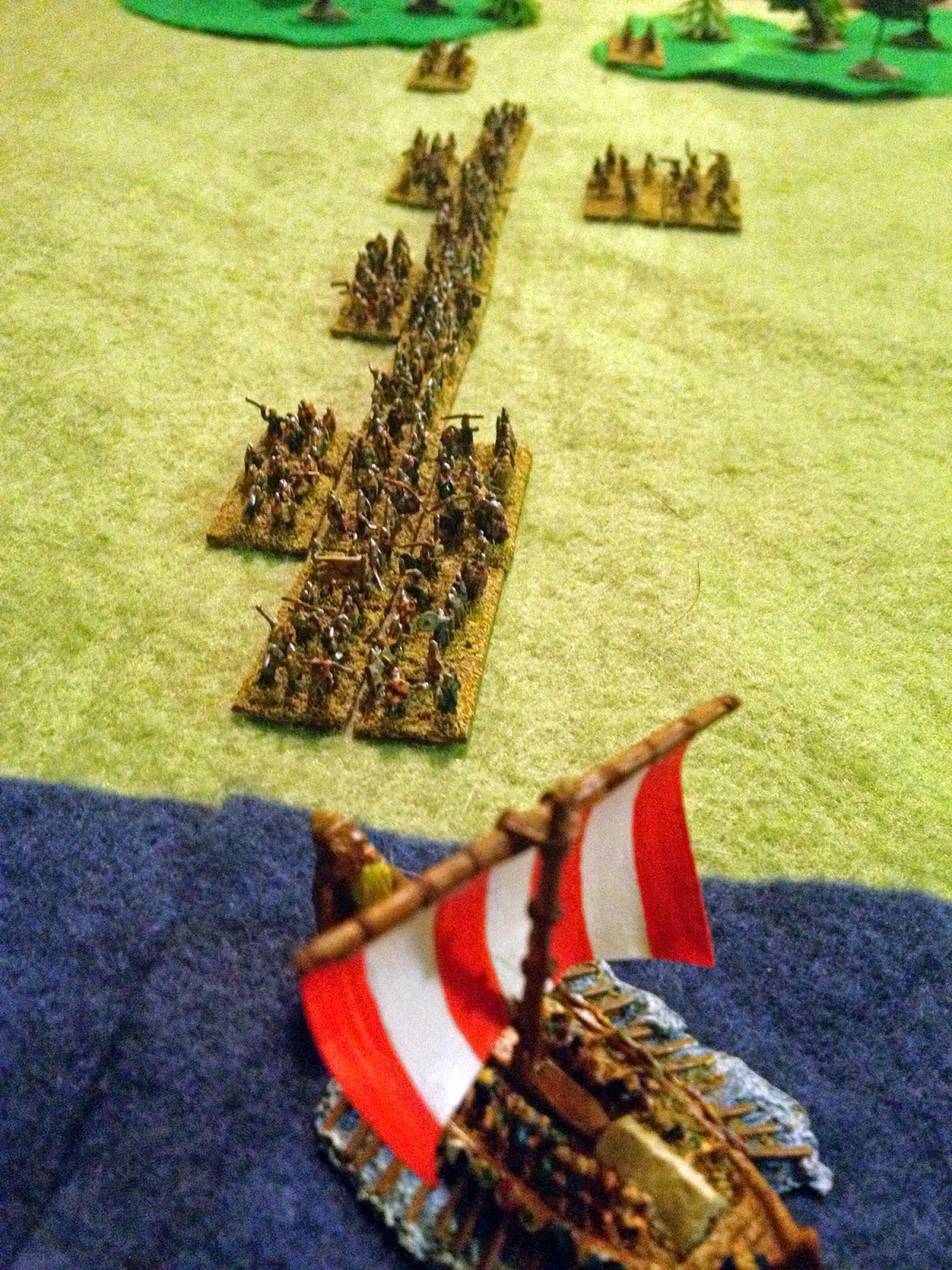 On the train  to and from Sydney yesterday I was reading the Orkneyinga Saga (for no other reason than it was close to hand when I was looking for a book to read on the train). In it there's a reference - nothing more - to the Battle of Clontarf, in which Earl Sigurd of Orkney is slain by the curse of his own magical raven banner, which brought victory to those it was borne before, but death to him that carried it. When any warrior who took up the banner was slain, Earl Sigurd's men refused to pick it up, so the Earl himself carried it - and was killed.

Anyway, the Battle of Clontarf was a showdown just outside of Dublin between the High King of Ireland, Brian Boru, and an alliance of Norse and Norse Irish earls and kings. And it was fought on Good Friday, 1014 - just over 1000 years ago to the day. Never one to resist an anniversary, I thought I'd have a go at a refight using HOTT.

I used my 6mm figures, and based the battlefield on a scenario I found on Fanaticus. My choice of armies probably wasn't the best; I used my Viking army straight out of the box on one side - ten Blades, a Warband and a Shooter - whilst I used Norse-Irish on the other, dropping the Lurkers they normally have for another Warband, giving them ten Warband and a couple of Blades, the latter representing Viking allies.

Here are the armies set up. On one side is the sea, and the other a couple of woods. The Norse are in the foreground, whilst the Irish are beyond them. The ship is just garnish. 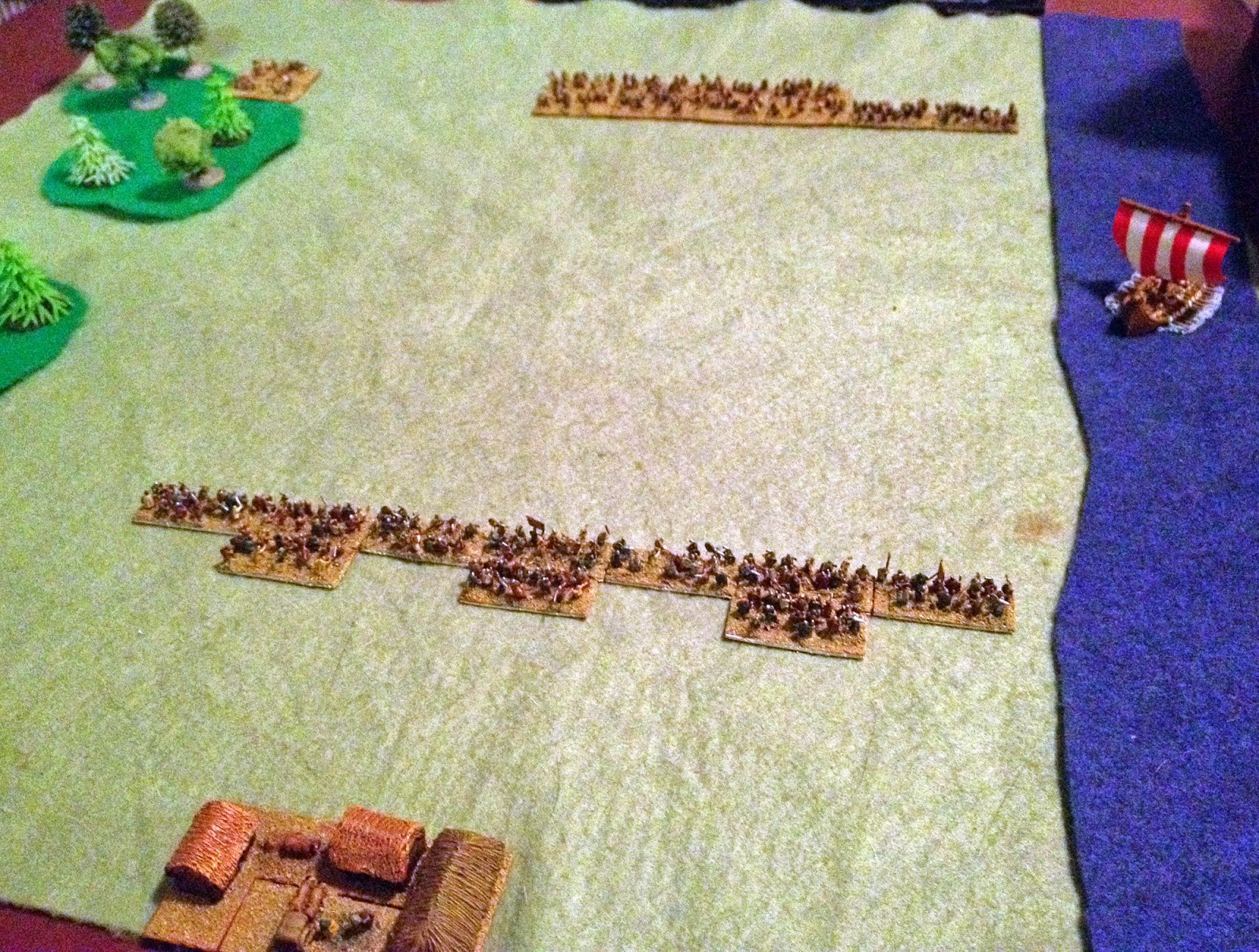 I said the ship is just garnish! It's just for show. Get back to the game ... 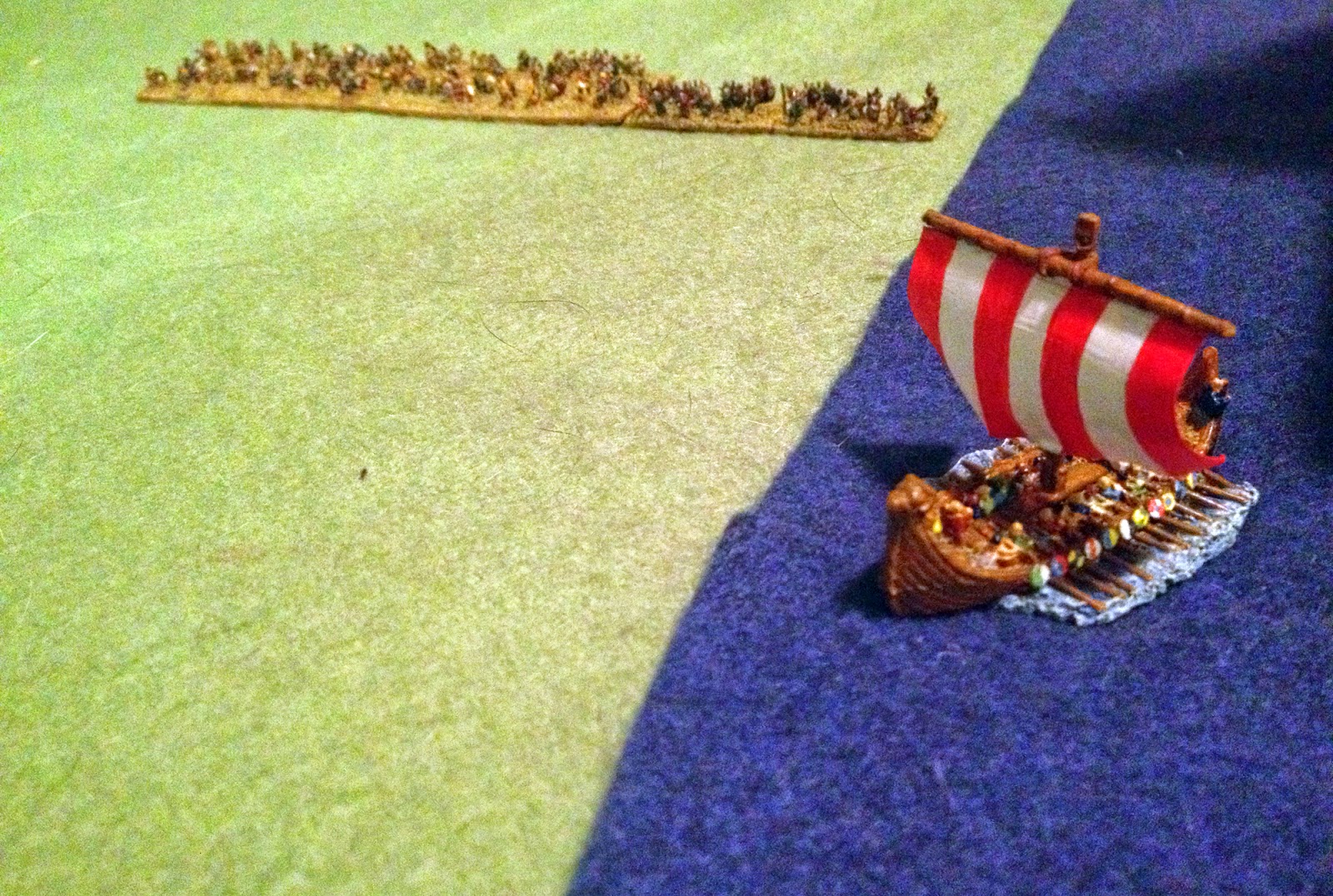 Here's the Norse - a solid line of Blades. 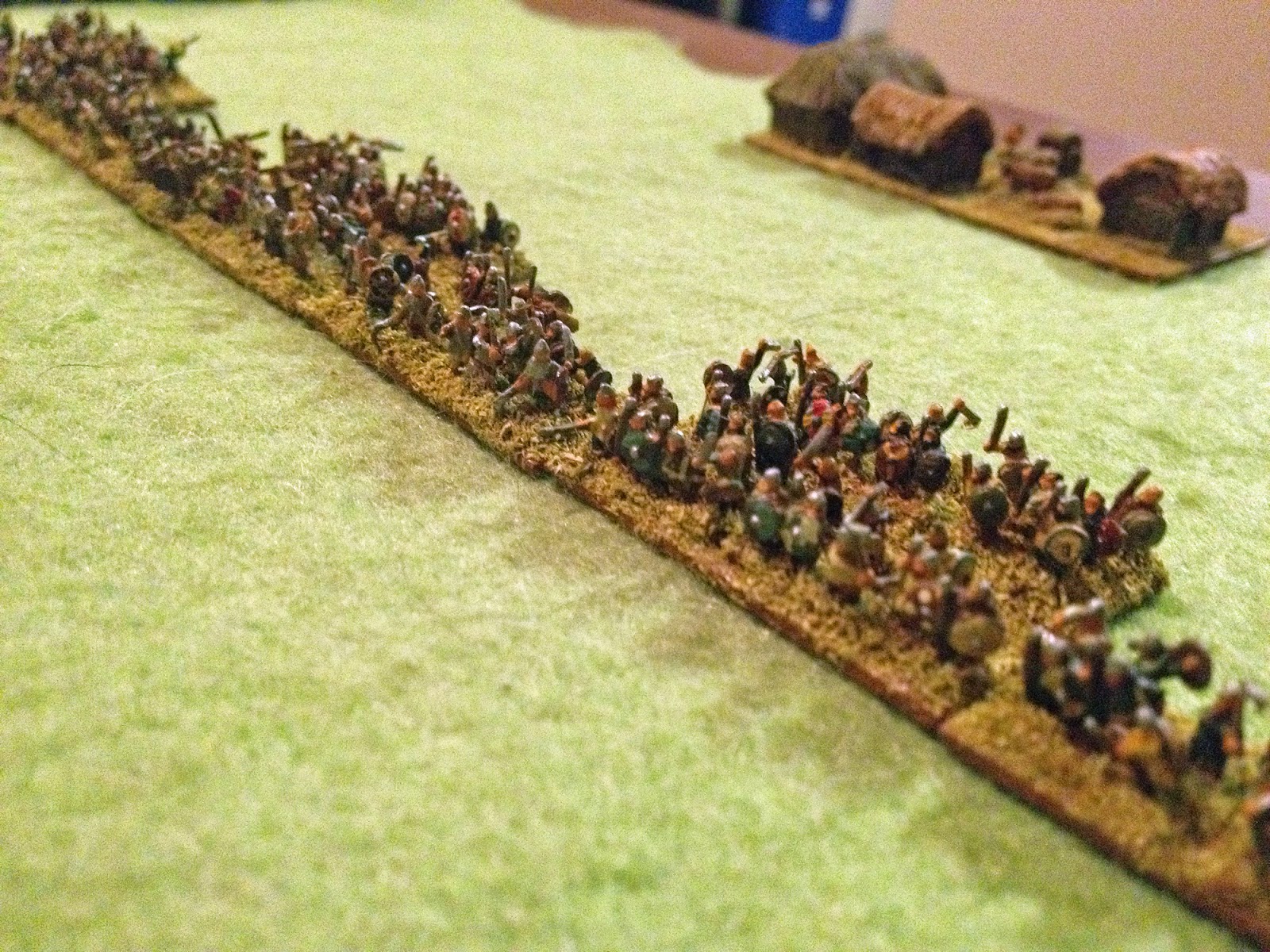 The Irish, ready to charge, 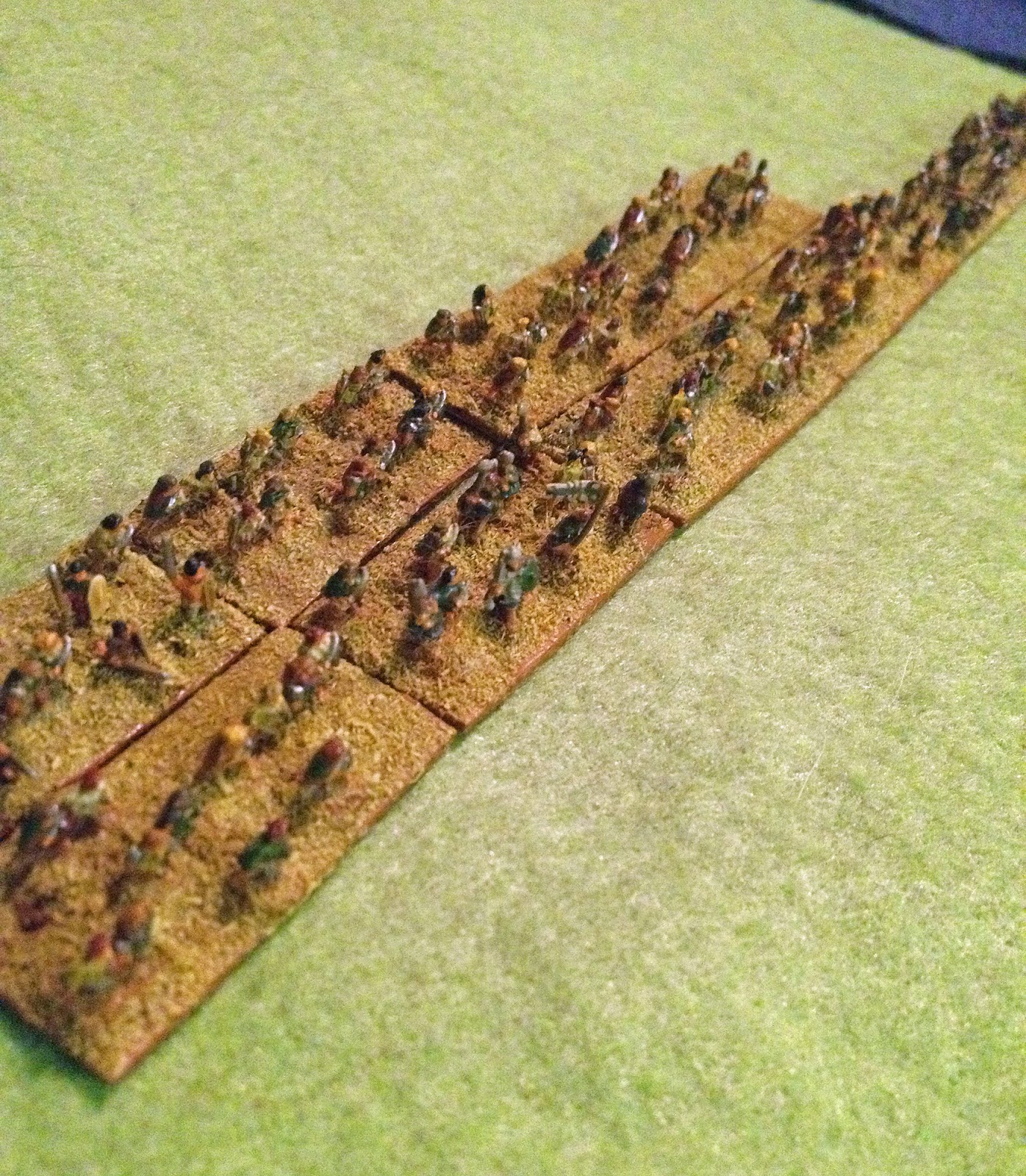 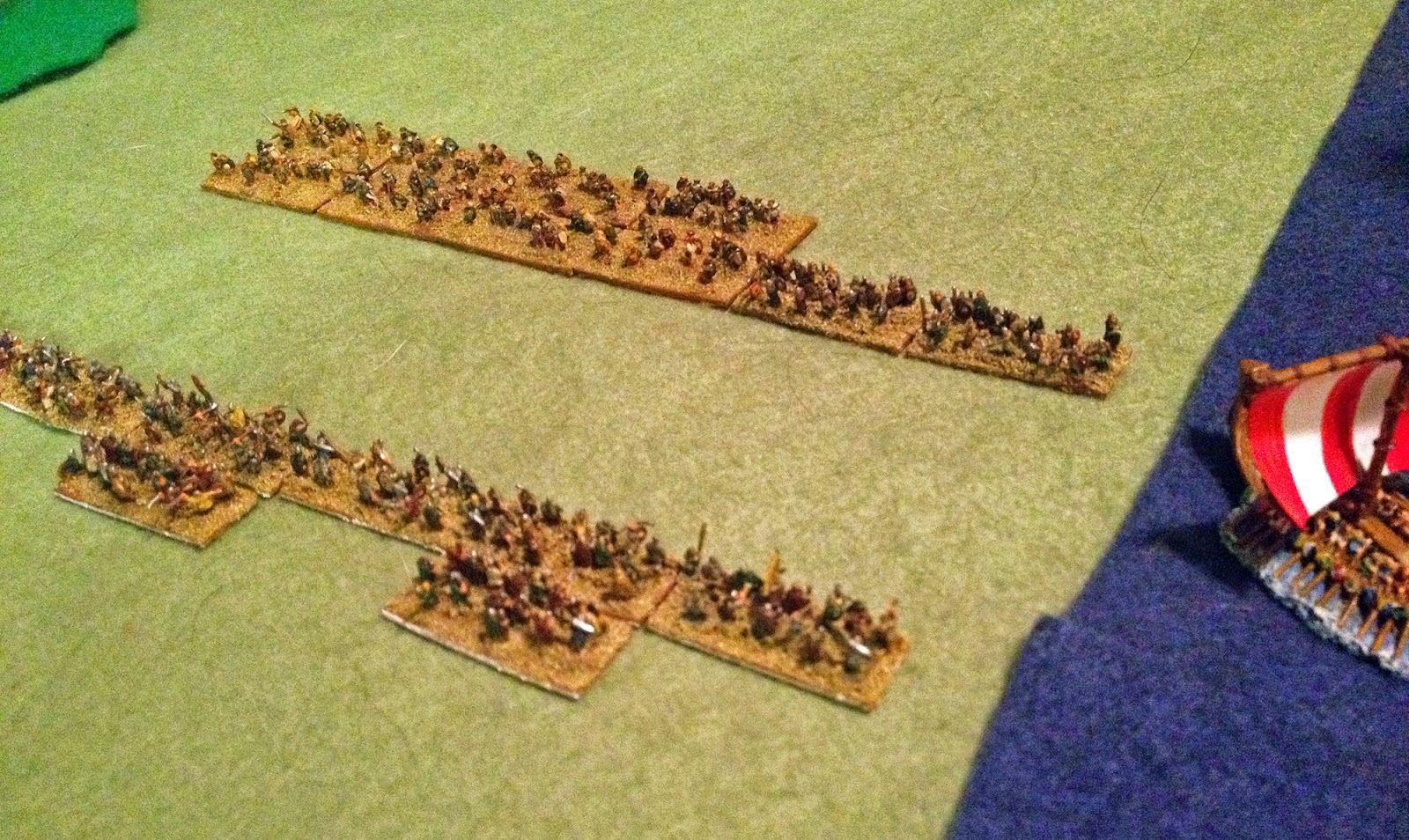 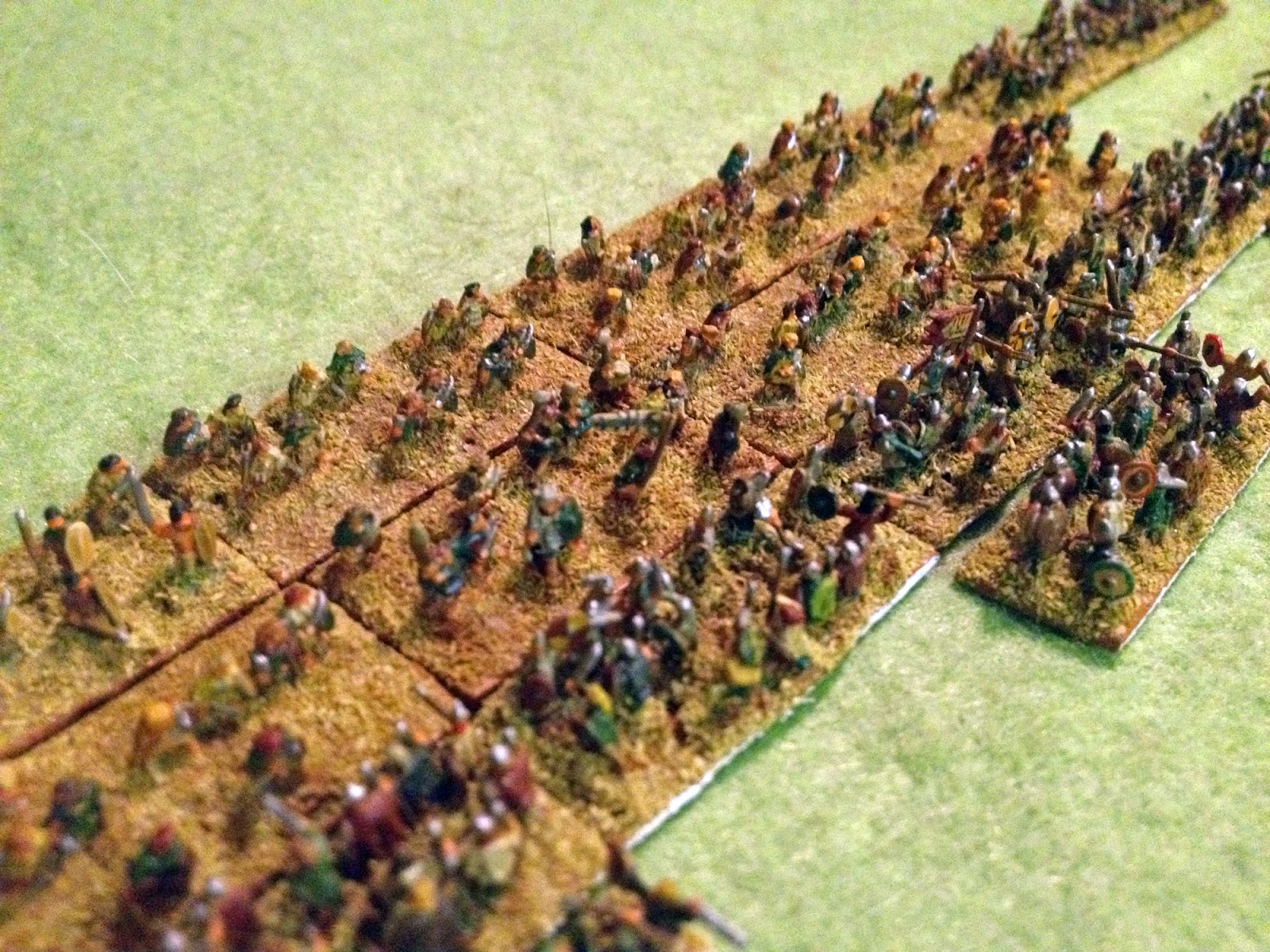 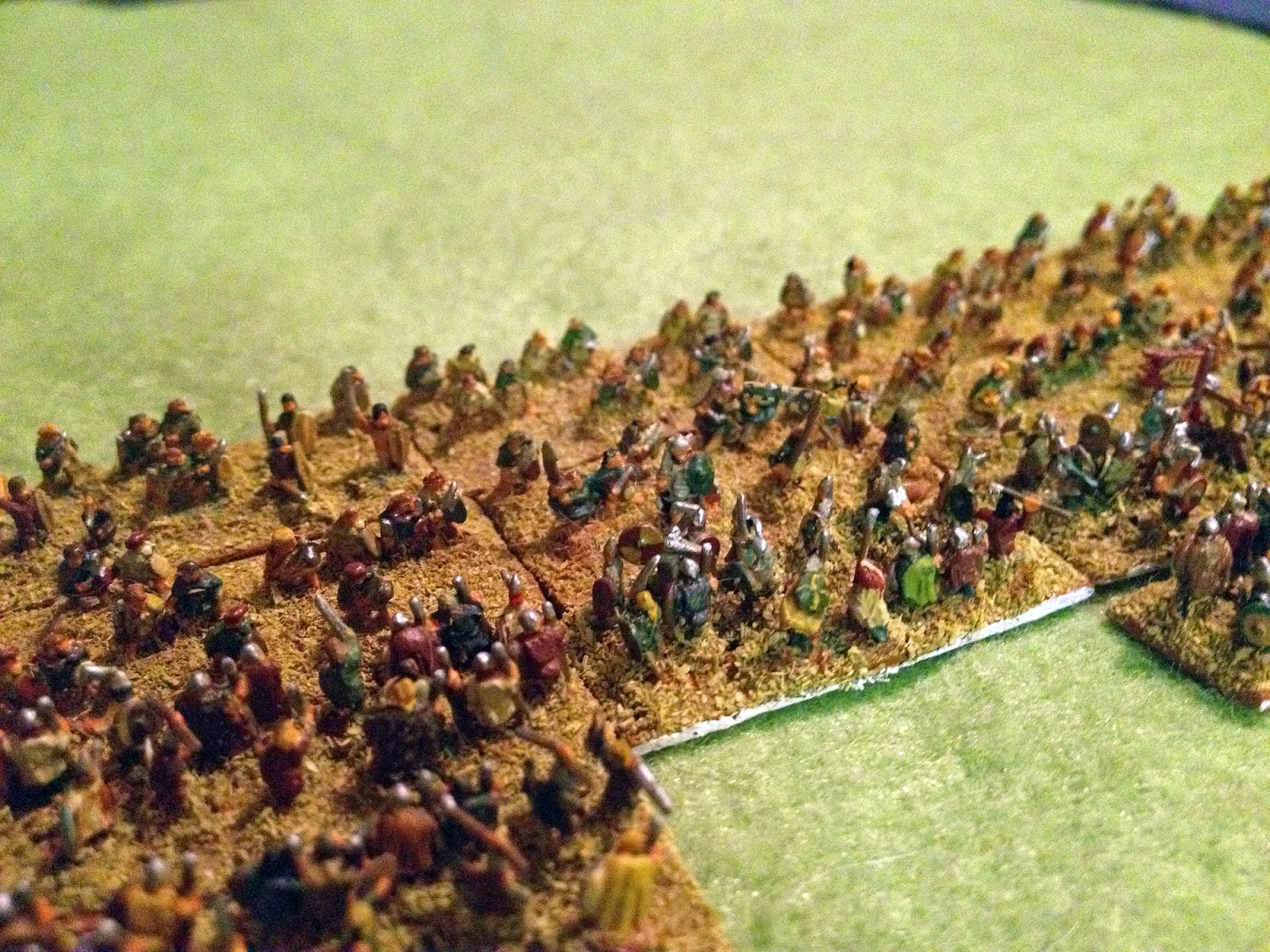 ... and ends rather quickly as the Irish badly lose every combat. 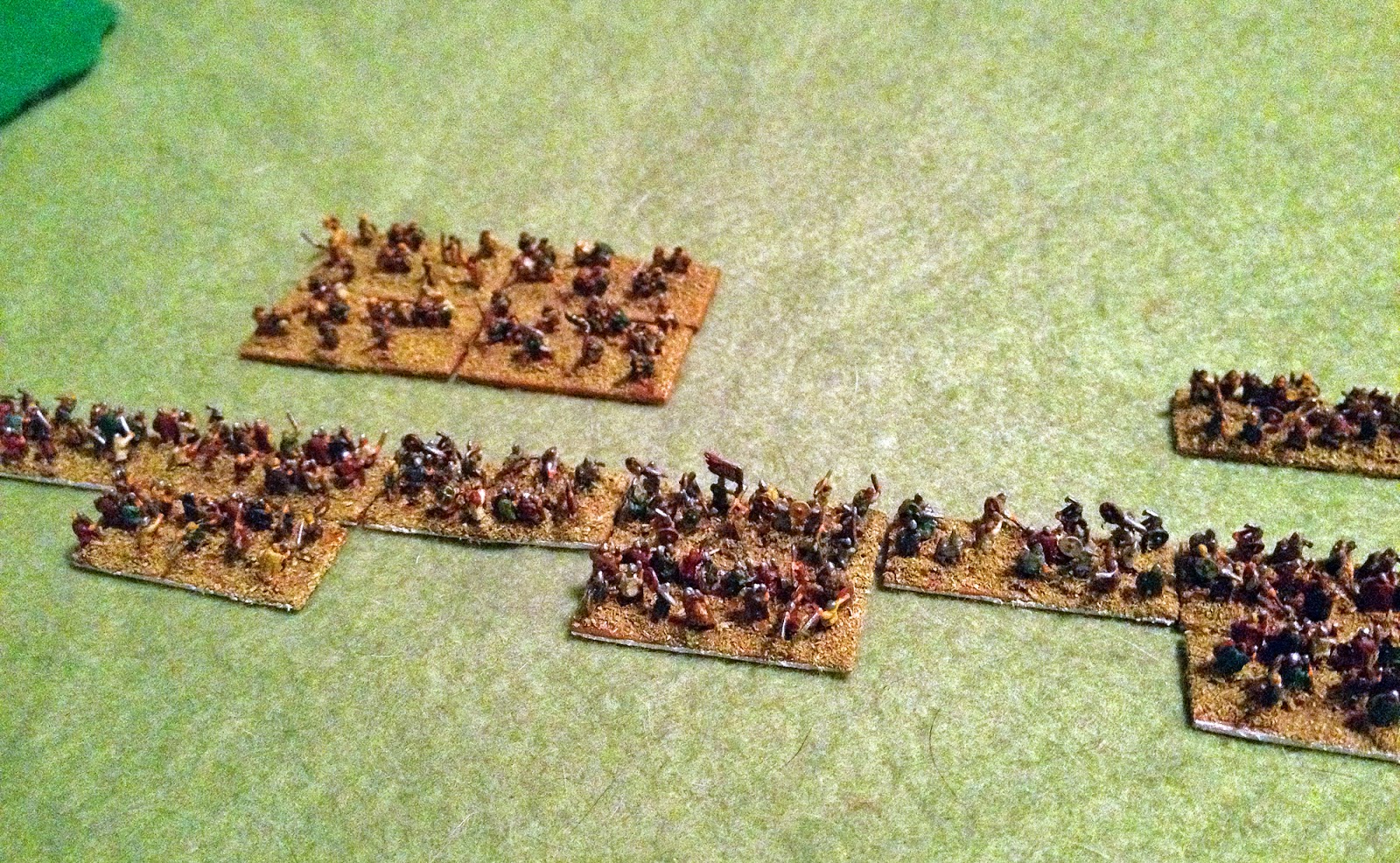 The Norse follow up the recoiling survivors and kill the Irish general. 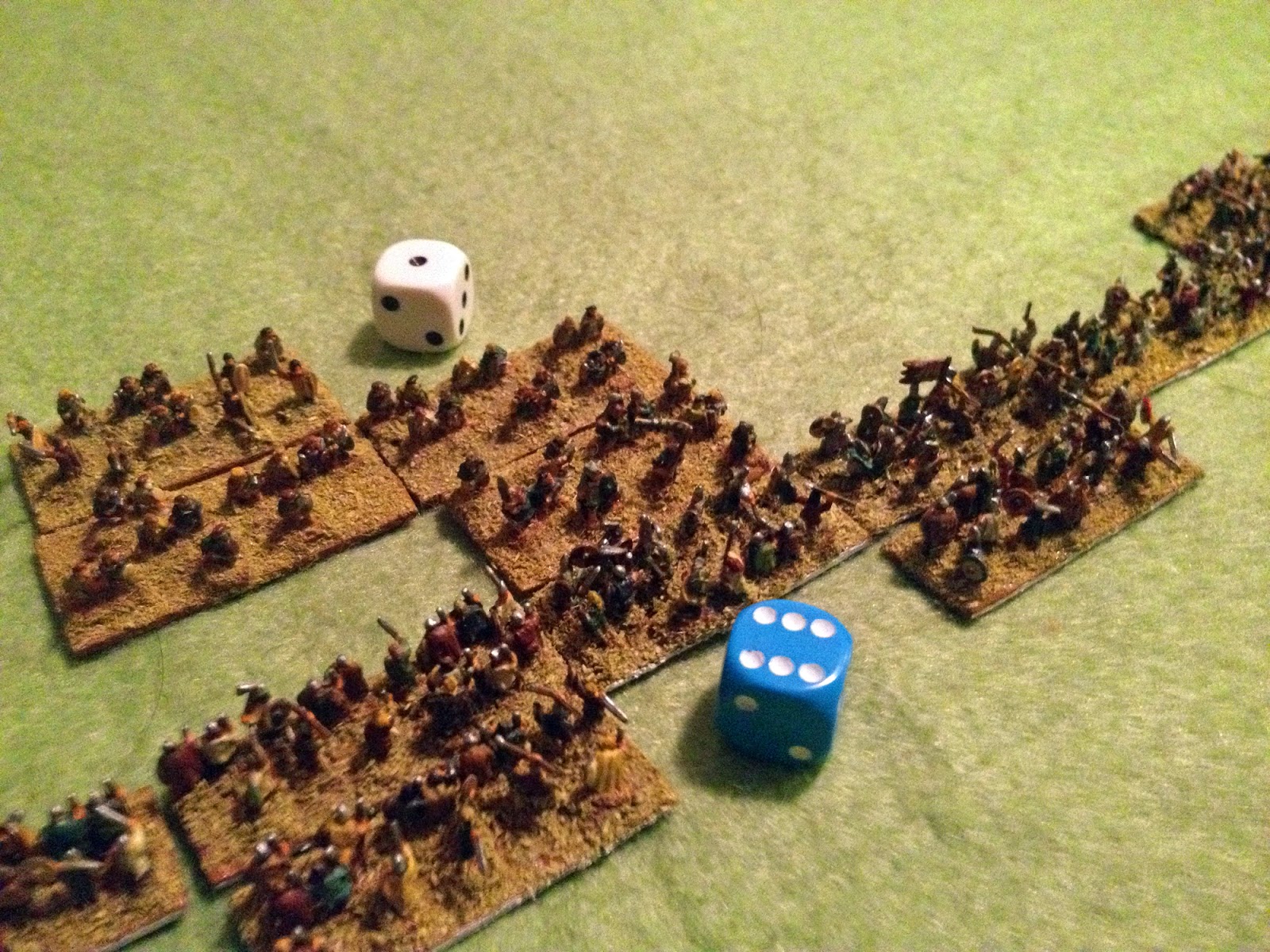 The main fight lasted two bounds - a few elements had fought in the woods on previous bounds; the Irish lost an element there as well.

The Irish lost seven elements of Warband, the Norse one. There's no polite way to put it; the Irish were crushed. Of course with it being a Warband/Blade fight it could have easily gone the other way, with the Norse Blades being swept away.

If I was to do the battle again I wouldn't just use a straight Norse army; accounts show that it was really just an Irish army with a chunk of Norse allies. A propose historical HOTT setup would be:

If I was to incorporate fantasy elements, then Brian's army would have a Hero general - his son Murchad led the army and was claimed to have slain 100 men single-handed - whilst I'd use a Paladin to represent Earl Sigurd with his magical banner. This would give: