It's time for another bicentennial. This time it's the battle of Vilcapugio, fought in what is now Bolivia on 1st October 1813 as part of the South American Wars of Liberation. General Belgrano, commanding a Patriot army of about 3900 men attacked a Royalist army of about 4000 men under General Pezuela.

I had planned to refight this battle on the actual anniversary, but I find myself otherwise engaged on that evening, so I fought it the day before and will content myself with posting it on the actual date (you may read it earlier than that, of course, because in Australia we are very much ahead of most of the rest of the world).

I used my 'Liberated Hordes' HOTT variant, and based the scenario on that provided by John Fletcher in his excellent 'Liberators! Volume 1: The War In The South'. Figures were my 6mm armies from Irregular Miniatures.

Here's the battle set up, with the Patriots in the foreground and the Royalists beyond them. I used a 15" square board. Elements have a 25mm frontage, which gives plenty of flank room, but I used normal 15mm HOTT distances, so things move quickly and ranges get everything into combat pretty quickly. 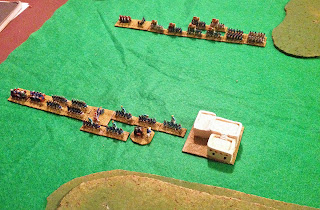 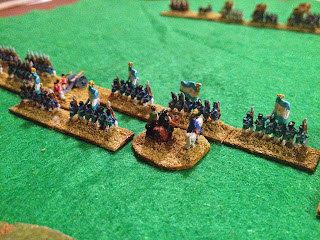 The Royalists: Six infantry, four Militia infantry, one Militia Cavalry and one Artillery. In addition they had one Militia Gaucho unit which started off-table. It would enter on a random flank on a die roll of 5 or 6 on the first turn after the firing started.

The armies advanced towards each other. General Belgrano sent his cavalry against the Royalist right, whilst Pezuela sent infantry against the Patriot right. 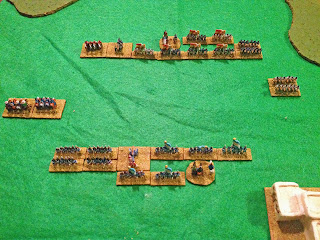 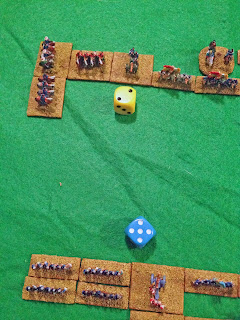 But their cavalry held a charge by Patriot horse superior in both numbers and quality. 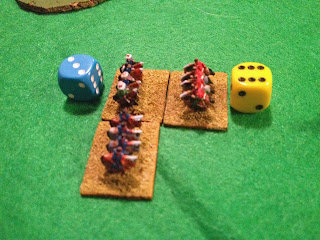 The Royalists started to press the Patriot right, forcing Belgrano to shift his reserve to counter it. 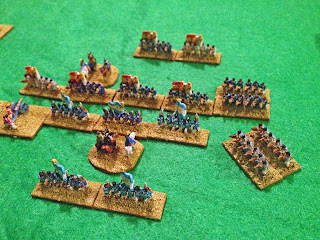 It was at this point that the gaucho cavalry turned up  and charged the Patriot right-wing. 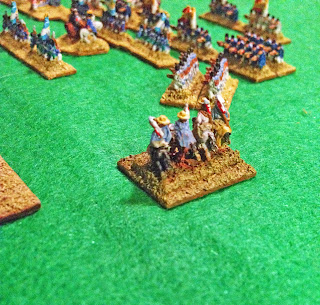 Lots of musketry saw both sides' lines broken up, but no significant casualties. 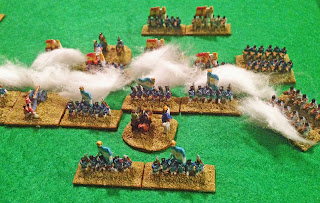 The Royalist cavalry was finally defeated. 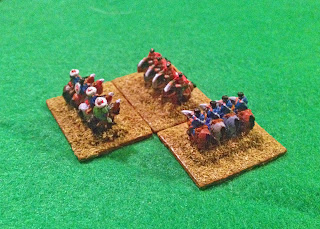 The Royalists charged the Patriot reserve. Victory here would put them firmly into the rear of the Patriot army. Pezuela used this opportunity to apply his bonus for being a good commander - once during the game he could roll two dice for PIPs and take the best score. This allowed him to launch an assault along the Patriot line. 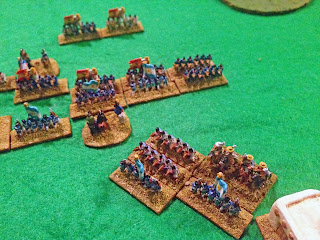 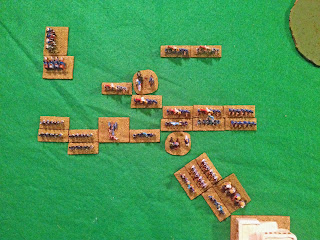 Patriot infantry fell back, but their musketry routed a base of Royalist militia. 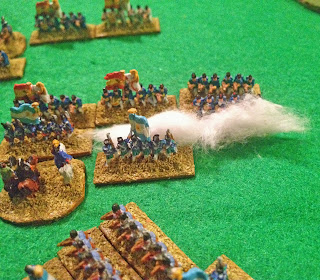 The Patriot cavalry hit the right of the Royalist infantry line. 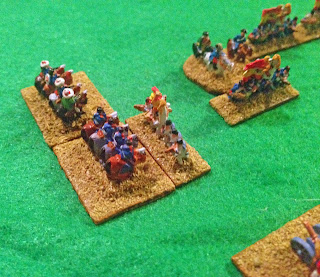 The Patriot reserve outflanked the attacking Royalist militia, saving the army. But what of the gauchos? 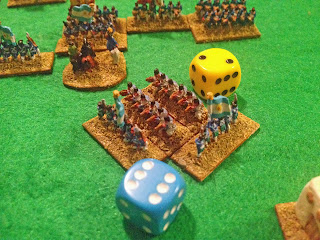 They had fled their first combat, and took no further part in the battle. 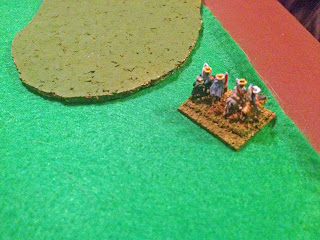 The Royalist infantry was made of sterner stuff, and their musketry cut down an element of Patriot cavalry. 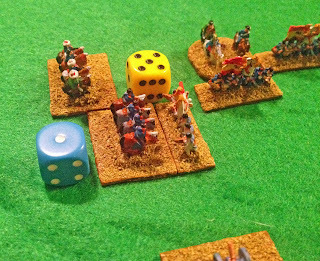 The Royalists pressed their attack - General Begrano was now in danger from a direct flanking attack. 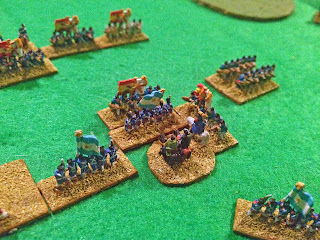 But under his direct leadership the infantry he was with fended it off. Belgrano was rated as a poor commander for this battle which meant that , once per game, his opponent could force him to roll two dice for PIPs and take the worse score. When he did so he still got 3 PIPs and was barely inconvenienced. Indeed at this stage both commanders were mostly rolling one and twos for PIPs, and the battle had degenerated into a series of local attacks and counter-attacks. 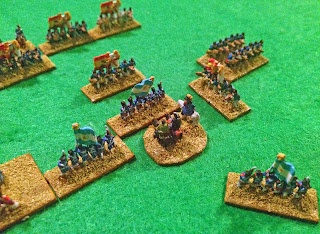 Musketry from the Patriot reserve accounted for another Royalist unit. 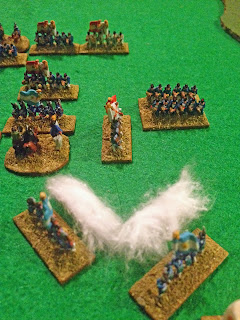 The Royalists fell back, trying to consolidate their position. 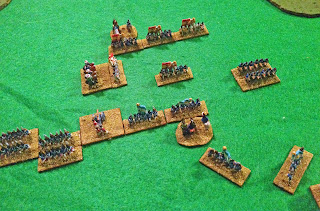 But the Patriots pressed them hard - the reserve cut down some more militia ... 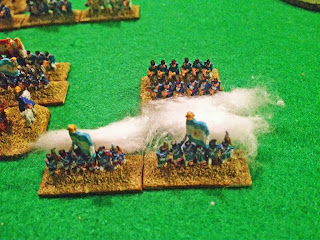 ... and a charge led by Belgrano himself routed another Royalist unit, breaking the army. 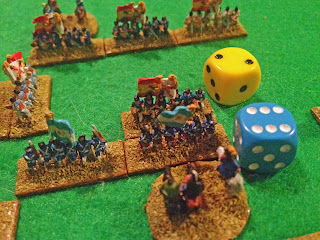 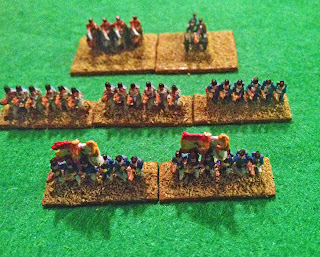 Patriot losses were light - one Cavalry and one Infantry. 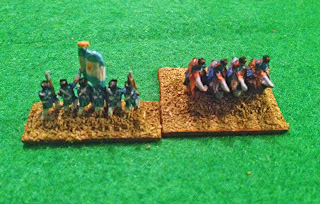 The final position. To the right can be seen the gauchos. At the top of the picture is the surviving Royalist infantry line, still in relatively good order. But the Patriots have cleared their own right flank, and are pressing the Royalist right. Pezuela surrenders and seeks terms. 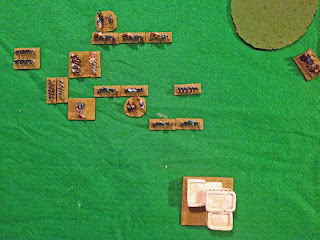 This was a quick game, played in just over thirty minutes. Both sides managed effective flanking moves, and that of the Patriots stalled badly as their cavalry failed to sweep all before them. The Royalists seemed to have it all going for them, but the Patriot reserve saved the day, routing four elements of Royalist infantry and driving off the gauchos.

I realised that the version of 'Liberated Hordes' on the Free Stuff page is very much out-dated, and the version I am playing now has a number of differences. I will have to update it at some stage, as most of the changes make for a far better game.