I took Palaeo Diet to the Gong Garage Gamers last night, and Caesar an I played a couple of games.

We started off with a basic cooperative hunt to get get Caesar used to the rules. I'd painted a few more mammoths during the week, so I now have a decent herd - four adults and two juveniles. 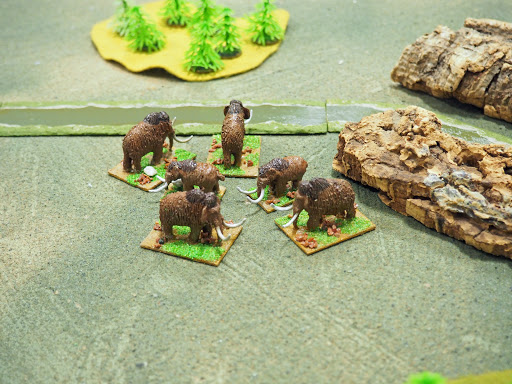 Caesar and I took three hunters each. Our target was six bulk - each adult is worth four and the juveniles three. We were allowed to lose one hunter achieving this. If we lost two then we had to produce eight bulk to show for it. Losing more than two hunters would be considered a failure regardless of what bulk we gained. 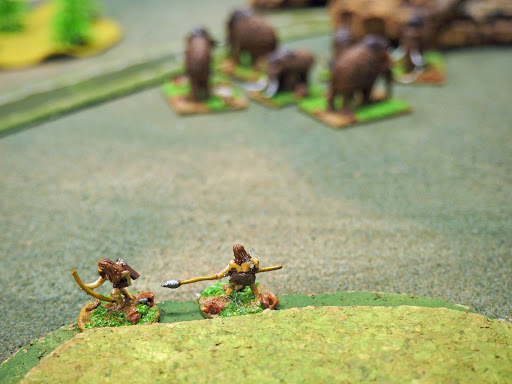 We surrounded the herd. Our plan was to isolate one of the parent mammoths, since the reaction table will tend to have the juvenile follow them. This would give us all we needed in terms of our goal. The isolated pair would be drive along the river-bed between the outcrops where it could be trapped between two teams of hunters. 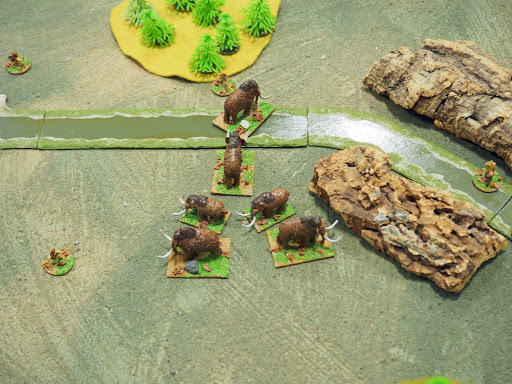 It all went according to plan until Caesar brought one of his hunters in too close to the mother mammoth, and she attacked him. This made it harder for the other hunters to coax it along, since any reactions would tend to translate into attacks on the hapless hunter. 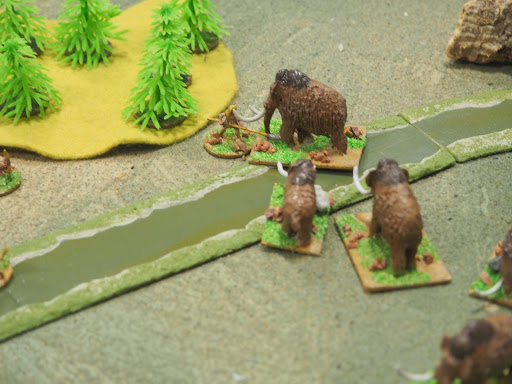 In fact the hunter did an amazing job on his own, inflicting almost enough wounds to kill the mammoth single-handed, before taking a hit in reply (the mammoth rolled really badly for her counter-attacks).

Meanwhile the other hunters tried to break up the herd and at least isolate their targets. 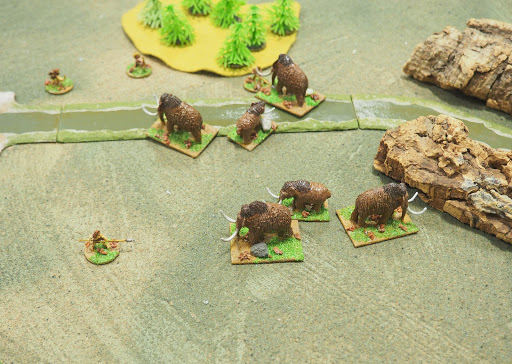 In one case this involved the unintentional provoking of an attack, which cost us another wounded hunter. I brought in one of my hunters on the juvenile mammoth. He injured it but, embarrassingly, was wounded in return (a one in six chance). 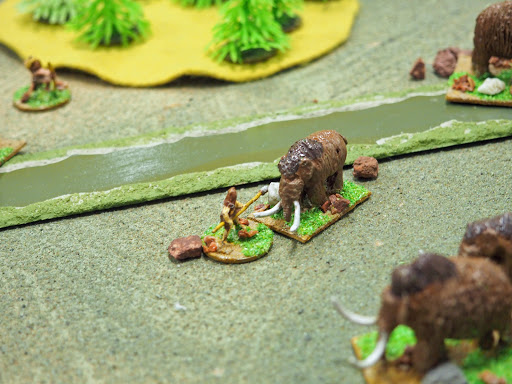 we now hd three wounded hunters - each hunter can only take two hits, so we had to be cautious now in order to avoid losing any of them. 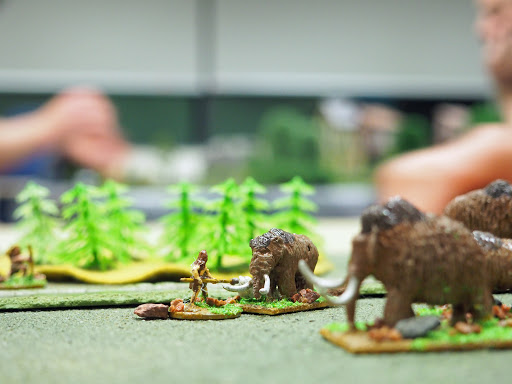 We pulled back the injured hunters, and brought up our clubmet from the canyon, where the'd been our ambush force. With two targets now wounded it was quicker to finish them off in the field. Caesar's clubman did the job on the adult mammoth. 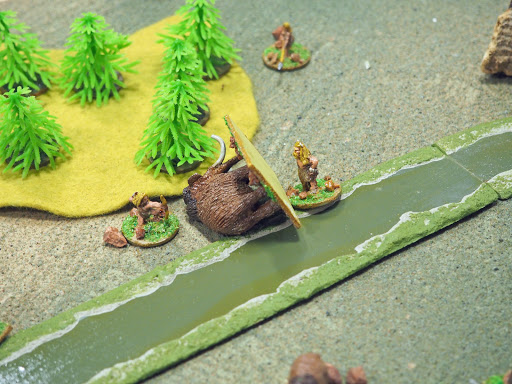 And my spear-wielder killed the juvenile.

So despite not going entirely to plan, our hunt was successful, with seven bulk gained and no hunters lost. Three were injured though. 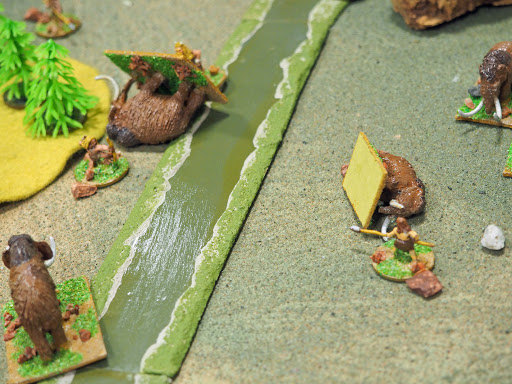 We had time for a second game, so I set up a scenario I'd not played before, Follow That Bird. In this one two groups of hunters compete to capture an ornately feathered bird in the centre of the table and return it to their chief. Obviously the bird will resist being captured. There are also a couple of predators on the prowl. We had three hunters each. The bird in the counter in the centre of the table (I haven't any suitable models yet). And there's two terror-birds on the prowl, which we classed as Pack Predators. 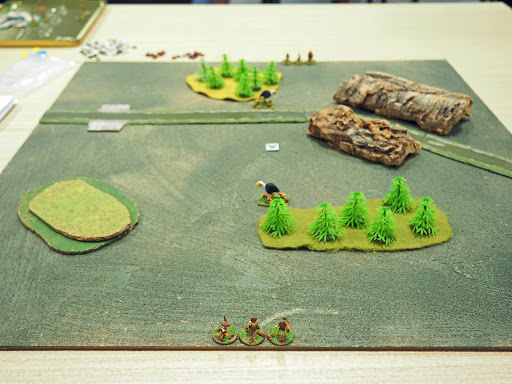 Caesar's initial activations immediately attracted the attention of a terror-bird. 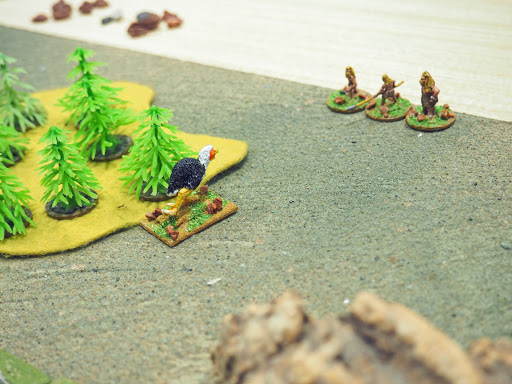 His lead hunter decided to take on the predator, and despite being wounded he killed it. 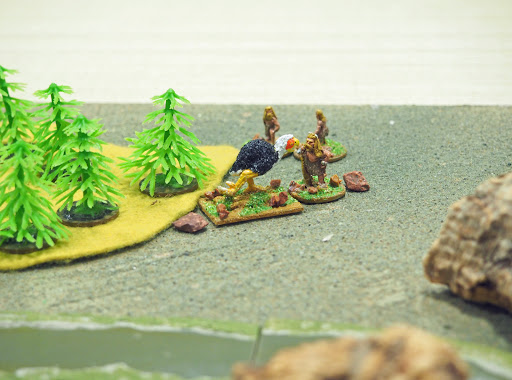 This attracted the other terror-bird, leaving my route to the target bird free. Except in their enthusiasm to reach it the hunters disturbed it and it ran off. 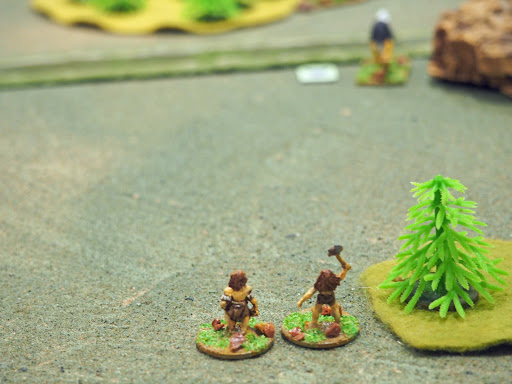 Everything converged on Caesar's hunters. 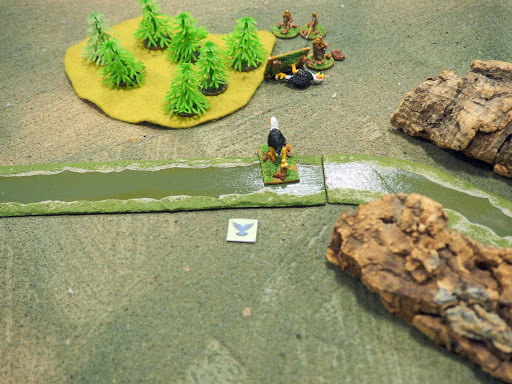 Mine crept up on the target whilst the second terror-bird entered the fight. 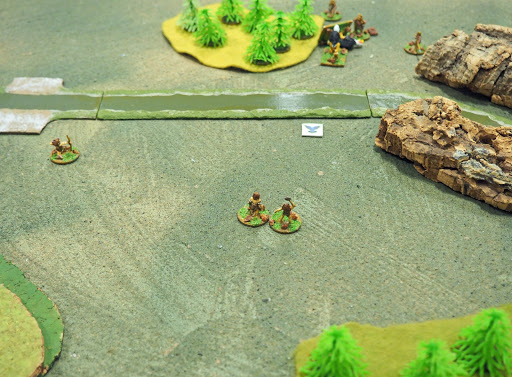 Caesar's lead hunter fell, and the predator began to feast on his corpse. Caesar took the opportunity of it being distracted to nip past and head for the target bird. 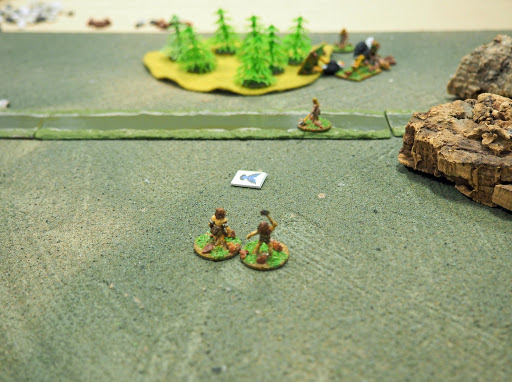 There was a brief skirmish. One of Caesar's hunters was wounded by an arrow, whilst one of mine was killed by a spear. 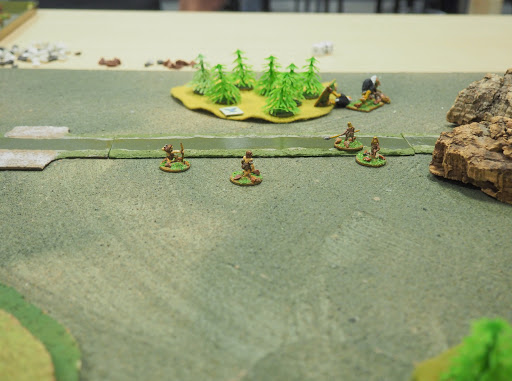 The bird we were chasing fled into a thicket. 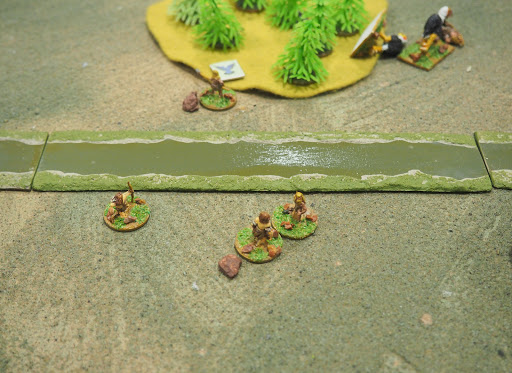 But the surviving terror-bird wandered over attracted by the scent of blood and fresh meat. 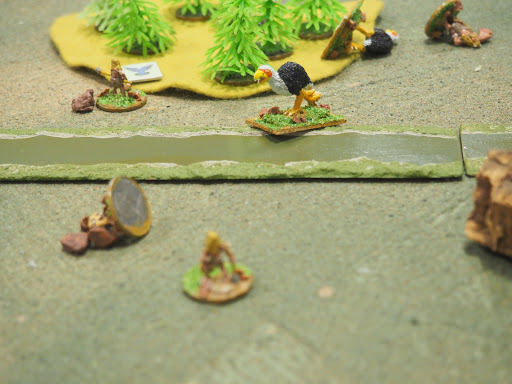 Despite being wounded, it was one of Caesar's hunters that caught the prize. All he then had to do was make a single move off the board edge in order to claim it. All I had to do was inflict one hit on him with two hunters making the attacks.

I missed, and Caesar's hunter escaped to claim the win. 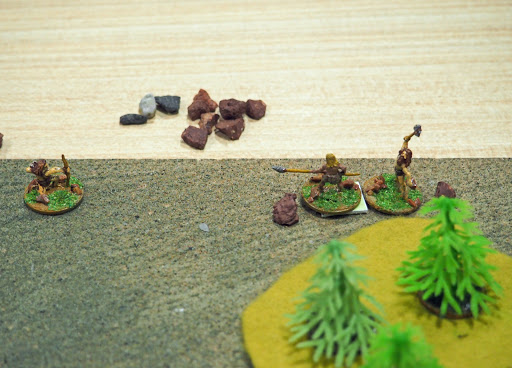 I really enjoyed both games. Wrangling a herd of mammoths was quite a challenge, but made for some interesting decisions - the cooperative game is an interesting puzzle to be solved each time, with enough unpredictability to keep it interesting. Follow The Bird was a lot of fun and has some great replay value with different terrain set-up as well as the fact that the predator positioning is randomised as well (in our game they ended up between us and the target, for example).

We ended up in yet another room, which seemed to be the storage for  tremendous number of chairs, somewhat limiting our actual gaming space. As well as one of my stylish masks, I wore some wargames appropriate earrings as well. 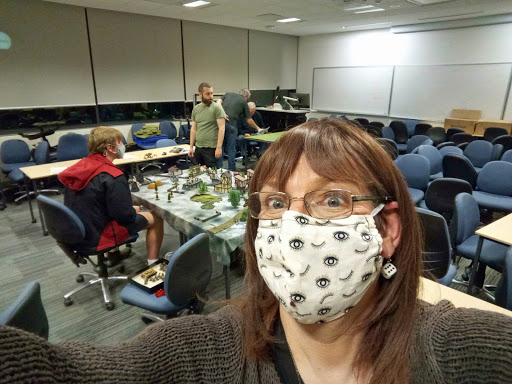 Here's a better view from earlier in the day. 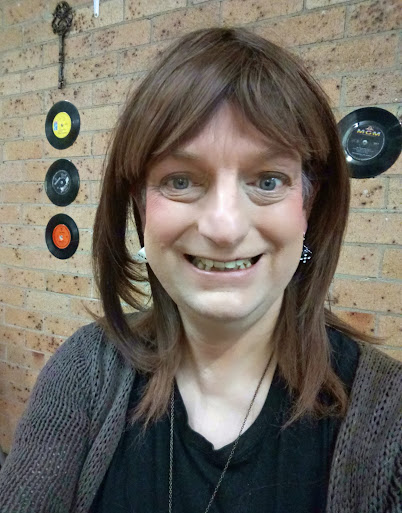