For this week's HOTT 52 game I thought I'd play a game between two of my more whimsical HOTT armies - the delightfully silly Garden Gnomes from Peter Pig , and my Alice in Wonderland army. Both armies feature spears and behemoths. The Gnomes support them with a magician and some shooters, whilst Wonderland uses beasts and lurkers.

The Gnomes defended and drew up with the spears in the centre, their shooters defending a hill on their right and their snail behemoths on the left. 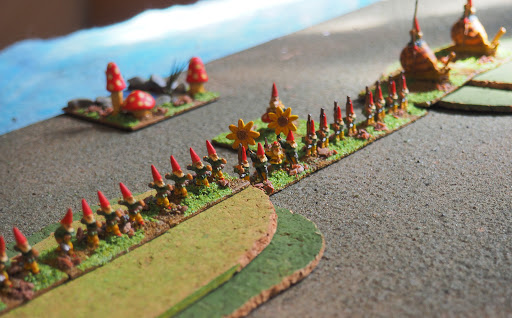 Wonderland had a mushroom forest down the centre of their deployment area, so formed up on one side of it, their spear phalanx facing the shooters on the hill. Alice covered one flank, whilst in the wood were the Griffon, Mock Turtle and flamingo beast elements 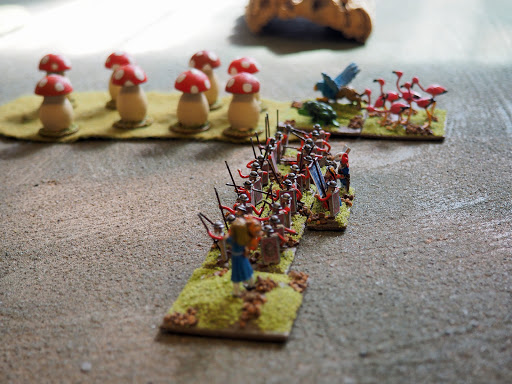 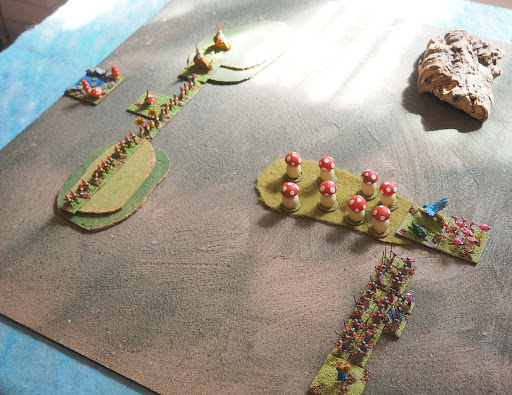 As Wonderland advanced the Gnomes swung their left flank around. Thr snail behemoths moved in on the mushroom forest. 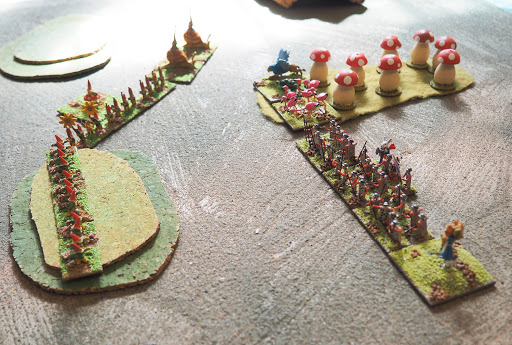 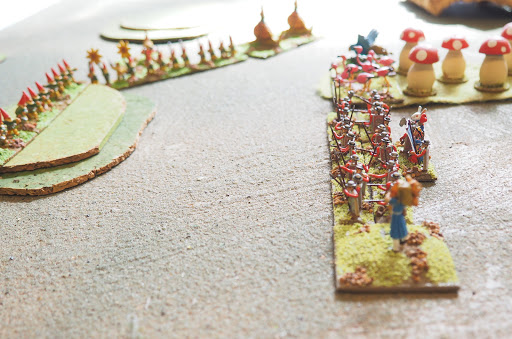 Wonderland's beasts swung around to meet them. 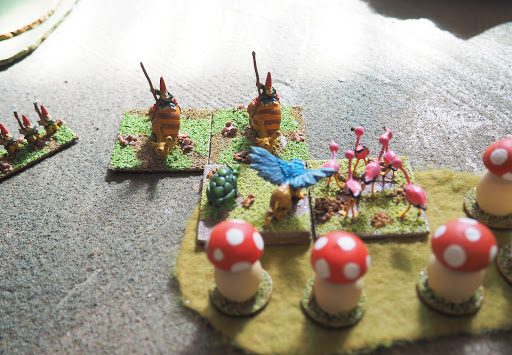 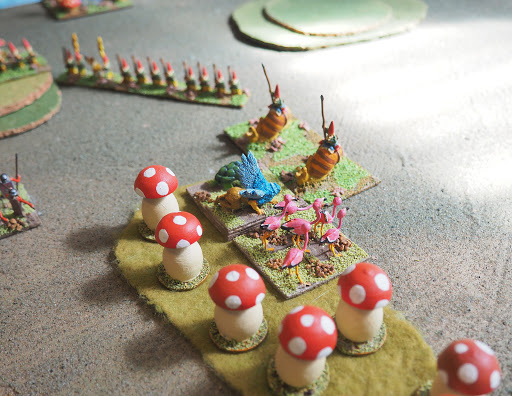 The Griffon and Mock-Turtle were quickly overrun. The advancing snail found its was blocked by an insane tea-party ... 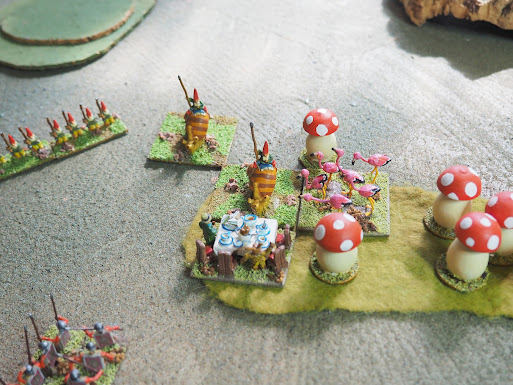 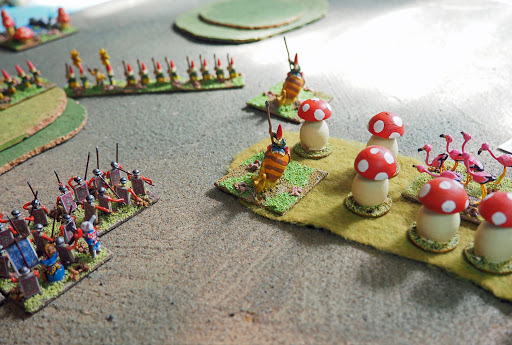 It crashed into the flank of the spear phalanx. 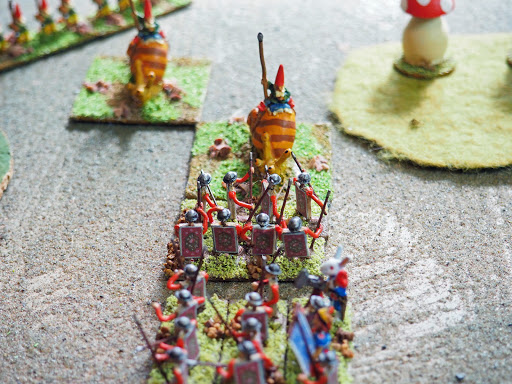 Meanwhile the phalanx had come in range of the Gnomes on the hill, who rained down missiles on it, destroying part of the first rank. 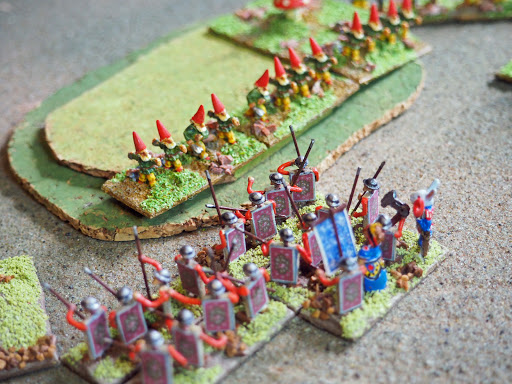 The snail was driven back, and destroyed by a flamingo flank-attack from the mushroom forest. 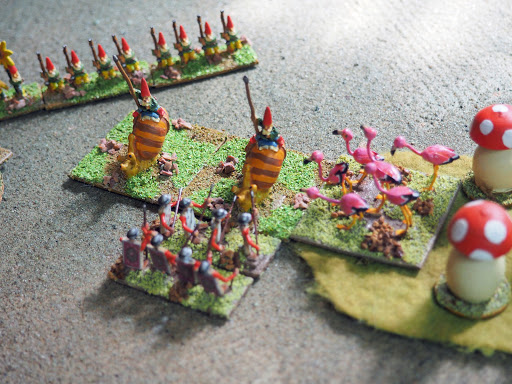 This left the Gnomes with a behemoth stuck in front of their army and unable to safely recoil without destroying friendly troops. The Gnomes withdrew and reorganised. 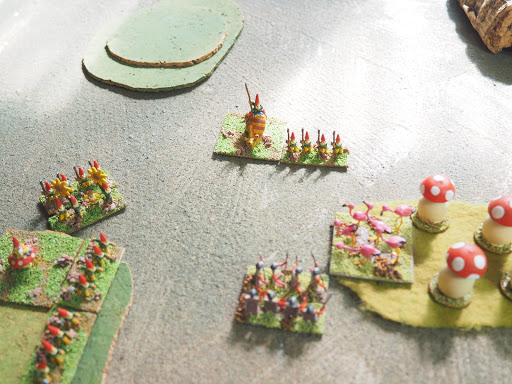 On their right, their illusionist enticed Alice with images of home, and she fled. Angled to turn on the Gnome's flank, her flight took her off the board. 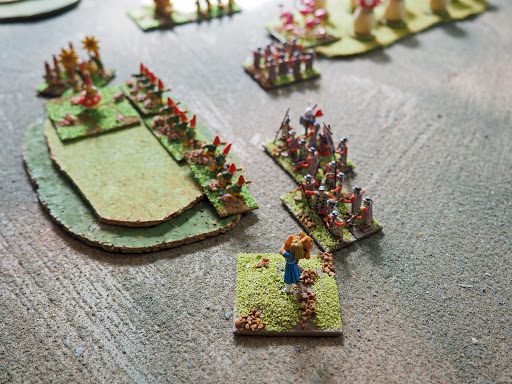 The phalanx pushed up the hill, and slowly drove the Gnomes back. 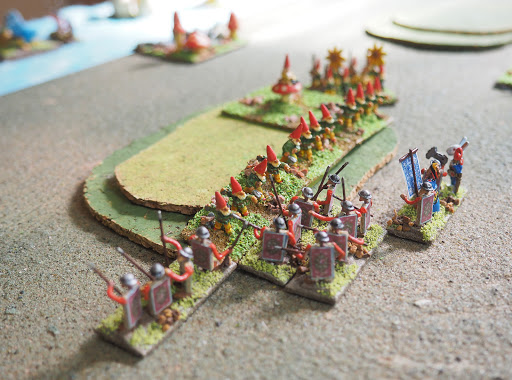 The height of the battle. 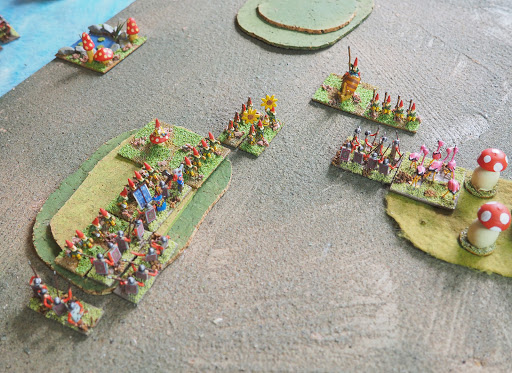 The Queen of Hearts led her bodyguard into the attack, pushing back some of the Gnome shooters. 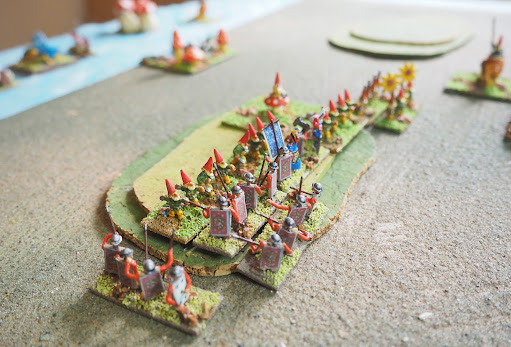 The Queen was outflanked. However her troops fought their way ut, destroying the Gnomes facing them. But it was too little, too late ... 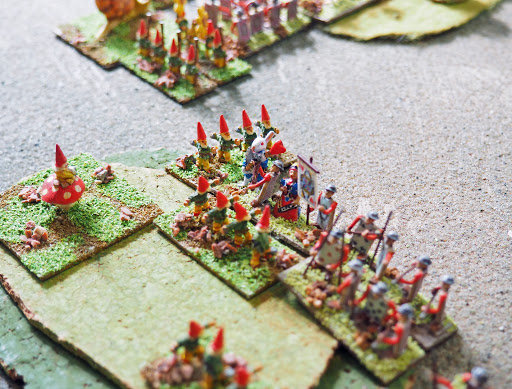 On Wonderland's right their spears were forced back into the mushroom forest and routed as the Gnome King personally led the attack. 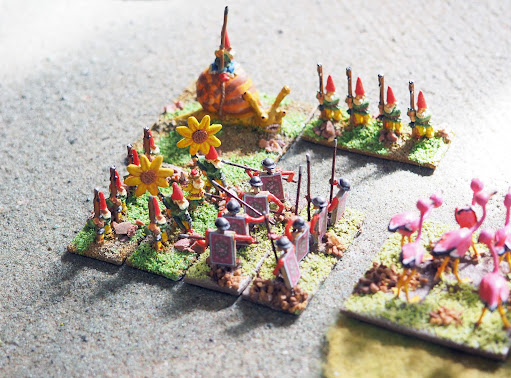 Their loss was enough to break Wonderland's army. 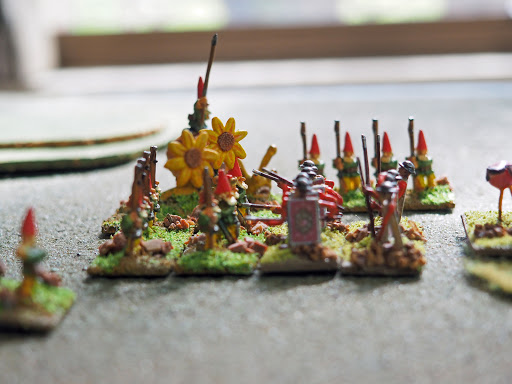 Wonderland were outflanked, which is never good, but could have held on and won a victory had some of the earlier combat scores been better. In fact the early combats were relatively even and could have gone either way, costing the Gnomes their expensive behemoths.

Whatever the result this was a colourful, fun and exciting game!