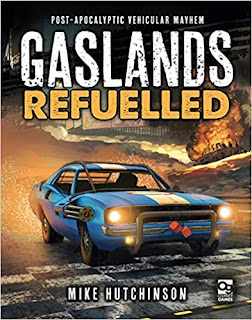 I finally have my copy of 'Gasland Refueled'!

What's that? well, it's the vastly expanded and revised version of Gaslands. It covers everything the original game had, plus all of the material from the for Time Extended supplements, plus some entirely new stuff. And it's been revised to deal with issues of balance as well as to clarify some of the murkier bits.

What's in it? Well, the basic game is unchanged. The rules are better explained though - it takes you through the absolute basics of mvement first, then shooting, and only then introduces collisions and the other tricker stuff. Finally it finished up with the different vehicles and weapons types, plus old and new sponsors and perks. There are several well -diagrammed and well-explained examples of play covering some of the areas of the game that weren't entirely clear in the original.

A lot of the weapons have been tidied up; for example, rockets are no longer as deadly as they were, there's a point to buying mines in stead of caltrops. A few new ones have been added. All of the old sponsores are there, plus the two from TX and five ones new to this volume. In addioton a few perk classes have been revised and some new ones added. There's plenty of scope for interesting teams, including one made up of haunted vehicles.

The six original scenarios are in the game, plus a few wasteland skirmish scenarios and some new special ones (hunting giant radioactive monsters for example). There's also the campaign system from one of the supplements.

The whole thing is packed in a sturdy hardback book.

If you like Gaslands then this is the game you remember, improved and expanded. The new stuff almost entirely adds to what was there before, rather than radically changing it. I'm looking forward to giving it a spin.