Caesar and I played HOTT last night. Unfortunately I left my phone at home, so there are no pictures.

Caesar used my Spawn of Tiamat army. Here's Tiamat, and some of her spawn. It's basically a Sumerian mythological extravaganza, with loads of weird and wonderful monsters. 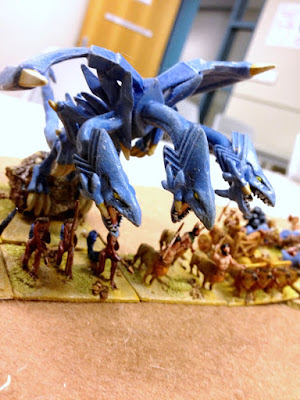 I used my Fishmen. Here they are. 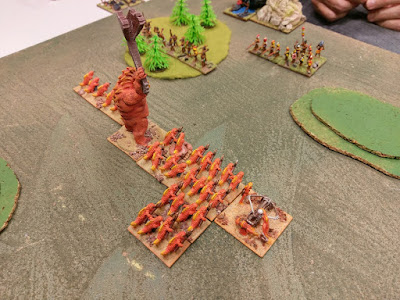 The Spawn of Tiamat has 34AP worth of troops in the box. Caesar couldn't decide what to drop for a 24AP game, so we played at 34AP. The Fishmen have enough troops to cover this.

I lost both games. The Fishmen always had a solid centre, being based around spears, but Caesar used beasts and a hero to turn one of my flanks in both games. In the second game I actually managed to rotate my spear-line in response to this, and held off the attack for a while, until Tiamat's army was close to breaking. But a lucky kill on one of my elements broke the line, and in a single turn it collapsed entirely, costing me the game.

Top element in my army was the single element of artillery. In the first game it ended up isolated on a flank, and was attacked by a beast, supported by a hero. They held off the attack, killing the beast, then shot the hero in the next bound, killing him. In the second game they were attacked by Tiamat's dragon, and drove it off.

Anyway, both games were great fun, with plenty of colourful troop-types on the table, and plenty of drama. But you'll just have to take my word for it.