Fraustadt with Twilight of the Sun-King

My copy of the newest edition of the Twilight of the Sun-King rules came a few weeks ago, but it too us until yesterday evening to get ourselves organised for a game. The rules cover the period from roughly 1680 to 1720, with two game scales  of either 1000/500 or 2000/1000 infantry and cavalry respectively per unit. They allow big battle to be fought fairly quickly with a simple mechanism in which all firing and close combat are absorbed into a single morale test per unit per turn.

Caesar and I had played one game of an earlier edition a couple of years ago, and I had played some other games at home, so we weren't totally unfamiliar with the system. Gary joined us, but hadn't played before at all. The new edition expands on the previous version in part by including various special traits which can be added to units, including variations in size, unit quality and enthusiasm, and adding differences in weaponry such as matchlocks and pikes.

There is a scenario booklet available, covering some of the campaigns of Louis XIV, but the introductory scenario in the book could have been written for me - the 1706 battle of Fraustadt, from the Great Northern War. This features a Swedish army outnumbered two-to-one attacking an entrenched Saxon army with Russian allies. This rash action was prompted by the presence of a Polish force in the area, forcing the Swedes to deal with one army before the two joined up and outnumbered it any further. On the day the Swedes swept to victory. How would it play out on the table?

This is the setup, with the Swedes on the left and the Saxons on the right. We played at the brigade scale, so units represent 1000 cavalry or 2000 infantry if normal-sized. Support, especially rear-support is essential in the game, so even with the small number of units, both armies were deployed in double lines where possible. The Saxon/Russian line was anchored on two villages, and their right flank was covered, in part, by a frozen marsh.

Since Caesar and Gary were less experiences they split the Swedes between them, whilst I played the more static Saxons, which allowed me to look up rules and explain the game as we played. 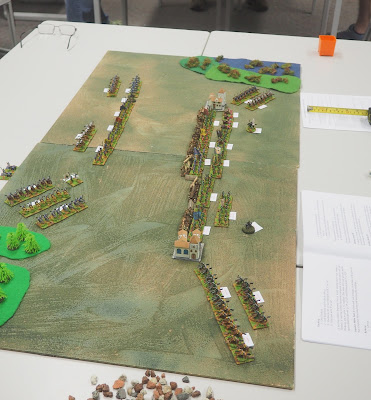 The Saxon/Russian line. In fact the figures were all Russians from my Risk-figure GNW collection. In fact one of the cavalry units was Swedish as well. 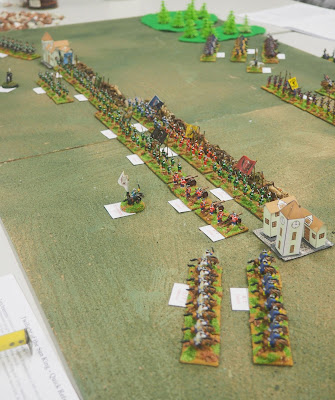 The Swedes. They are heavily outnumbered in this battle, but the enthusiasm of their troops is outstanding, giving them quite an edge in the meat-grinder morale test combat that is a feature of the game. 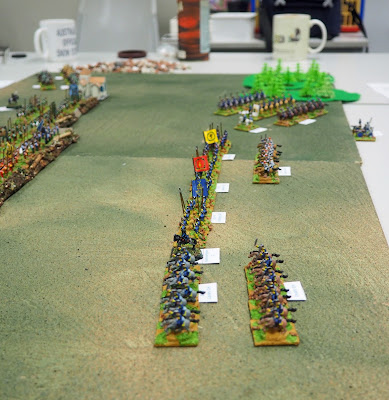 The Swedes had a small amount of artillery which could arrive as reinforcements, but the Saxons had a couple of units deployed as part of their line. In Twilight, artillery can fire through friendly units; an abstraction which assumes that the units are, in fact, numerous regiments with gaps and firing lanes between them, and that the artillery could be sited on low rises not shown on the table. 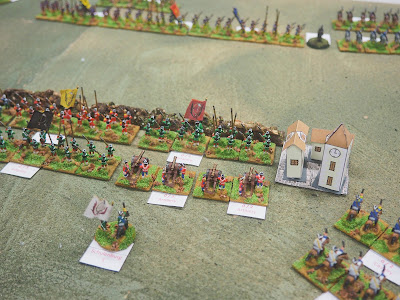 The artillery started to bombard the Swedish infantry. This puts the pressure on the Swedes to attack. Their infantry, whilst good, cannot easily take the Saxon position, but neither can they afford to stand and take fire. In order to turn the battle in their favour they need to deploy their other arm ... 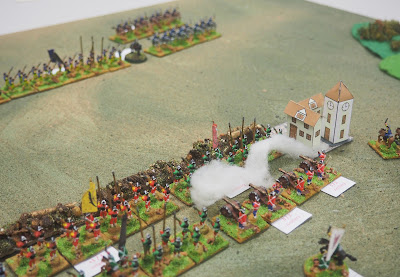 In this battle the Swedish cavalry have the edge in both numbers and quality. They attacked on both flanks, looking to cutting in on the Saxon flank and rear as quickly as possible, either breaking their army from that, or allowing the infantry to make a final, battle--winning, push.

This is Gary's force, attacking the Saxon right. 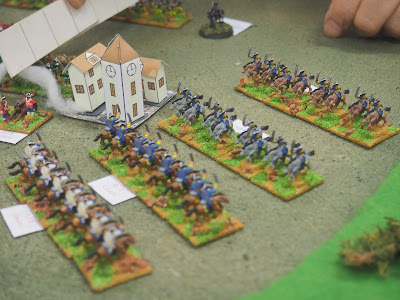 This is Caesar's force, attacking the Saxon left. 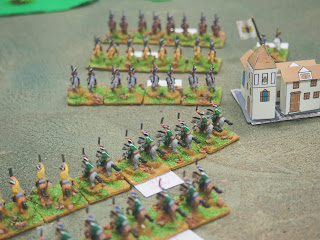 There was no point in holding back. In order to force morale tests on the Swedes, I counter-attacked with my horse. On my left this cost the Swedes a unit straight away. 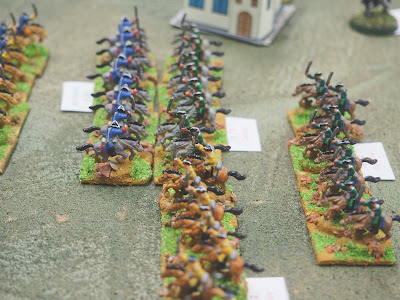 It also held Gary's attack in check as well. 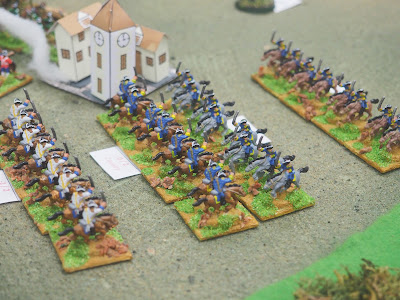 A view of the battle. 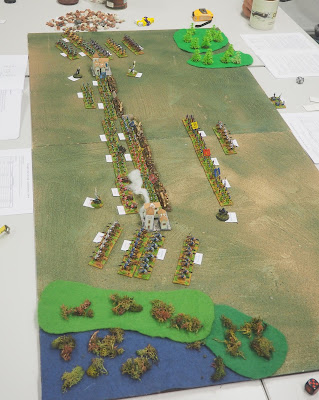 On the Saxon right, things went badly for Gary. His cavalry were pushed back and then botched a couple of activation rolls; in Twilight, any movement by a unit that is not just a simple move straight-ahead, is subject to a test to see if it takes place. Gary failed two rolls in succession, leaving his two units of cavalry disorganised and unsupported as the Saxons pressed their attack. 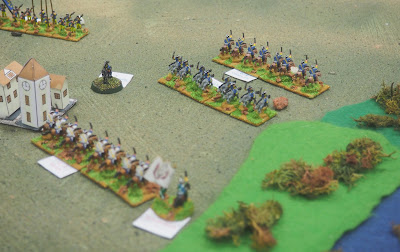 On the other flank the melee settled into a series of charges and countercharges, but the quality of the Swedish cavalry enabled them to overcome their initial reverse, and the Saxons were methodically eliminated. 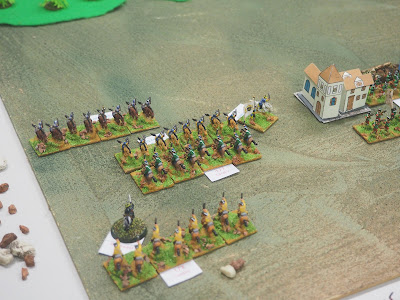 In the centre the Saxon artillery forced some of the Swedish infantry to rout, after a sustained bombardment lasting several turns. 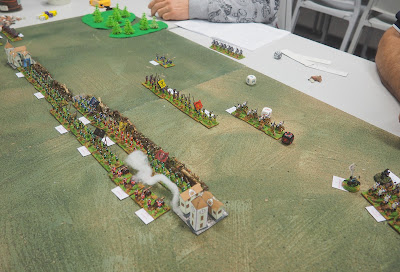 Russian allied infantry were redeployed to try and delay the victorious Swedish cavalry on the left. 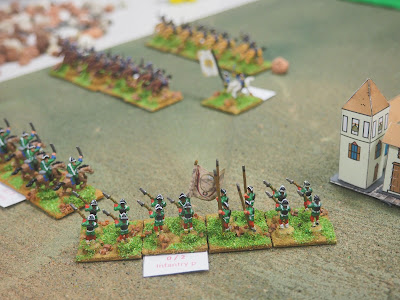 Both armies were actually on a morale knife-edge. The Saxons had taken a few casualties and were close to breaking, but the handful of Swedish casualties were enough to put them in jeopardy as well. Looking to achieve a decisive finish I went on the attack, with my infantry surging forward from their defences, five units to the Swedish two. 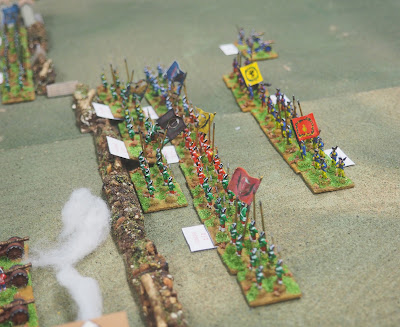 Another view of the whole battle. On the right Gary's cavalry have been pushed well back and were trying to regroup. On the left Caesar's cavalry was also reorganising. In the centre the infantry prepared to engage. 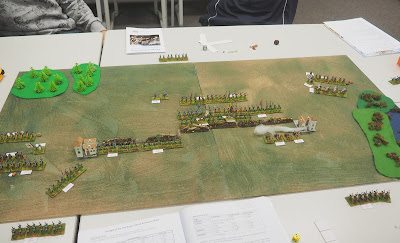 Swedish infantry are at a disadvantage in a firefight, so Gary counter-attacked. Or tried to; one unit refused to advance, but the other hit the Saxon infantry opposite it hard. The Swedes are better in close combat, and all the needed to do was break one Saxon unit to force an army morale check and break them all. 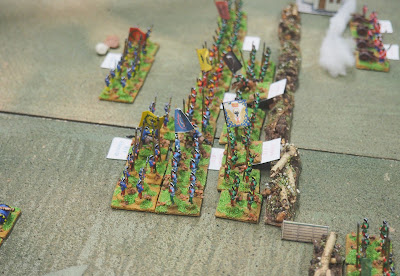 As it was, the lost of a final Saxon cavalry unit on the left was the clincher. This forced that flank to test morale, and it failed, routing the whole wing. This , in turn, forced an army check, which they also failed. The Swedes had won.

The game was closer than it looked; because their army is so small in terms of number of units, Swedish cavalry losses had put both of their wings close to their breakpoint as well. Had the Saxons survived into their own turn, it could well have been the Swedes taking the army morale test. A close result is always good for any scenario.

So how was the game? Well, there's no denying that the basic mechanisms of Twilight of the Sun-king are excellent. They give a quick game which seems to encourage historical tactics and deployments with, theoretically, the minimum of mental effort. We had an enjoyable evening, really we did.

The rules themselves are a problem. Gary put it best when he said that he felt that the rules book we were working from was only part of the game, and that the rest of it was still in the authors' heads. We certainly have a list of questions (which I will try and put together and send to the helpful Yahoo Group this weekend), but they weren't on obscure or unlikely situations; they were issues with what you would call basic game-play and which should have been covered at the playtesting or editing stage. A lot of gamers talk about how the spirit of a game means that two sensible players should be able to fill in the gaps in a ladylike or gentlemanly way but, really, if you've paid for a game you shouldn't be having to do this for issues like 'What happens if I'm forced to retreat and there's an enemy unit in the area behind me?' or 'Can I wheel as part of a charge?'. We found having to look up such basics frustrating.

And, on a pedantic note, if misuse of apostrophes grates on you like fingernails on a blackboard, this isn't a set of rules you'll want to be reading.

In terms of what it sets out to do, Twilight scores 5/5 from me. In terms of how it's implemented, especially since it's essentially the third iteration of this set, I can't give it more than a 3/5.

Update: One useful thing I did do was give each unit a label. This obviously had things like whether it was pike-armed, Ga Pa or galloping horse on it, but it also included two number - the Morale Test modifier and the number of Morale fails required to break the unit. Traits such as Elite, Determined, Small, Wavering and Raw all affect these numbers, so having them factored together and attached to the unit saved a certain amount of factor checking and looking up information.
Posted by Kaptain Kobold at 10:06