This weekend, Mrs Kobold and I went camping, in the lovely Nangar National Park between Cowra and Orange in central NSW. Since the weather looked like it would be fine, and we'd planned to spend a lot of time relaxing on the site rather than going for long walks or other expeditions, I decided to take a few of my 6mm DBA armies, and have a go at some games of DBA 3.0. This game is on my 6x6 list, and is one that I've not tried playing by myself; up until now I've had other people to explain the game as we went along. This would be my first attempt at puzzling the game out as I went along.

I actually managed to fit in two games, on successive days.

The first game saw The Kingdom of Strathclyde (the later Sub-Roman British list) facing Picts. The Picts defended but terrain placement saw the bad going their army relied on on one side of the board, which Strathclyde then chose as their side. This did leave the British deploying through hostile terrain (a rocky hill and a hamlet), but left the Picts fighting out in the open, where the British cavalry and spears would be at their best. 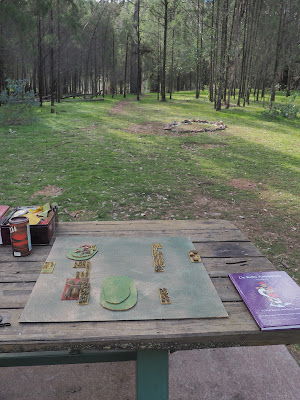 Here's the British advancing through the terrain. 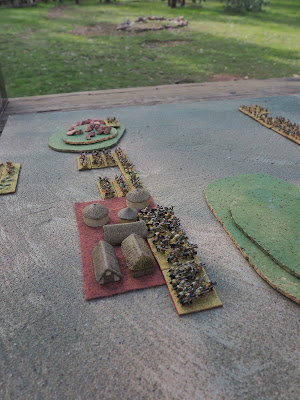 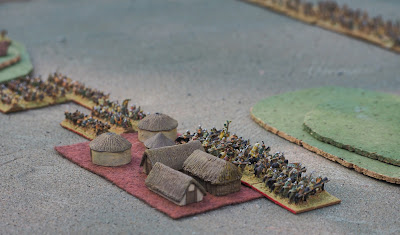 The Picts. Their light cavalry was deployed on their left to cover against outflanking moves, whilst their long-spear armed infantry formed a block in the centre, with their skirmishing archers covering the right. 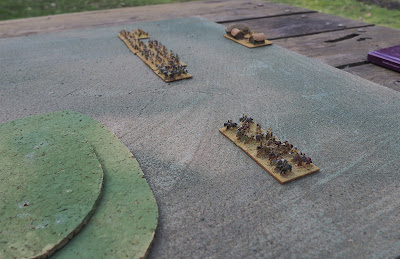 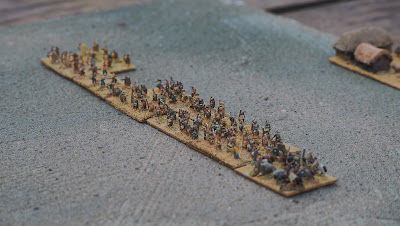 The Pictish archers advanced quickly, looking to take the hill and harass the British left flank. The British had deployed some archers on the hill, but they were very much outnumbered. 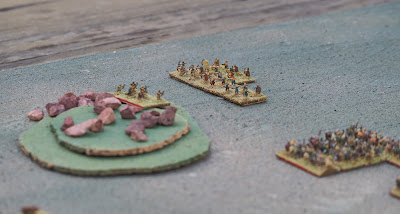 The two infantry blocks advanced towards each other. 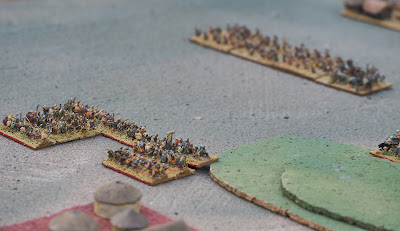 On the other flank, the British cavalry rushed over the hill in front of them, leaving the Pictish horse looking very outclassed. 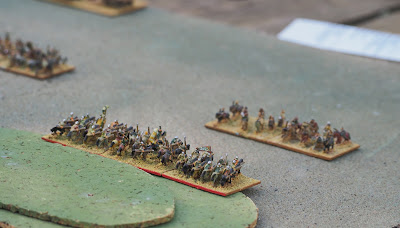 And so they were; the British cavalry cut them down fairly swiftly. The Pictish general moved into the combat to try and salvage the situation. 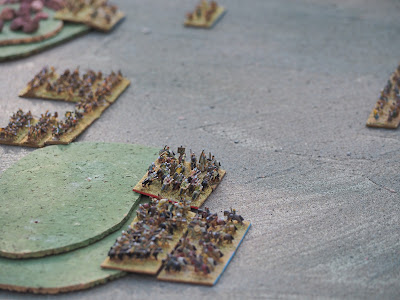 Meanwhile on the rocky hill, the British archers were overwhelmed by their Pictish opposite numbers. 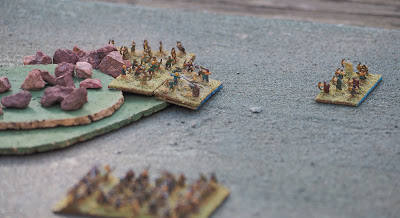 On the British right the cavalry combat continued. 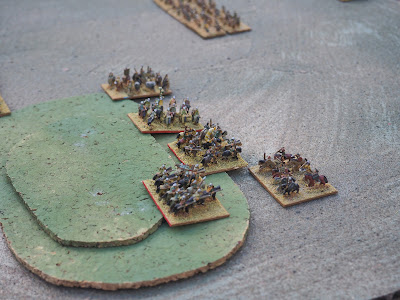 British spears moved up in support, putting the Pictish general in a very tricky position indeed. 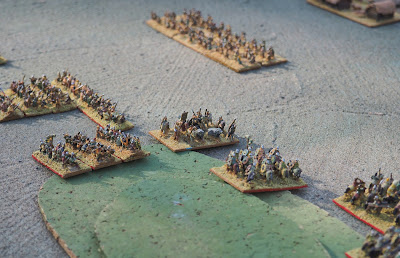 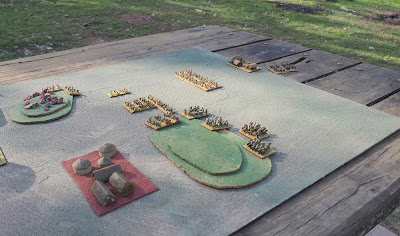 The Pictish general was surrounded, and cut down. This would have meant the end of the battle except ... 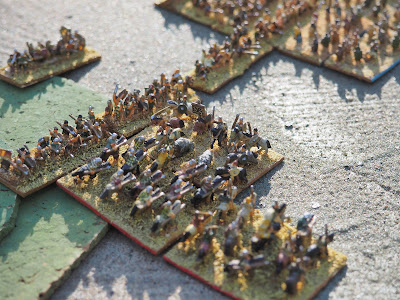 ... the Pictish spearmen charged their British opponents, catching one group in a deep column. As it recoiled, skirmishing Pictish archers attacked from the flank, and three elements of British infantry were lost. 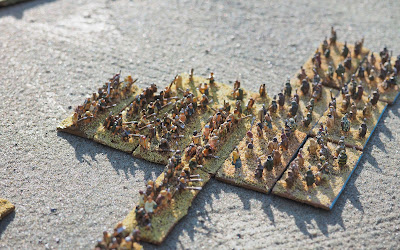 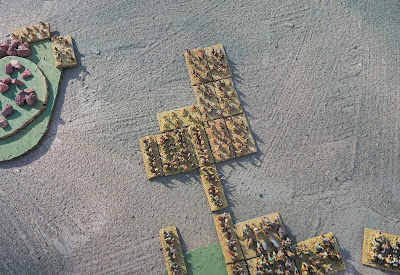 This left the losses even, at 4 elements each, so despite the loss of their general the Picts continued to fight.

However with no opponents facing them, the British cavalry charged into the flank of the Pictish spearmen. 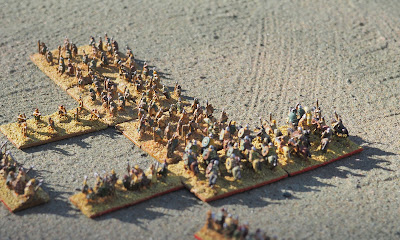 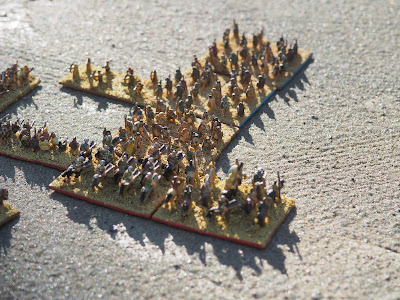 The loss of those spearmen meant that the Picts were now defeated. 5-4 to the British. 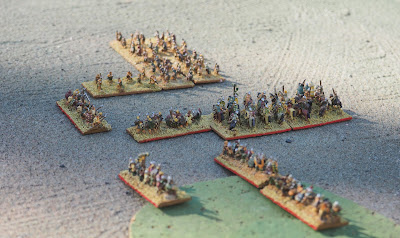 I learned that you don't stay in deep columns close to the enemy, and 'close' in DBA 3.0 means 'a long way away', because of the large move distances. I had one or two minor rules issues, to which I applied a mixture of common-sense and my knowledge of HOTT. Checking the diagrams and rules more thoroughly later on, I actually resolved them correctly.

The Picts really need bad going in order to force the British to fight on a narrow frontage. In that way they can double-rank their infantry (classed as Pikes), and get the edge against the British infantry (classed as Spears). A scattering of bad going also helps neutralise the British cavalry superiority. The Picts real strength lies in their superiority in Psiloi and Light Horse, both of which are tricky to bring into play effectively. The British army is a simple, no frills, DBA force: three Cavalry, eight Spears and a Psiloi. They just rolled their infantry forward, and used the cavalry to gain absolute superiority on one flank.

Here's a few pictures I set up after the game, when I decided that the light was a little better for photography. 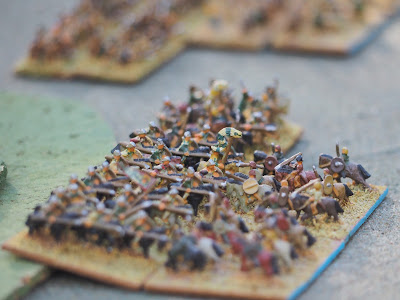 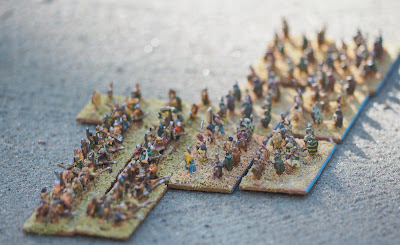 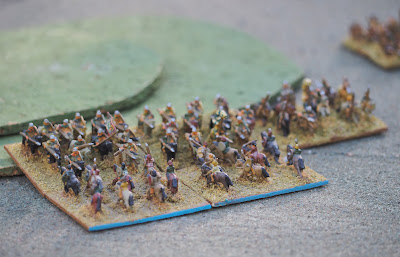