In my first 'Scum of the Earth' game for the Six by Six Challenge I tried and ECW game. For my second I decided to make use of the figures I had handy from out Fraustadt refight last Thursday (which we're doing again this week, if you fancy knowing what's coming up here) and play a GNW game. And, I thought, why not refight Fraustadt?

Now, one of the design philosophies of 'Scum of the Earth' is that its supposed to give a game which looks like a low-budget black-powder battle from a 70s/80s TV series, where they only had 200 extras to fight Waterloo with. So I scaled the game right back in terms of units. Here's the setup: 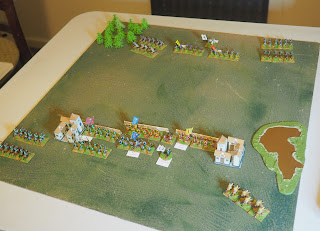 This is the defending Saxon/Russian army (all looking suspiciously Russian, as before. We know they're behind everything at the moment, so it's only appropriate.) 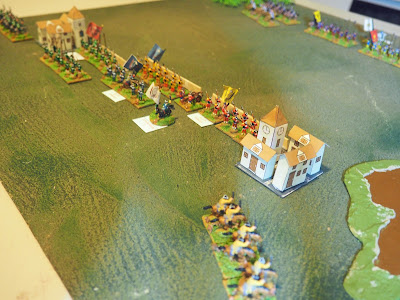 The attacking Swedish force was smaller, but I stacked on some extra traits to try and offset this. 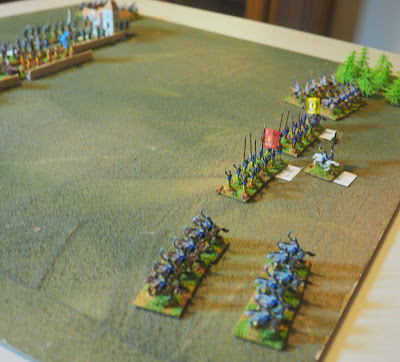 Most of the traits can be found in the rules. 'Knee-to-Knee' gives Cavalry a +1 when in melee with other Cavalry. 'Pikes' gives the unit a +1 in melee, but their firing is capped at 4.

I gave units a 6" musketry range, as for the ECW, but had them roll a DAV as normal.

The Swedes moves forward aggressively, with their cavalry sweeping forward to attack their Saxon opposite numbers. The brown area on the Saxon right is a frozen marsh (the battle was fought in Poland in February, so it was a bit chilly). 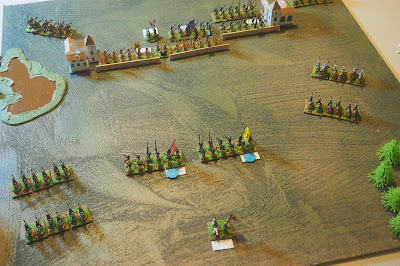 The Saxon left came out to meet the Swedes. No point in standing around really. 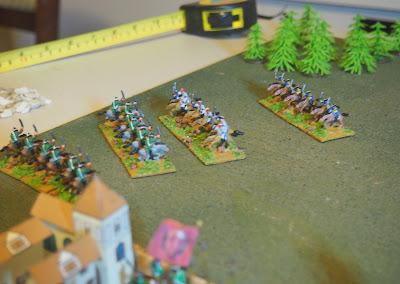 The Swedes charged, and cut through the first Saxon unit, which fell back. 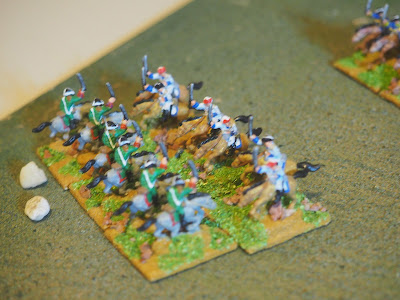 On the other flank the Swedes worked their way through the marsh with no difficulty. 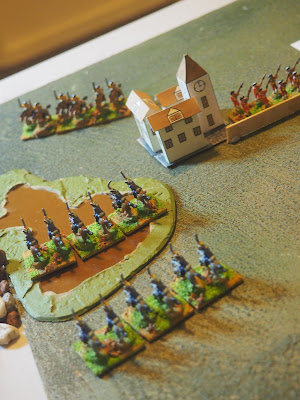 The Saxon artillery started up a deadly fire on the Swedish infantry in the centre, who advanced to just outside of canister/musketry range, ready to charge once their cavalry had made a breakthrough. 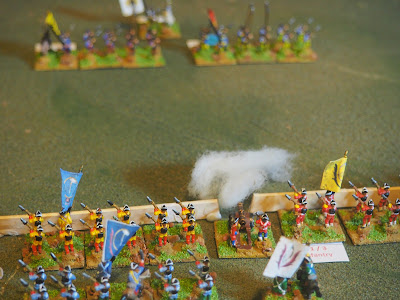 The Saxon cavalry on the left was now fairly well smashed up, but they had put up a magnificent defence, forcing one Swedish unit to rout and the other to fall back. 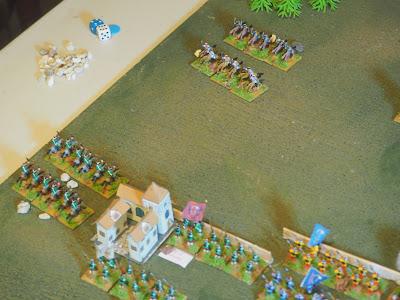 On the other flank, however, the Saxon cavalry pretty much fled the field after the first Swedish attack. 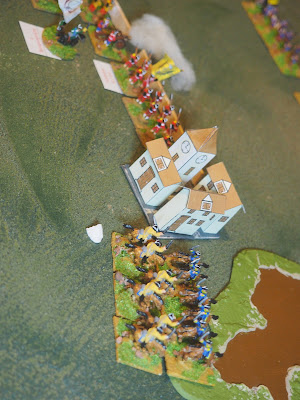 This put Swedish cavalry well into the Saxon rear. 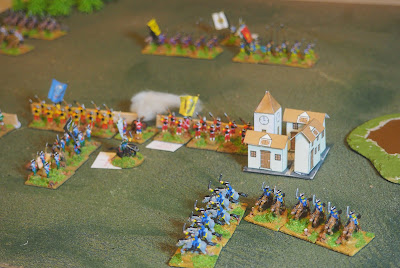 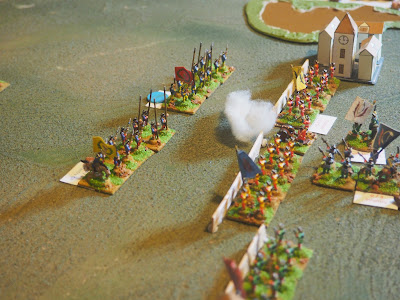 An overview of the battle. 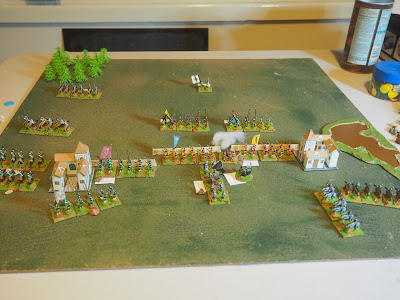 One of their infantry units faltered in the attack, already shaken from the earlier artillery fire. The other, though, pressed home its attack on the Saxon defences. 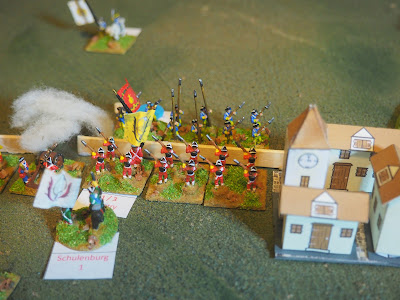 It was repulsed, but now the Swedish cavalry was coming up in support. 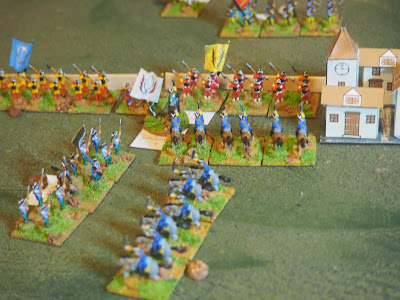 An attack from both sides! 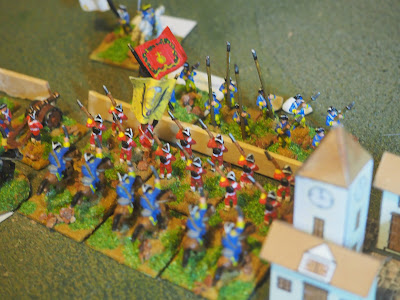 And still the Saxons triumphed. 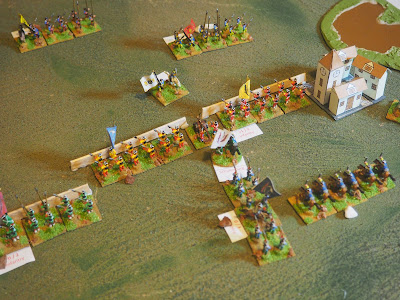 On the other flank the shattered Saxon cavalry was sheltering behind some wavering but fresh Russian infantry. 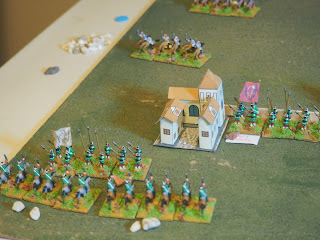 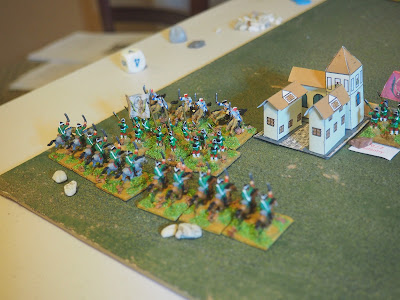 ... and the Russians broke, although they rallied rather than flee the field. 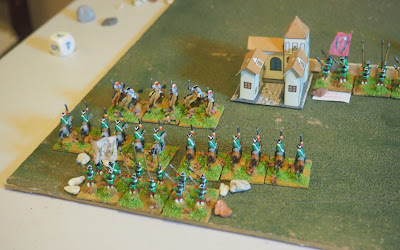 The Saxon cavalry counterattacked, and broke the Swedes, who fled. 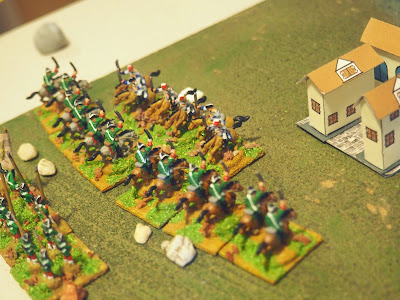 In the centre a Saxon unit fell back from the defences as the Swedish infantry pushed forward. However other infantry drove off more Swedish cavalry with some brisk musketry. 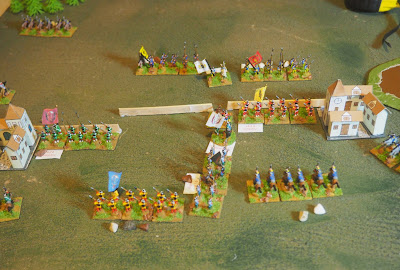 At that point I called a Saxon win. The Swedes still had a little bit of fight left in them, but really there wasn't any momentum left in their attack, and much of the Saxon line was still fresh. 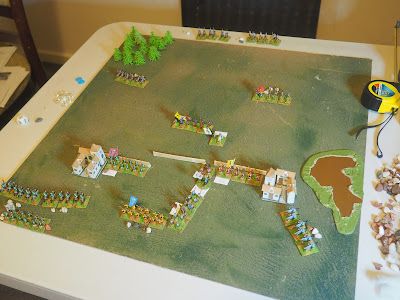 This is a difficult battle to balance, with the outnumbered Swedes on the offensive and, historically, pulling off a win. Twilight of the Sun-King seems to manage it OK without it looking too much like the Saxons have been hamstrung and the Swedes turned into supermen. With these rules I suspect it's the best approach; add more bonuses to the Swedes, and dump some more disadvantages on the Saxons. It was true that the Saxon cavalry on the left was lucky early on; they managed two Courage tests where they rolled a '1', allowing them to keep fighting, but rally they were a tough nut to crack for the Swedes.

Email ThisBlogThis!Share to TwitterShare to FacebookShare to Pinterest
Labels: 6x6, GNW, report, scum of the earth