One Hour Wargames - Scenario 19 - Blow From The Rear

For my next One Hour Wargames report I am moving into a different genre - sci-fi (of a sort) using my Epic 40K collection. This was mostly because of my stumbling across these WH40K OHW Rules from HERE, a sub-page of the excellent Grid-Based Wargaming blog. They nagged away at my brain all weekend, so I decided that I would have to give them a try. It was a simple enough matter to adapt them to my Epic 40K collection on its HOTT bases.

In this scenario one side is guarding two river crossings. The other side is attacking them (from the left in the picture below). However they have sent a force around the flank and, part way into the game, it will appear in the defender's rear at the top of the picture. The defender has a reserve, bottom-left, which cannot activate until after the flank march arrives.

Are you with me so far?

The rules use a square grid, with multiple units allowed in a square. Since the scenario uses a 3' x 3' board normally, I created a 6 x 6 grid to best represent it. I used a 2' cloth, so you can work out that the squares are 4". This would be quite adequate to hold my 40mm frontage Epic 40K bases without them looking too lost in the square.

I added a few random areas of broken ground - rubble and brush, which all ended up along or alongside the road. 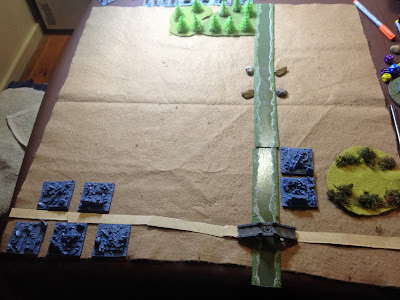 I decided to run Imperial Guard (defending) against Orks (attacking). Rather than six units a side I doubled up to twelve. I pretended to balance things as I classified troops, but have no idea if I really did so.

The armies were as follows (the classifications won't make much sense unless you read the rules):

The Orks could give one Troop unit the Deep Strike ability. I gave it to the Madboyz.

I hoped that a combination of assault weapons, plus the fast buggies would give the Orks an attacking edge, whilst the Imperial Guard had some nice defensive artillery, plus a couple of units capable of mounting a counter-attack.

The Guard set up their defence; infantry covering the crossings with some tanks in the centre to provide supporting fire. 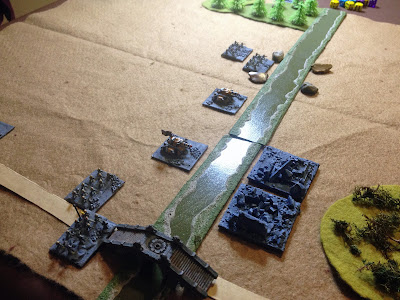 The artillery, Rough Riders and a tank were in reserve. The snipers were part of the river defence force, but actually appeared based on an initiative roll of '6'. 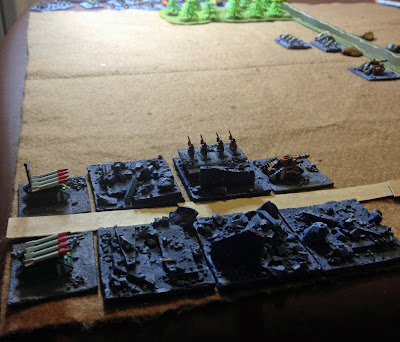 The first Ork unit appeared along the road - a Stomper. I changed the rules for roads. The author allows a unit on a road to move one square, then attack. I just allowed the possibility of faster movement with an attack only if you are a fast unit, as normal; if a unit is activated with a 5 or 6 and moves entirely along the road it moves two squares instead of one. 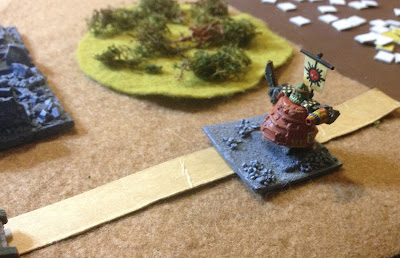 The Stomper was soon joined by a mob of Boyz and the Warboss. The tanks and buggies would be the flanking force. 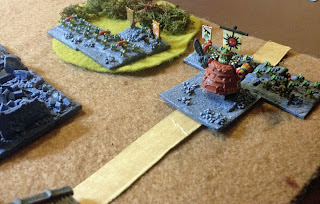 The Stomper assaulted across the bridge. 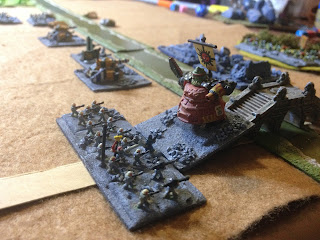 It was followed by a horde of Boyz. 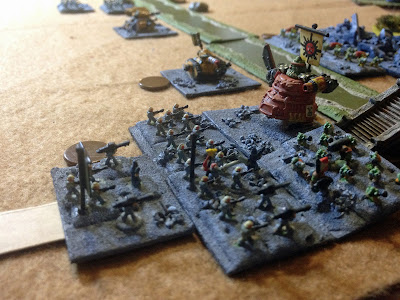 Disaster! Excellent shooting by the Imperial Guard, inspired by the Commissar, blew up the Stomper before it had a chance to score any real damage. 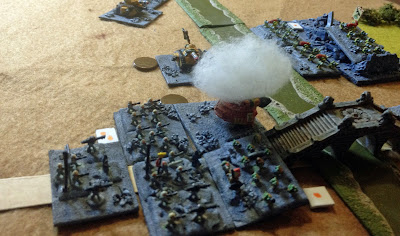 The Orks now committed to throwing all of their infantry across the bridge or provide supporting fire. The guard responded by mowing them down in droves. 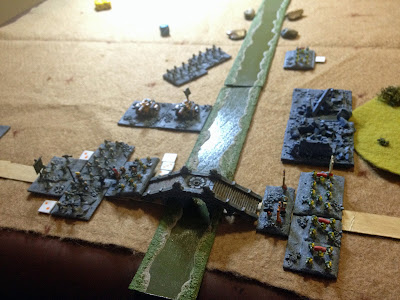 At that point the battery on my phone ran out, so I put it on to charge and carried on with the game, accepting that there might be no more pictures.

The Ork infantry pushed as hard as they could, and the Imperials took some losses, but the Orks were soon down to a single infantry unit and the Warboss. At that point their flank-march arrived, and I had enough power on my phone to take some pictures. 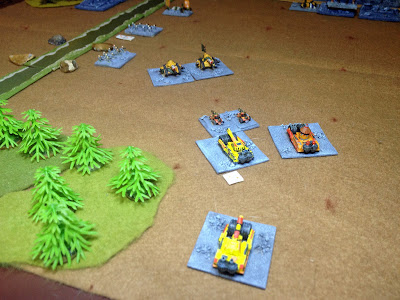 The Imperial Guard had deployed their snipers in the wood to harass the armour as it arrived, but the buggies wiped them out in passing. However the Orks also landed the Madboyz by the ford, where they were cut down by Guardsmen before they could launch an attack. So much for the special units.

The tanks and buggies pushed forward, but the Imperial Guard sent Leman Rus tanks to hold them, supported by fire from the now activated Manticores. 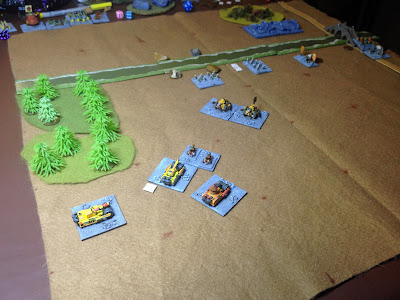 By the river the Ork Warboss assaulted some Guard infantry. 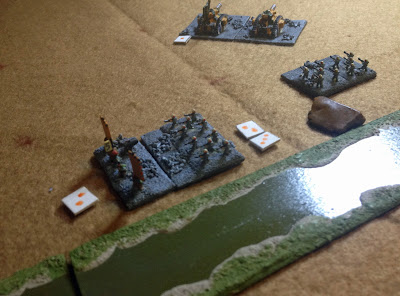 Meanwhile the Commissar held the bridge against the last mob of Ork infantry, until they overwhelmed and killed him. 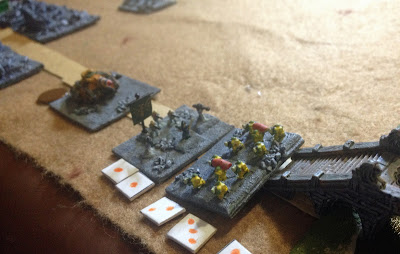 The Warboss defeated the first unit of Imperial Guard infantry, but was shot down by the second. 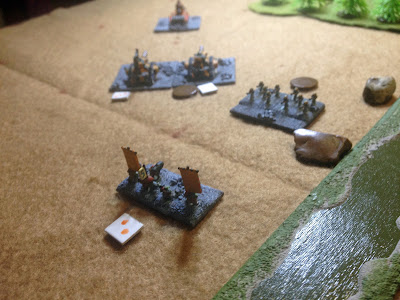 The Ork infantry at the bridge were wiped out by fire from the Manticores. 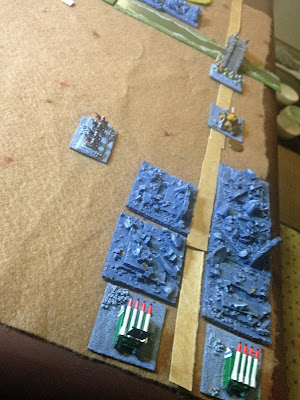 The flank-march never got anywhere. Fire from the Imperial tanks, plus artillery support destroyed the buggies, then picked off the tanks. The Orks were soon left with one vehicle. It was Turn 10 of 15. I ended the game. 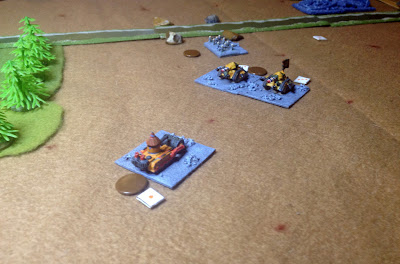 I never have much luck with the attacker in this scenario. They start with half of their force opposing two thirds of the enemy force defending the river; odds of 3 to 4 against them. It's true that they don't have to attack, but in the OHW rules the defenders have the range to engage the attackers as they enter the board, and can spend six turns picking them off before the flank march arrives. The there is time to turn to face that and defeat it as well. In these rules the Orks could have held back because the range of most weapons in no more than one square. I added the rough going to provide some terrain interest, and one patch would have allowed the Orks to pepper the bridge defenders with fire from the safety of cover. So possibly a less aggressive approach was called for, rather than trying to force a river-crossing against the odds. Indeed the attackers don't need to actually cross the river; they win by there being no defenders within a certain distance of either crossing, so dominating them with fire is a possible strategy. One to try in a future game.

As for the rules, they were fun to play, although I found a few areas I wasn't sure about and others I wasn't happy with and would probably change slightly. I can see the initiative system offering some interesting choices and decisions in future games.

This is the first of these reports to use a gridded board.

Follow the rest of the scenario refights HERE
Posted by Kaptain Kobold at 22:11