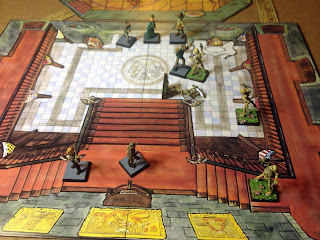 In the comments on my Fu Manchu vs SAVE game I was asked if I could post the scenario so that others could have a go. So here it is.

Actually that's a lie. The scenario I played was the 'initial draft' and, to be honest, it was broken in a few places. Indeed I changed a few elements of it as I went along, to make a better game. That's a bonus of solo gaming; sometimes you can change the game without upsetting your opponent,

What I'm posting here is the scenario as it is now, after a couple more games and a few minor and not-so minor revisions.

So the scenario, in case you didn't get it from my writeup, is that Fu Manchu is in a big old country house and about to perform a mystic ritual that will do something unpleasant. Envoys from SAVE are rushing to stop him. They must fight their way through his minions and prevent the ritual from being completed.

Here are the forces I used:

As you can see, Fu Manchu's force isn't strictly legal according to the rules, but who cares?

The board is laid out as follows, using GW's Halls of Horror floorplans, or your own facsimile thereof: 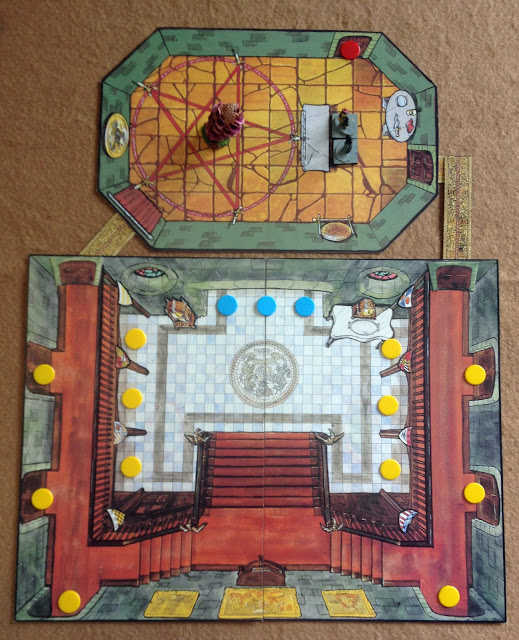 There are two short corridors linking the doors at the end of the landings to Fu Manchu's chamber of sorcery. the one on the left is short and straight. It is intentional that the one on the right has a turn on it, as it means that it takes an extra turn to traverse.

I put an Unearthly Horror in the pentagon in the centre of the pentagram. This is merely terrain, blocking both movement and line of sight through the pentagon. The altar blocks movement, but not line of sight. It counts as cover.

Stairs are obstacles. You stop when you reach them. On the next turn you can move up or down the flight of stairs, and continue beyond them; moving off a flight of stairs is not a terrain change.

A figure must stop when they land on a door. They can then move off it into the area beyond on their next move. Basically a door exists in both 'areas it connects.

The scenario starts with three SAVE envoys positioned on their start points. Fu Manchu gets two skeletons. They are positioned randomly; there are twelve possible entry points so I'll leave it to you to work out how to do that. Only one figure may be on an entry point at a time; in order for it to be used for reinforcements the figure must be moved off it.

Fu Manchu and his Daughter deploy in the chamber, adjacent to the altar. Fu Manchu must remain adjacent to his altar until a SAVE envoy enters his chamber. He may cast spells or use his Leader ability normally, however. His daughter may move normally. Note that, as a Witch, Fu Manchu can trace line of sight from his daughter. I allow him to apply this to his Leader ability as well as spell-casting.

Both sides get reinforcements. These can be deployed on an entry point as an action or reaction by that figure. SAVE can only use the three blue points, and then only if they are clear. Fu Manchu's minions randomly determine their point of entry. If it's blocked, then roll again. You cannot block an opponent's entry points; shuffle figures around if necessary. However figures cannot enter straight into close combat.

Fu Manchu has unlimited skeletons, but can only have up to six in play at any given time. The mummy (Lot 249), Jack the Ripper and Hassan the Silent are lost for good if they are killed, so time their deployment wisely.

Once per game Fu Manchu may bring on a character on the red entry point (the side door into his chamber).

Fu Manchu may never have more than 6 Skeletons in play. However there are unlimited numbers of them available - any Skeletons destroyed are returned to the pile of potential reinforcements.

From turn 11 onwards Fu Manchu may begin performing the Ritual. The Ritual is a spell, with a bid minimum of 4. It can only be cast as an action (not a reaction), so Fu Manchu must have the initiative. Roll a D6 for each point bid. If any of them are a '6' then the Ritual has succeeded. If Fu Manchu casts the Ritual three times, then he wins.

Victory: Fu Manchu wins if he successfully performs the Ritual, or if SAVE have more dead figures than living. SAVE win by killing Fu Manchu.

I have played this through a few times, and SAVE have never won. However in all but one game they have fought through to the chamber and engaged Fu Manchu, coming close to killing him in a couple of times. So if the balance is out, it isn't out by much. It's a hard game to create balanced scenarios for, because it is very random in places. It tells a great story, though, however it pans out.
Posted by Kaptain Kobold at 19:29