The new edition of HOTT contained a few new army lists, some of which I contributed. One of these were a pair of lists for Australian Aboriginal myths and legends, so I thought I would showcase the two armies I have produced based on them, They both date from ten or more years ago.

Here is the Aboriginal army. It consists of: 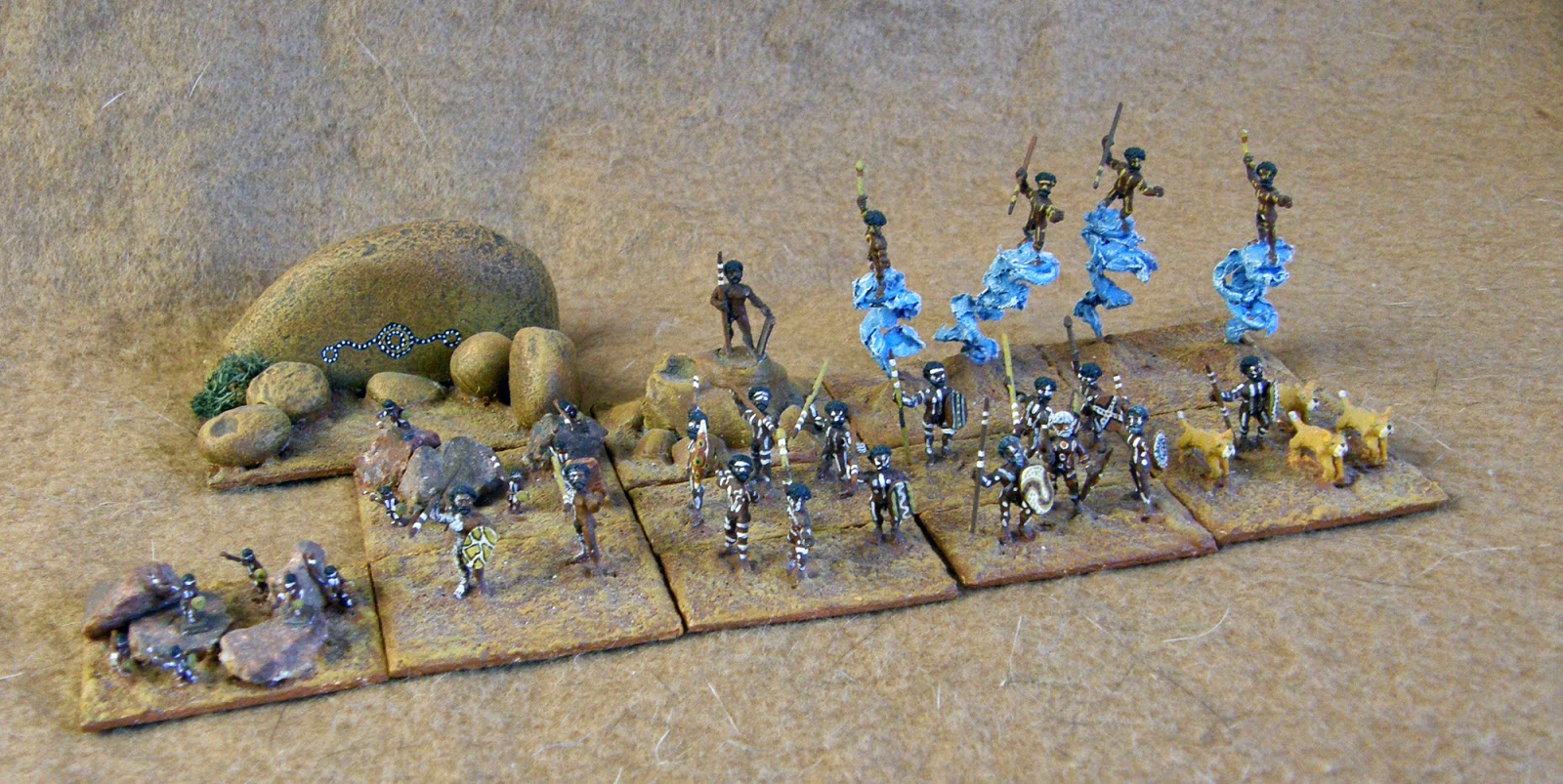 The core of the army are the warriors, led by their wirinun (a kind of shaman), the white-bearded gentleman in the middle of this element. Although armed with ranged weapons such as boomerangs (although some are just used as hand-weapons, and few designed to return) and spear-throwers, they did not seem to be in a dense enough formation to count as Shooters. It's an option though.

The Wirinun could be classed as a Magician, but true to many other cultures around the world, offensive magic is generally regarded as a Bad Thing, so I would reserve it for morally ambiguous or evil armies only. 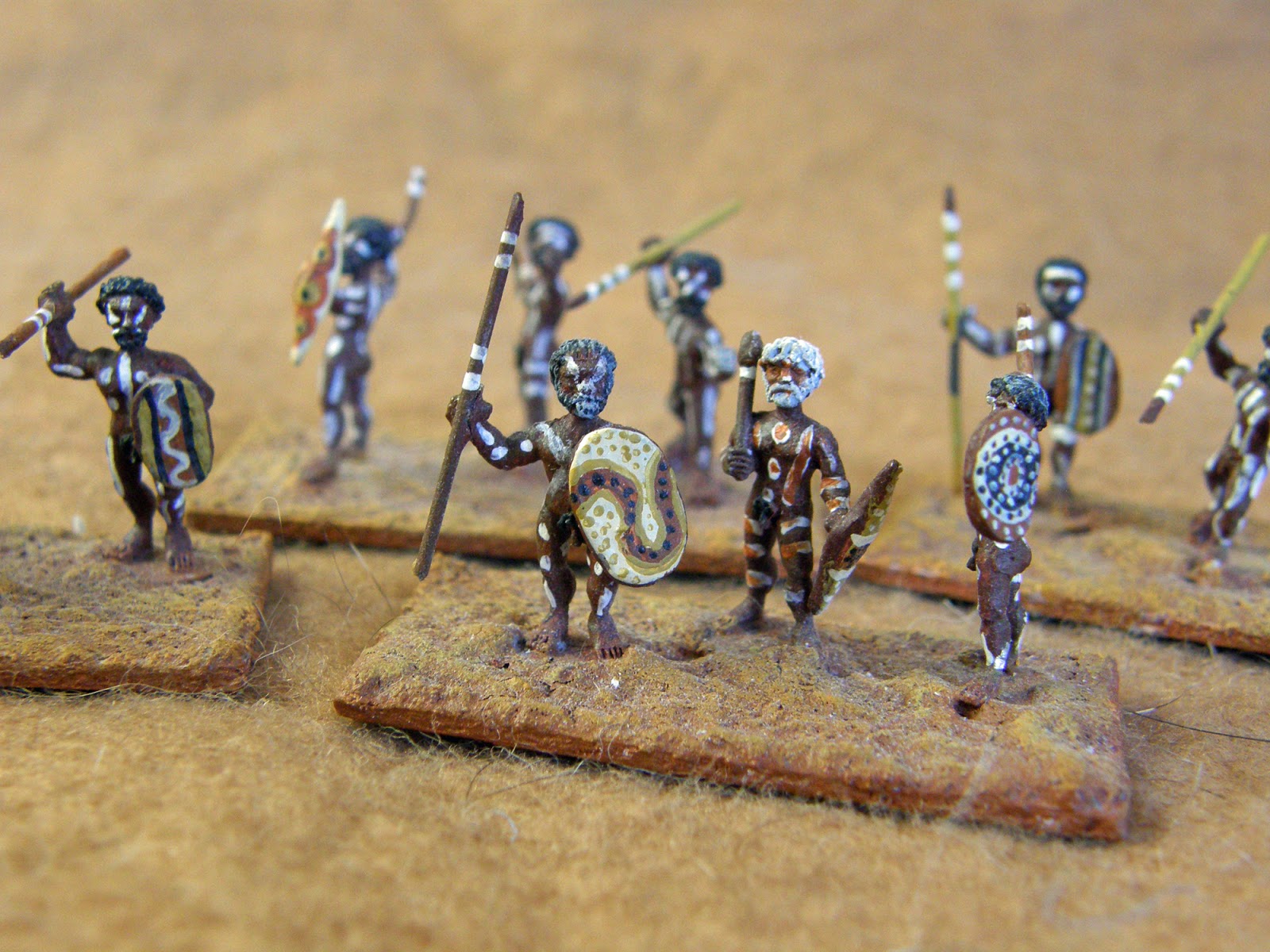 The figures were from Feudal Castings and are true 15mm. I don't know who makes them now. It was a good value pack - 24 figures, plus assorted weapons and shields. 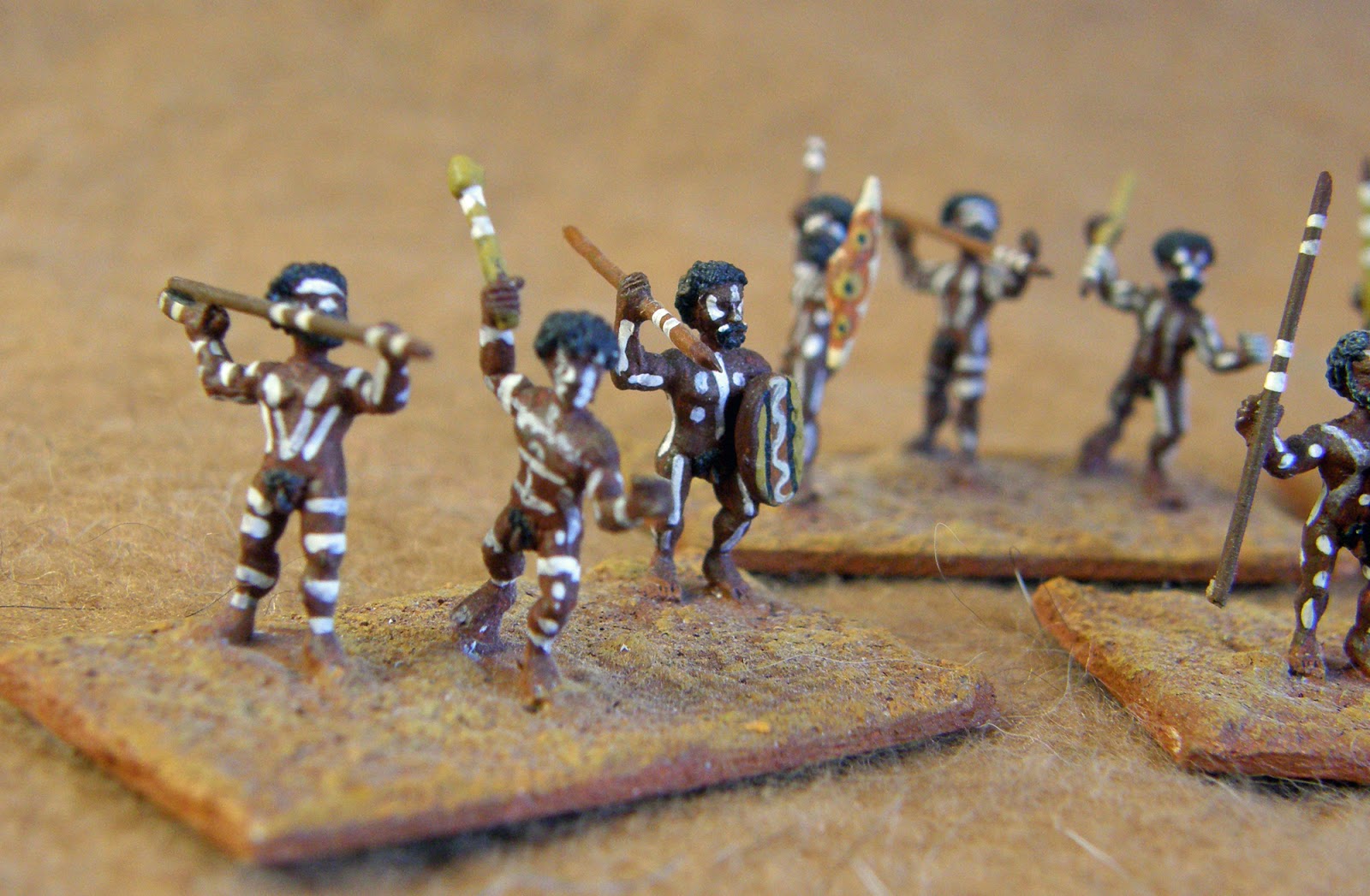 I indulged them in plenty of war-paint and decorations. 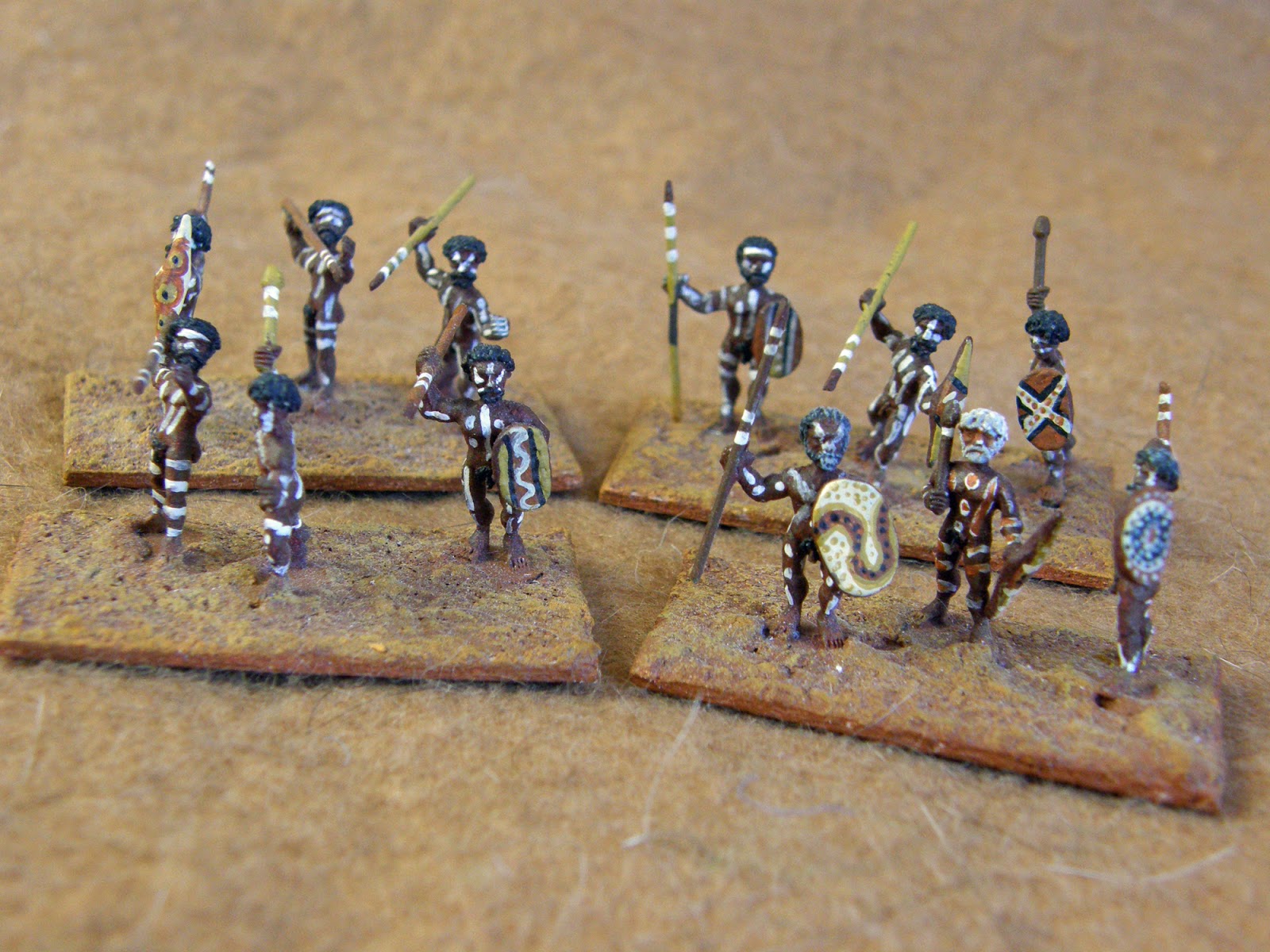 The Winjarning Brothers appear in a number of legends, travelling the country righting wrongs and defeating monsters and magicians. They too have war-paint, but to show them as outsiders it takes a different form to that of the warriors. 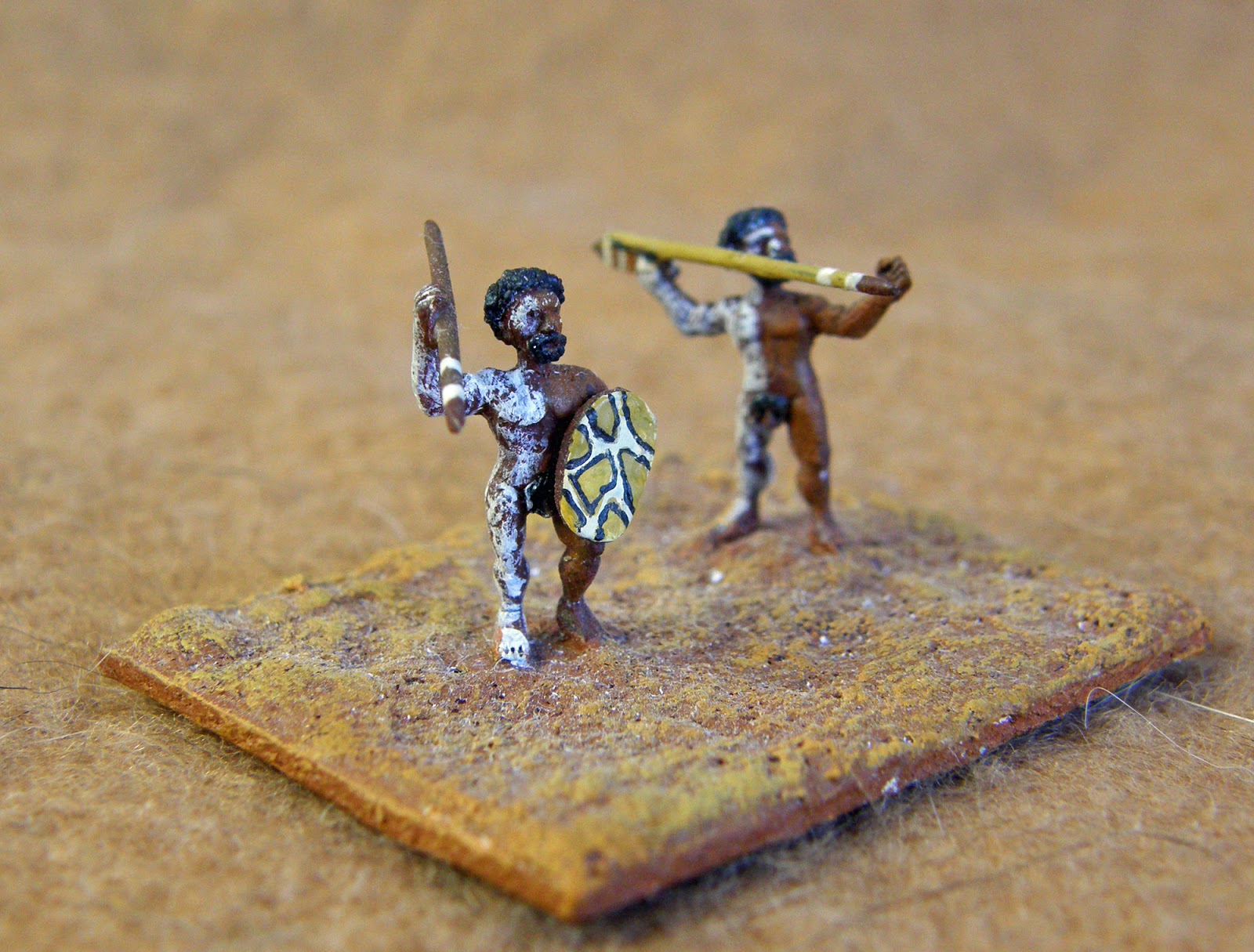 Baiame is the Creator. In a few stories, however, he becomes directly involved in the affairs of his creations. 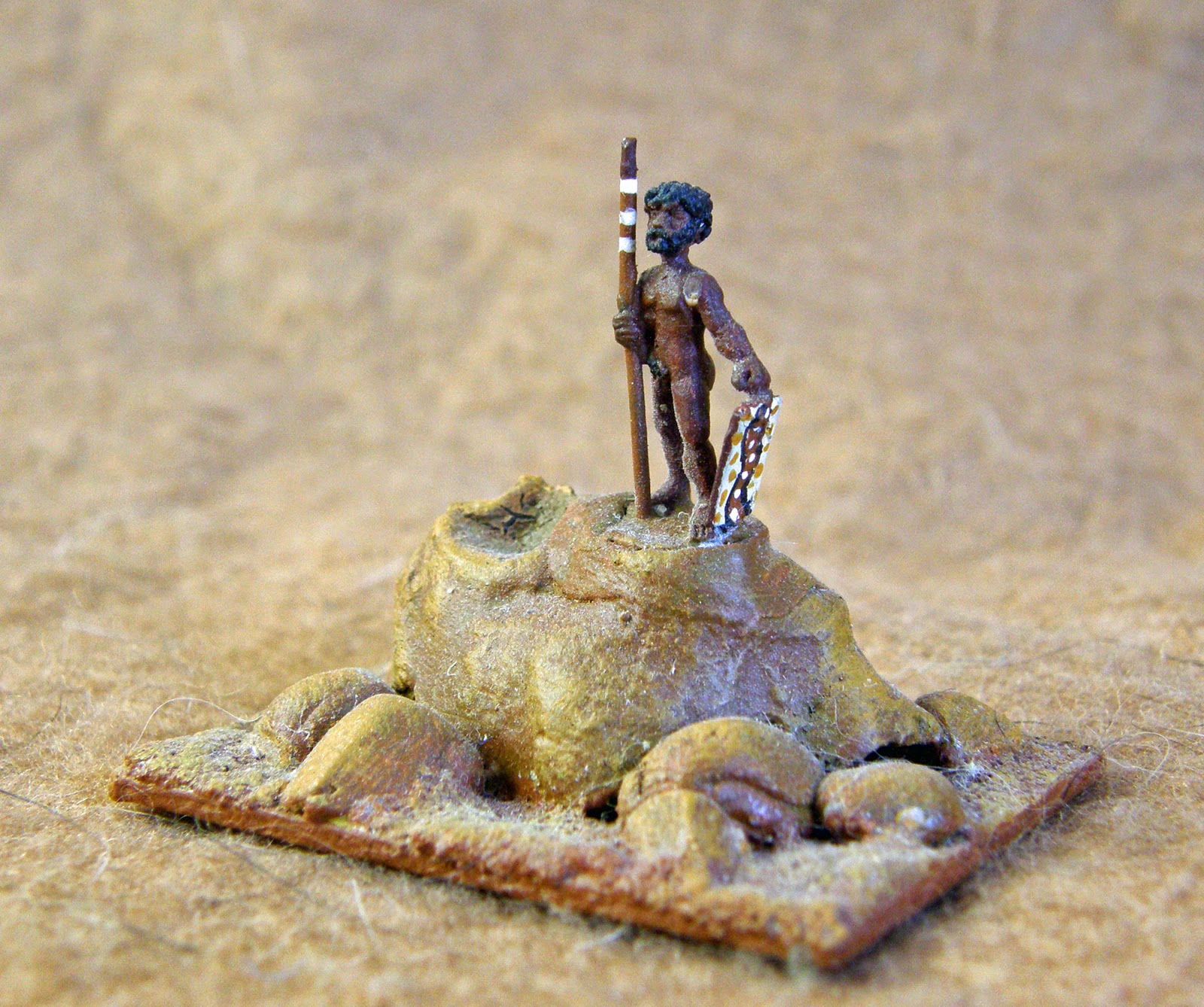 Tuckonies are tree-spirits, and are very small - no more than a couple of feet tall. They have high squeaky voices. Mine don't have any trees, but bear this with great fortitude. For figures I used 6mm Mahdists and Zulus from Heroics & Ros. 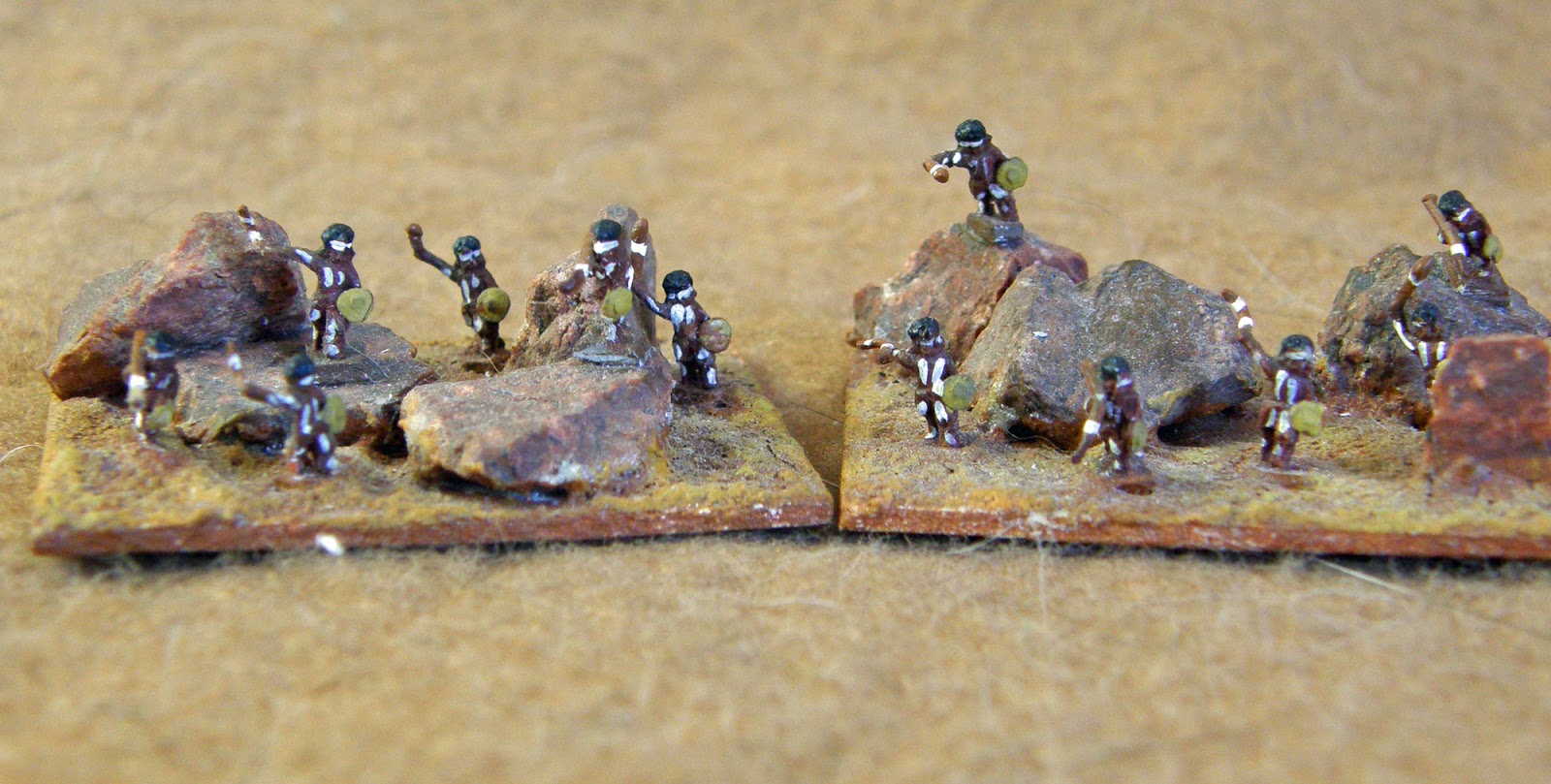 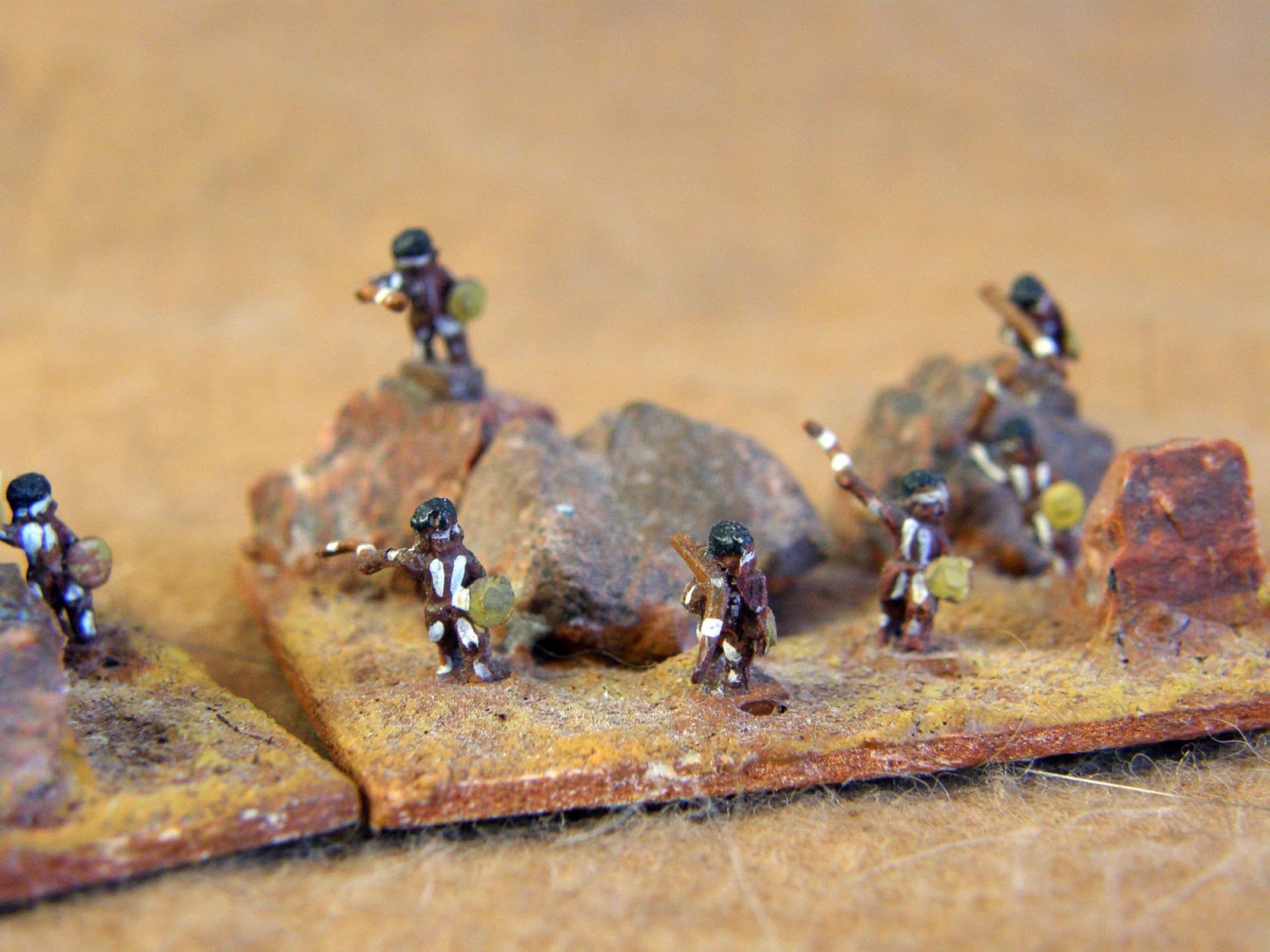 I'm not sure who made the dogs upon which I based the dingoes. The ears were modelled with modelling putty, so I'm guessing that they were something lop-eared before. 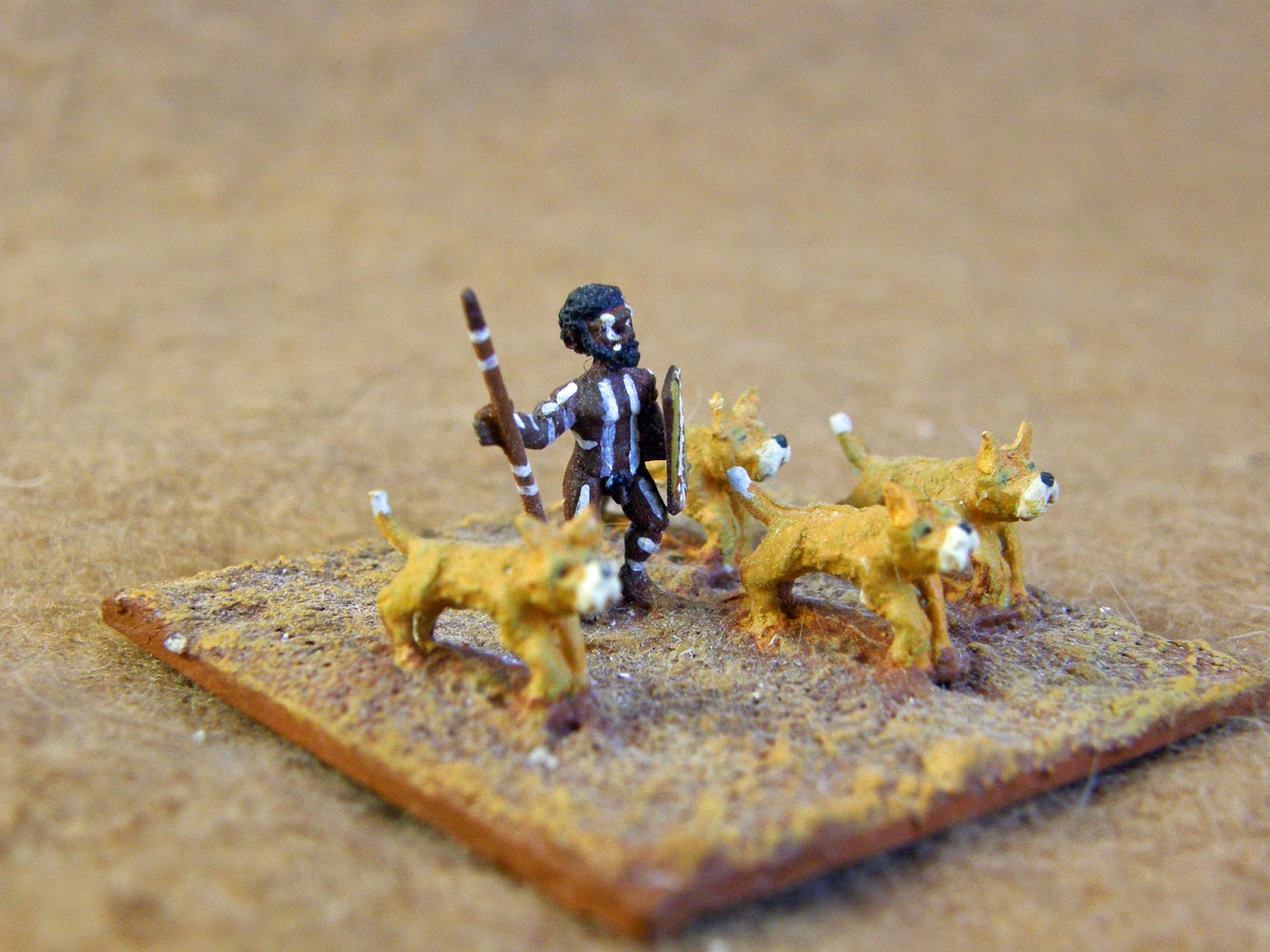 Warrawilberoos are whirlwind spirits. I chose to depict them as warriors riding on pillars of wind, made from wire and tissue-paper. 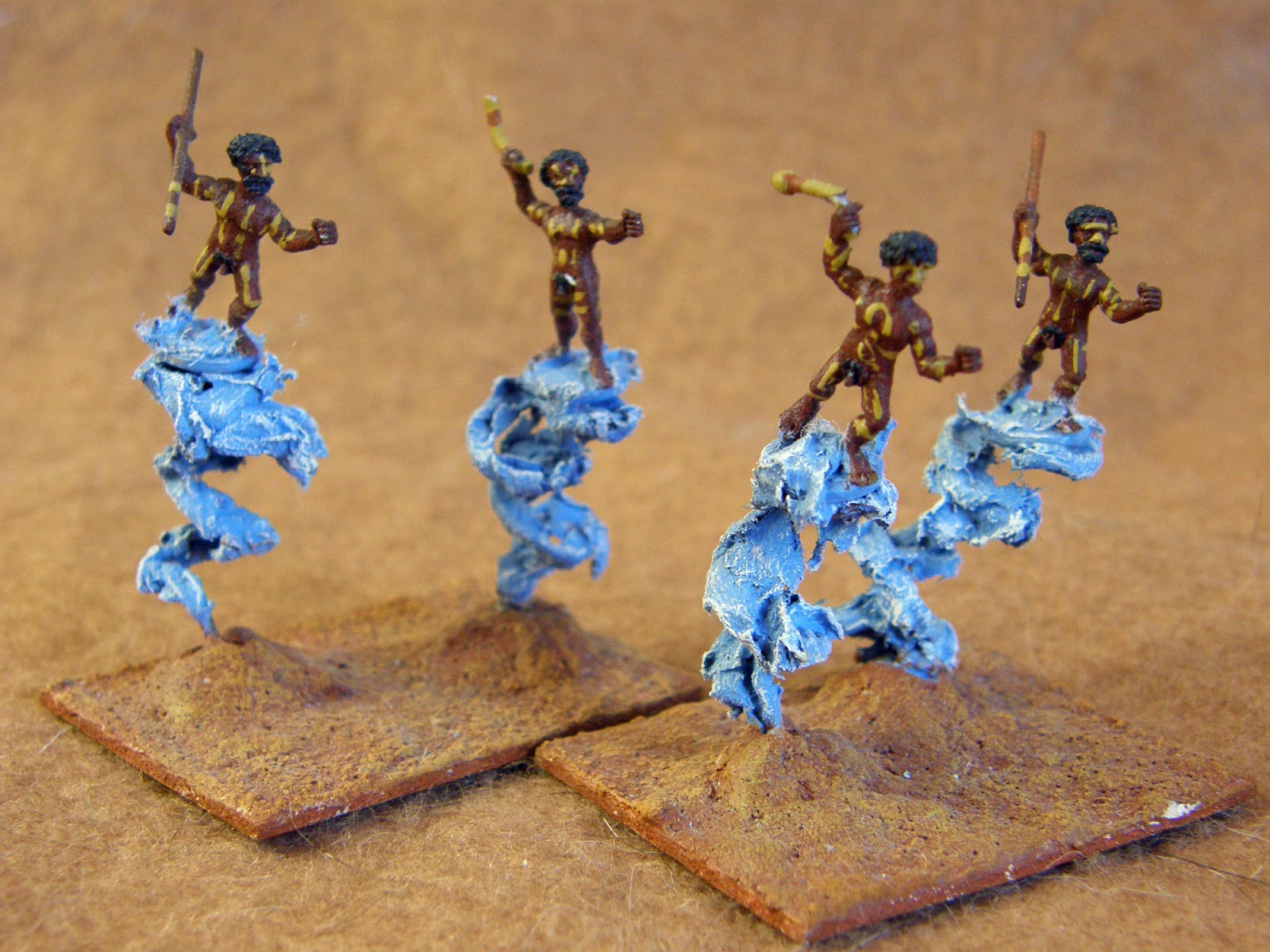 The stronghold is a simple affair made from painted stones. 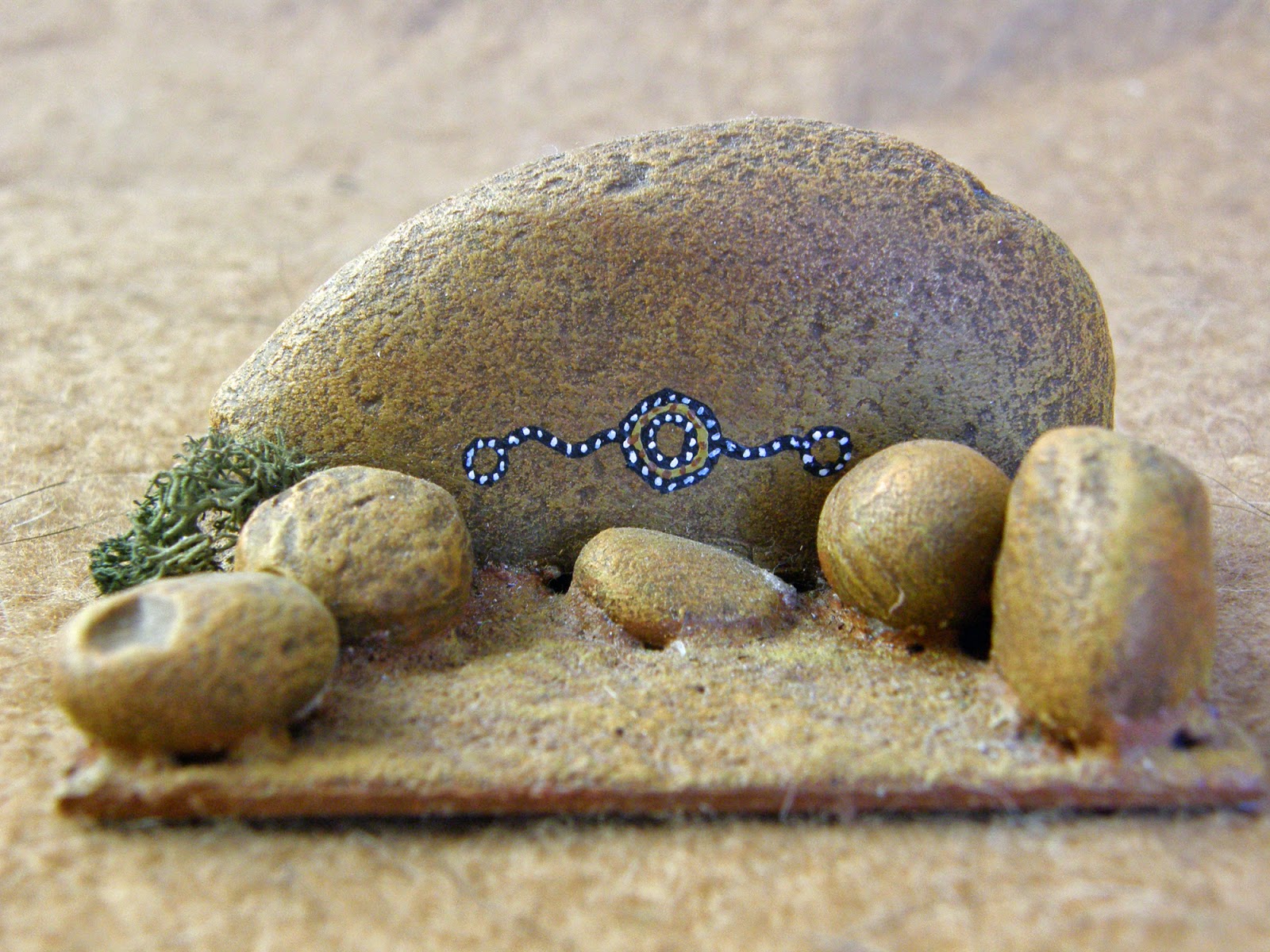 With the experience of many years I now look at those bases and think that they are little sparse in detail, but I'm loath to do anything about it because I like the colour and am not sure I could ever reproduce it.

This army has performed admirably over the years, with the Hero and the Warband providing some punch and the other elements tagging along in support.

In my next post I will look at their opponents, the Horrors of the Dreamtime.
Posted by Kaptain Kobold at 17:05