This was our first attempt at running an historical scenario for Longstreet. Four of us had a go at the 1864 Battle of Monocacy, where Lew Wallace delayed Early's Confederate troops for just one day but, in the process, probably saved Washington from Confederate attack. Playing historical actions is always a good test of a set of rules.

Caeasr adapted the scenario from one in the old 'Bullets and Dirt' booklet by George Anderson and Ryan Toews. We used 15mm figures based on 1" stands. Mark put together the lovely terrain.

Caesar and I took the Confederates; he took Ramseurs's force and assaulted the bridges over the Monocacy, whilst I had Gordon and Breckingridge's flanking force. Ralph and Mark took the Union.

I think this was an ambitious scenario to play in a short evening; it took a while to set up before we even started playing, some of which was sorting out the card decks. But once we started it rattled along very nicely. Caesar assaulted the bridges, and the Union shifted troops to meet him. My troops had a long march across some rough ground, and barely got into action before we had to call time. Caesar had taken quite a lot of casualties by this stage; the Union didn't have to worry too much about my troops and were able to concentrate their efforts on him. It turned out that our plan - Caesar demonstrating against the bridges whilst the flanking force went for a concentrated assault on the Union far left - wasn't far off the original.

If we played it again we would have the main Confederate force starting closer to the Union lines, so that it would be harder to defeat them in detail. This is always an issue with adapting scenarios from one set of rules to another; issues of timing and distance based on ground-scale and movement rates. Regardless it was a fun game, and playing an historical action was very satisfying.

There is, of course, a gallery of photos.

A view from behind the Confederate flanking force, looking across the rough ground to the Union lines. Caesar is just deploying his troops in the distance. 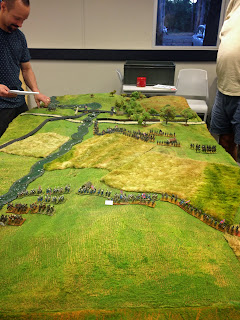 The main Union line. Their cavalry did lots of marching to and fro, and no fighting. 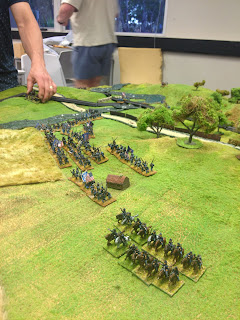 Mark studies the oncoming Confederate hordes from a distance. 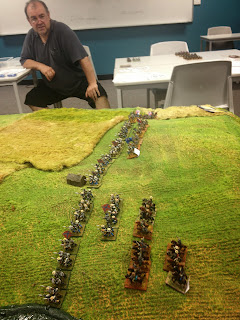 Ramseur's Division prepares to assault across the river. Just by the railway bridge you can see a Maryland regiment which held off several assaults during the course of the battle. 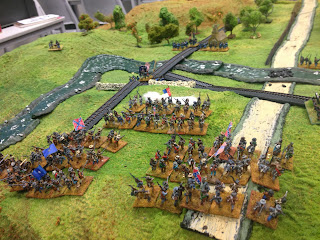 The Confederates continue to advance. 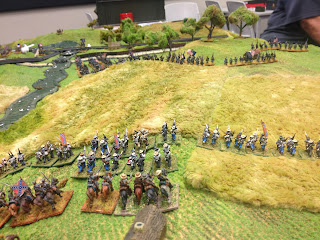 Fierce fighting across the fords and bridges. 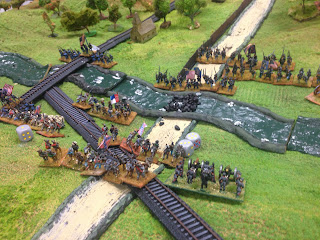 A close-up of the Confederates. 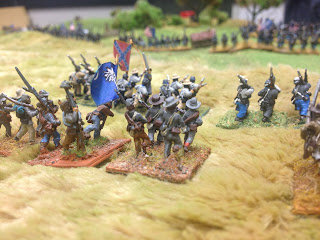 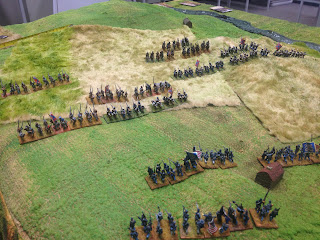 And a view from behind the Union lines, as the Confederates begin to concentrate on their left. 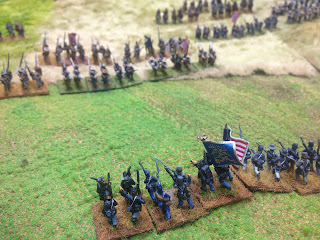 An artillery duel across the river. This was the final position in that area. 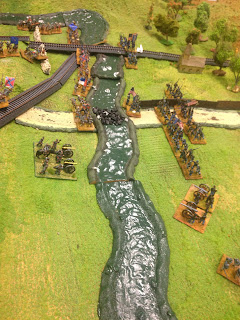 At the top of the picture the Confederates had just got into action. Otherwise this part of the battlefield was still quiet at the end of the game. 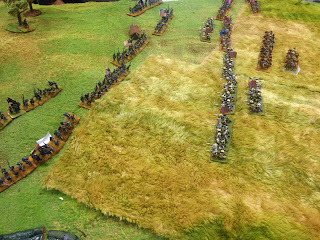 A final shot of the battle when we had to call time, showing the great terrain set-up. The pictures actually don't do justice to how nice everything looked. 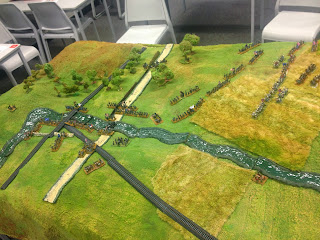 So, did Longstreet work for an historical game? I would say that it did. although I think it's always going to be hampered by the One Brigade to One Player nature of the card play. As I said earlier, the only change I'd make to this particular scenario is to reduce the distance between Gordon/Breckinridge's troops and the Union line; they probably need to start a couple of turns close. This will force the Union to decide how best to deploy their troops to meet two nominally coordinated Confederate attacks.

Thanks to all involved for putting on a great game.

(A second report, on the night's Blitzkrieg Commander game, will follow later.)
Posted by Kaptain Kobold at 09:01