The Tribe of Gong - Autumn

For the Autumn game I went with the suggestion in the rules 'Opportunity Knocks'. This scenario starts with no on-table beasts. The hunters are simply on a food-gathering exercise - each are of terrain on the board can be explored, and will have nuts, berries and fungus for the hunter to collect. Maybe more nutritious small animals. But, maybe, predators are lurking in the underbrush as well. Only the dice know.

The hounds stay at home in this game.

The hunters start in the middle. I had two hills (easy to move around on, but not offering much in teh way of food), two areas of tricky ground (a balance of reward and effort) and two thickets (slow movement, but full of good stuff to eat). The game is limited to eight turns, and the hunters must find over 10 Bulk of food (2 per hunter) by the end of the game. 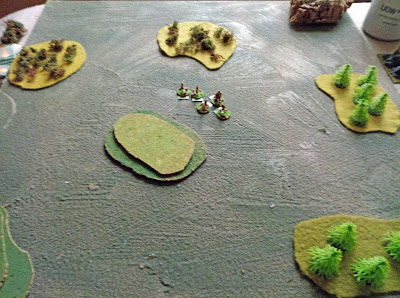 Brell and Grub went to check out an area of brush. Brell found some intersting fungi, tasted it and regretted it when it urned out to be mildly poisonous. 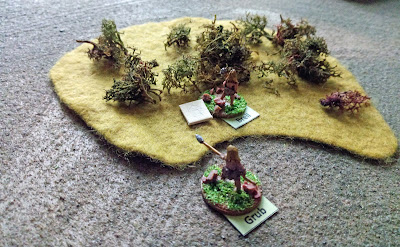 Vikk and Ron explored the woods and found plenty of pickings. 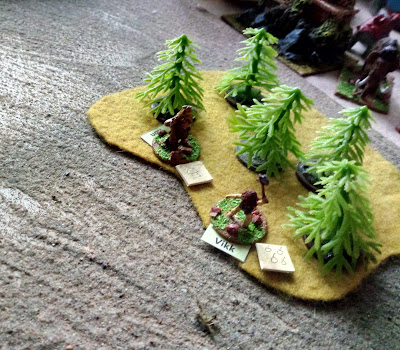 Grub dusturbed a critter! Critters are small animals that hide in terrain. When disturbed they react by running to the next nearest terrain item before going to ground. 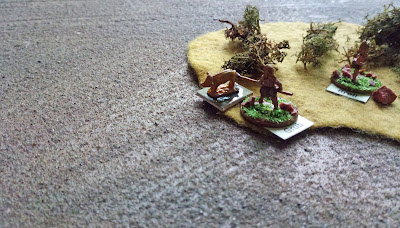 Frun had positioned himself on the hill in the middle of the board precisely for dealing with flushed-out critters. He brought down the beast with one arrow. 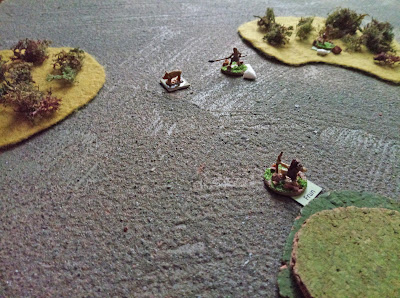 Brell found another beast, and frun got that as well. Frun really is the top hunter in this merry band. 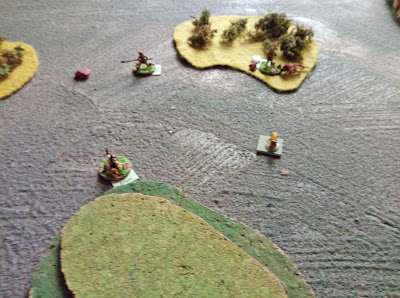 But Frun couldn't get all of the animals. Ron discovered one, which escaped to the brush Brell was searching. 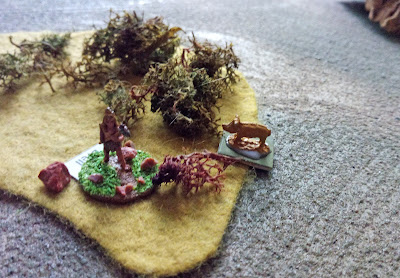 Frun found one himself, and again was unable to kill it before it escaped. 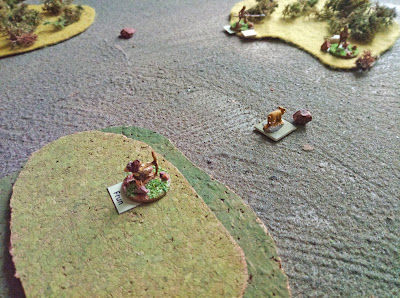 Meanwhile Ron also discovered that not all fungi is good to eat.

The hunters had discovered a fair bit of food, but still needed to get a good haul in the last couple of turns, or find and bring down a couple more critters. That wasn't going to be easy when a lot of the party are armed with clubs and axes, though. 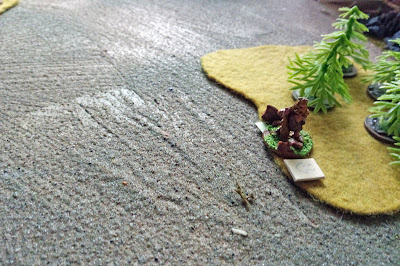 Frun continued to explore - and discovered that a terro-bird had crept up onto the hill, drawn by the various sritters the party had killed. This was a bit of a problem. Firstly the hunters can't win if they lose a single member of the party. Secondly, left unchecked teh predator would eat their critter kills, and the group were still not quite at the target with only two turns to go. 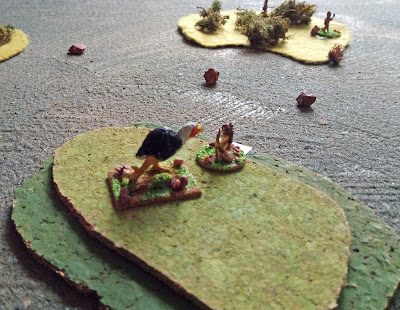 Frun backed away carefully as the giant bird eyed him. he then put an arrow in it, wounding the beast. Against the odds it was so surprised it backed away behind the hill. Frun was too cautious a hunter to be fooled and used his last action to drop into ambush. 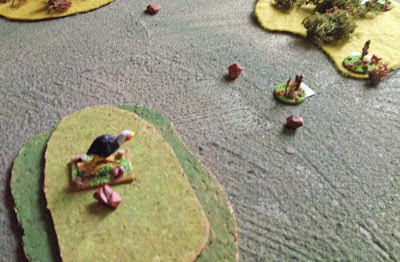 Behind Frun, Brell was still searching for huts and berries, and making a lot of noise. This attracted the terror-bird back onto the hill. But it was also within the range of Frun's bow. With an ambush he needed a 6 to hit ... and got it! The terror-bird was killed, and it's bulk was enough to take the hunters to their target for the day. 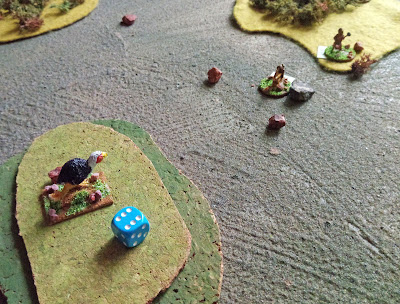 The hunters needed 10.5 bulk, and got 12. Two of them ended up sick from eating the wrong type of fungus. 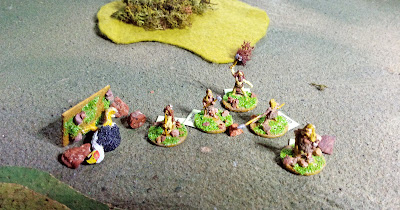 So another successful hunt.

Vikk was deemed best hunter without a trait (to be honest it was 50/50 between him and Grub), and acquired the Alert trait. Ron and Brell suffered long-term effects from their poisoning. Ron lost his Bigfoot trait, whilst Brell will count as Lame in the next game.

The party is now:

And winter is now upon us; the tribe must make one last hunt before the food supply dries up.

(Apologies for the really terrible pictures. Our power was off today, so we had no lights. And I played the game during a storm, so the room was really dark. Could have used the flash, but I didn't want to run down my battery any more than necessary.)
Posted by Kaptain Kobold at 16:20