Dragon Rampant At The Library

Once a year Wollongong Library holds a games day as part of International Board Games Week. We went last year (see the archive, because I'm too lazy to link it), so made the effort to turn up again this year as well. As I documented in a post the other day I thought I'd take along a miniatures game in order to 'fly the flag' and chose a miniaturised Dragon Rampant. See that blue bag on the table? Everything we needed fitted into there. 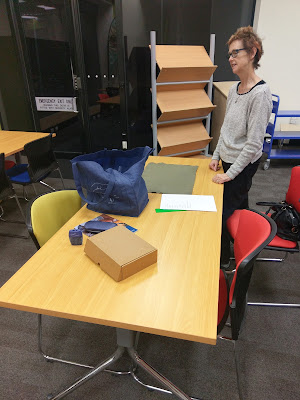 The lady on the right is the librarian responsible. The library even has a monthly board games group (Wollongong Library, first Monday of the month, 6pm - 8:30pm). Part of their games library can be seen on the trolley behind her. 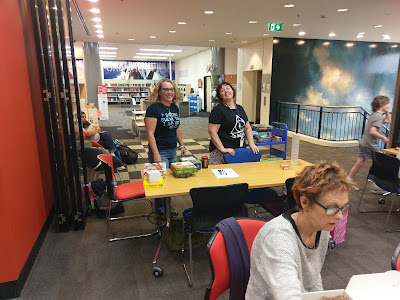 The plan was for Catherine and I to play a game, and let other people take over if they were interested. As it was we just played two games, but plenty of people came up to watch and ask questions.

For the first game Catherine took the Spectral Host, and I took the Temples of Syrinx. We chose our forces, generated leaders and then randomly selected a scenario. The terrain was randomised as well.

And the scenario? The Ringbearer. One of Catherine's units has an item of great magical power, and I had to find the unit and destroy it, without leaving it as her last surviving unit. If it was her last survivor then the artefact would explode and wed all lose. 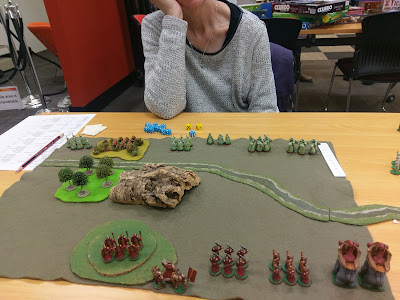 I pushed forward strongly against her left. The Gronks (my cavalry) took the lead. 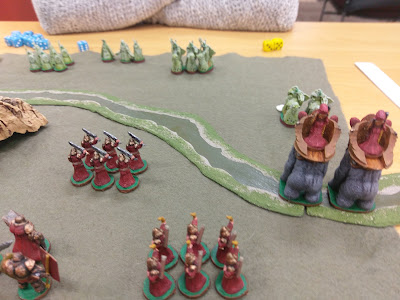 Catherine's Spectral Knights got stuck in 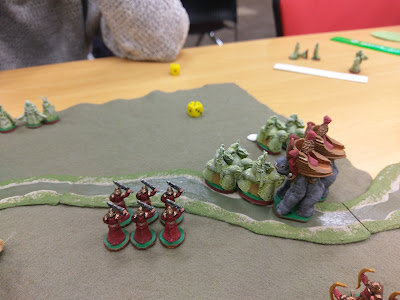 The Gronks were pushed back and broke. 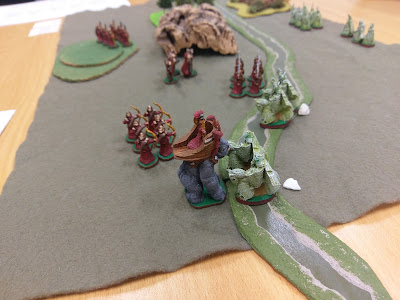 My swordsmen crossed the stream, and the rest of my force failed to support them. 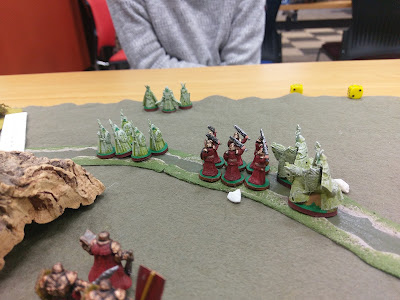 They were attacked, surrounded and destroyed. 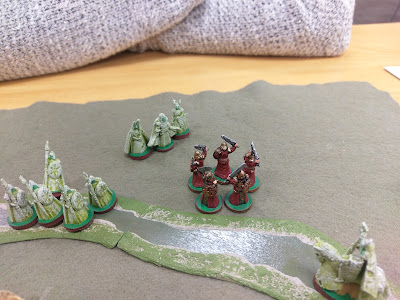 The Syrinx archers finished off the Spectral Knights, and my Knight Commander dealt with the undead spearmen. This just left Catherine with her leader on that side of the table. 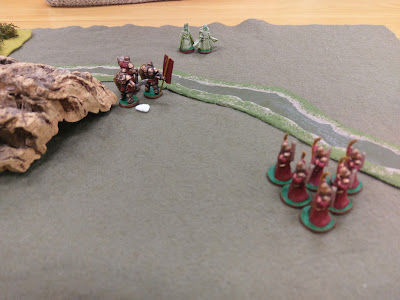 On the other side I was covering the flank with some spearmen. In a shieldwall. On a hill. A good defensive posture. She attacked with some spectral soldiers and (just hidden behind the woods) some giant rats. 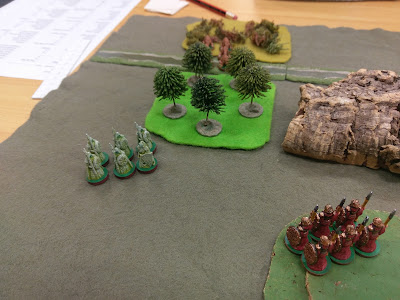 Being impetuous the rats couldn't help themselves, and charged in. More than once. 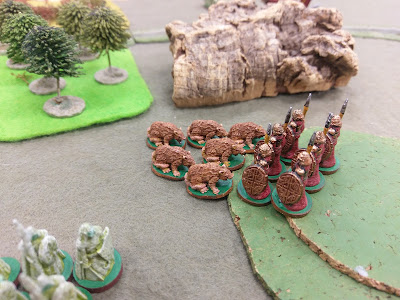 Catherine's Wraithlord was confronted and destroyed. He wasn't the ringbearer, as I'd anticipated. 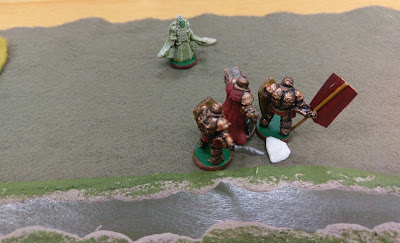 The ringbearer had to be either the rats or the spectral soldiers. It was fifty-fifty. Destroy the wrong unit and the game would end. 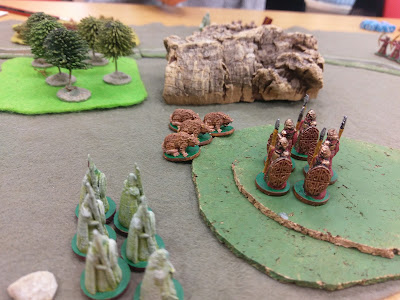 I destroyed the spectral soldiers. The ringbearer was the last rat. BOOM!

This meant that we both lost any points for destroying enemy units. However we did keep points for quests, and I'd completed one of mine by destroying her general. So I won. 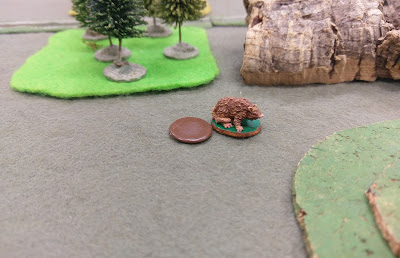 After coffee and a cake we set up a second game. In this one we had to recover crystal fragments scattered across he board. 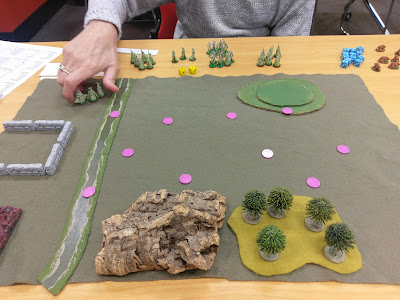 Catherine took the Spectral Host again. We both took slightly different forces; she opted for bellicose foot instead of the cavalry, as well as some banshees, whilst I dropped the archers in favour of beefing up a couple of units with magic armour and some blessed weapons. 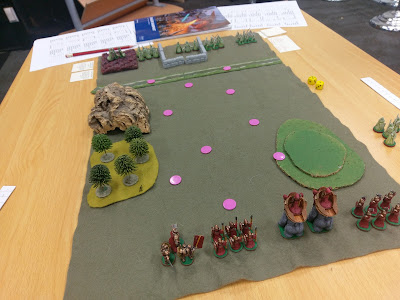 We both pushed forward quickly, grabbing crystals as we went. 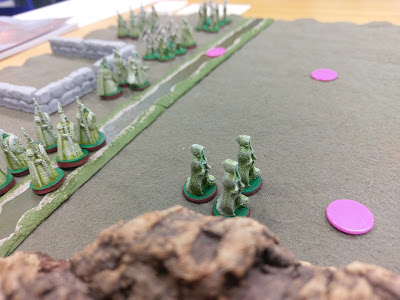 Once again the Gronks formed my vanguard. 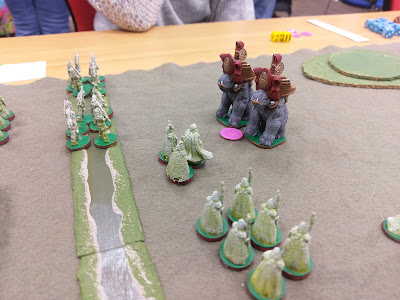 Fear-inducing warriors charged them. They failed to countercharge. They broke and ran. 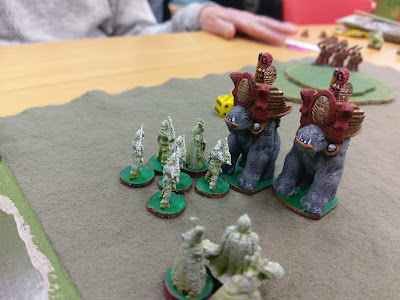 The banshees skirmished ahead of Catherine's main force. 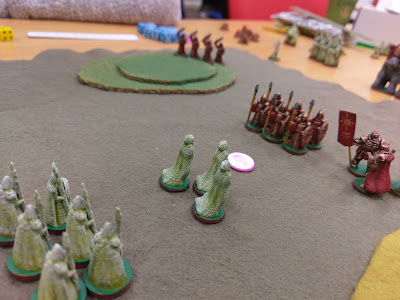 By this stage we had collected all of the crystals; I had managed to pick up six to Catherine's four. But the game could be won or lost on the points from quests, so fierce fighting was inevitable. 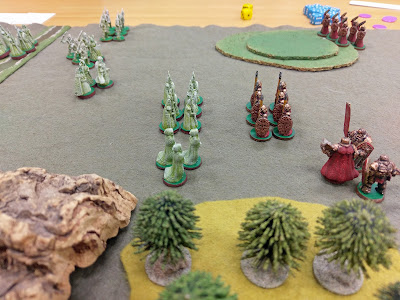 I formed a wall of spears in the centre. 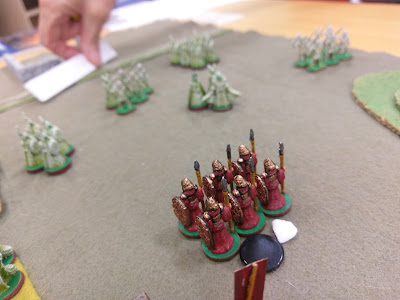 Meanwhile my Knight Commander attempted to flush out the banshees from the cover of some woods. 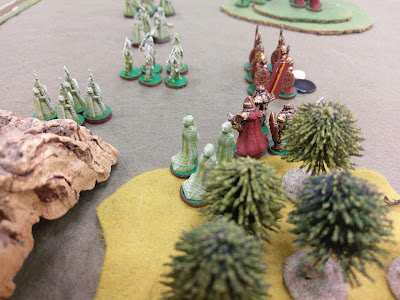 Over on the other flank some wild spectral warriors clashed with my swordsmen. This band of ghosts was the target of one of my quests, so I was happy to get stuck in and lose the swordsmen in order to destroy them. Both of these things happened. 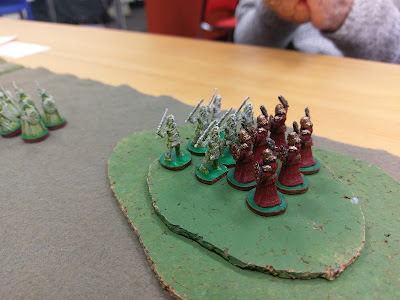 In the centre my wall of spears held firm. For now. 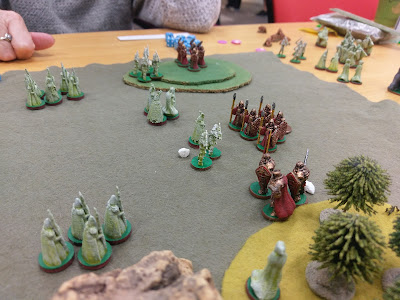 The Knight Commander finished off the other unit of bellicose foot. 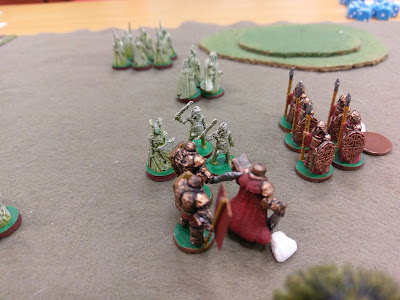 But Catherine's Wraithlord broke the wall of spears. 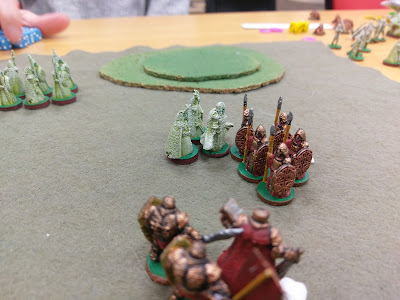 This left my commander all alone. 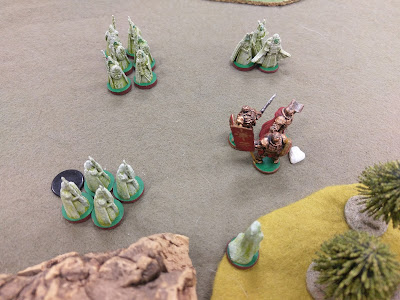 He took one casualty from the surviving banshees, before charging to a glorious death on the spearpoints of some spectral warriors; destroying that unit would have completed my second quest and, at this stage, I'd won the game on points anyway. 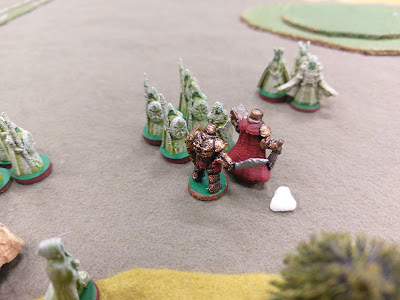 So I was wiped out, whilst Catherine still had four of her six units in play. And yet I won because I'd collected more crystals and achieved more in the way of quests. That's Dragon Rampant for you.

People enjoyed seeing the game in play, and miniature gaming out and about. One point of interest was that the rather cut-down, basic look of the setup was, according to a couple of people, 'less intimidating' than many miniatures demos. At an event that is about games, the look can sometimes take second place to the fact that a game is being played which is within the scope of the casually interested. It made the hobby seem more accessible.

Be that as it may, Catherine and I had a fun couple of games, met some new people and, to top it all off, I completed another category in my Six by Six Challenge.