Me? The Kaptain of Kobolds? Playing a scenario set during the Battle of Waterloo? With my reputation? What were they thinking?

But play I did. Despite my relative indifference to what I know to a few wargamers is an important anniversary in a few weeks I played, and enjoyed, this Black Powder game which Ralph put on for us this evening, using figures and scenery which will be deployed for the truly enormous refight of the whole battle in a few weeks time.

In the middle was a farm, which looked just like that Airfix one I used to have many years ago. It had a garrison of troops which may or may not have been British, but who were certainly not either French, nor friendly to the French. Next to it was Sharpe, or at least some of his known associates, in a sandpit.

Here we can see loadsaFrench. 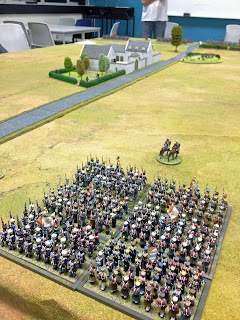 The British looked a bit thin on the ground. There was some cavalry off-table. Guess who had command of the cavalry. Yes - me! 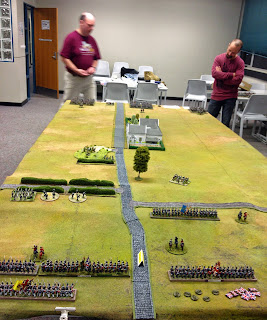 To confuse the French the road-signs had been written in English. 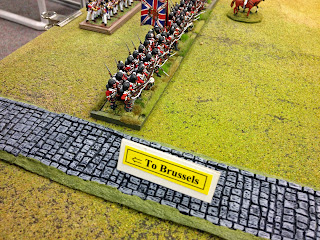 Ah, the peace of the Belgian countryside. 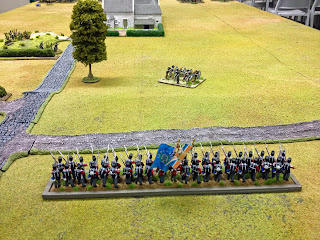 The British cavalry arrive, with one of the four units coming from the civilised part of the country, and the rest from the barbarian fringes. 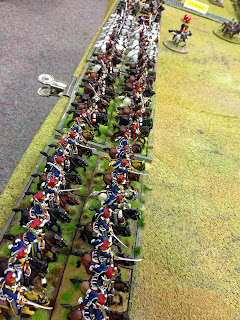 At the other end of the table the French began to mass around La Haye Sainte. The defenders look thin on the ground, but more were implied - the farm was fairly well defended, even if the defenders were not all depicted. 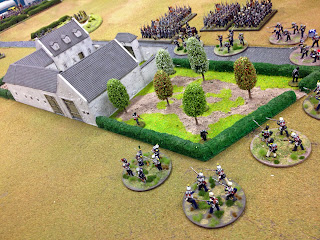 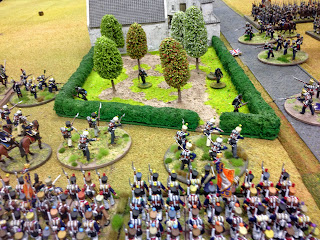 The thin red line formed up on a sunken lane on our left flank. 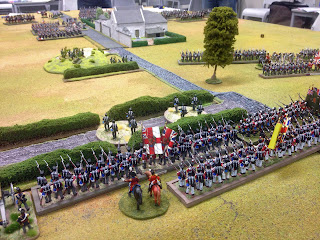 Sharpe in the sandpit. 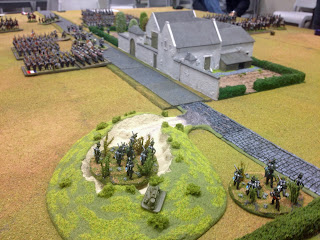 On our other flank Peter went for an advanced defence, hoping to provoke the French cavalry into a charge by shooting at them a lot. Caesar ordered a charge - an order to which only one unit responded with that unit falling short. 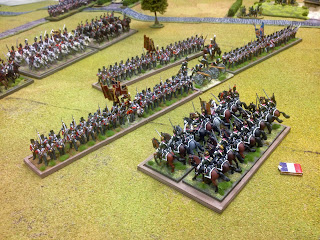 Unfortunately a French light cavalry unit swept past the farm on the other side, crossed the Brussels road and swung into the left flank of Peter's infantry. The Kings German Legion got hit hard, and routed, along with one of the supporting Foot Guards units. In one turn Peter had lost two-thirds of his infantry 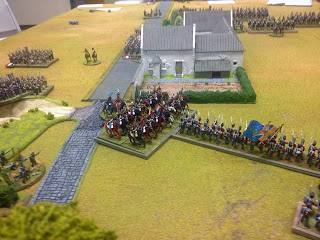 A breakthrough charge saw our guns lost as well. 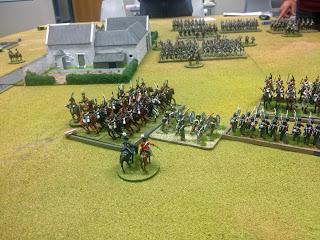 The French commander pointed and laughed at his British counterpart. 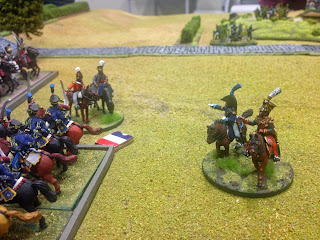 Time to save the day! In go the Scots Greys. 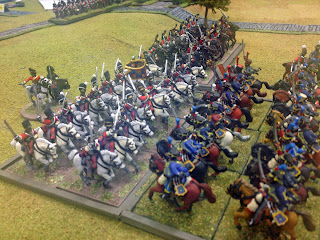 Charge brought to you in glorious Multi-Angle Vision! 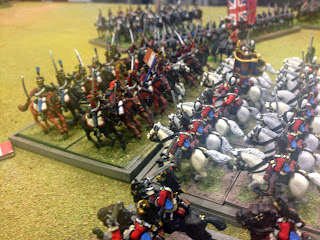 Even from the back. Top that, Lady Butler! 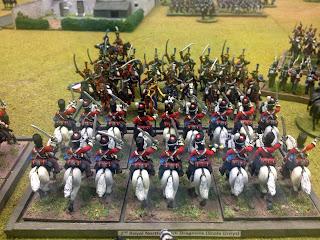 Actually as cavalry charges go it was pretty pedestrian. Despite all our advantages we pretty much fought to a draw, and both sides withdrew to lick their wounds.

It was at this point that I discovered that our part of Wellington's army was being led by a young Abraham Lincoln (who was, in fact, six years old when Waterloo was fought, as was, incidentally, Charles Darwin, who was born on exactly the same day in 1809). Well, either it was Abraham Lincoln ... or The Penguin. Top hat and umbrella; it's a dead giveaway. 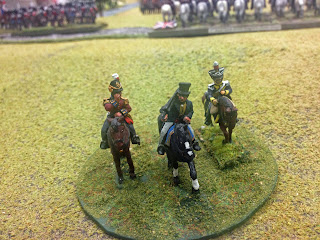 My cavalry got stuck into the French cavalry, and we all had a jolly good time, even if it was all a bit inconclusive. 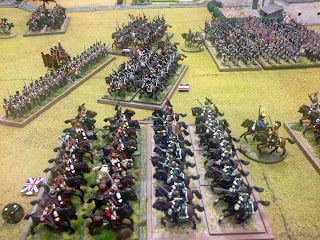 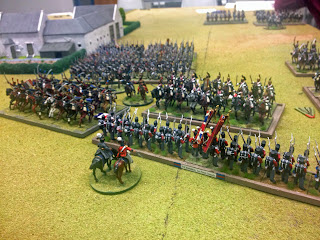 Aiming to make things more decisive The Penguin ordered the Scots Greys to forgo their Irn Bru and shortbread break, and to move up in support of the Dragoon Guards who were, we discovered, very handy in a fight. So handy, in fact, that they made two lots of French cavalry run away. 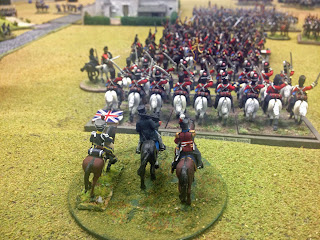 On the left Sharpe had a play-date in the sandpit with lots of Frenchmen, who decided that they'd probably like to go home now, if that was OK? Other Frenchmen had tried to join a wine-tasting event at the farm, but apparently the defenders were German and had pre-booked all of the seats very early that morning, thus denying Napoleon's troops a chance of getting in. Killing a few of them reinforced the point. So those French went home as well. 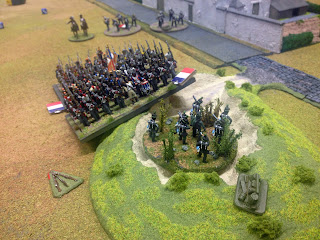 Cavalry having a jolly time. 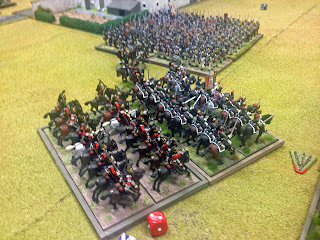 So jolly, in fact, that the French ones decided to go home and tell their friends all about it. Bye-bye. 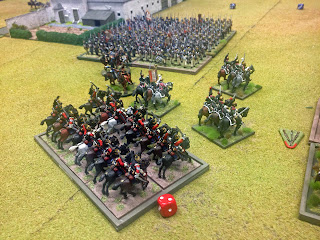 Unfortunately whilst a load of French cavalry had run off, ours was getting a bit tired, and a tea-break was definitely being suggested. Sadly this would leave one unit of British Guards between an enormous blob of Frenchmen and a mid-June city-break in Brussels. Obviously this wasn't the kind of thing we were willing to put up with, but what were we to do? Run out of time, that's what. 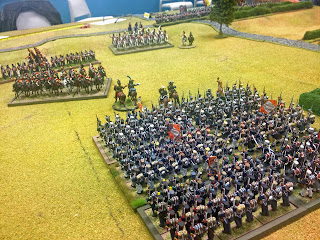 So there the game ended. Caesar still had some stuff to throw at the wobbly British right, although Bryan was looking strong on our left and had troops to spare to bring up in support. There was probably an interesting game still to be played, although my contribution would mostly be based around rallying cavalry.

Thanks to Ralph for organising the scenario and the figures, and to Bryan for remembering how to play. It sounds like the game was a useful exercise in advance of the main event, and we got to push big piles of figures around. A win for everyone!