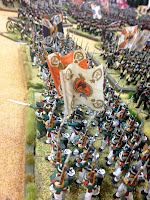 Last night we played a game inspired by, and in commemoration of, the 200th anniversary of the Battle of Dennewitz, in which a French army was defeated by a Russian/Prussian/Swedish Coalition.

We used 'Black Powder', and a vast array of 28mm figures, mostly provided by Ralph, but with Bryan and Austin chipping in as well.

The situation had both armies advancing along a fairly open road, with a brigade arriving each turn. The battle would develop as the two armies bumped into each other. I was one of the French players, and we were hampered by two things; firstly we didn't read the scenario objectives and, secondly, we didn't read the OOBs and realise that we were outnumbered ...

When I arrived I was greeted by Russians and Prussians already advancing up the table. At the other end Caesar was deploying some of our infantry. 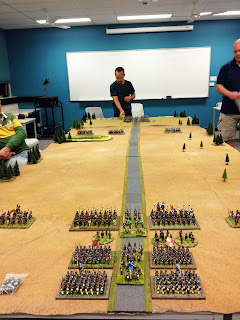 The view from the French end of the table. In the distance can be seen my command. Cavalry. Oh yes!

(In fact you'll notice that this report is written very much from the perspective of the French cavalry.) 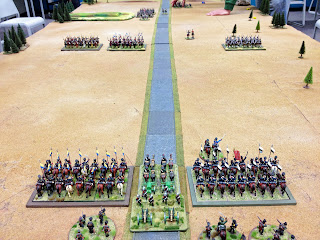 For once my rather aggressive style of cavalry command, admired and respected by the glue and pet-food factories of Europe, paid off, as attacking the Coalition troops before they could properly formed up was deemed a Good Plan. So I attacked. 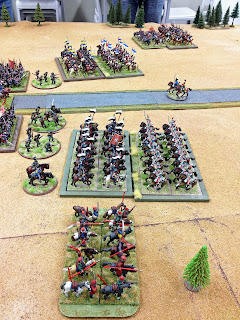 I think these were some Guard light cavalry. They had pretty uniforms, but couldn't fight to save their lives, and immediately routed. 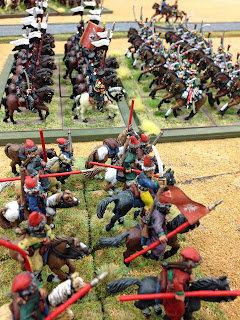 My other units did better, with my lancers driving back their coalition opposite numbers ... 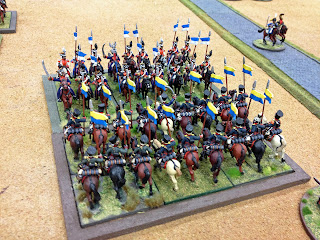 ... and hussars easily routing some Cossacks. 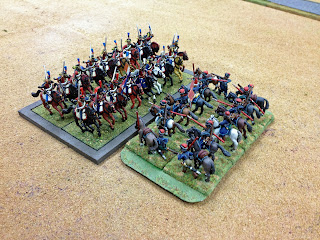 The lancers drove their opponents right into the Coalition formation, threatening the flanks of the arriving infantry. 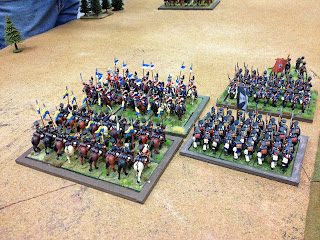 I wasn't to be tempted, though, and with the enemy light cavalry neutralised on one flank at least, and the Coalition advance slowed, I retired to allow the infantry to come up in support. 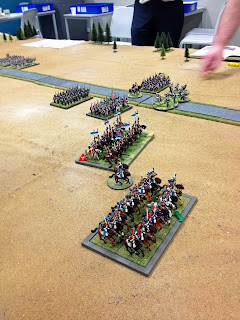 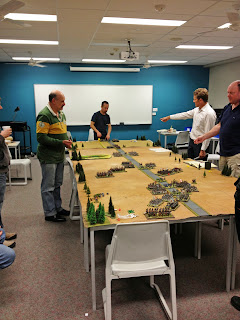 As our infantry formed up at the other end of the table, my second command arrived - the heavy cavalry. Unfortunately it wasn't that enthusiastic, and plodded slowly up the table. 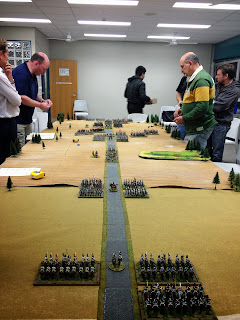 As a massive wall of Russians and Prussians formed up, Ralph explained that perhaps we should have read the scenario. The victory conditions were such that we only had to inflict a certain casualty level on them, not defeat the whole army (which was twice the size of ours). 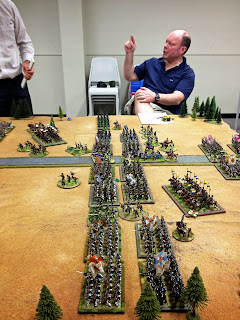 It really was a solid wall, though. Our infantry commanders decided to concentrate on their right, whilst my cavalry screened the left flank and looked for openings. 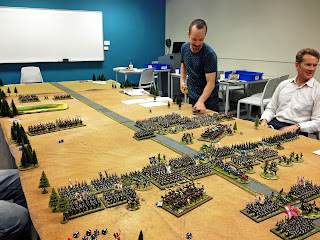 Ralph resorted to directing traffic as the masses of Coalition troops, trapped in a small space as the result of my initial attack, had trouble forming up. 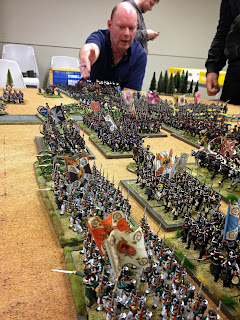 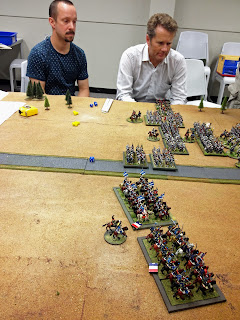 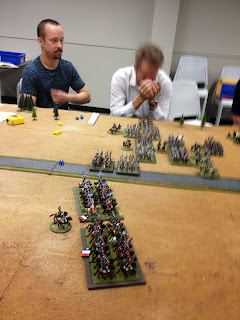 It was suggested that I push my rallying light cavalry into a more forward position to threaten the Coalition guns. A turn later, this is what remained of my light cavalry ... 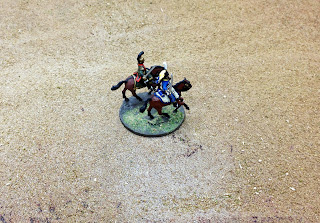 Undeterred the brigade commander attached himself to a heavy cavalry unit, and attacked the guns. Somehow (owing to a house-rule of some kind) the guns held the charge. No, I don't understand it either. 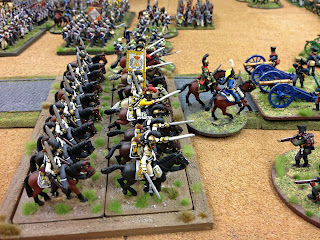 With nothing to lose, and the clock ticking towards the end of the game, the French attacked. 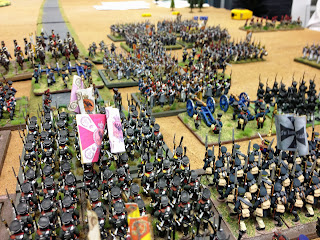 Even the heavy cavalry finally got stuck in. 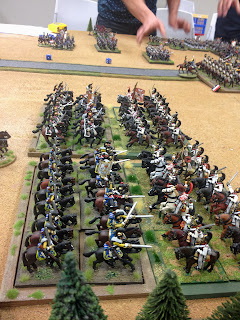 At the end of the game the casualties were much more even, and although the Coalition had won on points we weren't whitewashed. My heavy cavalry looked set to pretty much even the score for us; if only it been a little quicker in coming up we might have won the day after all.

Thanks to Ralph for organising the scenario (even if some of us didn't read it) and providing the lion's share of the figures.
Posted by Kaptain Kobold at 08:49