The Battle of Mill Springs

Mill Springs (or Logans Crossroads) was a battle fought in Kentucky on 19th January 1862. It was the first significant Union victory of the American Civil War, and saw the end of a Confederate advance into the state.

The Confederates had pushed forward during the night, two brigades strong, to attack the encamped Union forces, three brigades in strength. It was a cold, wet night, and many of the Confederate troops had poor or old weapons which suffered badly in the damp.

Around 6:15am the lead elements of the Confederate advance met the Union cavalry pickets.

I fancied trying an actual battle using the Neil Thomas rules from 'Wargaming: And Introduction'. Mill Springs looked interesting enough to try, with enough troops for a good game, but the armies arriving piecemeal so that there wouldn't be too many troops to handle. I used a scenario by George Anderson and Ryan Toews as the basis for my much-simplified map and the orders of battle.

I added in simple rules for Leaders. Both sides had one Leader apiece. He could be used to modify certain die rolls: +1 on any morale roll, rally roll or test to charge, or a reroll of any one dice when firing or in close combat. However each time he was used another die was rolled, and on a '1' he was lost. A Leader could be recovered or replaced only at the end of the side's Rally Phase, and then only on a roll of 5 or 6.

For the scenario I included two rules. The first was that field boundaries were fences, and a unit in cover behind one got a save of 6 only vs firing or close combat. The second was that most Confederate infantry units only hit on a 4 or more, to simulate their poor weapons.

This was the opening setup, with Union cavalry dismounted behind a fence, and a Confederate cavalry unit advancing on them. 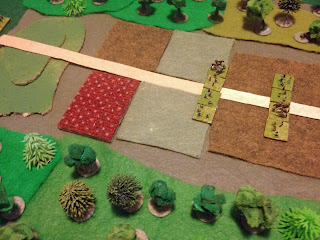 A firefight ensued, with the Confederates getting the worse of the exchange. 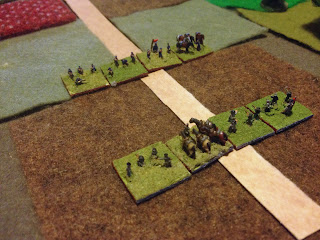 Confederate reinforcements, in the form of Zolicoffer's brigade, soon arrived though. 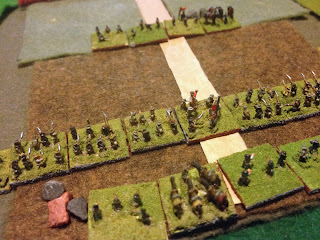 The Union cavalry was driven back. 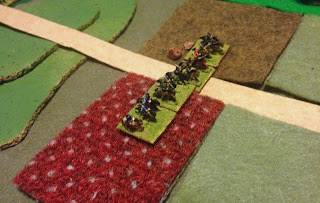 And the Confederates continued to arrive. At this point I realised that Id probably made the playing area just a little too tight, as a serious traffic jam began to form. 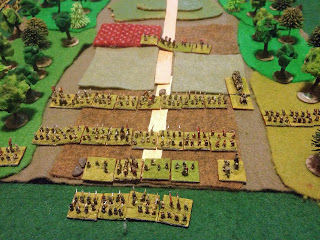 The first Union units were moving from their camps to the sounds of gunfire. 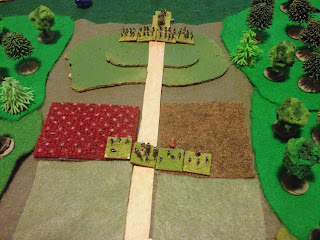 The Confederates pushed hard against the Union cavalry, who had rallied and reformed behind another line of fences. 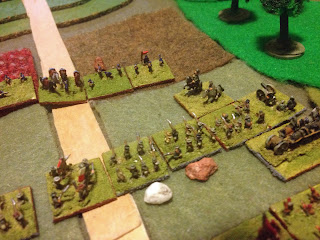 The Union reinforcements continued to arrive 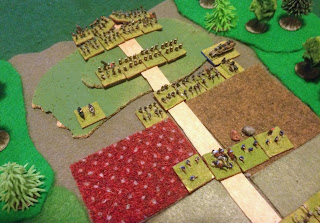 The playing area was really quite busy now. 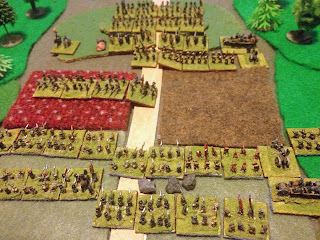 The Confederates advanced through the woods on both flanks. 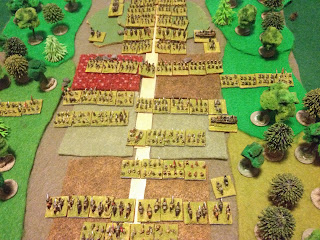 By now the Union troops were suffering from the traffic jam problem as well. 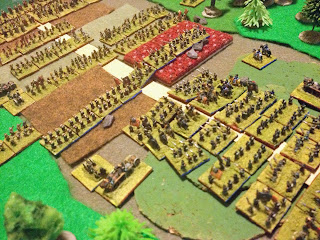 The Confederates outflanked the Union left. 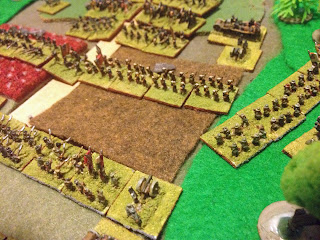 A charge saw them sweep away a battery of artillery. 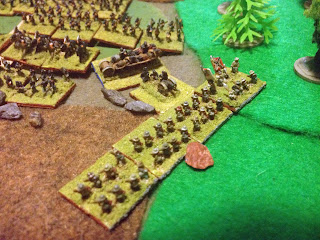 The centre became a stalemate, as units exchanged fire, failed morale tests and retreated behind supports who continued the action. The retired units then rallied off any hits and were ready to get stuck back in once the new front line fell back. 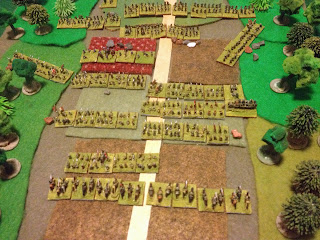 And that's how it played out until the end of the battle. The Confederates had created a possible opening on the Union left ... 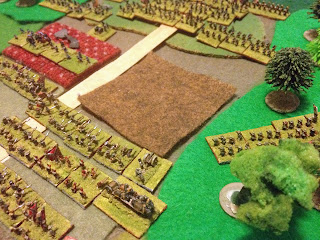 ... but lost their leader doing it. 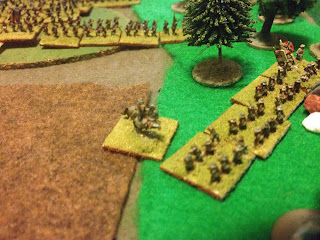 On the Union right the original cavalry unit was back in action, all hits recovered and good as new. 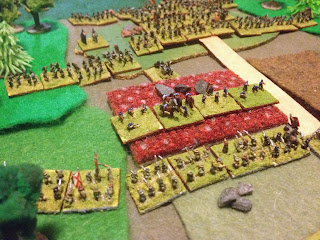 The Confederates had significant amounts of cavalry in reserve. 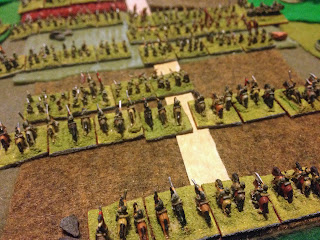 On the whole it was a disappointing game, mostly due to the fact that I made the playing area too narrow. This meant that neither side could really bring any superior firepower to bear, and therefore units never took enough damage to be in any real danger. Once they fell back it was relatively easy for them to rally off the damage behind multiple lines of friends. I don't think the rules are necessarily flawed in that respect (although I'd be tempted to say that the first base lost can never be rallied back, so there is some form of attrition), but that my scenario design didn't really play to how the rules work. Maybe I will try some more basic games to get a better feel for them. But it was a useful exercise for all that, and the masses of troops looked good in the small space.