Last night Ralph put on his Vitoria 200 game, delayed from a month ago (which would have been the actual 200th anniversary). I have to say that it's not a battle, or indeed a conflict, with which I'm very familiar, so I will probably let Ralph fill you in on the details when he gets around to writing it up on his own blog. I shall just post pictures and my usual commentary.

We used Black Powder, and Ralph's collection of pretty 28mm figures. Bryan and I had an Anglo-Portuguese force consisting of three infantry brigades and one cavalry brigade. We were tasked with forcing a river crossing in order to cut off the retreating French army. Some French that were not retreating would oppose us.

We devised a plan, and Bryan, who doesn't know about these things, let me have the cavalry.

Here are our troops. 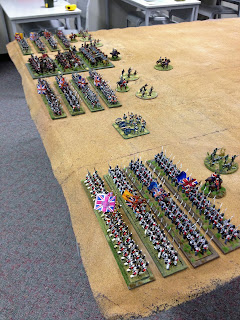 There are no French visible yet, as Caesar and Dave hadn't decided where they wanted to put them. The town was our first objective, then the bridge beyond it. We had eight moves in which to take them 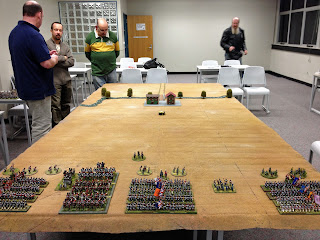 Some French start to appear. 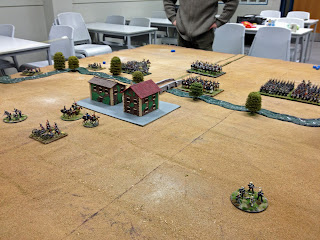 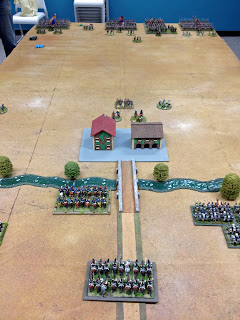 I had an infantry brigade which included a Portuguese regiment; you can see it here, at the back. Along with the cavalry I was tasked with covering our left flank and keeping the French busy, whilst Bryan's two infantry brigades did the hard work of assaulting the town. My infantry was to move across and help if the French didn't tie us down too much. 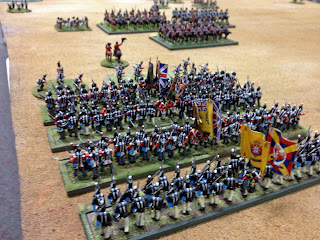 The cavalry advanced in fine style. They always do when I command them. Then they die like flies. 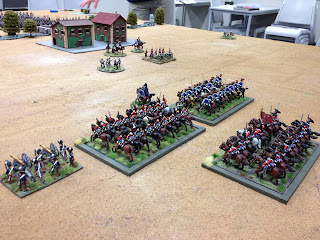 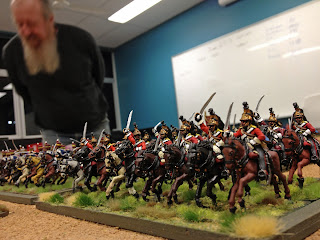 The section of river I was facing was the only bit that was fordable, so the French pushed across in force. Seeing disordered infantry in columns in front of them, the British cavalry charged. 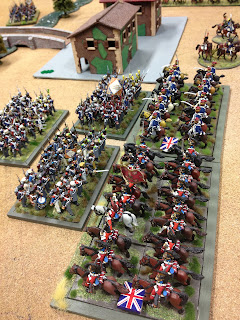 The French formed square, and the cavalry retreated. Sadly the dashing hussars got so shot up by artillery on the way out that they kept running until they reached Lisbon. 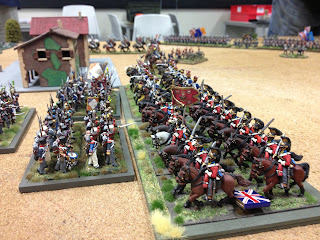 Our infantry formed up in lines. Well, they are British. 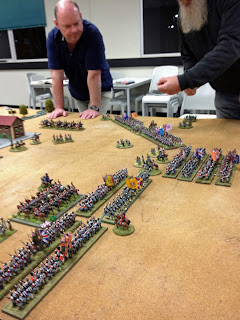 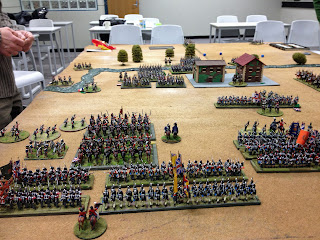 Ralph took some pictures for his 'private collection' :) 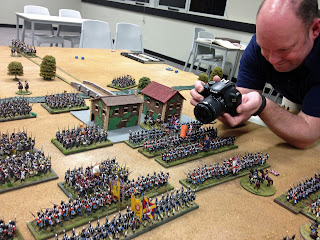 A gap in the photos - my lead British infantry regiments got slaughtered and their demise wasn't documented. One was charged by a French column, and just ran whilst the other - a Scottish regiment - stood disordered under artillery fire until eventually the survivors just wandered off to drink whisky and play cards.

The French then attacked the Portuguese regiment. 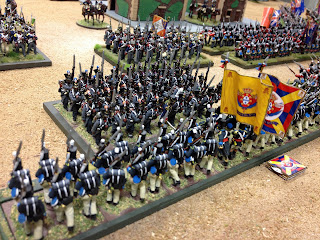 Over the course of the next few turns, the Portuguese fought off - as in routed - two French regiments, caused a supporting regiment to rout and caused another infantry regiment to retreat from the battle with a single volley of musketry.

In fact that single Portuguese regiment caused more French casualties than the rest of the British army put together, and stopped the French dead on our left flank. 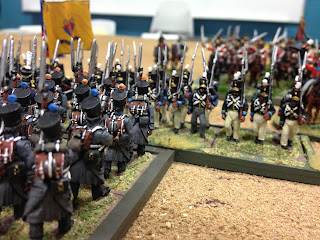 The final position. Bryan's troops had just taken the town, and were pushing on to the bridge. 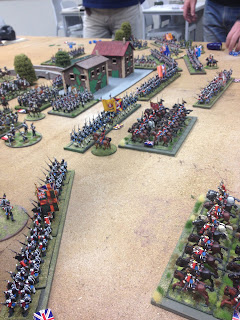 The first British regiment crosses the bridge into the French rear. 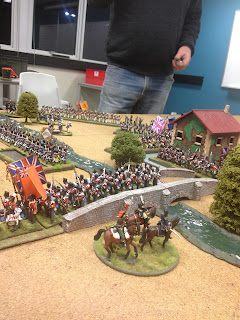 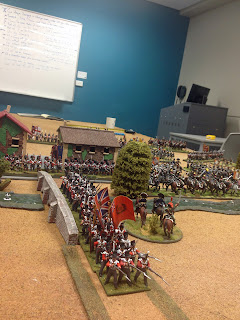 We took the town, but only at the last minute and at great cost. The French had really held us off fairly well, so the game was declared a draw. Had we been a turn earlier in achieving our objective the French position would have been sufficiently compromised for us to have claimed some kind of victory. 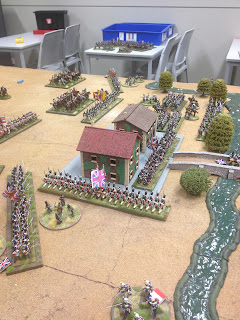 Of course, the Portuguese have won undying fame. They took one hit in the entire battle. Medals all round, I say.

And I only lost one cavalry unit.

Beethoven wrote a piece of music about the battle. Here it is.

Thanks to Ralph for putting on a gorgeous spectacle. I have one or two minor issues with the rules but, as I think the authors intended, they are really just a set of suggestions and are open to tinkering.. I may need to tinker when I run some games of my own.