The title says it all. I've been playing some more OHW scenarios with Simplicity in Hexes, partially to try out some changes to the rules. Most of these relate to the idea that a move adjacent to an enemy unit is counted as a charge, and the fact that this creates a number of strange situations and odd 'gamey' blocking possibilities that I don't think were intended. I am now playing with the idea that any unit can move adjacent to an enemy, but only units permitted to charge can then initiate one. Other units can shoot if and when eligible. And no unit can voluntarily move out of a hex adjacent to an enemy, but they can pivot. This creates a pinning effect which can only be broken by the retreat of one of the units through close combat, or the destruction of one of the units by either close combat or shooting.

Anyway, I played a couple of scenarios on Monday evening, but had left my phone at work and my camera on charge, so there are no pictures. I didn't encounter any issues with the rules or changes however. Last night I played through OHW Scenario 1, the basic Pitched Battle. Again I used Bolivar's Patriots against the Royalists. The Royalists are in the foreground, with three line infantry, two cavalry and some artillery. The Patriots in the background had four line and two cavalry. 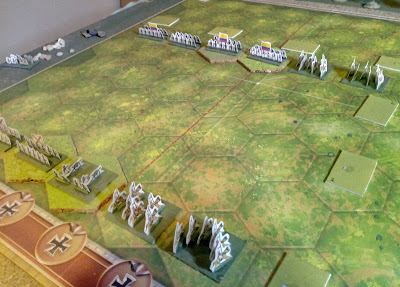 The battle started with the opposing cavalry fighting for supremacy on one of the flanks. The Patriots got the better of the action, driving back their Royalist counterparts. 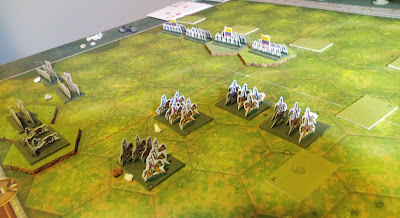 As the cavalry fought, the Patriot infantry advanced. With victorious cavalry on the enemy flank, a volley of musketry was needed to weaken the main Royalist line and allow a final mounted charge that would allow Bolivar's troops to sweep to victory. 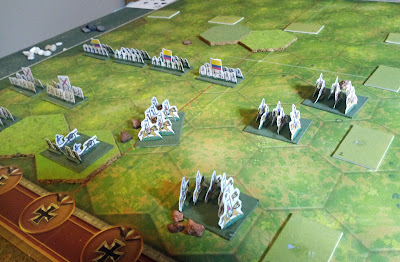 The Royalist cavalry formed up for one last counter-attack, but were finally defeated. They'd left their mark on the Patriot horse, however, who were obliged to hold back away from the Royalist artillery. 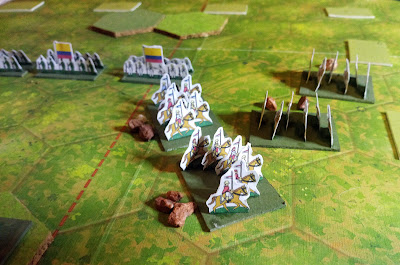 The infantry on each side now engaged. Initially the superior Patriot numbers told, but some terrible shooting rolls soon saw this advantage thrown away. 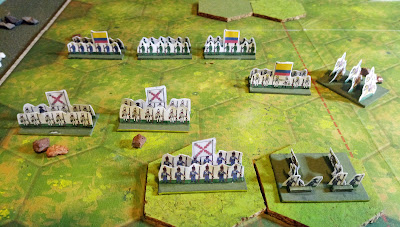 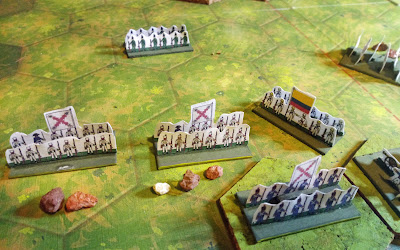 It was supported by a cavalry charge on the Royalist artillery. 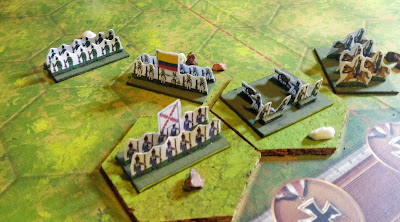 The Royalists turned their guns but to no avail. A second desperate charge saw them eliminated. 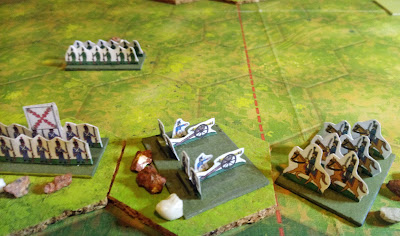 However the Royalist infantry were shooting well and, despite the hits they had taken, very much had the upper hand. Eventually only the Patriot horse was left. A final charge destroyed one Royalist unit, but the other fired a volley that saw the cavalry rout. The battle was a Royalist win in 10 turns. 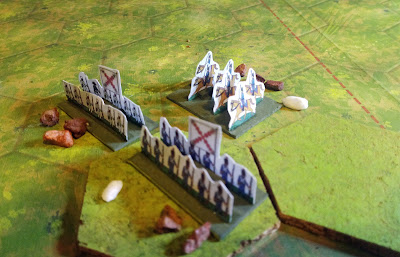 The changes to the charge rules seemed to work OK, although I'd like to try them out a bit more with some light infantry/skirmishers as well.

I made two other modifications as well:

(i) A unit hit in the flank that is required to retreat will first pivot by the minimum necessary to put the attacking unit to its front (it will turn to face, in other words). It then retreats.