The Battle Of San Lorenzo 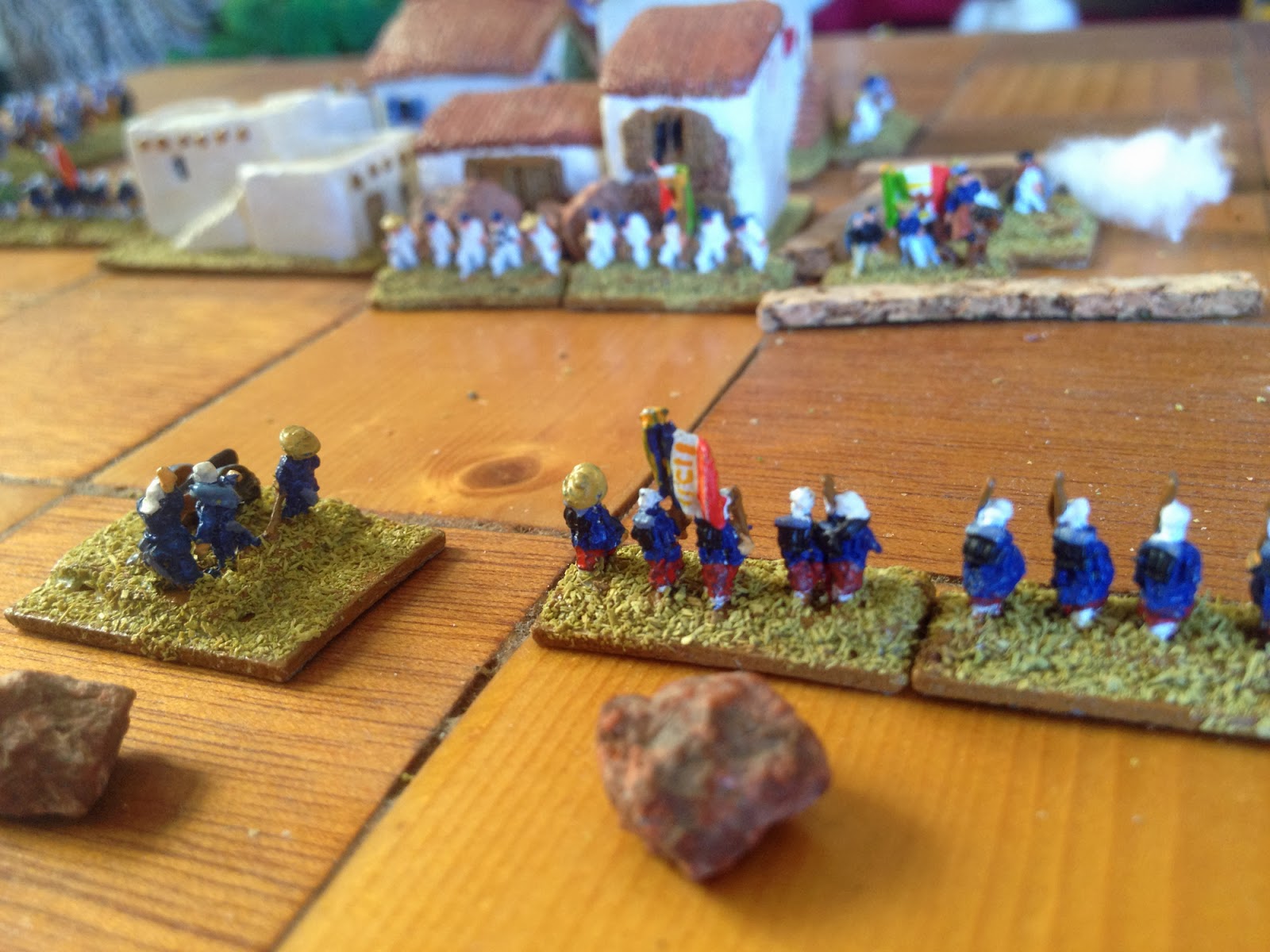 The Battle of San Lorenzo was fought in Mexico on May 8th 1863. A Mexican column, marching to the relief of the besieged city of Puebla, was attacked by the French whilst encamped in the village of San Lorenzo.

I played this game this afternoon, basing it around the scenario given in Tim Tilson's 'Colonial Campaigns: Maximillian In Mexico' and, once again, using my 'Battle Cry' variant.

The rules were as described in previous posts, with one addition. If attacking at a range of one square, an infantry unit can, and a cavalry unit must, declare a charge. If their opponent retreats or is destroyed, then the unit may move to occupy the vacated square. However if there is still an opposing infantry or artillery unit in the square, it rolls one combat dice back against the attacking unit.

(For ACW games I would make cavalry charges optional, and allow cavalry the one dice retaliation as well, to reflect their greater use of guns.)

The forces were as follows:

Here's the set-up. The terrain was minimal - a square of four buildings, a churchyard, which provided cover but which didn't block line of sight, and a church (another building). 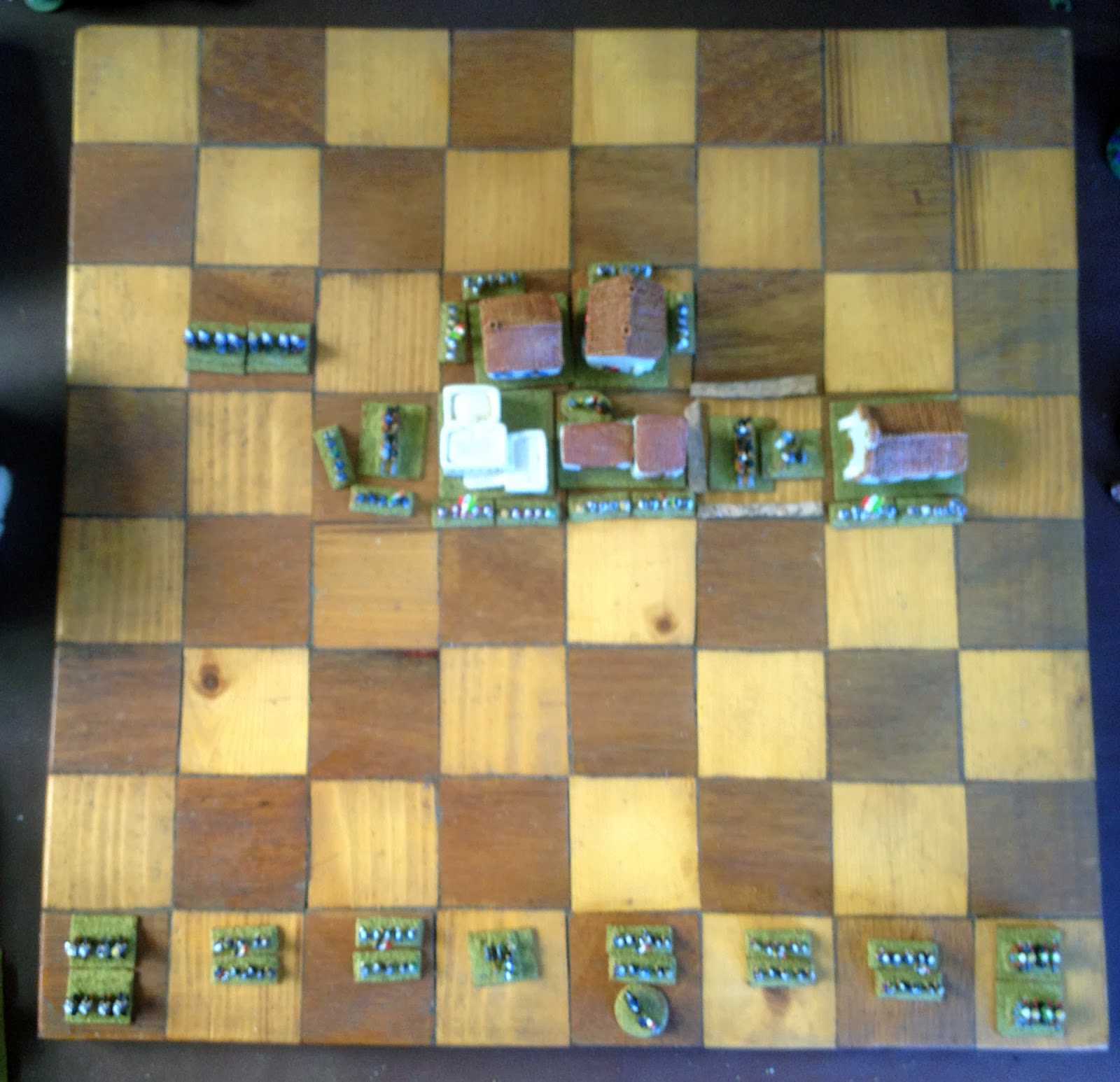 The Republicans set up in and around the buildings. The French deployed on their own baseline.

There were two special rules. Firstly the Republican wagons were special units. They could occupy the same square as a friendly unit, but had to be activated in order to move (they moved one square and could not fight). Wagons could be activated as if they were artillery They could not be shot at or engaged in close combat, but control of them passed to whoever last occupied the square they were in. The Republicans scored one flag for each wagon they could exit off their baseline. The French scored one flag for each wagon they controlled.

In addition, the Republicans are assumed to be surprised at the start of this battle. They only get one activation dice each turn, until they roll a six on one of their dice. This allows them to use two dice on their next turn; if one of those scores a six then they get their full three dice on subsequent turns. Note that this may seem harsh, but a roll of five on that one dice translates to an extra dice and a reroll, increasing the chance of scoring that vital six, so the odds aren't too bad.

I didn't photograph every move of the game, preferring to play instead. The French pushed forward quickly, whilst the Republicans slowly reacted, starting to move the vital wagons out of reach. Here are the French pushing forward in the centre. They also rapidly moved their cavalry around the flanks to try and cut off the wagons. 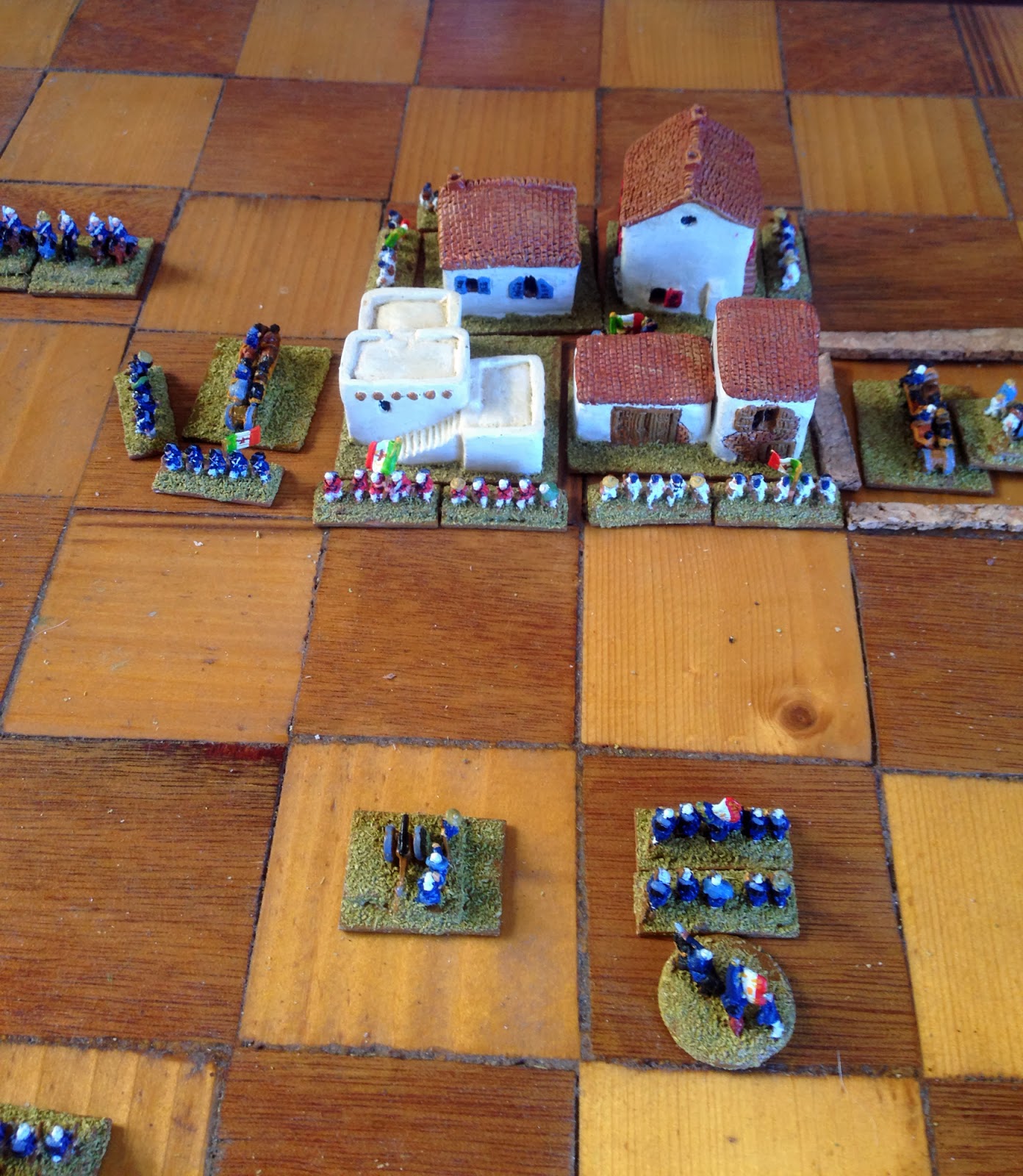 The French woke up the Republicans with a volley of musketry. 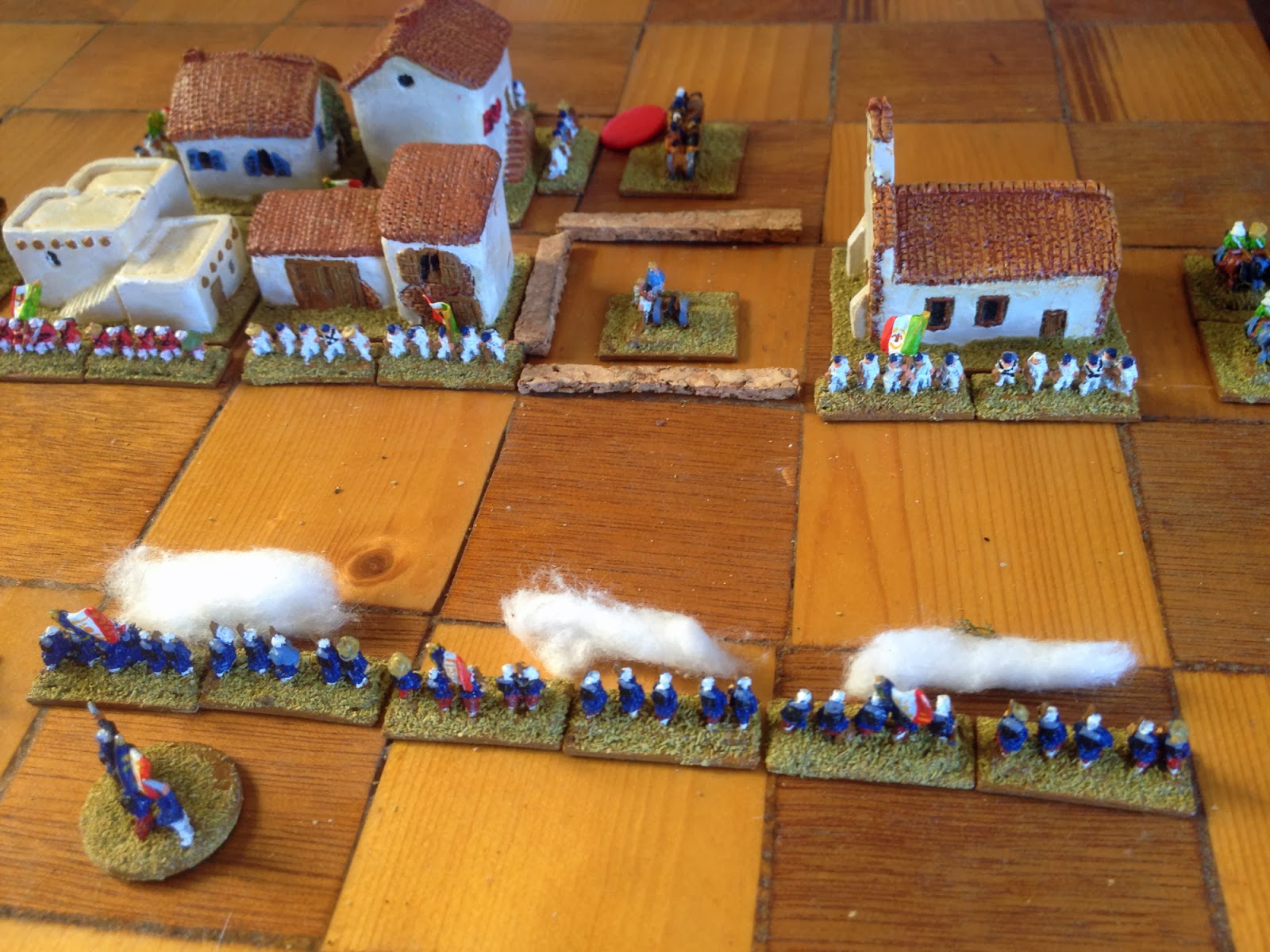 As the French infantry pressed home their attack, their cavalry tried to outflank the Mexican position. 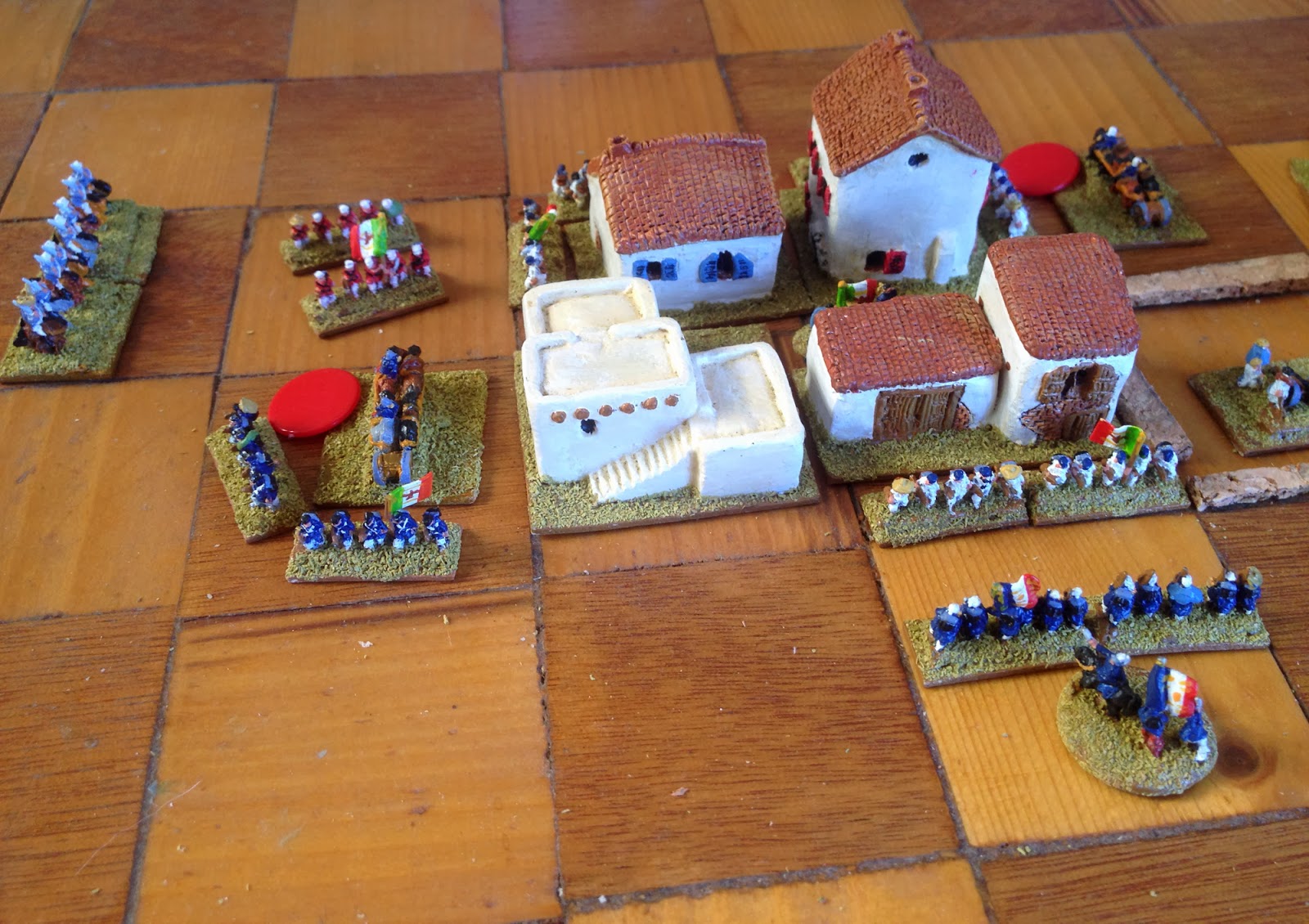 The Republicans organised a solid fighting line as their wagons retreated to safety. They got both wagons off the board, but had lost a couple of units by this stage, putting the score at 2-all. 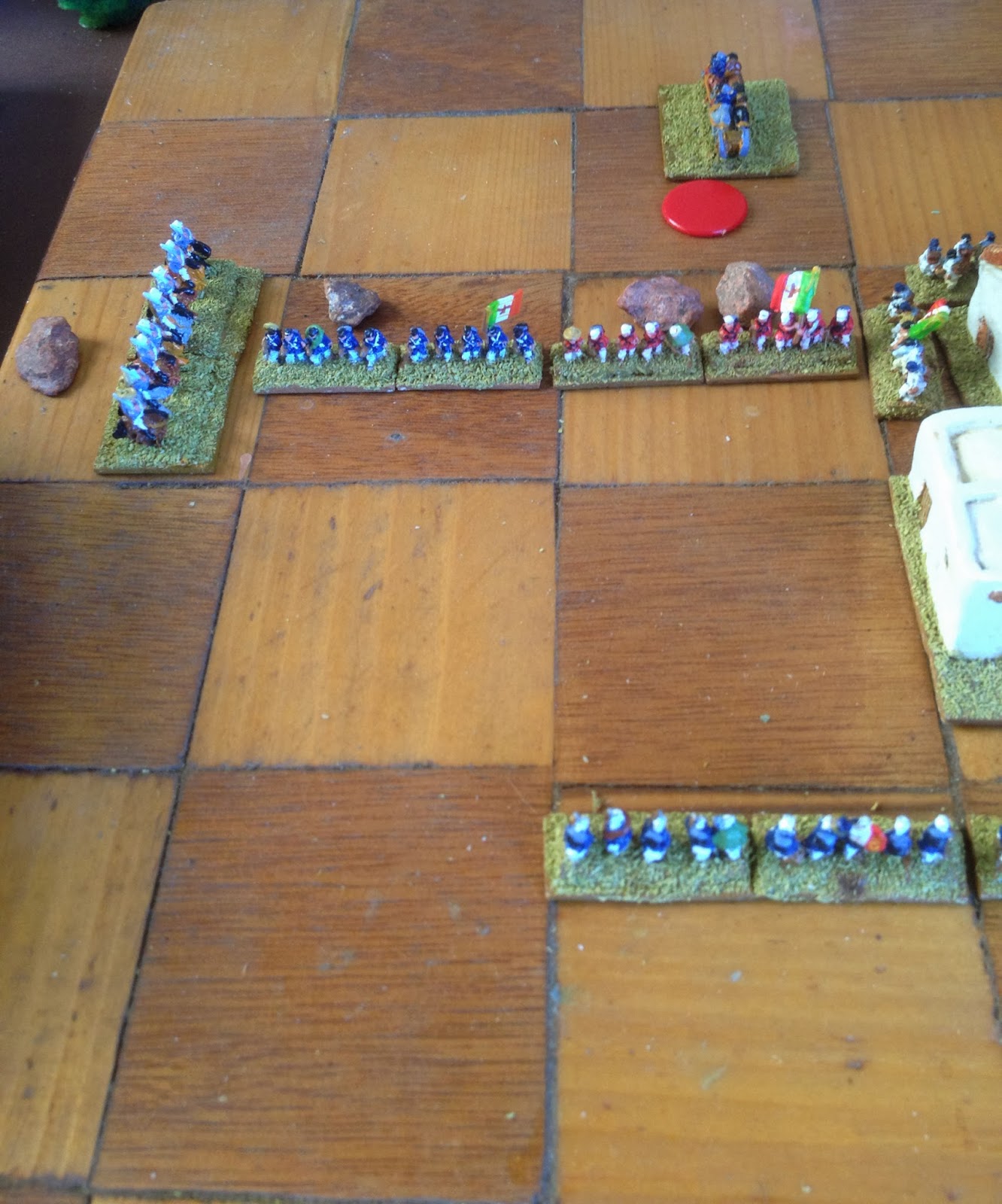 The French pushed into the village. 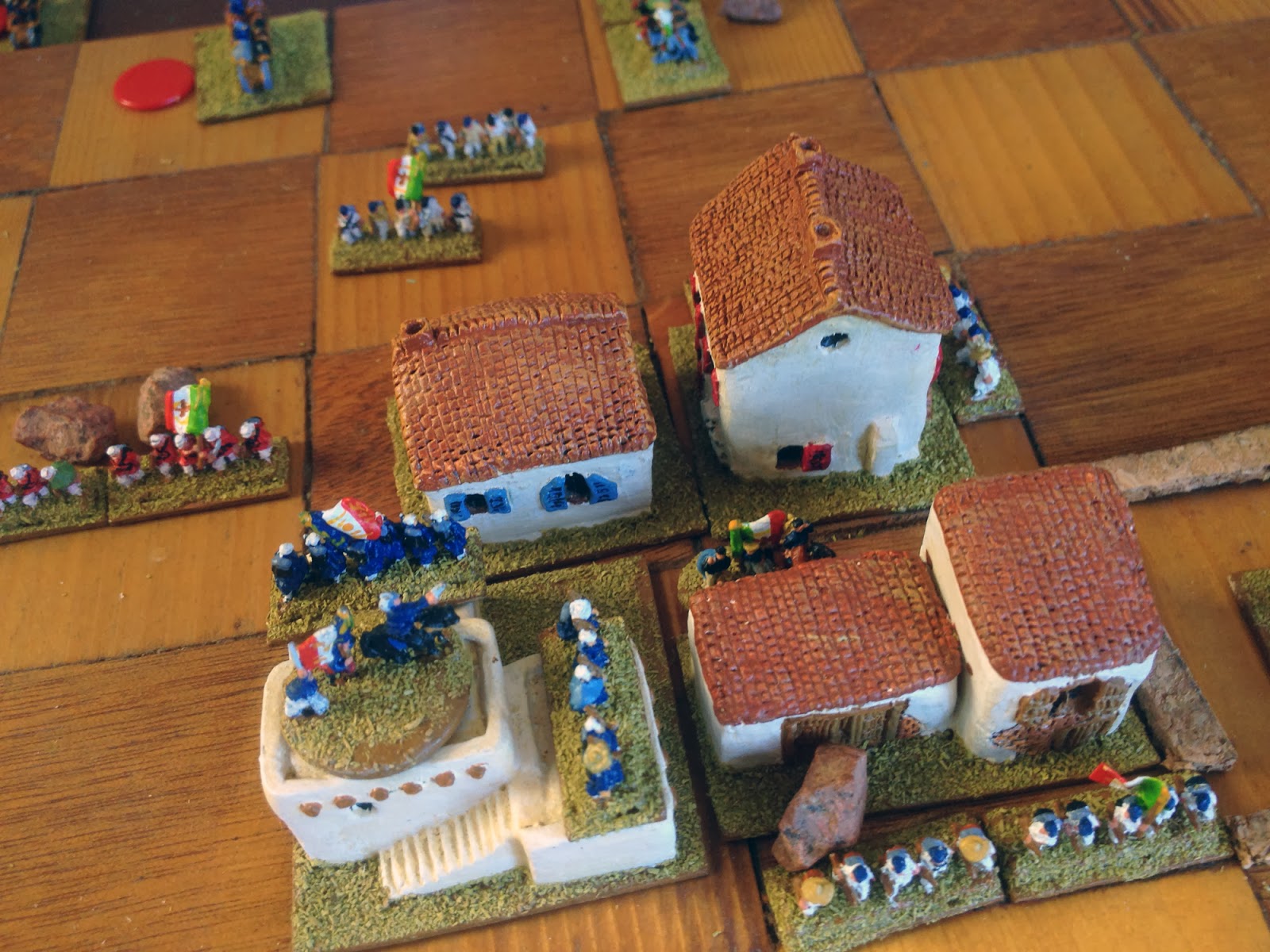 They also took the church, but the Republican artillery destroyed a French unit. Elsewhere they had routed the allied Mexican cavalry as well, so had four flags. However the French had destroyed four Republican units, so the game was still drawn. 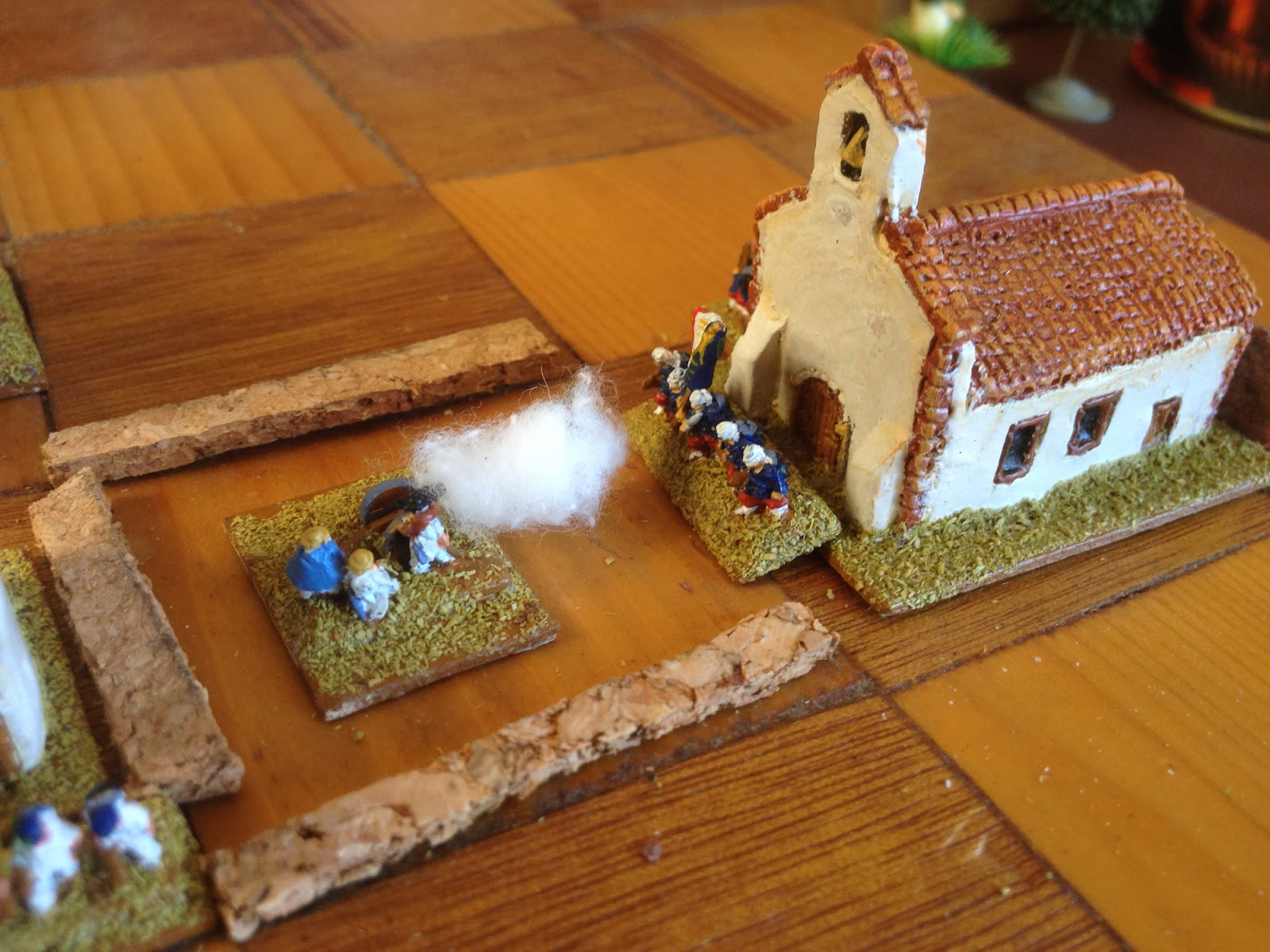 The French had the next turn. Their cavalry charged a Republican infantry unit, destroyed it and gave the French a narrow victory. 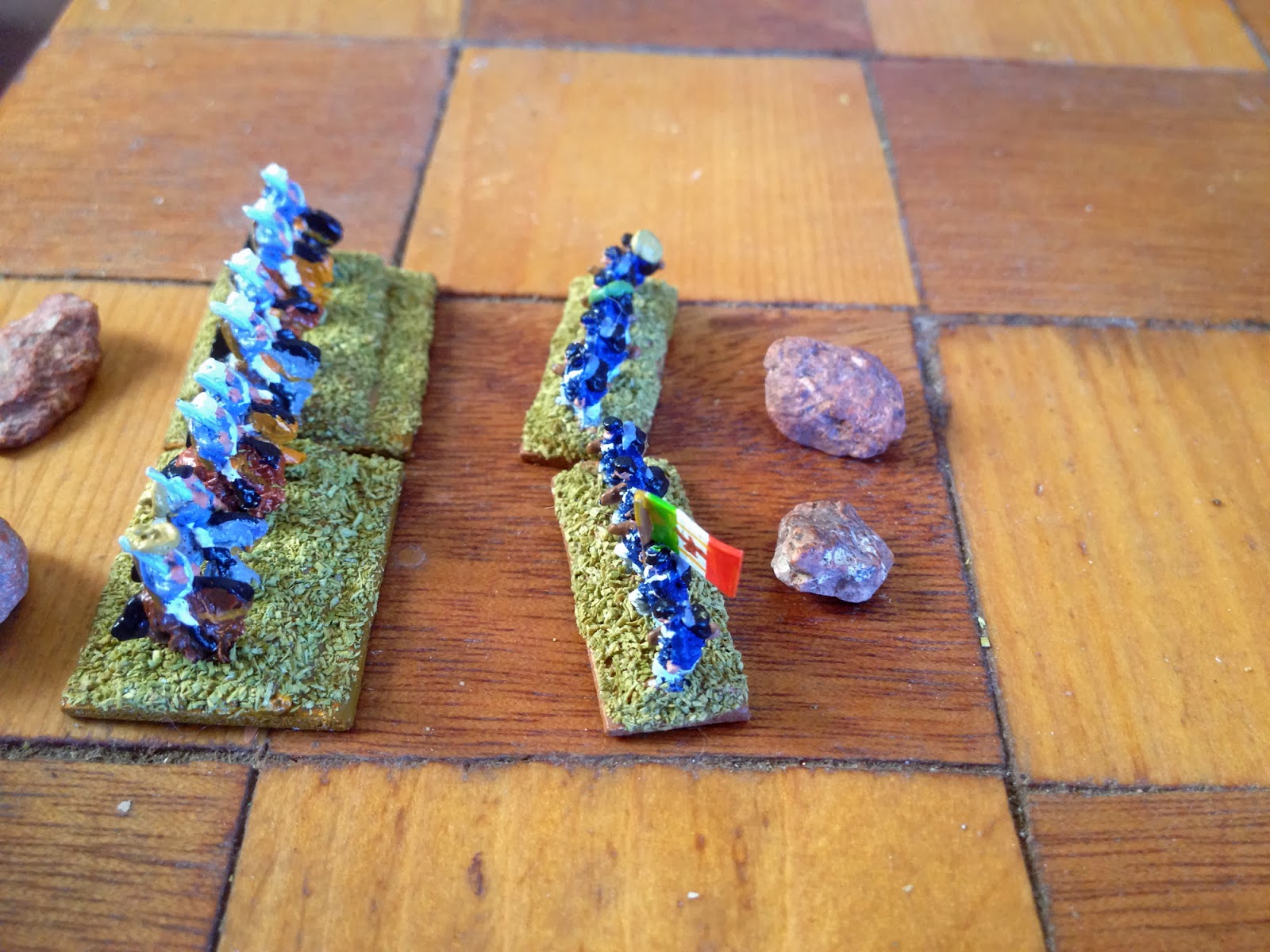 The final position, the Republicans hadn't inflicted as many casualties (although a few French units were looking sick), but getting the wagons off the board had helped a lot, even though it had cost them chances to fire their artillery. 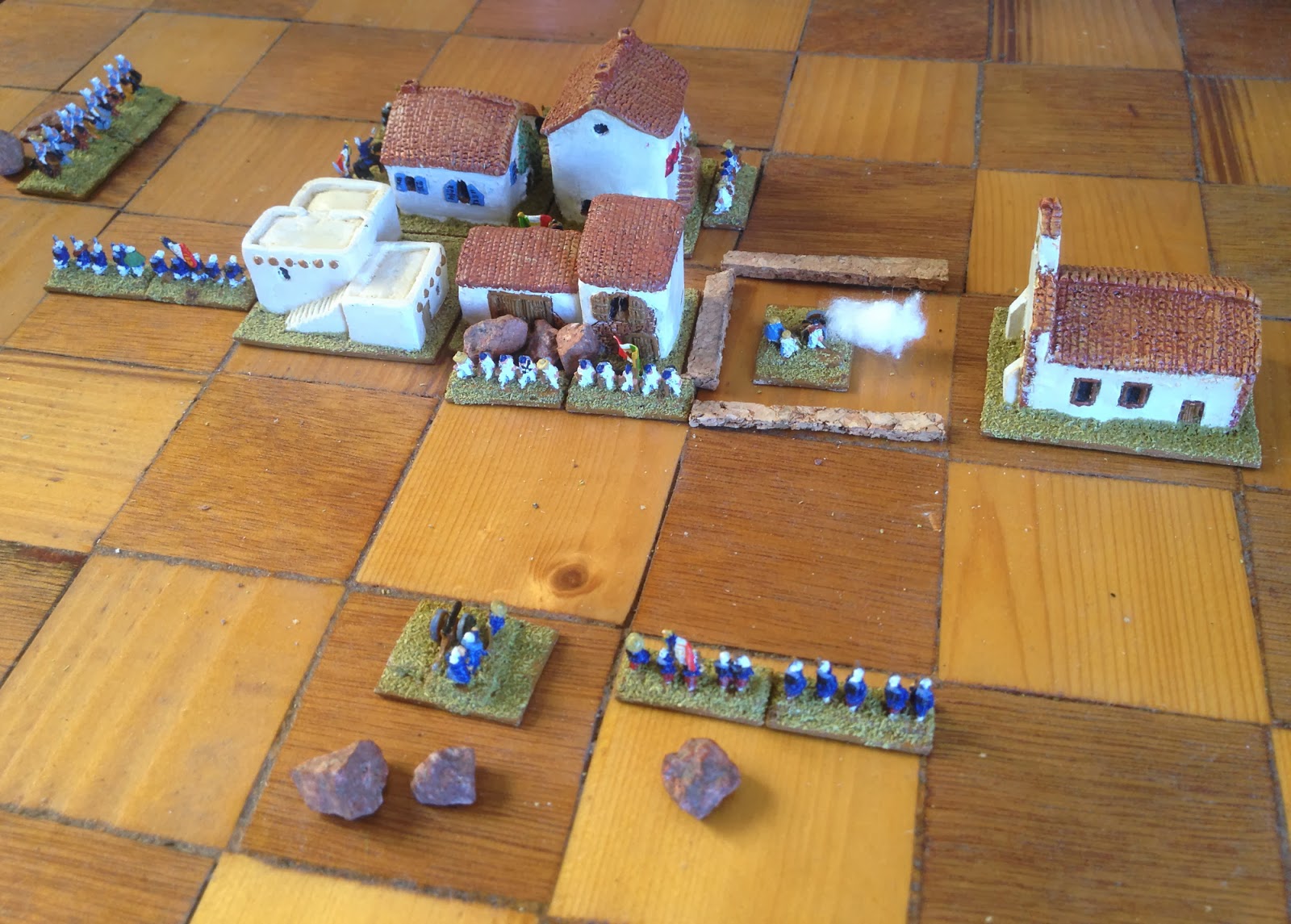 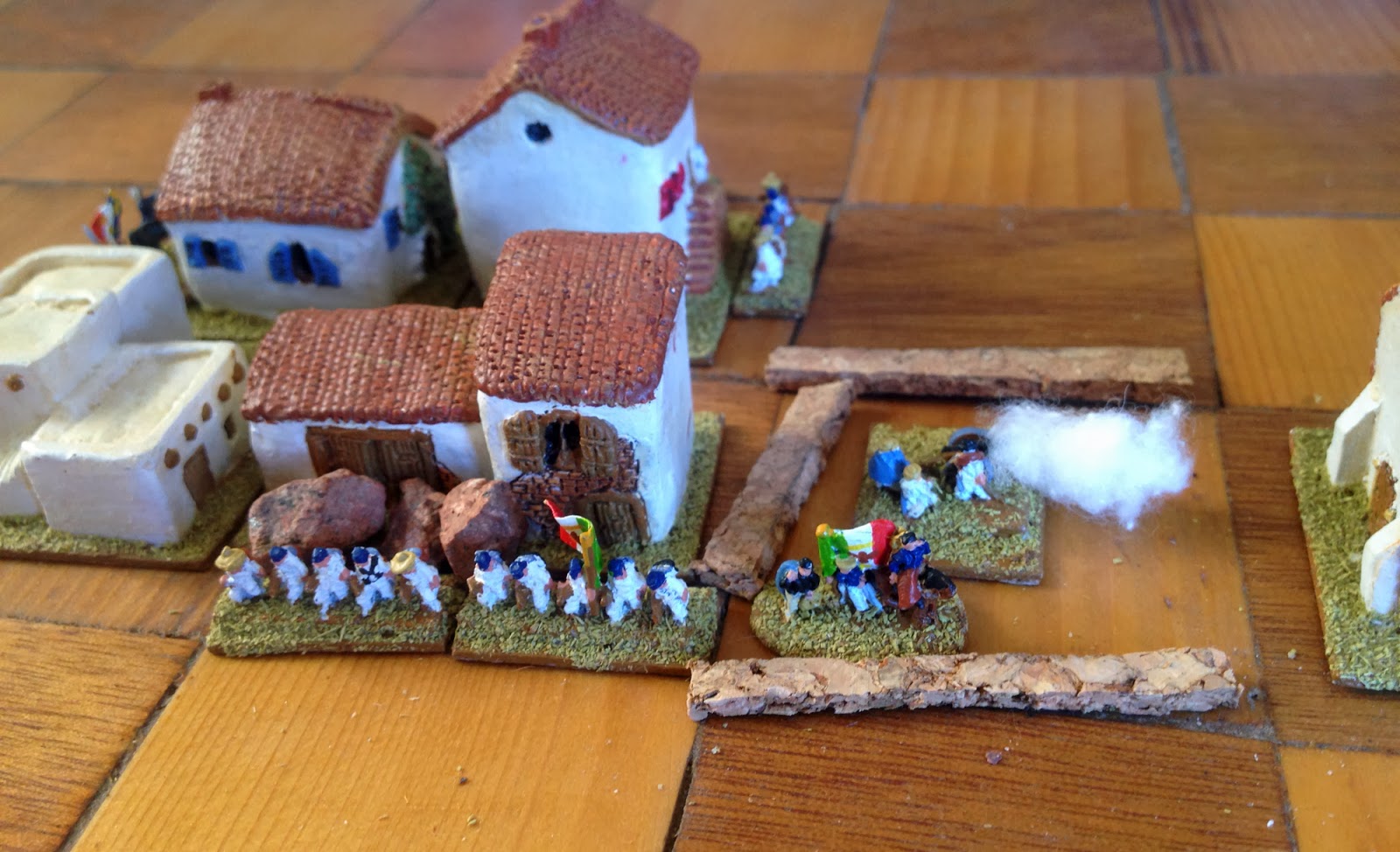 This was a fun game, and a lot close than I thought it would be. The Republicans are in a good position, but their activation rolls are never enough for them to defend everywhere The French  can generally keep up the pressure, and with a run of fives can really make a vigorous attack.

The charge rules seemed to work OK, allowing units to take buildings if they could win combats, and putting them in peril if they didn't. It also made cavalry more vulnerable, unless they were attacking a weak foe.